This is probably the biggest case of bolting the door after the horse has bolted in history.  Forget passing maritime safety regulations after the Titanic sunk, or disbanding Polish cavalry units after German Panzer tanks had arrived en masse.
Basically, I went to a Tweat Up event absolutely yonks ago then totally failed to write it up until now.  BUT it was acecakes so I'm going to share it all with you anyway.
On the very last day of the famed Hawker House, Tweat Up (the team that brought you Street Feast London and who are now bringing you Model Market in Lewisham and Riverside Feast at Battersea Power Station) held their second Taco Wars (imaginatively entitled 'Taco Wars 2').  It was awesome.  For a modest fee we were invited to gobble down eight tacos and slurp a cocktail and a beer, rounding the day's munching off with a bowl of spectacular gelato, before casting our ballots for the best.
They'd got the place just right.  Hawker House was clearly a great venue generally, but a lot of thought had been put into making it somewhere cool to hold a taco creating contest – from the brightly coloured papel picado (famed Mexican tissue paper banners, the motifs being chiselled out of piles of paper) hanging from the ceilings... 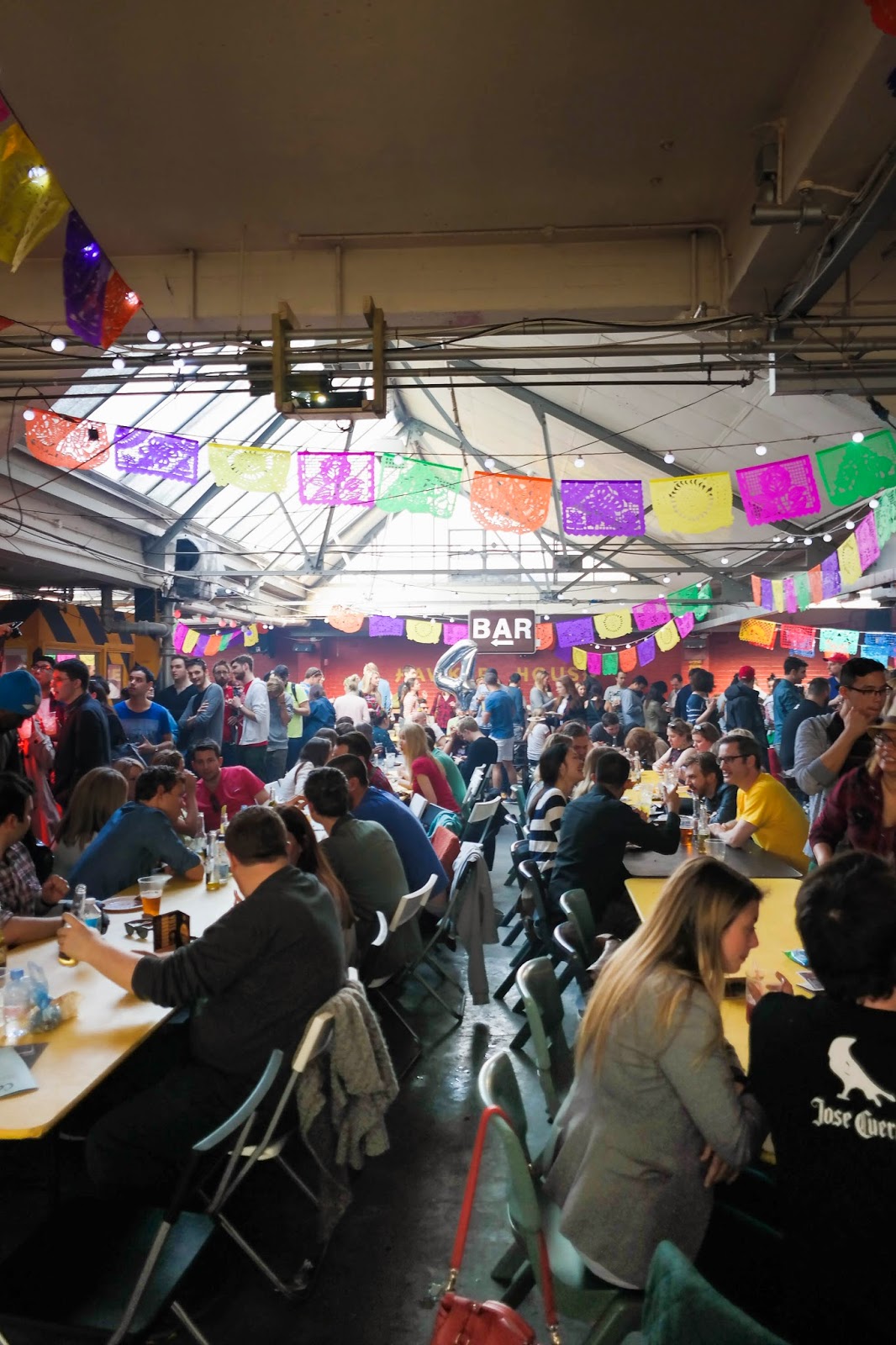 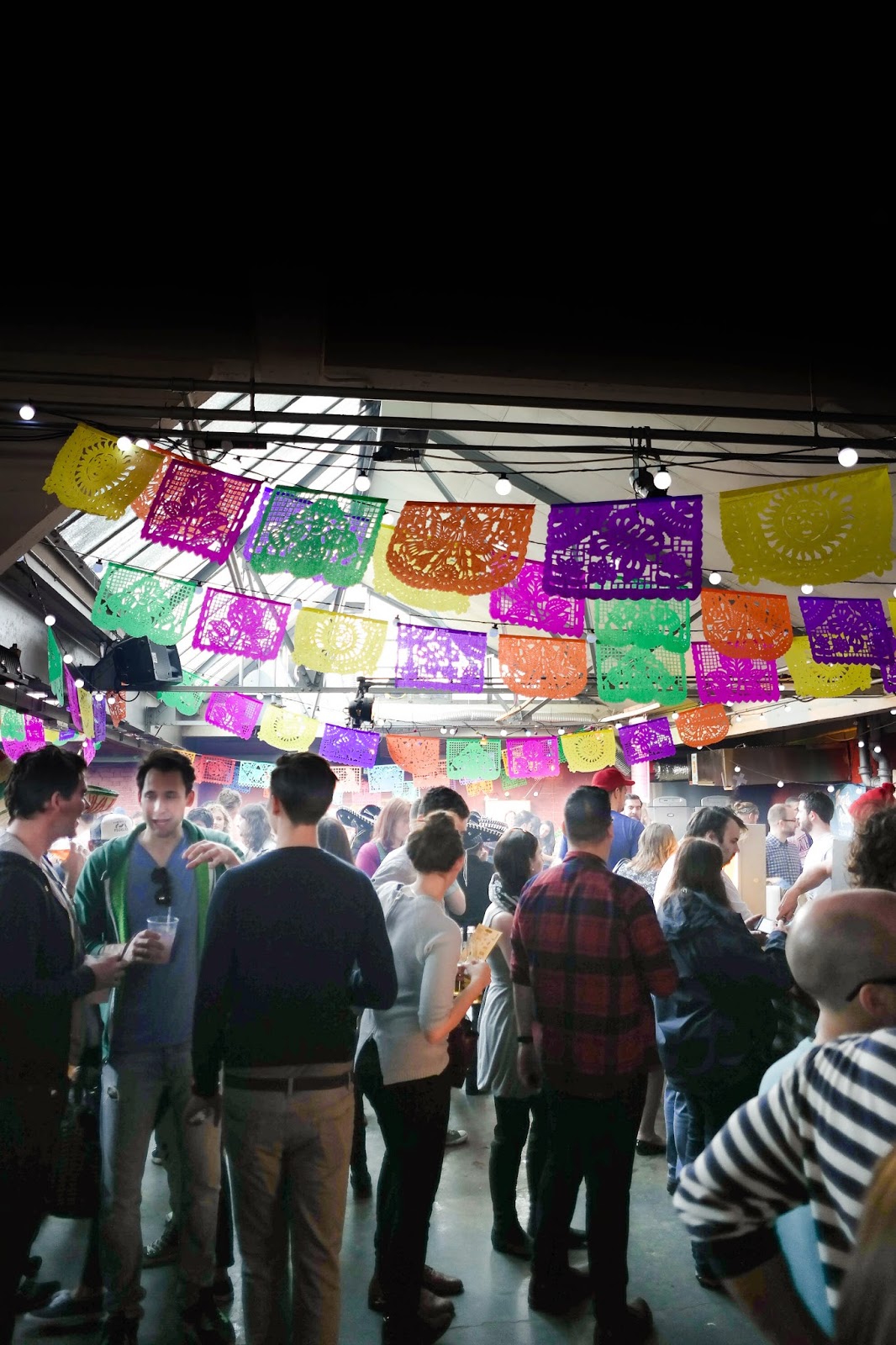 ...to the mariachi band that strummed and sung their way through the day. 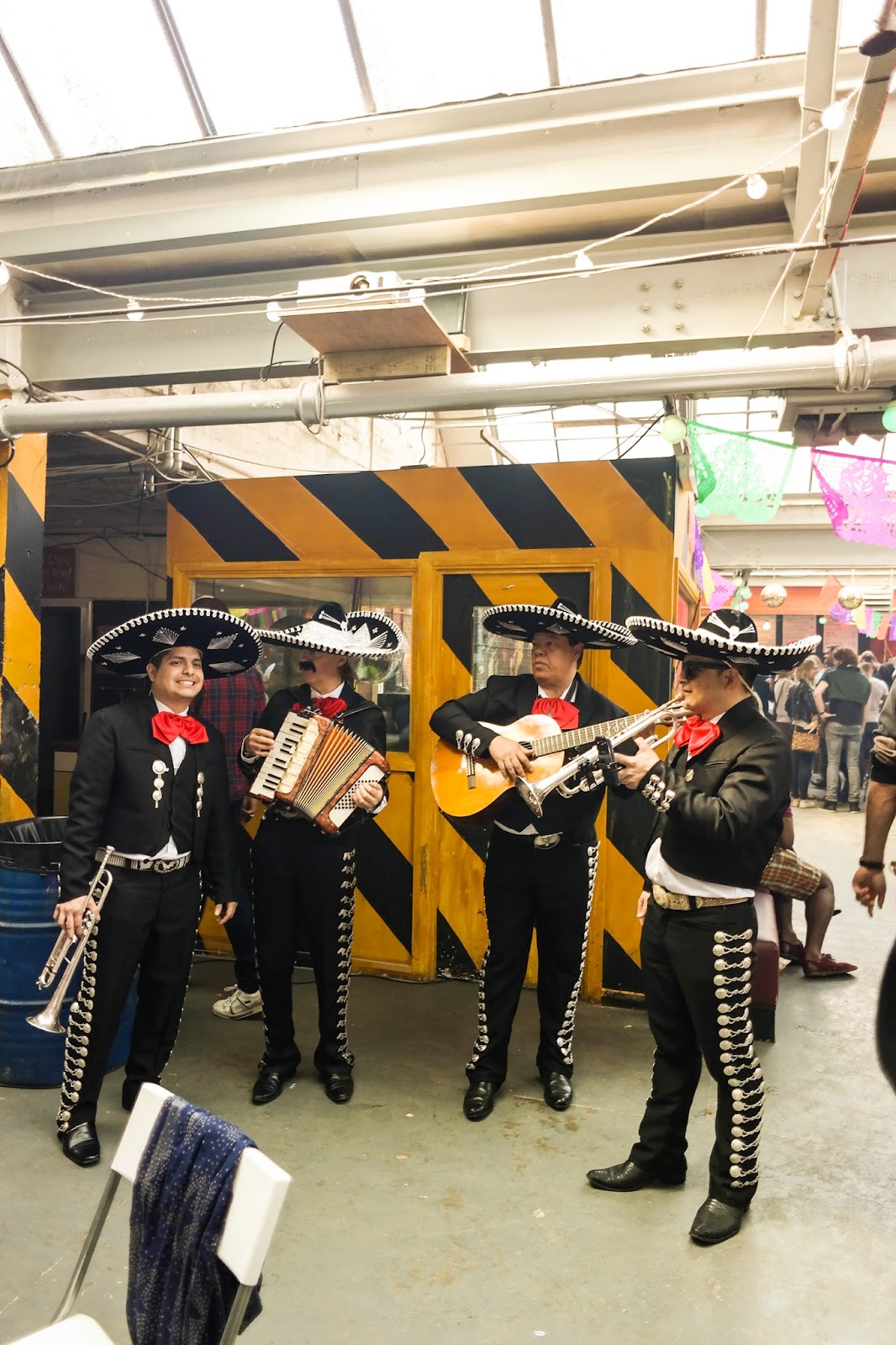 But let's not kid ourselves, right?  We're here for tacos.

Let's start with Rita's contribution.  It was a soft taco filled with pigs head, belly and trotter, and served up with a burnt spring onion crema and blood orange pico.  Very good – no complaints there. 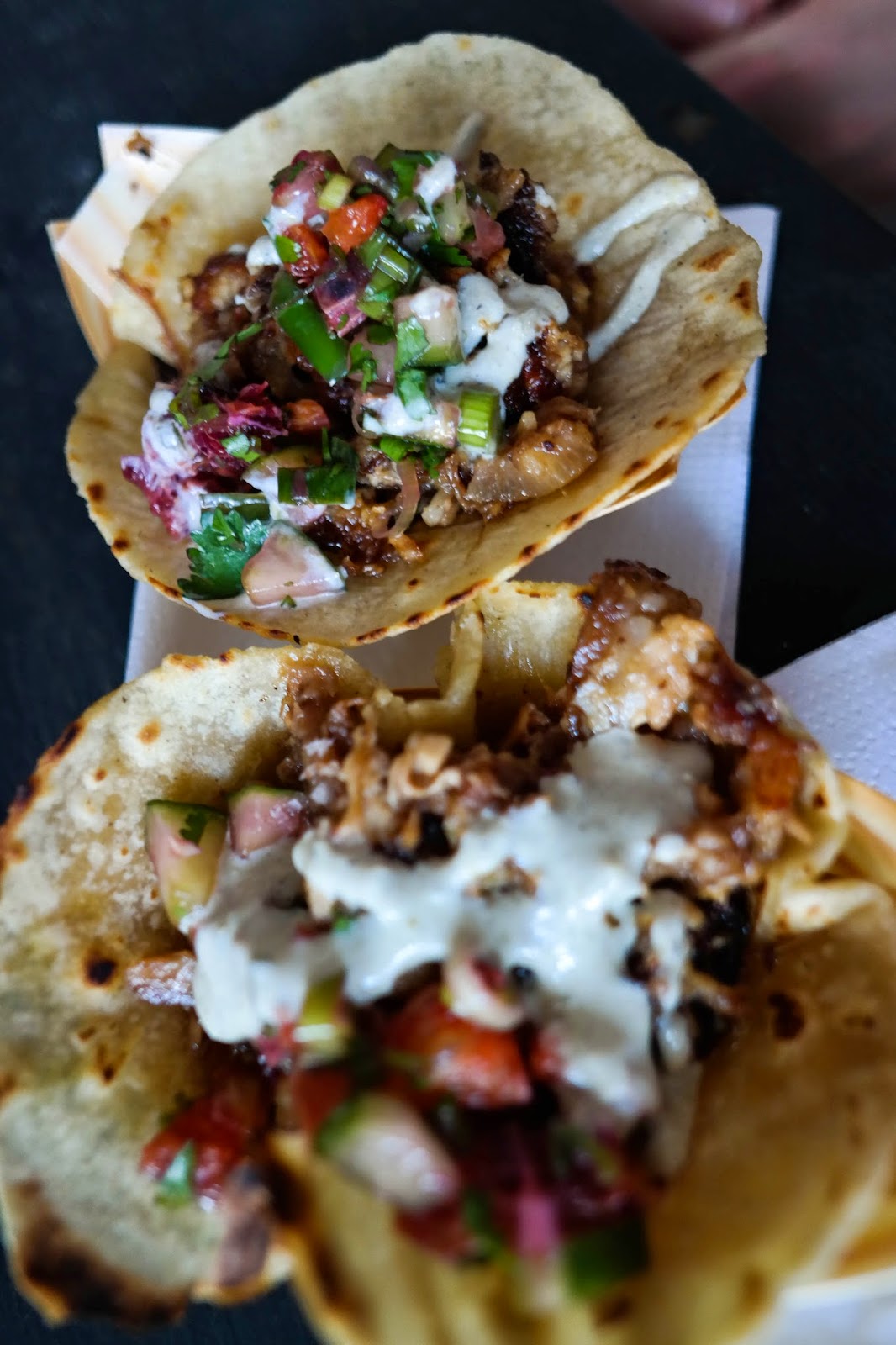 Santo Remedio offered us an unusual (and ballsy) combo: chargrilled octopus marinated in Pasilla de Oaxaca chillies with black beans, yerba santa and serrano aioli.  Raising the bar on the taco shell front, SR served their taco up on an avocado leaf tortilla.  I was a little disappointed here – not because there was anything wrong with it, but because it just didn’t meet expectations.  I mean, Octopus! Avocado tortilla!  Serrano aioli!  Excitement!  But sadly no.  Just... OK.

By about this time we were getting thirsty so decided to cash in our chips for a blood orange margarita.  Very tasty – if perhaps a little weak. 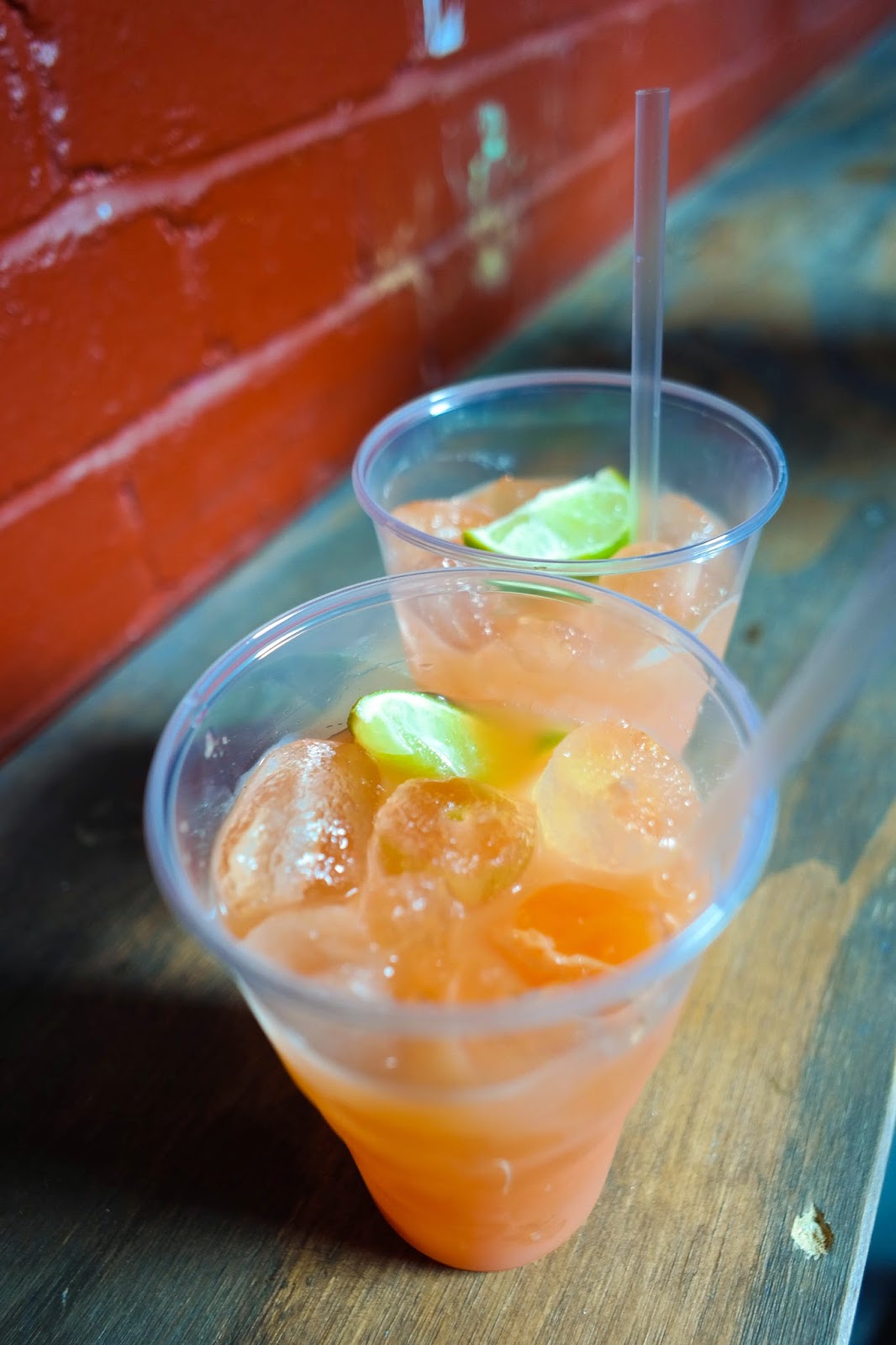 Next up: B.O.B.'s Lobster.  The only vendor I'd had previous experience of (and about whom I have written more here, in another spectacular display of post-horse-bolting door-closing).  They served up finely diced Ahi tuna with wasabi guacamole, chipotle crema, Asian slaw and sesame seeds.  Another attempt at a new take on the humble tortilla, theirs was a wonton shell, deep fried to crispiness. 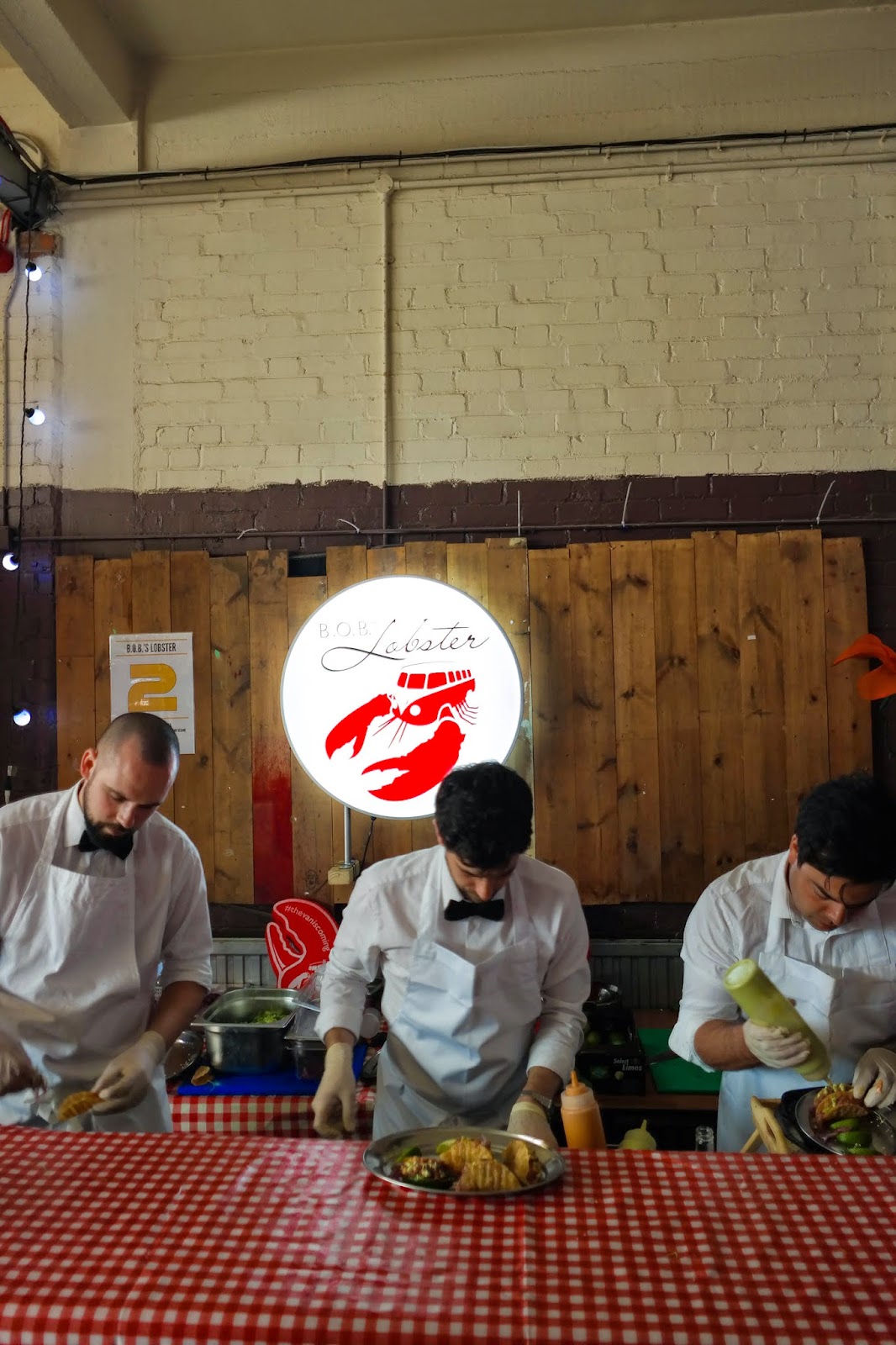 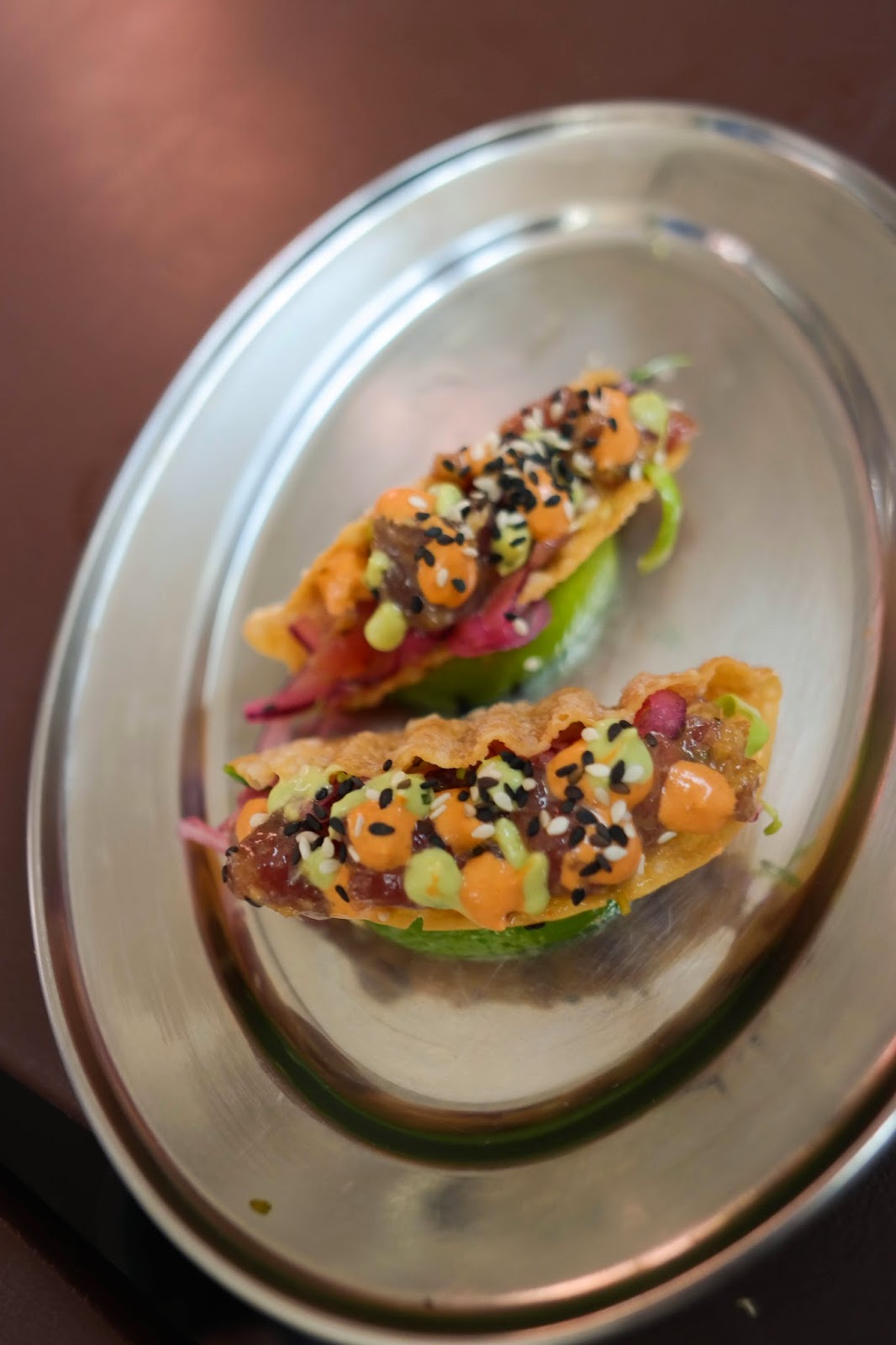 OK, so this was good. It was very tasty. A lovely balance of Asian flavours - wasabi, soy and sesame - perfectly complimenting the tuna.

Luardos (the folks behind those tremendous Jesus and Mary vans than seem to pop up at any street food fest in town) offered us grilled skirt, salsa roja, supersweet onions, coriander and lime in a homemade corn tortilla.  This was very good.  Very good indeed.  The 45 minute queue for the stand was not, but heh.  This was possibly the most authentic taco of the lot – it took me straight back to eating tacos from the street vans in Puerto Vallarta a decade (and more) ago. 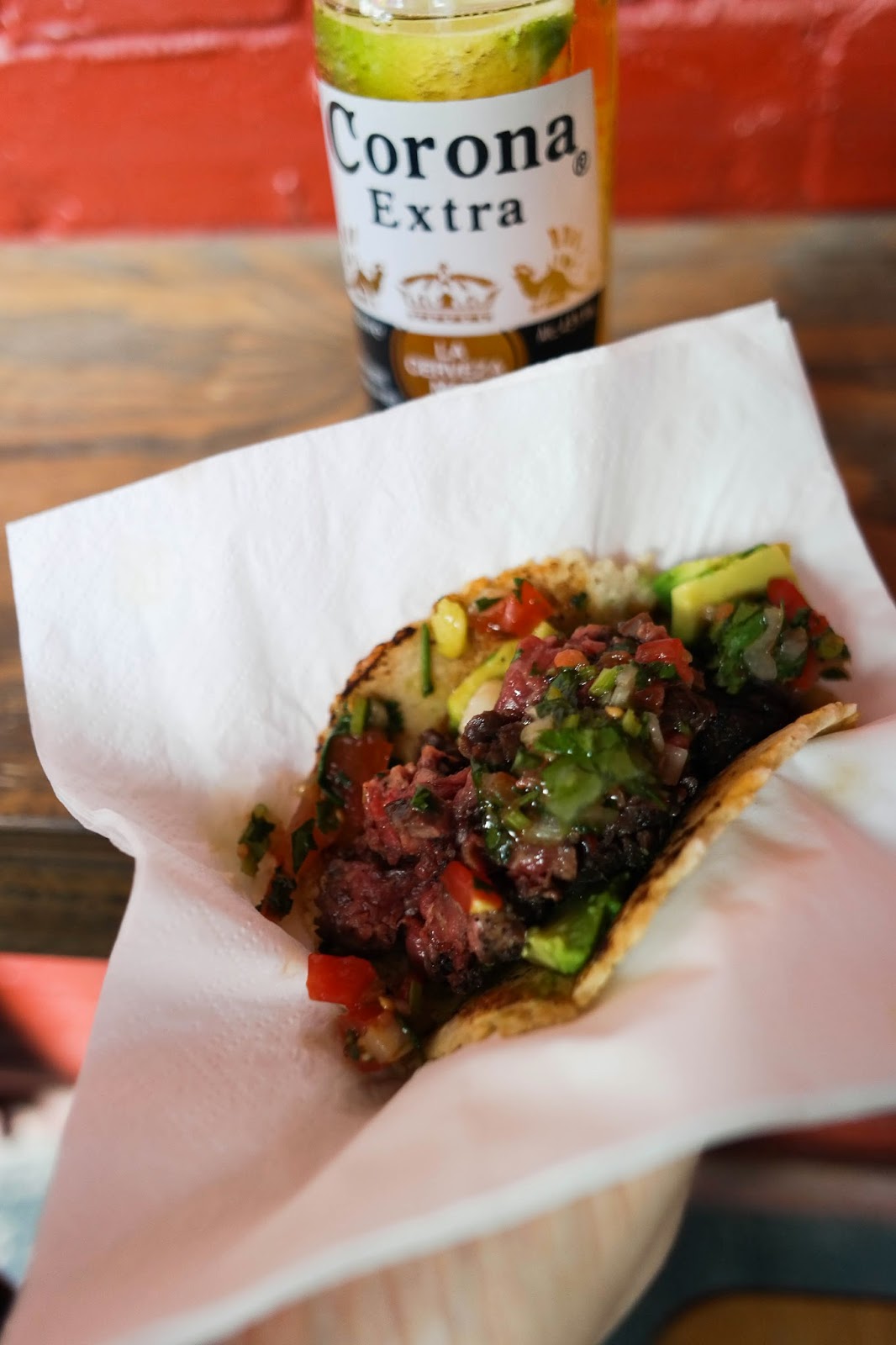 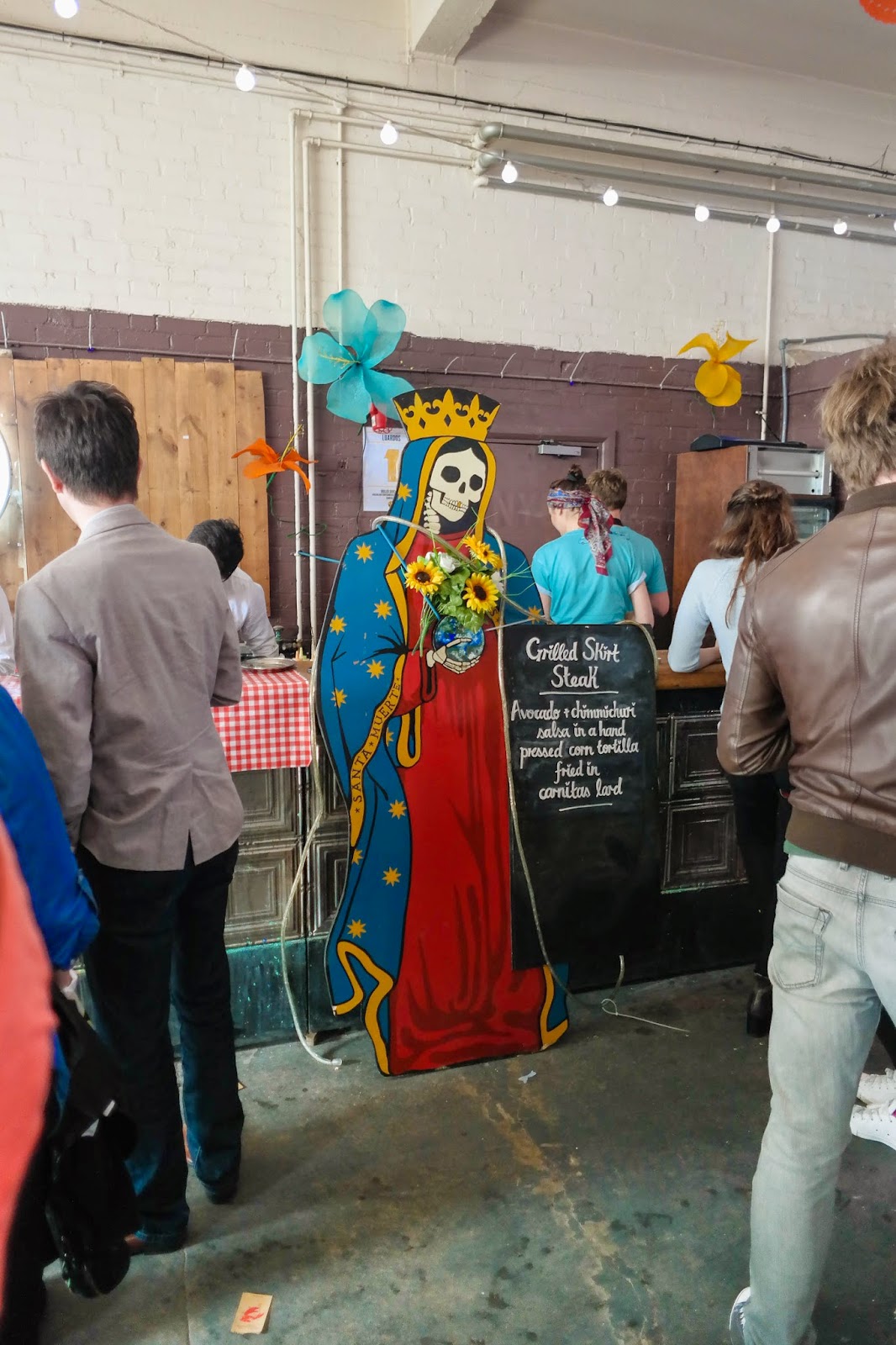 Benitos Hat, who own a string of (justifiably) highly successful burrito shops about town came up with their own quirky number: pork belly, crispy chicharrón (a bit like scratchings), shaved fennel, lime, roasted apple and habanero salsa in a homemade corn tortilla.  This had so much going for it – a very carefully thought through collation of flavours and textures.  Unfortunately, just thinking about it is not enough.  I had to wonder if anyone had actually tried this – seriosuly – because, whilst it tasted alright it was incredibly greasy.  Really, really oily.  Which is not good.  I desperately wanted to like this, but just did not.  Sorry. 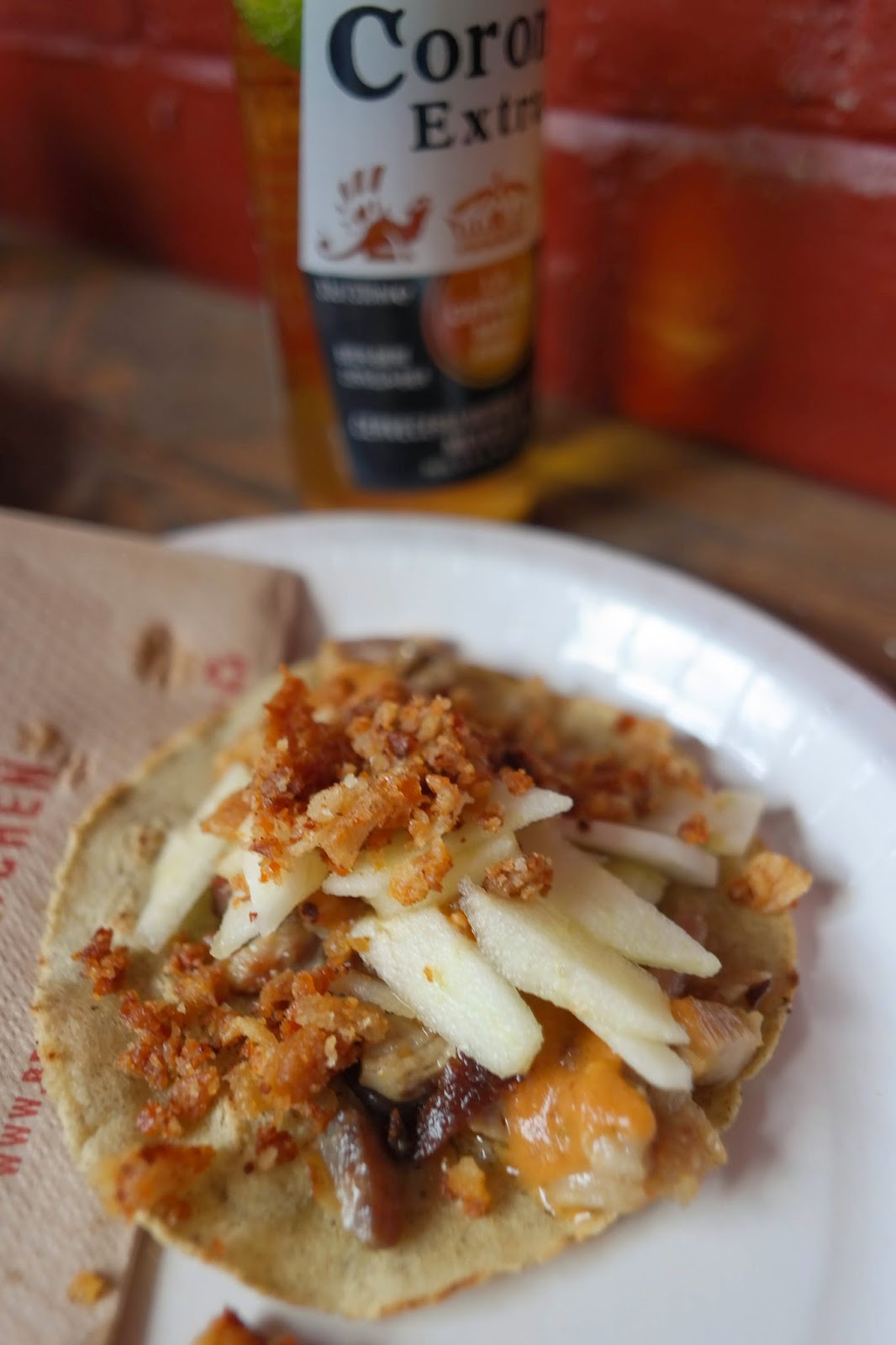 Kimchinary are basing a lot on the current hipster food fetish for Korean BBQ – and rightly so, given (a) its popularity, and (b) the fact that it's really good.  So I was expecting a bit of kimchi (you know, that red stuff that seems to be piled on top of everything hipsterfoodie these days).  What I wasn't expecting was a taco of beer braised pork belly, pickled mustard seeds, Korean pear salsa, oyster kimchi, gochujang and 'pig crunch' on a smoked pork fat and sesame tortilla .  Because that's a lot of different pig bits.  In fact, it's a lot of a lot, and we've seen already that that way can lead to madness.  Fortunately, however, they had got it just right.  A very good – if rather different – taco. 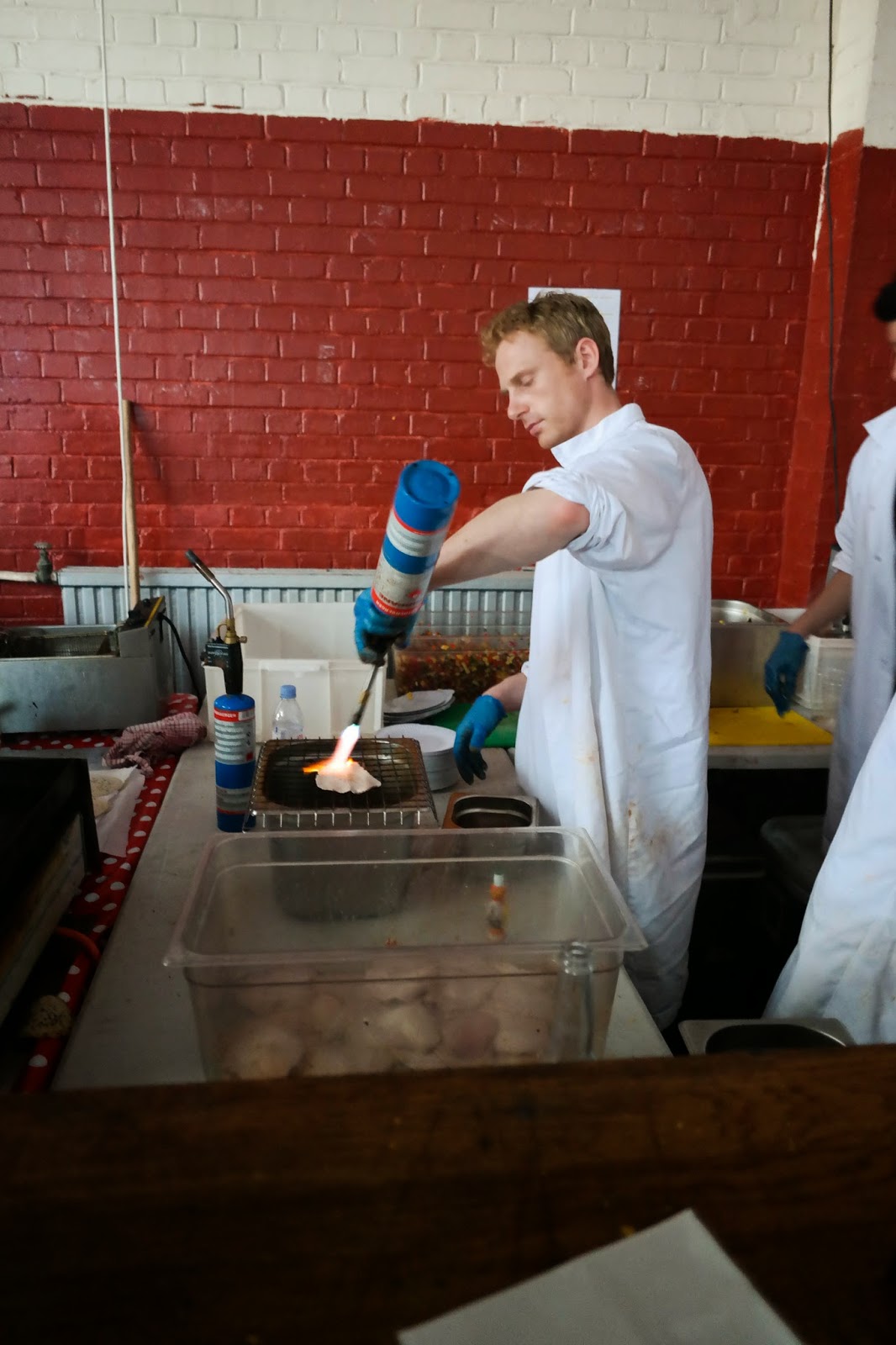 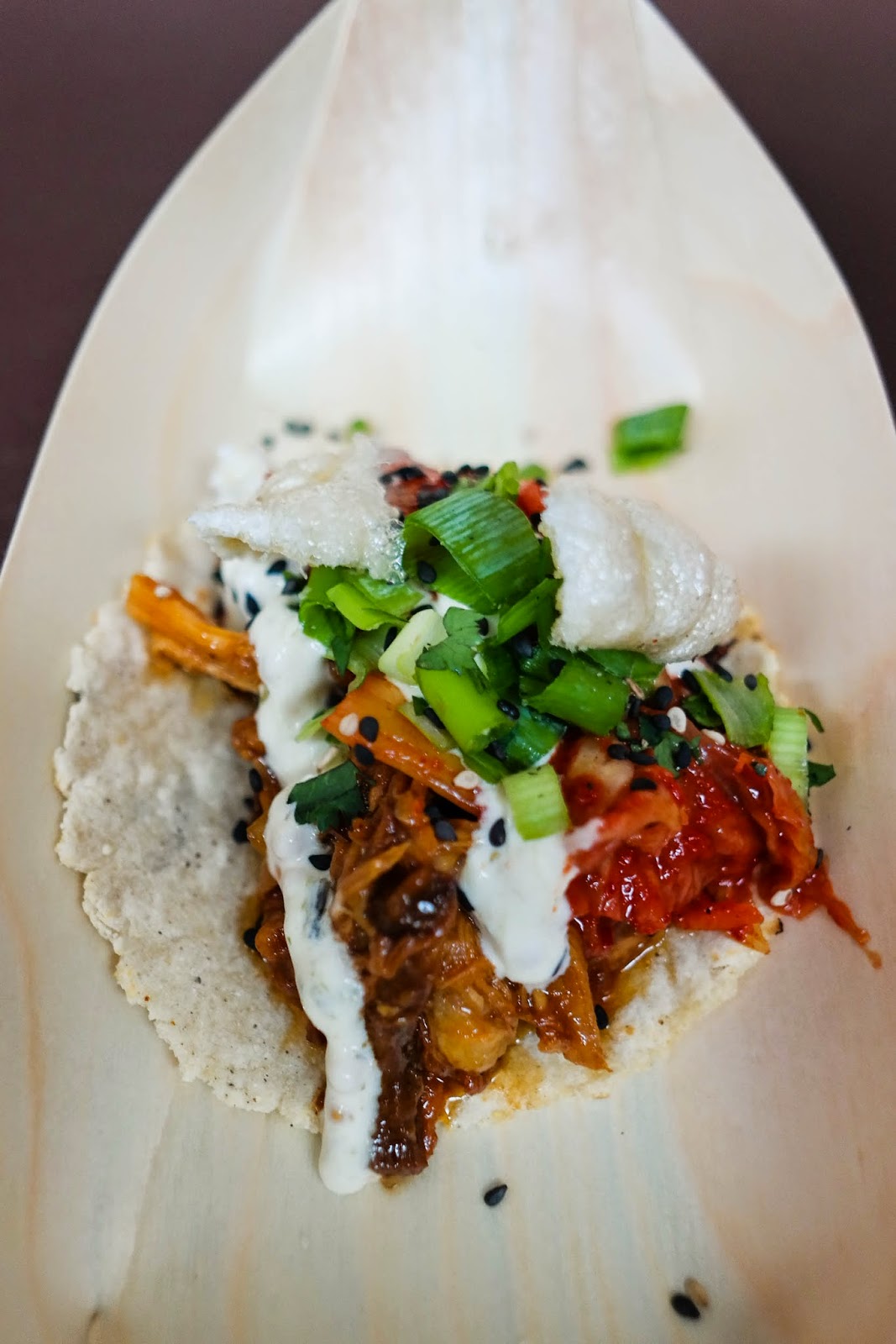 And so we come to Breddos. 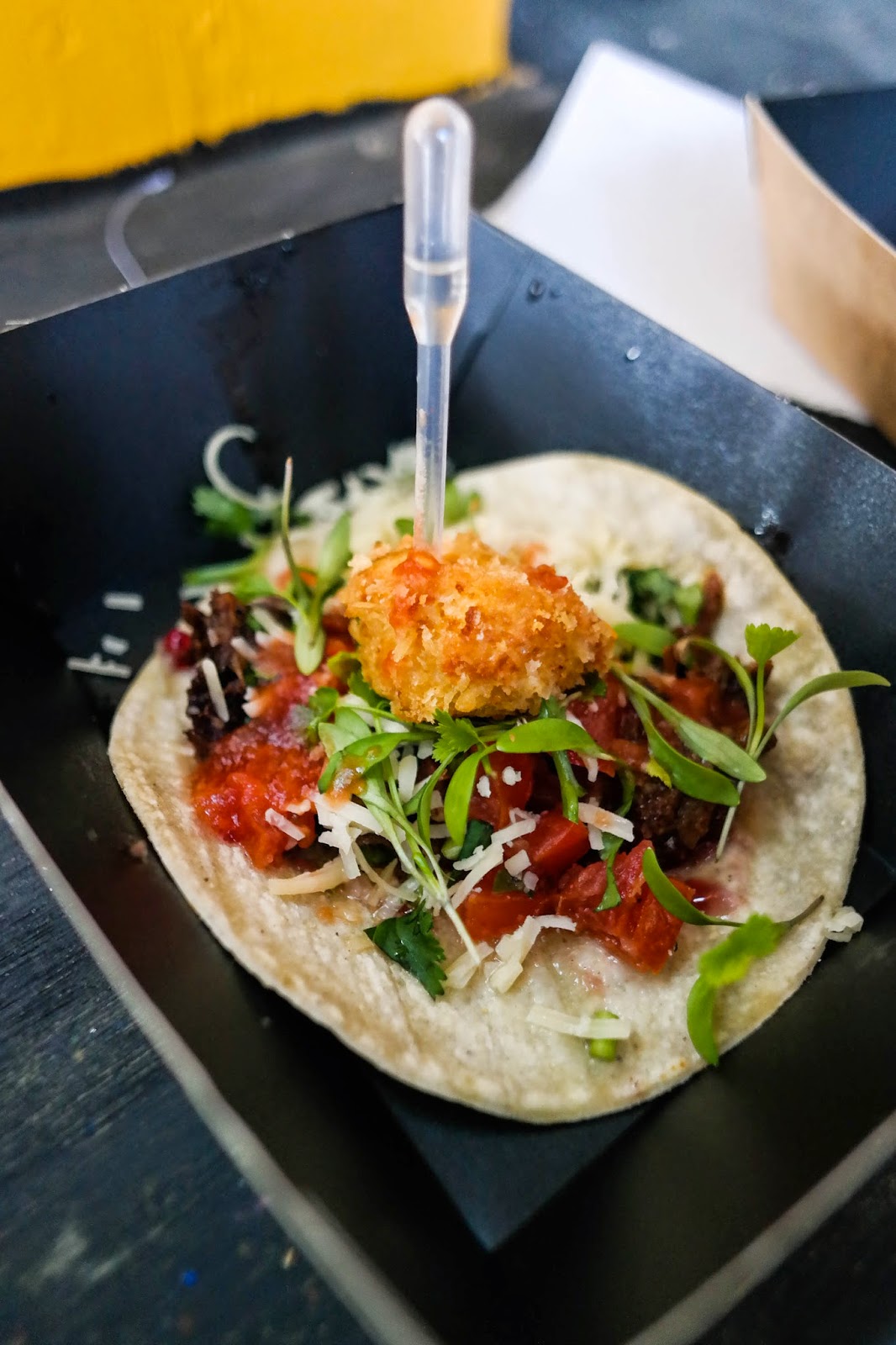 I don’t really know what to say about this.  Their offering consisted of chipotle and bone marrow roasted short rib, barbecued Guinness-marinated brisket, and smoked cherry marmalade.  It was wrapped up in a homemade beef dripping tortilla.  It was served with a pipet of naga chilli oil (the hottest chilli in the entire world).  It was accompanied by a chilliback – a shot of silver tequila with a shot of habanero pickling liquor (spicy, sour, chilli, vinegary and sweet all at once).  It was, in short, one of the most unbelievably good things I have ever eaten in my entire life.  Nothing short of that.  They won overall, after all the votes were counted (including GrubsterBoy's and GrubsterGirl's) and I'm pretty sure that I can say that it was a well-deserved victory.

Breddos have just opened up a new restaurant.  Expect a review coming soon.