This is a favourite simple supper of mine.  You could leave out the sausages and/or throw in some crème fraiche and parsley if you like – it’s really a fairly flexible feast.  But I generally have a real thing for pasta, especially in the colder, wetter months.  When working late and I cannot be bothered to do a big cook, this is perfect.

This feeds two, but could easily be halved. 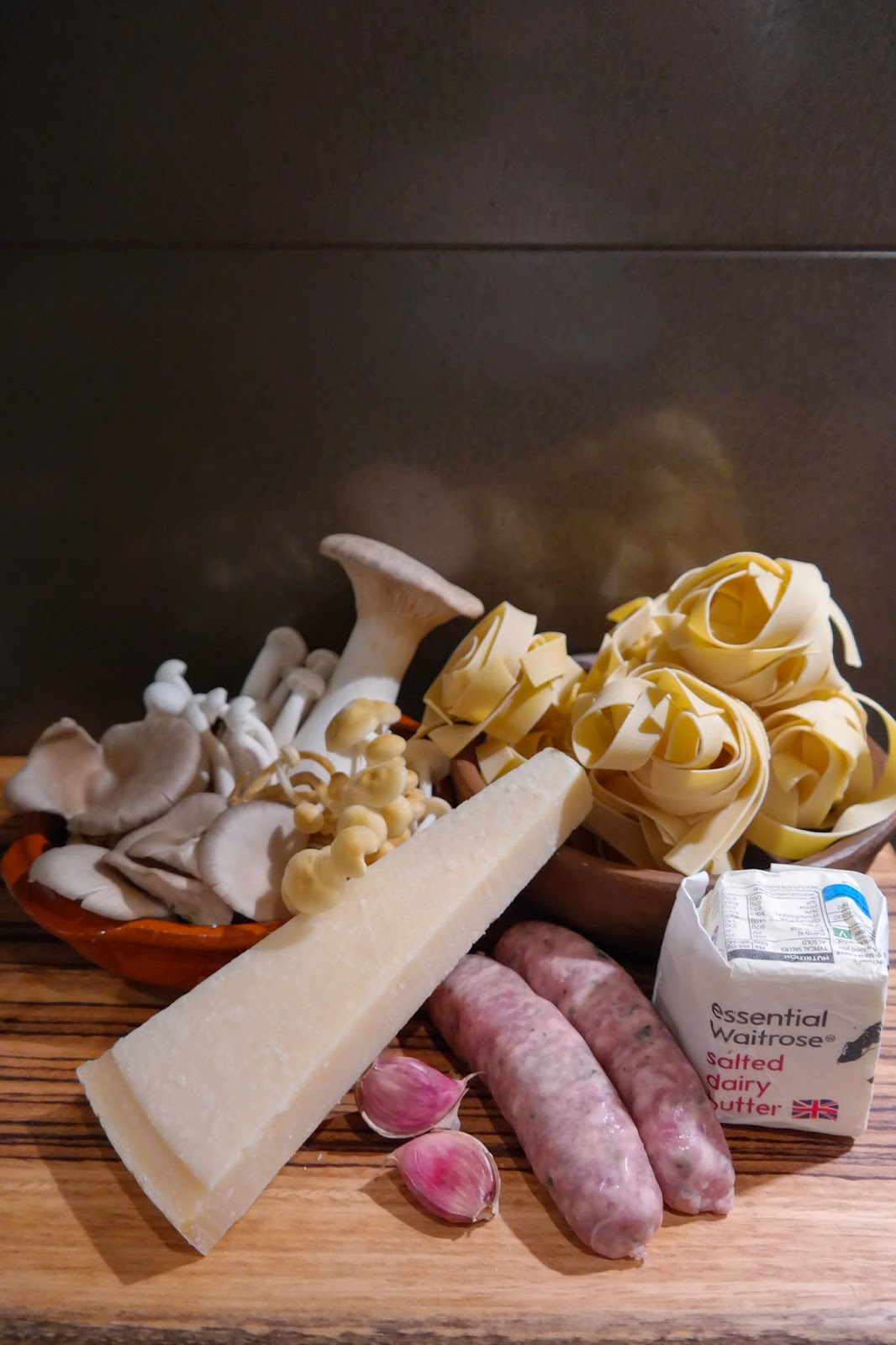 I’ve used some speciality mushrooms here, just because Sainsbury’s had them in when I was shopping.  You can use anything really, but I recommend portabello if there’s nothing particularly exotic about. 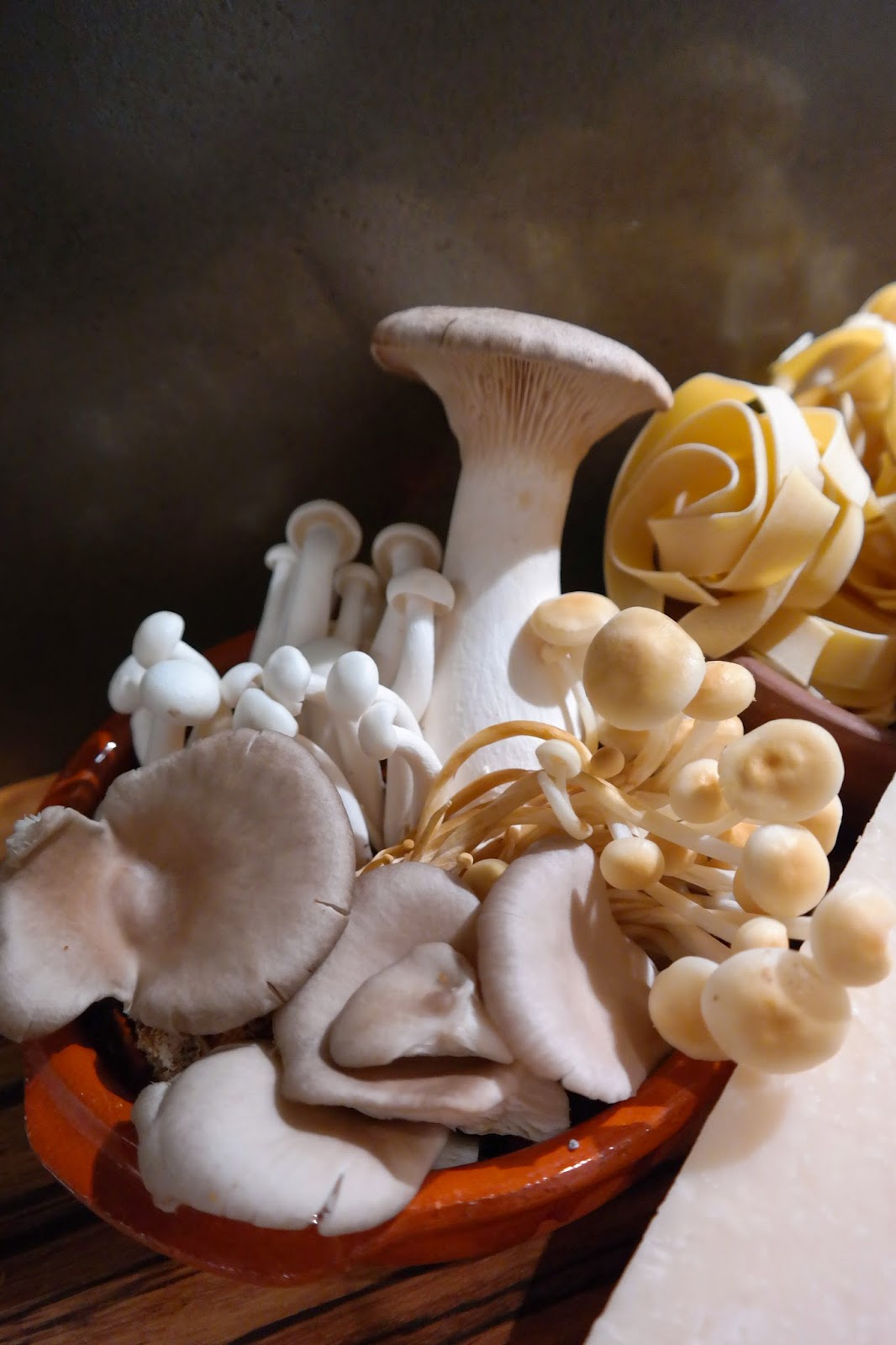 It’s probably a good idea to get your pasta water on from the word go.  The dish doesn’t take long to make, and you want everything to be ready at once.

Start by prepping the mushrooms – you want them sliced / separated into ribbons.  How you do this will really turn on what mushrooms you’ve bought. 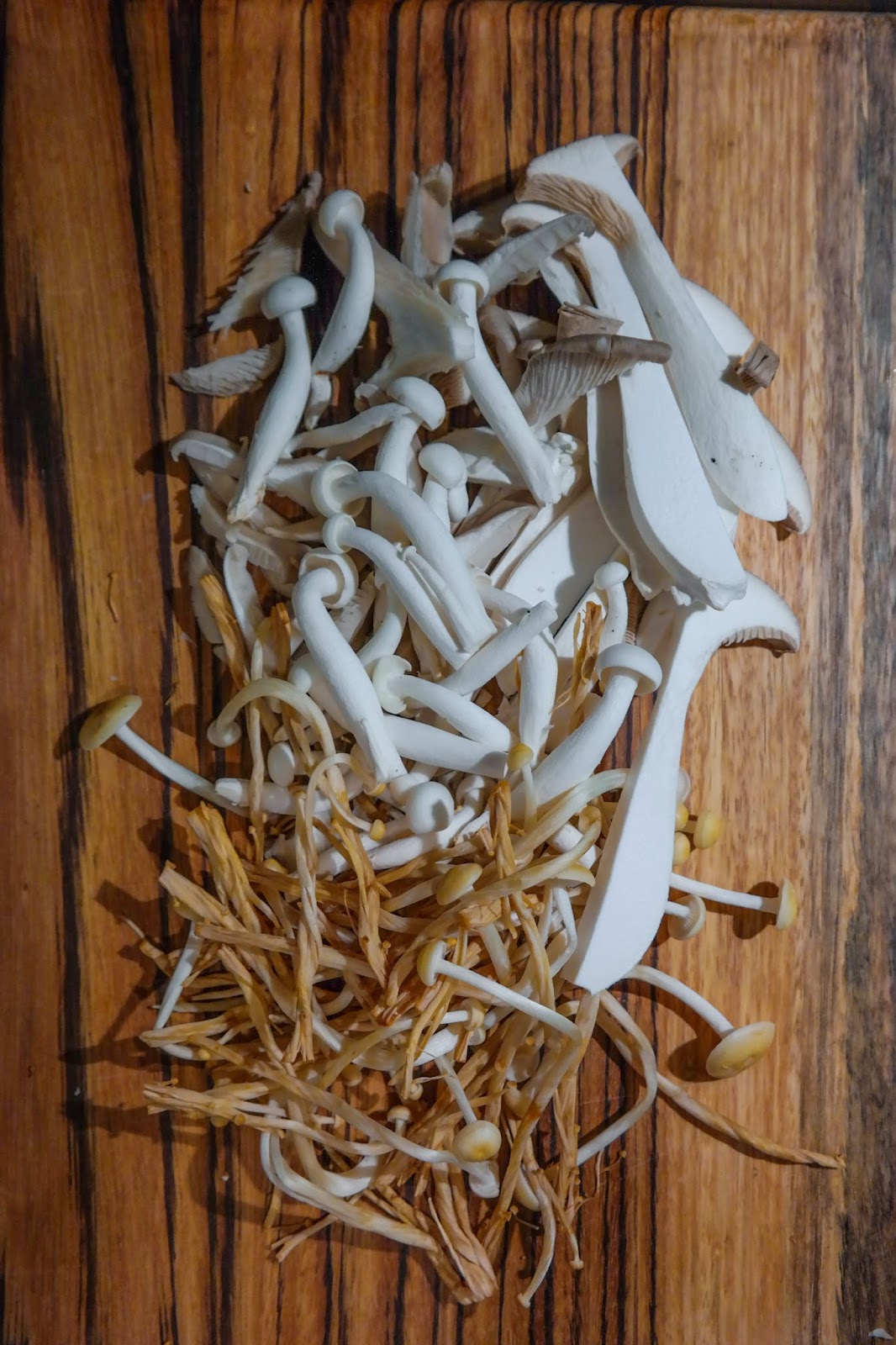 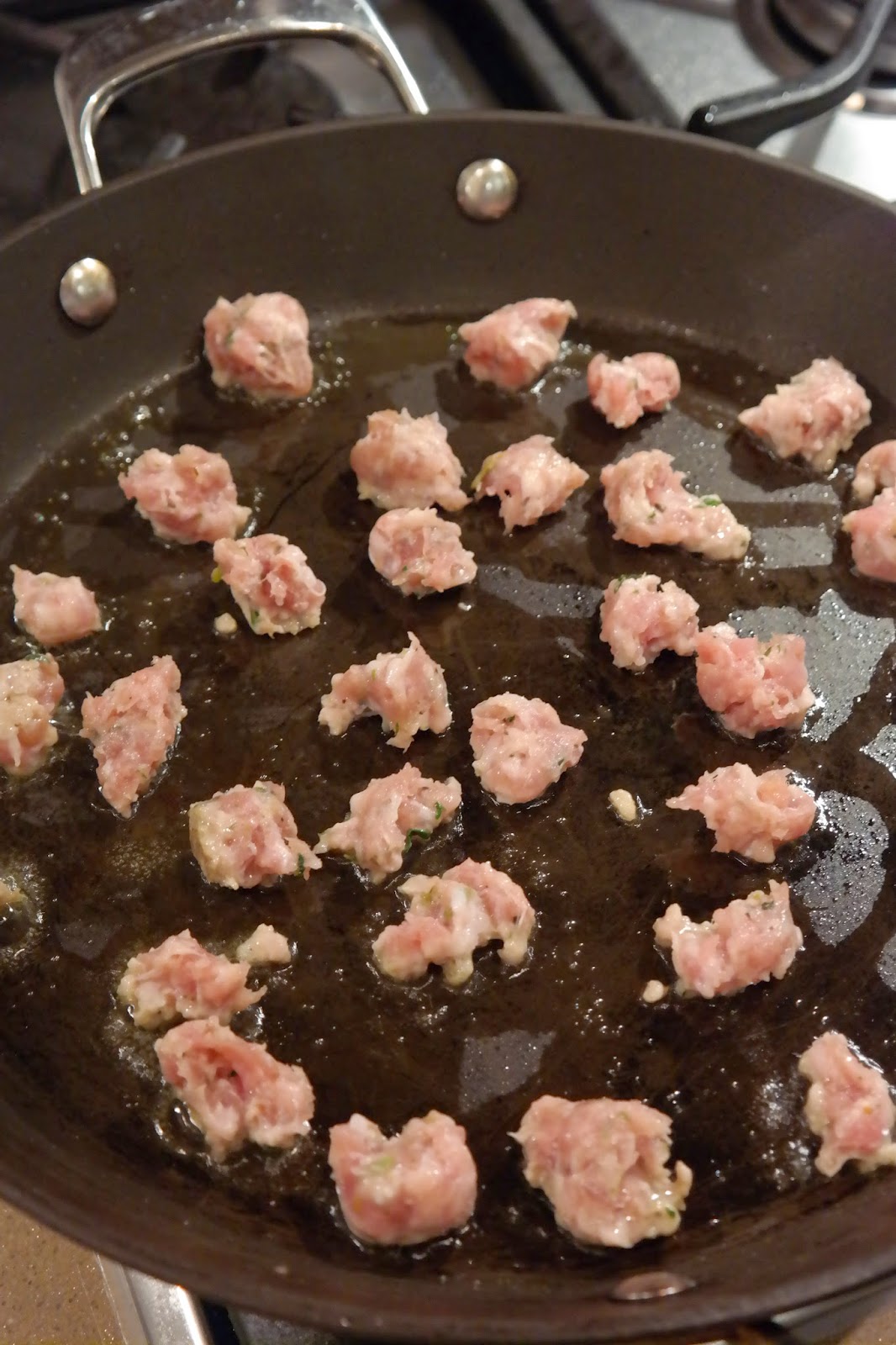 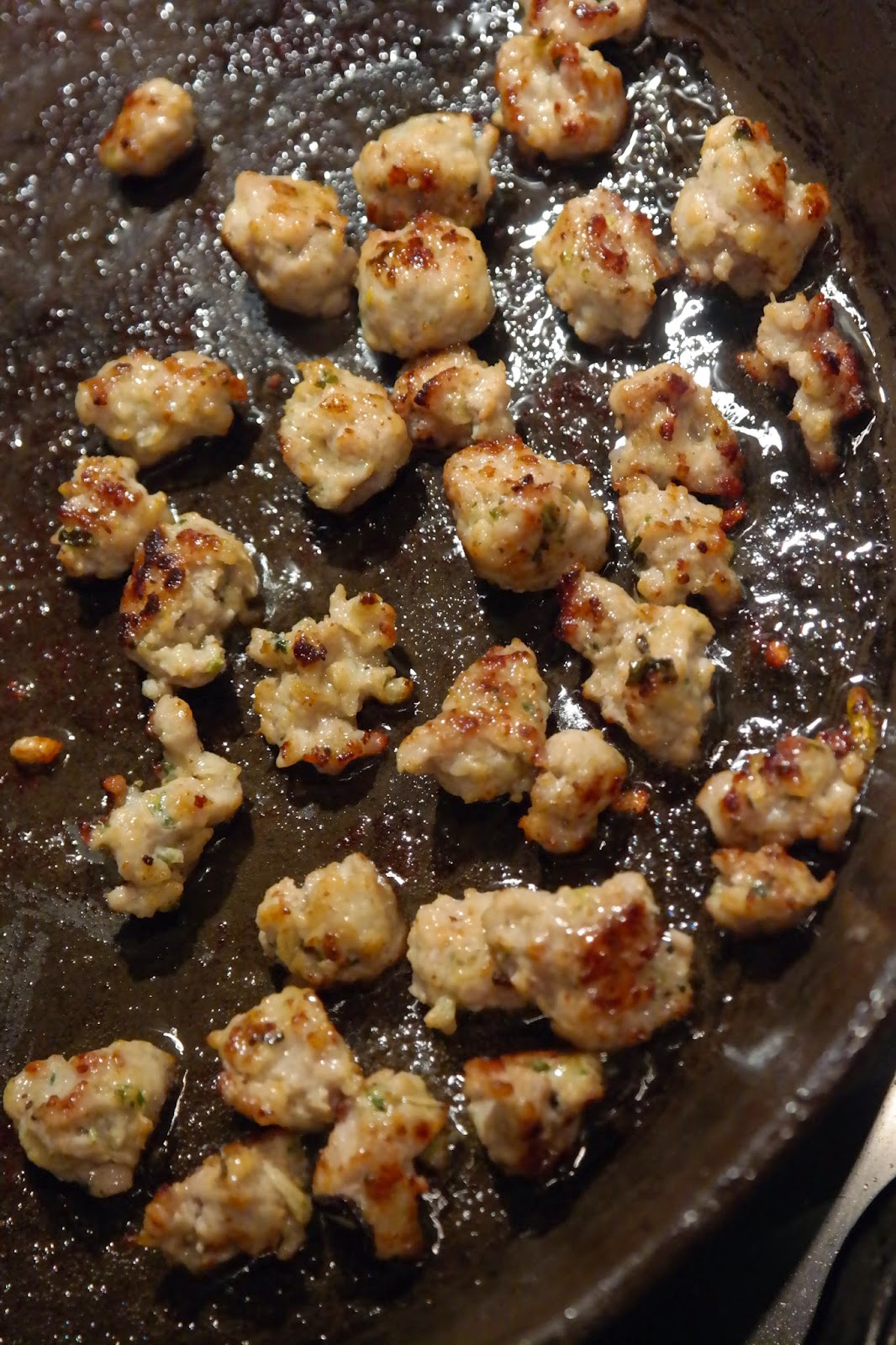 You want to end up with slightly browned, crispy and fully cooked little chunks. 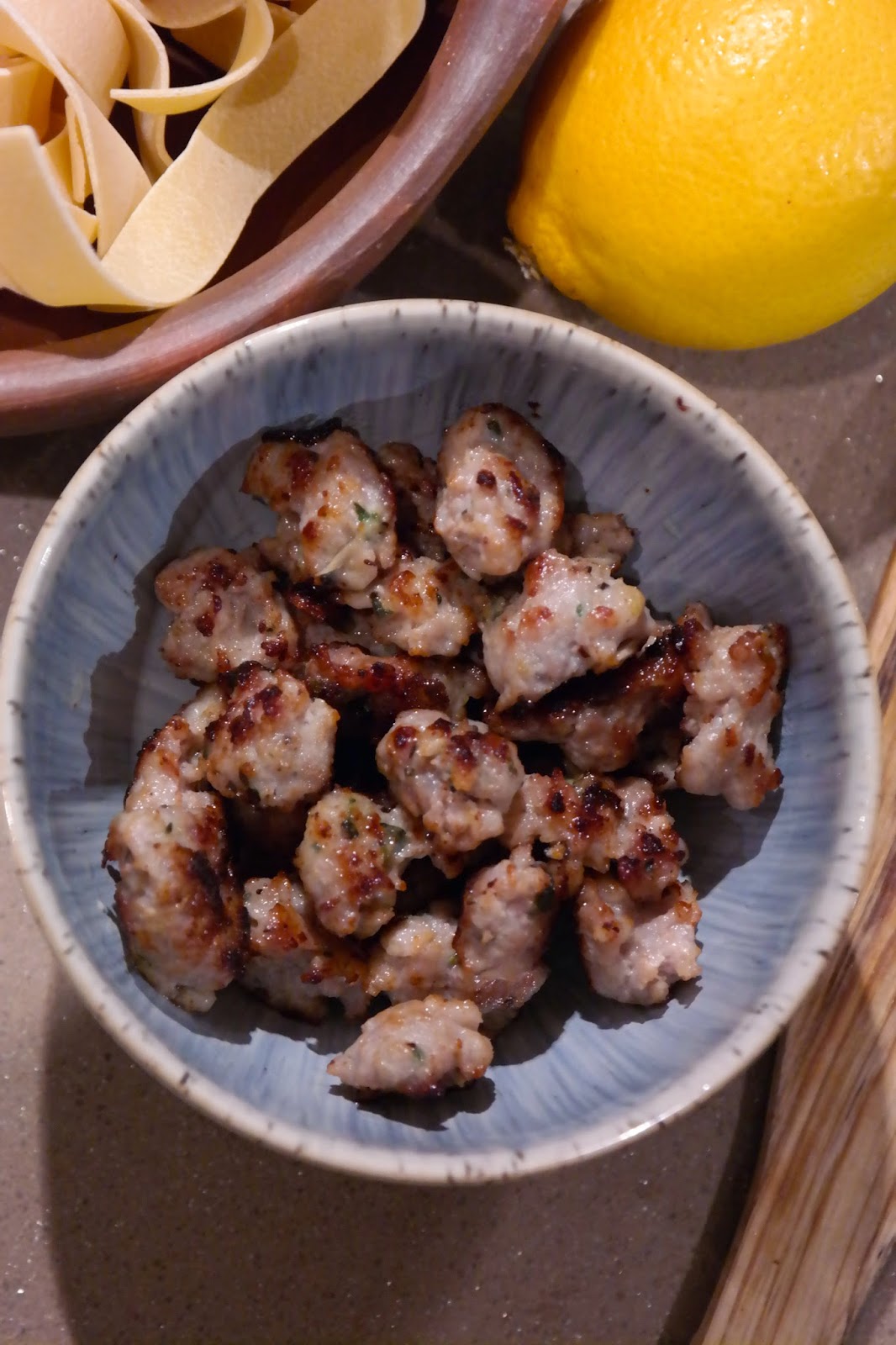 When done, remove from the pan using a slotted spoon and set aside, leaving as much of the rendered fat behind as possible.

You probably want to get the pasta in the pot now, so that’s ready when your mushrooms are.

Add half the butter to the pan and get your mushrooms cooking, so that they soften and begin to brown.  You may need to add a bit more oil, as mushrooms can really soak the fat up, but don’t overdo it. 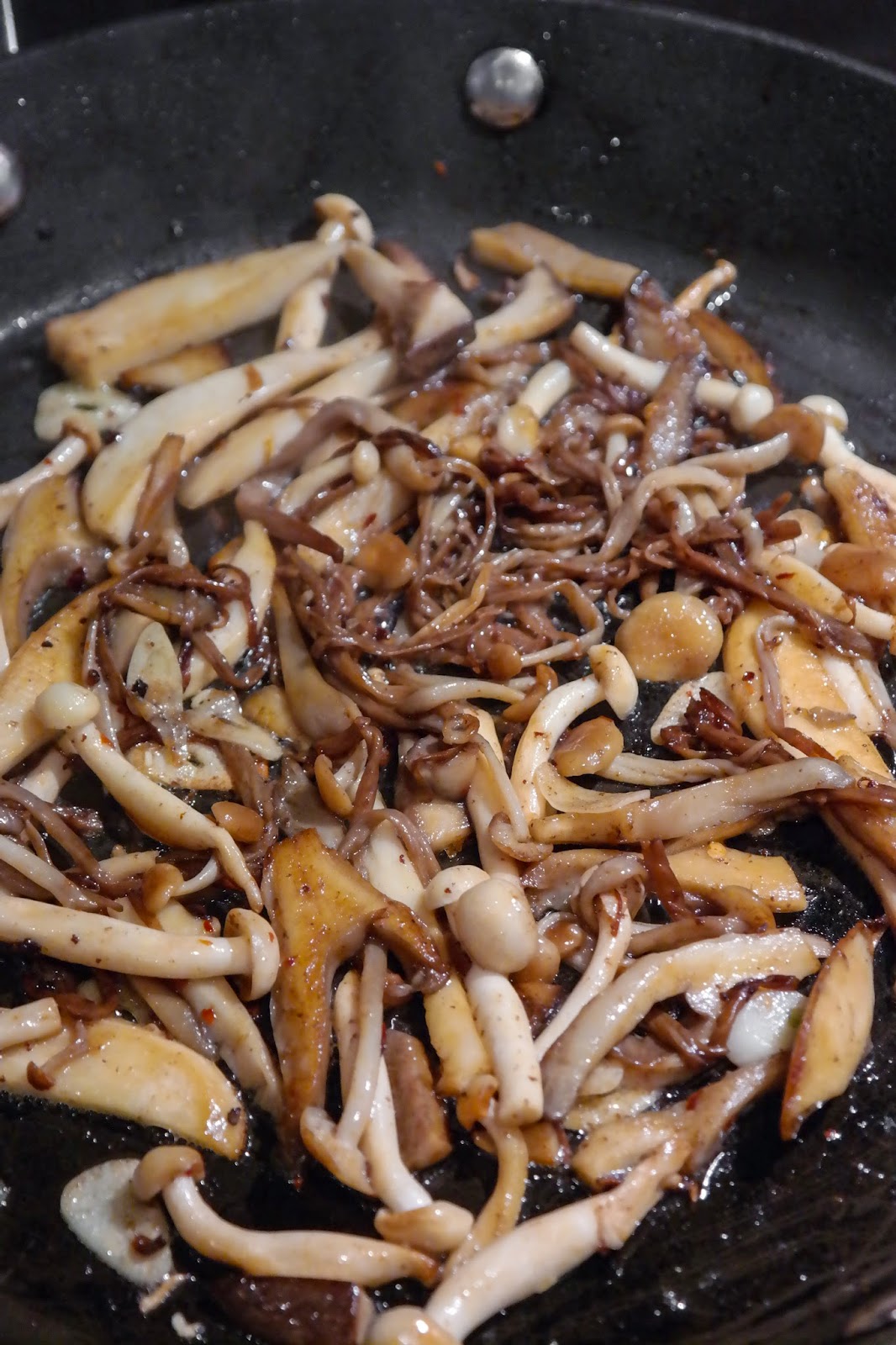 When the mushrooms are soft, peel and crack the garlic cloves and add to the pan.  Don’t do this sooner or else the garlic will burn (as it cooks quicker than the mushrooms) and leave a nasty, bitter taste.  Add the rest of the butter with the garlic and reintroduce the sausages. 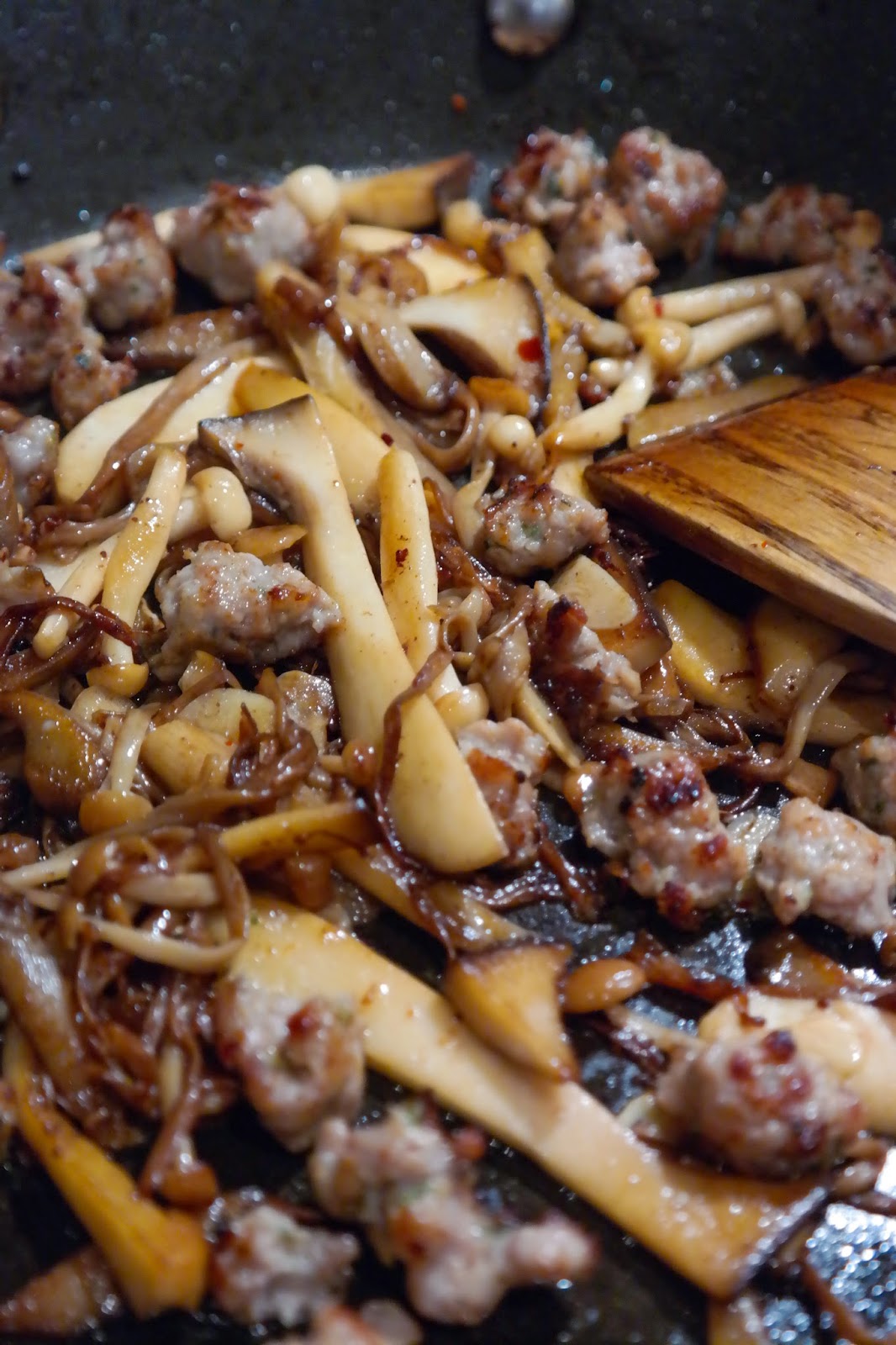 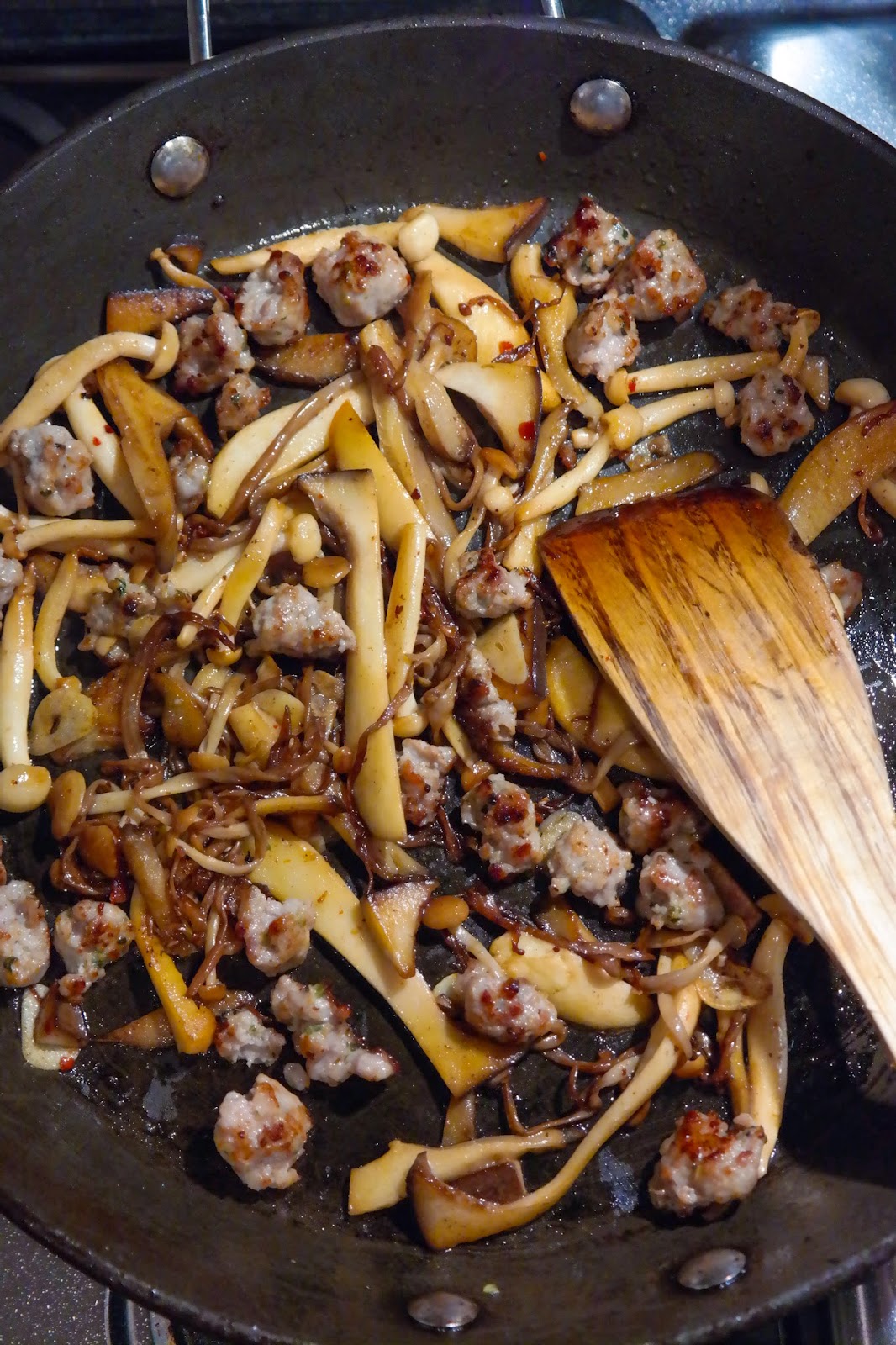 Cook for 5 minutes, but don’t let the mushrooms get too crispy.  Drain the pasta and throw it into the pan with the mushrooms and sausage mix.  Using tongs, mix the two together so that they are fully combined, then serve up, covered in grated parmesan. 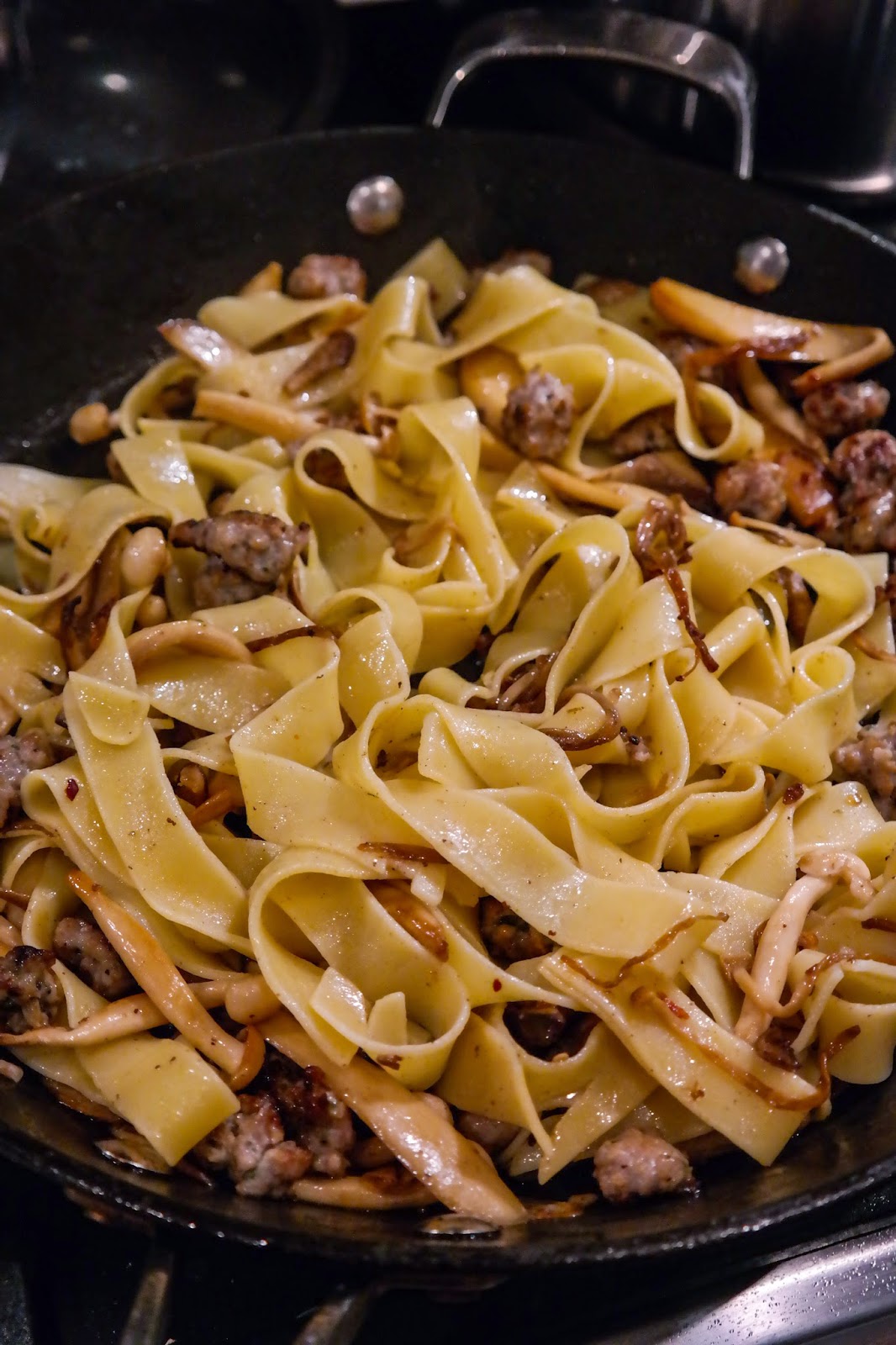 Preconceptions are funny things.  I have to admit having three of them, about Hispania, that were held before last week’s visit:


Anyway, turns out preconceptions are a crock of shite, because Hispania is really rather good.
There was a group of us searching for a meal.  One chap suggested tapas at Hispania, despite him being strictly averse to sharing food, but he’d had a colleague go there who enjoyed himself.  Everyone agreed. 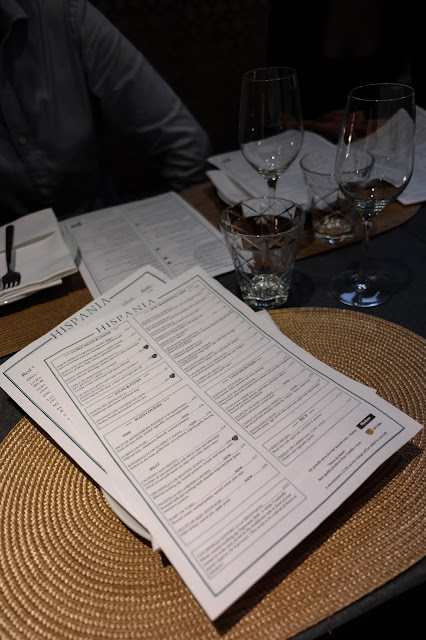 Have you ever tried ordering tapas amongst a large group of people?  Well don’t.  Even when you tell people to choose two dishes there is so much chit chat and wasted time and then you end up with a dozen bowls of patatas bravas and a platter of cured meats.  Best do what we did: Order the lot.  Literally, we ordered one of everything on their tapas list plus a platter of mixed meats and another of mixed cheeses.

Quick (photo-less, sorry) word about the wine.  Matthew, our resident wine expert and who has sold Hispania wine before, chose two bottles of red – one lighter and one heavier.  The heavier wine was Lucero del Alba, a Tempranillo (£30).  Dark, tannic and chewy, with t scent of burnt toast.  It was a food wine – and a rich, red meat kind of food wine at that.  Very good though – just my sort of thing.  The lighter wine was the Lágrimas de Garnacha (£26).  This was stunning – just amazing.  It was, again, quite punchy and spicy but with an immediate sweet note as well.  There was toffee as well, together with a hint of horseradish and also – and stay with me here – the flavour of burnt fat you get around a steak that’s been barbequed over charcoal.  Fantastic.

Now onto the food.

First out were the cold dishes.  Cured meat selection.  Top to bottom: Jamón Ibérico, lomo (loin), salchichón and chorizo.  Great stuff, top quality.  There’s not much more to say, I suppose, but I do love Spanish meats. 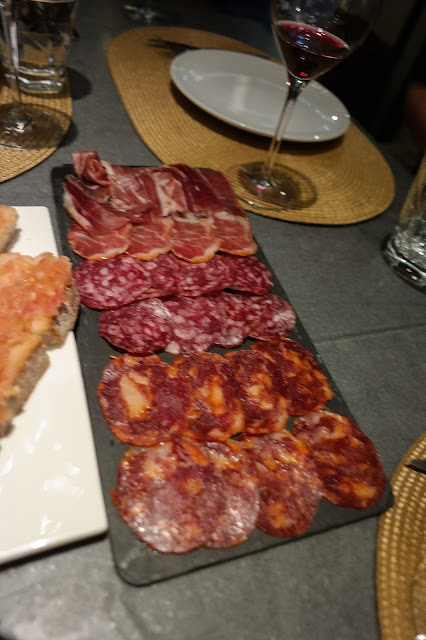 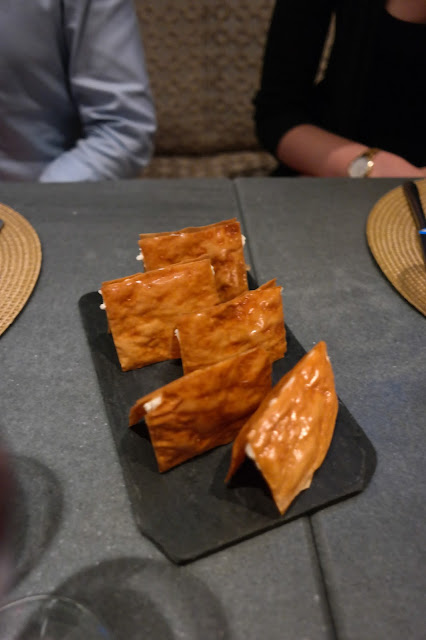 Initially, these were poo-pooed by the group, who did not like the sound of the dish.  OK, I get why some people might not be so keen – although a seasoned ‘salt-and-sweet’ grubster like myself had no truck with such objections.  These were great – in fact, it was the biggest opponent who ate the spare sample. 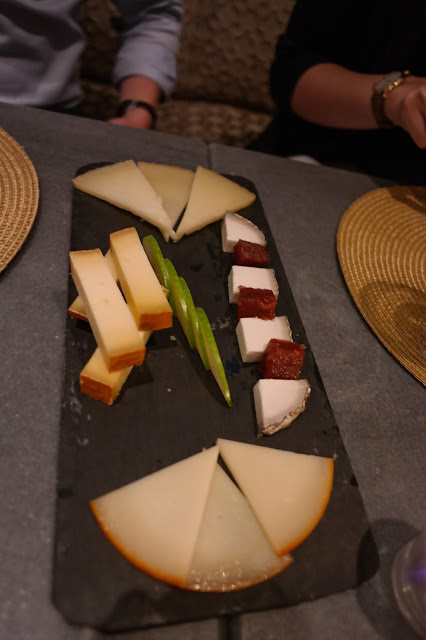 Again, all first rate and very delicious.  The standout favourite was the Cabra, a goat’s cheese – which is funny because I’m not that into goat that often.  This was delicious, however, and the membrillo worked with it like a treat.

Now for some fishy things.  Starting with monkfish. 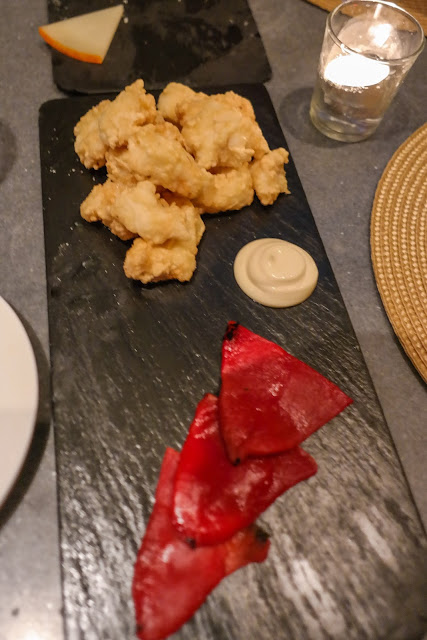 Monkfish is a brilliant fish, in my humble opinion, probably because it’s so meaty.  Just excellent (even though it costs a fortune) and here was no exception.  Lightly battered and fried, they fish was cooked properly.  I also absolutely bloody love piquillo peppers.  I will never forget the first time I tasted one any being physically knocked back by the intensity of their flavour.  How, I remember thinking and still wonder each time I eat one, does that much pepper-taste get in to such a small amount of vegetable.  So two of my favourite things.  What’s the catch?  Simple: they just don’t go together.  I’m not sure who paired these or why, but whilst each constituent element is wonderful, the finished article just falls a little flat. 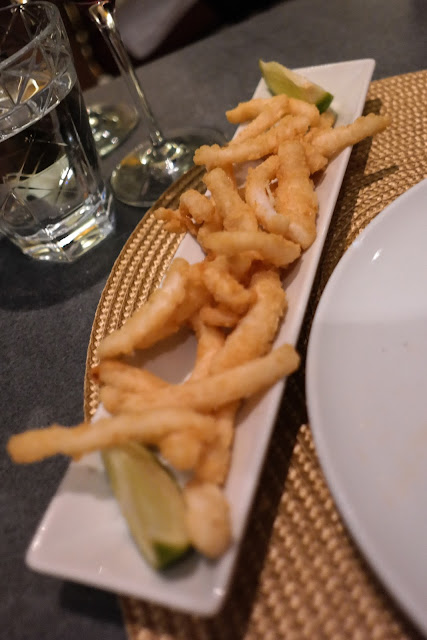 Bloody love calamari and these were bloody good examples.  With a squeeze of lime (not lemon, peculiarly) and a touch of lime zest this was a simple but delicious tapa.  It’s also worth noting that the squid was evidently fresh and cooked properly – soft and light, not hard and rubbery.  “Kentucky Fried Squid” said one diner (cruel but accurate – except, I might add, with significantly higher quality) whilst another diner passionately sworn off squid wolfed down a portion.  Happy days. 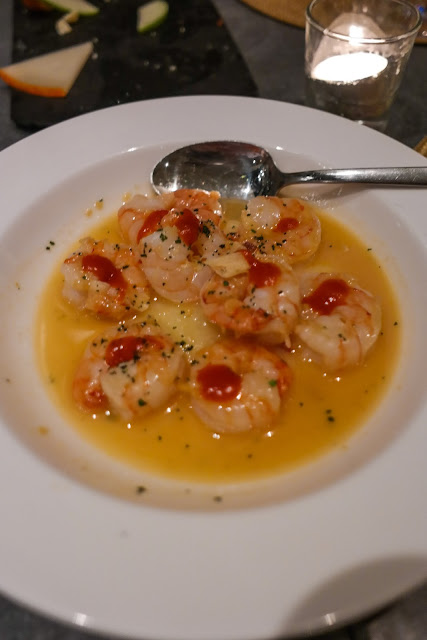 Or, prawns in a spicy, garlicky sauce.  Very classic.

Onwards and upwards: Now we hit the ‘hot food’ section (notwithstanding that the fish was hot – it was meant to be a sort of starter-fish-mains experience – I think?).

Croquets, which came in two forms: 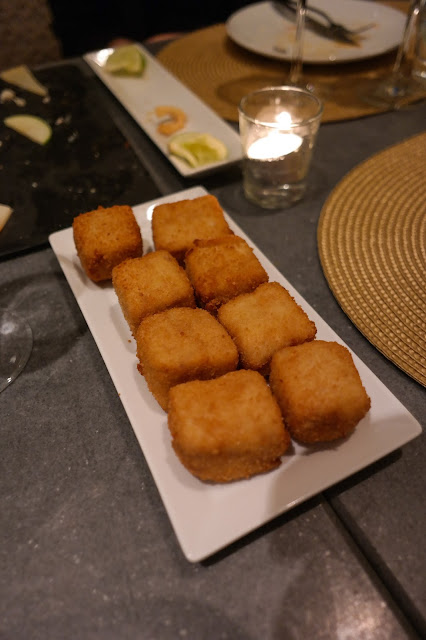 Very nice.  Large enough to get a proper portion but not so large that they are difficult to eat.  Very tasty too. 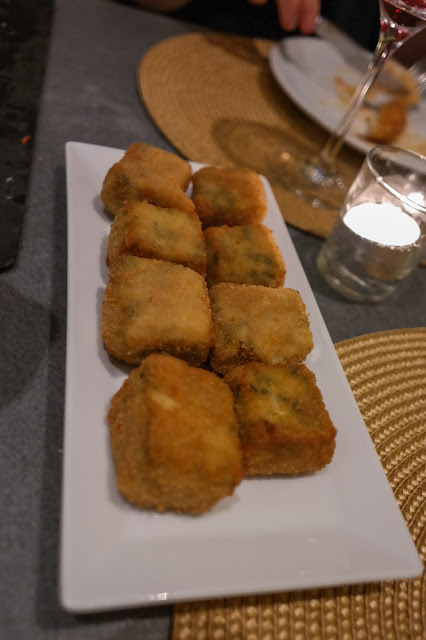 I am sure there is a back story to these, other than “created specially for the famous literary festival” that the menu proclaims.  I would like to know the back story because otherwise I cannot work out how (a) they are especially (that’s the correct word, btw) suited for the Hay Festival and (b) it was ever thought that substituting jamón with leeks would be an improvement.  Unless, of course, the chef at Hispania hates the Hay Festival / bookworms in general and wanted to serve an inferior croquet.  To be fair, there’s nothing wrong with this, it’s more a case that there’s nothing right with it either.  It’s just that I can’t help feeling that, on the choice of croquet with ham and croquet with leeks, the sane person would (and should) always choose the former.

And the ubiquitous Spanish tortilla. 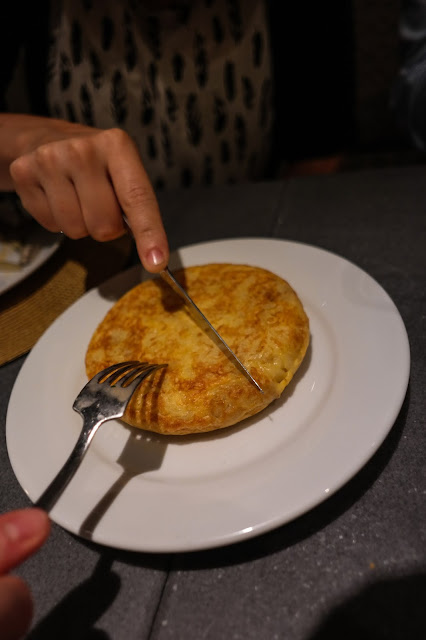 Now, I actually tried to talk the table out of ordering this because I’m no fan of omelettes and most forms of potato (yes it’s weird, no it doesn’t preclude me writing a food blog, and I’ve written about this in more detail elsewhere).  But I was overruled by the resident vegetarian and, given that we were having all sorts of other meat, I reckoned I should let her have her way.  It was actually pretty spectacular.  Rather than being, as is customary, a big, stodgy cakey of eggy potato, it was crisp on the outside whilst still being beautifully light and underdone inside.  This was actually a revelation.

Together with some padron peppers.  Not much to say about these.  They are nice.  They always are.  Five years ago you couldn’t find them in London for love or money, now you can’t go to a Spanish restaurant without having them virtually thrown at you. 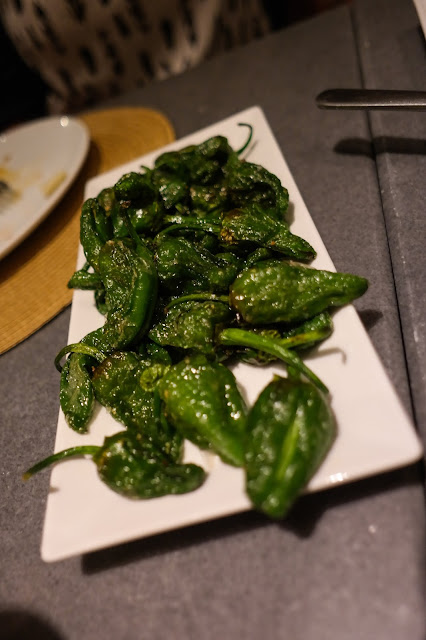 Morcilla duo.  If you’re not familiar with morcilla, it is what is known as a ‘blood sausage’, or black pudding, in plain English.  Although, it’s not really like a black pudding.  It tends to be softer, more moist, and has lumps of fat or sometimes rice where the English version has oats.  But you get the idea. 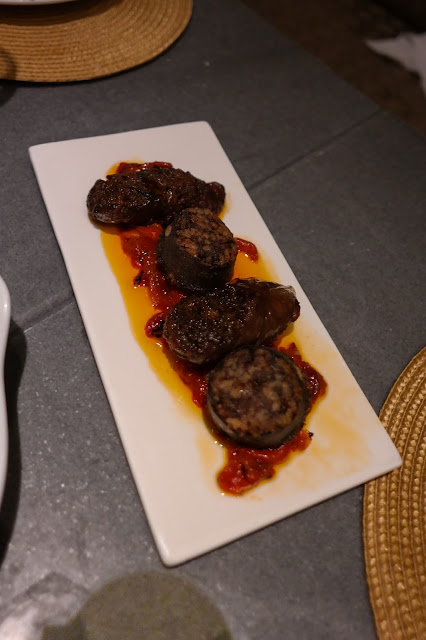 These two were onion and rice.  Both excellent, and very moreish – although the differences (other than in texture) were not immediately obvious.

A short break then followed before we were presented with what had to be the finale – the potato course (or so it seemed).

Huevos rotos de corral – or ham, egg and chips as it is known over here. 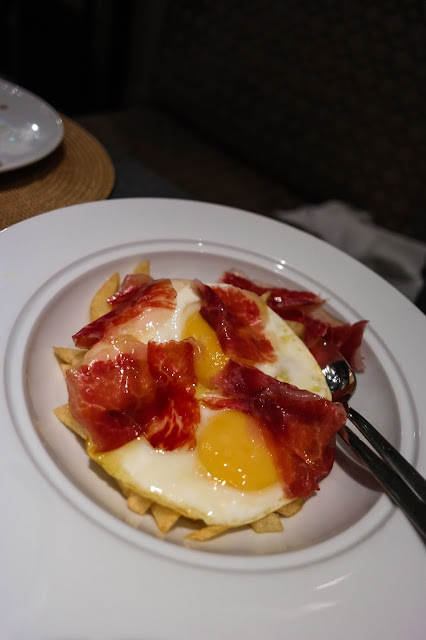 We are well and truly into hangover food territory now.  To tell the truth, when I saw this on the menu I knew I recognised it from somewhere – and assumed I liked it. Then it came back to me – my first visit to Tapas 24 in Barcelona (the very best tapas restaurant I have ever been to) and one of my earliest Grubster posts.  And when it came back to me I remembered: this is not a dish I enjoy.  Not then, not now.  Again, it’s more of a case of what’s right than what’s wrong.  This is a grease fest – Spain’s answer to Canada’s poutine or Britain’s chips and gravy.  You can try all you like, it’s not sophisticated, it’s not clever and it doesn’t belong in an upscale tapas joint like Hispania.  You can try all you like, but just no.

And then, of course, patas bravas. 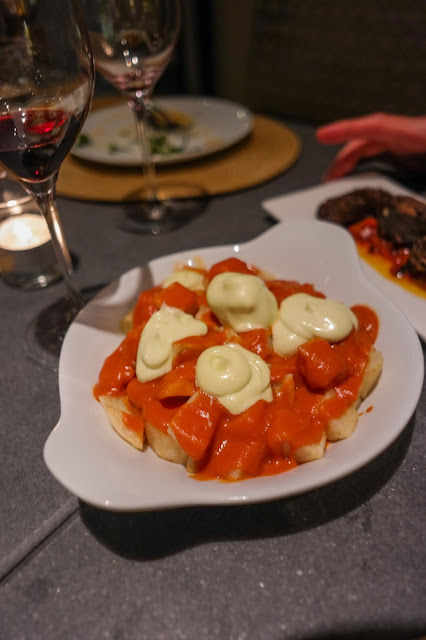 I mean…  Really, let’s cut to the chase.  If you like this sort of thing then you’ll like this version – very nicely done, with a fancy romesco sauce that’s full of flavour.  I personally find it hard to get excited, but the others seemed to enjoy it.

Greg, the man with the plan who suggested the place, had earlier confessed to me is worries regarding the cost.  I don’t wholly blame him – it looks from the outside (and within, with its epically tall ceilings, marble floors and wide, sparsely tabled spaces – it’s actually a very pleasant atmosphere) like it will be expensive.  When the bill came we were pleasantly surprised.  All that food (12 tapas plates and two platters) and drink (half a bottle of wine each in the end) came to about £36 a head.  Not bad – for the City.

Someone remarked that it somehow didn’t feel like authentic, Spanish tapas.  No kidding.  It wasn’t – it was high end tapas, done in a fancy, marble lined dining room.  There’s nothing wrong with that, it’s simply that you’re looking at a different beast.  And a very fine beast, in this case.
Posted by Grubster Boy at 11:14 59 comments: