Many years ago, during their relatively early(ish) courtship phase, my parents did a road trip across the United States.  They had a whale of a time.  A few years later, I did the same.  In my case it was with GrubsterGirl in tow, similarly in the early courtship phase, and now we're getting married.  Which is just acecakes.  Furthermore, some friends of ours recently got married.  Their first foreign trip together, and their honeymoon, were both US roadtrips.  I don’t know how I can say this any more clearly: there's obviously something about American roadtrips.  If you're wondering when your boyf will hurry up and propose / wondering whether your girlf will accept, can I recommend an American roadtrip?  Seal the deal.

Also, the scenery is a-maz-ing.

But I digress.  This post isn’t about our roadtrip or B&M's roadtrip / honeymoon.  It's about GrubsterMummy and GrubsterDaddy's 1970s road trip.  Sort of.  Specifically, it's about the one good meal they had in Vegas: steak salad.

This is a GrubsterMummy recipe - an attempt to re-live that aswsome salad - that I've done a (very little) bit of fiddling with.

This fed two but you could totally get a third out of it.  More even, if you're not hungry.  Less if you're American. 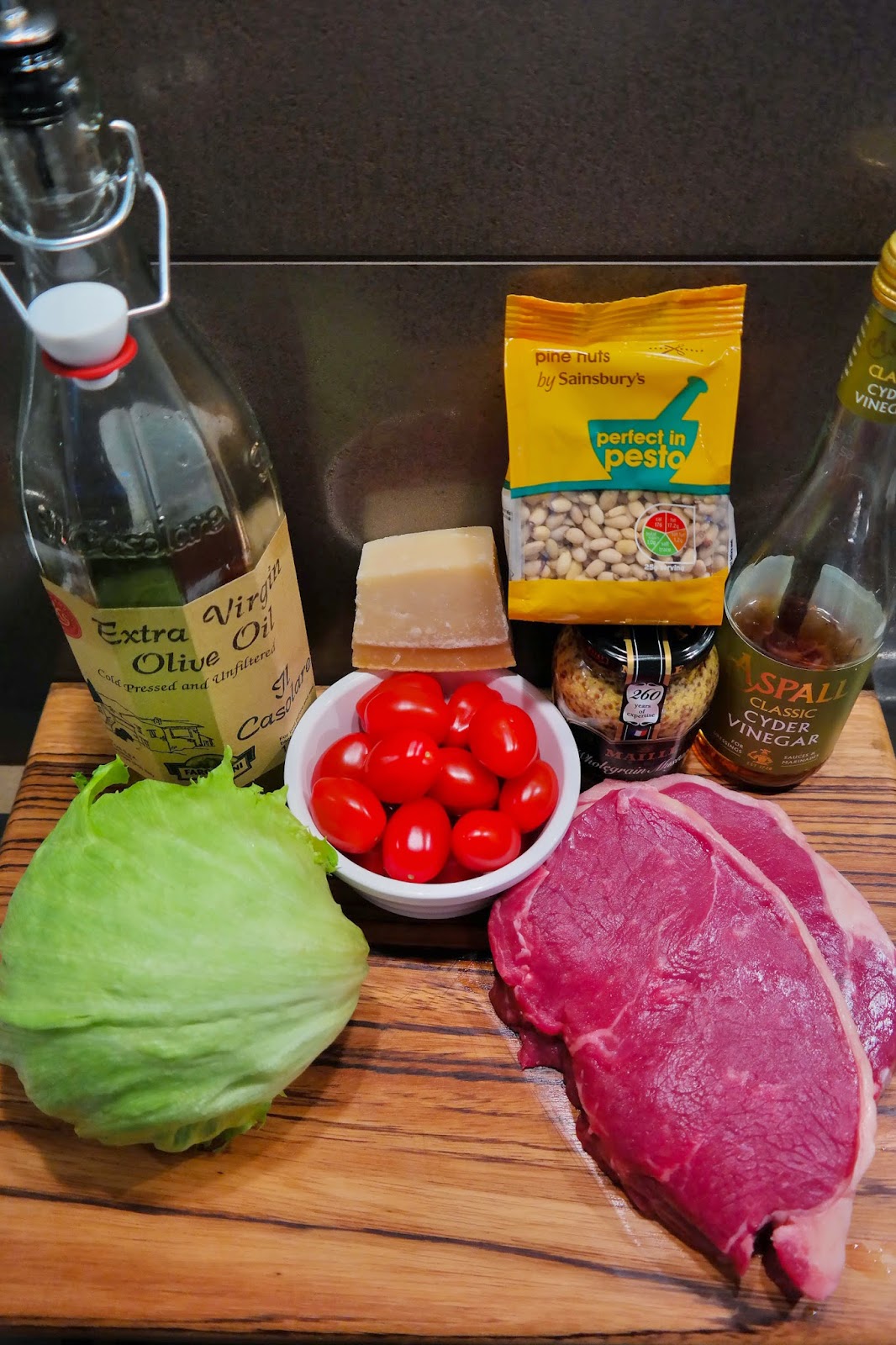 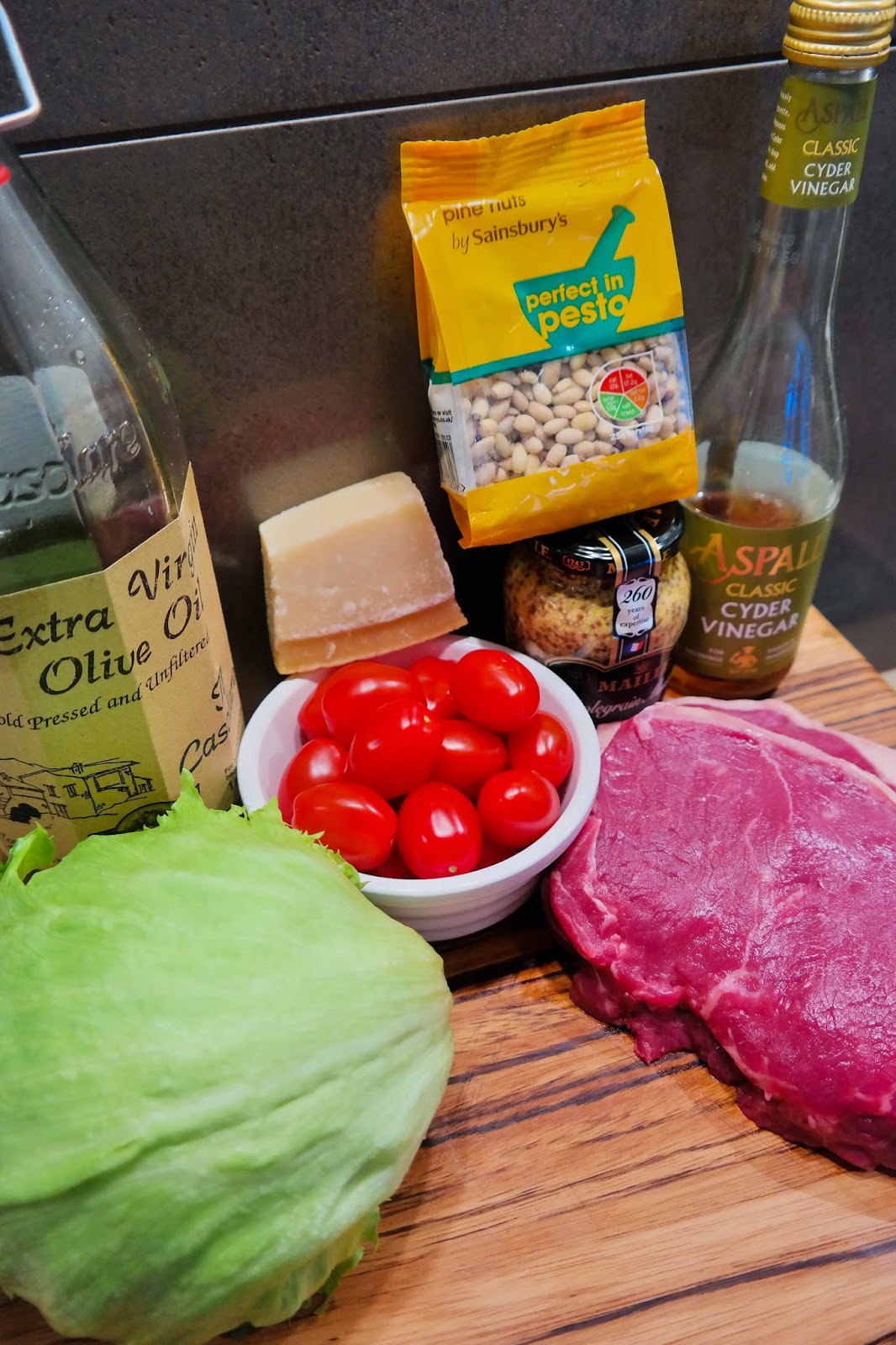 OK, first: yes, it has to be iceberg lettuce.  This is an American salad, OK?  It's, like, basically the law that it's made with iceberg.  Also, it's mega crunchy, which works well with the hot beef (more on that to follow).

The steak.  Totally up to you what you get.  I would have opted for ribeye because I think it's the tastiest.  But I know GG's less keen.  So I went for a lovely couple of sirloin.  You want something with some good fat in it, though, so I'm not sure if fillet would be a good idea.  Also, you're gonna mix it with salad and dressing, so... well, I know people who would object to doing that to an expensive piece of fillet. 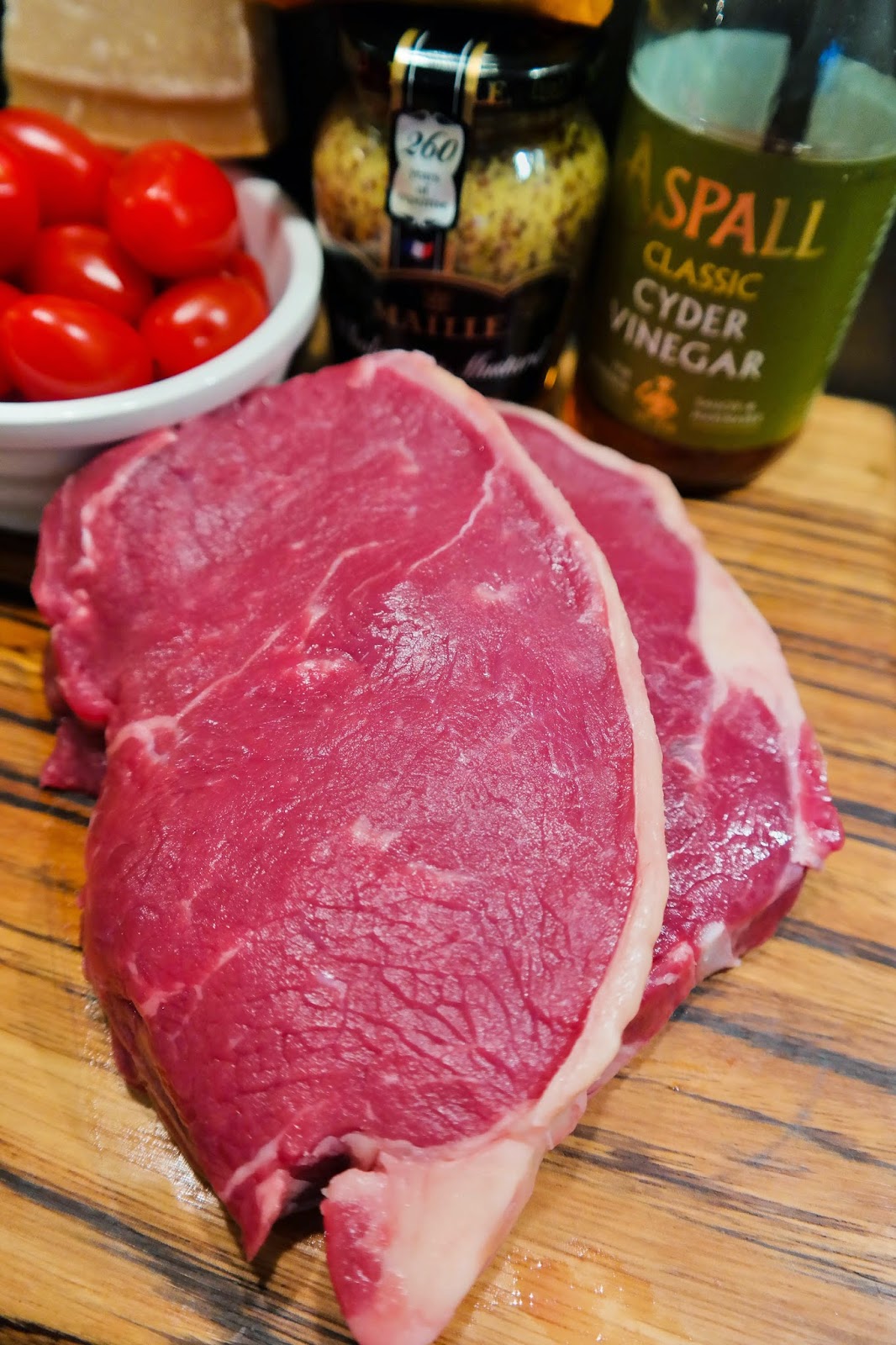 Right, first things first: toast them pine nuts – tossing them in the pan every so often.  They'll only need a minute or so – keep an eye on them as they burn.  It's so much better to do them in the oven, but I could not be faffed and it's also better to only have one pan to wash up. 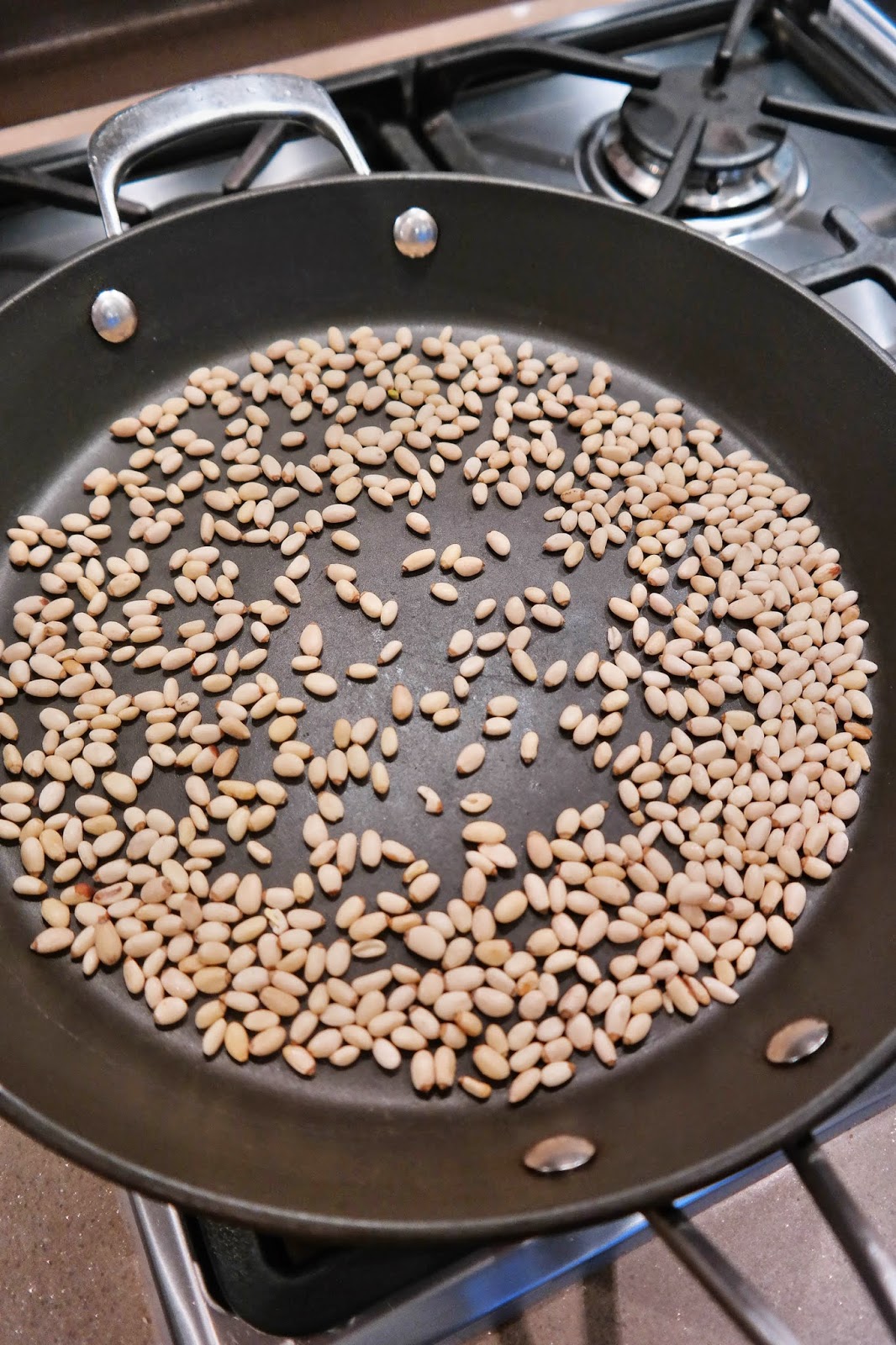 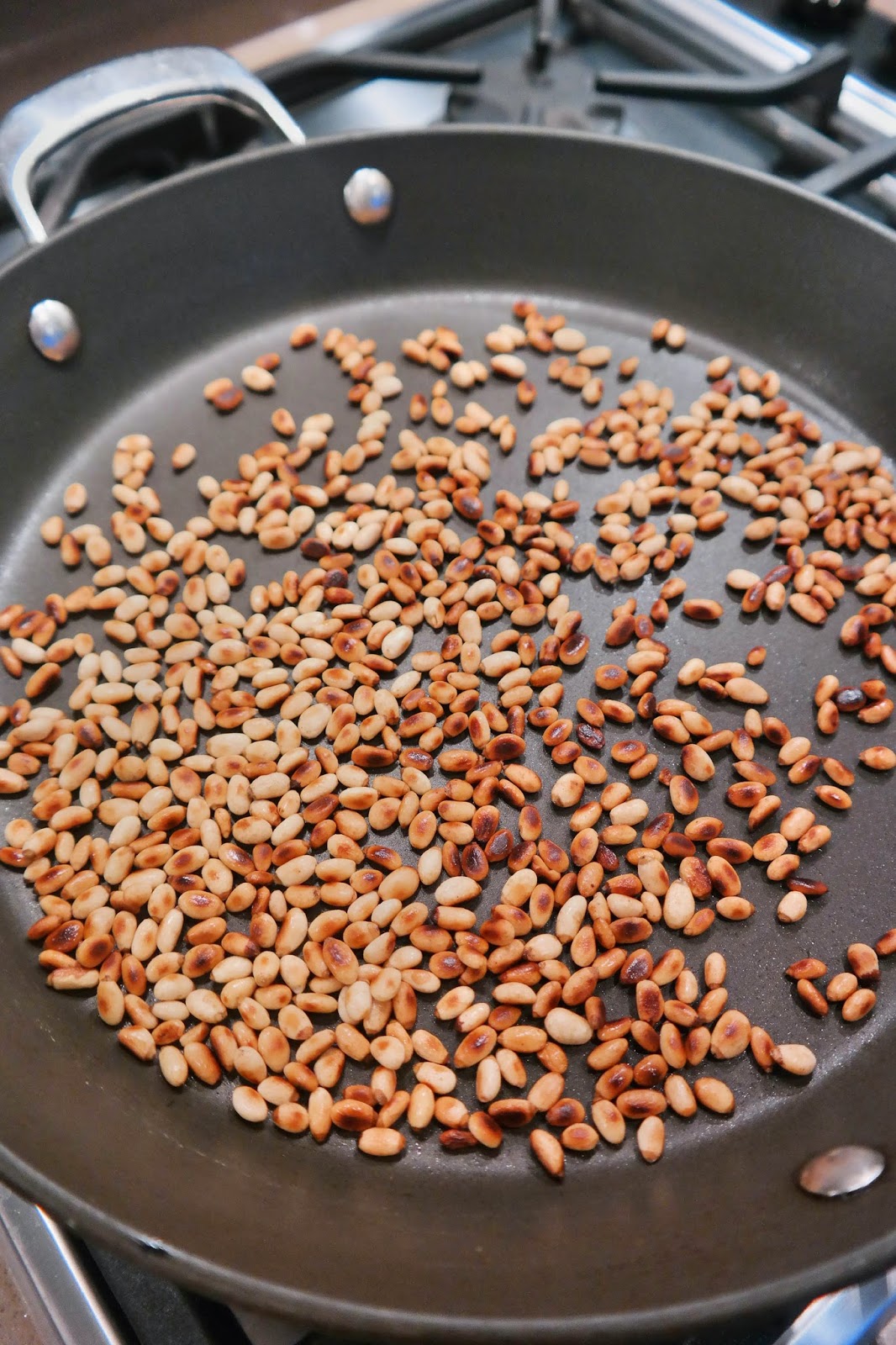 Next, turn the heat all the way up and let your pan get super hot.  I've got a very nice frying pan, made with thick iron, for this.  A griddle would be just as good / better – but in a pinch you could even use a Le Creuset or similar – I've seen it done.  You want to get the pan really, really hot for the next part.

Whilst the pan heats up, season one side of the steak (lots of salt, only a little pepper) and rub a little oil into the meat. Then, when the pan is nice and hot, carefully place the steak, seasoned side down, on the pan. 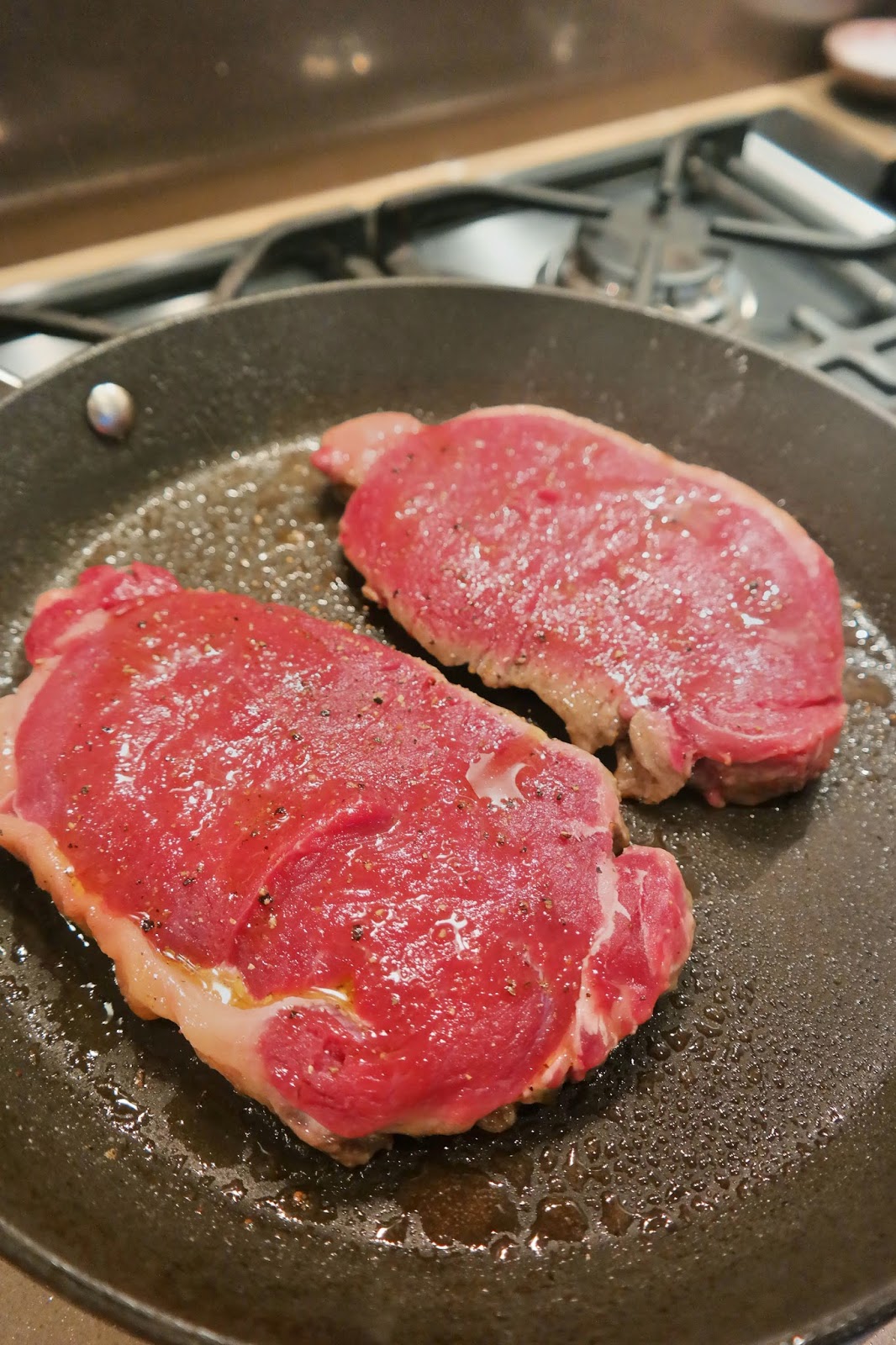 Now, DO NOT MOVE IT for the next minute and a half. Seriously. Don’t touch it. It wants to seal properly, so it shouldn’t be shifted. And please, please don’t go pressing it down like you see bad cooks around the BBQ doing. Sure, it makes a fun sizzling sound, but that's just the fat and juices squeezing out and evaporating away, leaving behind a drier steak.

It's only if you're resisted the temptation to push it around the pan that you'll get a really good crust going when you flip it, like this: 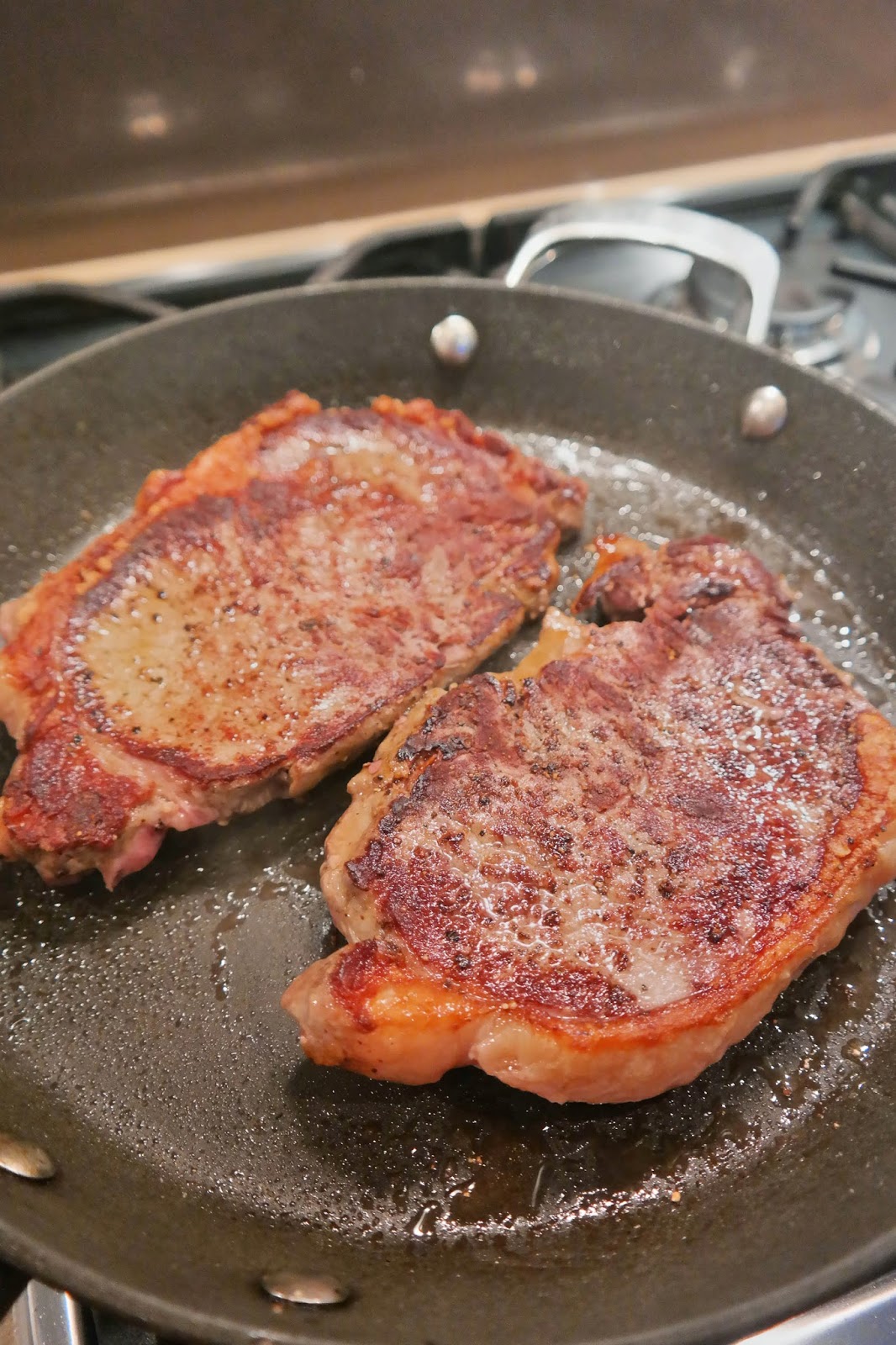 Once it's had a minute and a bit, season the raw top side and again massage a little oil in. Be careful, please. Flip it over at the 90 second mark. It'll need another minute or so.

When it's done, take it out and put it onto a plate (not a board, a plate – you'll see why).  Leave it there, for pity's sake – don’t go chopping it up yet, it needs to rest for at least five minutes. 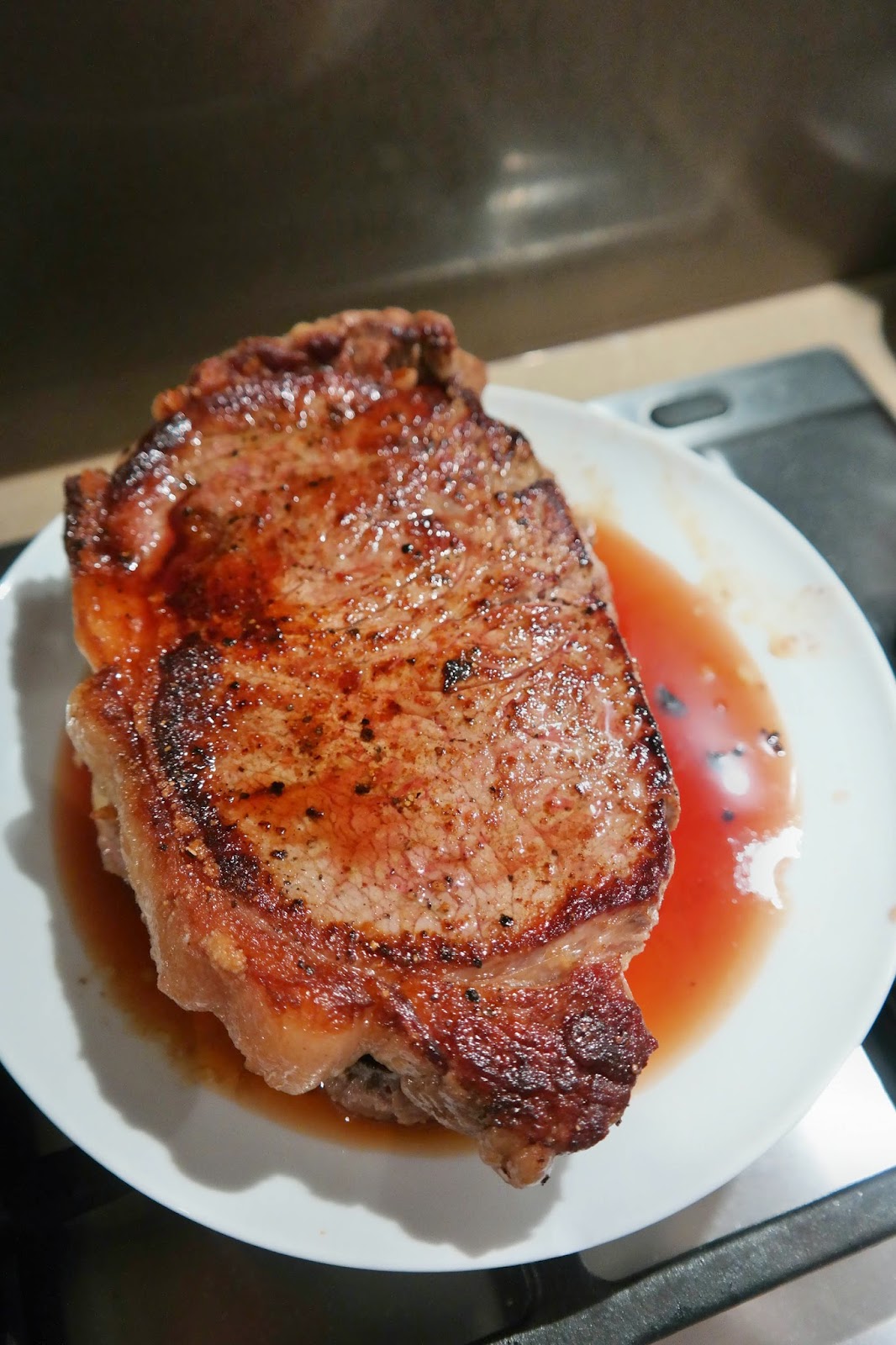 Right, whilst it rests you can assemble your salad.

Dice the iceberg lettuce and quarter the toms and throw them in a big salad bowl.  Grate the parmesan finely and add it to the mix, along with the pine nuts.  No need to toss yet.

Get out an old jam jar and chuck in the oil, vinegar, a teaspoon of honey and two of mustard.  Note: you're using less oil than I usually would for a vinaigrette such as this, but I have my reasons: You're going to use the meat juices as surrogate oil.  By now, you see, you should have a like gravy lake forming around your cuts.  Pour that into the jam jar (you see why I didn’t want you resting this on a board now?).  Season with salt and pepper, close the lid and shake like crazy.  Taste – add more honey or mustard to your own taste.

Next up: slice the steaks into strips.  Any additional meat juices appearing can go in the dressing. (BTW: GG likes hers a little more done than me – so I left it on longer than I'd desire, but it's totally up to you.) 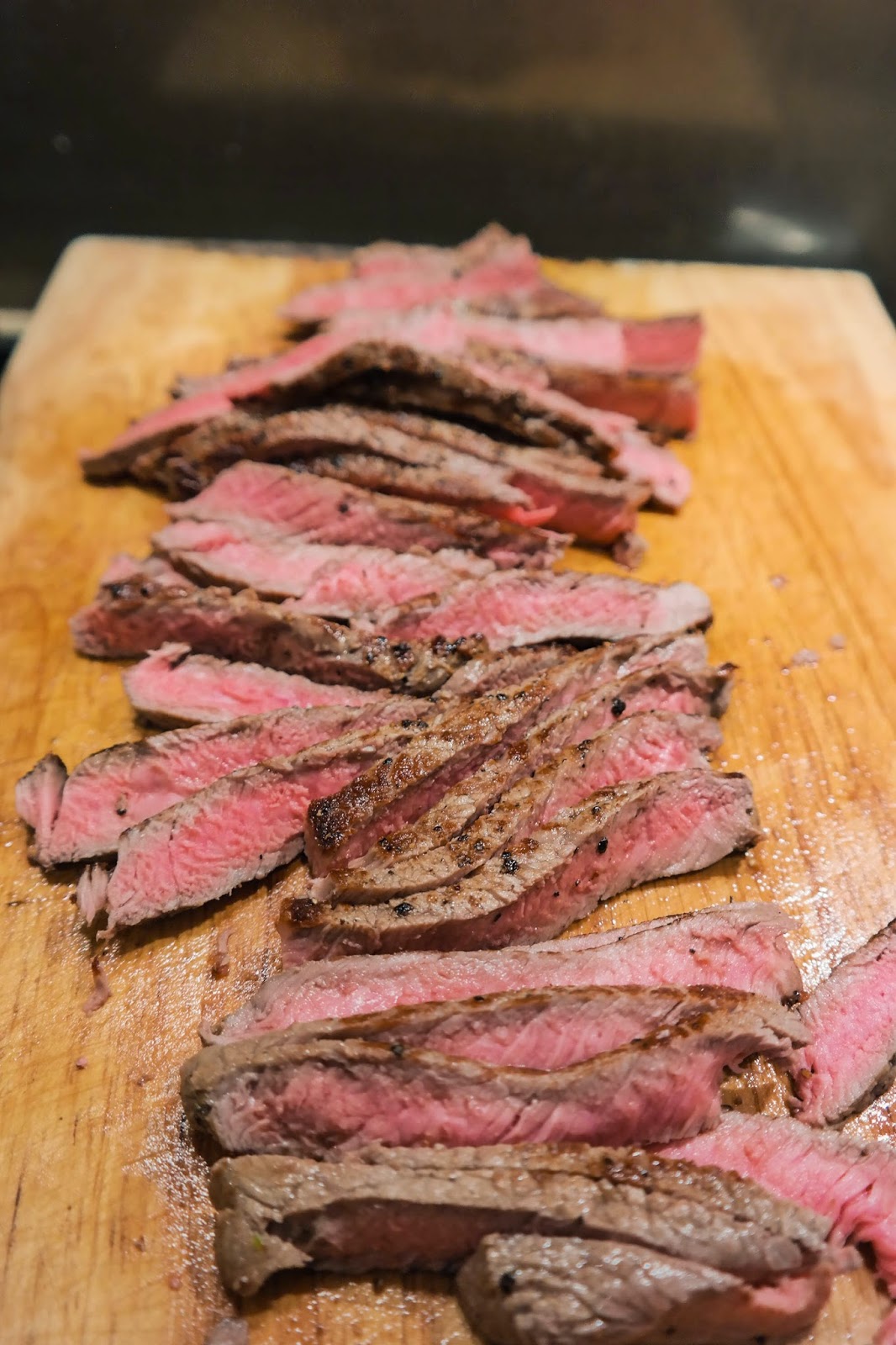 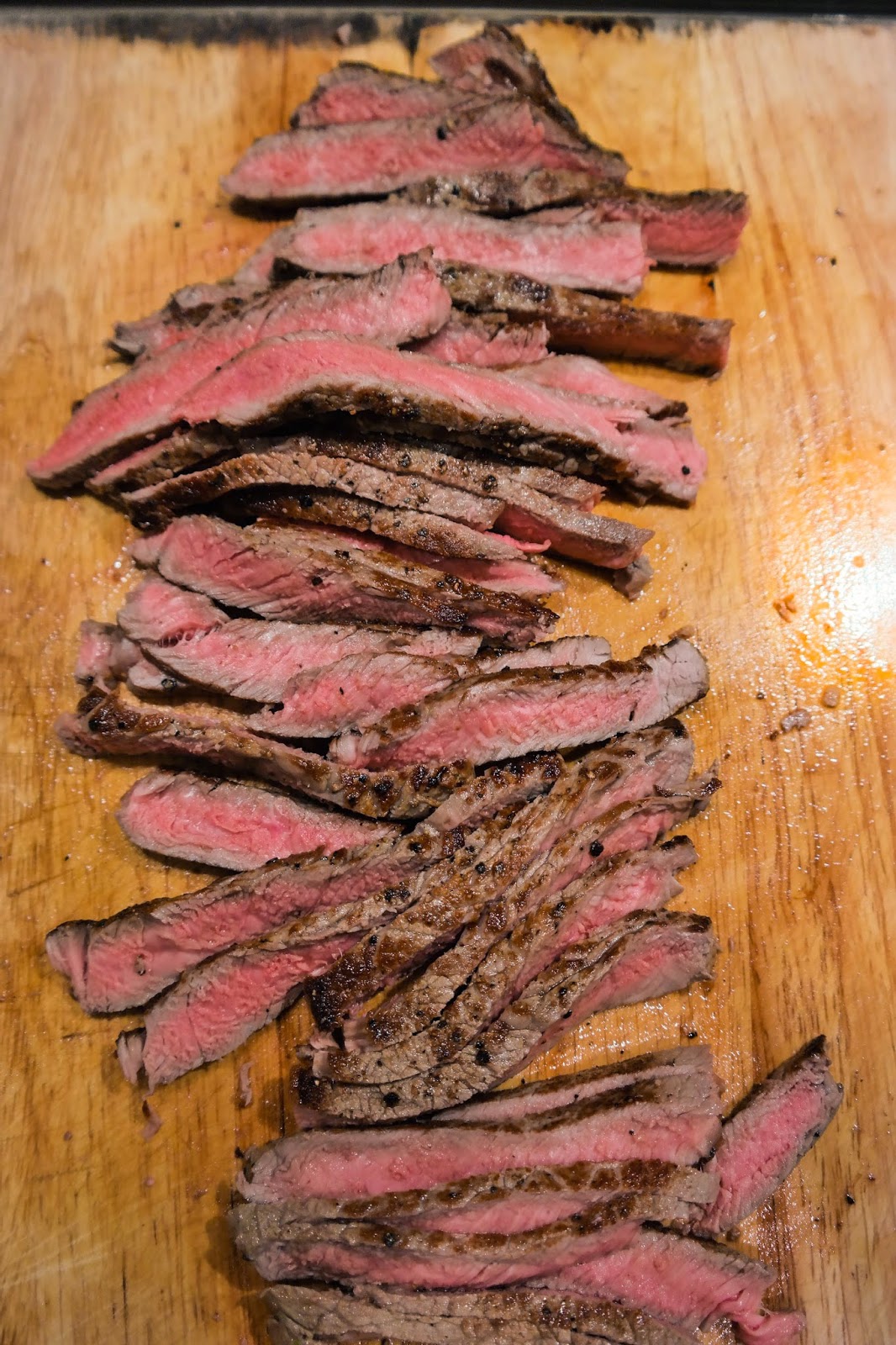 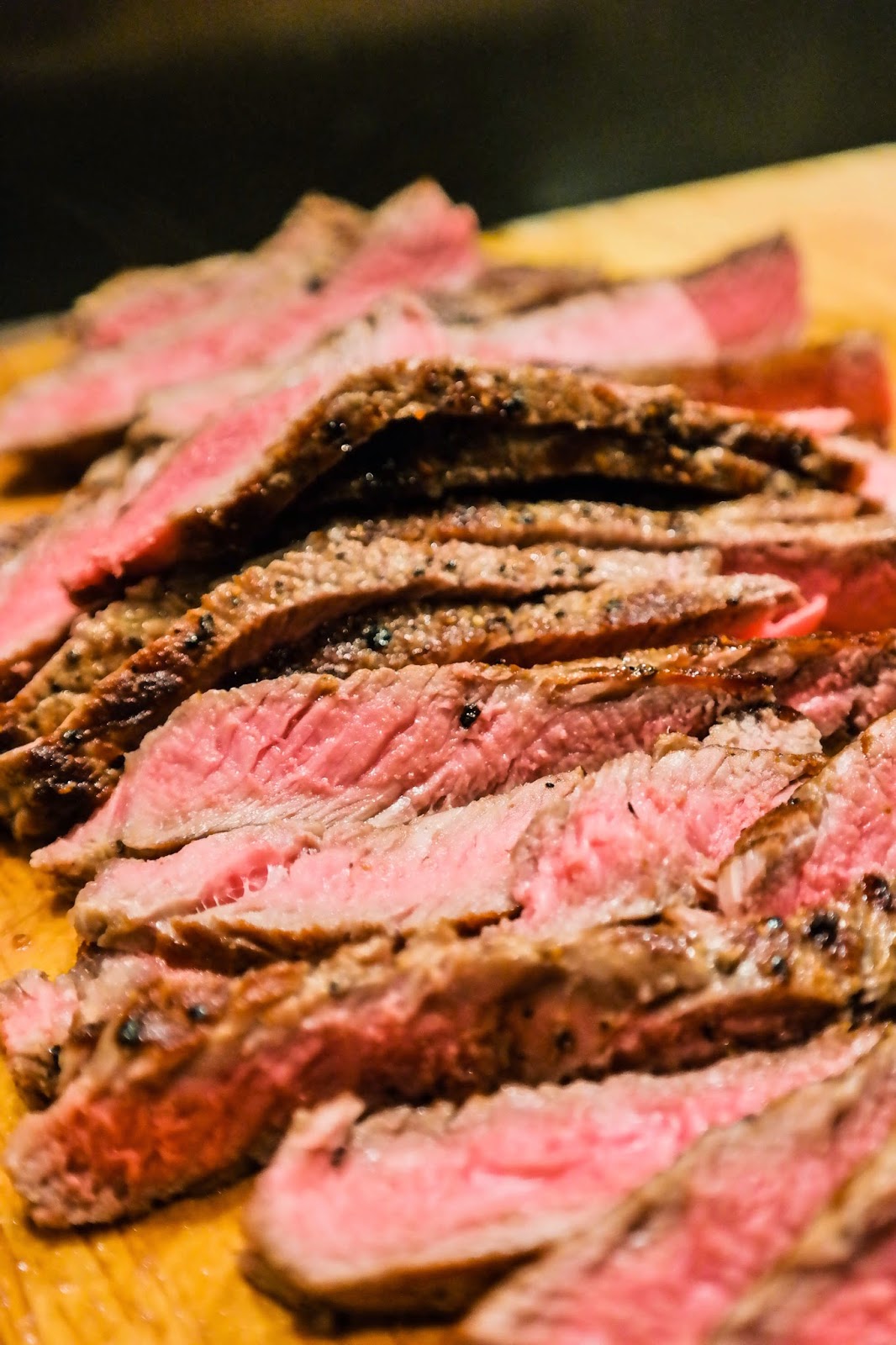 Dump the steak into the salad, dress and toss the whole thing. 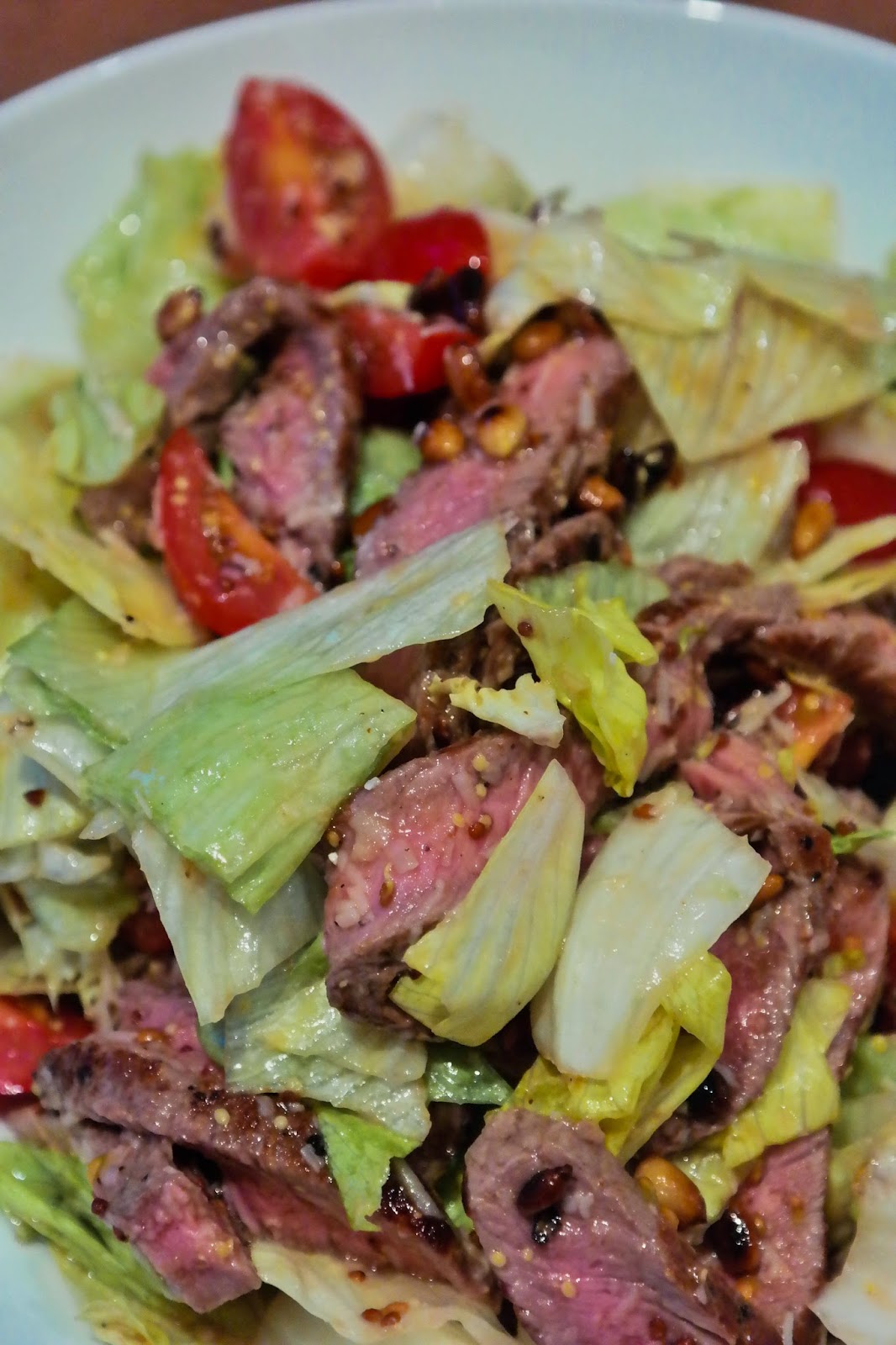 Serve with cold beer on a hot day.