This is another one of those recipes that I am going to keep up my sleeve for a dinner party because, again (much like whisky cured salmon or making your own home made oatcakes) it makes you sound like a phenomenal, nay, award winning, chef without actually being even remotely difficult.  Please don't allow the length of the post to confuse you - this is a lot easier than it looks.

The one thing I do recommend, however, is that you do it with an ice cream maker.  I have one that goes in the freezer for 48 hours before hand, which is a bit of a faff but frankly does the job just fine – they start from about £30 these days, whereas the worktop machines (that have an in-built freezer unit) start from about £300.  You can do it through the freeze, whisk, repeat method (freeze for a few hours, whisk the partially frozen crystals, freeze again, etc...) but I advise against it.  Before I had my machine I had a (thoroughly underserved) reputation for being crap at ice cream based on an incident during a weekend in the country when I made sorbet, the boys turned up on the Friday night as I was meant to be doing the waiting-and-whisking bit, we got lashed and I forgot to whisk, and we ended up with a block of frozen syrup for pudding the next night.  So save yourself the bother.

You will also need a stick blender or (if you're lucky and have one) and actual smoothie blender. 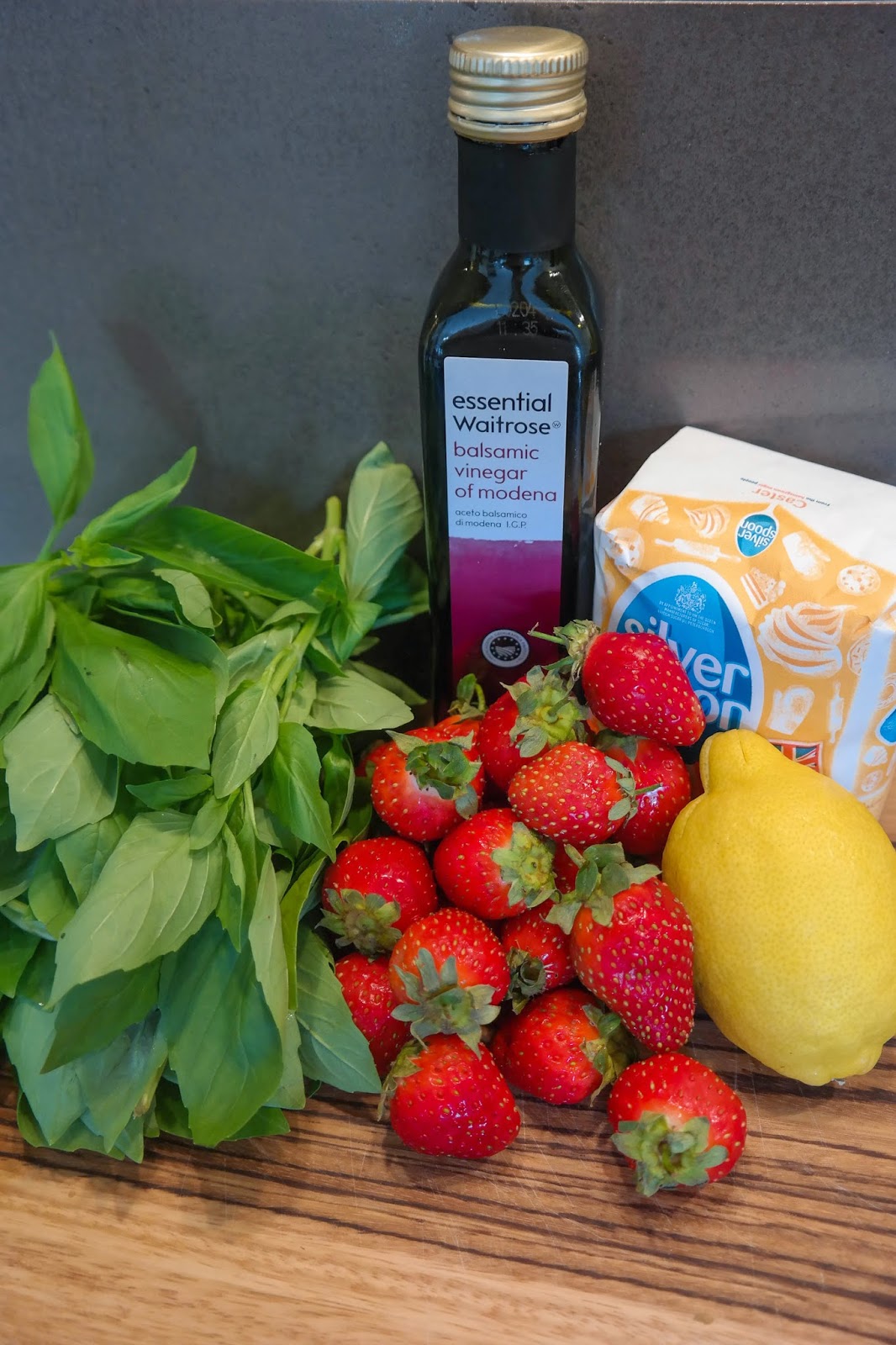 Before you begin, ask yourself this: Are my guests coming tonight?  If the answer is yes, then find another recipe.  This recipe takes two days – one to make, and the other to freeze.  At a pinch you could do steps 1-4 the night before, and then get up super early on the day of the party and do the rest as quickly as possible.  It feeds 4 to 6.

1. Pick your basil over, removing any grim-looking bits, and breaking the stalks up into sections no longer than an inch – shorter even if you can be faffed.  Omit this step at your peril – you will spend days (literally) trying to unravel long fibrous stalks from the blades of your blender. 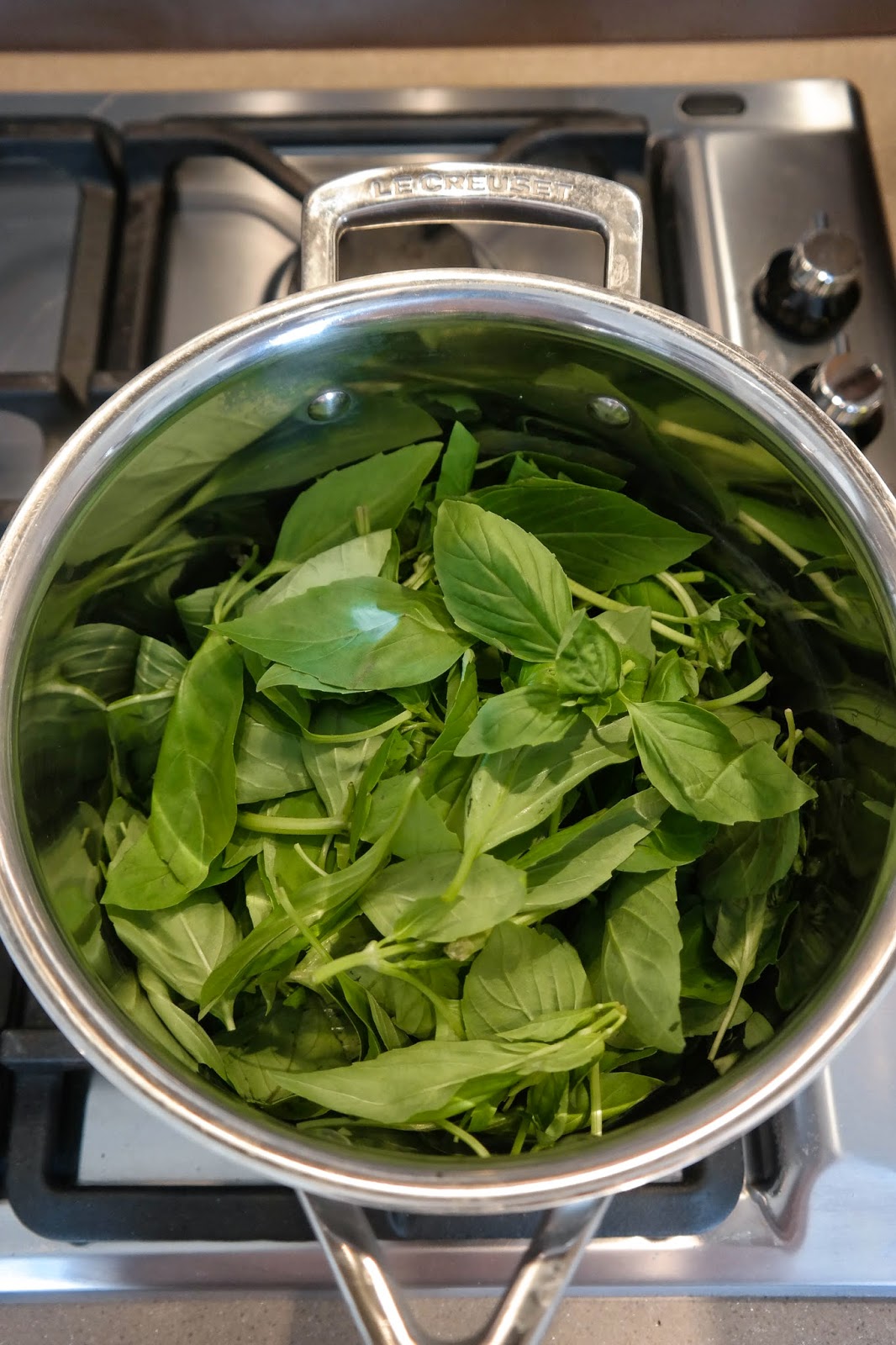 2. Place the basil and the sugar, along with 300ml of water, in a large(ish) saucepan over a high heat.  Bring it to the boil until the sugar has completely dissolved and the basil wilted a little, so that it looks a bit like steamed spinach.  Take it off the heat and allow it to cool. 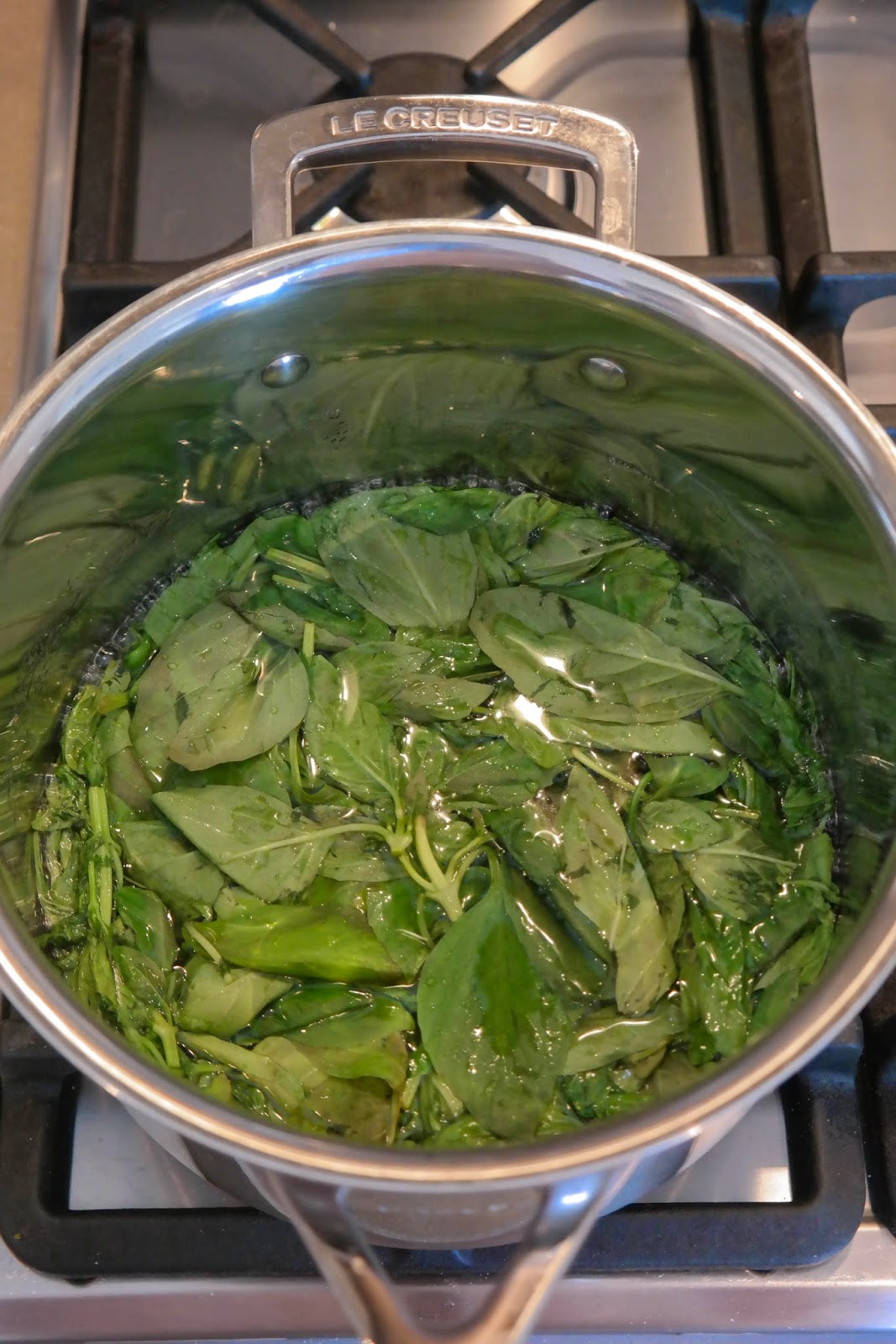 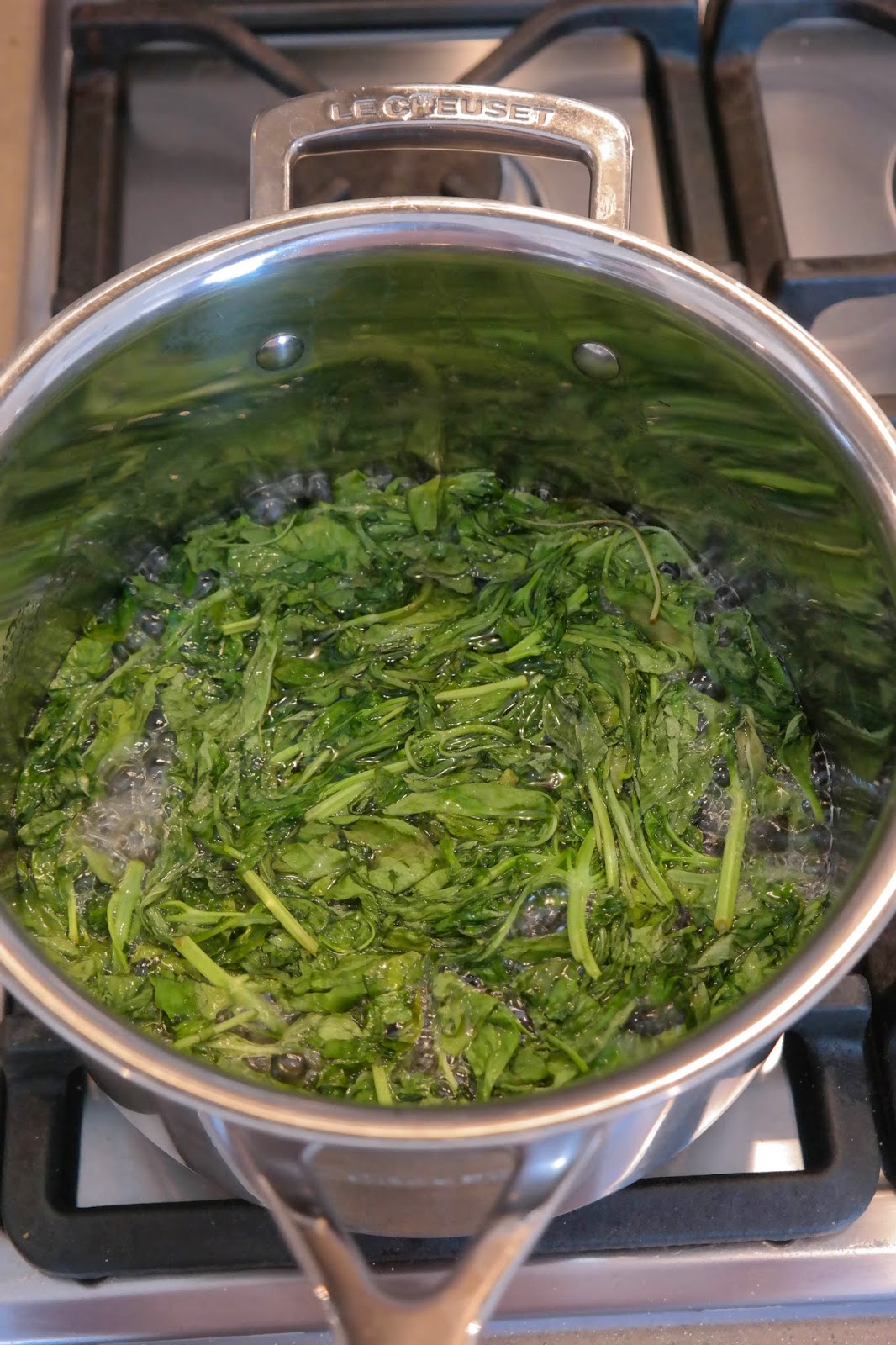 3. Whilst the sorbet syrup cools you can get started on the balsamic glaze.  Mix the sugar, just two of the tablespoons of vinegar and two tablespoons of water together in the smallest pan you have.  This should go over a medium heat, stirring regularly.  Dissolve the sugar and bring it to the boil, cooking off most of the liquid.  Turn the heat off, cover and leave it to cool right down to room temperature. 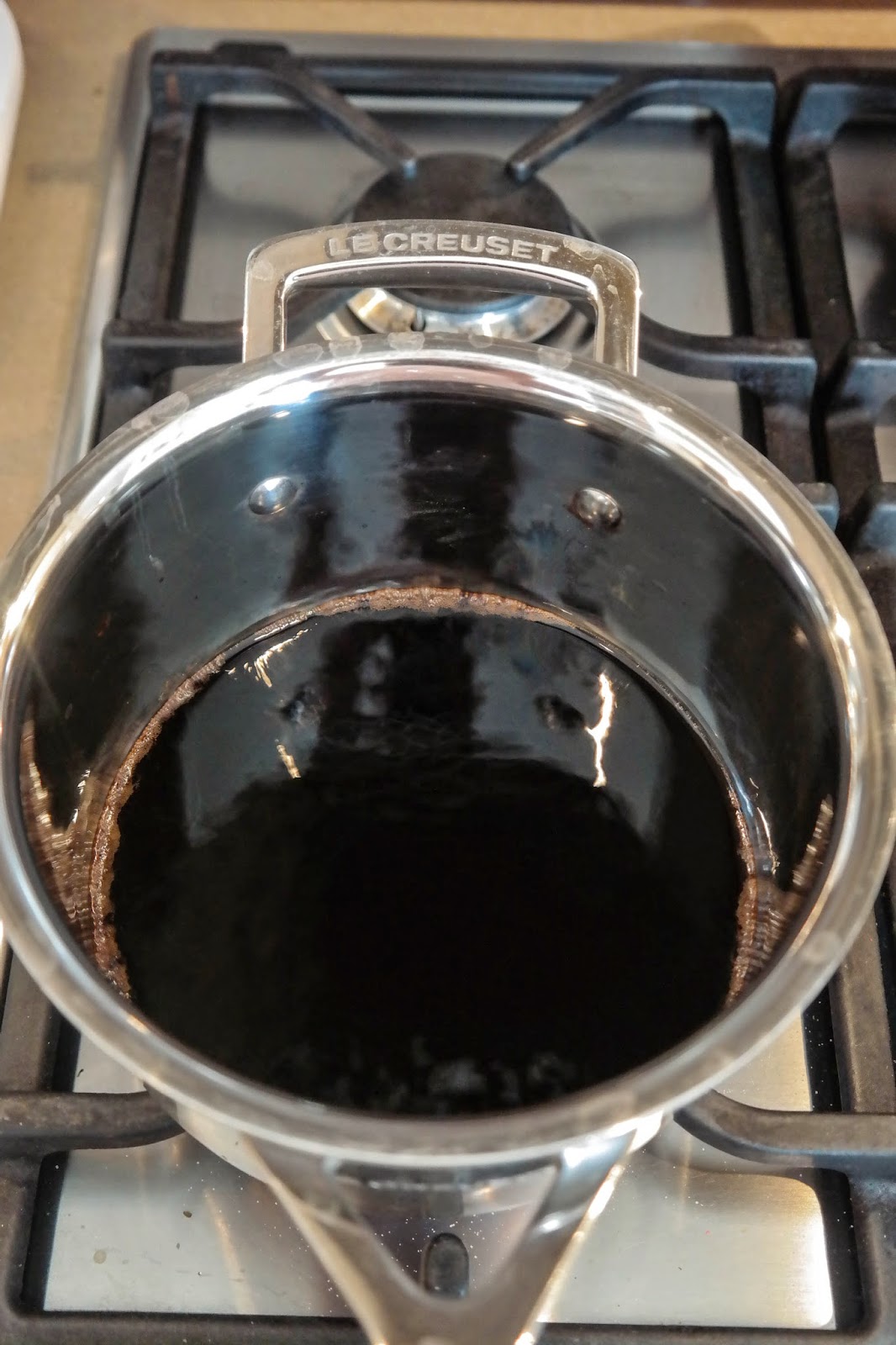 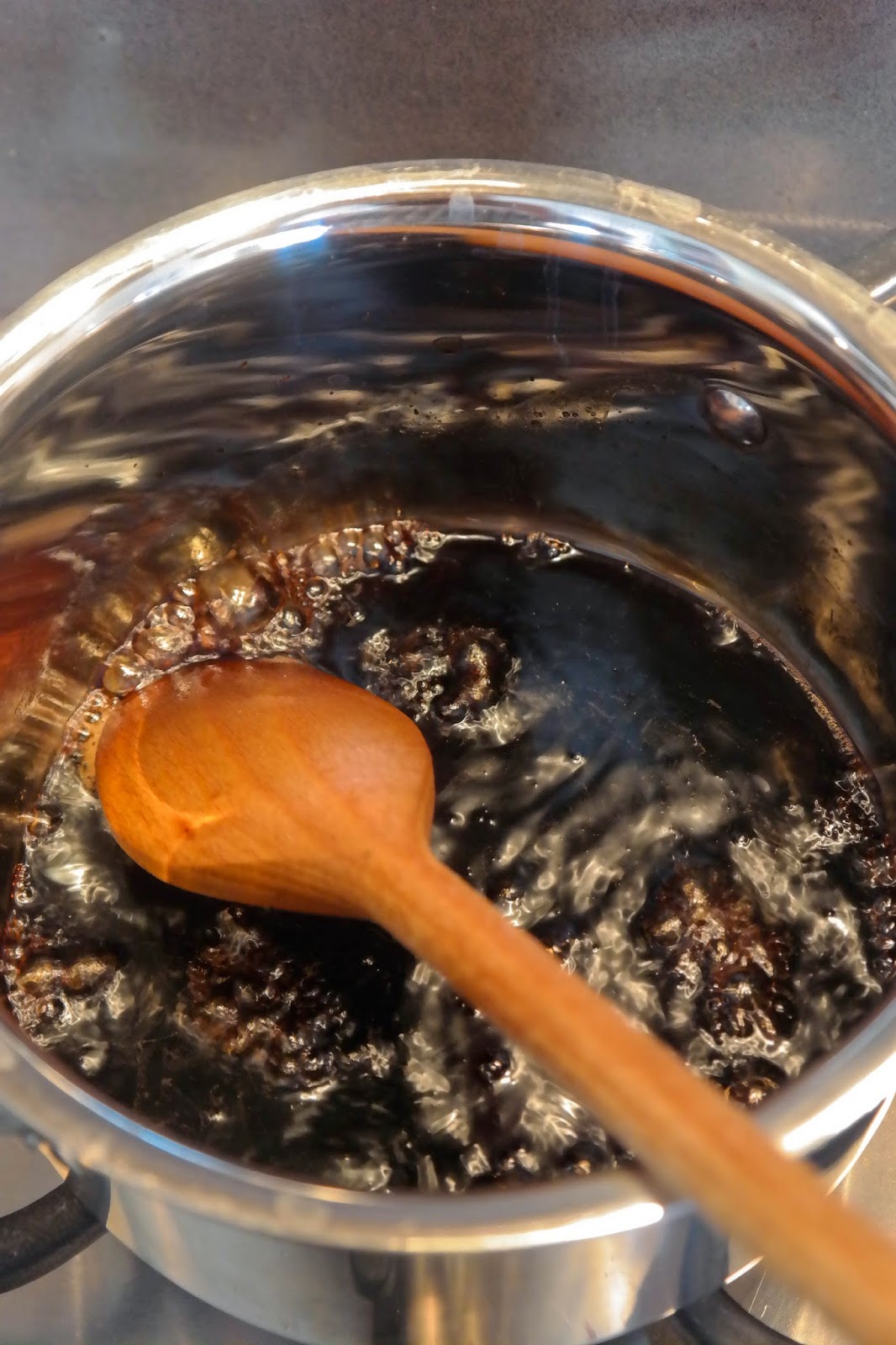 4. By now your sorbet syrup will be cool enough to play with (but careful, it will still be hot).  Basically, you need to blend it smooth.  This really requires a blender, but I don’t have one of those, so I improvised with a kilner jar and a stick blender.  Do NOT put it in a food processor.  Turns out those puppies aren't waterproof.  Basically it came out like an erupting volcano.

Once you've liquidised it will look like one of those hateful smoothies that hippies / healthfreaks drink in the morning and wax lyrical about.  Fortunately, this is pretty bad for you (it's basically almost entirely just sugar) and tastes wonderful, so no harm of it actually being one of those. 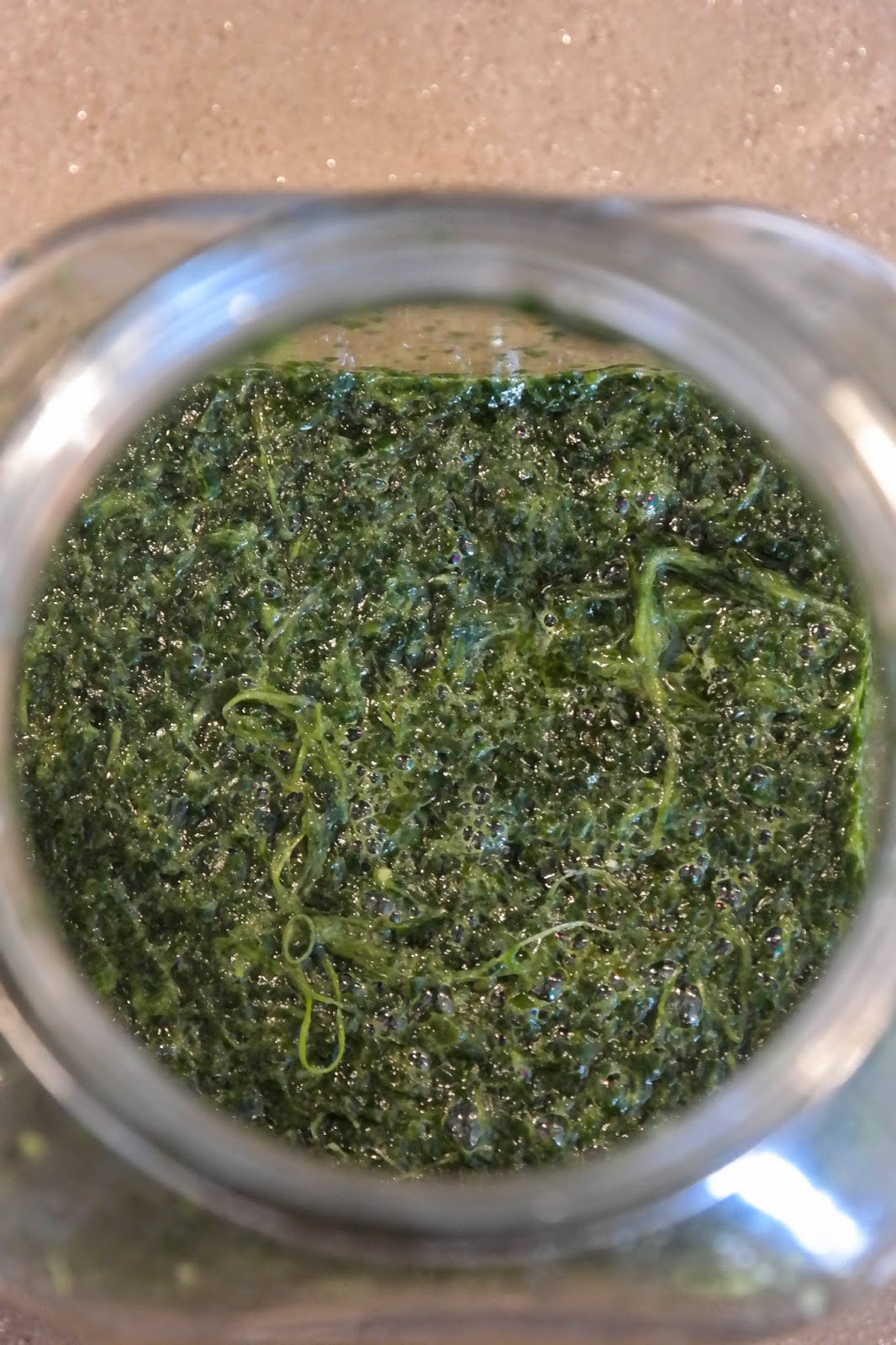 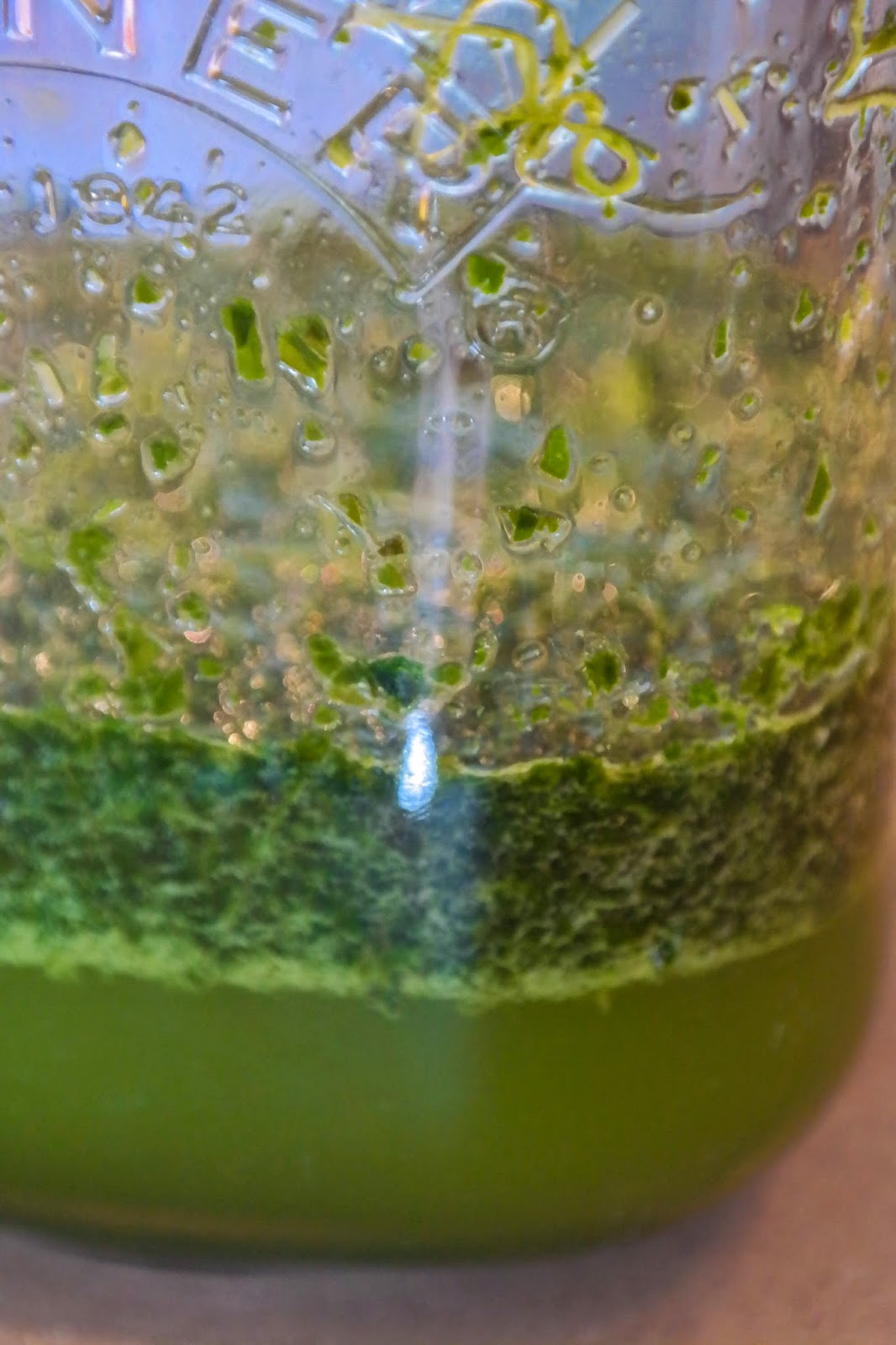 Put it through a sieve, using the back of a wooden spoon to force out as much moisture as possible.  If you're being super diligent you can put it through a muslin immediately afterwards, but I could not be faffed.  Once that's done it'll look even more like one of those hateful smoothies, but relax – it still isn't. 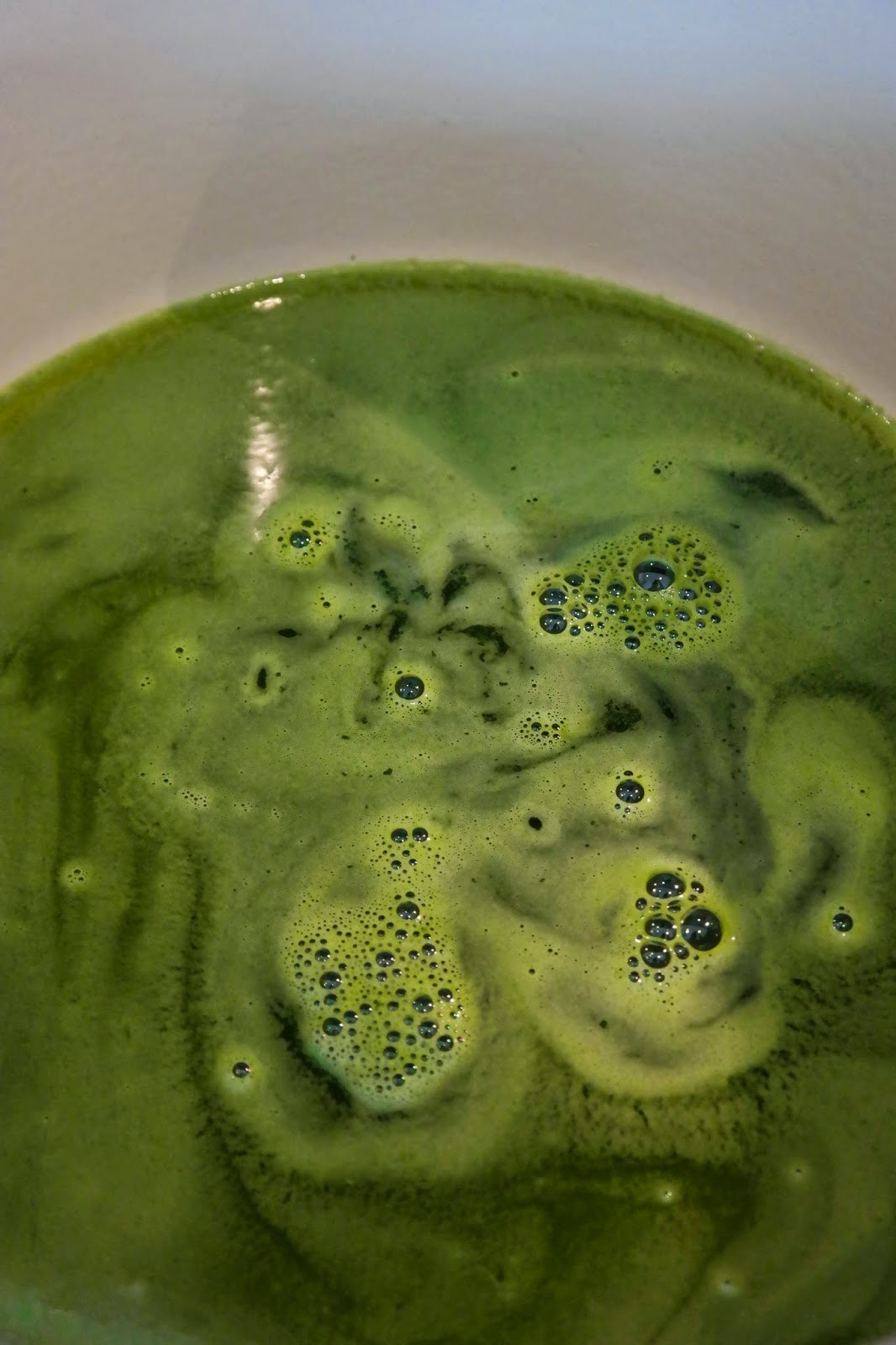 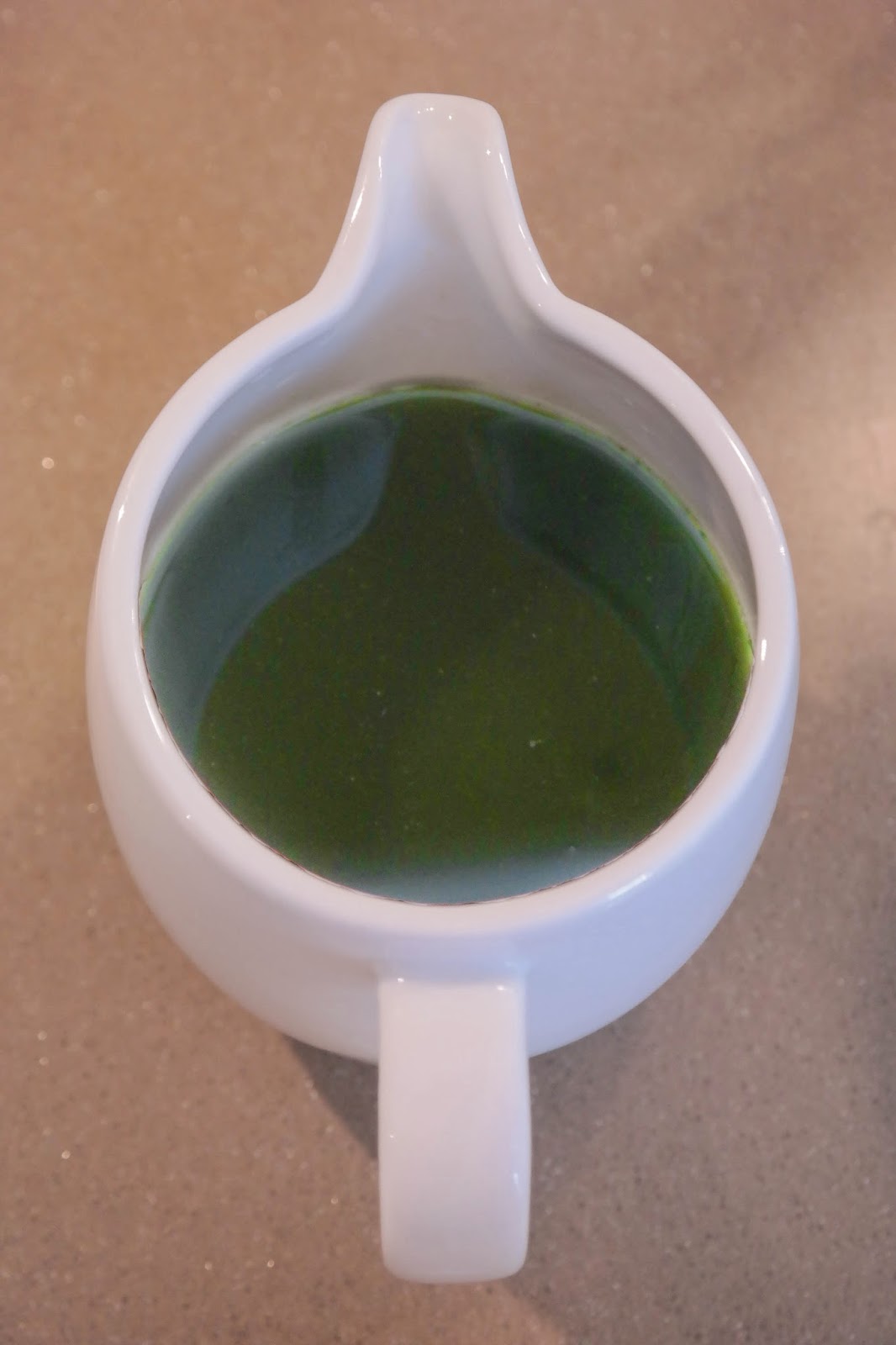 Add the lemon juice now, then stick a lid on in and let it cool right down to room temperature.  If you can, you could even stick it in the fridge overnight to cool it down ready for the churn (this is not essential, but it helps if you're using a frozen bowl churner).

5. Right, both mixtures should be cold now – or at least not hot.  If you're using an ice cream maker that's ben in the freezer you need to work pretty quickly.  The way this system works is that the frozen core of the mixing bowl will cool the syrup and freeze it, whilst churning the ice crystals.  The second law of thermodynamics, as immortalised by Messrs Flanders & Swann, dictates that that the entropy of an isolated system never decreases, because isolated systems always evolve toward thermodynamic equilibrium, a state with maximum entropy.  Or, put more simply, "heat can't move from the cooler to the hotter"  This means that the flow is not cold moving from the bowl to the syrup, but heat moving from the syrup to the bowl.  This only really has one practical application here: the syrup will never, ever get as cold as the bowl.  Your freezer will have dropped the bowl's temperature below 0°C (probably to something around -18°C if you've given it enough time) but it's now only getting hotter – both from the ambient temperature and from the syrup.  So the longer the bowl is out of the freezer, the less effect it will have on the syrup.  Similarly, the hotter the syrup at this stage, the less effect the frozen bowl will have.

So get moving.  Have everything prepped and ready to go – syrup in a jug, ice cream maker set up, everything it its place, before getting that bowl out the freezer.  Then, once it's out, go go go.

6. It's really very simple from hereon in, in terms of the sorbet at least.  The machine's makers should have given you some instructions, so just follow them.  Only thing I would say is this: it's a lot like making jelly from scratch: you follow all the instructions and then you get to this stage and nothing happens for AGES – and you're convinced nothing will – until suddenly you look down and it's basically a slush of ice crystals.  Mine took about 30 minutes to turn into slushie, a bit like this: 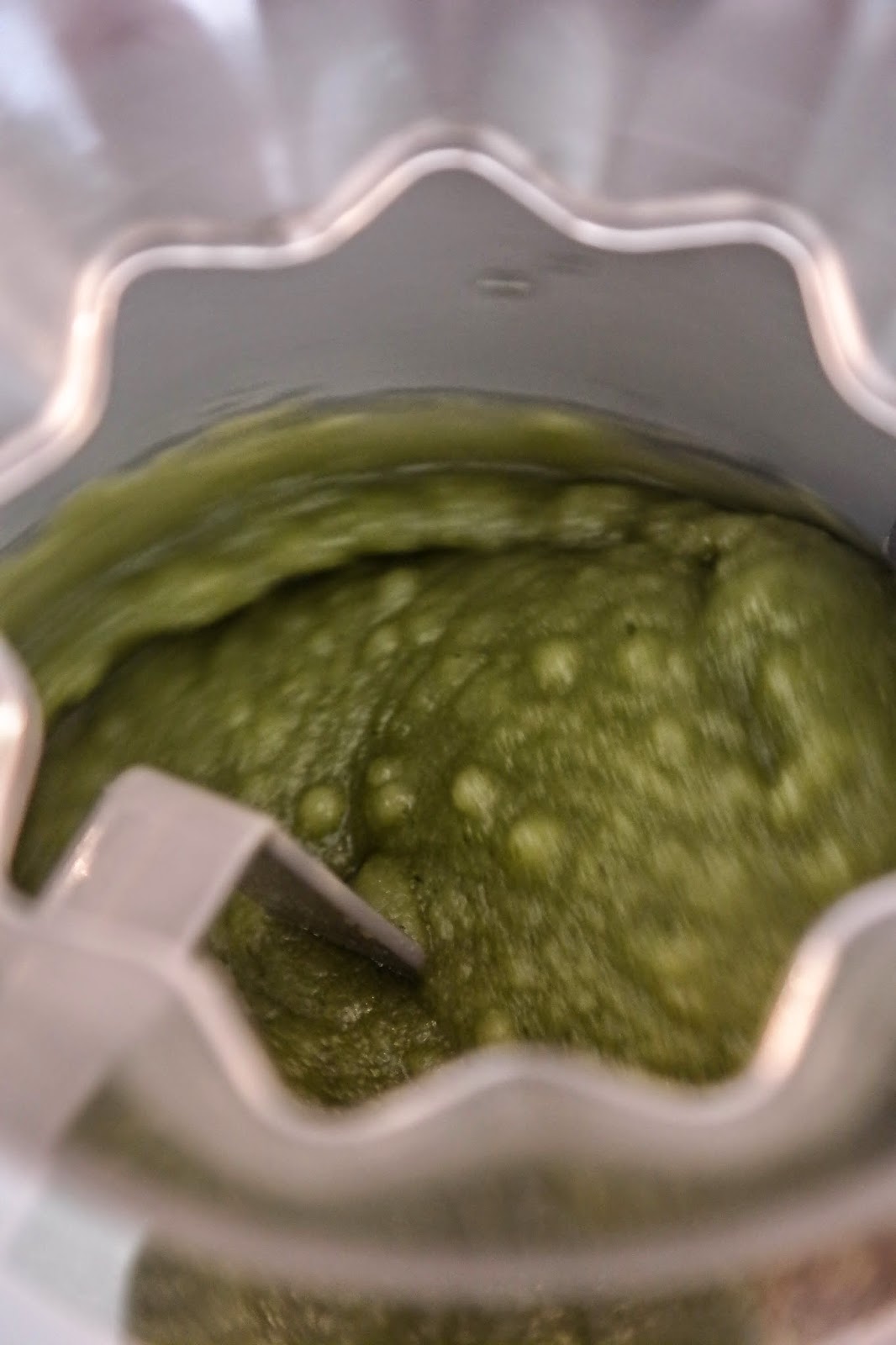 Ideally, I'd have it slushier, more like melting snow, but by this stage the bowl had lost most of its coolth (that's a word, OK?) and there's a risk that you end up reversing the process.  I think it was a combination of my bowl not cold being enough (it had only had 24 hours in the freezer) and the syrup not being cold enough.  Neither made a dramatic difference, but there's no reason to let that happen to you.

But anyway, once you get to this stage, you just scoop it all out with a spatula and get it into a tub in the freezer.  It'll need at least a couple of hours there. 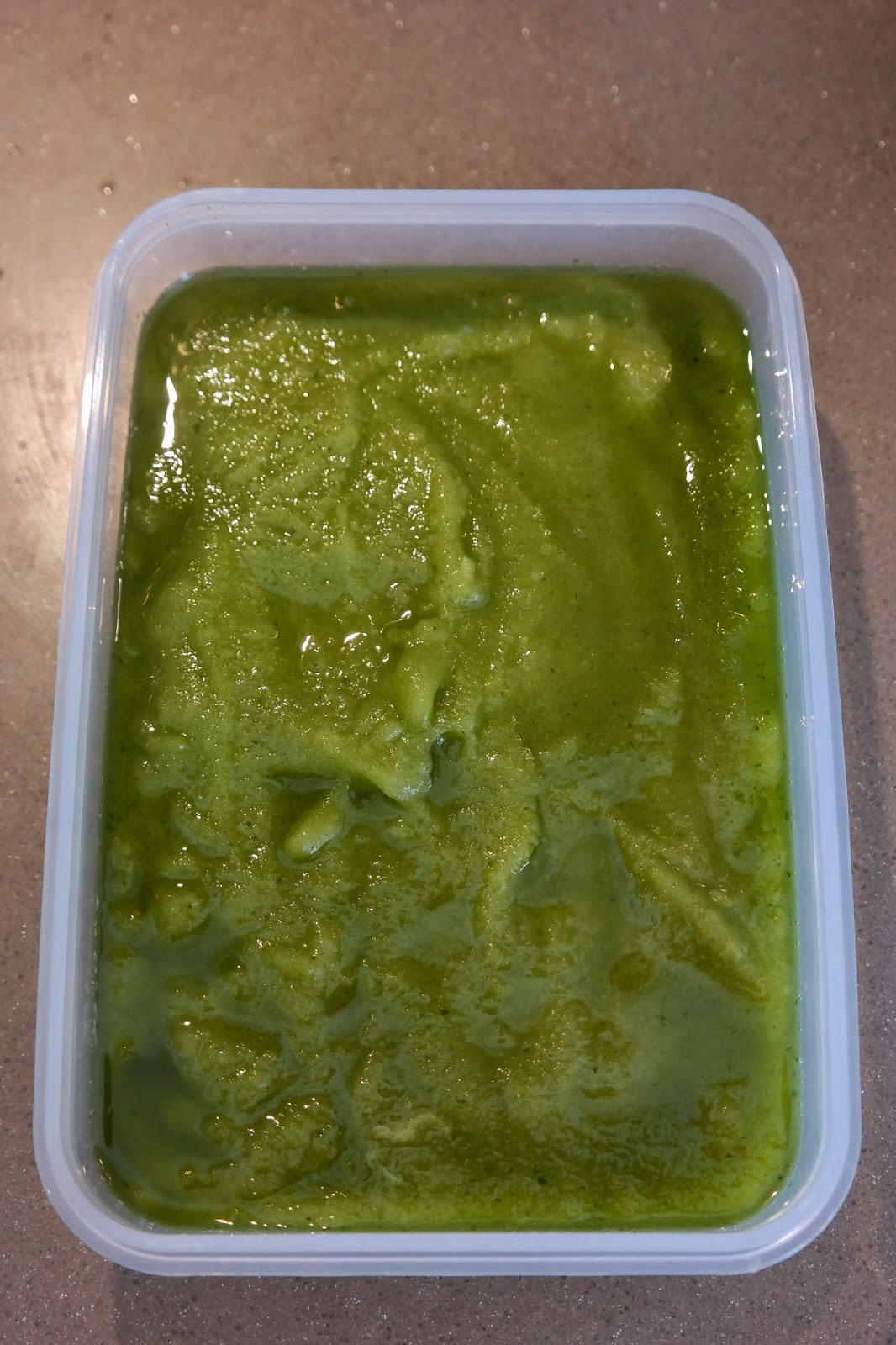 7. Returning to the balsamic strawbs... Your vinegar syrup should be cold by now.  Stir in the third and final tablespoon of vinegar.  Hull and quarter the strawberries and place them into deep dish.  Pour all of the vinegar syrup over them, turning them very carefully with a spoon to dress them like a salad.  Put them in the fridge for at least a couple of hours, turning them at least once during the process. 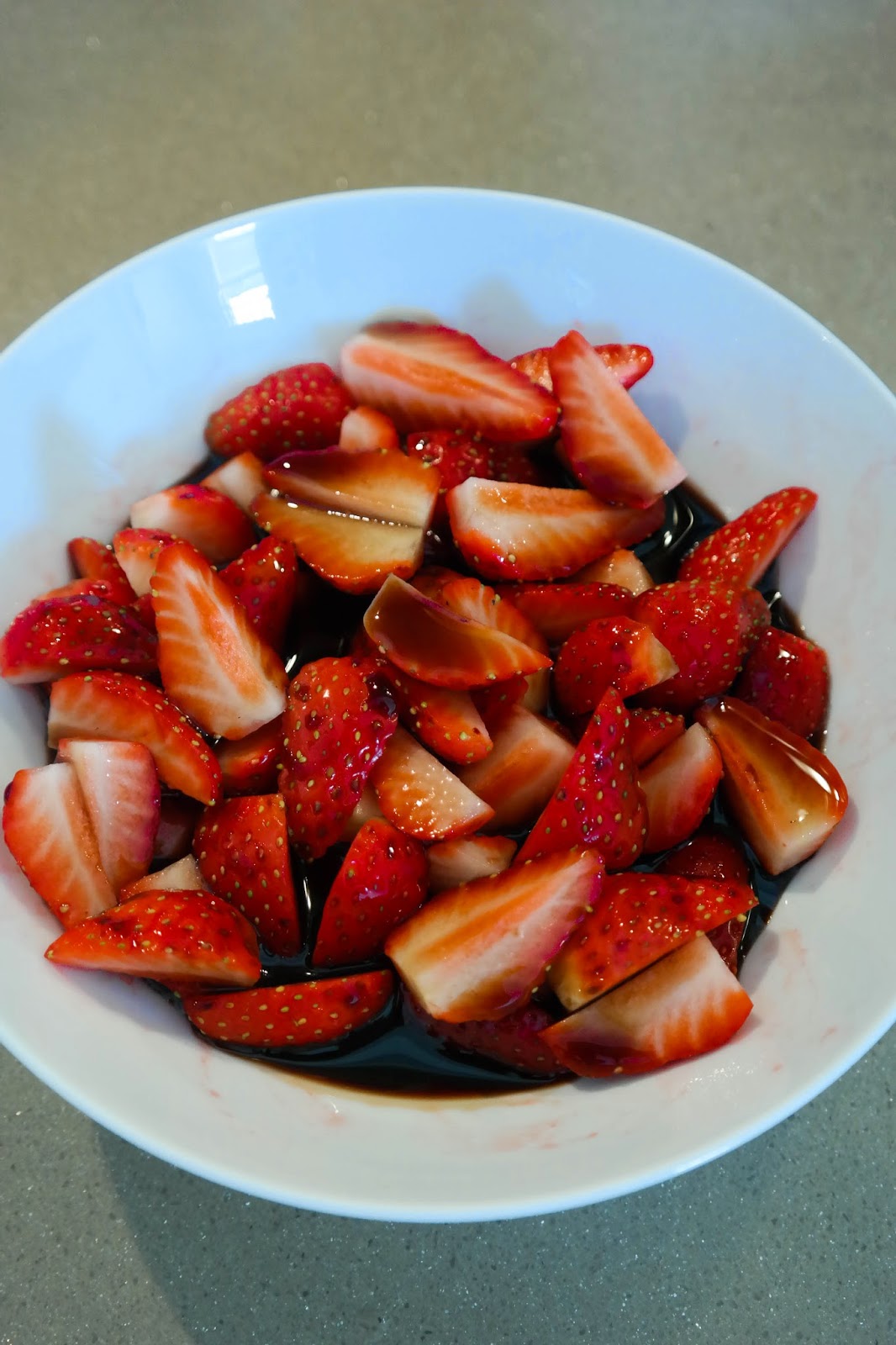 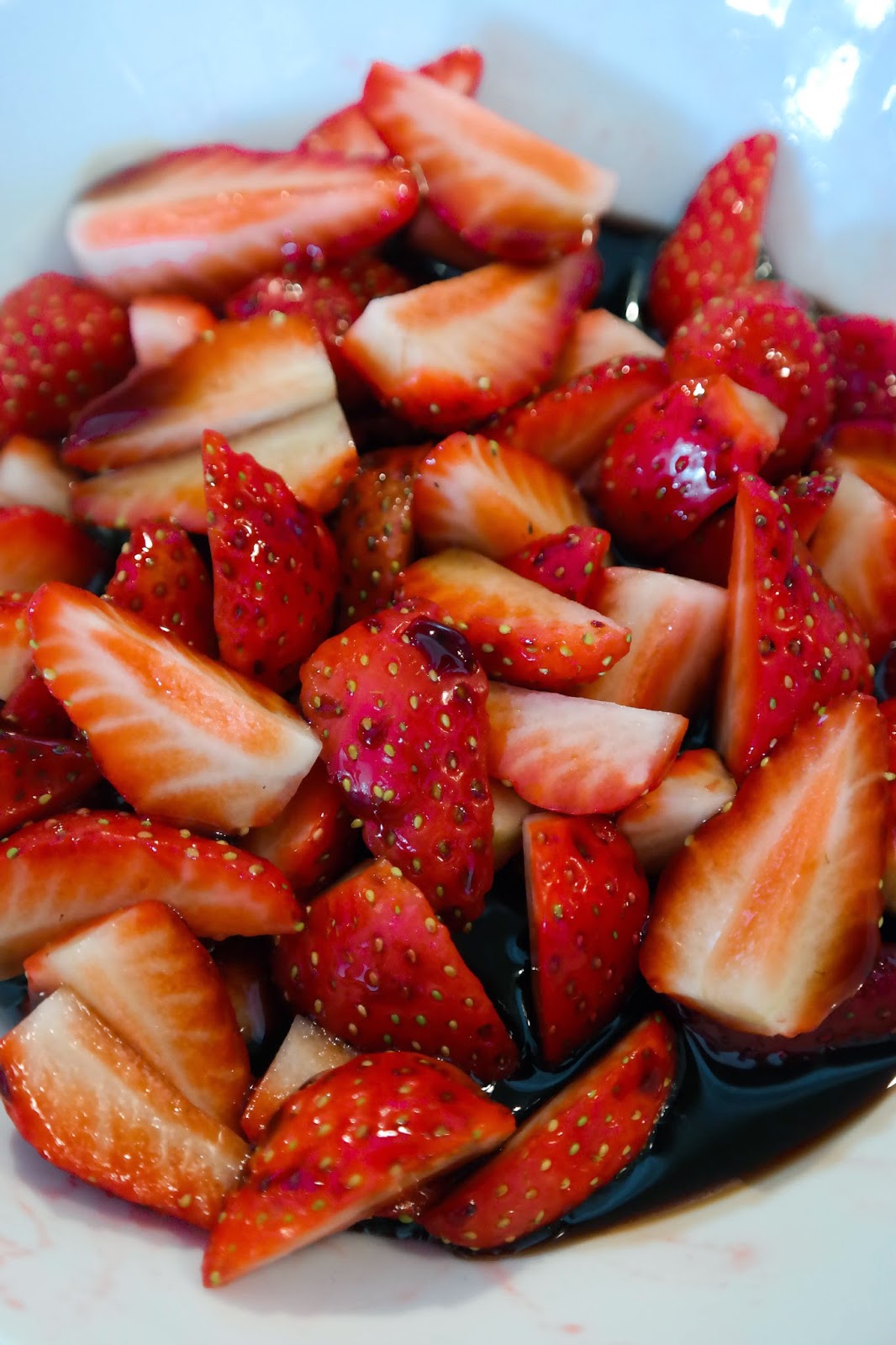 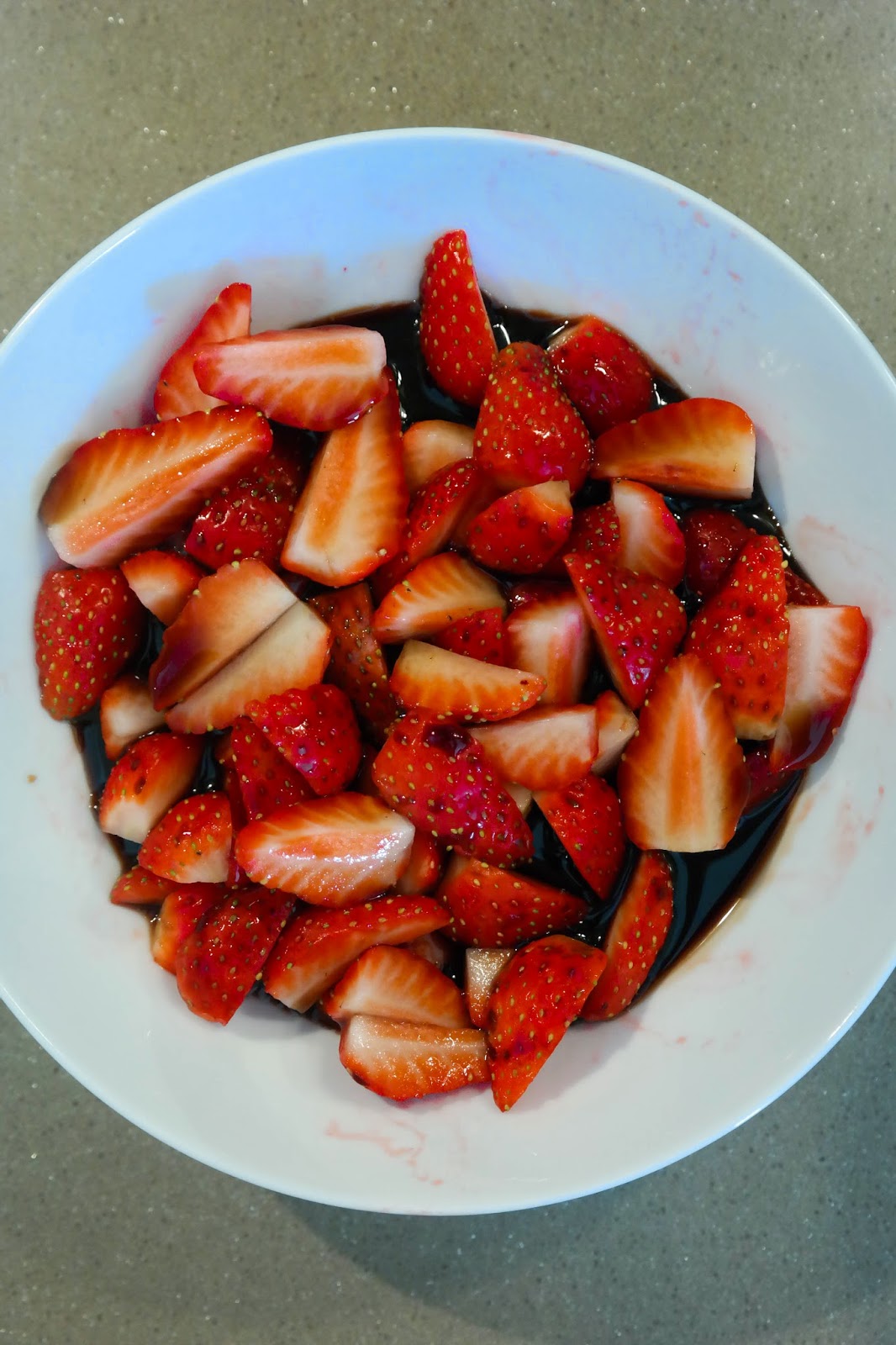 8. That's pretty much it.  When you're ready to serve scoop a spoonful of strawberries into the bottom of a bowl and add a wee bit of the vinegar syrup.  Then put a ball of sorbet on top and serve to some pretty impressed guests. 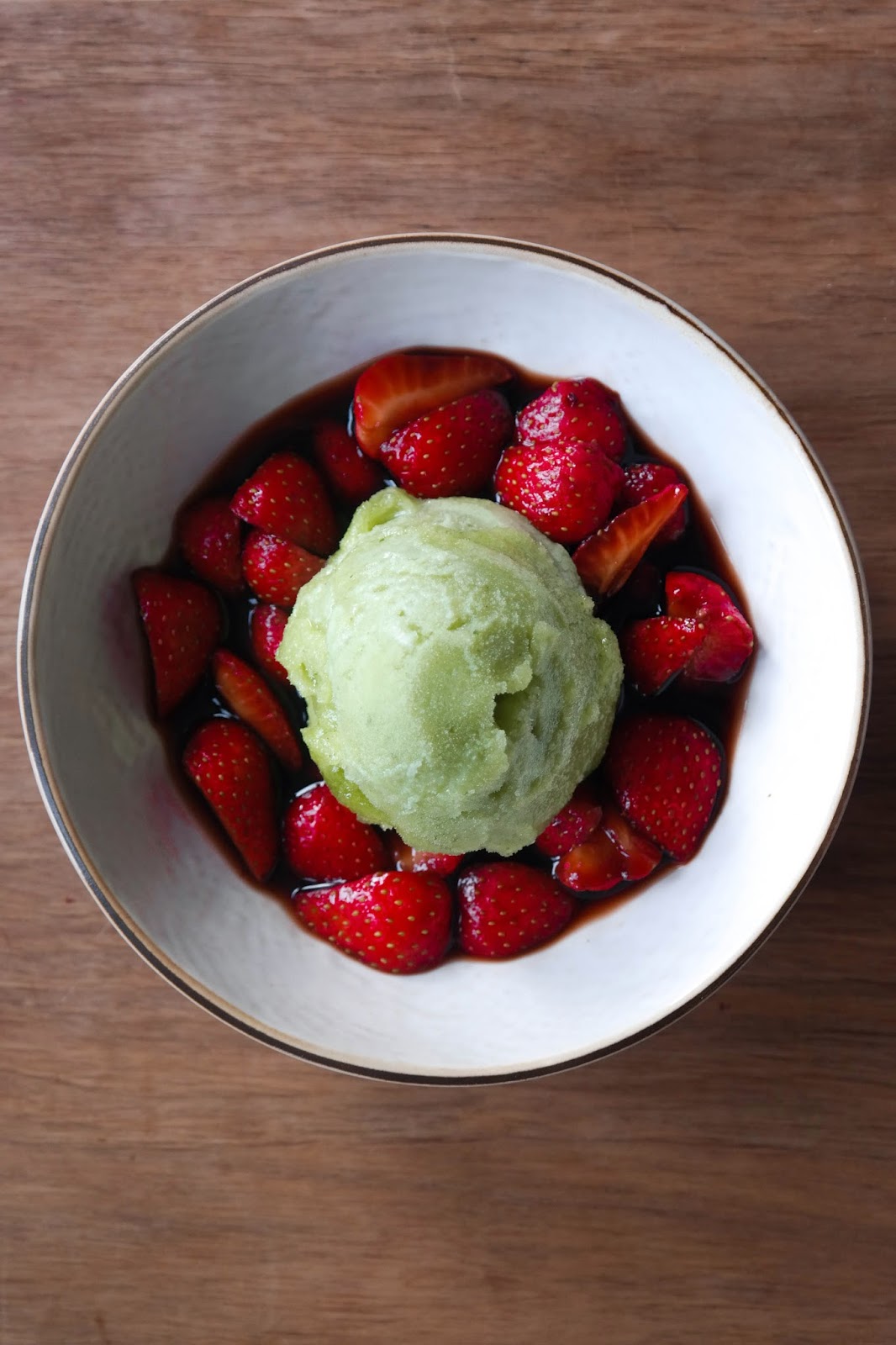 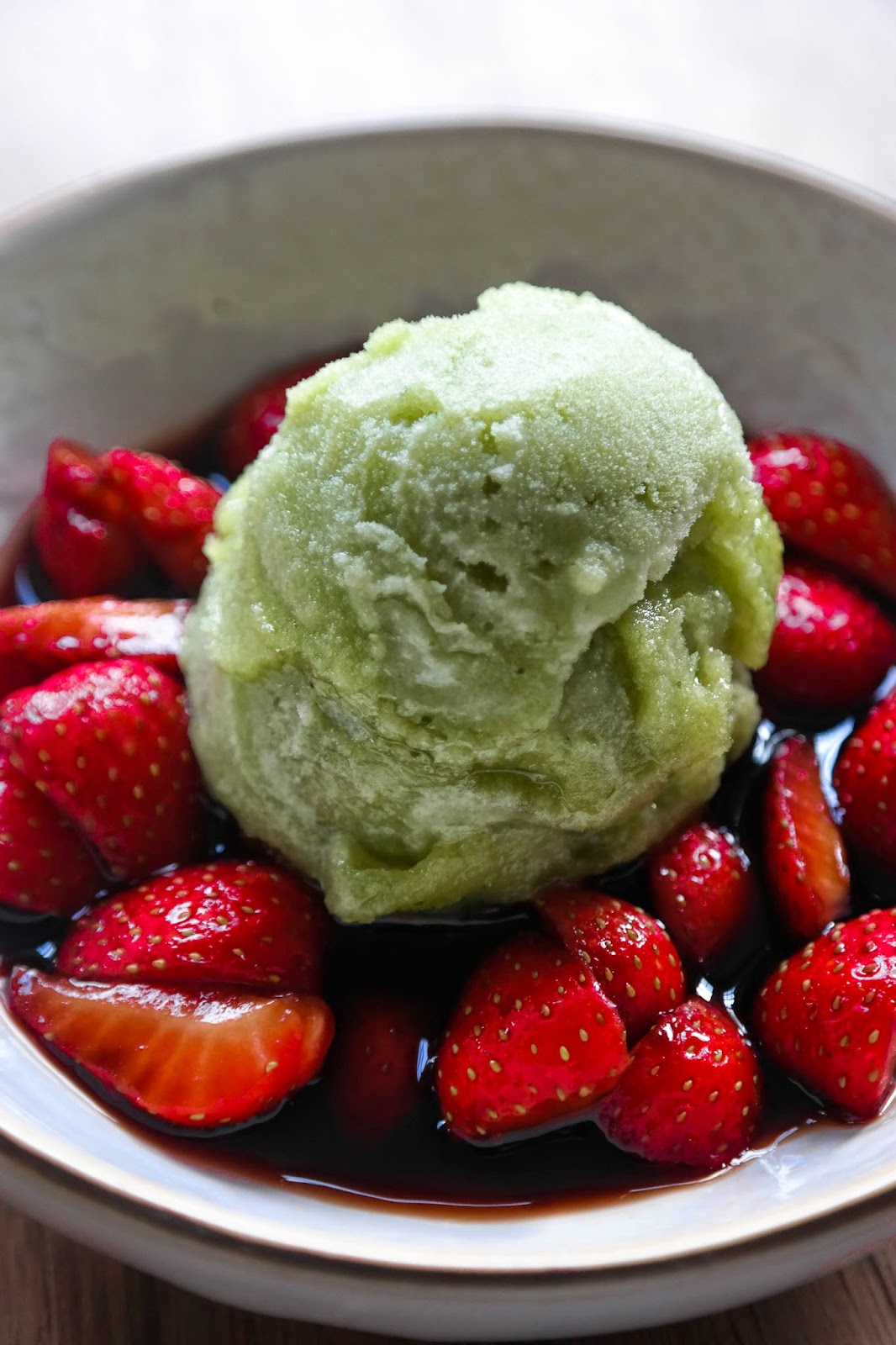 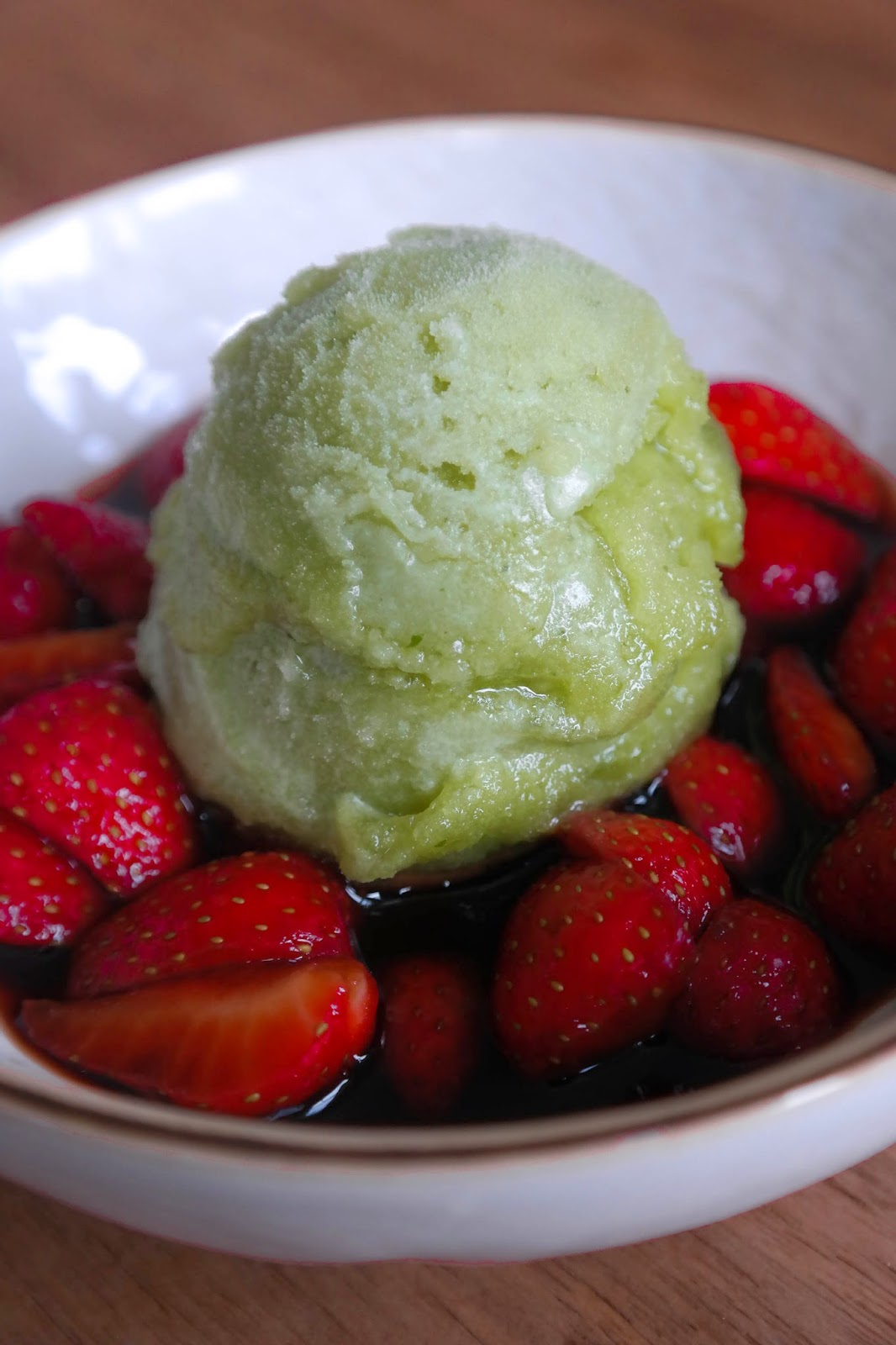