Coffee: Not sure, but supposedly kopi luwak
Origin: Vietnam - bought by a colleague's mum whilst on vacation
Price (per 250g): Not sure.  Expensive.

In a sense, I can hardly say how excited I was to try this coffee.  Kopi luwak is, without doubt, one of the most well know, exclusive, talked about luxury coffees in the work.  It's also amongst the world's most expensive coffees, as it has to be consumed by the Asian palm civet (known locally as a 'luwak') and then excreted (known colloquially as 'pooped out') before being gathered, roasted, ground, brewed and drunk.  Needless to say, this makes for some pretty funky coffee.  It also makes for a coffee that has Veblen good status – i.e. whose value is almost only generated by being valuable.  This shit (pardon the pun) is expensive. 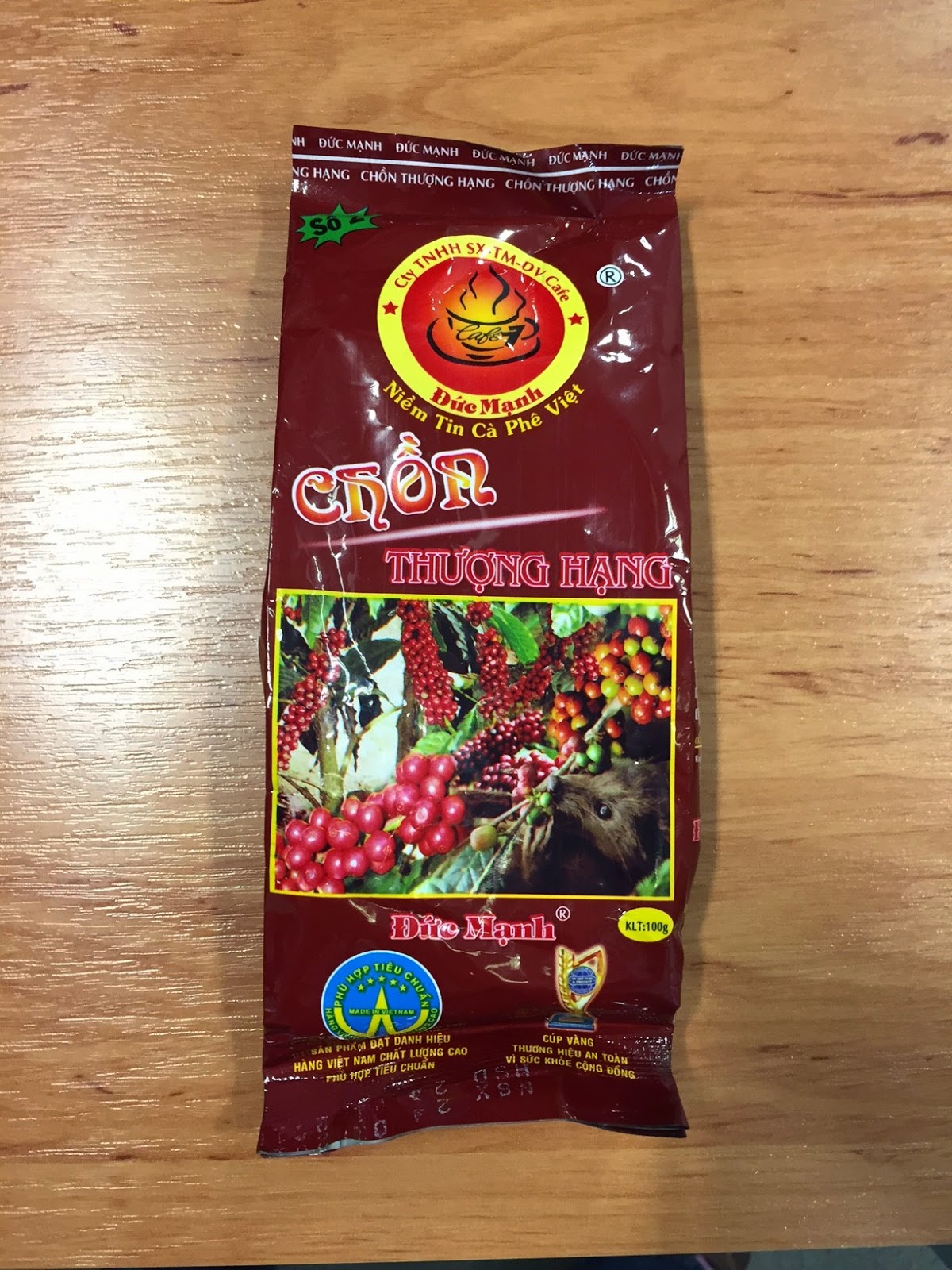 The smell of the beans is (to paraphrase Douglas Adams) almost, but not quite, entirely unlike coffee.  It smells of something else, something artificial.  Pink wafers.  You remember those?  It smells of pink wafers – something which, once I had suggested it to the panel, everyone agreed on.  Once brewed this smell fades slightly but remains, pungent and lingering, annihilating much else.  But in the background there is something else, a distinctly earthy smell, vegetal - dare I say, like manure.  And there, too, is a treacle or unrefined sugar odour and a hint of something industrial, like rubber tyres.

The first thing you notice on drinking it, however, is the texture – not the taste.  This is an oily coffee – very smooth, but like Singaporean Kopi O, where the beans are roasted in margarine and sugar.  And it's thicker than normal coffee, even though it's been brewed with a cafetiere like everything else we've tried.  And it is black.  Jet black.  And dark.  All at once. 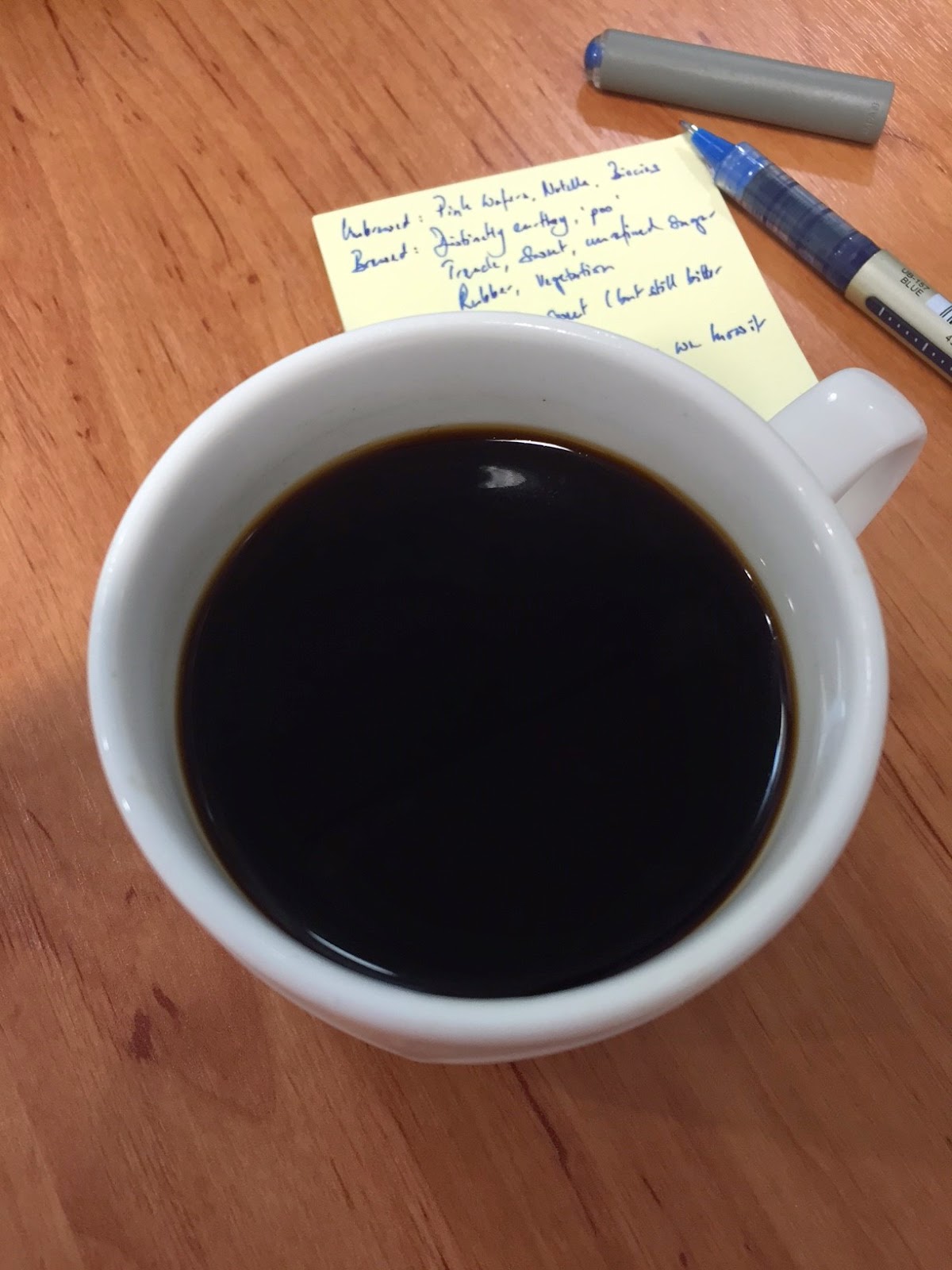 The taste is naturally quite sweet, but still with the bitter after tones we expect from coffee.  The biscuit flavour – and the pink wafer flavour – is still very much there.  There's also toasted almonds.  Does it taste of coffee?  I can hardly remember what coffee tastes like right now.  It's coffee, Jim, but not as we know it.  And not, I'm afraid, in a good way.

Caveat: Kopi luwak is really controversial, and with good reason.  What started as a coffee made from droppings found on the jungle floor is now an enormous industry.  Part of the justification for using coffee that's been pooped out by a civet cat is that the beastie is (supposedly) very discerning about what berries it eats, eschewing all but the ripest and brightest.  In a sense, therefore, luwak droppings are supposed to represent the very best of the best beans.  However, in the modern age and to keep up with enormous demand, luwaks are now kept in battery cages and force fed cheap beans that are then harvested.  SO (a) there's a pretty bad ethical thing going on here; and (b) the selective nature of luwak coffee is lost entirely.  So in summary what I guess I'm saying is that we just don’t know if what we've been drinking is any good at all.  So I am on the hunt for some ethically sourced luwak coffee that is affordable to see if it's any different and, if so, what's behind the buzz.