The best drinks are, without a doubt, simple.  Aside from the old fashioned, there is not a lot simpler (in my mind) than the humble whiskey sour.  Following on from a tradition of making mixed drinks to hide the harsh nature of badly distilled, cheap whiskey, it is a simple (albeit effective) mix.

Just as a quick note, I used egg white*.  Highly controversial – apparently this makes it a Boston Sour, but whatever.  You don’t have to use this, and reputedly it's lazy cocktail-craft, but I think it improves the drink as it adds a silky texture.  Any anyway, everything's better with foam. 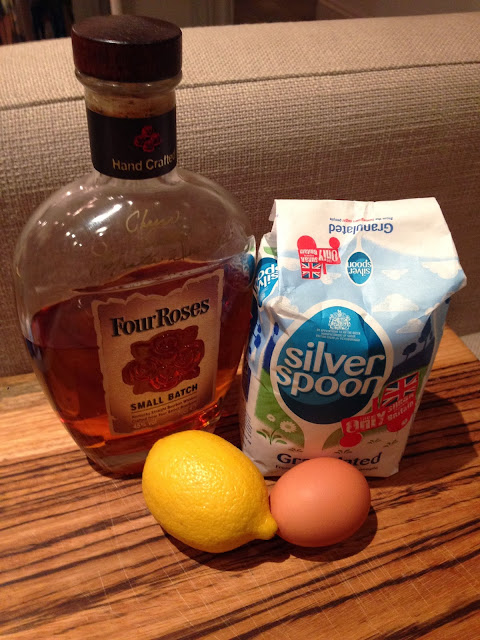 Juice of half a lemon
50ml bourbon (I've used Four Roses, which is just about the best easy-sippin' bourbon out there.  But this is a drink that can adapt to harsher, less refined bourbons – and actually benefits from it in some ways.  So you can even go as far as using good ol' Jim Beam if necessary.)
2 tsps caster sugar / 25ml simple syrup
Half the white of an egg

Put the sugar, juice and bourbon into a shaker and mix like hell until dissolved**.  Add the egg white and lots of ice and shake, rattle and roll.  When you're done, add more ice to a fresh glass and fill to the brim.

As this is an American whiskey drink, it can only really be served with two garnishes: A fat slice of fresh orange and maraschino cherries (make them here!). 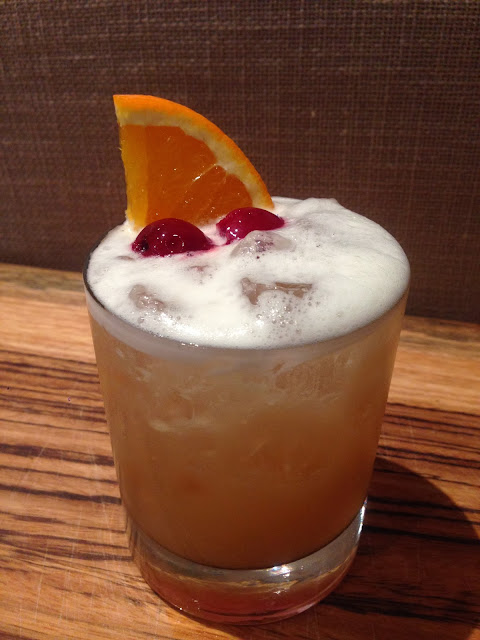 * I was about to say, omit this step if you're pregnant.  But, if you're making this drink and you're expecting, I'm guessing that the ingestion of raw egg is actually not your biggest problem...

** To make life easier for yourself, you could make a simply syrup for cocktail making that'll keep in the fridge for a few weeks: Heat equal parts sugar and water over a pan until the sugar's dissolved.  Allow it to cool.  Be proud of yourself.