I was initially rather vexed that I had to go to an out-of-hours meeting in King's Cross.  To be fair, it's not exactly far away, but it is in the opposite direction to home from my place of work, and I'm never keen to get further away from home after work has ended.  However, when GrubsterGirl noted that King's Cross was also the home of Caravan, a popular small plates joint, I was somewhat appeased. 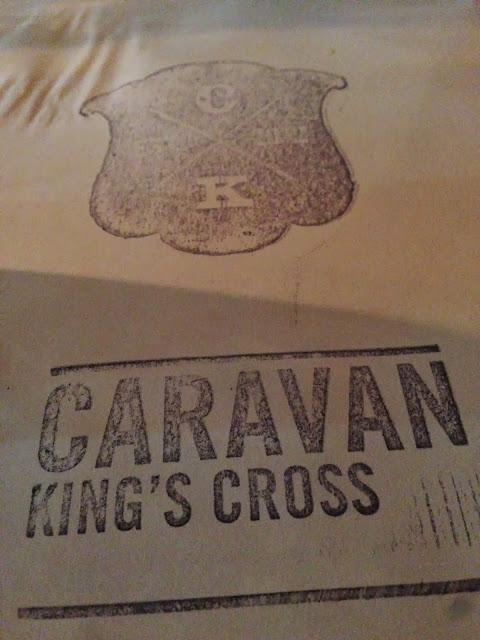 Sadly, there was no table available when we arrived.  Not to be deterred, GrubsterGirl and I got stuck into drinks at the bar.  The bar staff were amongst the friendliest, warmest barkeep I have ever met.  Not New York friendly, which can be grating and almost intimidating, but genuinely nice.  They even found stools for us.
I had a pumpkin sour – basically a whiskey sour with roast pumpkin purée introduced – which was heavenly.  GrubsterGirl treated herself to a bramble cocktail, with actual jam mixed in.  Similarly aces. 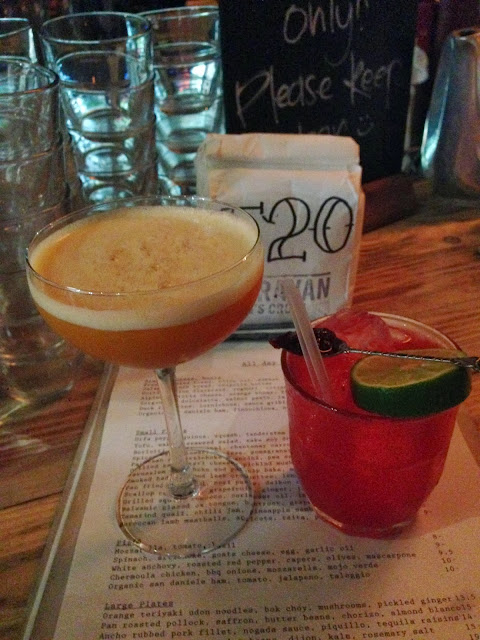 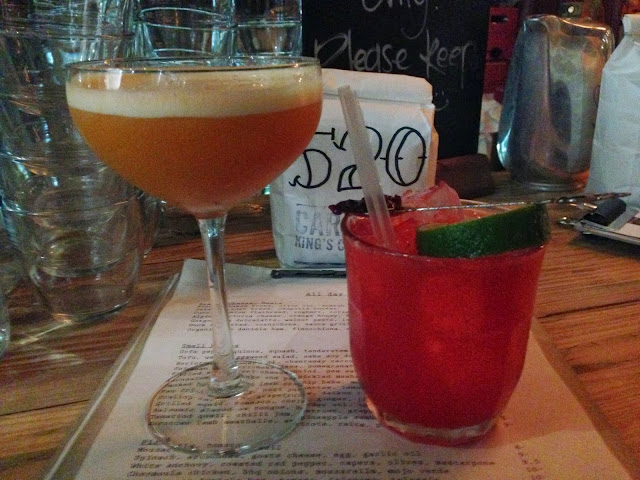 Given that we were told that we would have a forty five minute wait, we opted to open proceedings early with a curried onion, yoghurt and coriander flatbread.  When it arrived it was epic. 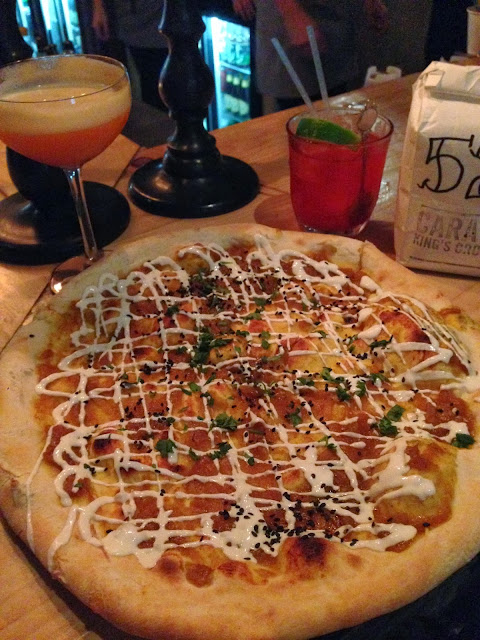 But soon – far, far sooner than the threatened 45 minutes – we were shown to our tables.  Now, Caravan is part of the modern trend of feeding people through a series of small dishes, rather than settling for the traditional starter-main-pudding effect.  What that meant was that GG and I were able to order away to our heart's content.  Which we did.
One of the great things about this place is how you can, seriously, have a half dozen meals in one sitting.  For example, our opening two dishes were seaweed an marinated tofu, a delicious Japanese style dish to practice our chopstick skills on... 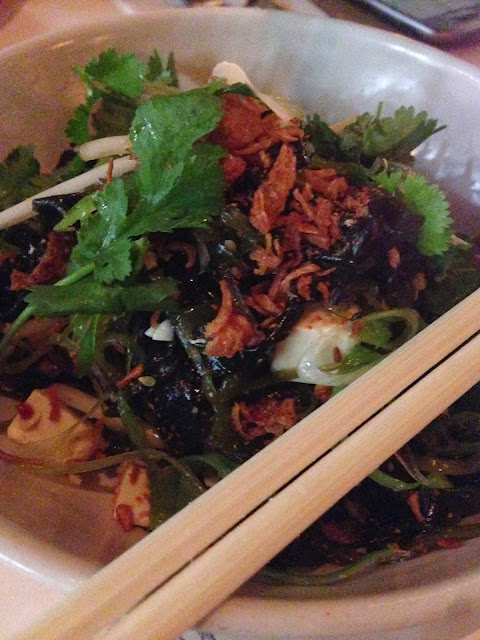 ...and then scallop ceviche, served with grapefruit, ginger, spicy popcorn, mint and raw beansprouts (to add a bit of crunch).  This was fiery as hell but absolutely top drawer. 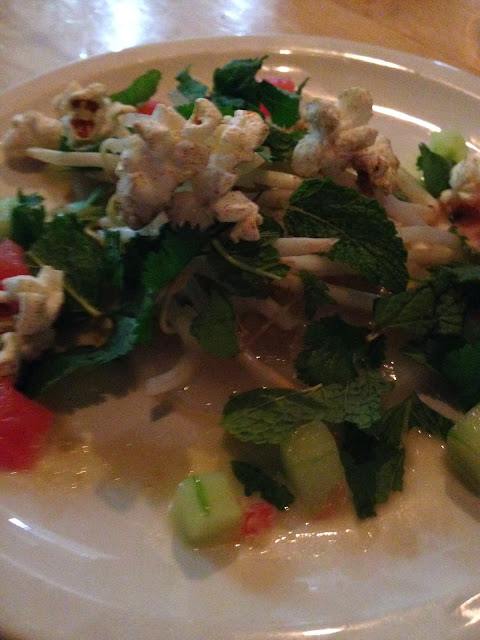 The dishes by now were flowing thick and fast.  Next out came the best meatballs I have ever had in the whole world, big, thick juicy cannonballs of lamb flavoured with North African spices and apricots and set in a beautiful red sauce. 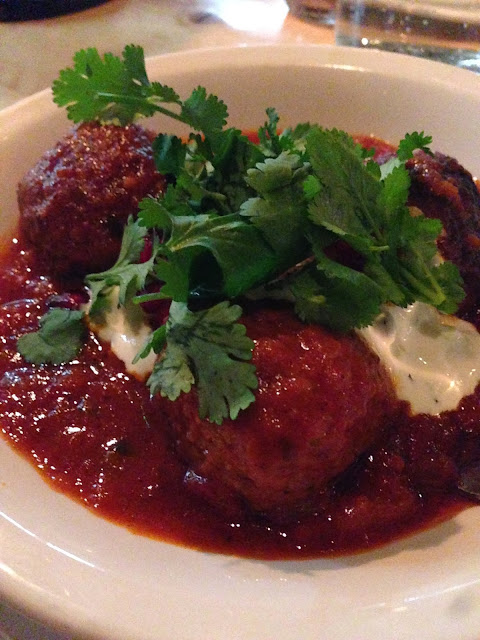 We had a quinoa salad as well, which was decent if a little unexciting.  Nevertheless, the addition of toasted pumpkin seeds was inspired, adding bit to an otherwise slightly mushy dish.  It was also wonderfully more-ish. 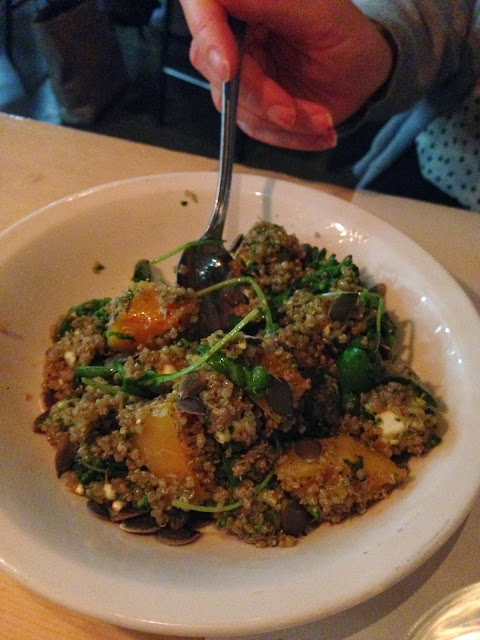 Then there was the squid, which was to die for.  Served with romesco and a massive smear of its own ink, it was properly yummy and not even the slightest bit rubbery. 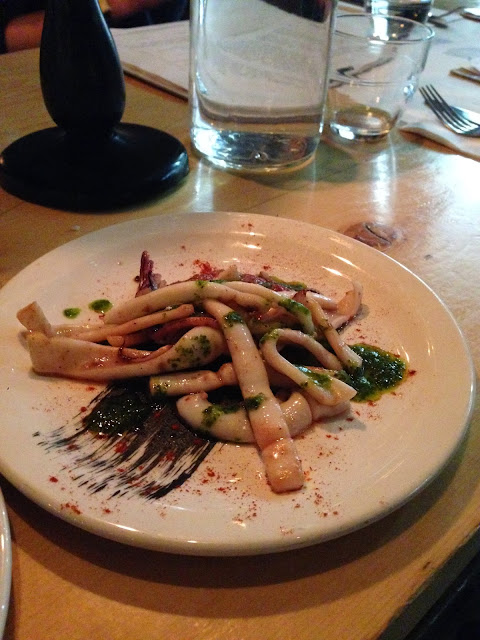 The restaurant is housed in the old grain store.  The whole area is undergoing a massive, Docklands-esque facelift that I am sure will create a buzzing and vibrant community behind the recently revamped station.  The building has been properly revitalised, including an awesome illuminated water feature out front. 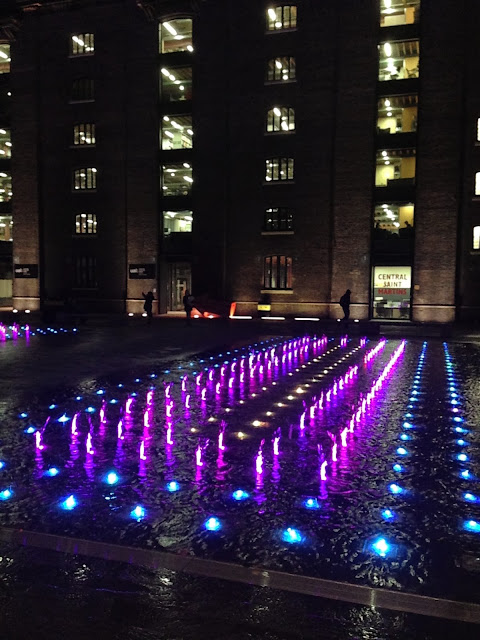 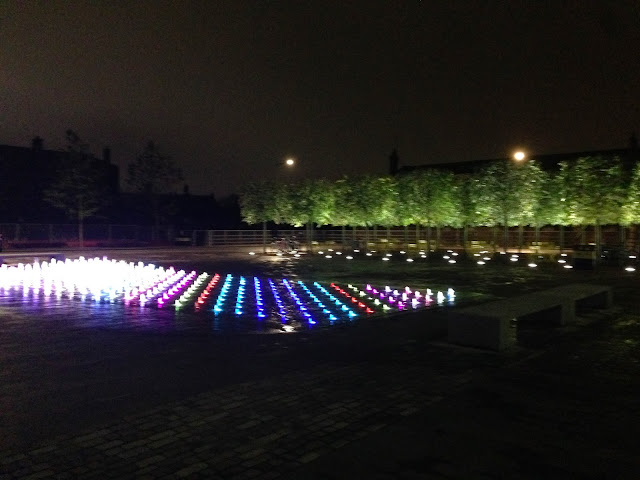 The venue itself is sports the ultra-trendy industrial chic look, with massively high ceilings.  Usually, the combination of these factors strikes fear into me, as nine times out of ten it means that the room is going to be fearsomely loud.  Fortunately, this was not such a case.
Caravan adds to its surroundings with cute little touches as well – whether that's the clipboard menu or the bag of flour queue number.  Classy joint, love it. 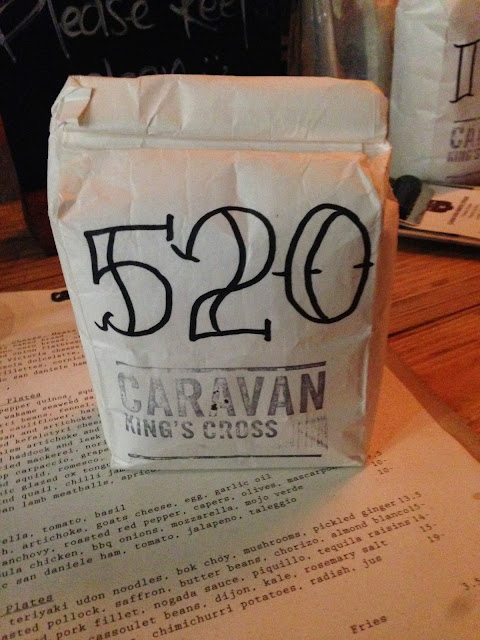