Ever since I was a kid, on a cold, blustery night, I have always found a bowl of risotto a hearty, comforting meal.  There's something about its thick, rich flavours and textures that can always make me feel at home, safe and warm in doors.
This is a recipe that a friend suggested years ago when we were all at university.  A bunch of us had rented a wee cottage up in the Highlands, in a beautiful little town called Portknockie and had spent the time wrapped up warm against the bitter December / January frosts.  I've played around with it a bit since then, but the basic premise – marrying the spicy, Moorish flavours of chorizo with the earthy goodness of mushrooms endures.
Ingredients:
½ to ¾ of a chorizo (get the real thing, the whole sausage, not sliced spicy salami)
250g chestnut mushrooms (button chestnuts work best)
25g dried mushrooms

1 white onion (I've used shallots only because they needed eating up – normally I'd use an onion)
2 garlic cloves
300g risotto rice
187ml white wine (that's a weird number but it’s conveniently – and by no means coincidentally – exactly one of those little, single serving bottles)
500ml chicken stock (or a bit more if you have it to hand)
50g salted butter
100g parmesan (plus a bit more to sprinkle on top, if that's your thing) 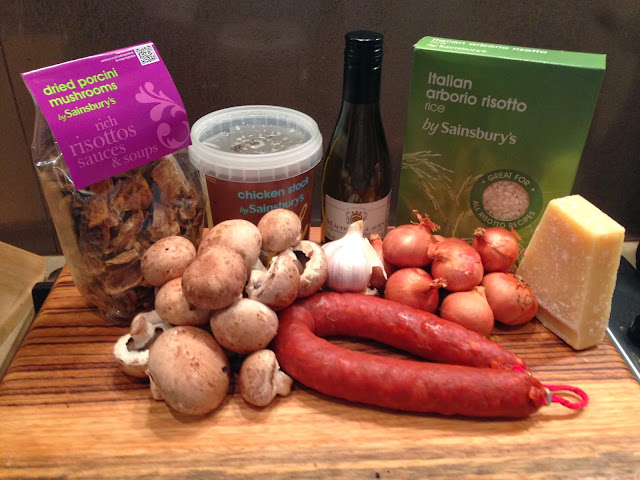 1. First, put your dried mushrooms into a jug and pour over plenty of boiling water – at least 300mls – to rehydrate them.  They need at least 10-15 minutes, so do this at the outset.

2. Now, chop the onions finely and the garlic very finely.  Slice the mushrooms.  Chop the chorizo into matchsticks, about a half centimetre across – you could also cube it, but I prefer matchsticks.
3. Stick the chorizo in the largest frying pan you have.  It doesn’t need to have a lid.  You really, really don’t need to add any oil – I know this sounds unnatural, but very quickly the fat in the chorizo will melt out, and that's all the oil you're gonna need for this dish. 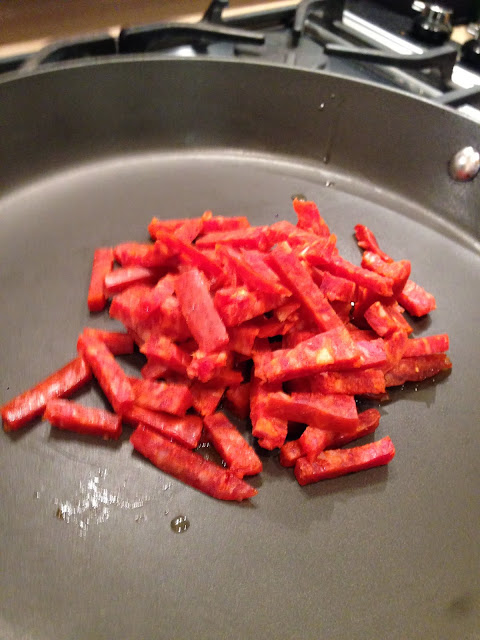 Once the chorizo is browned off, and lots of fat has been rendered out, remove it from the pan with a slotted spoon and put to one side. Resist the temptation to eat it as much as you possibly can. Leave behind all of the fat. 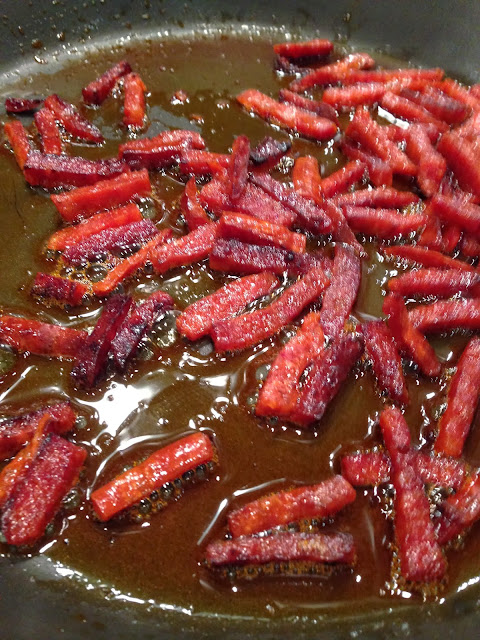 4. Soften, but don’t brown, the onions.  When they're almost there, add the garlic too.  The paprika from the sausage will give the whole pan a wonderful orangey hue. 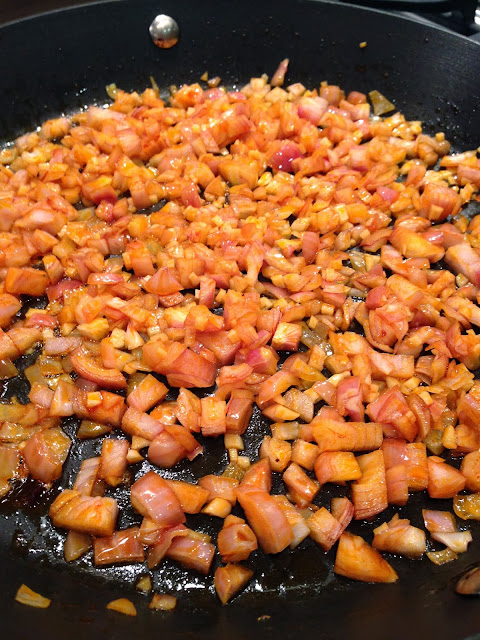 5. Whilst the onions are softening, it's time to deal with your now somewhat less dry mushrooms.  Now, you want to preserve the liquor they've been in as far as humanly possible because it tastes phenomenal and we're going to use it to cook the risotto.  However, the problem you have is that dried mushrooms are covered in grit, so you want to separate that from the water (and, indeed, the 'shrooms).
So, first, strain the mushrooms using muslin or (in a pinch) a coffee filter paper.  I've even known people to put it through a cafetiere, but I'd be worried that (a) the mesh isn’t fine enough and (b) the mushrooms will end up tasting like coffee.  When the liquid has drained give the cloth a really good squeeze to get as much flavour out as possible. 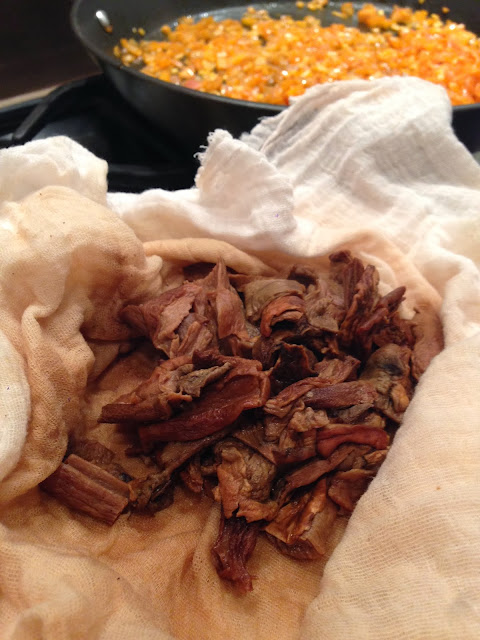 Next, stick the mushrooms in a sieve and give them a quick blast with water from the kettle.  You can lose this water – it's there simply to wash off any residual grit.  Put the mushrooms into the rinsed muslin / a new filter and give them another squeeze, this time preserving the water.
Once that's done, you should have some rehydrated dried mushrooms and a jug full of mushroom liquor.  Chop the mushrooms up medium finely. 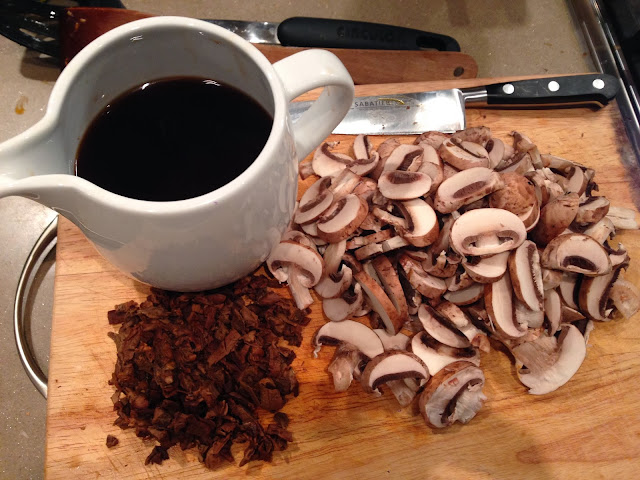 6. Once the onions and garlic are soft, add the sliced fresh mushrooms and dried mushrooms to the pan and soften, but again try to avoid browning anything. 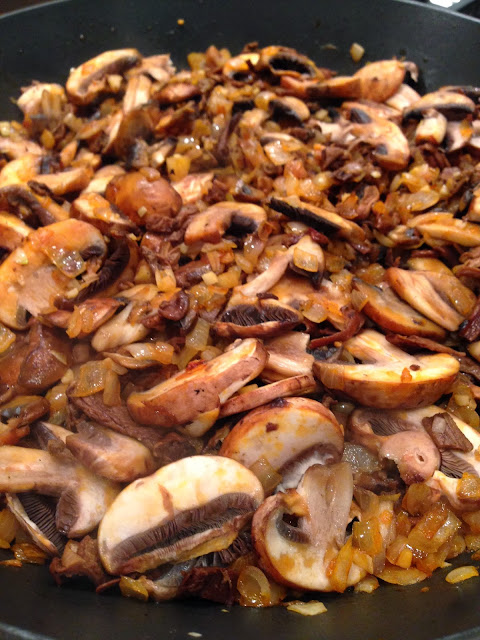 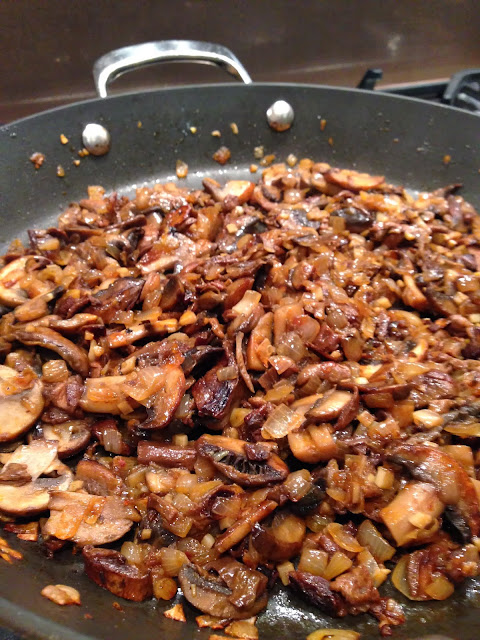 7. Reintroduce the chorizo to the pan, and introduce it to new friends mushrooms, garlic and onion (I actually forgot to do it at this stage, but it was far from critical).  Add the risotto rice and stir everything in, so that the rice is covered with fat.  Turn the heat all the way up for a minute or two. 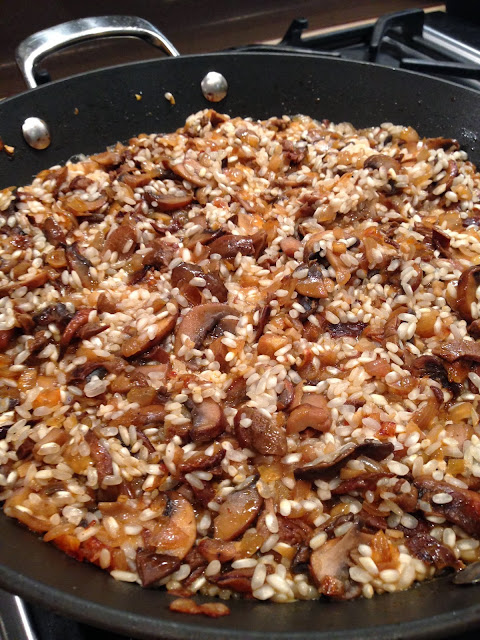 8. Leaving the heat up at its highest, add the wine – all in one go.  Without stirring or even touching the rice, let the liquid cook off.
9.  Now, the long, boring part.  Turn the heat down to about one-third.  Ladle by ladle (or slightly more if you like) add all of the mushroom liquor, stirring the whole mix up with each addition and cooking off each time.  At its most liquid, you should get tiny, simmering bubbles.  Once the mushroom liquor is used up, start adding the stock.  Taste it from time to time – it should take all the stock, and you may even need more / some boiling water from the kettle – but there's no harm keeping an eye on it all.  You want it just al dente. 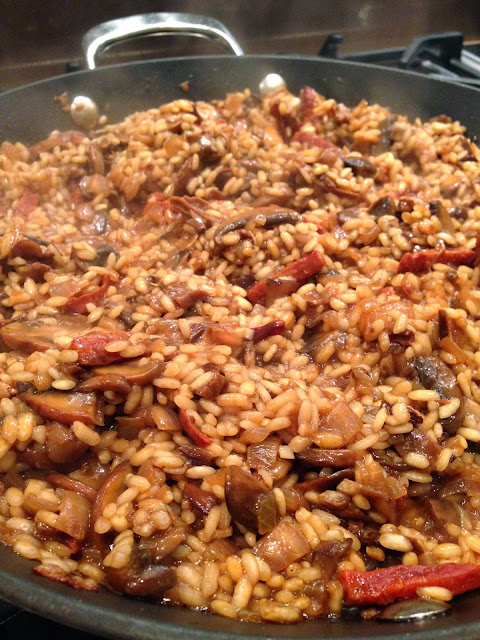 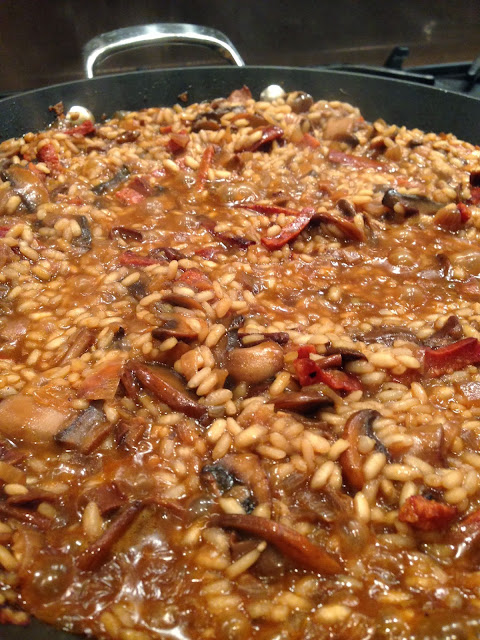 10. When the risotto is cooked and at your preferred level of bite, turn the heat off completely and add the butter and parmesan.  Season well with pepper, but remember that the saltiness of the stock and the parmesan will have added a lot of salt, so taste before seasoning.  Mix it all up so that the cheese and butter are fully melted and combined. 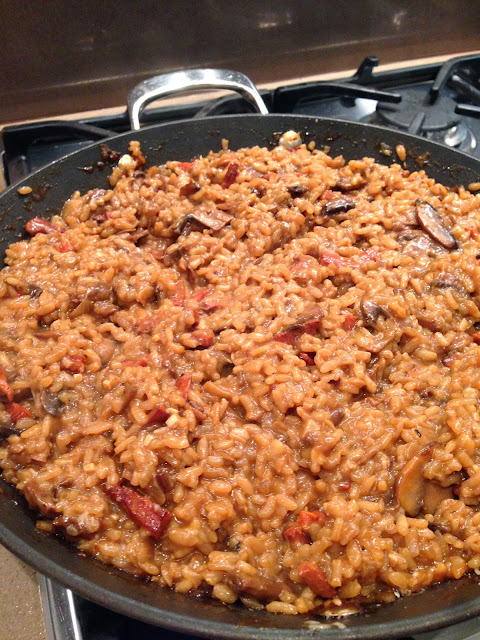 Serve sprinkled more cheese if you like that kind of thing. 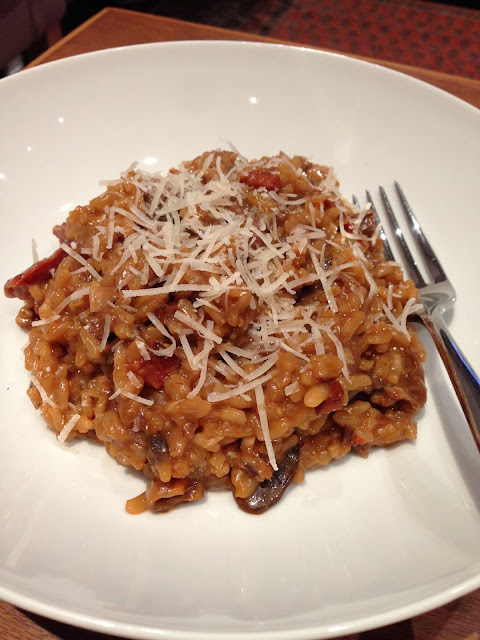 This makes a great dish for four hungry folk, or sits nicely in the fridge for a few days if you want to make something to eat through the week.
- GrubsterBoy -