Hawksmoor is flipping brilliant.
If you haven’t heard that before, hear it now: Hawksmoor is flipping brilliant.
I don’t believe you can’t have heard that before, though.  Seriously, this has become one of London's hottest restaurants.  So much so that they've open four branches and a bar, floated on the money markets and opened a kith-and-kin mini-variation, Foxlow, aimed at providing the same quality for a wider audience.  You always, always have to book in advance – forget walk-ups, even on quiet nights these days.  And they can do all that not because I say that they're flipping brilliant, but because everyone says that they're flipping brilliant.
So when it came to picking a birthday dinner venue for GrubsterGirl, I could think of little better than a big, indulgent, slap-up meal at our favourite place in town: Hawksmoor Seven Dials.
Opening proceedings were the starters.  For me, it was brown shrimp on toast.  Beautifully sautéed in melted butter and herbs, set on a light sourdough slice, these rocked my world.  I have had potted shrimp cold more times that I can recall, and loved them each time.  But I have never before had brown shrimp on toast warm.  This immeasurably improves them, bringing the flavour out completely and bringing the taste of the sea to life. 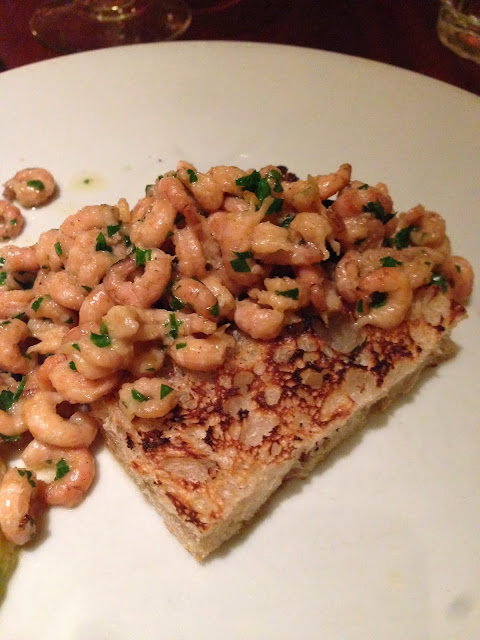 GrubsterGirl tucked into her lobster cocktail, a big silver goblet of chopped lobster tail and Thousand Island dressing.  The key here is to get the dressing right.  Too often it's so rich that it completely masks the lobster (or shrimp, as is more common).  Here no such mistake was made.  Here it only enhanced the dish. 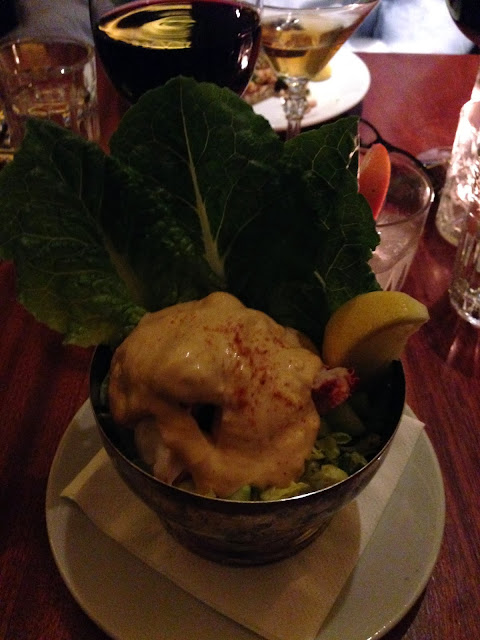 For mains we tucked into glorious, trick fillet steaks.  We've shared the chateaubriand on previous visits but sadly that was not to be this time – the smallest on offer came in at 950g, a cut of steak we once shared with GrubsterMummy and GrubsterDaddy and still couldn’t finish between the four of us.
Hawksmoor grills its steaks over charcoal and the proof is in the eating, as it were.  It's a true revelation – go to anywhere else that pan sears them and you'll instantly see the difference.  Good as they are, the charcoal roasting really adds a depth of smoky flavour that, I'm sorry, you simply cannot get from a skillet, no matter how hot you get it. 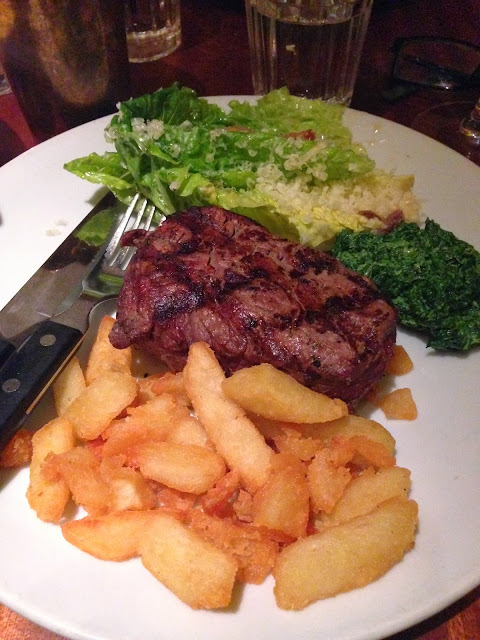 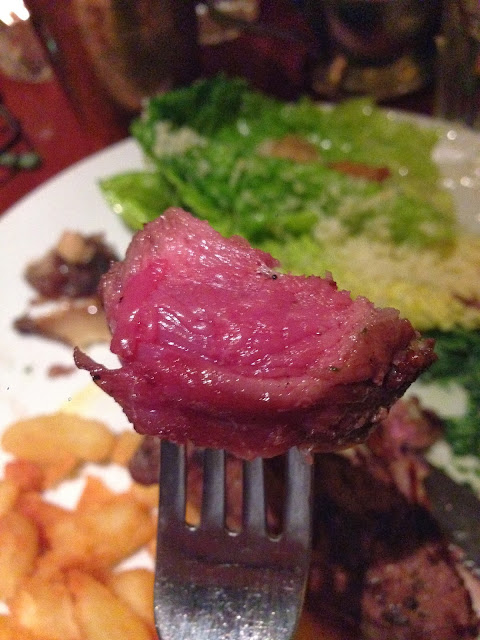 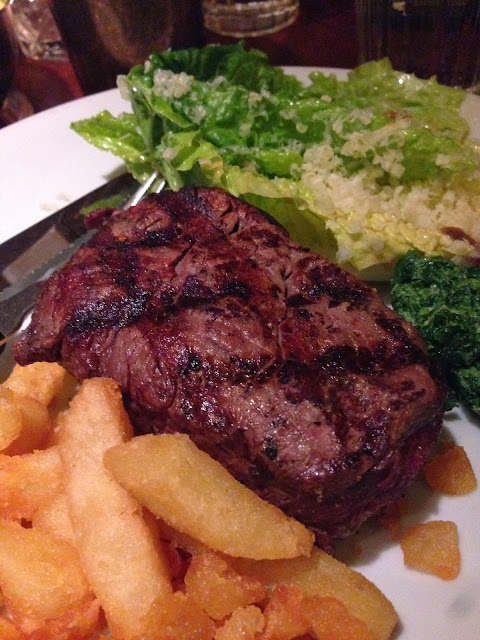 Hawksmoor also get a lot more right beside the steaks.  I've already told you about the starts and how good they were.  But there's also the side dishes.  We had triple cooked chips (thank you, by the way, Heston for giving us these – you're a genius), although you can opt instead for fatter chips cooked in beef dripping.  Actually.  On the side we added a delectable stilton hollandaise – not to pour over the beef but to use as a dipping sauce for the chips.  If you're not into that (and you should be) then the homemade ketchup's pretty damn good too.
We also had bone marrow – a bargain at the price, and a beautiful addition to the steak – I recommend smearing it on like you might smear mustard or horseradish.  We also had beautiful creamed spinach. 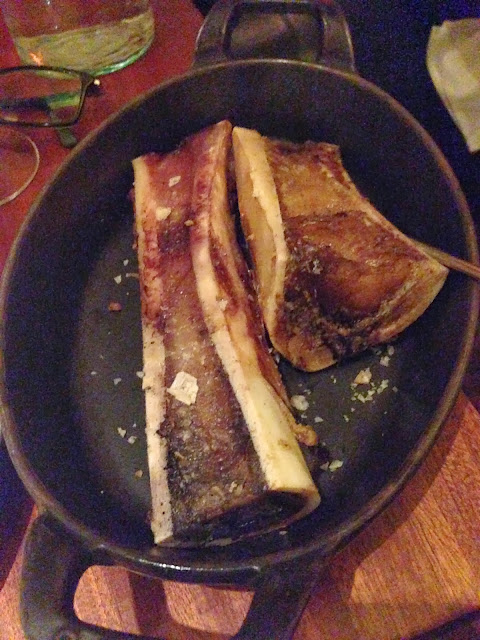 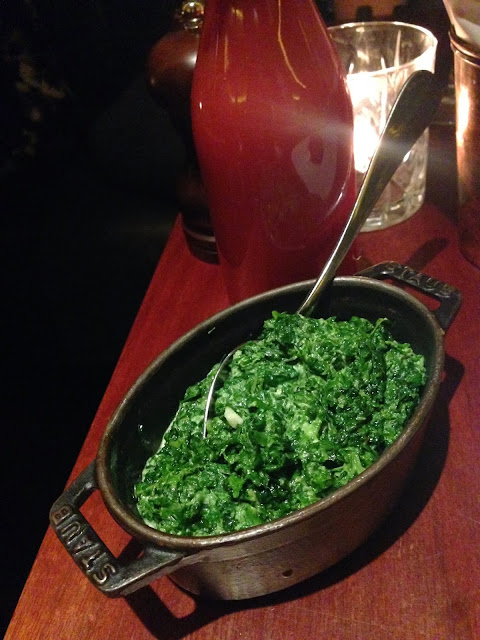 For pudding... Well, we were pretty done by this stage.  Proper stuffed.
But still we managed to cram in a couple of scoops of ice cream or sorbet – in my case blackberry, in GG's case salted caramel and popcorn.  Also, by way of celebratory treat, with coffee the staff were kind enough to give us some of their salted caramel rolos (literally to die for) with coffee. 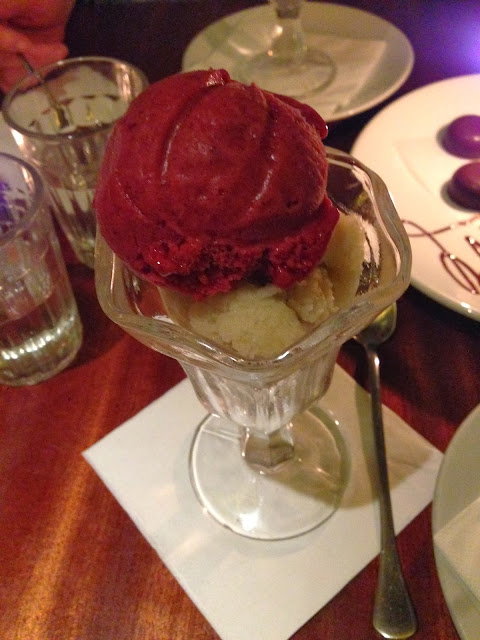 Oh, and  I nearly forgot – cocktails.  Bloody marvellous.  I often think that a huge cocktail list in a restaurant is a bad sign – it usually suggests a desire to charge a fortune for the drinks without giving much thought to them or the food.  Hawkmoor bucks that trend entirely - here the drinks are works of art in themselves and clearly as important to the folks that run the show as the food is.  Sadly, the signature Hawksmoor Fizz has vanished from the menus, but can often be made to order by the super friendly staff.  They also mix what I am certain is the best old fashioned in London – don’t just take my word for it (and have it with rye, not bourbon – trust me on that at least). 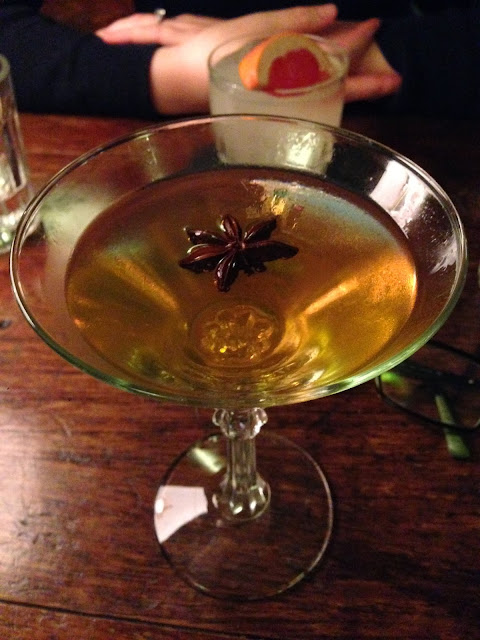 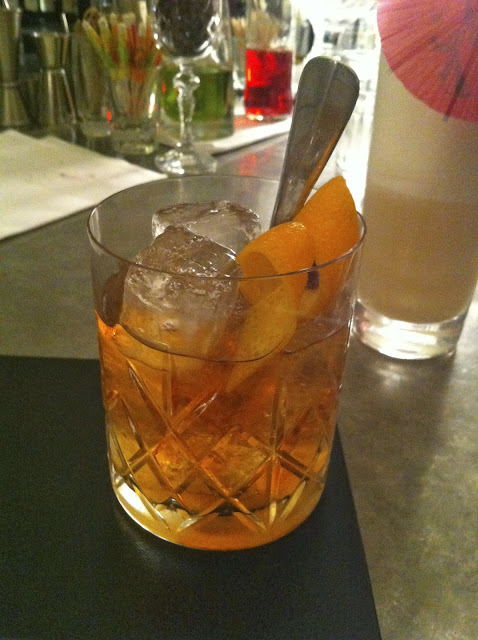 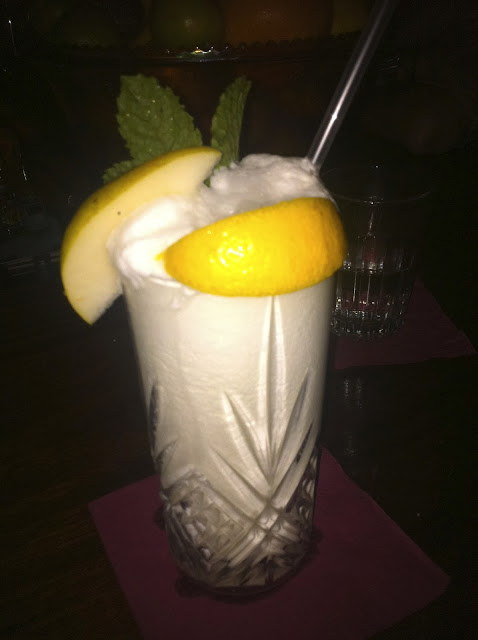 Price wise, it's spenny – almost painfully so.  But every mouthful, ever sip, was totally worth every single last penny.  If I'm going to splurge – and I am, I love food, why else would I write this blog – then I want it to be good.  And Hawksmoor is.  Bloody good.
- GrubsterBoy -
Posted by Grubster Boy at 13:06