Last weekend, over a big dinner en famille, I was (quite rightly) criticised for being a thoroughly impractical chef.  It's true, in a sense: I only tend to cook things that take flippin' ages.  My chilli con carne, for example, (one of my very, very favourite meals) takes approximately six to eight hours on a good day.  Longer if I'm being serious and cooking it overnight.  Another staple, sausage pasta sauce, takes at least a couple of hours.  All well and good – and I think that there are real, untapped flavours and textures that are lost without the joys of slow cooking – but hopeless for a quick supper on a Monday night.
Which is why I am bringing you quick chilli con carne.  It's based on my a slowly refined recipe I've developed over the years, but with a view to throwing it together when you get home from work.  And it is possible to do that with this recipe.
I tend to eat this with rice or flat bread, depending on mood and/or whether I can be bothered to boil a pan of water.  To serve: Tobasco sauce, sour cream and an avocado salsa.  Guacamole works just as well, but you always have to wait for the avocadoes to ripen (even when they're marked 'ripe and ready to eat' – the biggest lie since "the cheque's in the post") which would totally undermine the quick, unplanned idea behind this dish / post.
Ingredients:
For the chilli –
500g beef mince
1.5 medium onions
3-4 cloves of garlic
2 tsps oregano (You can buy Mexican oregano from Cool Chile which is infinitely better.  I was out, however, and the regular stuff is fine.)
1 tsp ground cumin
2 tsps smoked paprika
0.5 tsp turmeric
2 fresh red chillies
500ml tomato pasata
1-2 tsps cocoa powder
1-2 tsps soft brown sugar or molasses
Chilli pepper sauce (See my note on chilli sauces.)
2 sweet green peppers
1 can of beans (Kidney is traditional, but I prefer black eyed beans for being a touch crunchier.)
For the salsa -
2 avocados, as ripe as you can find
The other half of the onion (that you didn’t use for the chilli)
2-4 cherry tomatoes
Handful of fresh coriander
Half the juice of a lime
Chilli sauce (Green, if you can find it.)
To serve
Sour cream / crème fraiche 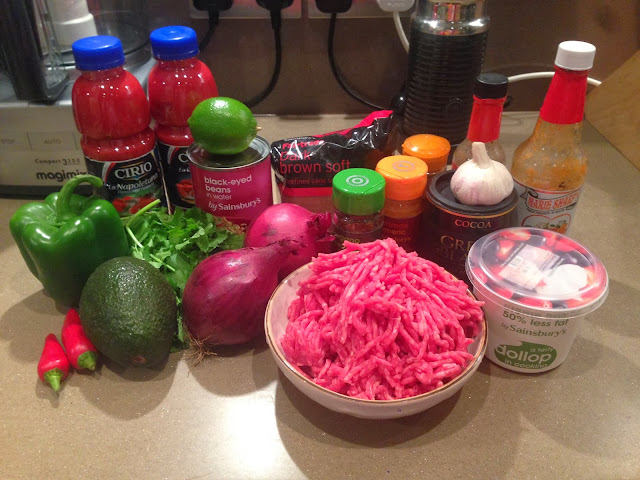 1. Start by chopping the one and a half of onions and garlic small and getting them on the heat in a little oil.  You'll want to use a big, heavy bottomed saucepan – this is a great one-pot dish, by the way, which saves a bit on cooking.  Keep the heat nice and low to soften the onions without burning the garlic.
2. Add the beef and brown it, making sure to crumble it as it goes in and break it down a little in the browning process.  You want it in crumbs.
Right now it'll look (and smell) pretty unappetising.  My friend Ben, who is domestically challenged, recently said to me: "Isn’t chilli just Bolognese with kidney beans and chilli flakes?"  No.  Silly boy.  Sure, it's mince and onions and tomato, but it’s also a whole heap more.  Basically, it starts the same – sure – but that's just the base.  To that you're adding a spice palate and developing a wholly different dish.  Ben's question is basically like looking at the ingredients for Toad in the Hole and saying: "Isn't that just a sponge cake with sausages in it?" 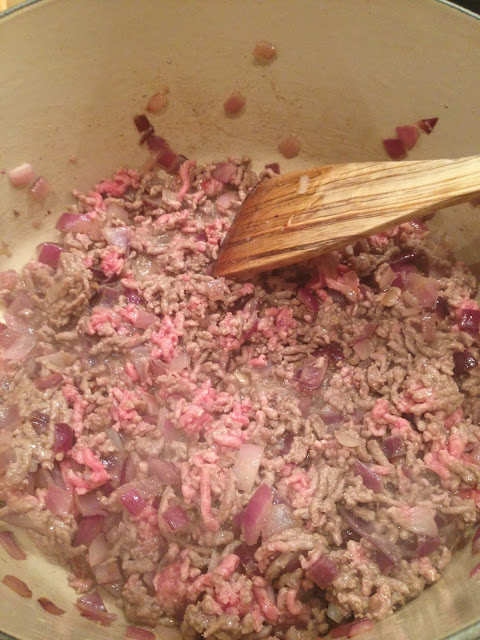 Essentially, my point is this: You're developing the base into a Mexican-y flavour adventure.  So add whatever you think appropriate.  So fear not that it doesn’t look / smell like chilli yet – it's not.  But you're about to make it chilli.
3.  Add the oregano, cumin, turmeric and paprika.  This last item got left out of the ingredients team photo by accident and so deserves its own picture.  It's absolutely the daddy and deserves respect.  It's Spanish stuff which comes in two varieties: hot and sweet.  Use hot. 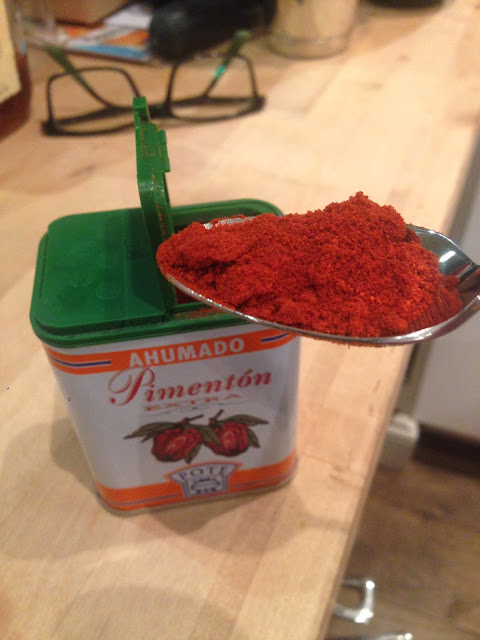 If you want it hot hot, now's the time to add 0.5 to 1 tsps crushed dried chillies, or alternatively soak and add a whole dried chilli like a chipotle.
Leave it for a bit to cook, toasting the spices nicely.  You see?  Already it's beginning to look like a chilli. 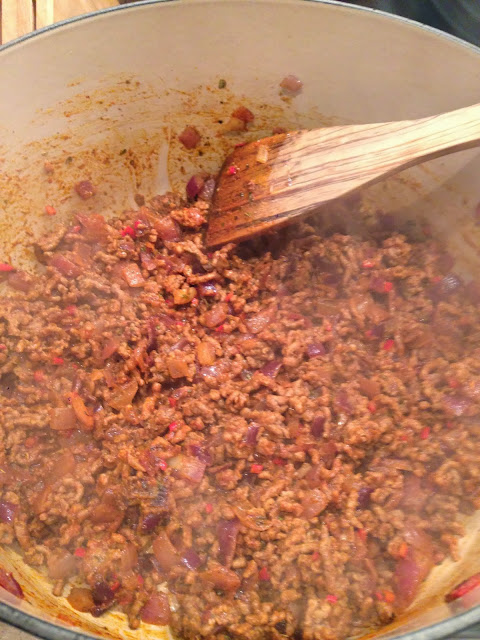 4. Add the pasata, fresh chillies, cocoa and sugar.  You can also add coffee if you like – a shot of espresso goes down well if you have a machine handy.  Another thing you can try is a cinnamon stick or two.
Add chilli sauce at this stage – the quantity will all depend on how strong the sauce you're using is, so kinda add to taste.  Do it slowly, though: it's hard to correct an overly strong chilli.  I also lobbed in a couple of teaspoons of Trees Can't Dance's amazing chipotle paste, to give it a smoky touch as well. 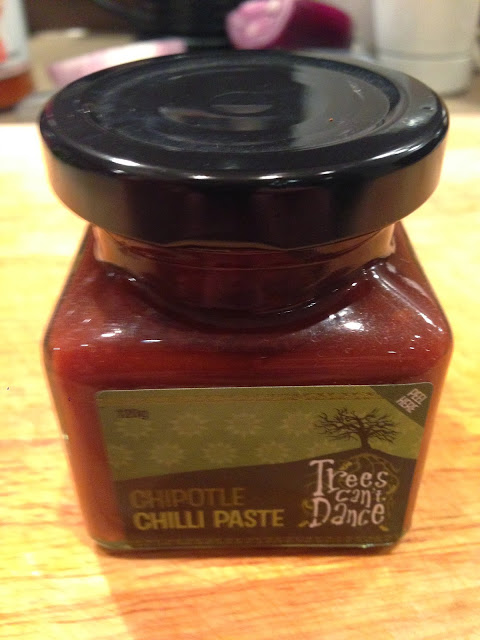 5. Bring the whole mix to a gentle simmer.  Now's the waiting time: it needs about 20 mins minimum to simmer away.  In an ideal world, this is where the slow cooking bit would come it – you'd add stock / other liquid, and leave it in a low oven overnight.  But you don’t have time for that, so get it going to let the beef soften and the flavours infuse. 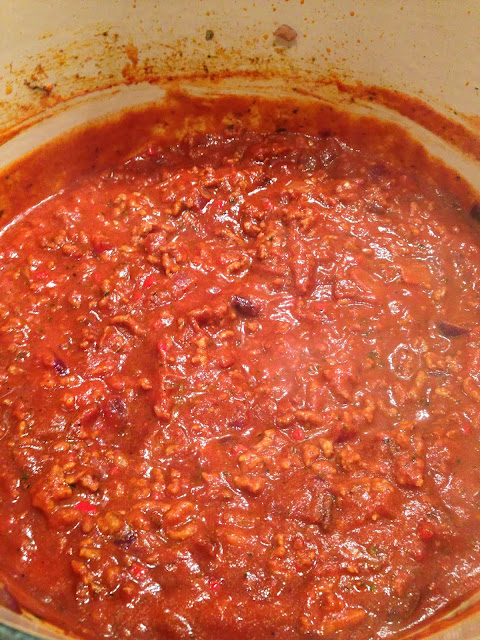 6. Whilst it's doing that, make the salsa.  Peel the avo's and chop them finely – about the same size you'd chop tomatoes for a regular salsa.  Chop the tomatoes and the onion mega finely.  Roughly chop the coriander. 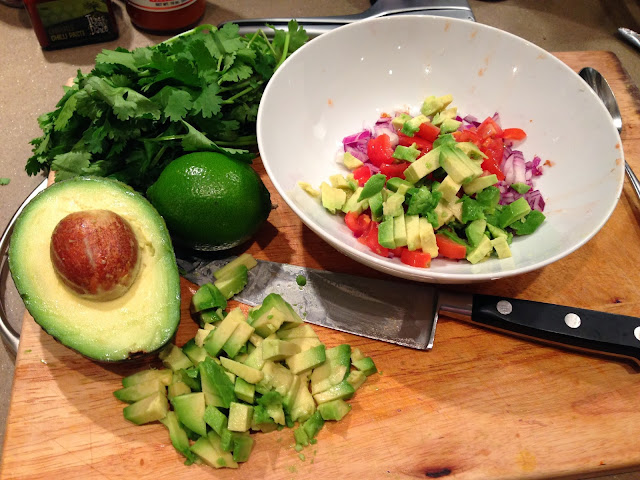 7. Put the salsa ingredients into a bowl and stir vigorously.  Season well with salt and pepper, add a
few dashes of chilli sauce and some of the lime juice.  Stir again, vigorously, and taste.  Repeat the seasoning until it tastes the way you like it.  Cover and leave in the fridge until the chilli's ready. 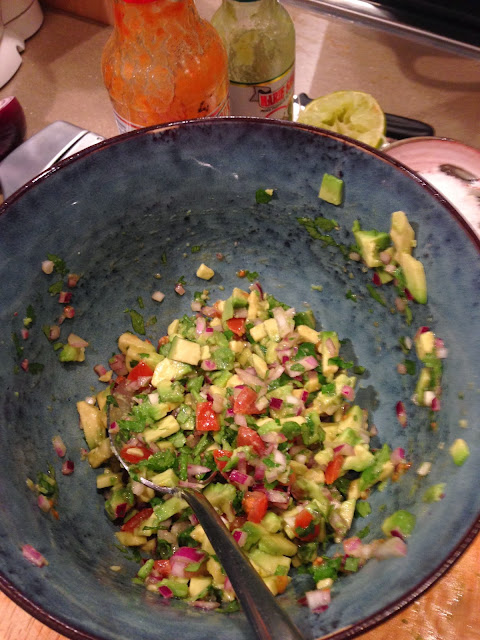 8. Returning to the chilli, after it's had about 20 mins or so, it should have reduced right down and gone an even deeper red.  You can keep it going like this as long as you like, just be sure to top up with water / beef or vegetable stock from time-to-time, to stop it becoming too thick. 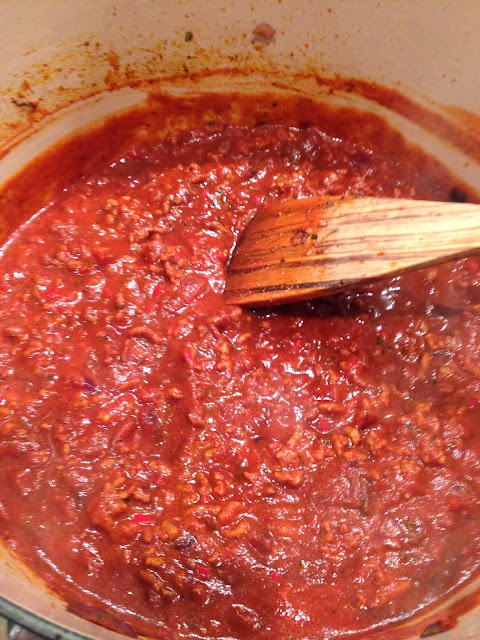 9. Chop the green peppers into chunks – about 1cm squared.  Open the beans and rinse under the cold tap.  Throw both into the pot and give them 10 mins, really just to heat up.  If you're doing rice, you probably want it to go in the pan now. 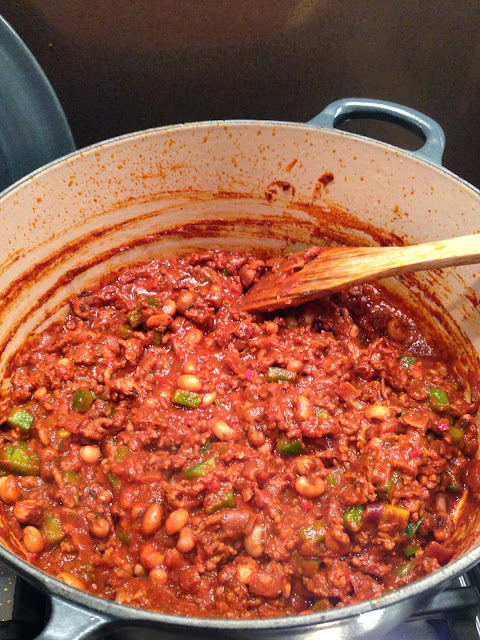 Once the peppers and beans have had their time, you're done and ready to serve.  Basically, it's just a trick of sticking everything in a bowl and handing out forks.  Also serve with chilli sauce on the side – different people like things at different strengths, so I always aim (with varying degrees of success) to produce a relatively mild chilli then let people spice it up with sauces of different flavours. 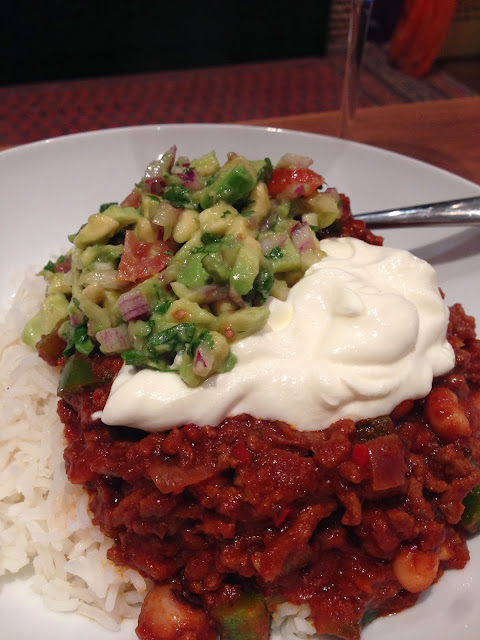 And to drink?  Don’t be silly, there's really only two options: Mexican beer (Corona, Pacifico or Modelo, perhaps?) with a wedge of lime in it, or a big, strong, salty margarita.
- GrubsterBoy -
Posted by Grubster Boy at 16:12