Toad in the Hole

Jeez, it's gotten cold all of a sudden.  In fact, there's something distinctly autumnal in the air.  Time for comfort food.
One of my all-time favourite comfort foods has got to be toad in the hole.  Sure, a decent steak pie (of which I am quite the connoisseur, I'll have you know) hits the spot every time.  But a good old toad is just somehow the pinnacle.  It's probably because it's so terribly, terribly bad for you, I expect – being, as it is, basically a massive Yorkshire pud full of fatty pork.  Still, served up with lashings of gravy, it's just too good to miss.
I make mine with caramelised, sticky onions in, as I think it lifts the dish somehow (and I have a very, very sweet tooth.  Try it.  Others mix in all sorts, whether it be sage or mustard seeds.  It's completely your thing to try, so let your imagination run away with you.
Ingredients:
This is the worst ingredients picture ever, because it basically is missing half the ingredients.  Like the beer.  And the milk.  And all the stuff I made the fake gravy out of.  Oh well. 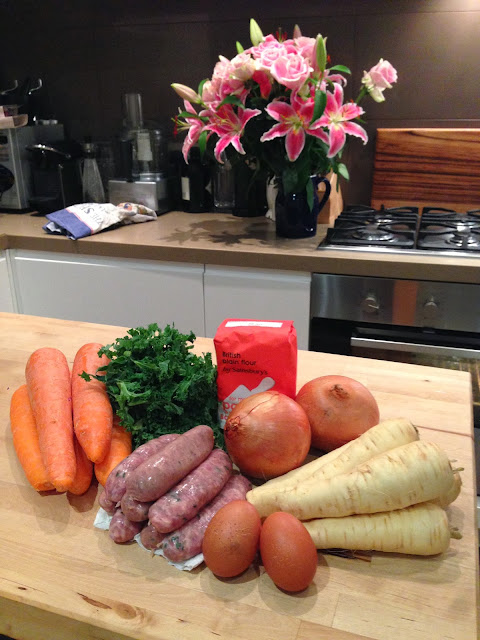 Toad:
x8 good quality bangers
(I used a four each of herb and Cumberland, to make it more interesting, but it's really whatever you want.)
Hole:

(Whatever you like, really – let's not be prescriptive.  I went for autumnal veg, coz I'm basically feeling autumnal.)

Curly Kale
Parsnips
Carrots
1. Get the veg on.  This'll take way longer than you think it will.  I had about five each of the parsnips and the carrots – one each, plus one for luck.  Chopped into big-ish batons, covered in olive oil, liberally seasoned with salt & pepper and sprinkled with thyme (I had some leftover in the fridge).  Oh, and I threw a few cloves of garlic crushed with the back of a big knife in there too, for good measure.  Roast them in the oven at 180°C for 45 mins (give or take – so keep an eye on them), tossing them every so often.
They go in like this... 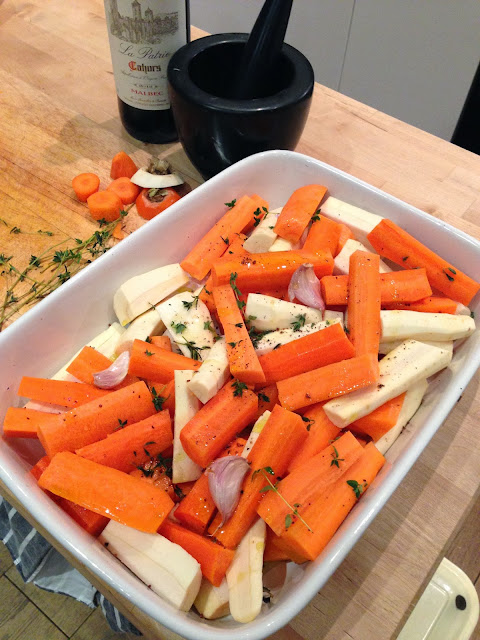 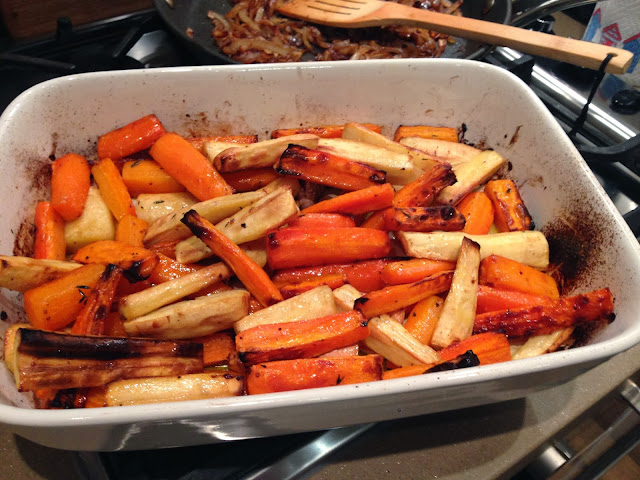 As for the kale, you can steam that in the last 5 minutes of cooking the toad.
2. Brown your bangers in a frying pan.  Don’t worry, you're not creating more washing up because we're going to fry other stuff in this pan too. 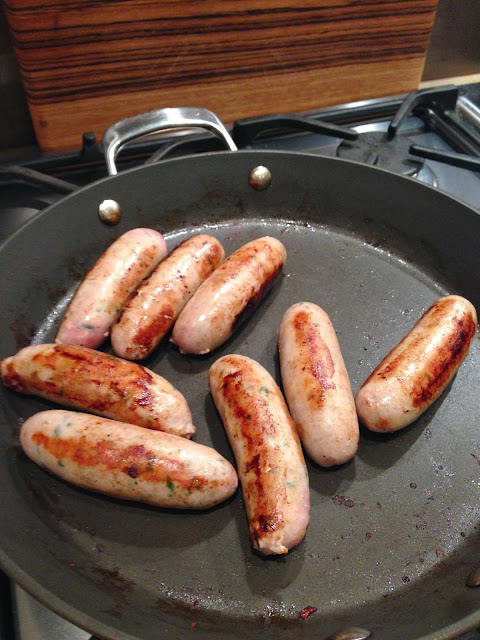 Once browned (don’t worry, they don’t need to be cooked) remove and set to one side.
3. Slice the onions into thin strips, about half a centimetre wide.  Get 'em in the pan.  Keep the heat medium – you're trying to soften and caramelise them, not make crispy onions.  This isn’t a burger.  Also, don’t worry if they don’t really fit in the pan, they'll shrink.

Just keep stirring them every so often, and watch for crispiness.  Bad crispiness.
4. Meanwhile, make the batter.  Crack the eggs into a big bowl and whisk with an electric hand whisk.  Then add the milk and flour alternately – I have some nifty shot measurements, so did 25 ml milk followed by a tablespoon of flour, etc.  Keep whisking throughout if possible – fortunately I had a GrubsterGirl on hand to help me. 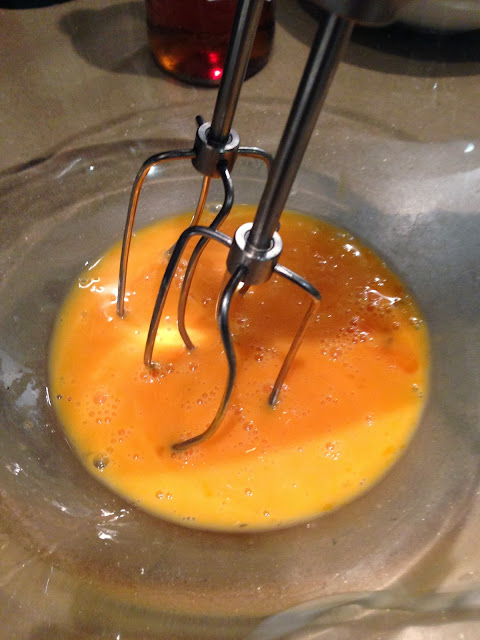 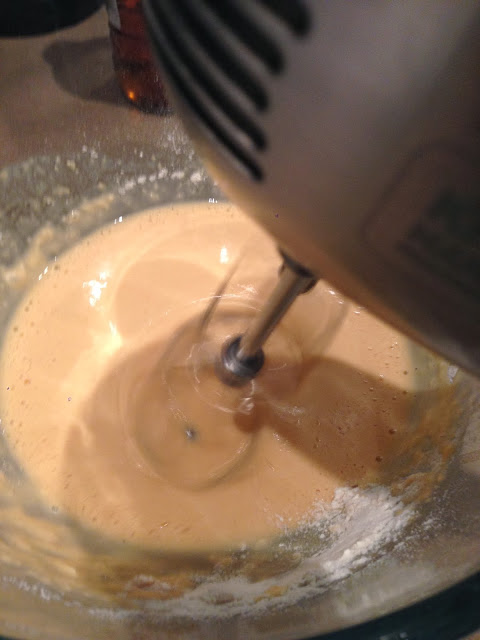 When you've got through it all you should have a trick, stodgy batter.  Fear not.  Add your beer now, again, bit by bit by bit, folding it into the batter.  You don’t want to lose the fizz. 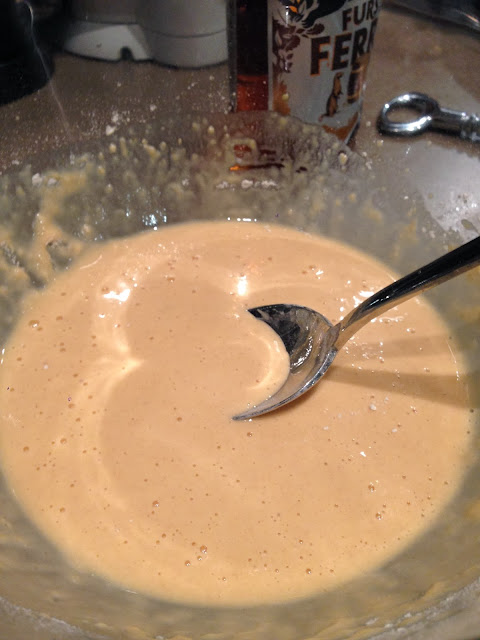 By the way, I used Fursty Ferret from Badger Beers (the naughty brewery who, hilariously, apparently move goalposts).  Now, a batter is much too good a use for this fantastic ale, but fortunately you'll be left with tonnes of it, and it washes down a toad in the hole beautifully. 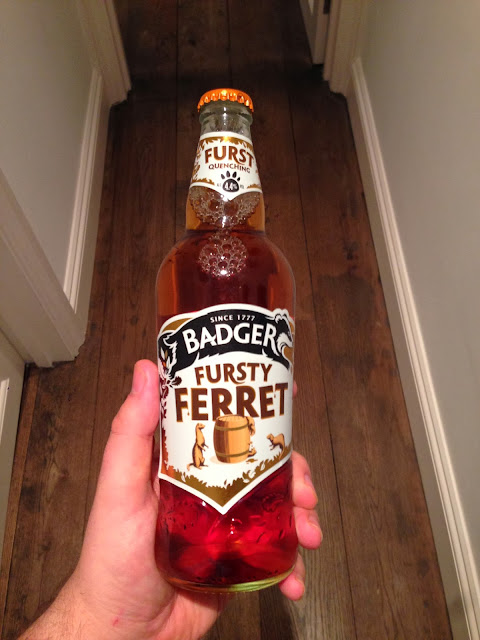 5. Once the batter is done, it needs to sit for 15 minutes.  This is the perfect time to get the roasting tin warned in the oven at 220°C.  Glug in a good 3-4 tablespoons of oil – I usually use sunflower, but apparently dripping works well.  I just think that GG will dump me if I start cooking with dripping.  By the way, always use a roasting tin – it gets much hotter than a ceramic dish, so the Yorkshire ends up rising higher and being crispier.  A friend uses a huge cast iron dish for this, which she says works a treat – I've tried it, and can confirm, but it obviously takes a lot longer to get really hot, which is what you want it to be when the batter goes in.
Give it 5-10 minutes to make sure it gets really hot, then add the sausages for a few minutes.
Just a safety note here: hot fat is hot.  I mean really bloody hot.  So be careful: it will spit when anything is added to it.
6. By now your onions should be done perfectly, but if they got done sooner bring them back up to temperature.  Once hot, sprinkle the sugar over them and give them a good stir, so that the sugar melts and the onions end up coated in oniony caramel.  Resist the urge to eat it all now, this stuff tastes bloody amazing.
7. Get the roasting tin out.  The fat should be smoking (literally) hot.  Carefully add the onions, so that they are spread all over the sausages and the tin, like this: 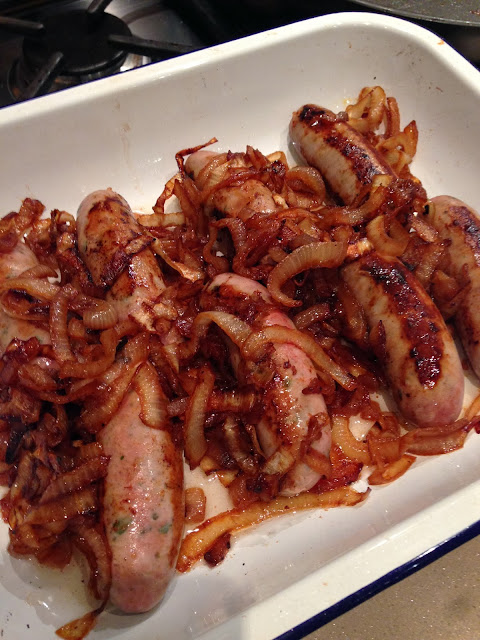 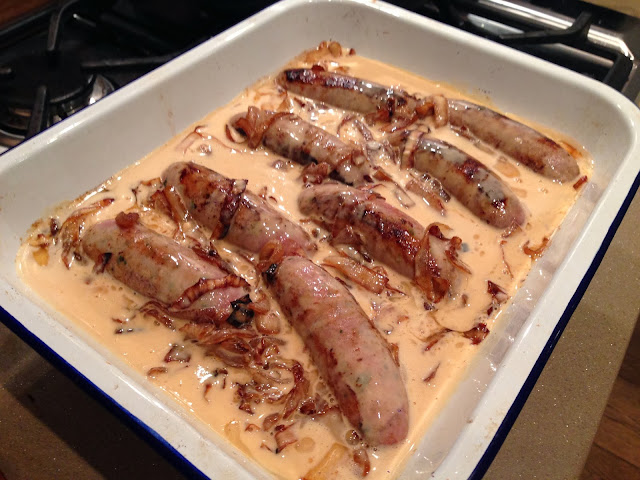 Push any onions off so they're not sticking out of the batter too much, otherwise they'll burn.  Now, get the damn thing in the oven, PDQ.
Oh, a word on timing.  This was based on a recipe that said 35 minutes, which was a lie.  I could have had this out at 25 mins and probably had it better.  So it ended up a little sunburnt.  Which I'm pretty damn cross about.  Tasted good, though. 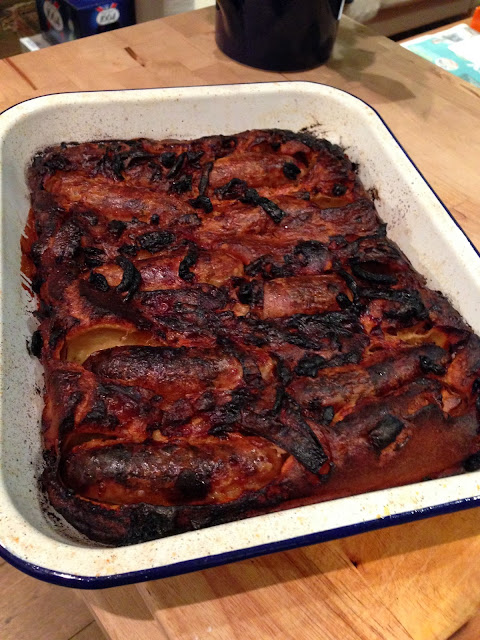 Serve the whole thing up – root veg, steamed kale, toad in the hole.  Cover it with gravy – make your own, buy some in, whatever.  I used a Knorr Stockpot cheat, which was actually very impressive.  I split the water used to dissolve the little fella 50/50 with red wine, which was a real plus. 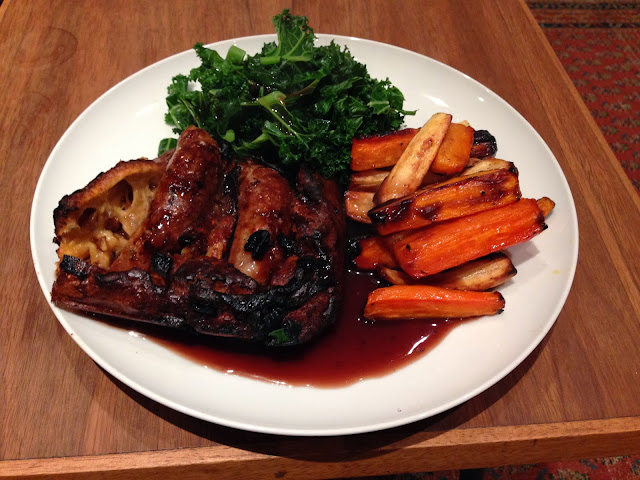 Email ThisBlogThis!Share to TwitterShare to FacebookShare to Pinterest
Labels: Autumn, Recipes, Sausages, Toad in the Hole