Katz's Deli is famous.  Infamous, even. 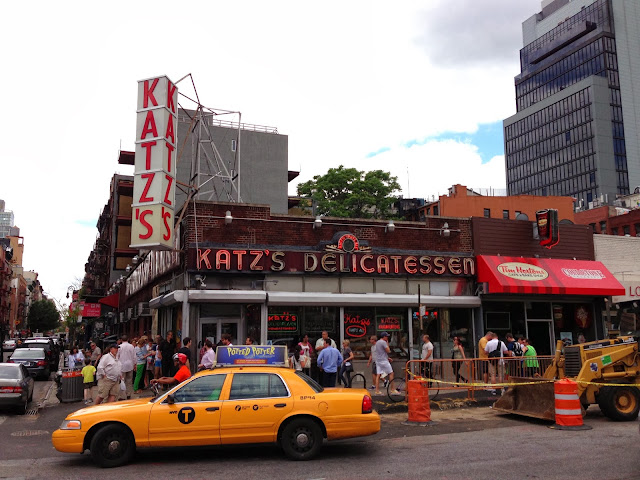 But lots of people (at least here in Blighty) don’t seem to know it.  So, let me put it this way: If you've seen When Harry Met Sally, and can remember that scene, well, that's Katz's Deli. 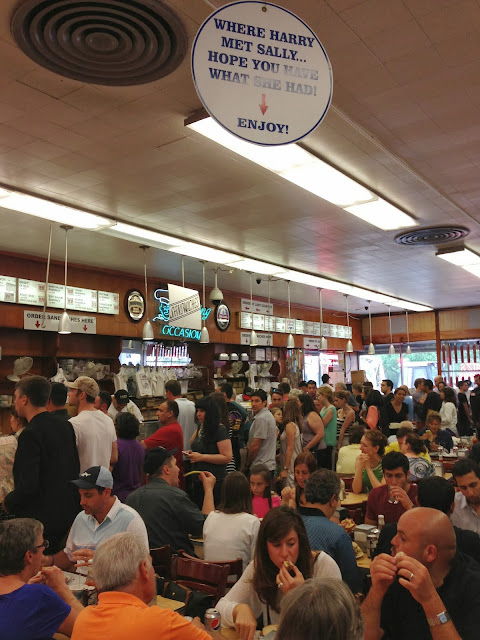 Got it now?  Thought so.

For all the English folk who have looked at me with a puzzled expression when I say I can’t wait to go to Katz's, there must be a dozen New Yorkers already on the Subway on their way to chow down.  Katz's defines busy – defines an 'every man to himself' attitude to dining, whether it's forcing your way through the queues or battling random strangers for the last table. 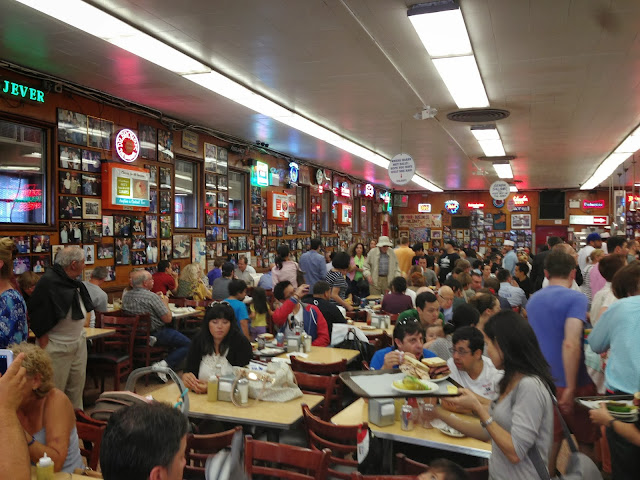 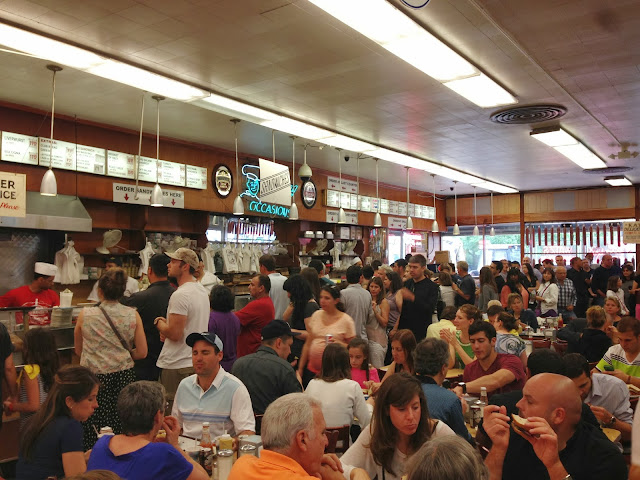 There's something brutally authentic about Katz's.  It's run down, it's basic, it still runs its fantastic 'send a salami to your boy in the army' military shipping campaign.  The walls are peppered with photos of celebs - local and international - with their arms around Mr Katz himself.  It's grubby, fat-filled food, and yet it feels somehow wholesome.   Basically, it's a classic New York deli, serving up wholly uncompromising plates of towering sandwiches, stuffed to the absolute gunnels with meat. 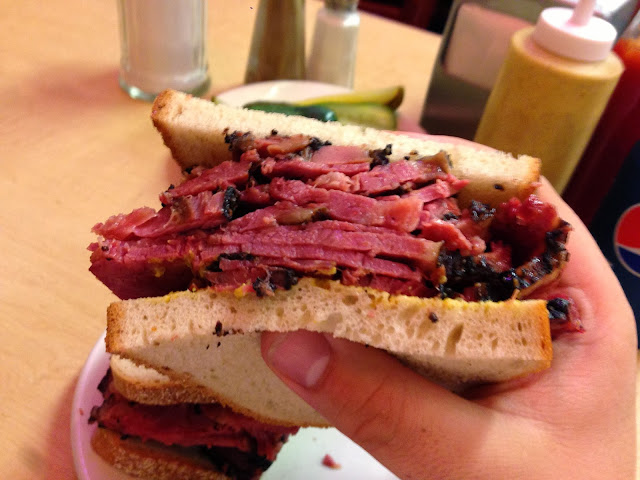 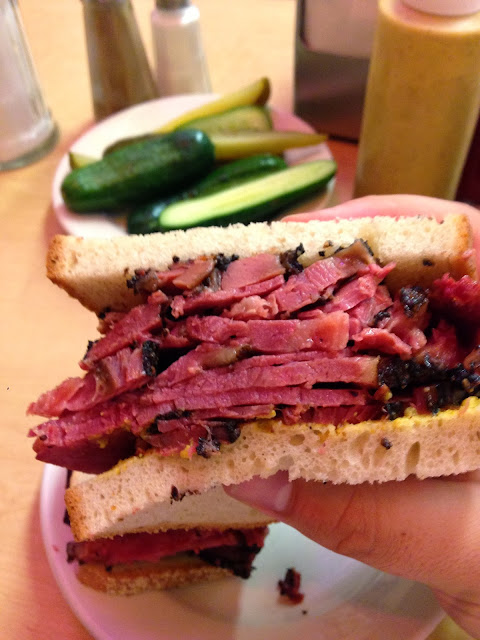 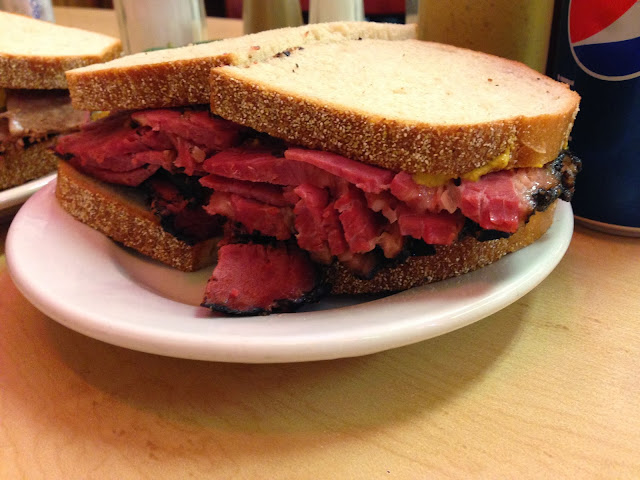 Sure, there are other things on the menu.  But frankly I wasn't interested.  I strode up to the counter and ordered.  No, that's a lie, I waited patiently (like a good Englishman) in an enormous queue whilst everyone else around me barged and squirmed past to make sure that they ordered first (like good New Yorkers).

Pretty soon though I managed to get served.  And boy what a sight it was to behold.  In fact, I was so dumbstruck by the complete carnage – the crowds, the bustle, the shouted orders, the servers hacking away at slabs of beef like they might run off and escape – that I singularly failed to fully document the spectacle.  Sorry folks, this is as good as you get. My server was a delight, however, exhibiting classic New York charm.  Brief and to the point, he presented me with a stacked side plate, almost as big as many a Londoner's lunch, of different cuts to try.

I settled for pastrami on rye with mustard, however, the classic choice.  And by settled, I really mean 'I lucked out'.   Because this was something incredible.  Seriously, mind-blowingly incredible.  GrubsterGirl went for sliced brisket on rye (on the left).  Equally amazeballs. 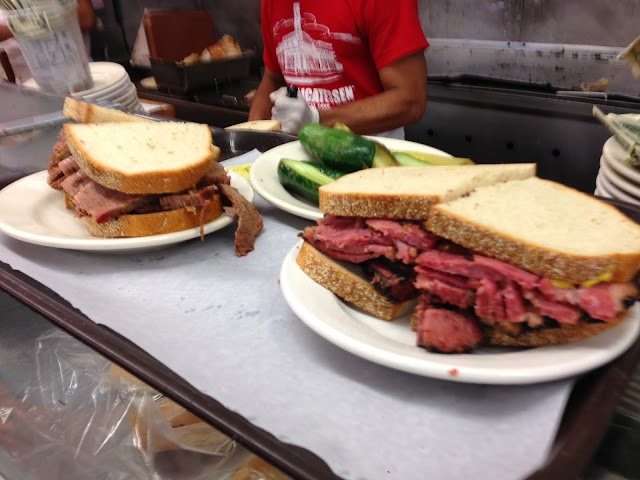 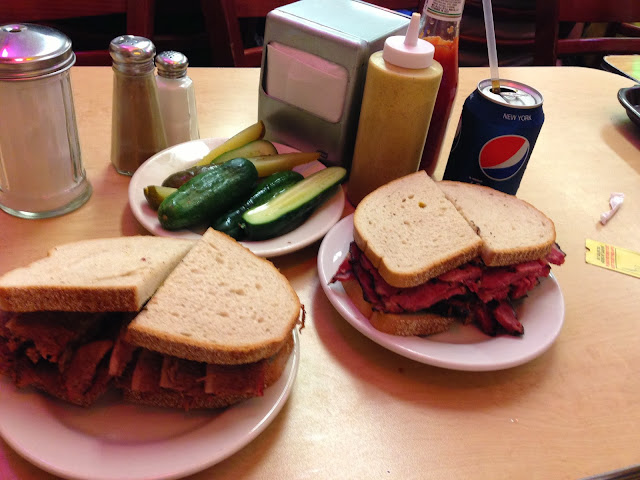 And all of it served up with not one, but two different kind of pickles.  I mean, how lucky can one guy be? 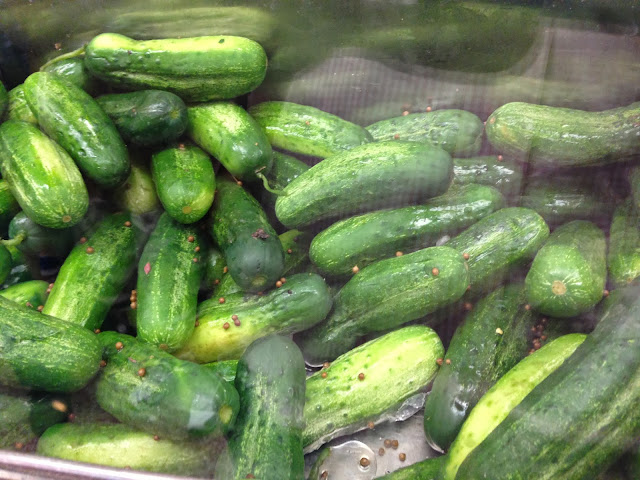 NYC has long been associated with such delights as pastrami, salt beef, broiled brisket – basically, all the various ways of tenderising and curing the toughest (but easily the most flavourful) cuts of cow.  And if Nuu Yoik is the promised land of such delights, then Katz's must be the ultimate shrine. 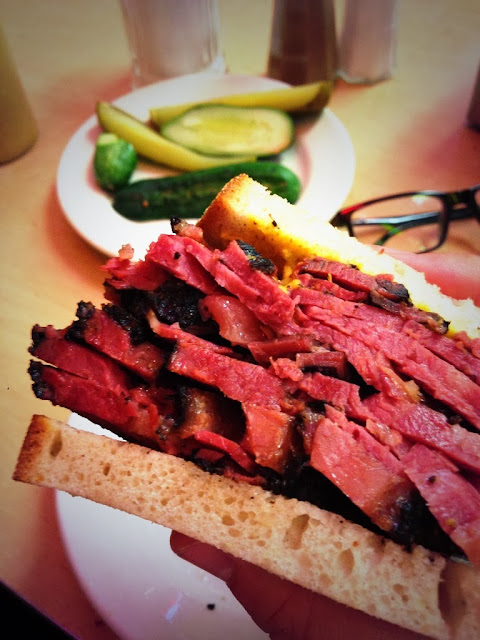