Jambalaya is one of those funny dishes that lots of folk in the UK have heard of and very few are confident that they could adequately put into words.  If you think about it, cooking up rice with various kinds of meat, fish and vegetables could run a gamut of options: paella, risotto, pilaf, biryani, kedgeree to name just a few.  It's one of the elephants of modern cooking: I may not be able to describe it, but I'm damn sure I know it when I see it.

This isn't helped by jambalaya being a dish that I can’t say I'm totally familiar with.  My experience of eating jambalaya is, in fact, limited to one occasion: Coop's Place in New Orleans.  The memory still lingers, of a night out being stuffed with a rich and smokey mash-up of rice, smoked sausage, ham and rabbit, washed down with local raspberry Abita Ale.  One of the best meals of my life and a culinary highlight from a long roadtrip with plenty of culinary highlights.  All this was then followed by whiling away the night to the wee small hours in the crowded but intimate Spotted Cat Café, jiving to the tunes of the Jumbo Shrimp Jazz Band.  What a night.

So I confess that I'm coming to this latest experiment a little nervous.  The bar has, after all, been set a touch high...  Still, here we go. 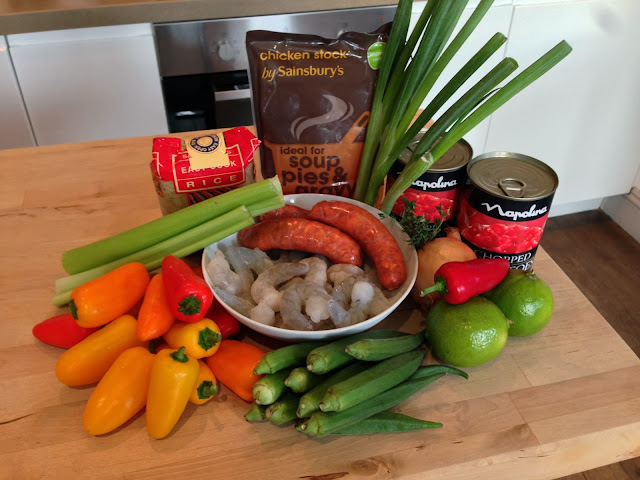 x1 large yellow onion
x1 large red fresh chili
x3 sticks of celery
100g okra (I know, I know, this isn’t gumbo so okra doesn’t belong here.  But I bloody love it, so you're all gonna have to learn to live with it...)
x3 sweet peppers (I actually used a couple of packets of Sainsbury's baby sweet peppers, which I think taste flippin' fantastic.)
A few sprigs of thyme
x3 cloves of garlic

1. Chop all the veg up.  Dice the onion into medium size chunks, slice the fresh celery diagonally relatively thinly, chop the chili finely, chop the okra lengthways.  The baby peppers I used are great and are rather aesthetically pleasing if you carefully hollow them out then cut them into rings.  But who has the time for that crap most days? 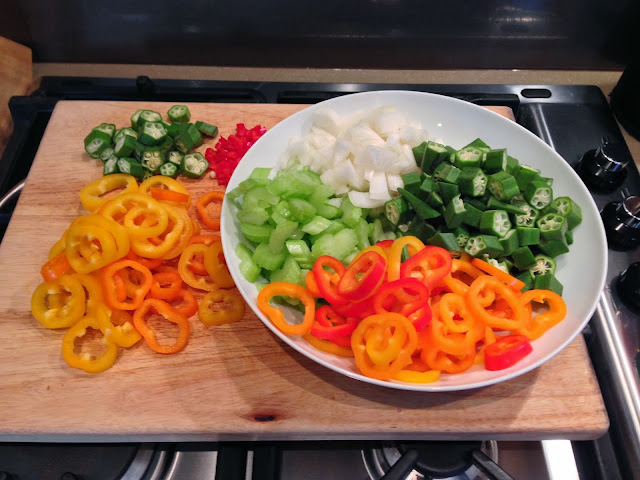 2. Meanwhile, get them sausages in the pan.  Give them a prick and cook for 10 minutes or so with a smidgen of olive oil in the pan that you intend to do all the cooking in. 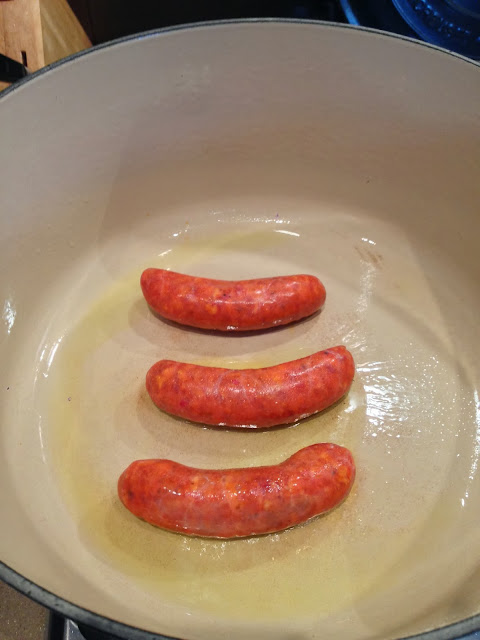 (Yes, I know there are only three and I said four.  Three wasn't enough, right?  So, basically, you're getting the advantage of my screw-up.  So be grateful, OK?)

You want to cook them until they are not just about cooked, then remove them.  I have my reasons for avoiding overcooking them.  You're just trying to achieve two ends with this stage: Firming up the meat so that they can be skinned and sliced, yet stay whole when they go back in the pot for further cooking.  Secondly, you want to get the oil out so you can cook everything else in it. 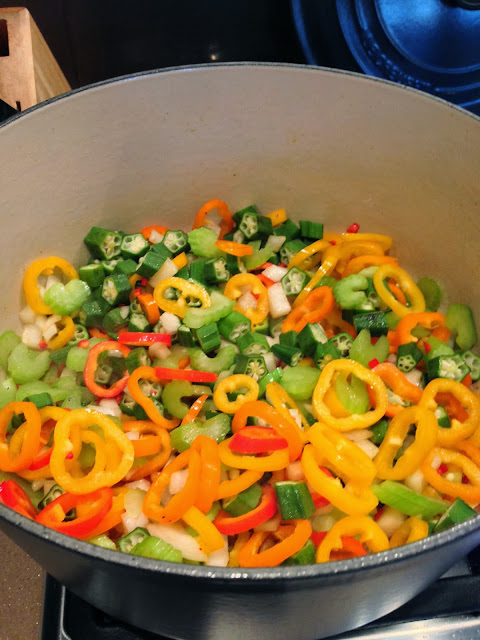 4. Add the rice and the leaves from the thyme sprigs, and stir into the vegetables.  Cook for a couple of minutes on a high-ish heat, stirring the rice to coat it in all the oil left from the sausages.  A bit like you would a risotto. 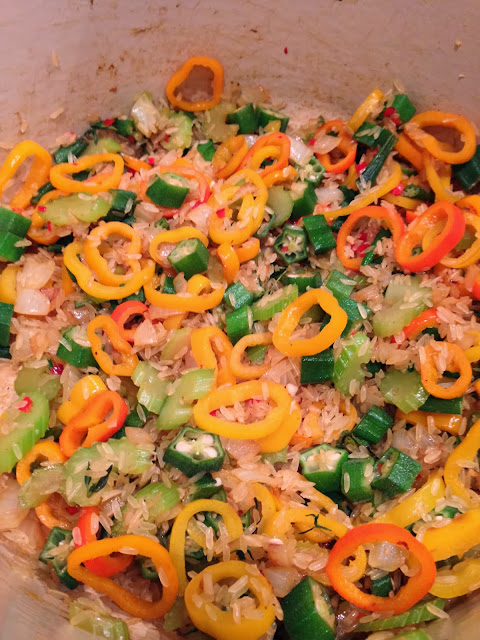 5. Add the stock, tinned tomatoes and a bloody good few shakes of Tobasco.  This fiery little number comes from Avery Island in Louisiana, so is the perfect accompaniment to any Southern American Creole dish, in my view. 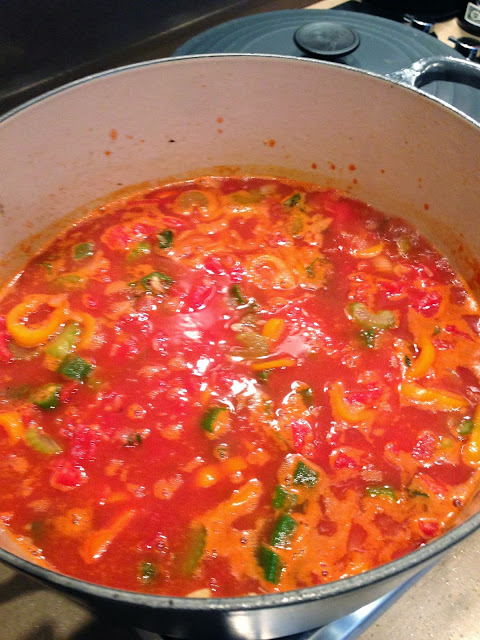 Turn the heat down and get the dish to a gentle simmer, then cover and set the timer for 12 minutes.  But be sure to give it a stir every so often, though, or it'll stick.

6. Whilst all this is going on, your sausages should have cooled.  Very carefully skin them - the meat will be soft and will want to break up quite a lot.  Don't let that happen, if at all possible.  Once skinned, cut them into discs (again, very carefully - be sure to slice them back and forth, not just try to guillotine them - that won't work out well for you. 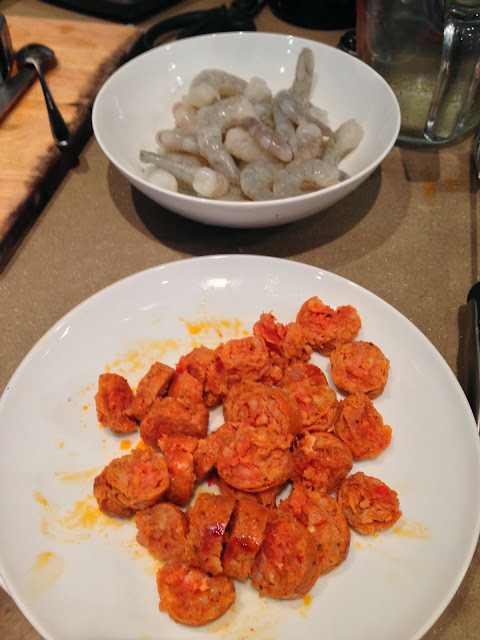 7. Get the lid off and have a good look.  I found that most of the liquid had gone, but not all, and the rice was cooked.  This isn’t ideal; jambalaya's not a soup.  If you have the same issue, whack the heat up to full and cook quickly for a few minutes – you'll find most of the wet cooks off without splitting the rice. 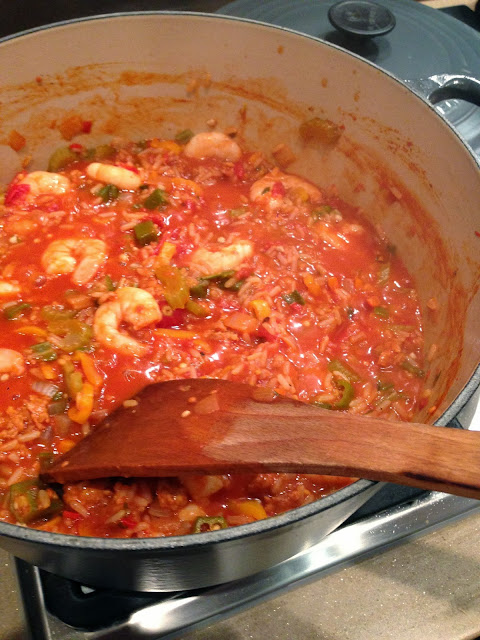 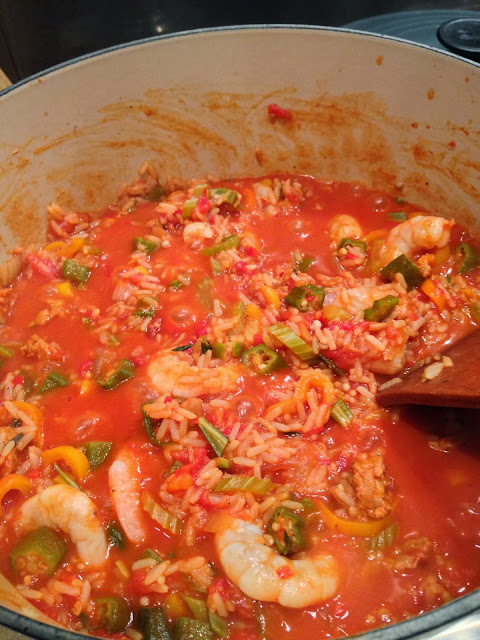 8. When all is done, serve straight up, piping hot, with spring onion sprinkled on top and lime squeezed all over the shop.  Add more Tobasco too (unless you’re a wimp). 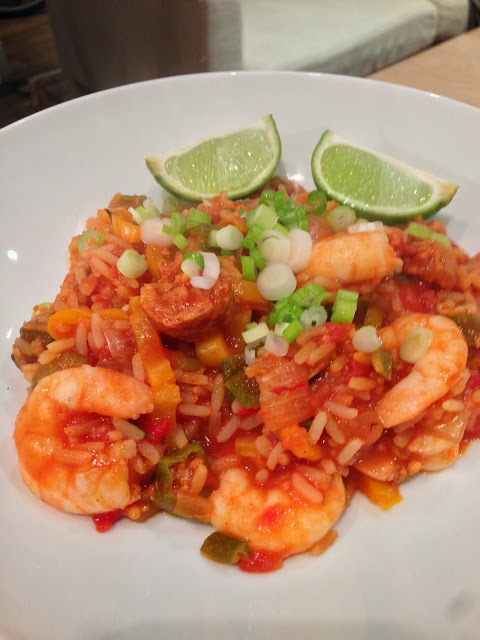 It's a wonderful, warming, comforting dish.  I feel like I ought to be eating it only during the summer, only on particularly muggy, humid, sticky, hot summer days – basically, on days approaching Louisiana's climate.  But the truth is that it’s brilliant in winter too, and as we head into autumn there's a lot worse one could do than scoop down prodigious great quantities of this mish-mash of Creole flavours.