Craft beer and BBQ, along with quality burgers and kimchi, are perhaps two of the four horsemen of the overdone foodpocalypse currently engulfing London.  Don’t get me wrong, there’s a reason these things are so successful – they’re bloody lovely and everyone wants a mouthful.  But they are everywhere and in some cases that begins to grate, at times.  So when an email chain alerts me to the fact that there is an afternoon craft beer and BBQ-ing going down in Southwark, the initial reaction, if we’re honest, is “Again?”.

Of course, that doesn’t stop me reaching for my wallet, clicking the link and booking my tickets.  Why?  Two reasons:  First, the pedigree here is pretty impressive – this is a partnership of Brew By Numbers (or “BBNo” as the branding has it), one of London’s more successful outlets of small batch, craft brewed beer, and Howard’s Meat Co., a British BBQ vendor with Austin, TX training smoking meat in London.  Second, as I said above, beer and BBQ are pretty bloody lovely and so there’s no way I’m gonna turn this sort of opportunity down.

There’s something almost painfully hipster about the setting.  BBNo’s brewhouse is squeezed into a Bermondsey railway arch, mere spitting distance from Maltby Street Market.  It’s the kind of place you expect to find a lot of beards, thick-rimmed glasses and ironic cartoon t-shirts, and it didn’t disappoint.  They had four beers on tap, each were distinctly delicious, from seasonal brews to their standard IPA. 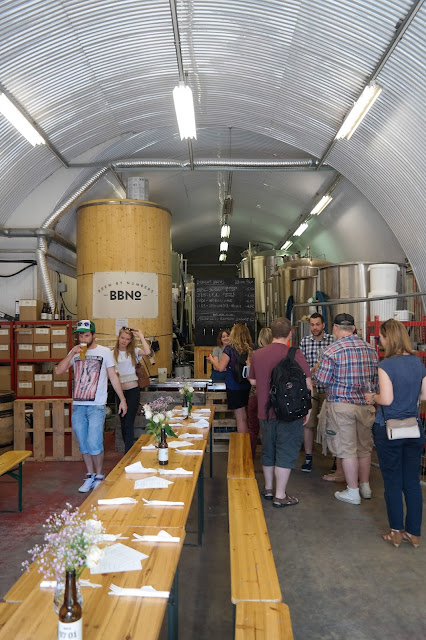 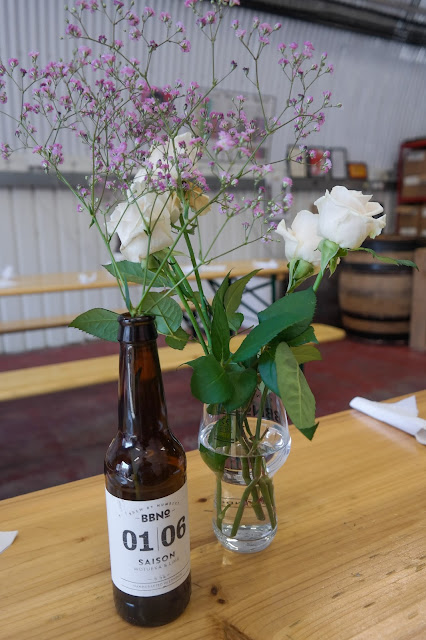 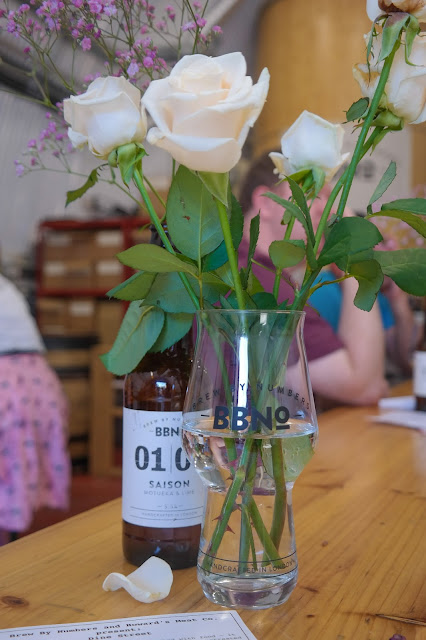 We kicked off with a witbeer, a classic white beer made with orange peel, coriander and chamomile flowers. 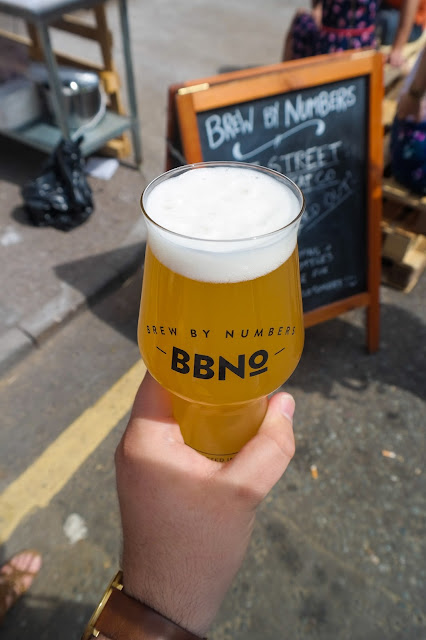 On a hot sunny day, as Sunday was, it was perfect refreshment.  In fact, this was a truly brilliant beer.  Much like the Einstok I was raving about when we ate in an Underground train, this is a fantastic way of brewing, and makes a beer that even a non-beer drinker (such as GrubsterGirl) would enjoy.

Pretty soon, we were being treated to some canapé things.  I say ‘canapé things’ because I don’t really know how else to put it.  I mean, sure, it’s sort of like a canapé in that it’s (a) small, virtually bitesized; (b) served before the meal; and (c) on a cocktail stick.  But surely this is no fancy canapé?  Canapés to me seem to belong at awkward networking events and dreary office parties. 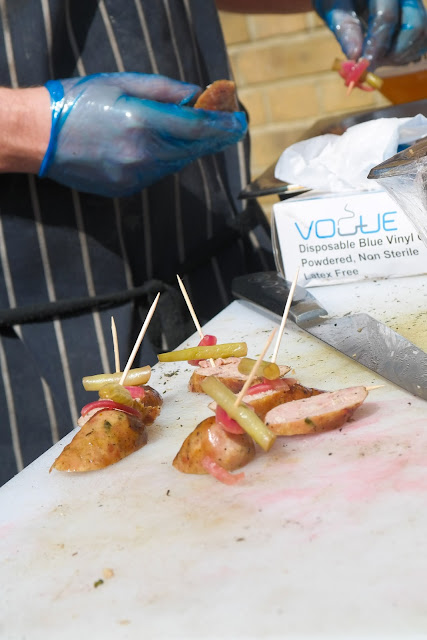 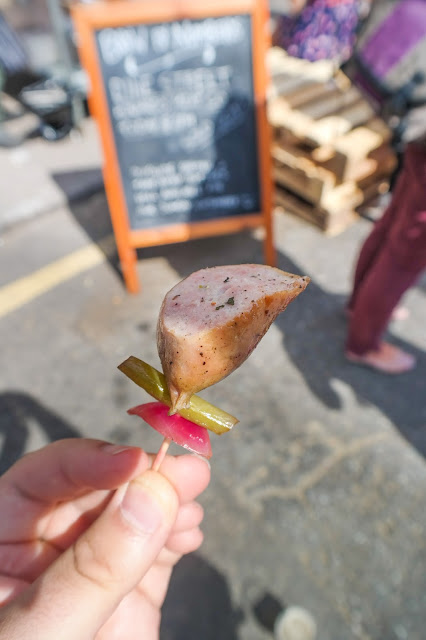 But who cares, eh?  Because these were brilliant.  I mean, seriously brilliant.  One of the best sausages I’ve ever had, it was rich, smokey and oh-so-juicy – all of the things I have come to expect not to have in the often over-grilled British Barbequed Banger.  Technically this was a weisswurst, a white sausage made from veal and back bacon – I assume it was the long, long hours of smoking that had tuned its final colour.  The pickles it was served with – pink onions and pickled green beans – were fantastic too.

By this stage we’re on to beer number two – the saison. 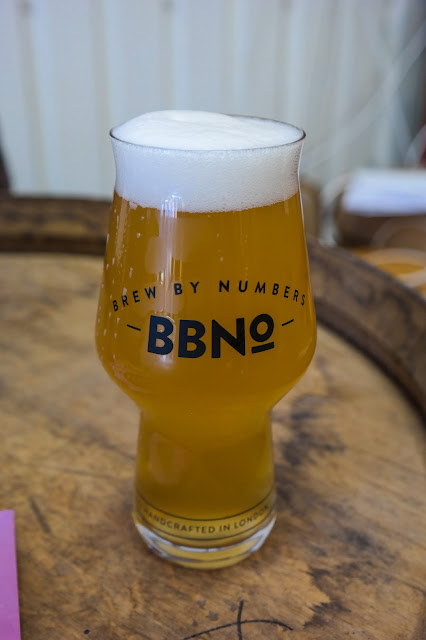 ‘Saison’ is the French word for season, or seasonal (in this instance).  A Belgian style of beer, this one is made with lime zest and particularly fruity hops, and is a real zinger.  Should be good with rich greasy food.  Like BBQ.  Oh what a coincidence.

By now we’re seated in side, at long trestle tables.  There’s something of a seating plan but it’s pretty much easy come easy go, which is nice and relaxed.  Also, they’ve not made the mistake of overcrowding the tables, so it’s comfortable which is a blessed relief and a big change from the norm.  It kinda feels like you can make as many friends from your neighbours as you like or ignore them altogether, whatever is your fancy.  In fact, generally, the vibe is wonderfully relaxed.  There’s no hassle to get in and get out for the next cover, this is take-your-time style eating, laid-back gluttony.  Perfect.

Soon the food starts trotting out.  Let’s get started with the sides because, you know, I like to leave the best ‘til last.

So, we have fresh seasonal fruit slaw and jalapeño potato salad. 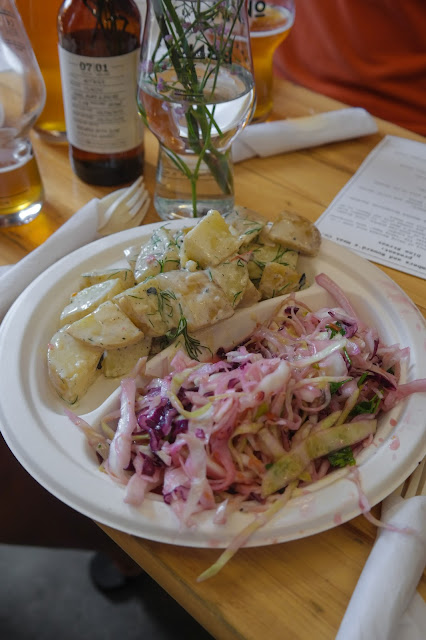 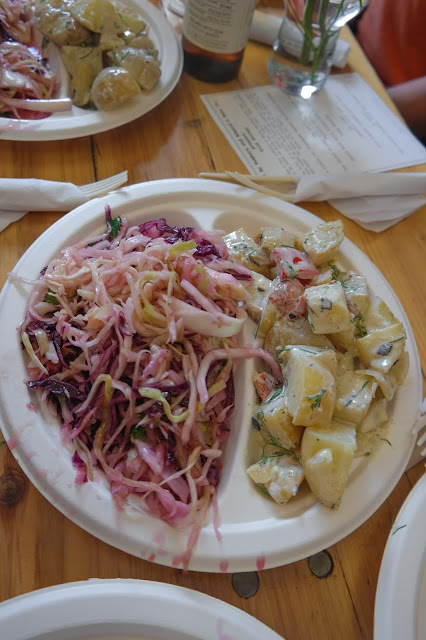 OK, so with the slaw I am not sure where the fruit is.  And I don’t like potato salad (actually, there’s a confession about potatoes somewhere on this blog…).  But, if I’m honest, neither really matter because these two sides are rocking.  Seriously, nailed it.  The slaw is crunchy and tasty, without going the way of so many others and being too cloying.  Same goes for the potato salad, which can be a slick of mayo-based sludge populated by the occasional over-boiled spud.  Not so here: It’s delicious, with a smack of dill and punch of jalapeño, this is wonderfully more-ish and leaves a professed potato-dodger coming back for more and more and more.

I also ordered up a schooner of BBNo’s Session IPA. 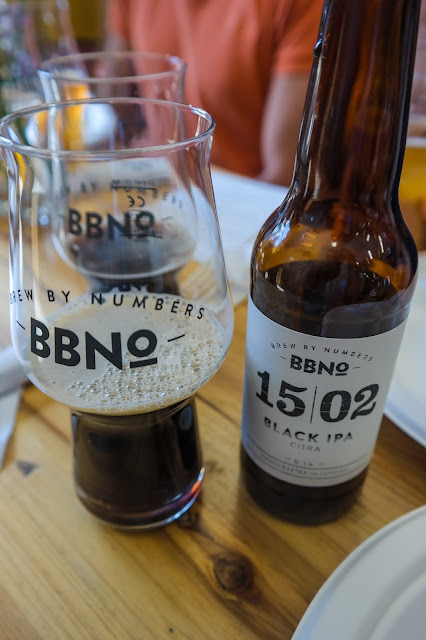 This was similarly delicious.  As any ‘session’ beer ought to be, it was thoroughly drinkable and very tasty.  Another good drop with food. Actually, I should mention at this stage that these aren’t pints, they’re 2/3rd pint glasses, which makes them more manageable and means you can drink a wider variety of beers.  Which has to be a good thing, right?

Now let’s get serious and talk about the meat.  Because, let’s be honest, that’s why you’re still reading this. 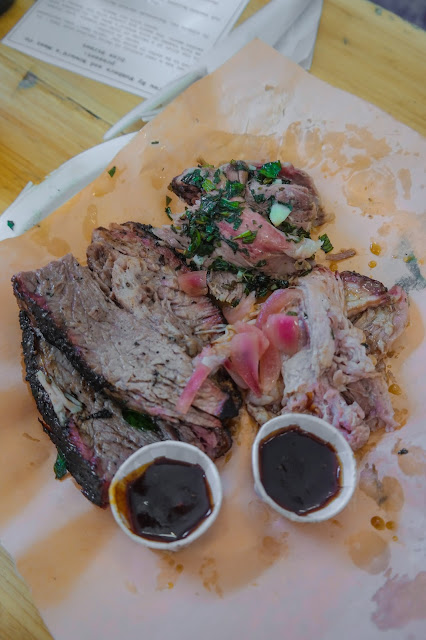 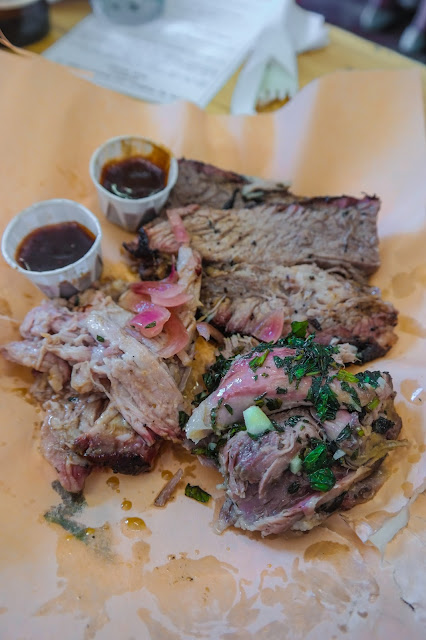 Meat comes on a platter, three different types: pork belly (marinated in the Session IPA), lamb shoulder, and beef brisket.  On the side is a little pot of their own BBQ sauce, made today with a BBNo porter.

Let’s start with the pork. 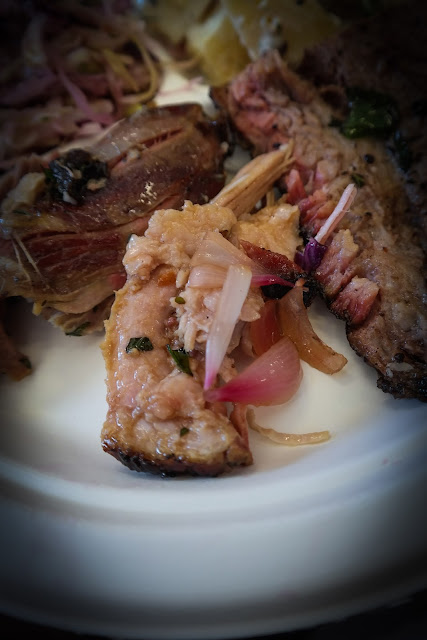 This was beautiful – rich, buttery fat had slowly rendered into the meat leaving smoky, soft belly pork that melted in the mouth.  Devine, but sadly too little of it.

The smokiness of all of the meats was something else, something I have not properly had in the UK before, proper Texan.  The meats are smoked for up to 16 hours (!) over a mix of lime, silver birch and English red oak.  The quality of the cooking process really shows – there are no cheats here, no corners cut.

Then there was the lamb. 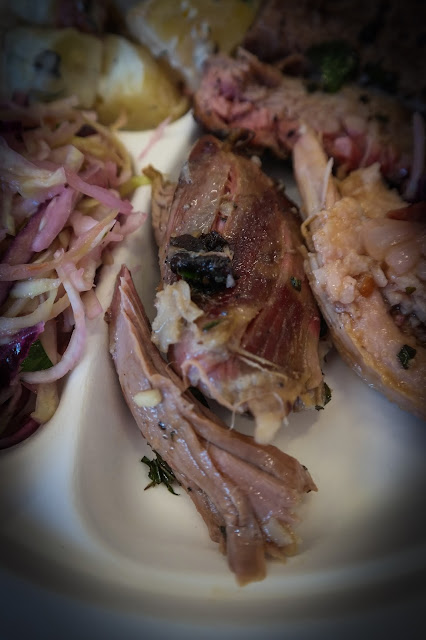 Now, as a general rule, I tend to avoid lamb when eating out and very rarely cook it.  I have nothing against lamb, honestly, it’s just that it can be so very hit-and-miss.  When it’s done well, it’s divine.  When it’s not, I find it way too fatty to be enjoyed.  Fortunately, this was a case of the former.  In fact, this was a case of hole-in-one, knock-your-socks off lamb.  The outer layers were nicely charged and smoky, and the whole meat was slow cooked so that it came away like pulled lamb.  But the flavouring was intense – a dolloping of chopped herbs and spices that left the meat still very much America BBQ-esque but somehow introduced all the European flavours that offset lamb so well.

And brisket.  Brisket is always, always going to be the star of any Texan BBQ show.  BBQ brisket is like a religion over there, as if it were the one essential component that you can’t really skip out.  It is kind of revered, and that’s a pretty heavy burden to have to carry. 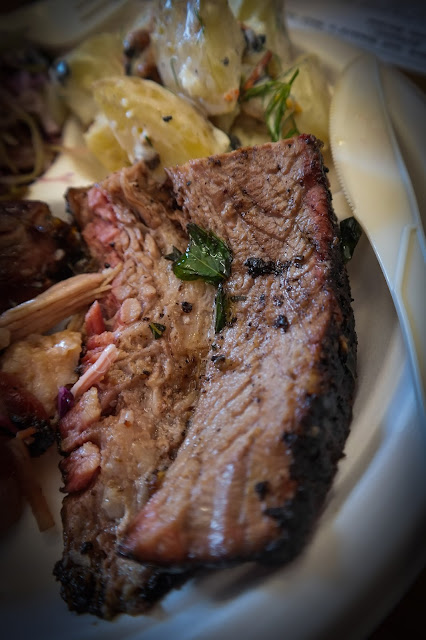 Here it’s executed to perfection.  Just look at it.  It.  Charred and crusted on the outside, there’s a distinct pink edge all the way around showing where the smoke has permeated the meat.  It’s soft as hell – you could spread this stuff on a saltine cracker without difficulty, which from a tough as originally tough as brisket is invariably impressive.  And it was oh so tasty, beautiful smoky meat, oh so good.  The BBQ sauce was a real winner with this too.  As was the porter we sampled as well – properly dark, rich and bitter, it worked wonders with the rich meat.

Then there was seconds.  SECONDS.  Good stuff. 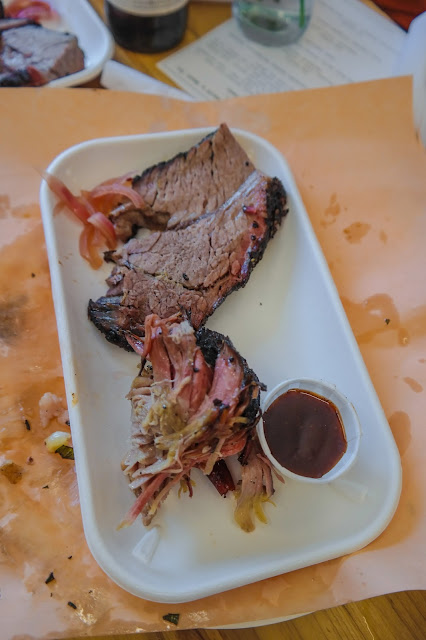 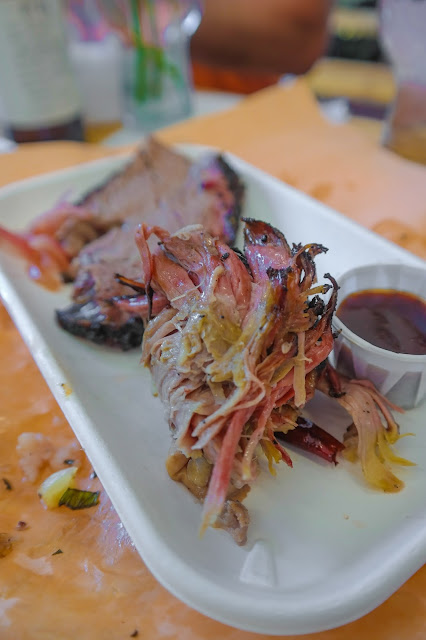 (Actually, I think there was way more than seconds – the couple next to us kept asking for more – although we were stuffed by this stage.)

Pudding came too, a millionaire’s brownie – basically a chocolate brownie with a shortbread base and a caramel top – accompanied by bourbon cream and strawberries. 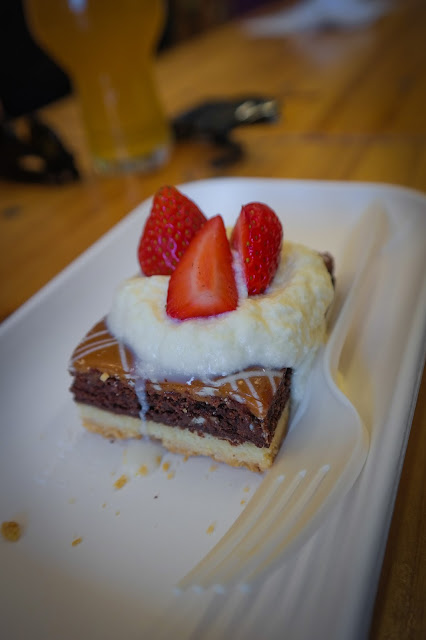 If I’m honest, this wasn’t the highlight.  It was with some relief that it was revealed Howard’s Meat Co. was not responsible for this – it was bought in.  I reckoned it was there because you couldn’t offer lunch to an Englishman without a pudding, but frankly I’d have preferred it if they’d thrown in another beer (the first was free), or shaved a couple of quid off the asking price.  But maybe that’s just me.

BBNo is running a series of these events – known as Dine Street.  I shall be watch their announcements closely to see what else is on the menu in future.  Provided the quality of food is remains that consistently brilliant, it’s a great thing to do on a Sunday afternoon, a nice break to the same old trip to the pub for roast beef and yorkies.  Similarly, next time I find myself at one of these oh-so-trendy food festivals I shall be keeping my eye out for Howard’s Meat Co. – because there I know I am going to get 100% quality, authentic Texan fare.  Top marks to both.
Posted by Grubster Boy at 11:13