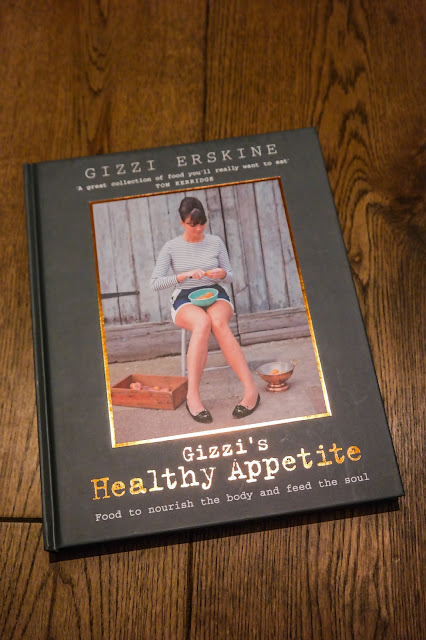 Let me try to paint a little picture.
Last week, I found myself in a restaurant – well, more of a pub – up in Islington, with GrubsterGirl.  We were there as part of a book launch for a new tome generated by a celebrity chef, which is all very well and good and exciting.  As we were sat, waiting for the first course to appear, someone from the kitchen came over to talk to GG about an allergy issue – basically a message had not been passed from front of house to the kitchen that GG has a mild nut allergy.
It was quite a squeeze in said pub and, due to the way the tables were arranged, I had my back to the chef who was talking to us and it would have been a pain to turn around.  Anyway, it was GG’s conversation and she was handling it.  No need to get involved.
However, I can hear that the chef talking to us is obviously pretty worried – who wouldn’t be worried about cooking for someone suffering nut allergies, mild or not – and is bending over backwards to try to deal with the situation.
And slowly it dawns on me.  We are here for Gizzi Erskine’s book launch.  We are having supper cooked for us by the author of that book.  The person talking to us from the kitchen must therefore be…
I twizzle myself round in my chair, awkwardly, to look up at the person towering above me.  It is.  It’s Gizzi frickin’ Erskine.  And she’s talking to my wife about how she’s going to tailor-make a meal for her, with no warning.
Call me some loser fanboy if you like, I don’t care – that’s pretty damn cool.
So where are we again?  The Draper’s Arms, that’s where, in deepest darkest Islington, near Angel.  It’s actually a very nice pub, in very nice little residential streets.  Gizzi Erskine has a new book out, called Gizzi’s Healthy Appetite, and we managed (through pure fluke, I might add – this is no sponsored post) to bag a couple of seats at a meal she was cooking to showcase some of the highlights.﻿ 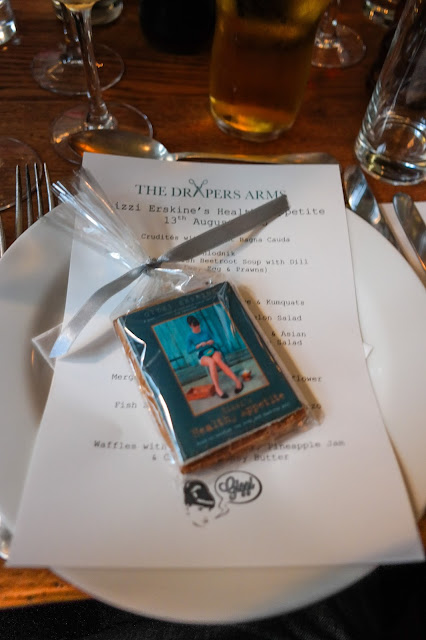 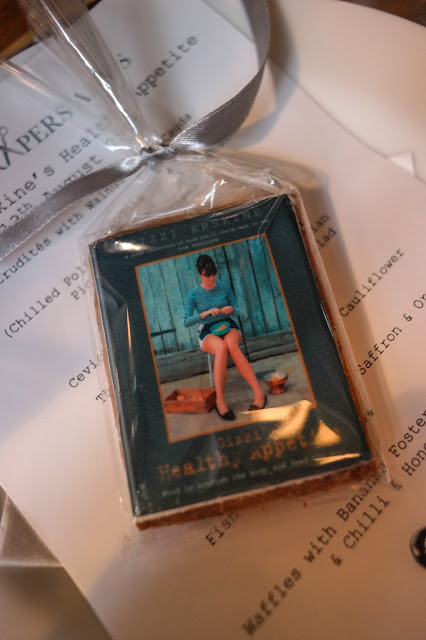 Note to self: Biscuits with my face / book (which I have never written) printed on them = Ultra Cool.

But enough mucking around, we came for the food so here it is.

First course was a sort of appetiser course.  First dish out was walnut bagna cauda. 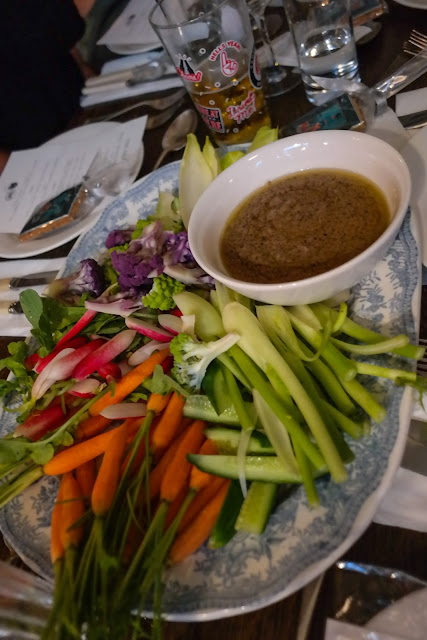 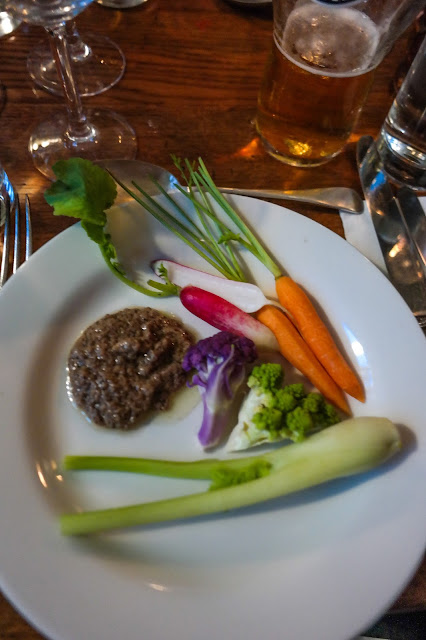 Bagna cauda, for those of you who don’t already know what it is (okay, I too had to look it up) is a Piedmontese dish – a sort of warm dip often eaten like a fondue.  In this instance it was served with crudités (always reminds me of the line in The Real Thing by Tom Stoppard: "Crudités! Perfect title for a pornographic revue.") which were made from wonderfully fresh, high quality veg.  I thought this dish was absolutely amazing – I was a bit concerned that it would taste a bit like the walnut equivalent of peanut butter (if there is such a thing) but not even remotely.  The fact that it was warm really added something as well.  Rich and more-ish.  Very nice.

Then we were presented with little bowls of stuff.  Dill, peeled baby prawns, pickles and a boiled egg, quartered. 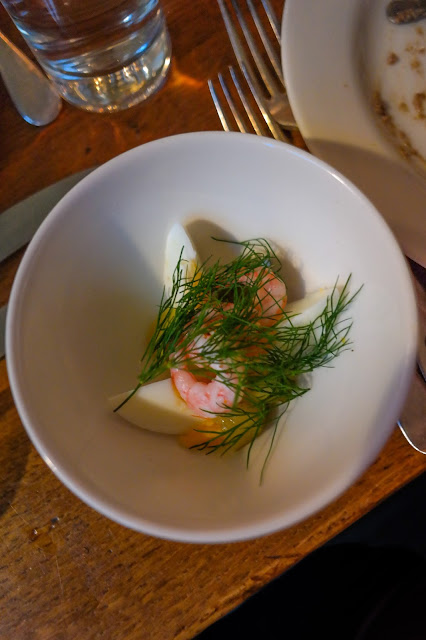 Minutes later jugs of bright purply-pink ooze appeared and we were asked to fill our bowls.  Which we dutifully did. 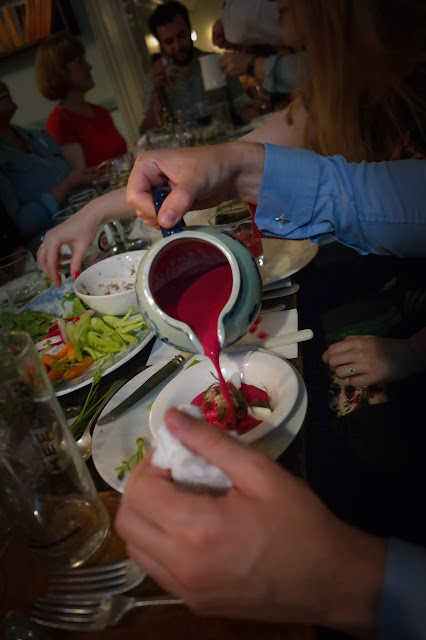 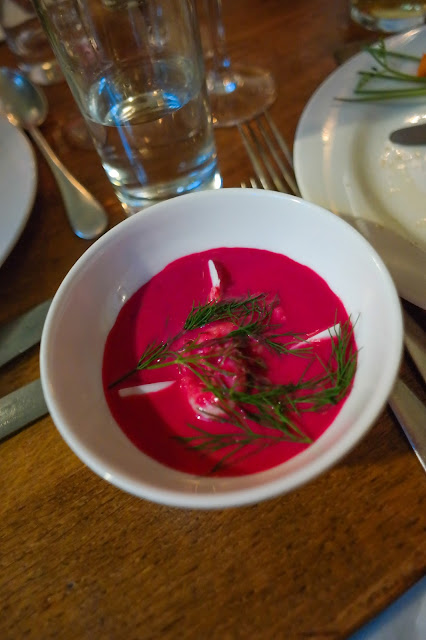 What, you don’t know what chłodnik is either?  Dear oh dear.  I’ll tell you.  It’s a soup.  Specifically, it’s a Polish soup made with beetroots and buttermilk, served cold.  It’s also bloody delicious.  Looking at the recipe in the book, it seems pretty simple too and is wonderfully refreshing on a hot summer’s night.  Actually, flicking through the recipe book last night I was thinking: there's a lot here I want to make.  Chłodnik is just one of those things.

Next course was a medley of three dishes, everything arriving at the table on large plates to be eaten ‘family style’ as they say in the United States.

The first to arrive was Thai roast duck with watermelon salad. 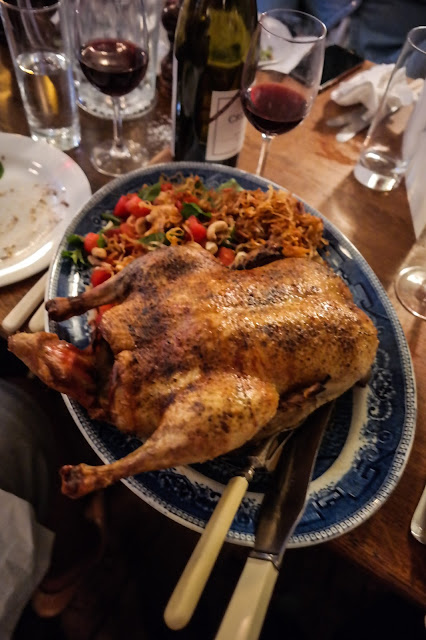 It’s difficult (nay, impossible, says I) not to like this dish.  I bloody love watermelon salad, so it basically boded well from the start, but this was executed perfectly.  I loved the effect of sweet, refreshing watermelon balancing out the rich, fatty duck.  I’ve always liked duck with fruit sauce but always erred for sharp fruits, such as redcurrants.  I would never have thought of using sweet fruit but it worked an absolute treat.

Next out was crispy chicken with spiralized vegetable noodle salad and satay sauce. 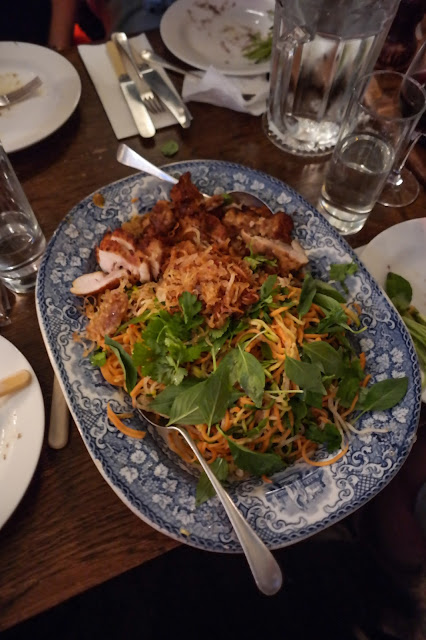 GrubsterGirl got her special food mountain plate, due to her allergies, which was pretty sweet. 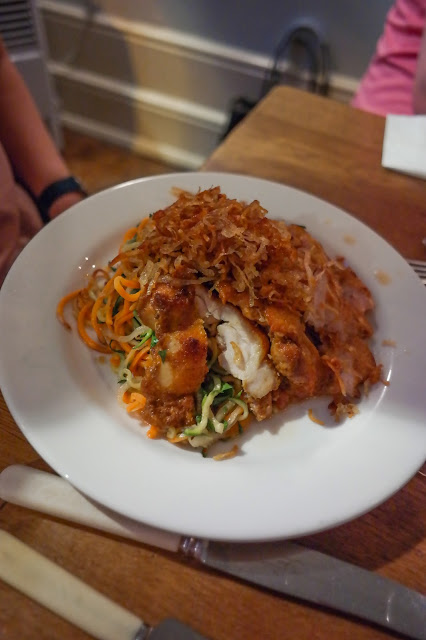 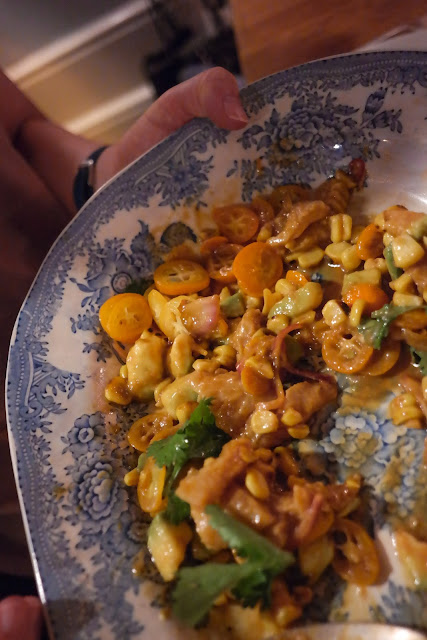 OK, I admit it, this is a completely awful picture.  Sorry about that.  Basically, I missed this coming out (too busy stuffing my face with the first two excellent dishes) and by the time it got round to me the dish had basically be destroyed.  Which is a shame because, from other pictures I’ve seen, it was pretty good looking.

Fortunately, there are some dishes you cannot spoil with bad looks.  This was one.  I bloody loved this.  The raw fish was marinated in yuzu, sesame and kumquat (finally answering a question I have been asking all my life – what are those little orange things for, other than making rank Corfiot liqueurs?).  Also in there was sweetcorn and avocado in there too and it was topped with coriander, basically making sure that all of my favourite flavours were mixed up into this one, fantastic dish.  I will be making this at home, for sure.

So that was the first course, top marks. 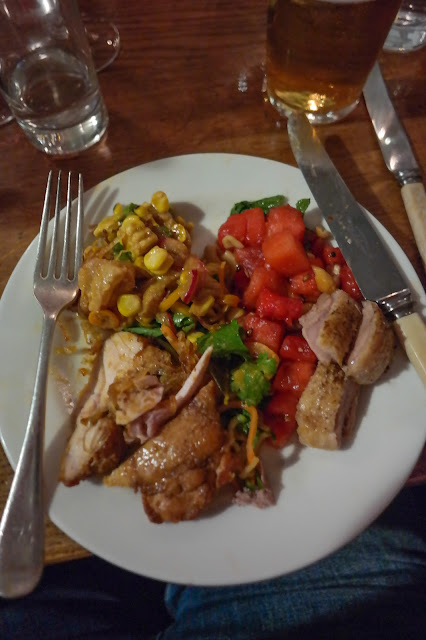 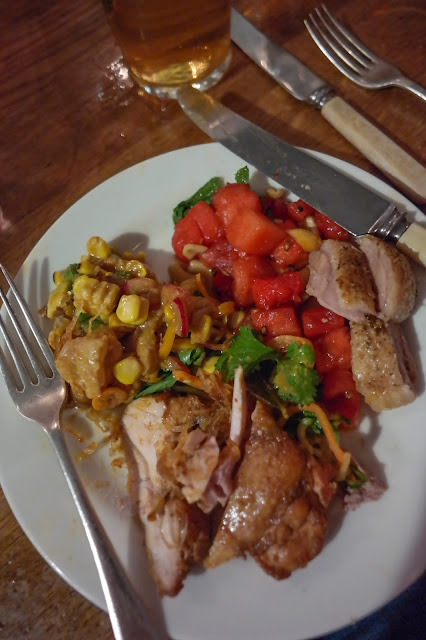 Now onto the mains. 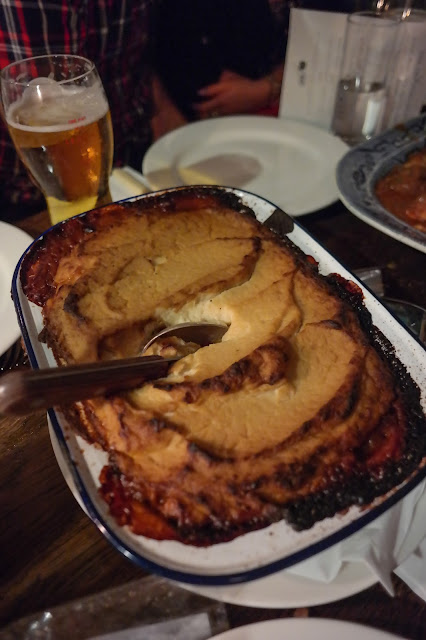 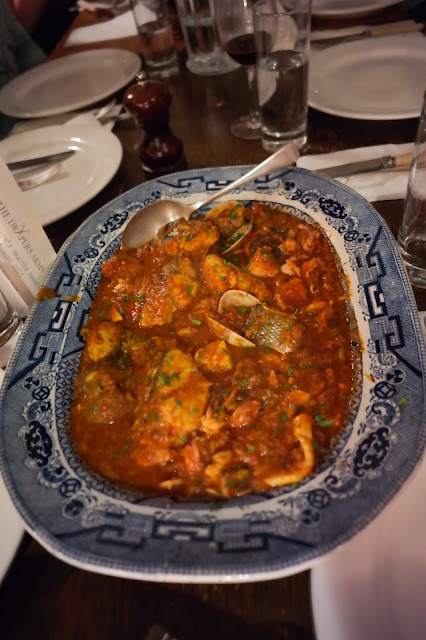 Starting with the fish stew.  Very nice, if not my favourite dish of the day (but then, I’m not a huge fish eater).  A medley of fish, including some beautifully tender and tasty baby squid and some clams.  The sauce was basically the very traditional bouillabaisse Provençal (flavoured with fennel and saffron), which goes so well with fish and brings out all those salty, seafoody flavours.  There was also orzo (little, rice-like pasta) in there too, although to be honest it was a bit lost on me. 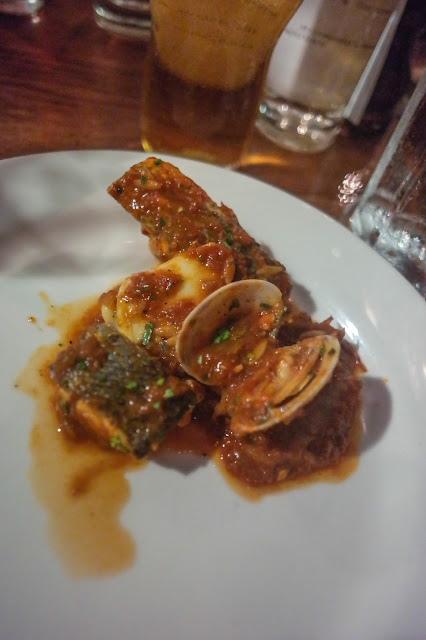 Then the Shepherd’s pie.  I have to be honest, at the time I was not really sure what makes this particularly ‘merguez’.  I thought merguez were those spicy sausages you get in Morocco (in fact, I know they are, having eaten them there).  But who cares, it was still pretty damn tasty - and, having checked, the stuffing is a mix of slow roasted lamb shoulder and merguez sausages.

The topping was an interesting choice - cauliflower mash.  Now, if I’m honest, this doesn’t have the same consistency and unctuous-ness (Is that a word? It is now.) that good old mash has – it’s a bit looser, a bit less rich and starchy.  But it still works – and not just that, it’s still good.  In fact, it’s a much healthier yet still tasty equivalent.  Think semi-skimmed rather than full-fat milk – ok, sure, it’s not got the same wow factor, but it’s basically just as nice with much less fat. 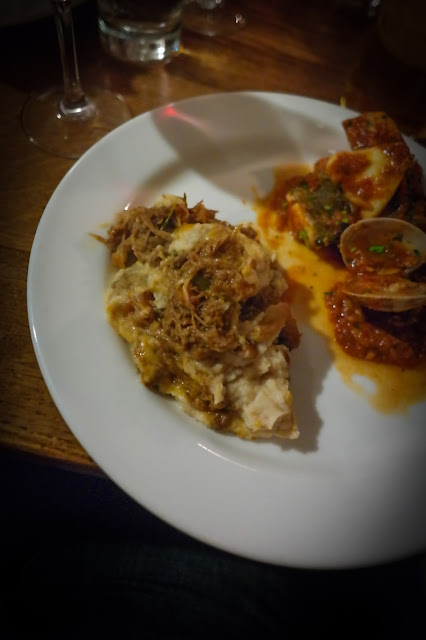 By now, we were feeling pretty well fed.  There were a few words spoken, and Gizzi made a little speech talking about the food and what the book was trying to achieve – healthy eating without all the fad diets.  I thought she’d managed that quite well, with what I think sounds a fairly sensible approach – little changes and big flavours, which is a much  more manageable attitude.
Then she said something great:  “It’s all been healthy… well, except for dessert.” 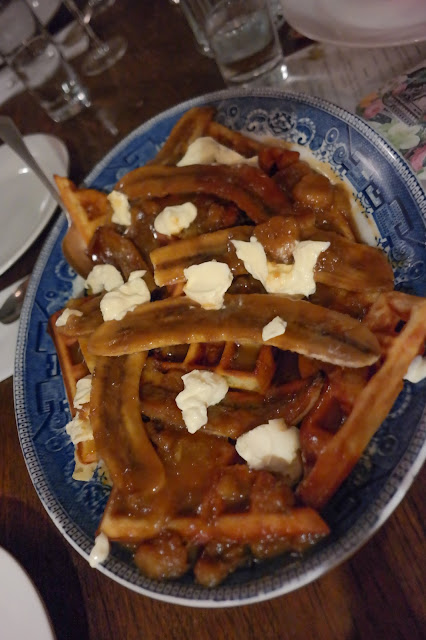 So, yes, pudding was pretty dirty.  In a good way.

Waffles, topped with roasted bananas, pineapple jam, and a chilli and honey butter.  The bananas were cooked ‘Foster’, which means flambéed with butter and sugar, which is just brilliant.  As I’ve said elsewhere, I’m sure, I generally don’t go in for hot puddings, preferring a scoop or two of sorbet at the end of a big meal.  But I am more than happy to make an exception for a dish like this.  The hot, caramelly bananas , with their sticky sweetness and background sharp twang that they take on when cooked, transported me back to the cadet camps and bonfire nights of my youth.  This was decadence in a pudding. 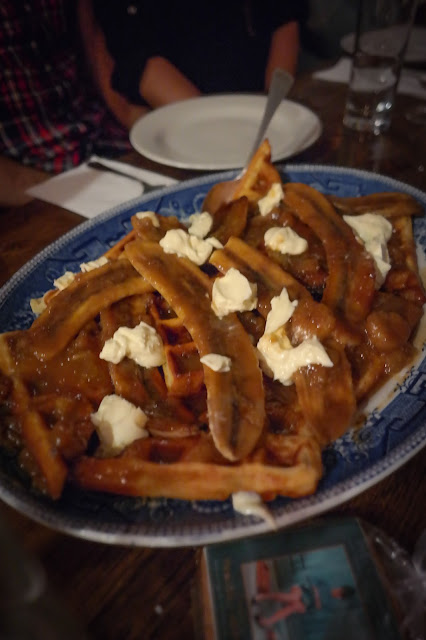 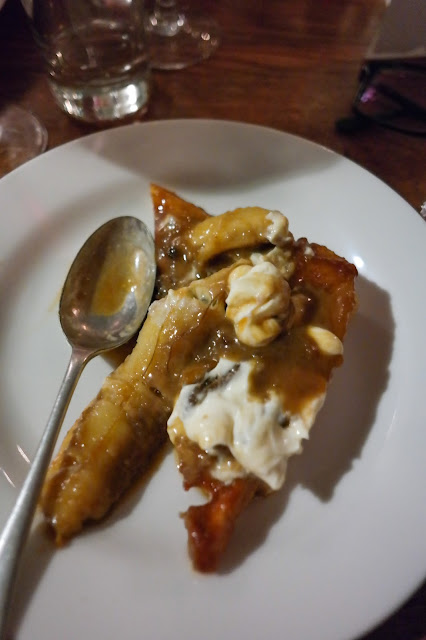 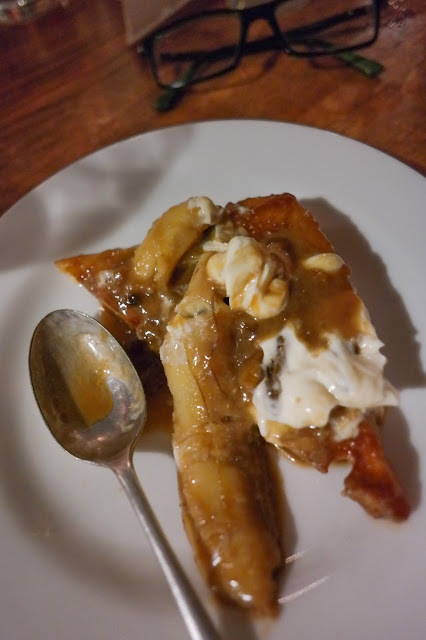 What a meal.  At the end each diner was given a copy of the book, signed by the author and head chef.

Meeting Gizzi (again?) was pretty cool.  Turns out, she’s a really lovely person.  They say don’t meet your heroes and I think it’s too often true.  That's not true of Gizzi – she's warm, friendly and welcoming.  Which is a lovely way to end a meal. 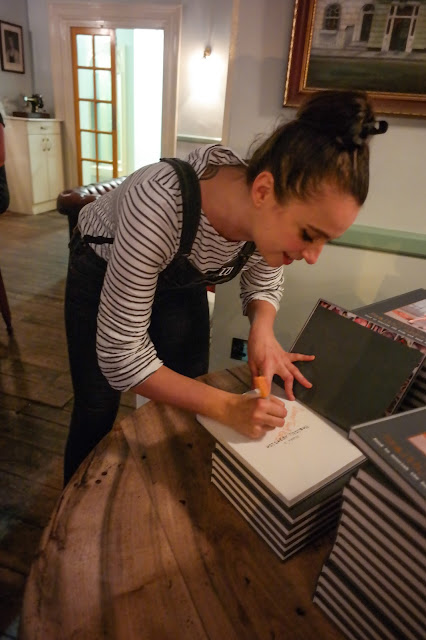 So yes, I have a new book.  And that was the story of how I got it. 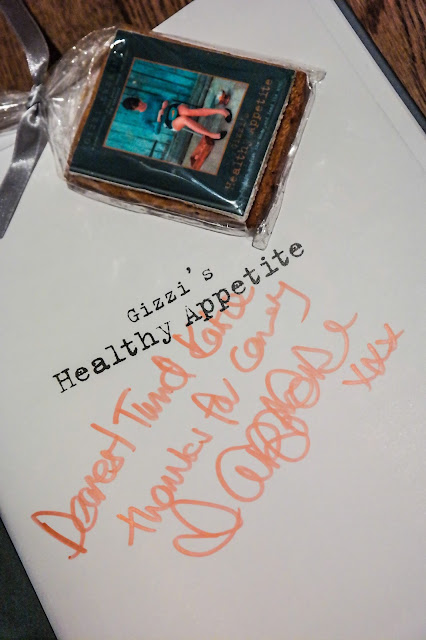 It’s signed and everything.
Posted by Grubster Boy at 10:55