When President Kennedy, misquoting Dante, said that “'the hottest places in Hell are reserved for those who in time of moral crisis preserve their neutrality” I assume he was, in fact, talking about the second hottest place in hell.  For, as all of us who live in London know, there is a small, dark, nasty and especially hot corner of hell that is reserved for those who choose to eat their donner kebab or fried chicken bucket on the last Tube train from Leicester Square to Camden Town in the wee small hours of Saturday morning.

I have never really understood people who eat on the Tube.  It’s gross.  Every surface of the Underground has been sat on , leant on, breathed on, farted on or in some other way contaminated – not least of all with the all-pervading black soot that seems to cover every external surface of the trains, stations, escalators and tunnels.  Why anyone would want to eat in that environment is a mystery to me.  There’s also the (anti)social aspect.  The Tube is infamously cramped lurches side-to-side on its tracks and fore-to-backward when starting and stoping.  The last thing I want is to be mere inches away from someone scoffing down some messy dinner in those conditions.

And then there’s the smell.  Oh my God, the smell.  Because the confined, tomb-like spaces of a tube train always make even the nicest dish smell like a festering corpse.  Leave it out, I say.  Stay hungry for just a few more minutes, until above ground where you can enjoy your feast and everyone else can enjoy not vicariously experiencing it.

So, you may have guessed, I am no fan of Tube-munchers.  But, I have found an exception.  And that is in Basement Gallery’s amazing Underground Supper Club.

First, let’s talk about the setting.  Because the venue is found in the yard out the front of the Walthamstow Pumphouse Museum – in itself a marvel: a beautiful piece of Victorian industrial architecture housing a fascinating collation of local road and rail history as well as two original steam powered sewage pumps, amongst the oldest of their kind in the world.  The yard out the front is a scrapheap scavenger’s dream (albeit one you cannot, in fact, scavenge from).  It is choc-a-block with vintage vehicles, including old Routemaster buses and Bedford trucks in varying stages of refurbishment. 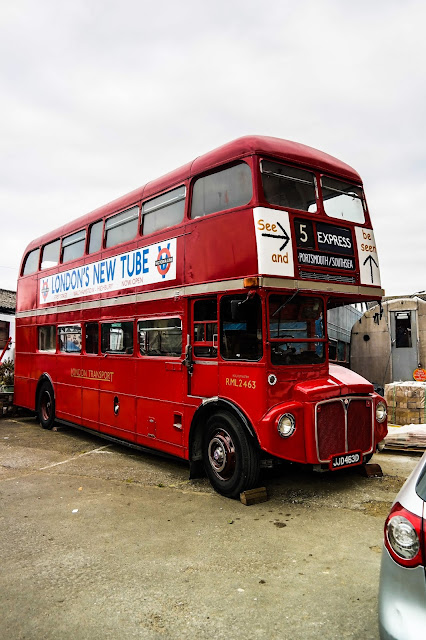 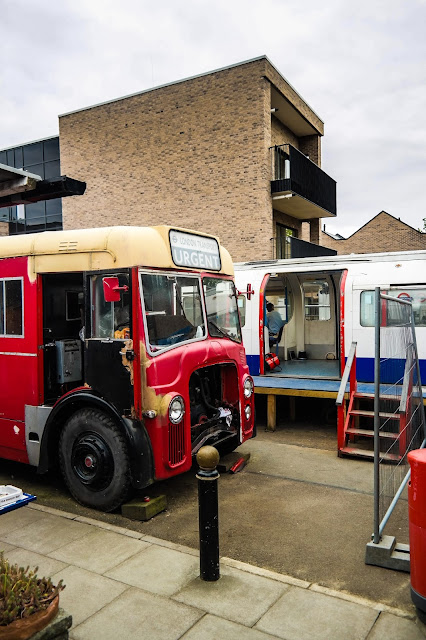 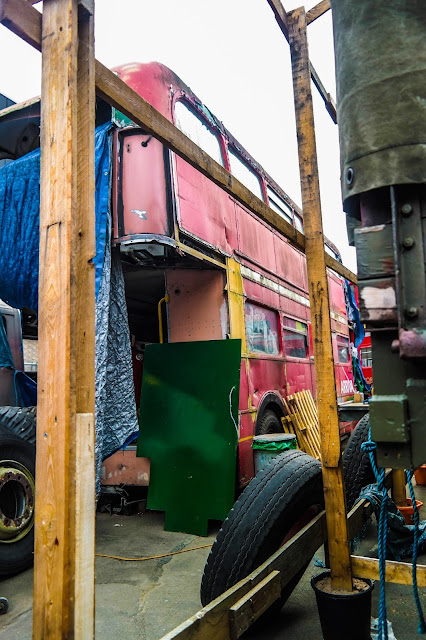 Tucked around the back is an old Victorian traction engine – a beast that, a hundred years ago or more, began to spell the death knell for the old carthorse way of doing things. 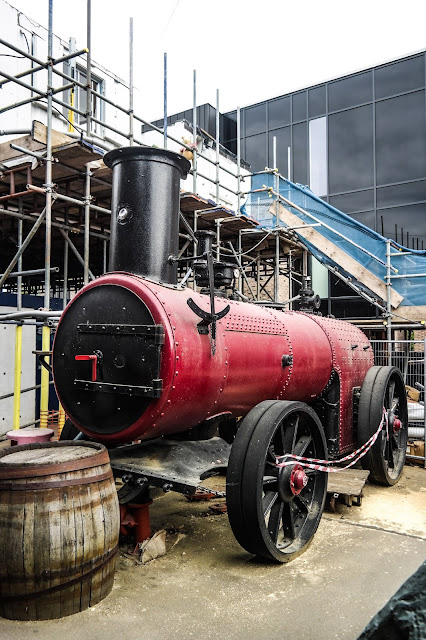 And then there’s this.  An old Tube train – of 1967 Stock, to be precise (although heaven knows why you’d need to know that). 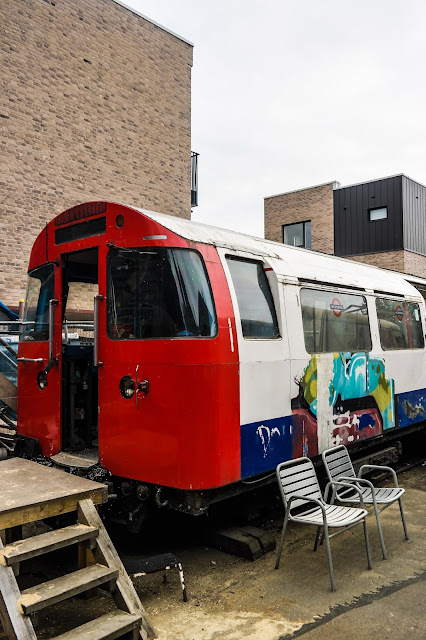 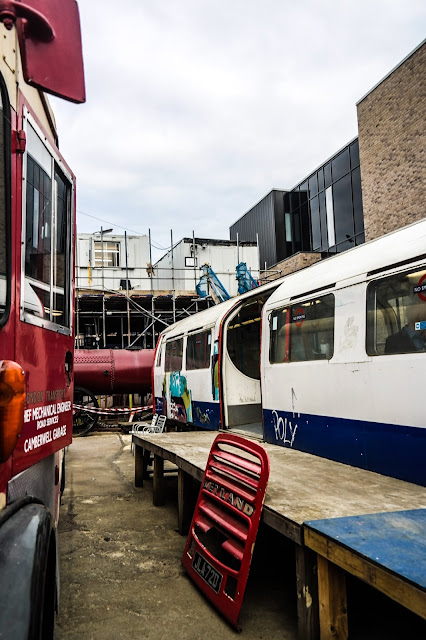 This beast, built in Rosyth, ran on the Victoria Line from 1968 until 2011, when the current rolling stock was introduced, and was one of the most reliable beasts of burden ever devised by the now defunct Metro-Cammell.  These unsung heroes were stunning feats of engineering for their time, averaging 14,000 kilometres between engineering failures and operating the world’s first automatic underground train system.  I’m no spotter, but it in a time when Britain manufactures precious little and has to buy its rolling stock from the French, the Dutch and the Germans, this humble beast is, when you think about it, something to behold.

We even got to play in the driver's cab, which was pretty cool. 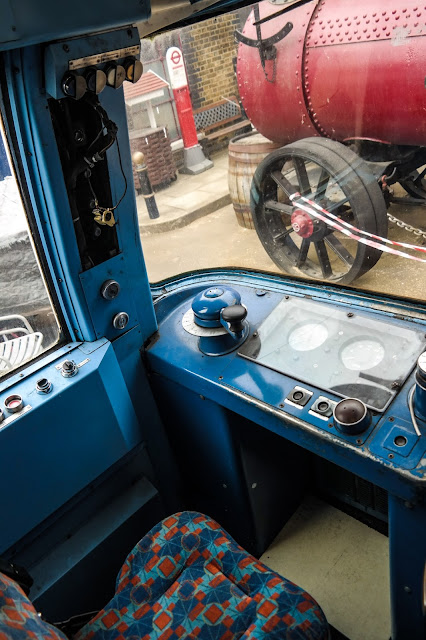 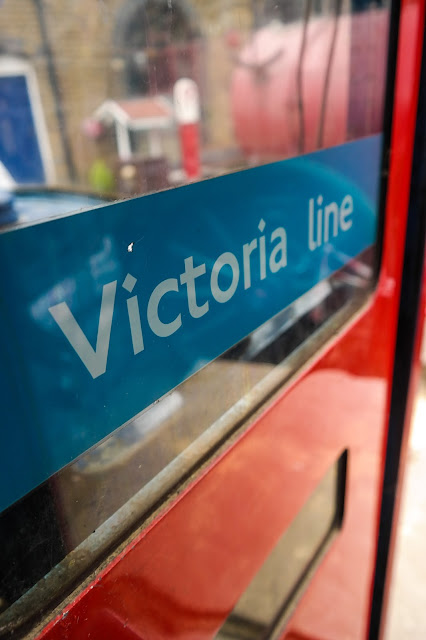 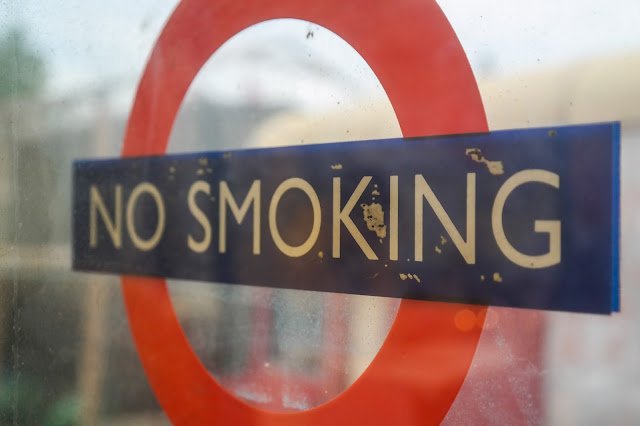 But enough about that, this is a food blog and we’re here to eat.  Time to tuck in.  Of course, the ‘restaurant’ we’re eating is – you’ve guessed it – the old Tube train itself. 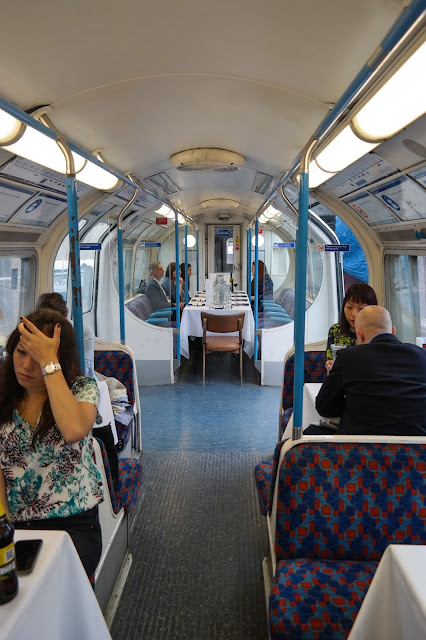 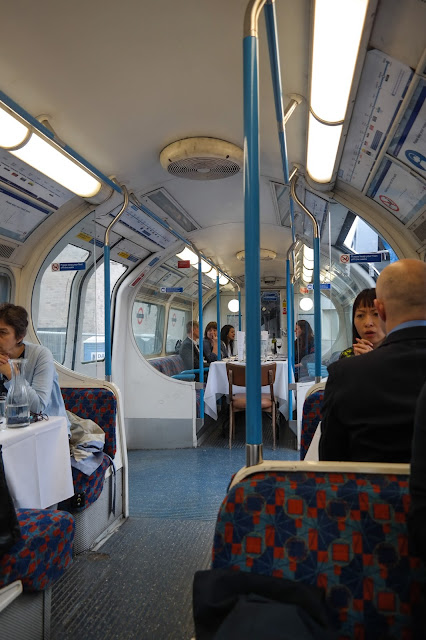 We were lucky enough to be granted a little booth.  Do you remember these, old-time Londoners?  I think they still have them on some of the old District and Metropolitan Line trains, but they may have gone.  How awkward were they, eh?  Hardly enough room, sitting knocking knees and strenuously avoiding eye contact with the stranger opposite, and taking up way more space than they warranted.  A throwback to a bygone era when only men in bowler hats and stripy trousers clutching cane-handled umbrellas and copies of The Times used the Tube for commuting.  No use at all in today’s daily scrum for standing space.  Fortunately, for all the times I cursed these little booths when they were in operation, it was remarkably comfortable and space wasn’t an issue.  Indeed, in a way it felt far more intimate than many, sometimes Michelin starred, restaurants I’ve eaten at in the past.  Which is a damned funny thing to say about a tube carriage. 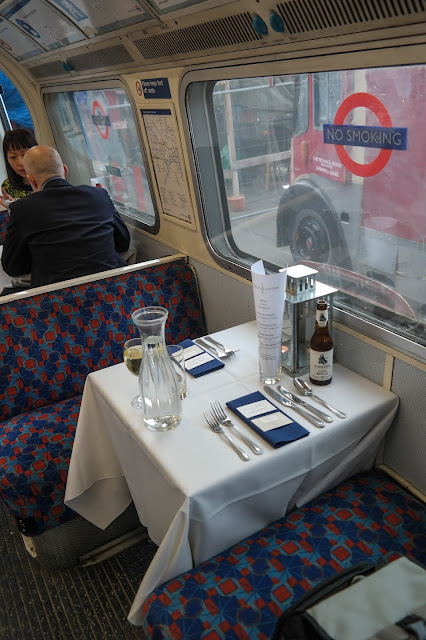 Before we get to the food I ought to say a couple of things about our hosts.  First up, the organisers were Basement Gallery, a business that runs supper clubs and (in particular) this London Underground dining experience.  The chef for the night, however, was Alex, the man behind The Pickled Fork, another company specialising in pop-ups and private catering.

Proceedings kicked off with a cold crab consommé, stuffed with seasonal British vegetables.  It came served in twee little jars that you had to pry open yourself (actually, not a bad idea if you’re trying to serve food in the confines of a Tube train). 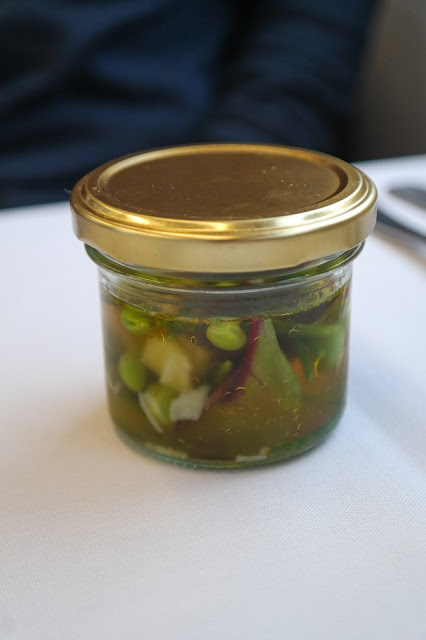 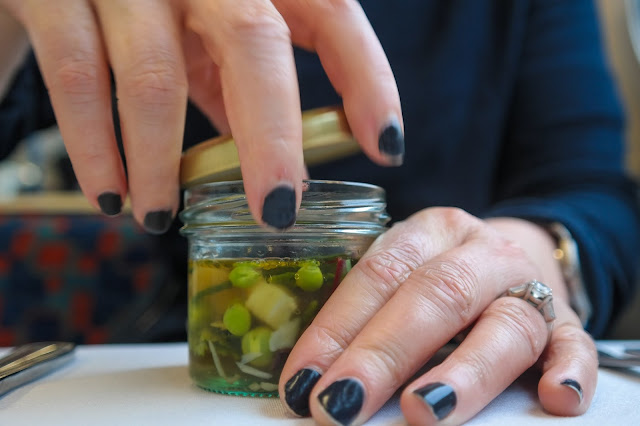 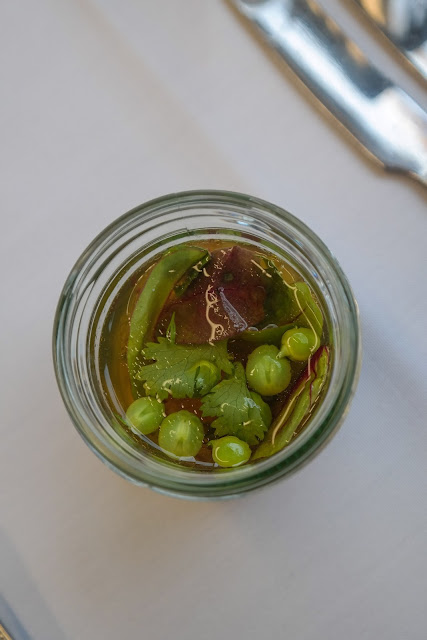 The consommé itself was delightfully crabby (as regular readers will know, I have a real soft spot for crab) with healthy chunks of white meat and a rich overtone in the liquid of brown meat and crab stock.  What was so lovely about this was that all of the green stuff contained within the jar was fresh and raw, giving it a wonderful spring / summer feel.  One thing that shocked me – in a good way – was how well the slight bitterness of raw peas compliments shellfish.

Next up were beer and buckwheat pancakes, topped with marinated broad beans, British ‘nduja, smoked yoghurt and mint dressing. 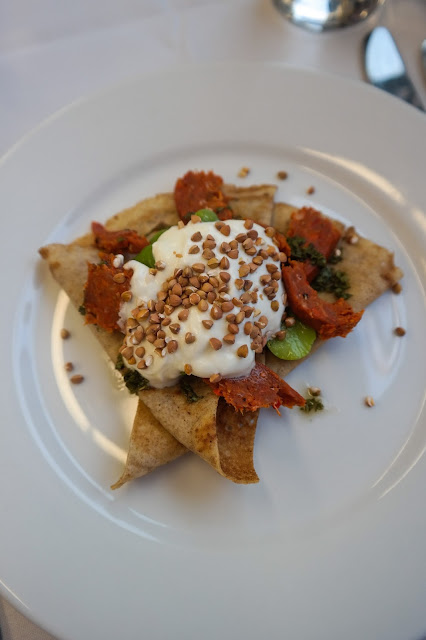 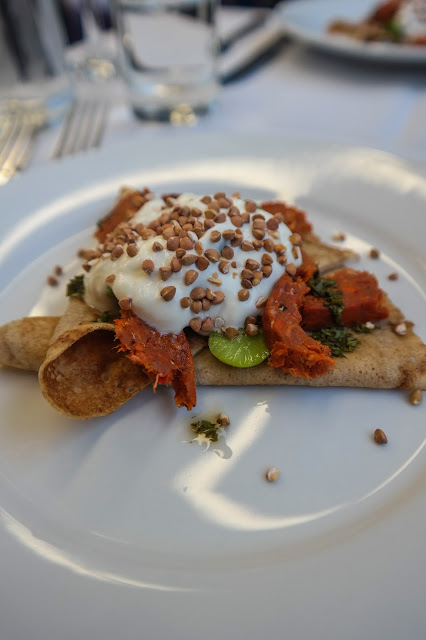 The pancakes themselves were surprisingly light.  I had expected them to be heavy and stodgy but they were not at all – a blessèd relief.  As for British ‘ndjuda – top marks.  Britain has a sorry history with cured meat, preferring, it seems, to process then cook it (think sausages and pies for example), but now it seems like we are starting to muscle in on territory previously occupied my our European neighbours.  This was delicious, and went well with the beautiful beans and the sharpness of the yoghurt (although I couldn’t quite detect the smoke in the latter, not that this seemed to detract from anything at all).  Sprinkled over the top was a helping of buckwheat, dried or roasted somehow to make them very palatable indeed – as well as adding essential texture, a real sign that here is a chef thinking seriously not just about flavour but about the whole mouthfeel too.
It's worth noting also that, throughout the meal (almost) I was drinking this stuff. 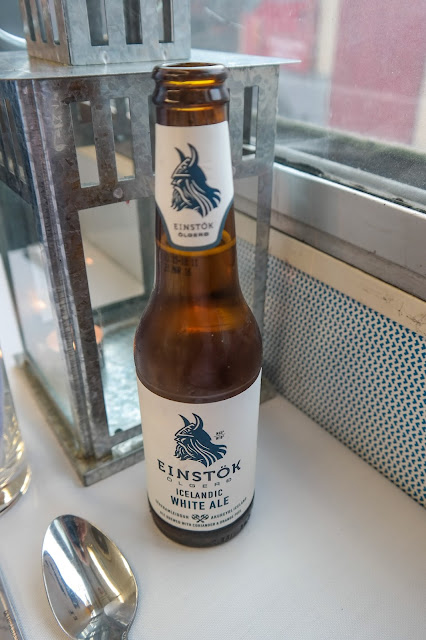 It's really, really good.  I've never tasted Icelandic beer before, although in fairness I have seen this on sale elsewhere.  It's crafty, but infused with orange peel and coriander - so it's especially fruity and herbal and a really fantastic accompaniment for food.  I wouldn't normally drink beer with a meal like this, but this one tasted right.  Towards the end (with the main course) they sadly ran out - it was popular throughout the carriage, I could see - and I had a glass of their Tempranillo.  Foolishly, I forgot to right down the details or photo the label, because it was spectacular.

Anyway, onto the main.  This was short rib of beef – something that will always get GrubsterGirl and I excited, given that it was what we chose to have as the main at our wedding. 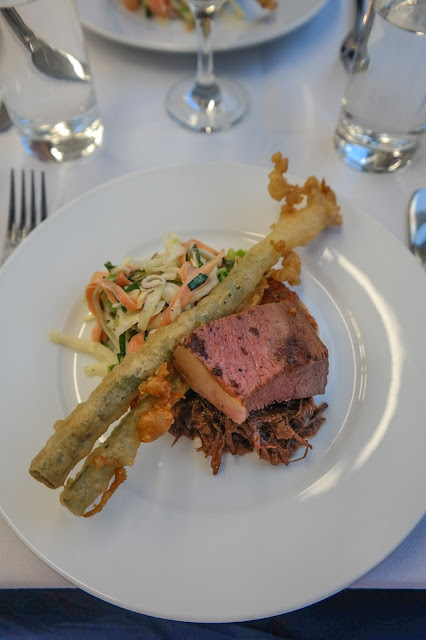 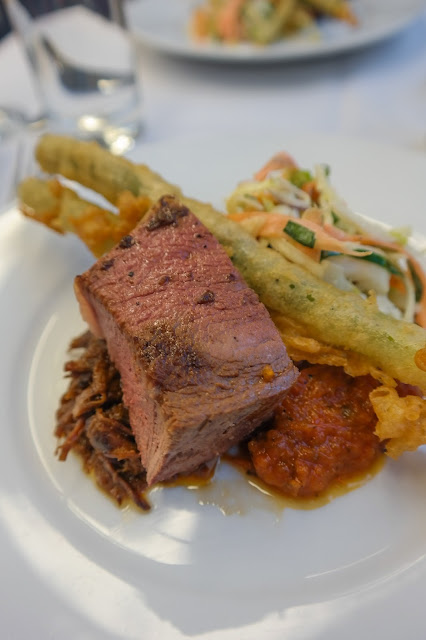 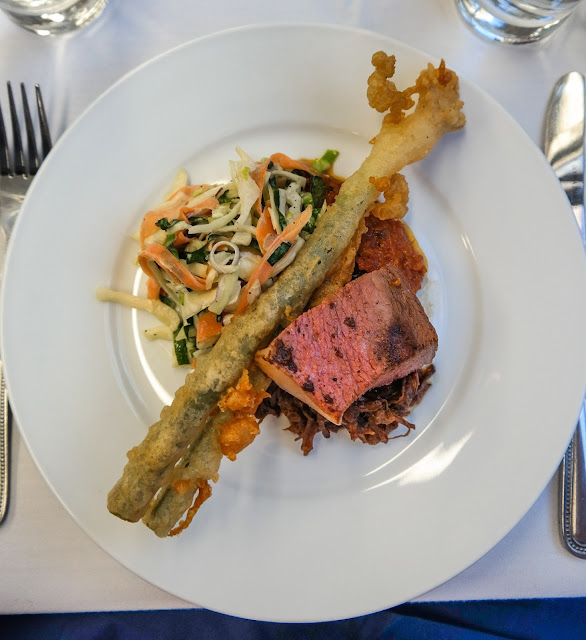 This was cooked two ways – slow, braised, pulled rib meat which was all sweet and sticky rich and dark and delicious, and a roasted cut, which was tender (a surprised, given it was rib) and juicy and lovely.  My only criticism would be of the cut, which maintained at one end a section of tissue.  This made it look good and hold its shape, but was utterly inedible and should have been just removed.  Otherwise, the meat was cooked to absolute perfection.

The sides were awesome too.  A perfectly done coleslaw – still crisp and crunchy, with a dressing light enough not to drown the meat but heavy enough to have its say.  Roasted tomato relish was brilliant as well, clearly made fresh and the perfect foil to the meat.  And that fried thing?  Well, that’s the best alternative take on an onion ring I have ever tasted – a spring onion, with tempura batter fried in beef dripping.  Superb. 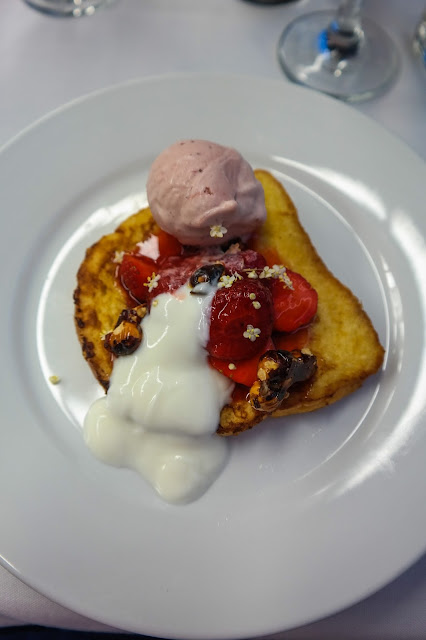 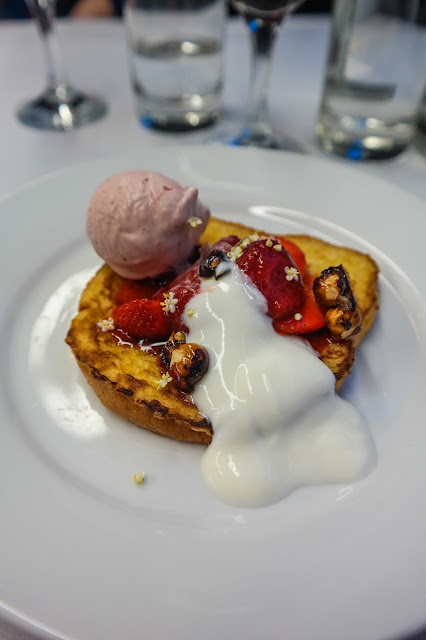 Another triumph.  I feared that the French toast would be huge and heavy and stodgy, but it was none of those things.  Instead it was light and delicious, possibly made with some sort of brioche to keep it sweet and rich without being heavy.  The strawberries were lovely and the ice cream delicious – and both were perfectly matched by the buttermilk, which was sharp enough to counterbalance the sweetness of the other flavours without outweighing them.  The dish was nicely scattered with little elderflowers as well which, in addition to being aesthetically beautiful, created little elderflower flavour bombs which went pop with each mouthful.

It seems to me that there are two particular traps that Basement Gallery / Pickled Fork could have fallen into with this venture.

First, they could have somehow ‘themed’ the food.  I’m not sure how, but perhaps they could have made in ‘London’ themed (think London Peculiar pea soup, or gherkin / cheesegrater / etc. food, or Tubular sausage rolls, perhaps) which would have meant more effort was going into making the food hit a theme than making it hit the mark.  I loved the theme – dinner in an Underground train – and loved even more that it stopped there and the focus shifted to the food.

Second, they could have just not bothered that much with the food.  I expect – no, I am certain – that they sell out because of the venue (you’re dining in an Underground train, which is pretty cool) not the food.  They could have cut corners, they could have not cared overly, they could have just got a lot more bums on a lot more seats and flogged dinner for, frankly, a lot more money.  But they didn’t. Instead, they have chosen to focus on producing top quality, delicious food at a reasonable price and limiting the number of dinners to ensure that they can hit the standard they want to hit.  And that is truly admirable.

I don’t know when was the last time the London Underground ran a First Class service [Ed: it was 1940] but we genuinely felt like we’d experienced one when we left.
Posted by Grubster Boy at 13:33