A few months ago a new joint opened up on Clapham Common called Fields.  Being locals, and foodies, we didn't hesitate to go along and sample its wares, which we enjoyed very much.  In fact, we enjoyed it so much that we've been back several times since, and even persuaded family and friends to come along and enjoy a bite.

Having rated Fields so highly, it seemed only right and proper that we try out M1LK, Field's big sister café (M1LK was the first).  So here we go.

First up, like so many other joints that M1LK is formed from the same mould as, this place is achingly trendy.  It's got the industrial chic look pretty much nailed.  It's got the mismatched, slightly uncomfortable furniture.  It's got the epic queues on a Saturday or Sunday (although go early on either day, or any time mid-week, and it's a doddle to get a table). 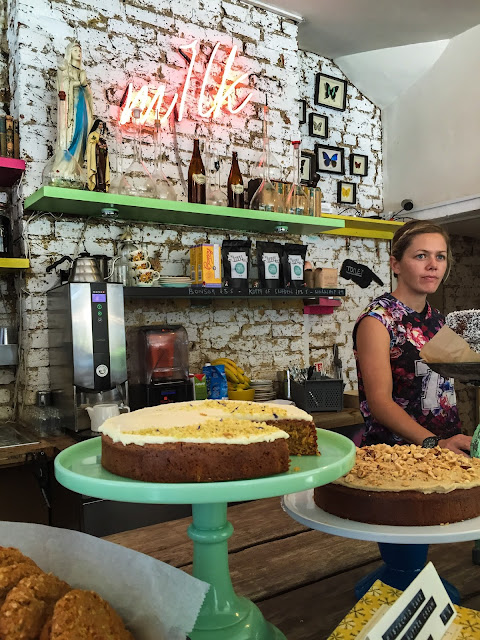 I'm always, I'm afraid, slightly wary of the hipster, trendy look - and in particular, places that are uber popular (remember The Breakfast Club?) - mostly because it's usually all a ruse to disguise a really rather average offering ﻿that's massively overpriced.
Spoiler Alert: M1LK is not that.  M1LK's awesome.
Let's start with the coffee, hey?  Because, just like Fields, M1LK sells awesome coffee.  Like, really, really good coffee, made with full fat unhomogenised milk (naughty but so yummy) and tip-top quality coffee beans.  I mean, this is good coffee.  I seldom have more than one cup a day, but this stuff has me going back for three or four. 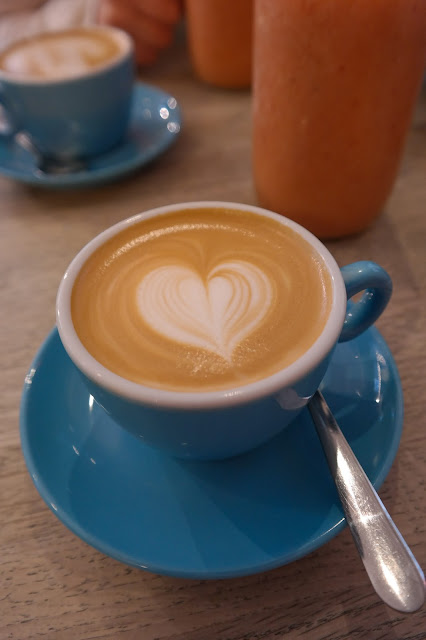 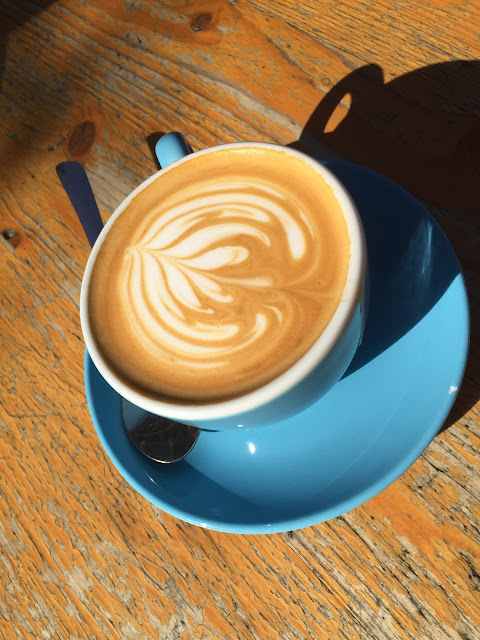 Then there are the smoothies.  Holy cow.  This was the one thing I thought Fields really was lacking - there was no fresh juice (although, good news breakfast fans, that's been addressed slightly now).  M1LK does big, old-fashioned milk pint bottles (very cool) full of deliciously tasty, fresh mulched fruit.  Very good stuff. 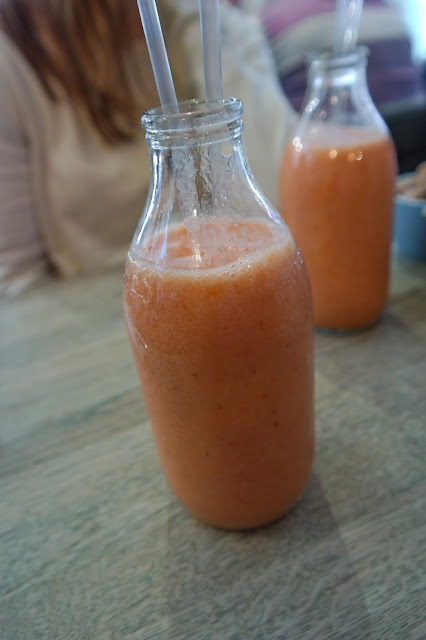 Now, on to the bit that you've probably actually interested in.  The food.

M1LK does not disappoint.  First up, The Convict. 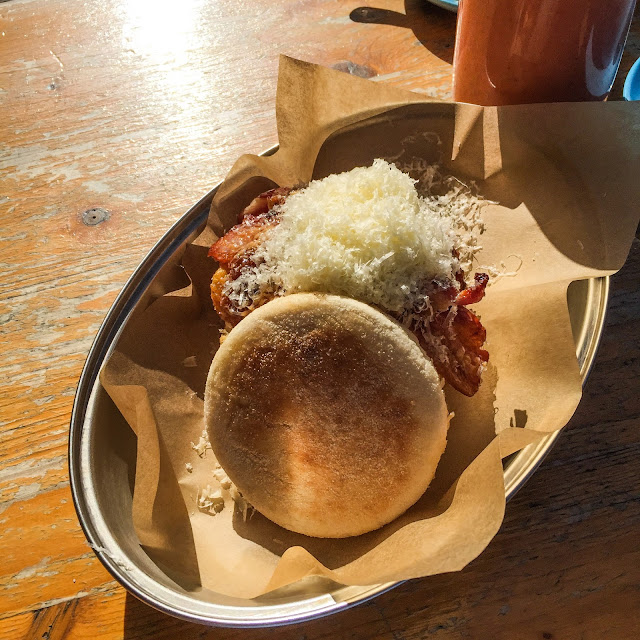 Kinda like their signature dish, this is the closest you're going to get to a Full English at either restaurant.  It is, in fact, an English muffin filled with bacon, sausages (from Moen's, so local), a Burford Brown egg, hash browns and something described as "hangover sauce" which is a lovely brown sauce-esque condiment that offsets all the greasy food beautifully.  The stuffing is also topped with grated cheese, which is also pretty ace.  This is a good breakfast.  Hearty.  Hangover-defeating. 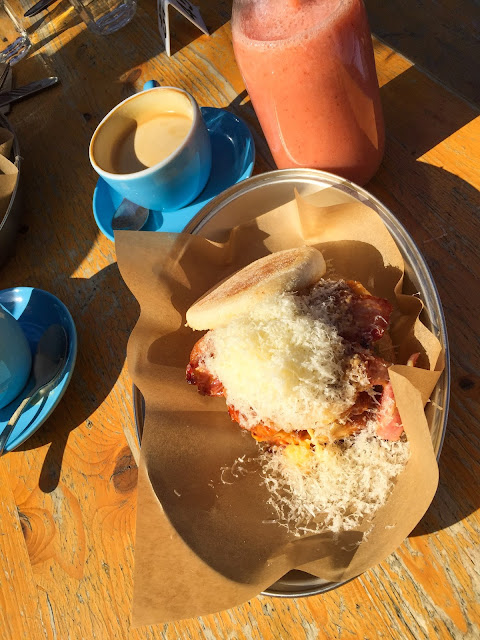 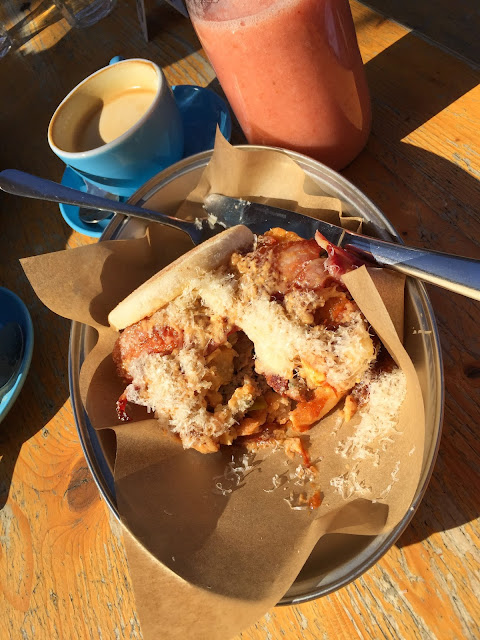 Here we have also the Sweet Maria.  Sweetcorn fritters with grilled halloumi, avocado and  kasundi (a kind of Indian tomato relish or pickle).  Again, really ﻿brilliant but this time more appealing, perhaps, to those who like to start their Saturday mornings off with a spot of yoga (Mrs G) rather than nursing a post-Friday night throbbing head (Mr G).  Lots of lovely, fresh flavours - I doubt, actually, that it's that healthy but it certainly tastes it, and has the advantage of being simultaneously really tasty. 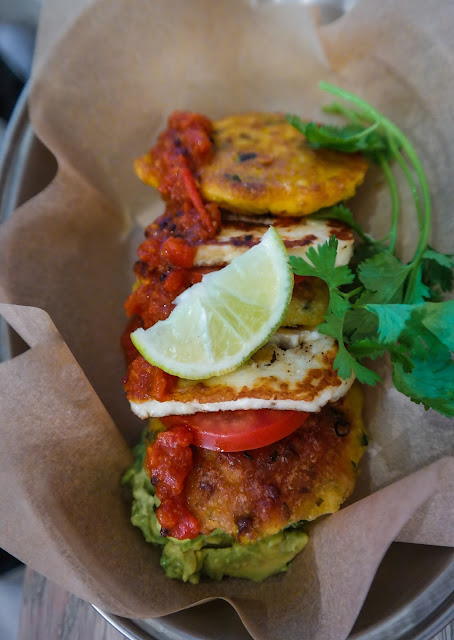 Then there are the baked eggs, which you can have with sausages or with butternut squash.  No surprise, we went for sausages.  Technically, these are kasekrainer, a type of German sausage with small bits of cheese mixed in with the stuffing.  I've never had them before, but they were good.  Also mixed in the pan was wild ransoms (a bit like wild garlic, which has more of a spring oniony flavor, in my view, than a garlicky one), labne (a type of yoghurt) and wild flowers.  All this made for an aesthetically stunning dish which was still pretty good (but, I am afraid, lost out in comparison with the others). 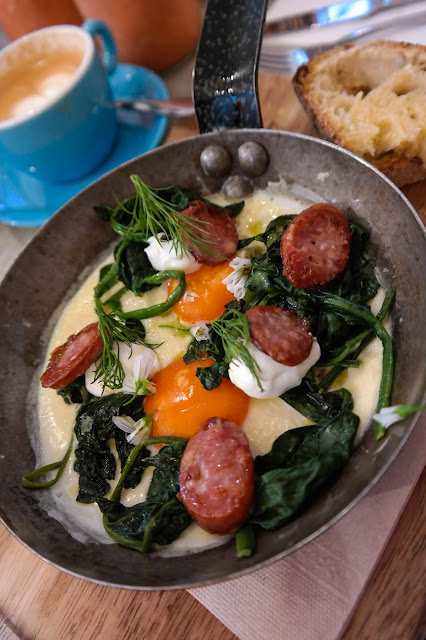 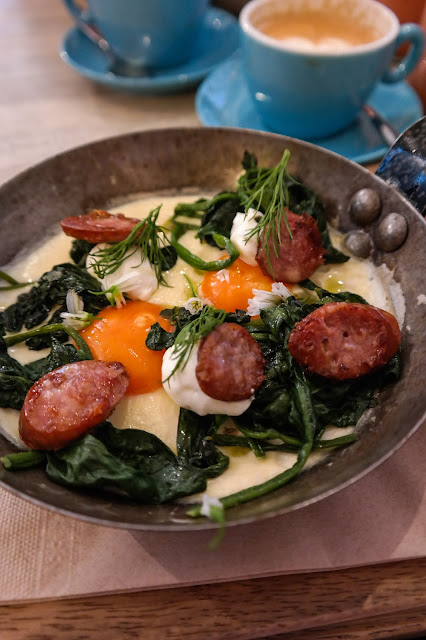 Much like Fields, M1LK also does a range of baked stuff - from cakes to cookies - that look too good to be refused.  I have since learned that they bake all of their stuff in-house, as part of a drive to generate better quality produce from top quality ingredients.  In fact, I reckon you should read this post on their blog about the steps they're taking to improve their environmental and ethical footprint.  I find it pretty inspiring. 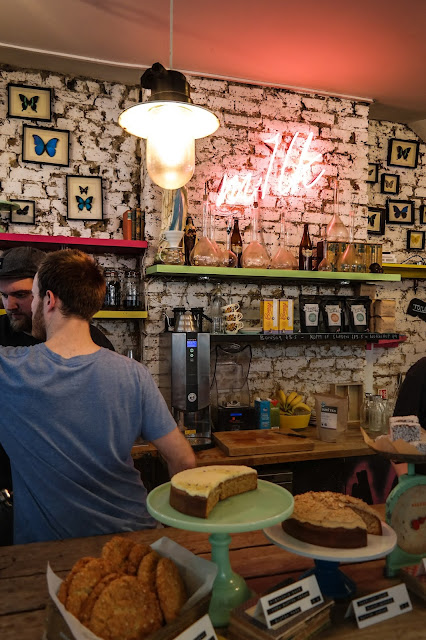 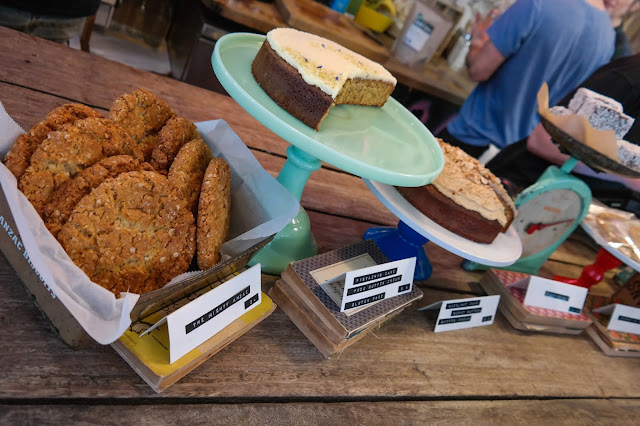 I have no problem recommending M1LK.  Sure, if you live locally and want to pop out for a bit of Saturday or Sunday brunch, being met by the enormous queues is likely to be frustrating.  But there's a reason for those queues: the product inside is, genuinely, really, really good.


PS: I took the photos a little while ago, and in my disorganised stage have only just got round to posting.  Since then, M1LK has been closed for a re-furb and has only just re-opened.  I gather it's now much bigger, which hopefully should address the queue situation a little, and I think some of the spots depicted (such as the counter and industrial-chic walls / neon display) have now gone.  However, I do understand that the food is just as good and the team hasn't changed, so I reckon this review should still stand.  Cheers.
Posted by Grubster Boy at 10:14