Back at school there was a rumour that if you snorted tequila you’d get much drunker much quicker but wouldn’t be sick and wouldn’t get a hangover.  I remember a guy called Ian trying it at a house party once with a bottle of Jose Cuervo, throwing up a lot shortly afterwards and looking decidedly ropey in the morning.  To be frank, I don’t think it was the nasally ingested liquor that did for Ian, I think it was more likely the Foster’s six pack from a local off licence and that he’d downed on an empty stomach as soon as he’d arrived and the half bottle of Lambrini he’d sunk over the next half hour with the girl he was trying to get off with.  But anyway, I digress – that was the first time I recall being (un)reliably informed that ingesting alcohol other than through your gob would have the desired, inebriating effect.

It was also, until very recently, the last – and that comes as no surprise.  However, a couple of weeks ago an email dropped into my inbox informing me that someone else was giving this concept a go.
Of course, it was the chaps behind Bompas & Parr – whose projects range from a jelly version of Heathrow Terminal 5 to a cityscape of lost London architecture made out of biscuits by way of a Parliamentary Waffle House and a glow-in-the dark Cornetto – that are spearheading this.

Their latest project is called Alcoholic Architecture.  I am not entirely sure how to describe it – other than a room full of gin. 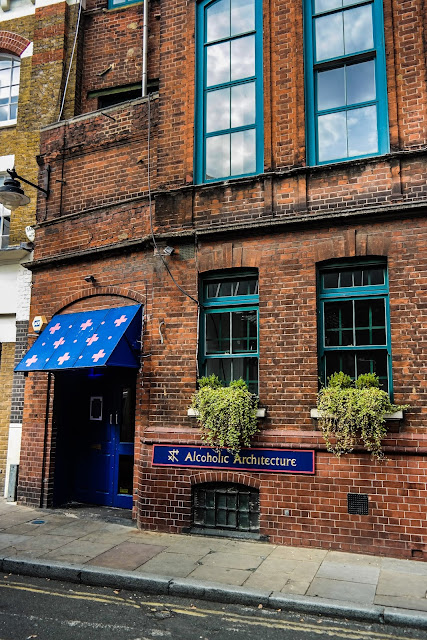 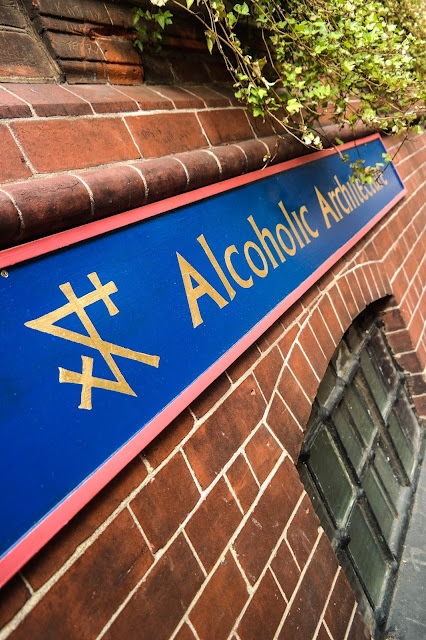 Alcoholic Architecture is based in the former Banana Store restaurant (and, indeed, store) near Borough Market.  Avid readers of this blog may recall it as the location of my stag party, oddly enough, which is alas no more.

Book your tickets (hurry to get the last few) and get there on time.  For health and sobriety reasons you are limited to an hour in the room (which actually works out as a lot less) so don’t be late. 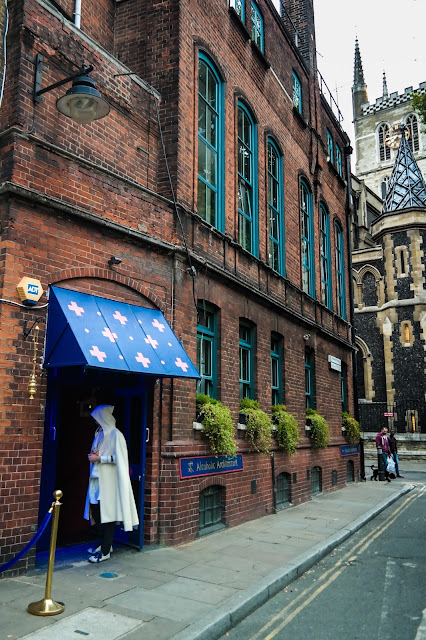 A funny monk shows you inside, and you work your way into the belly of the building, through spookily lit and gothic-ly decorated corridors. 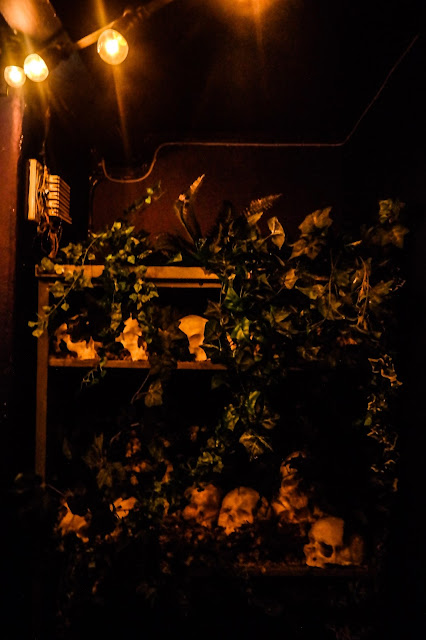 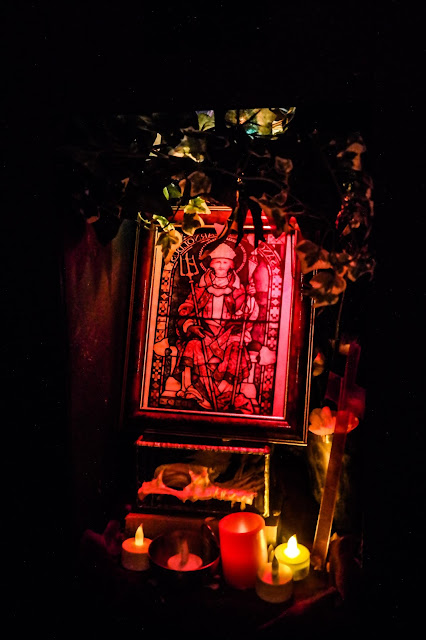 Soon you find yourself in the bar, having first donned a plastic mac.  Trust me, this is essential – you will get very damp otherwise. 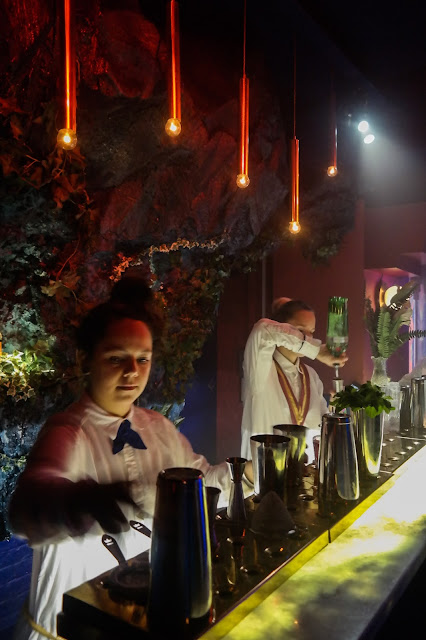 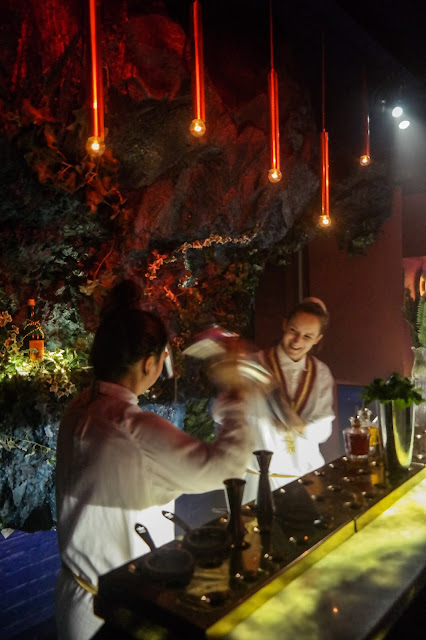 The drinks are rather predictably unpredictable.  I opted first for a Mystery Mead, a combination of mead (surprise surprise), antica formula, sweet vermouth, honey, lemon and rhubarb bitters.  Greg went for a gin and tonic, because he’s a little Tory like that – except here it’s made with frankincense-smoked gin (although it tasted, apparently, like a G&T). 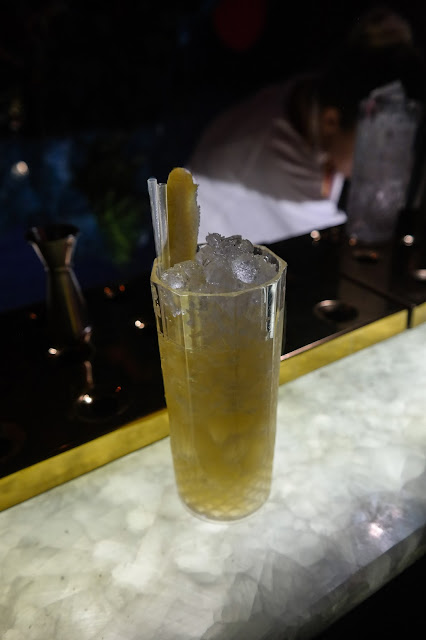 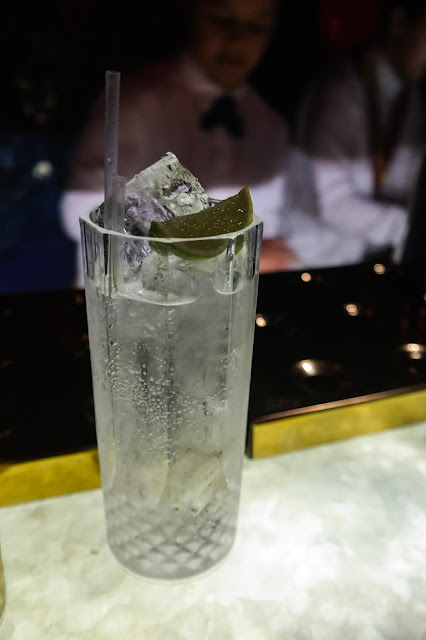 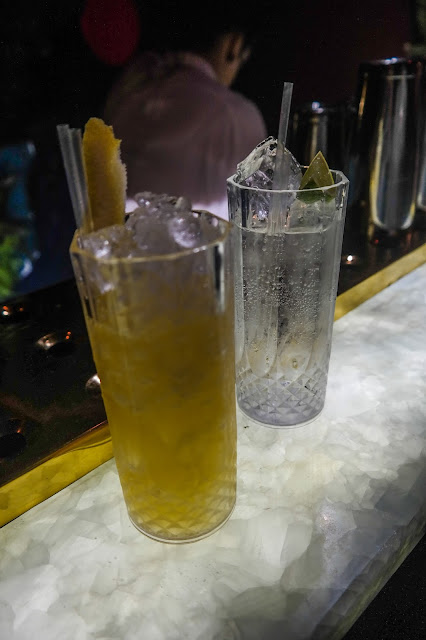 Then you make your way into ‘the room’ - or cloud as they would (quite justifiably) have it.  This is the main attraction of the night. 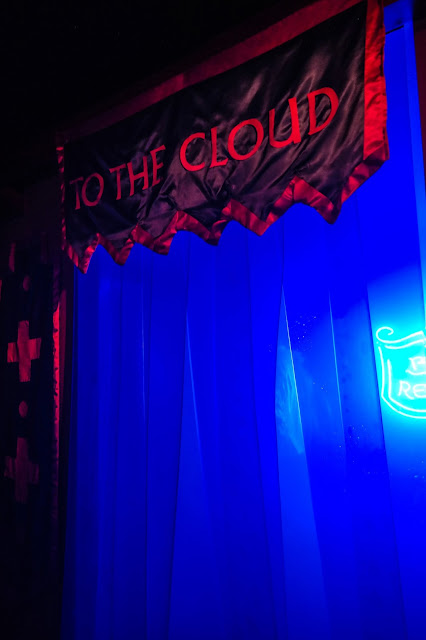 And cloudy it is. 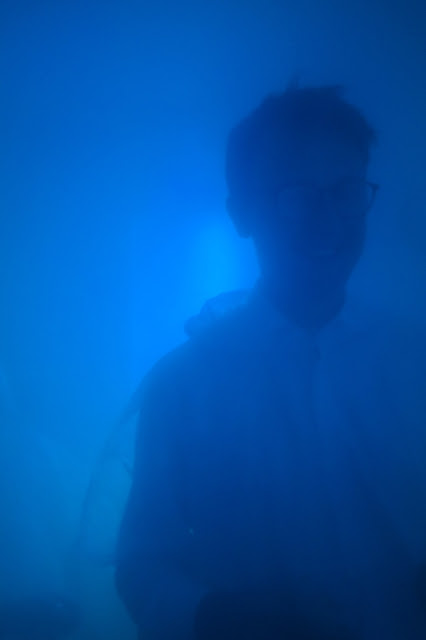 Basically, it is a room full of gin.  By which I mean literally full of gin and tonic – a G&T mist, to be precise, made from Beefeater gin, concentrated tonic and spring water.  It’s then turned magically into a thick fog and pumped, in enormous volumes, into a small room. 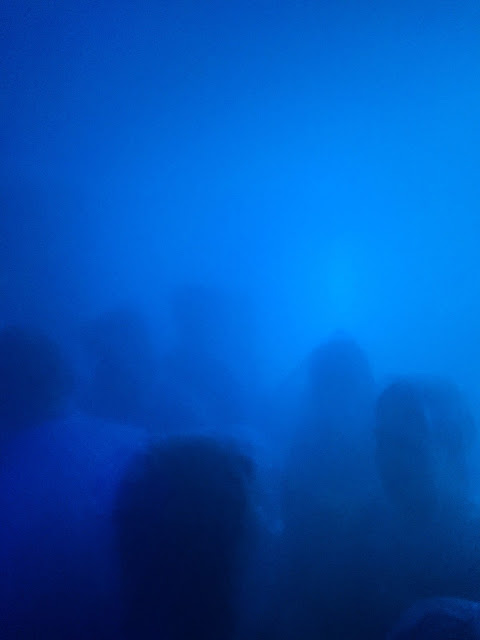 It’s incredibly thick.  It’s sort of what I imagine old the London smogs that people talked about were like.  The room is – actually, I have no real idea how big the room is.  There seemed to be a lot of people in there, but there was no way of judging how long it was from one end to another because you cannot see from one end to another.  The fog is so thick, in fact, that you struggle to make out the big light installations at the other end of the room – the light itself becoming obscured by the mix. 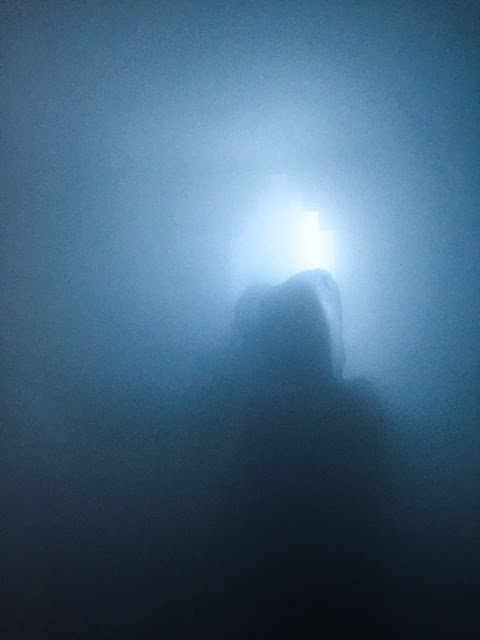 It’s a surreal experience.  No real concept of time or space or sound.  It’s pretty cool.

It’s also pretty damn tasty.  The idea is that you ingest the cocktail through your nose, mouth, lungs and – yes – the mucus coating of your eyeballs.  Your eyeballs.  This is eyeball-ingested booze.  But honestly, as you are there breathing it in you cannot avoid the taste.  It’s pretty tempting to start sucking it down, in fact, particularly once you get near the booze vent at the far end of the room. 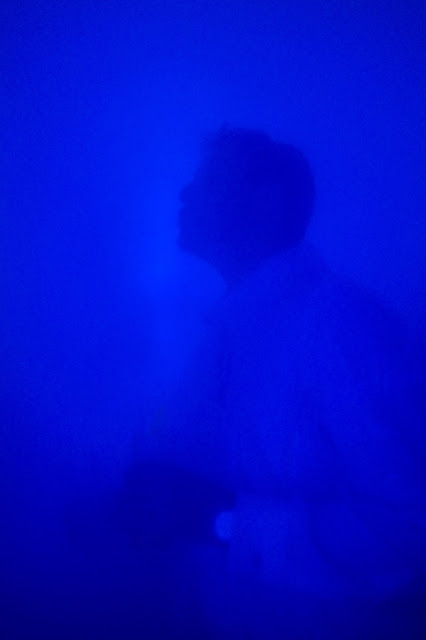 We also had other drinks over the course of the night.

I drank the Blasphemy to Nature – a cocktail of Buckfast (ahhh, Buckie – takes me straight back to Edinburgh University…), yellow chartreuse, lemon and egg white.  This was lovely – somehow strangely like a herbaceous, spiced old fashioned – but not really.  Very good.  Greg had the Monk-y Business, a sort of daiquiri made with Old Monk Rum that left it tasting very sweet – almost toffee-like. 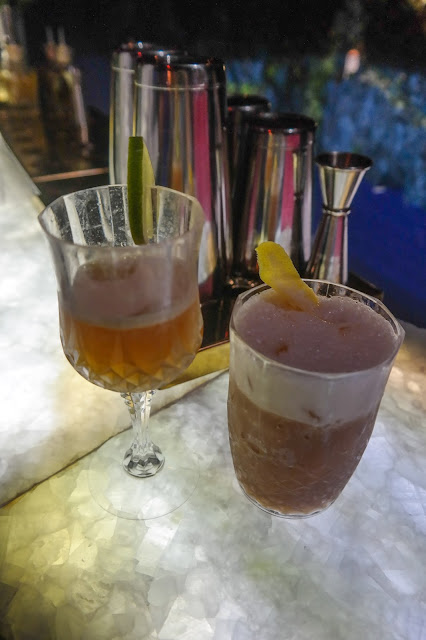 And, to finish off, a couple of shots.  Whilst Greg went for the whiskey based shots, mine was a mix of Campari and Frangelico – so bitter liqueur and hazelnuts, a superb (if innovative) combination. 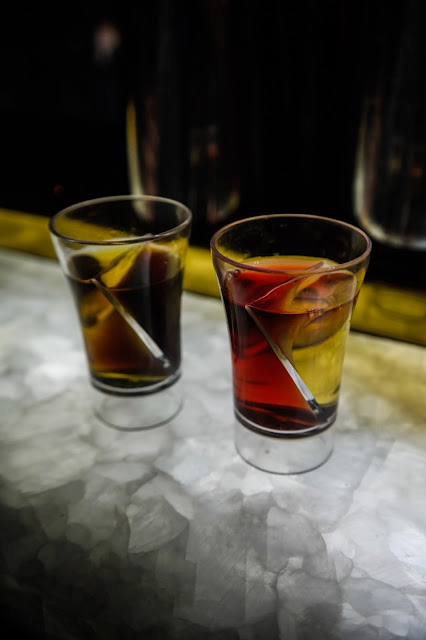 As a word of warning, you do not get the advertised hour – not even close – as you don’t get into the bar, let alone the fog room, until about ten / fifteen minutes after the hour you’ve booked, and the call for last orders in about twenty minutes before the end of the booking – and you’re bundled our pretty sharpish after that, so in all it’s about 40 minutes.  Still, I’m not sure you need much longer that, to be honest.  And, crucially, it’s a great, fun and different thing to do.  Genuine innovation in an age of ubiquitous bars performing the same tricks to the same tunes.  Well done, chaps. ﻿ 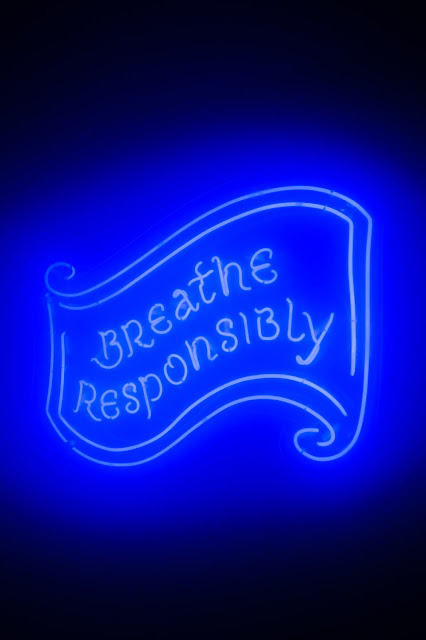 I would definitely recommend giving this one a try.  Just remember to do as the sign says...