Rex & Mariano comes from some relatively serious commercial restaurant pedigree.  The business behind this is the same as that which opened the Goodman steak houses and Burger & Lobster, both of which seem to be chugging along in fine fettle, with a string of decent reviews and an ocean of devotees flowing in their respective wakes.  The place is also named for Rex Goldsmith, a doyenne of the Chelsea fishmonger world, and Mariano li Vigni, who... well, I’m not really sure, but he’s from Sicily and knows a thing or two about fish.

Its atmosphere is classic modern fish spot, albeit slightly quiet when we went (a Friday lunchtime).  Loads and loads of space, with all the shiny marble-ness of an Italian restaurant mixed with the industrial chic of bare wire light fittings and open ventilation ducts throughout.  A sort of clash of cultures.  It feels nice, though, don’t get me wrong – a sort of relaxed, informal way of eating food that is often overly formal.

But the very first thing you notice is your waiter.  Because this is him. 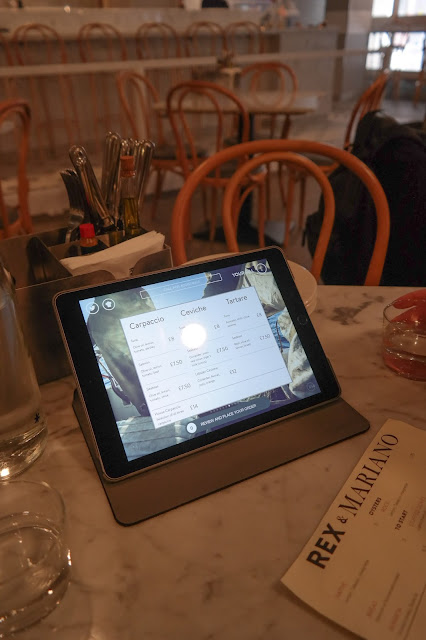 Yup, an iPad.  For the most part, the waiting is automated, which is designed to cut down on the number of staff and thereby decrease the cost of the food.  On that front, it works – the prices of the dishes are indeed less than I would have anticipated, but then this is from the people who brought us £20 grilled lobsters and were able to employ human waiters.  I’m sceptical about this, partly because it means fewer jobs and partly because it undermines the almost entirely lost art of waiting tables – something which, when done properly and done well, is a joy to experience.

But, you can’t get away from one simple fact: It’s pretty cool to watch it in action.  For example, we tapped away at our screen and ordered a brace of Aperol Spritz.  Mere seconds (no exaggeration) later, this happened. 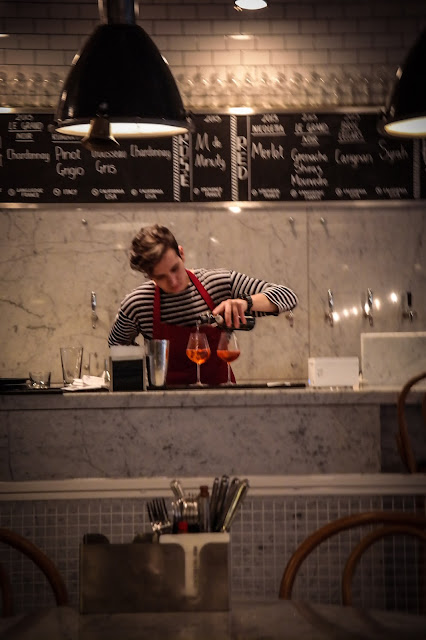 And a few seconds after that, our drinks arrived. 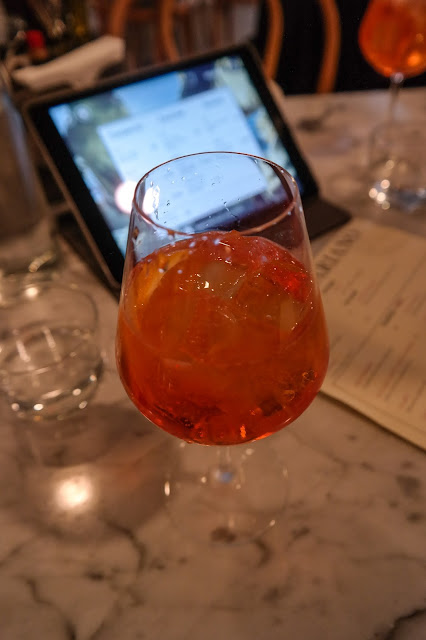 So no more waiting around, no more mucking about.  This is an end to that irritating scenario where the table next to you arrives afterwards but orders first, or where you have to wait ages whilst the table of twenty five out on a team lunch have their mammoth order prepared and served.  At R&M they are swift, they are keen, the automation simply slots your order in a queue and it arrives as soon as it’s ready.

So here it is, in the order in which it came (which is the only way their food is served). 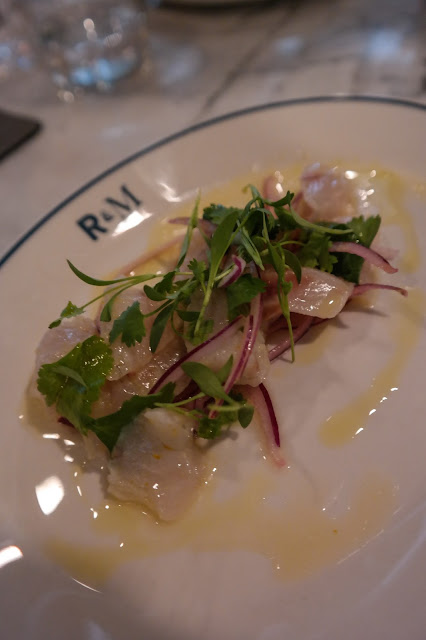 Slices of fresh-as-a-daisy sea bass marinated in coriander, yuzu (a Japanese citrus fruit somewhere between a lemon, a lime and a grapefruit), red onion and tiger’s milk (not actually – leche de tigre is the Peruvian name for the juice that marinades and is created by the process of ceviche – it’s basically lime juice, chilli, onion and salt).

GrubsterGirl also had some oysters (I’m a bit of an oyster pansy, I’m afraid) – two of each of the rocks and the natives.  I was informed that they were very good value. 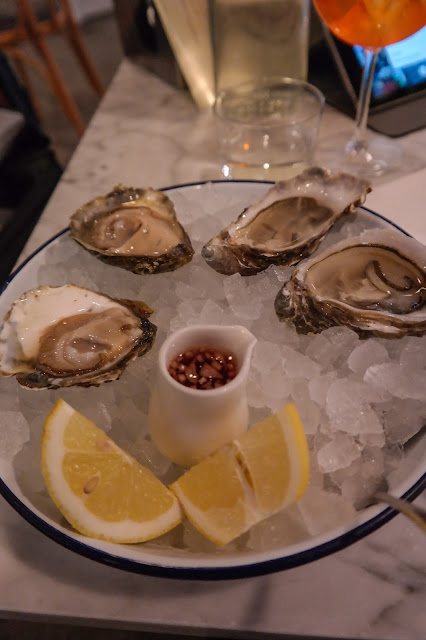 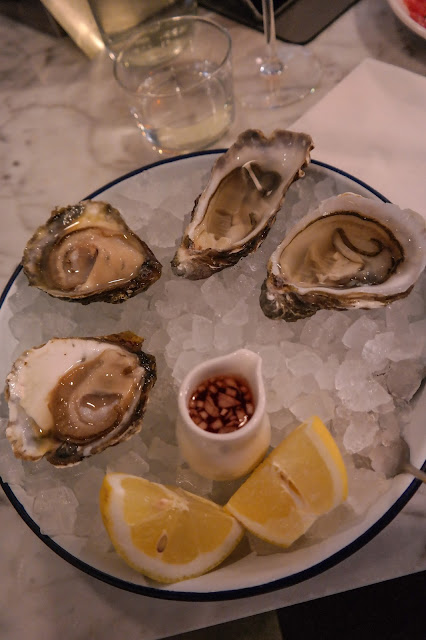 A bowl of courgette fries. 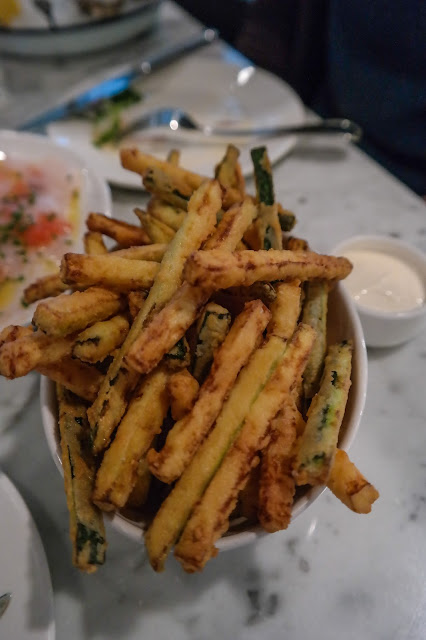 These were really, really good – much better than I was expecting, and blowing Byron’s much better known (and the original?) version out of the water.  They were piping hot, encased in a light batter that somehow stayed crunchy even once the fries had cooled. 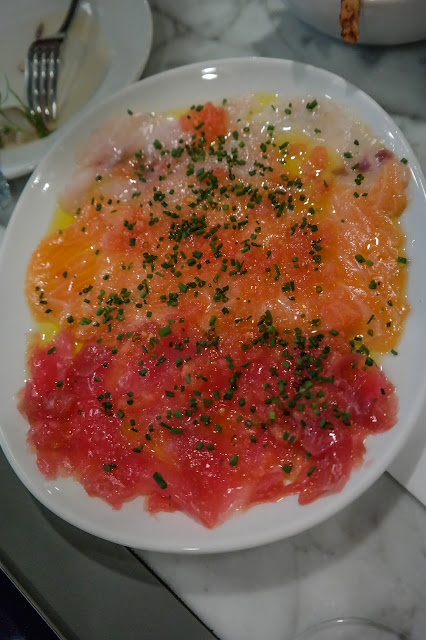 From top to bottom: sea bass, salmon and tuna.  Let’s just pause a moment to note that, in order to do this dish, you have to have spankingly fresh fish.  Which they have.  In central London.  That’s one of my take home points about this place – their seafood is genuinely very good.

If I want to be picky / fussy, these were the three fish that dominated the menu.  But I like them so I simply don’t care.  Also, the fish had some funny tomato stuff on it which simply didn’t work.  But other than that, good dish.

Then there is the lobster ceviche. 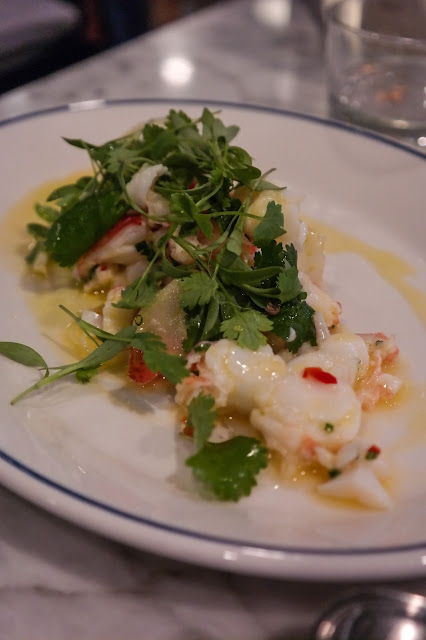 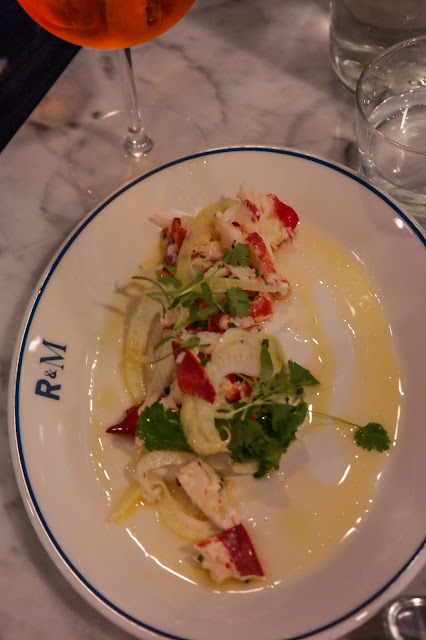 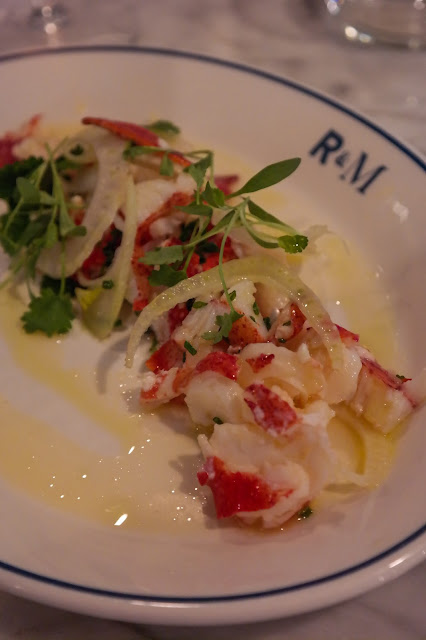 Yup.  This was actually so good, we ordered it twice.  Just stunning, the balance of flavours was perfect that the ceviche process had ‘cooked’ the lobster meat to absolute perfection.  The fennel worked so unbelievably well with it, I was genuinely taken aback.  Ten out of ten for this one.

We skipped pudding – the list looked a bit meagre, a bit of an afterthought, which was a shame.  But of course (this being an Italian restaurant in London) there was the classic complimentary shot of limoncello at the end. 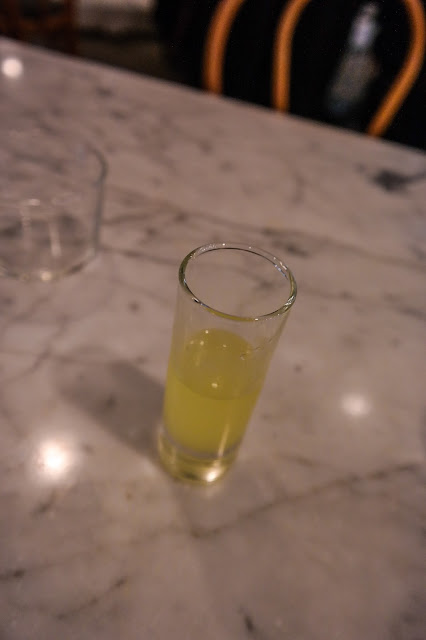 Rex & Mariano is a great concept, selling food well and at decent prices.  It’s still not cheap though – not in the same draw-dropping way that Burger & Lobster seems able to pull off its crustaceans – but more what I’d call good value.  And the quality of the food, simple as it is, was magnificent.  There are chains you see sprouting up all of the time, and in most cases I feel a bit ‘take it or leave it’.  But not in this case.  I’d like R&M to go all the way, please.
Posted by Grubster Boy at 10:13