The Bonnie Gull Seafood Shack, situated in Fitzrovia, has been a staple for may seafood loving-Londoners for the last couple of years, since converting its Hackney pop-up into a full-blown restaurant in 2012.  In that time it's built itself a thoroughly decent – and well deserved - reputation for top-notch seafood, whether of the kind that swims, scurries or just hangs about on the seafloor.  So when it was announced that it would be opening a second branch – The Bonnie Gull Seafood Cafe I was quick to book a table.
The idea of the place is to transport you to the coast – perhaps Cornwall, or Devon, or some other spot on the South Coast.  For me, it took me straight back to family day trips to Cooden Beach in East Sussex, where we used to spend so many days of summer, but I imagine that all patrons will get some whiff of the sea, some twinge of nostalgia for sunny days on the beach and fish suppers wrapped in newspaper.
The real star of the show, however, is the food.  Which is precisely what you'd want – and expect.
We started with a round of oysters.  The Bonnie Gull offers a great selection to choose from.  When we visited there were five varieties to choose from, although it's all dependent on supplies and freshness – the one thing you will be absolutely convinced of is the freshness of the food.  In fact, this might be a good time to mention that, although I'm going to show you what we ate, the chances of you seeing all (or, indeed, any) of these dishes should you visit is pretty low.  There are some staples that seem to be on the menu regularly, but the menu is absolutely dictated by what's freshly available.  So it will change - often daily, it seems.  This, in my opinion, is a very good thing.
We had the whole oyster range – not to be outdone – including Carlingford Rocks (GrubsterGirl's favourite) and Portland Pearls (my mollusc of choice).  And fantastic they were. 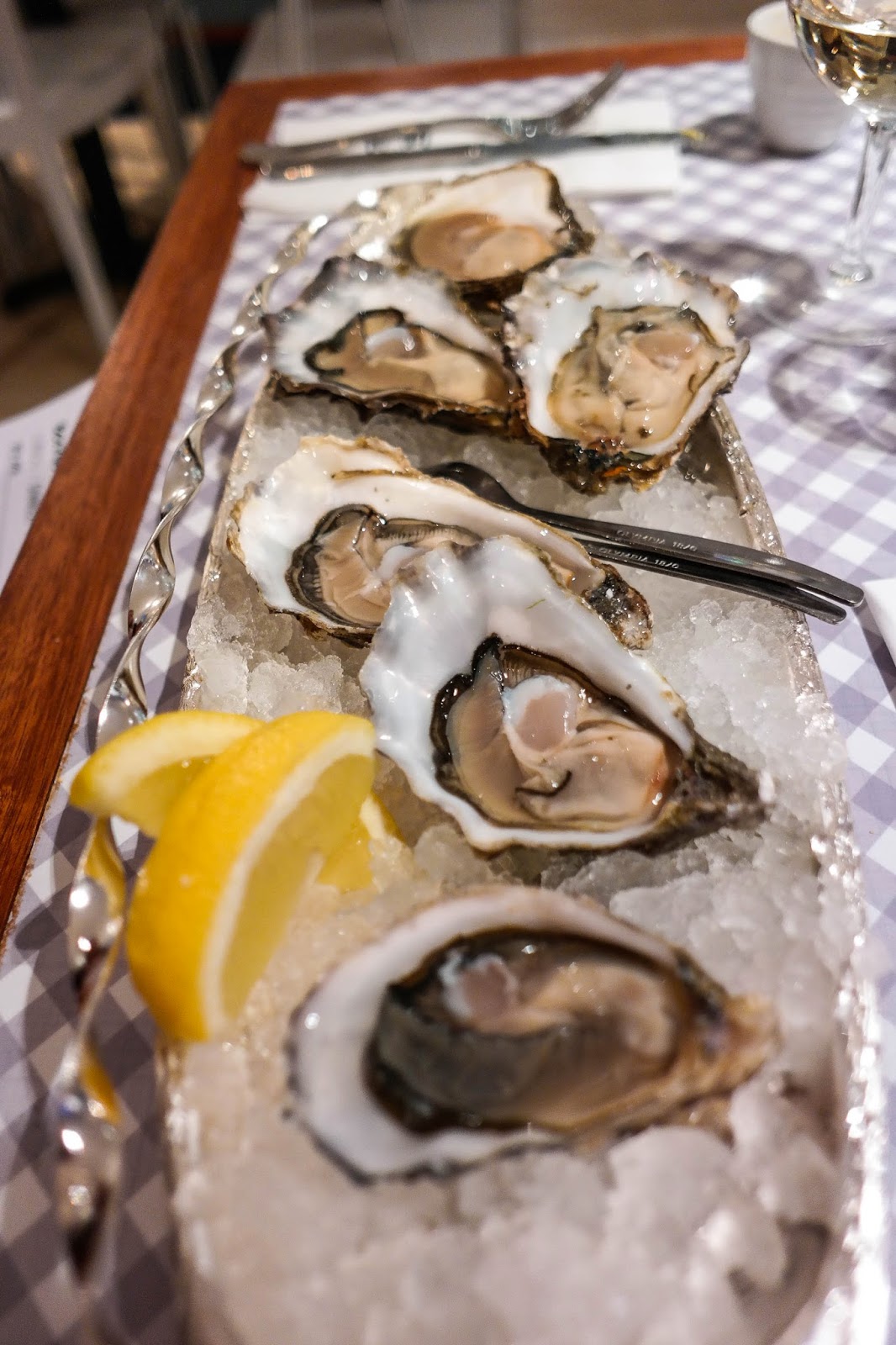 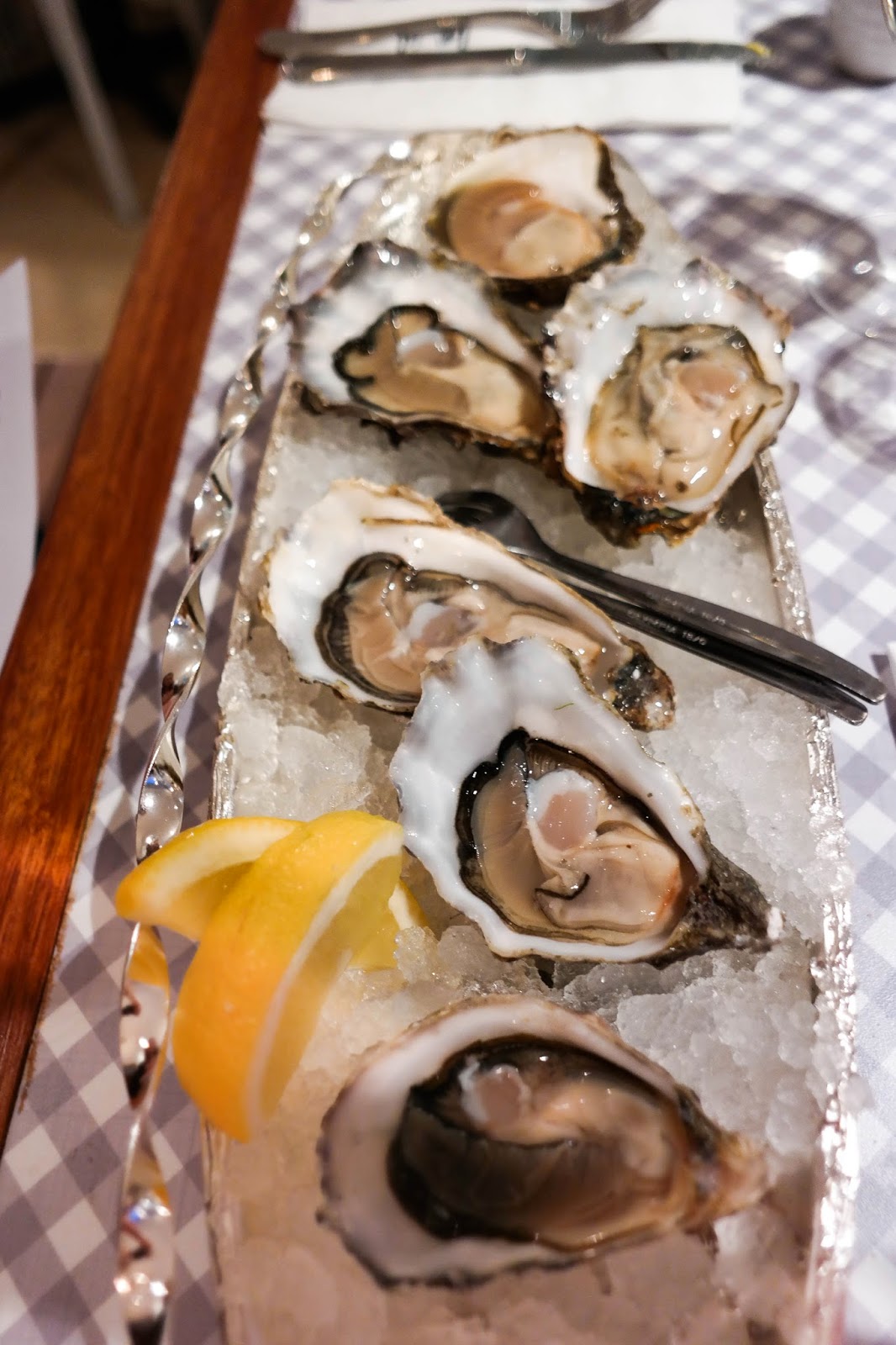 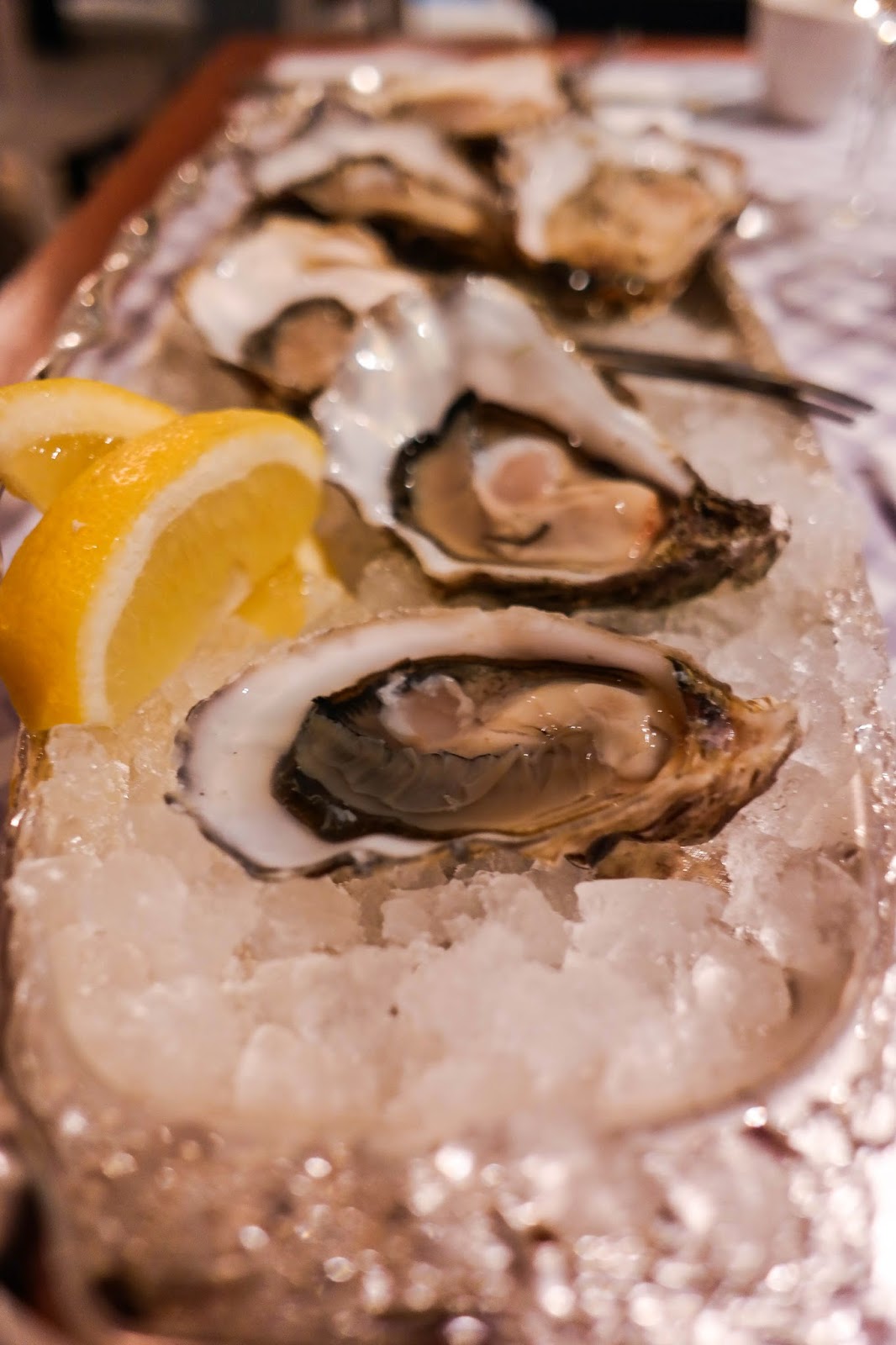 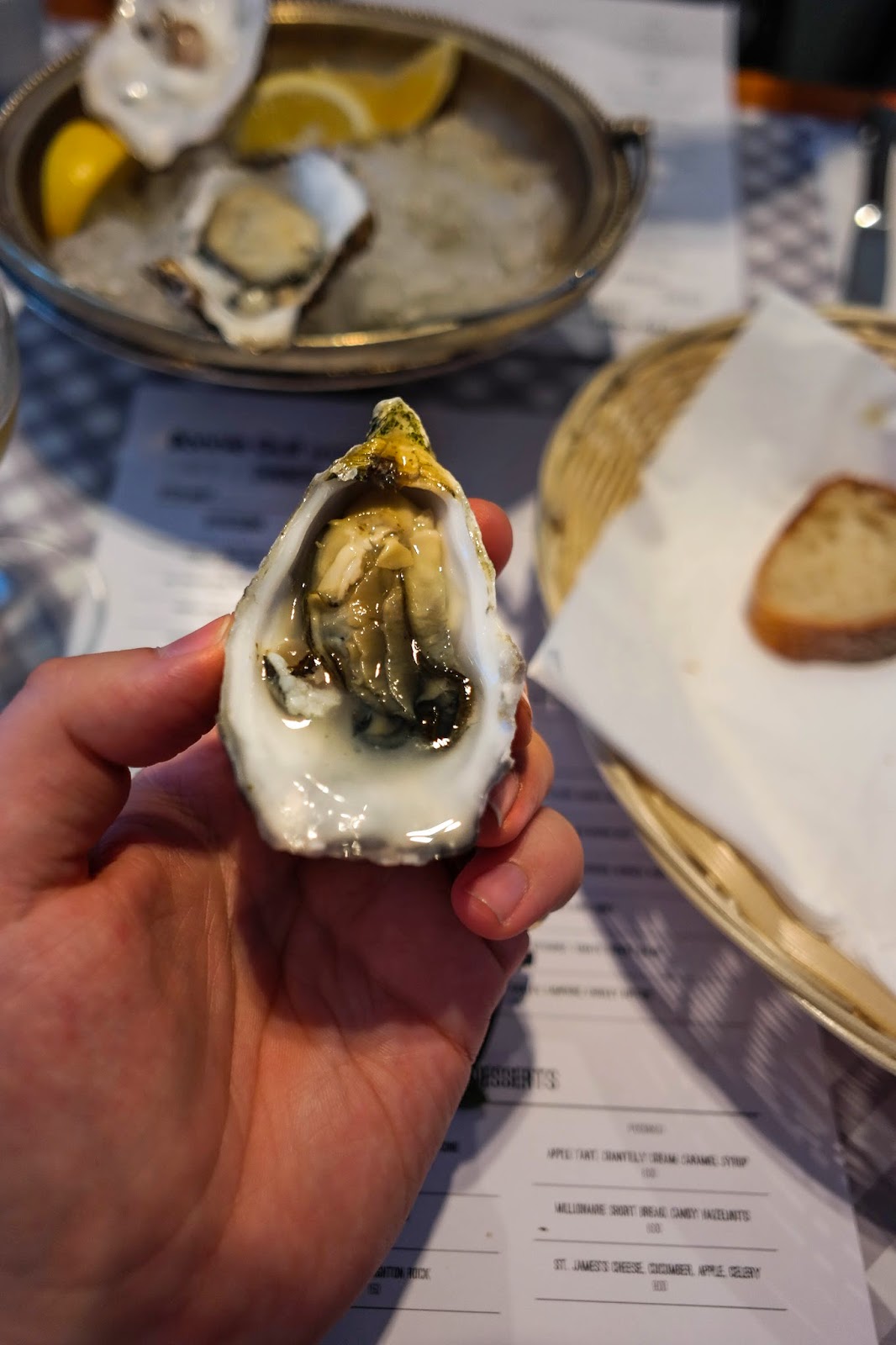 One of the main attractions, for me, to The Bonnie Gull is the selection of shellfish.  I absolutely adore food that comes in a shell – especially wriggling, crustacean types – crab, lobster, prawns, brown shrimp, crawfish, langoustine – you name it, if it crawls and swims, I'm probably going to love it.  The Bonnie Gull serves all of these in spades.

We then moved on to more substantial starters.

Crab on beef-dripping toast, with avocado. I love crab meat (seriously love it, it's quite possibly my favourite food) so had to try this - even if my main was a little crabby (as you'll see in a bit...).  Absolutely fantastic – a beautiful ratio of brown and white meat which was complimented terrifically by the avocado. 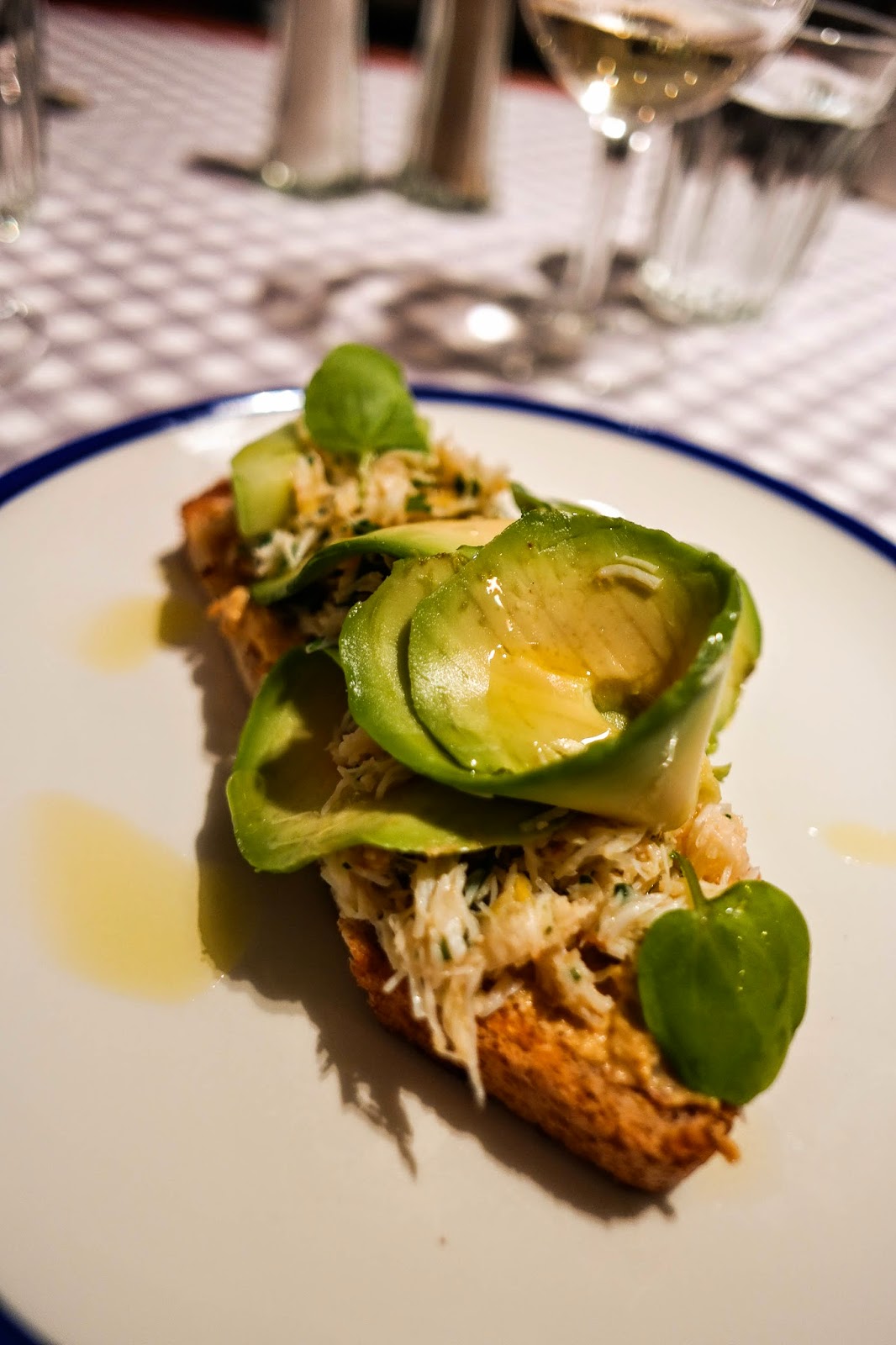 Paprika-battered queenies. If you don’t know what a 'queenie' is, it's basically like a baby scallop – although fully grown – that are best known for coming from the waters around the Isle of Man.  (Writing this post I have discovered that there's an annual queenie festival in the Isle of Man at the end of June each year – there's a date for future diaries.)  This was another hit of a dish – great fun, tasted fantastic and seemed to go on forever and ever, without leaving you feeling stuffed – just what one wants in a starter. 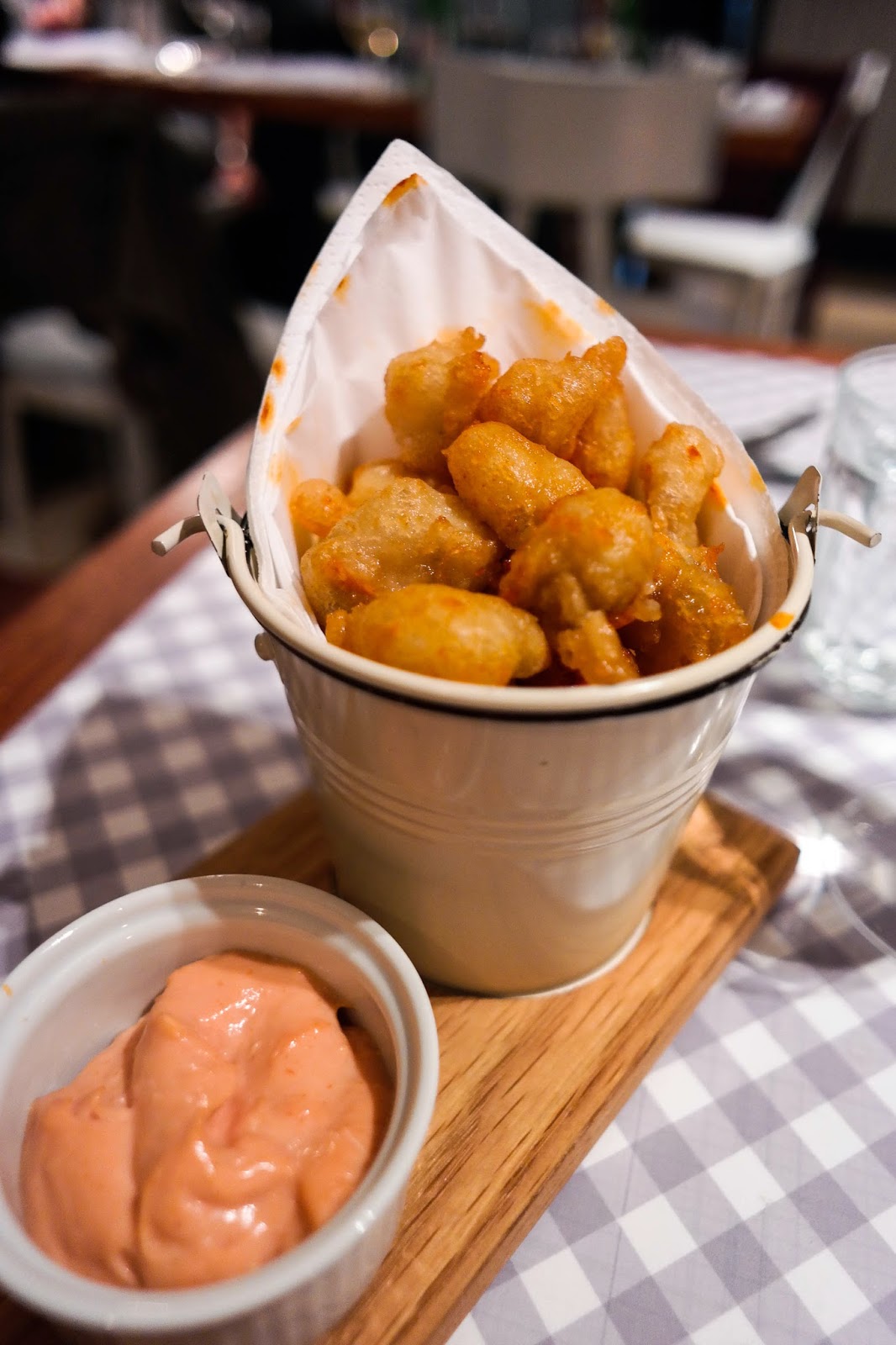 Meanwhile, I tucked in to cockles cooked in cider and pancetta.  This was actual an accidental order – I was so busy chatting to my dining companions that I misread cockles for clams, so was slightly taken aback when these arrived.  Still, the two are not so terribly different (someone, somewhere, will probably want to kill me for saying that) and besides what I got was lipsmackingly fabulous that I can't – and shan't – complain. 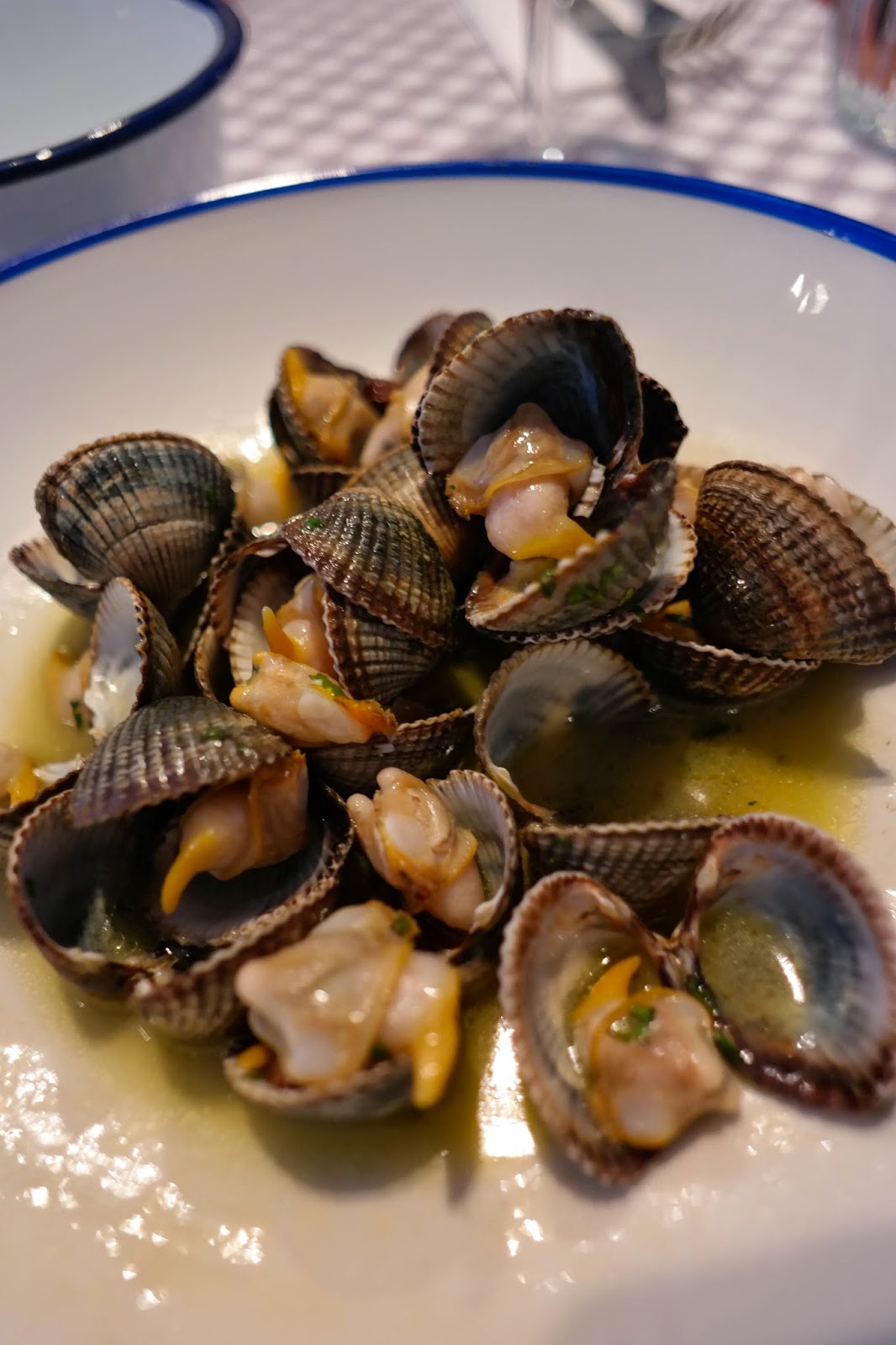 In fact, they disappeared remarkably quickly... 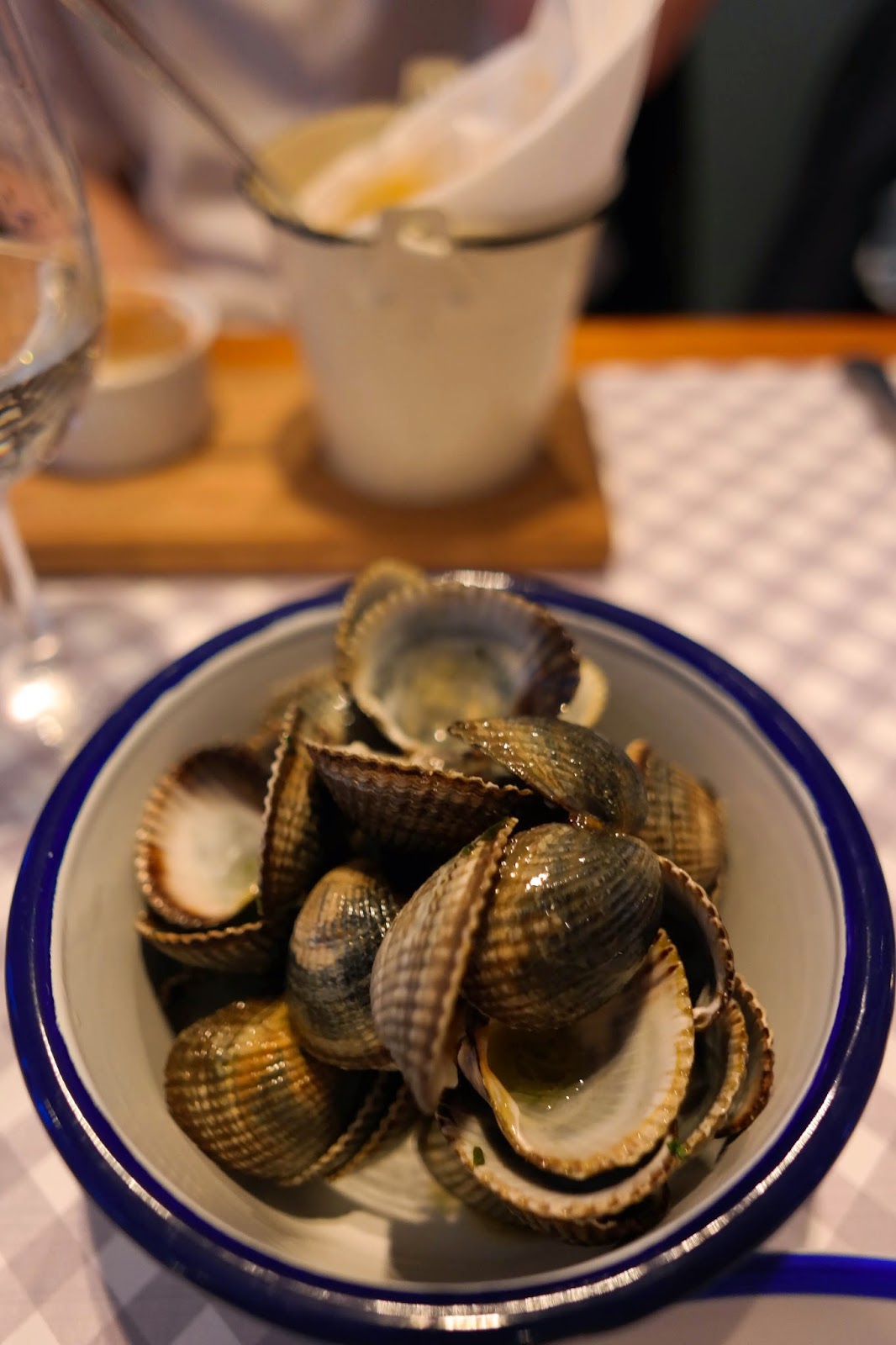 One of my companions also had the hot smoked salmon with horseradish cream and beetroot.  Sadly I didn't try this (there's only so much one can eat) but I heard that it was a 100% hit.  And doesn't it just look it?  I can well imagine that if you visit with someone who doesn't like seafood that much - and there are people who genuinely don't - this could be a good place to start at. 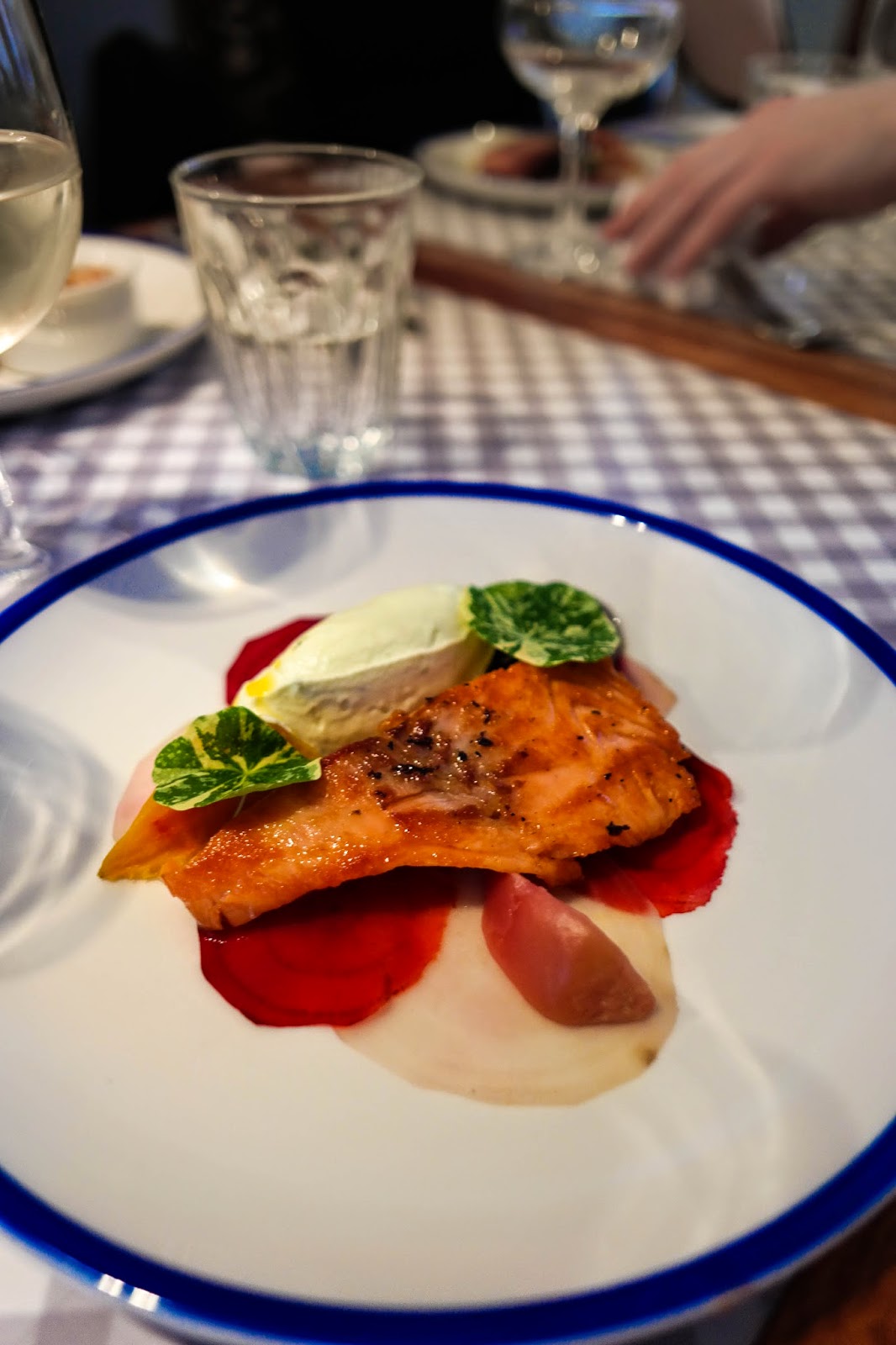 Also, potted brown shrimp on sourdough toast.  An absolutely staple, but beautifully done and served warm - which, as I have written before - really brings all the flavour out. 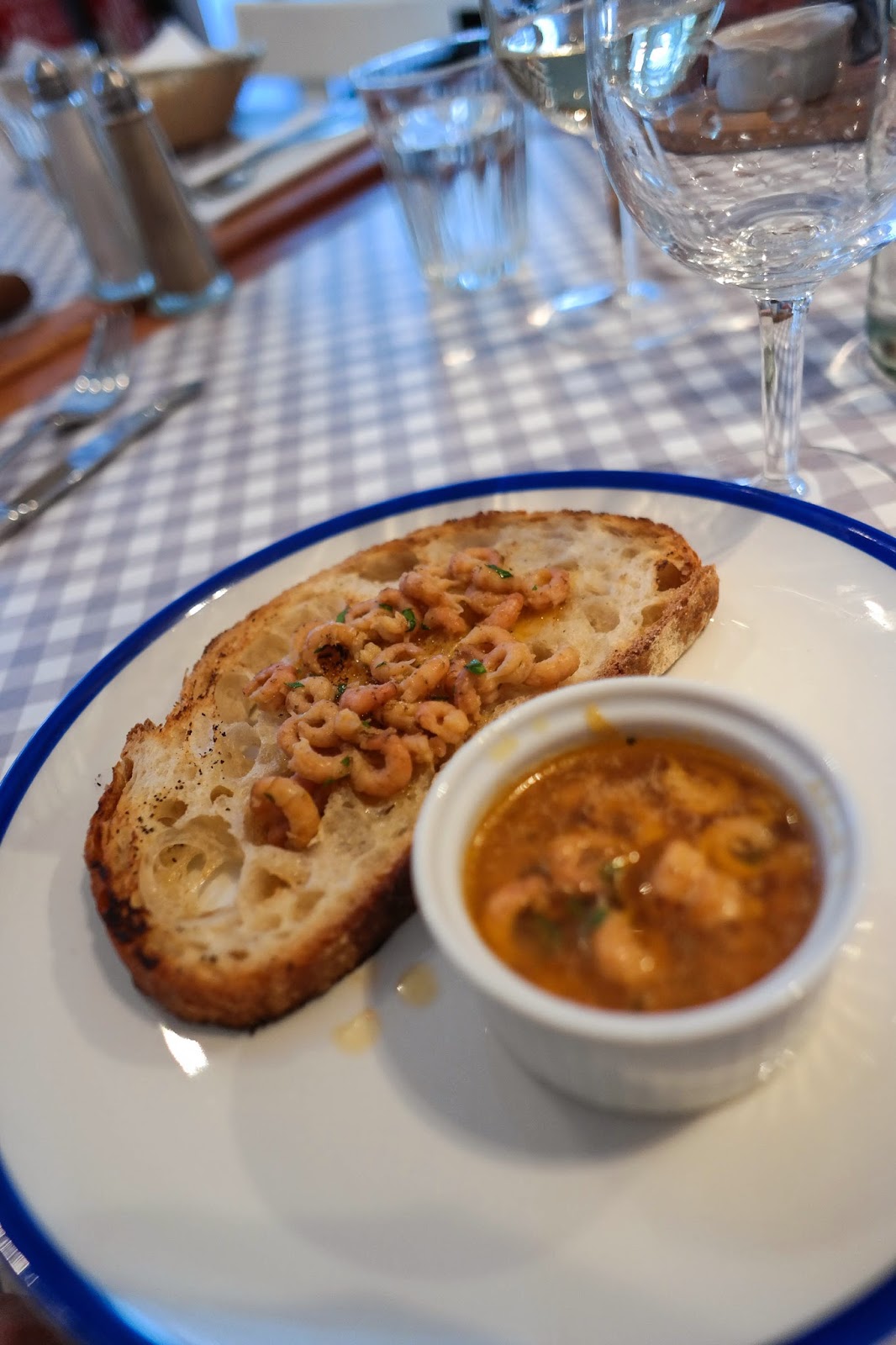 Moving on to the mains then...

I have to confess that I was a bit of a bad food blogger when it came to the mains.  You see, the main I had was a bit hands on, and was also my favourite thing, so I have to admit that I was a little bit distracted.  OK, I was a lot distracted.  I snapped a few of my friends' mains – including this delicious lobster roll... 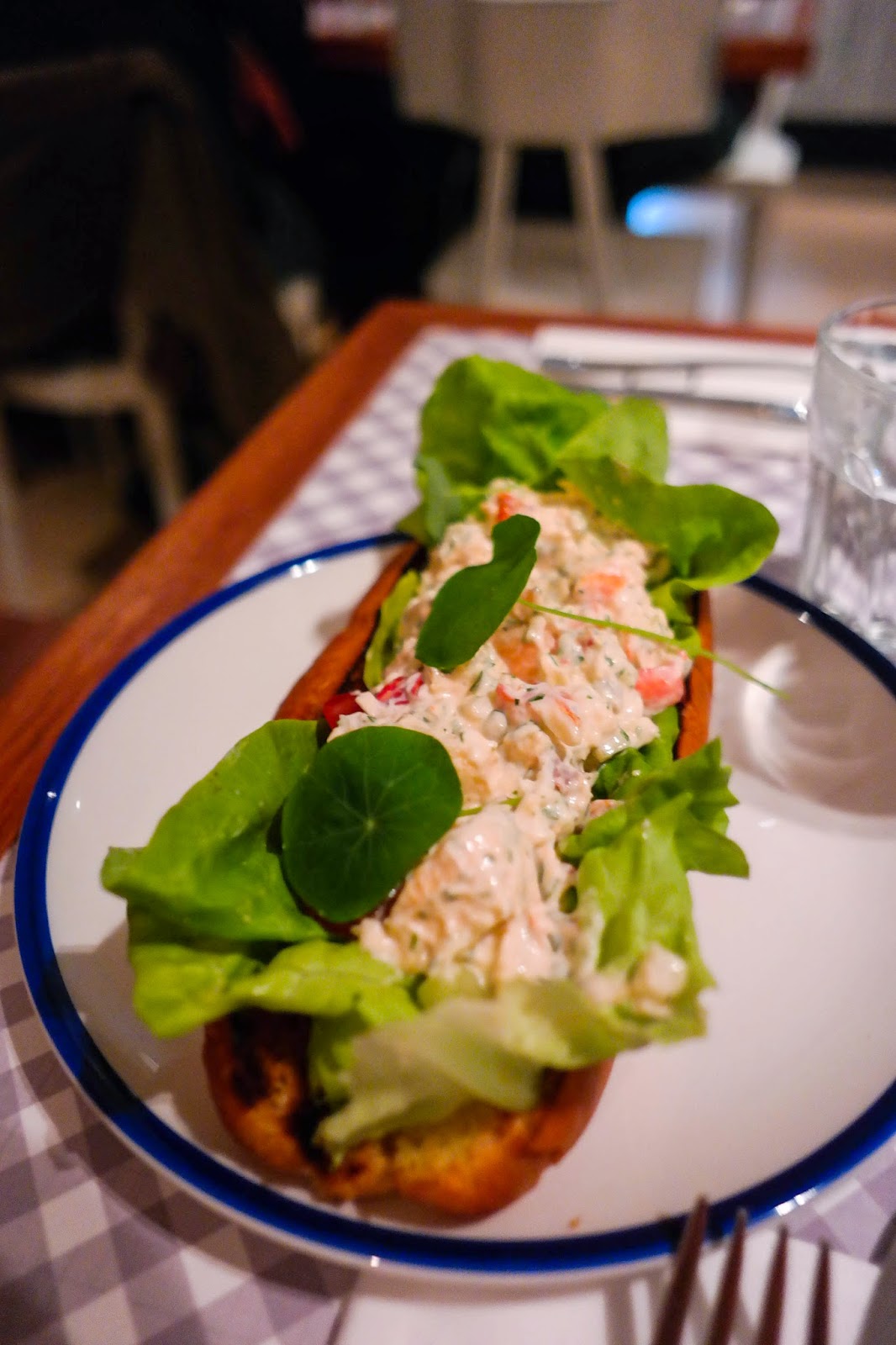 A proper, hearty, filling serving of the king of crustaceans, in a lovely, charred brioche bun and decorated with nasturtium flower leaves (which are clearly becoming all the rage). 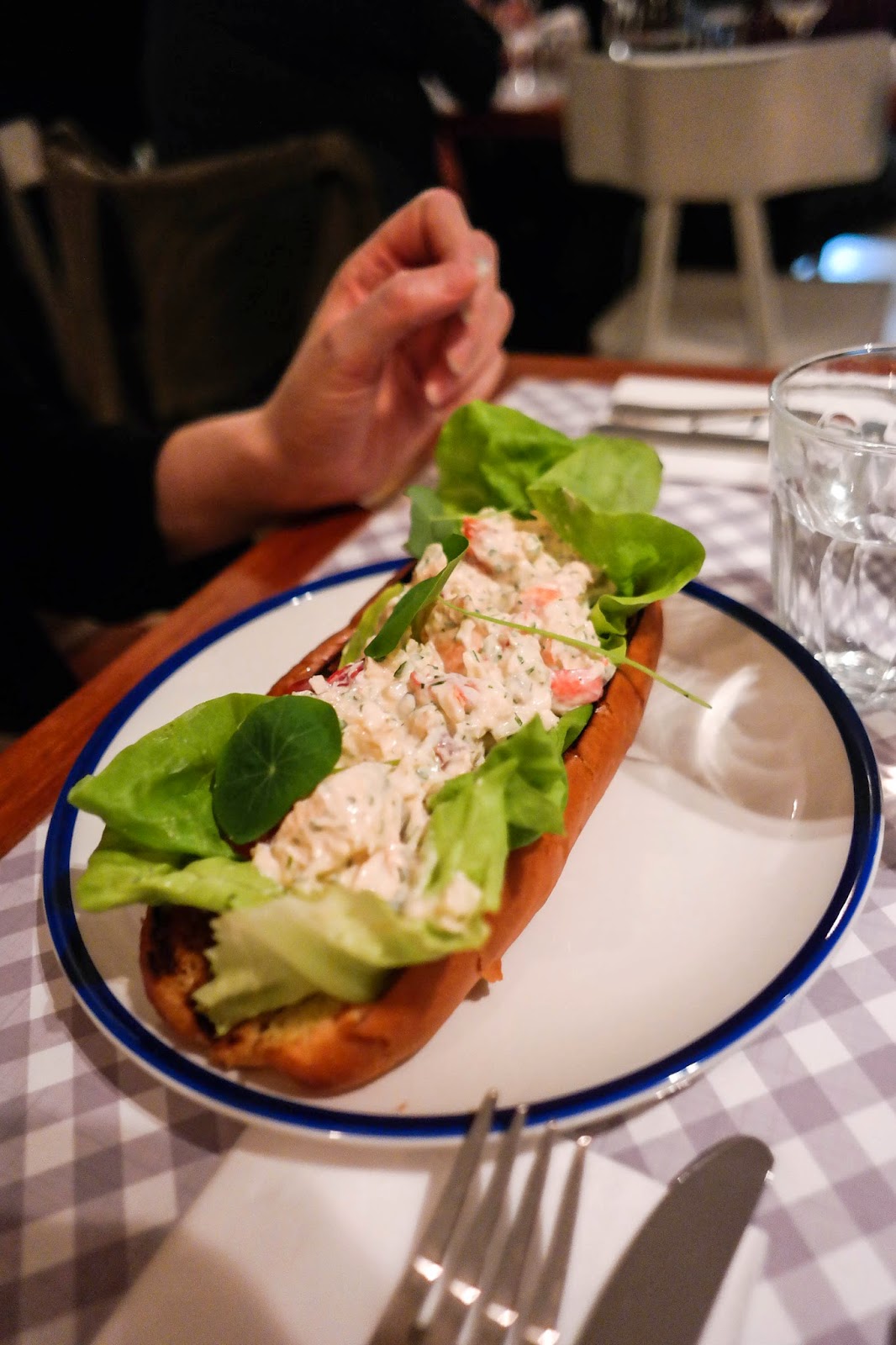 There was also this fantastic crockpot of Devon seafood – mixed fish and shells (haddock, cod, clams and mussels I remember, other things I sadly forget) cooked in a rich bouillabaisse Provençal sauce – was simply stunning. 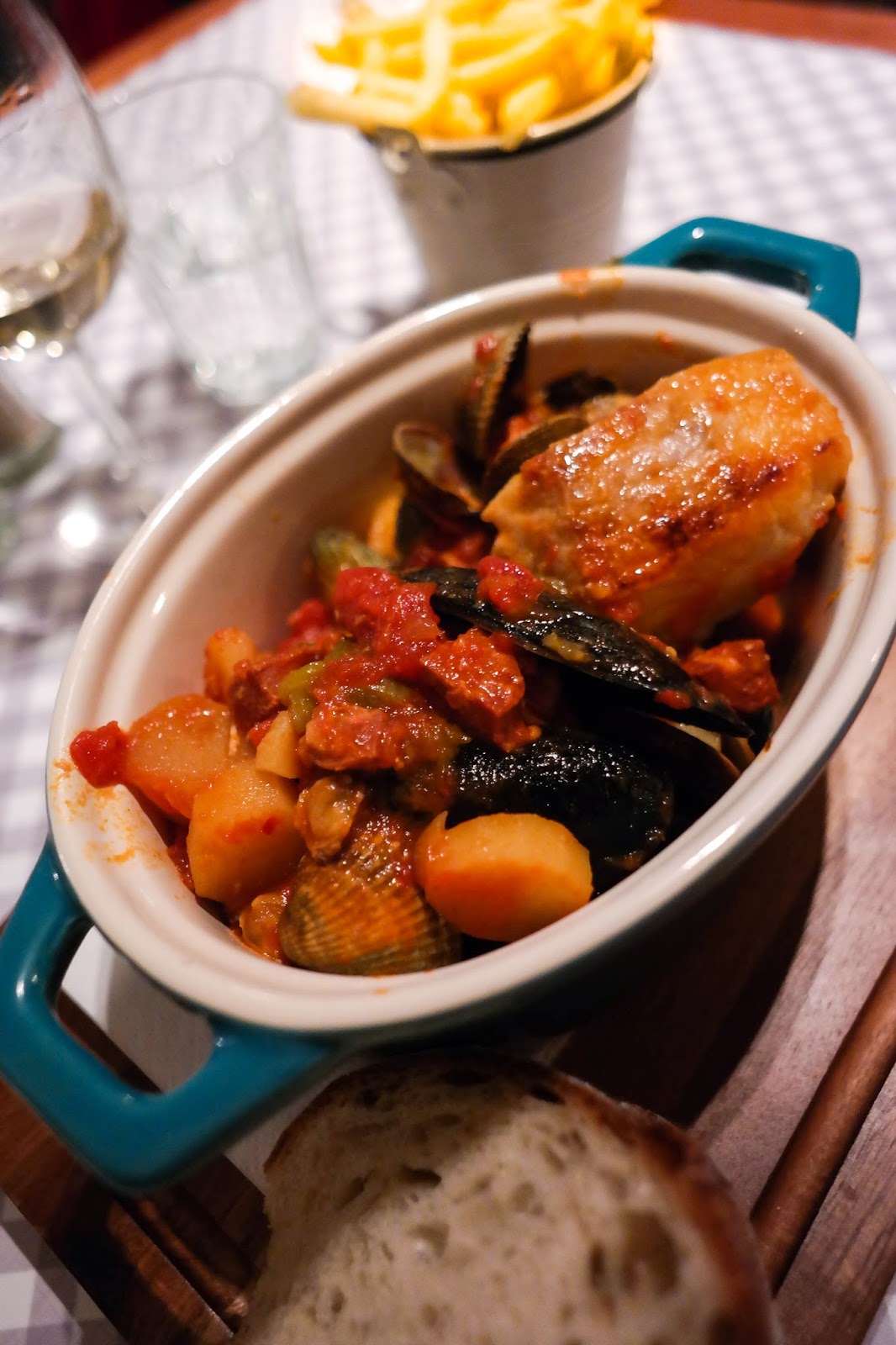 But the standout attraction, the piece de resistance, was the crab.

Described on the menu in playful terms as 'smash your own crab', along it came, ready to play with (please note: I went for the 'lightly pre-smashed' option, which I strongly recommend for anyone not eager to (a) cover themselves in crab gunk; and (b) take out their companion's eye with faster-than-light flying shell shards).  The head meat had also been helpfully picked and flame-grilled, allowing for easy eating, as well as avoiding the toxic crab gills.  Although many people dodge the brown meat, smear a little on toast with some mayonnaise and a healthy helping of white meat, all drizzled with lemon squeeze, and enjoy for a slice of pure heaven. 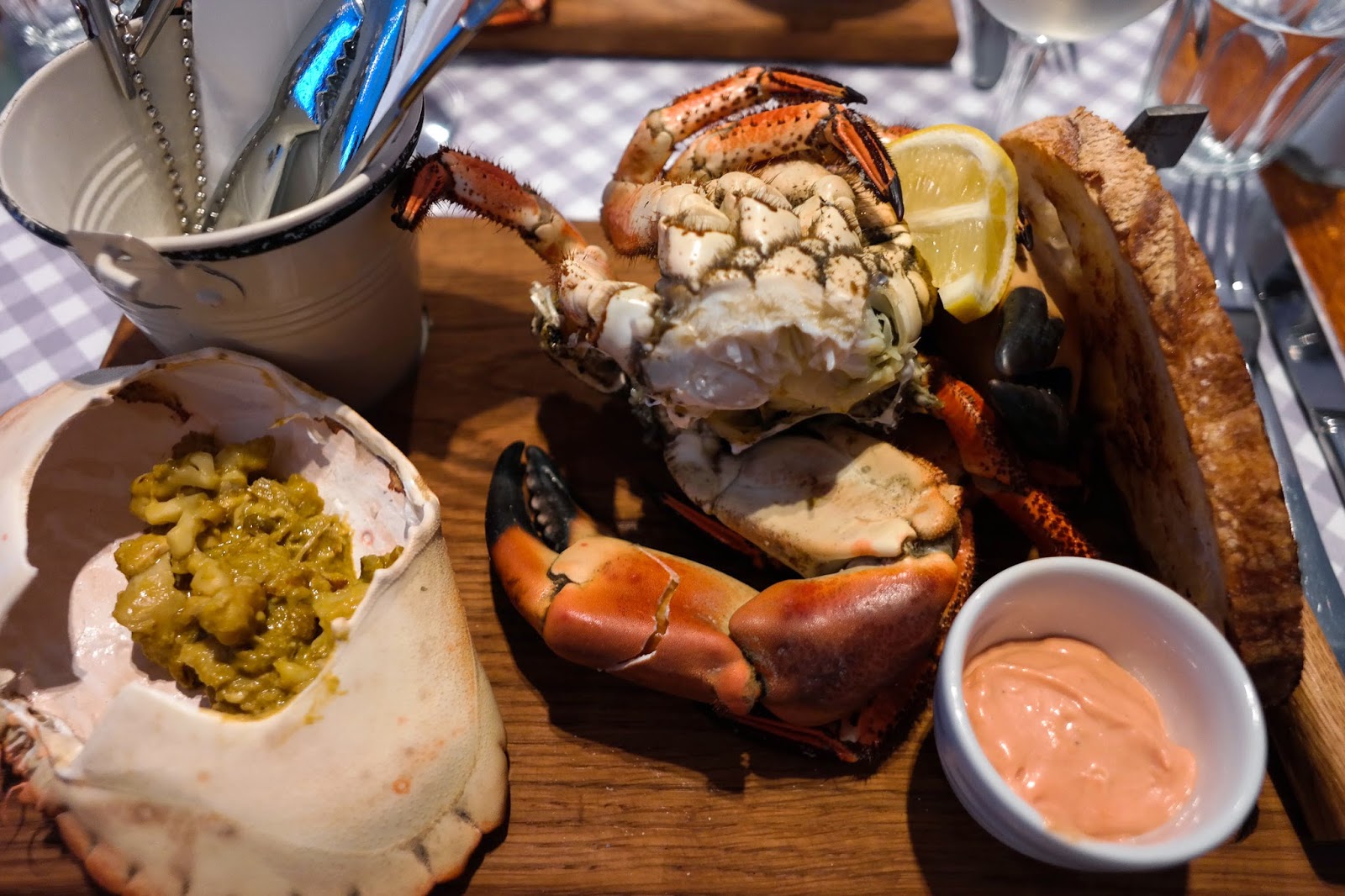 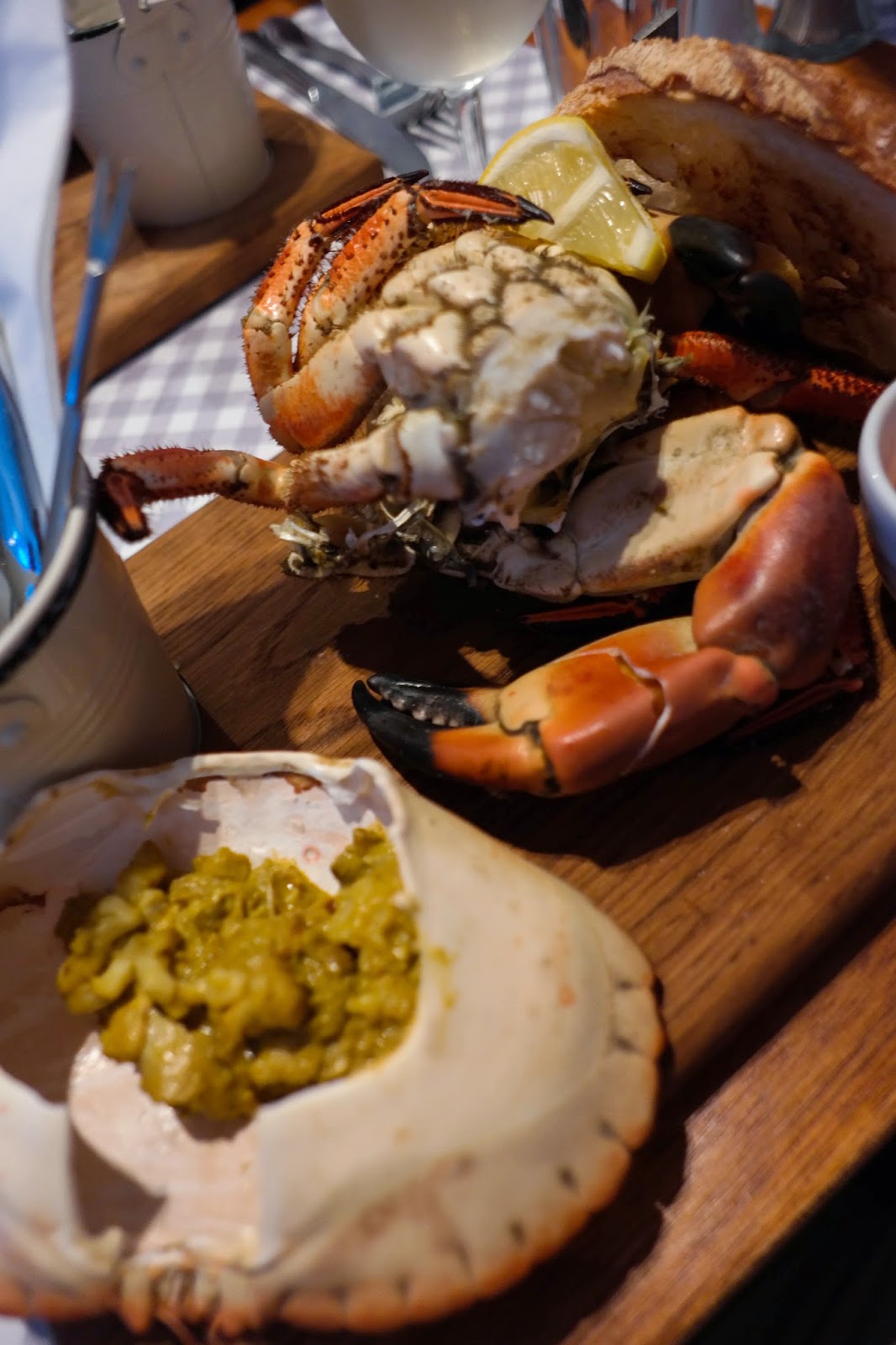 It even came with a little hammer to aid the smashing process. 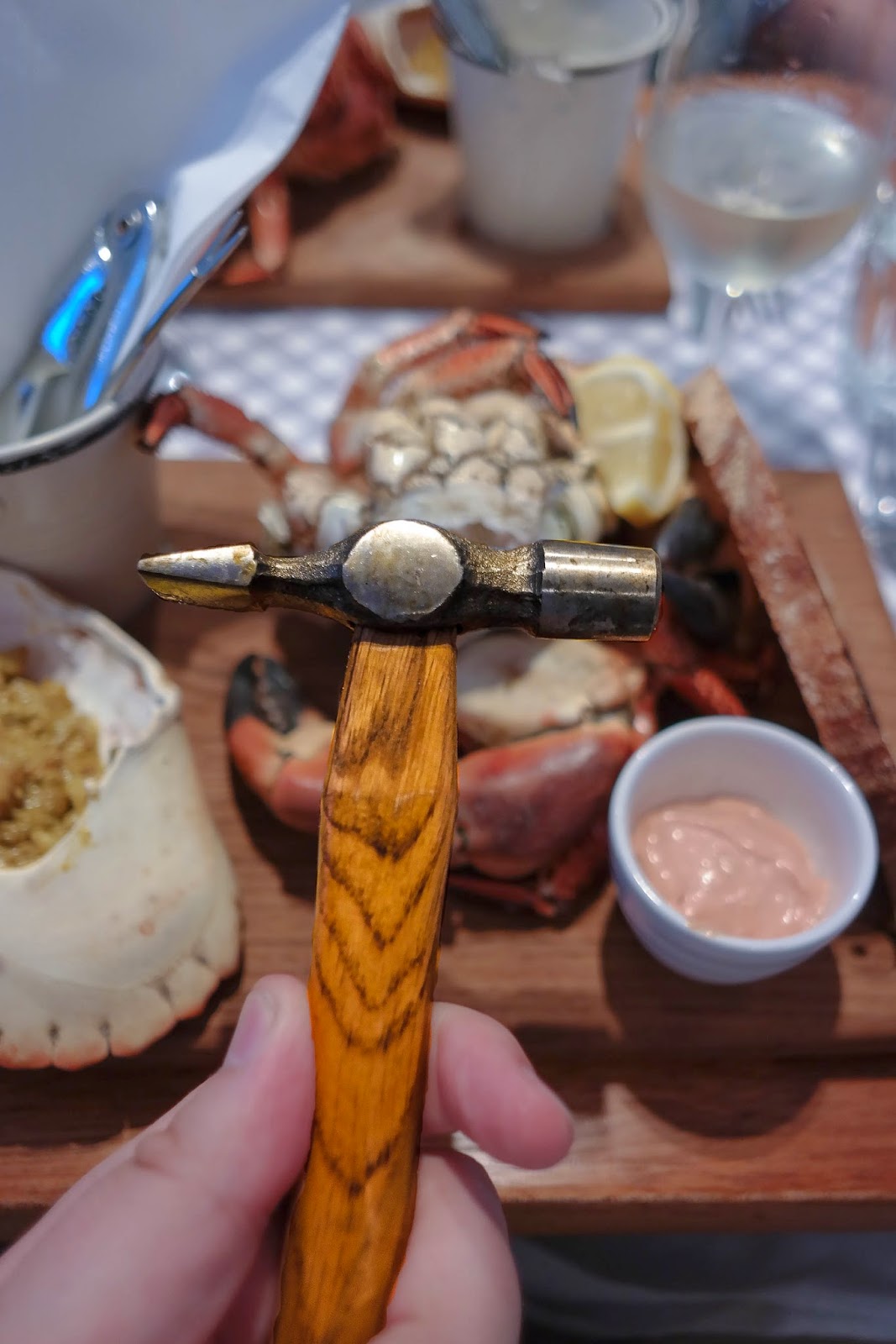 Big claws, filled with juicy white meat - this was a cock (male) crab, so had the larger nippers that lead to more of the good stuff. 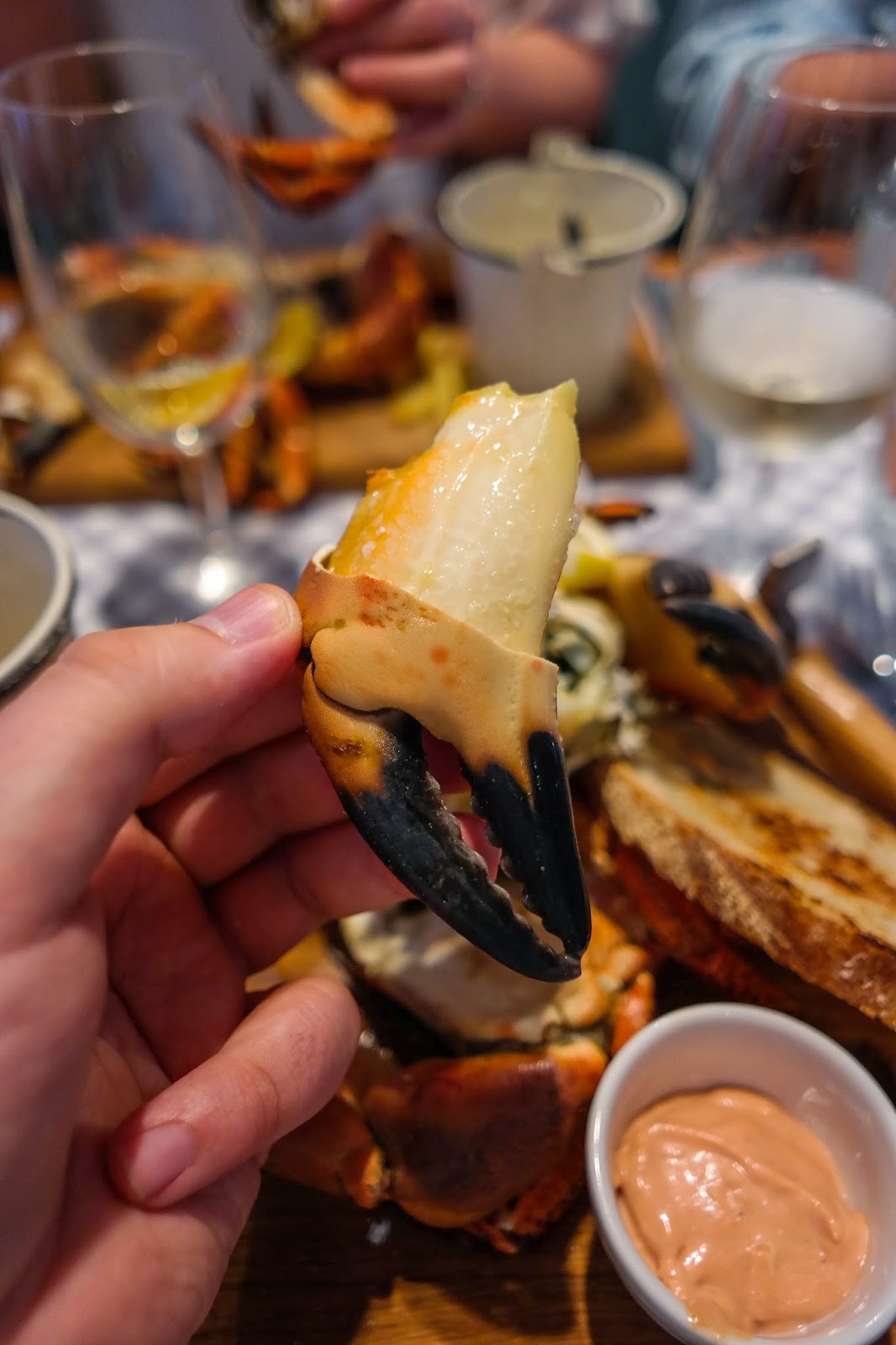 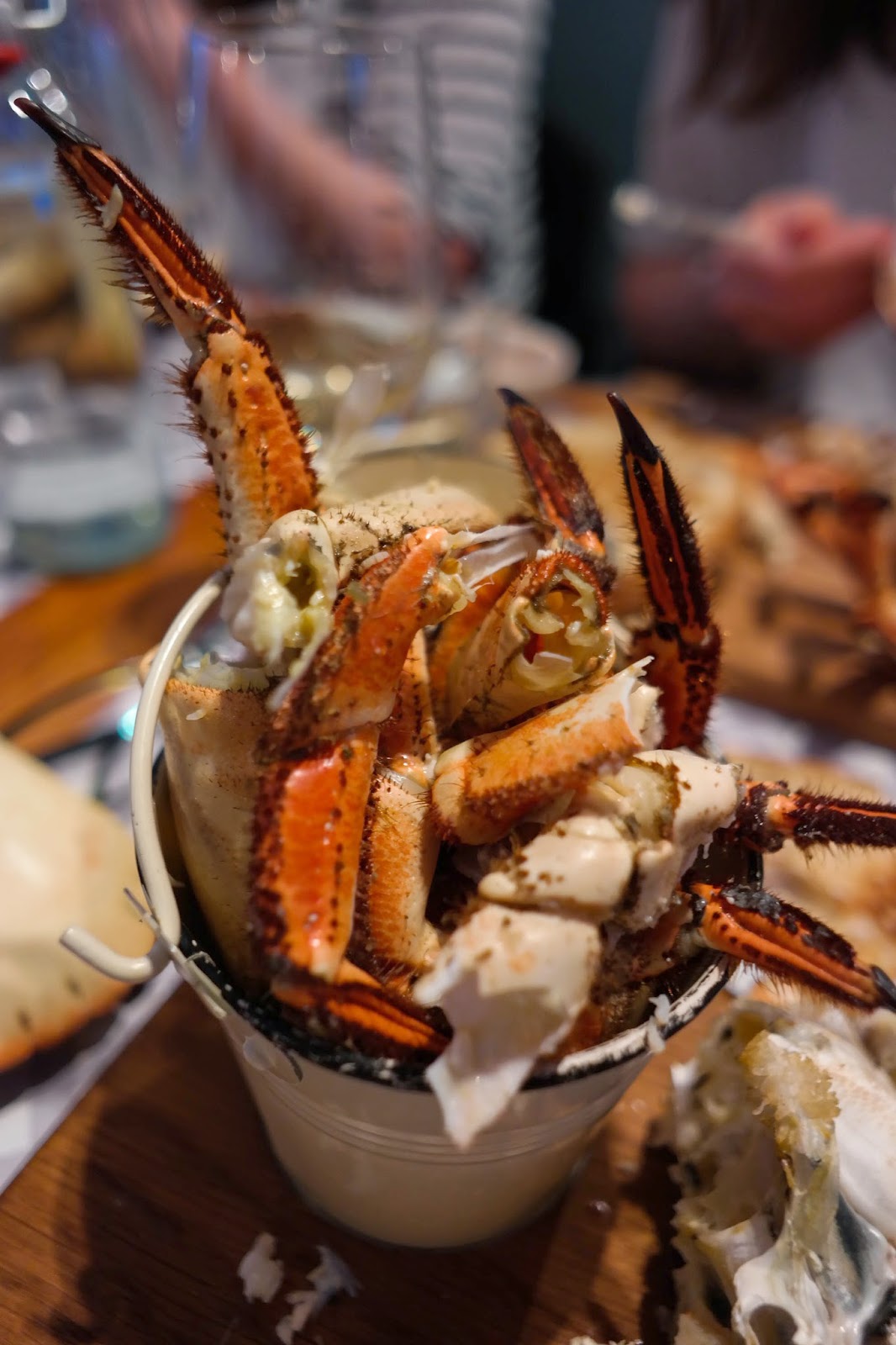 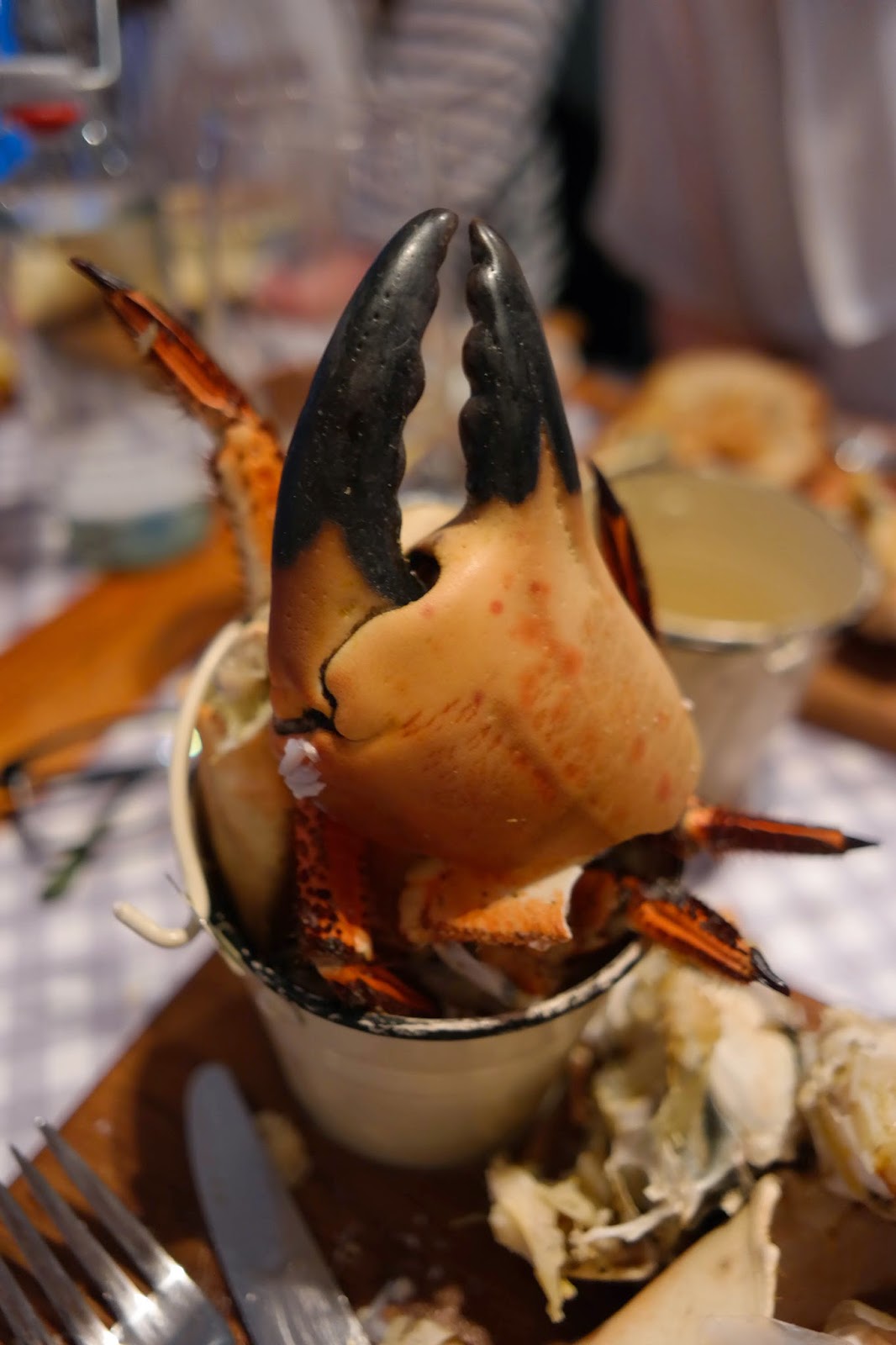 So time for pudding.

Where to go from here, eh?  After sophisticated starters and beautifully hands-on mains (at least in my case) what could a Grubster honestly need now?

Well, the answer's simple.  You remember how I said the whole thing was seaside focussed?  Well, think about what you'd have at the seaside.  Think about summer days on the beach.

I have written elsewhere about the joys of Mr Whippy – that much derided, soft serve ice cream.  Here it was as if they'd taken the concept and revolutionised it.  It was Mr Whippy, Captain, but not as we know it – soft, cold, sweet but also rich and creamy – all of the best bits of the iconic ice cream with all of its worst bits made good.  In fact, with the addition of popping candy and freeze-dried raspberries – not just made good but made awesome. 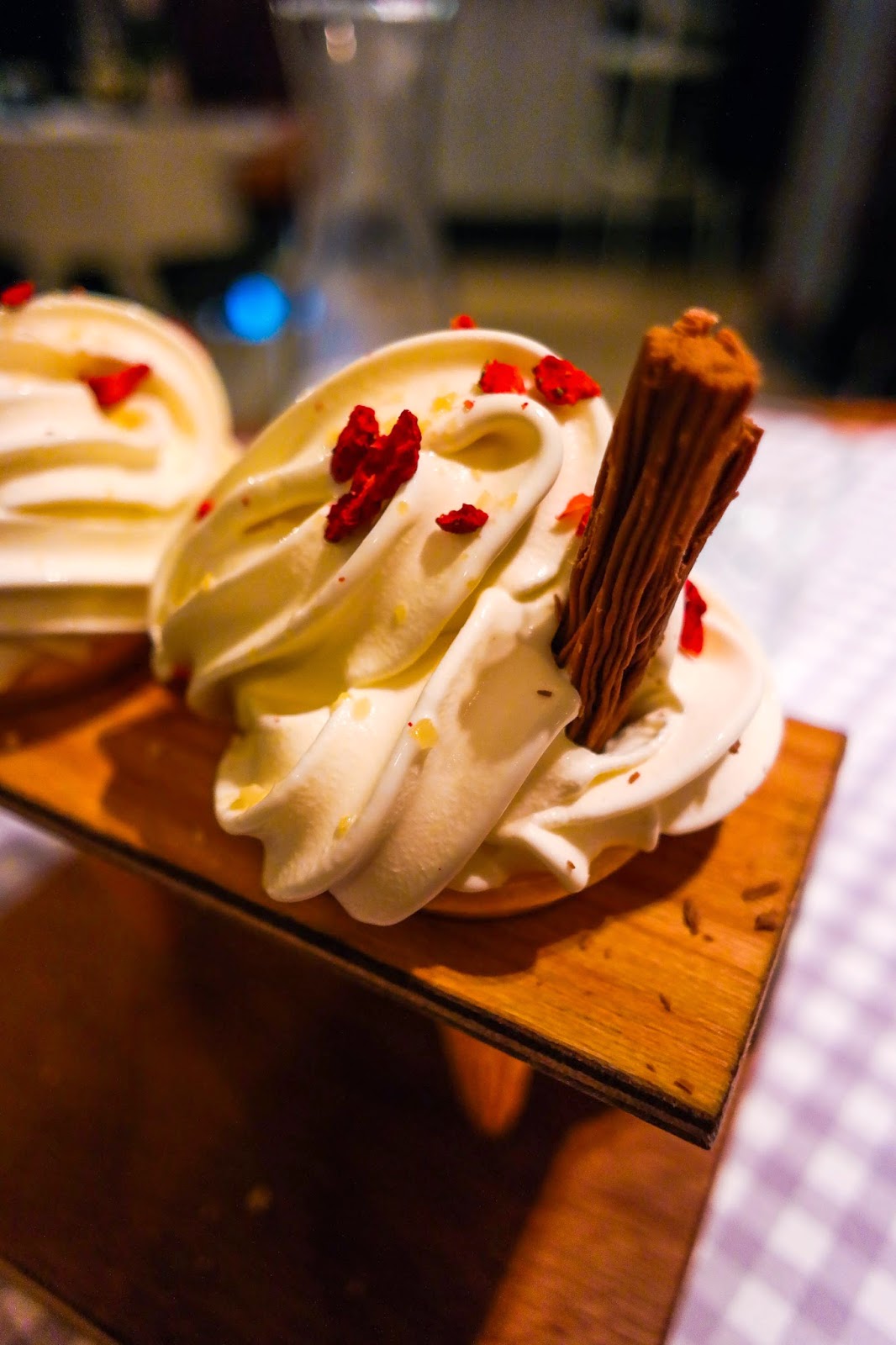 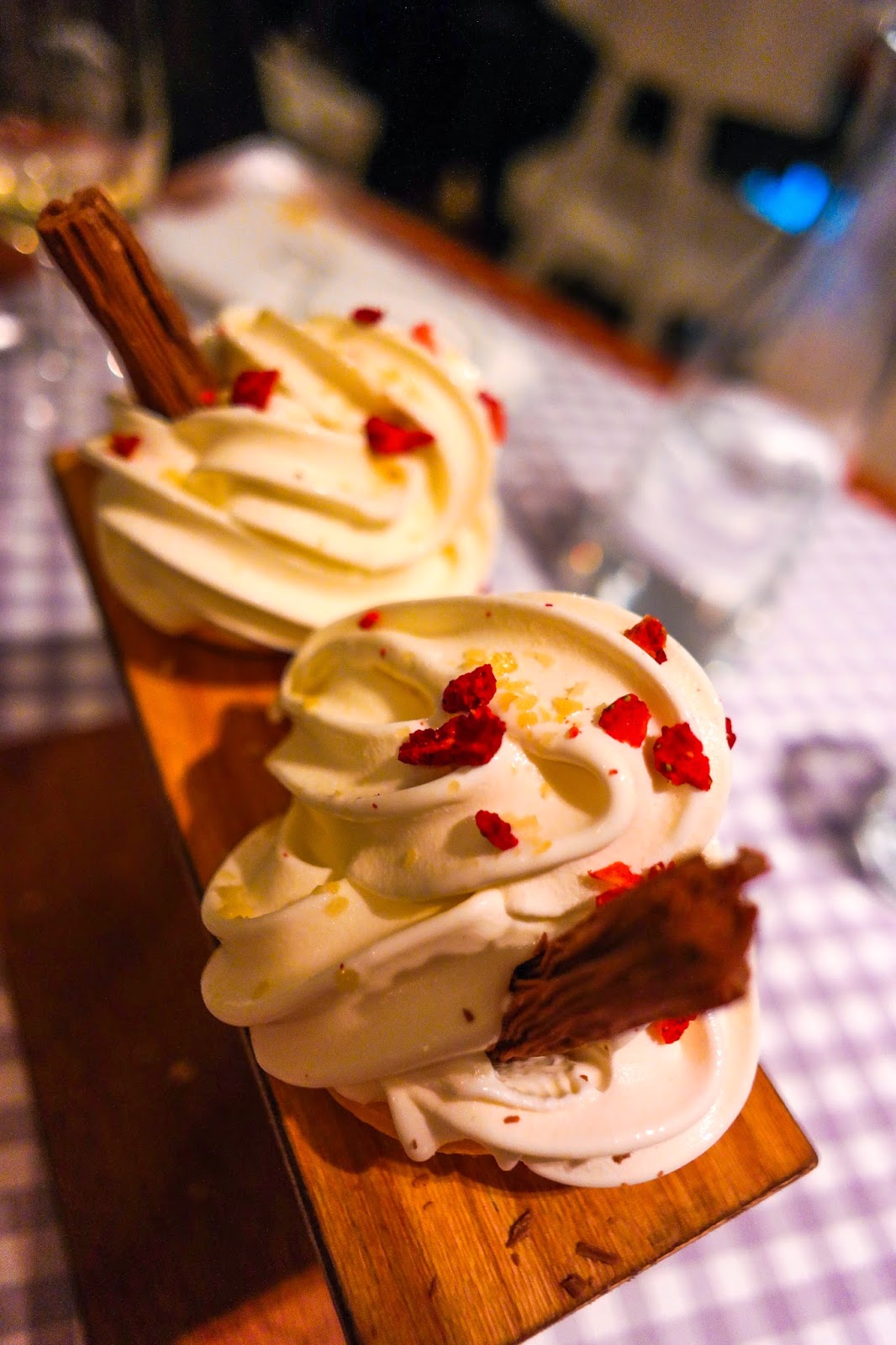 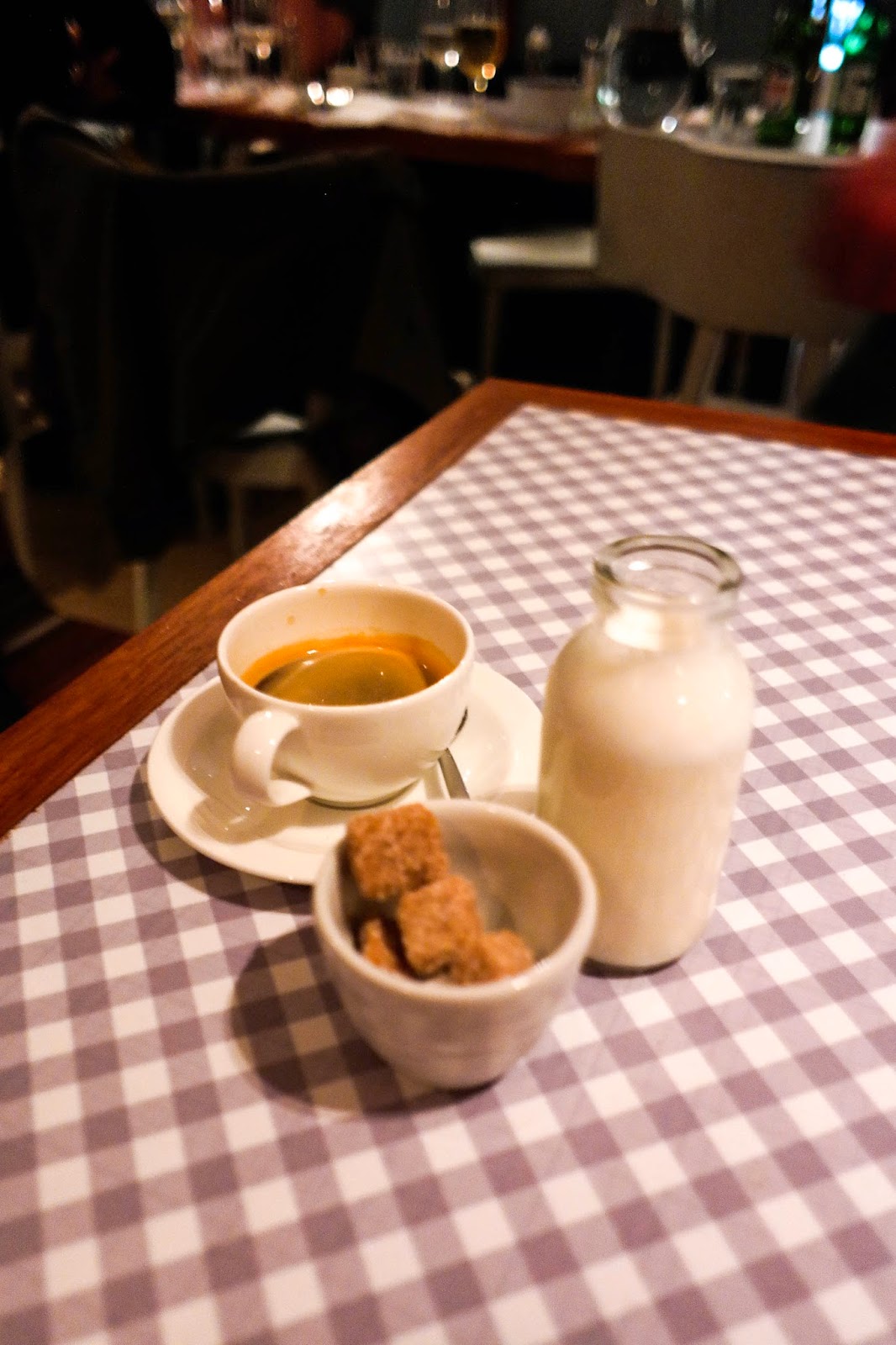 It's also worth taking a moment, if I may, just to remark upon the wonderfully helpful and friendly staff, who sorted us out with a big table as a special request and who knew the menu inside-out and back-to-front.  Cheers, guys.

I think you can already guess what I'd say as my closing remarks.  I loved this place – it's truly fantastic, and well worth the visit.  Price-wise it's not the cheapest place in town – but then it's not bank-breakingly expensive, and to be honest you're eating seafood in London – if you want it cheap, go somewhere you don’t have to transport that notoriously difficult (and costly) to transport foodstuff.  And, you know what?  It is absolutely worth it.  Top marks, definitely.