Some years ago, during the earlier days of our courtship, GrubsterGirl and I drove across the United States – from San Francisco to Miami.  It was an epic road trip, choc-a-bloc with memories and experiences that I shall treasure for my dying day.  It probably also made us as a couple, so that's pretty important to me.

One of those memories was sitting on a river bank in Savannah, Georgia (where the bus stop in Forrest Gump is situated) eating crawfish and generally lapping up that Southern charm.  Crawfish – which we call crayfish – are little freshwater dwelling critters that look like tiny lobsters and which are a big part of Southern cuisine.  You'd recognise their de-shelled tails from Pret sandwiches but otherwise don’t make a particular impact in British eating – even though they’re a rapidly expanding pest to Britain's waterways.

The standard way of eating them is the crawfish boil: a peculiar, wonderful Southern tradition that involves cooking up great vats of the creatures with Cajun spices, sweetcorn, potatoes and Andouille smoked sausage and spreading the results all over a table for everyone to get stuck in.

Since I learned of crawfish boils I have been dying to get to one.  Last summer, Bea Vo (who's behind Bea's of Bloomsbury) ran a series of crawfish boils in London – she's a native Virginian, so probably knows a thing or two about them.  Sadly, I couldn’t make it.

However, she's back, now opening her new restaurant Stax Diner off Carnaby Street – and as a sort of warm-up gig, she organised a thoroughly hedonistic long weekend of crawfish boiling. 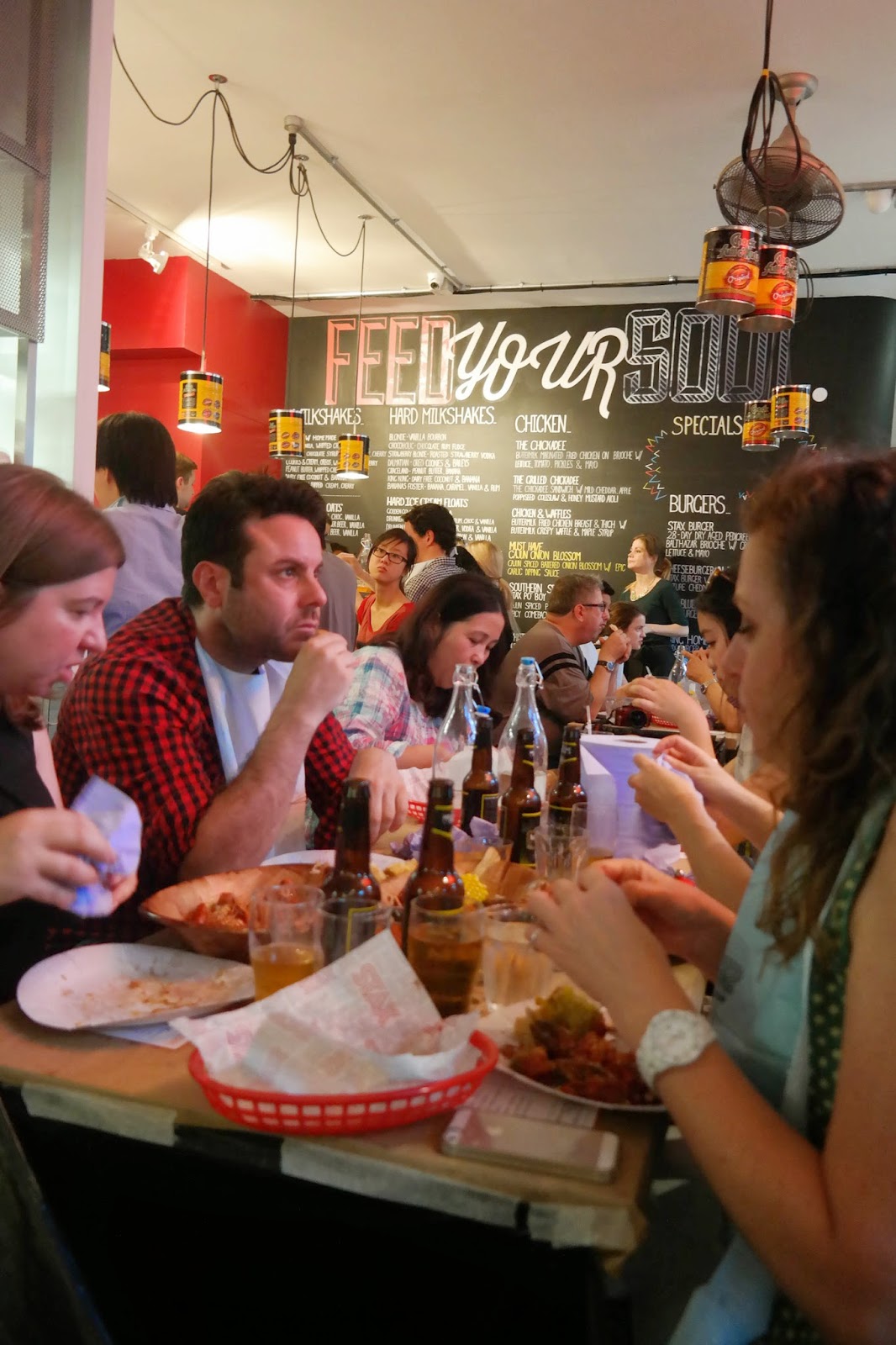 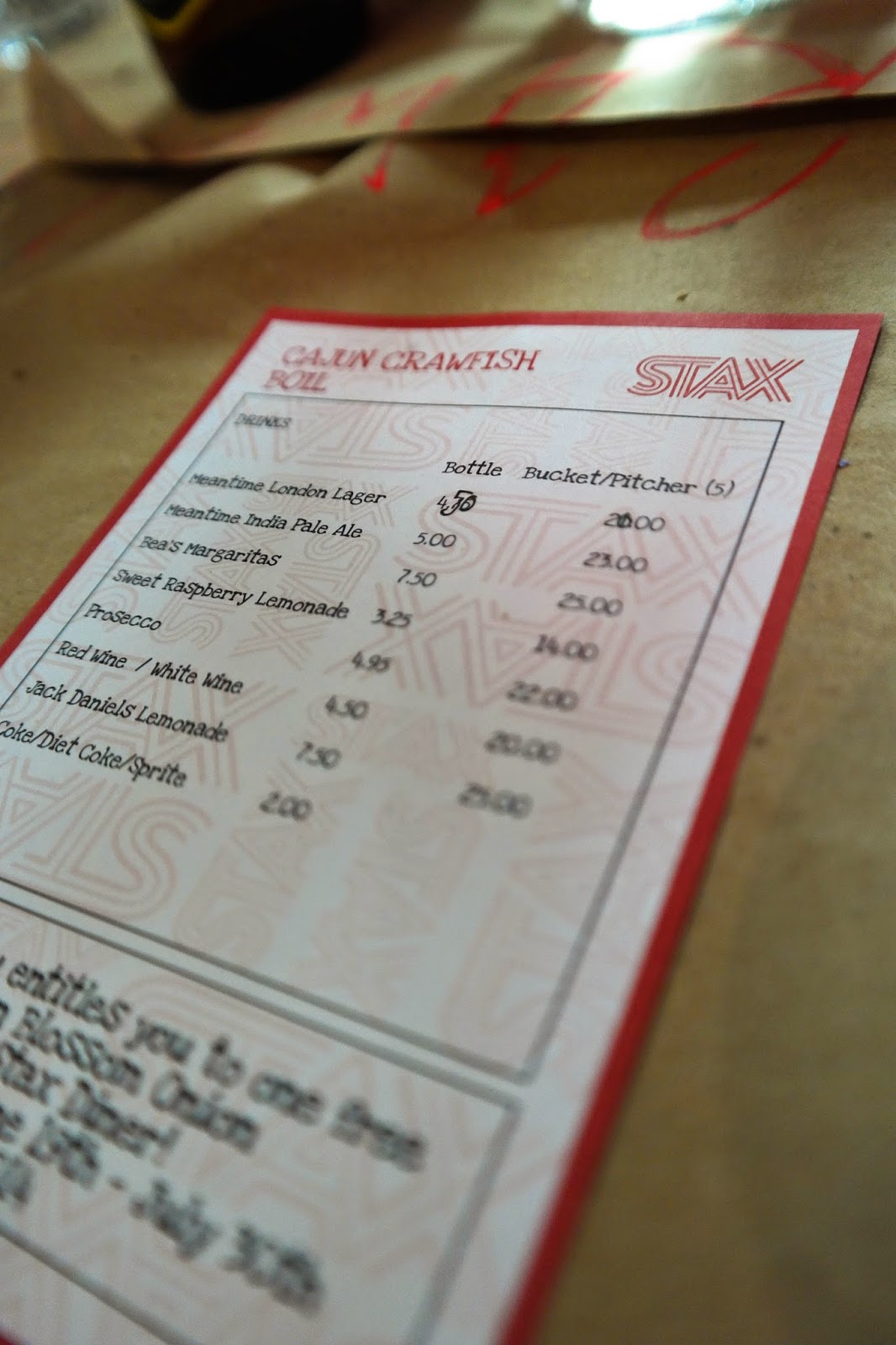 To kick matters off there was a basket of garlic bread – ultra-garlicky, very American. 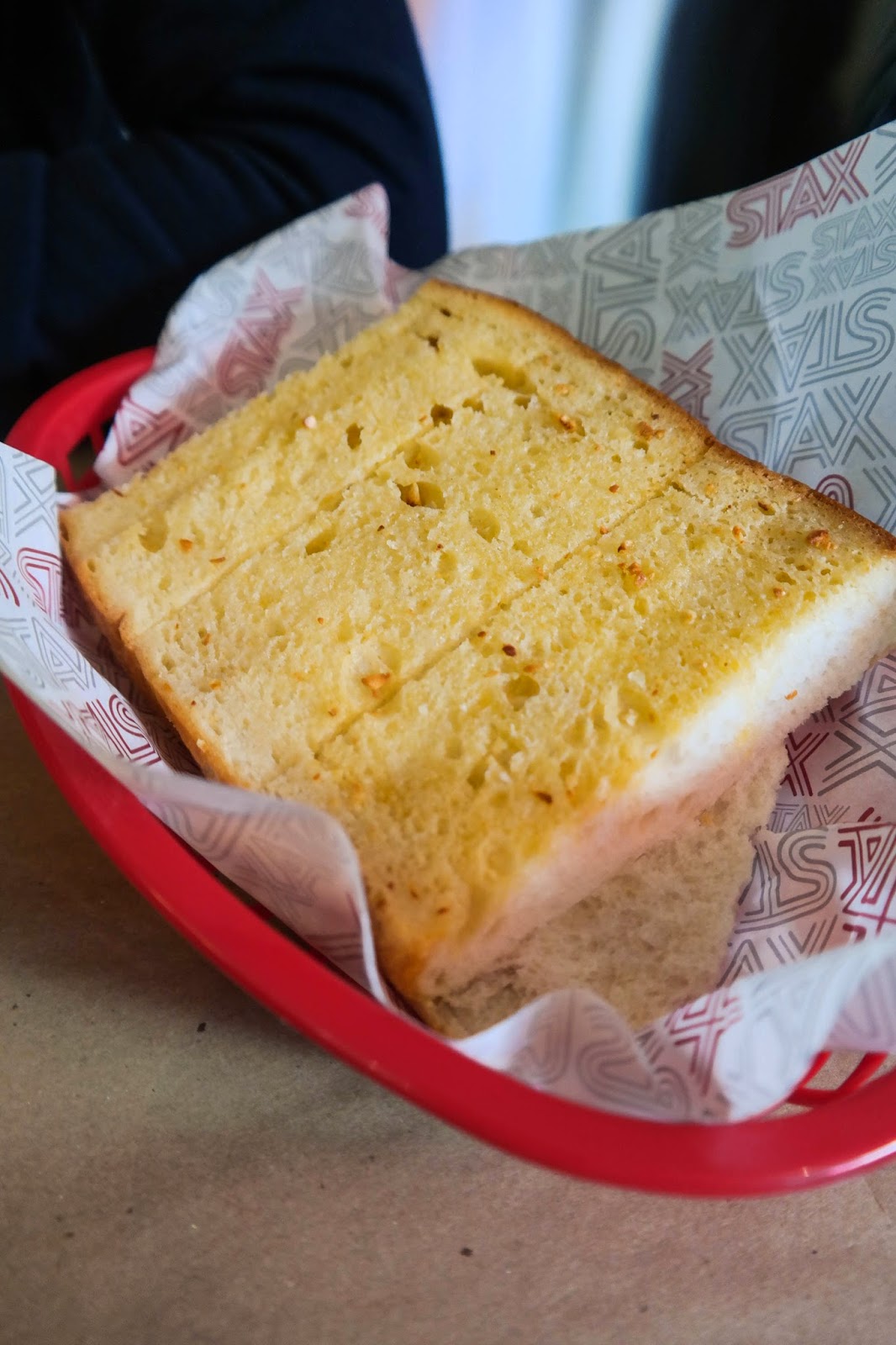 Then there were the drinks.  GG and I ordered up a pitcher of margarita – it seemed like a good economy at the time, and certainly turned out to be – what arrived was epically portioned.  So often when you order a pitcher thinking it'll be more economically sound, you end up getting 2.1 drinks for the price of 3.  Here it was very much more for your money. 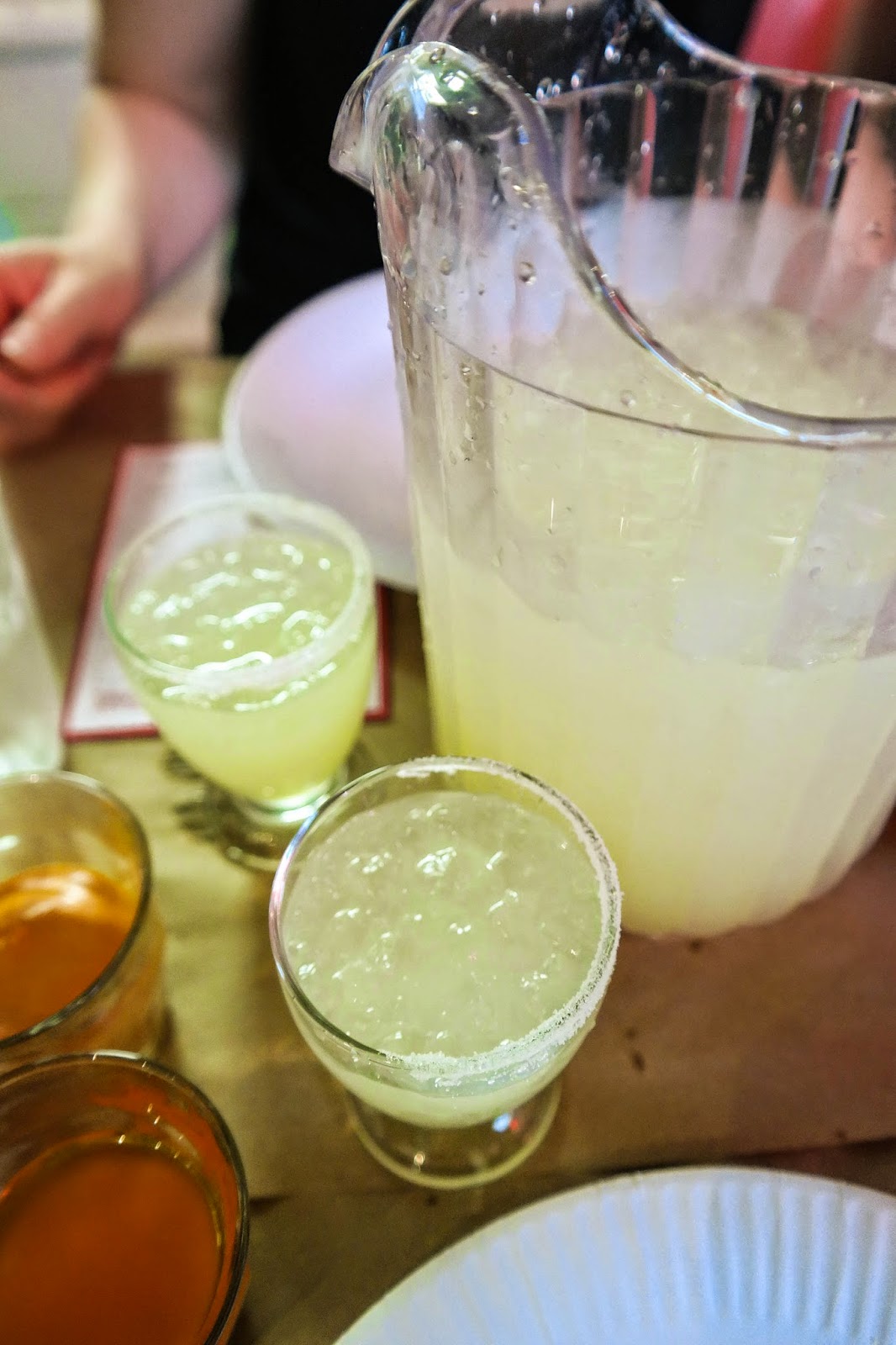 It was also really well done.  GG described it instantly, after the first sip, as taking her straight back to the States – I don't know what it was, but I agree – there was something about the way this was mixed that made it a firmly 'American' margarita.  Perhaps not original, or authentic – at least in the sense of Mexican authentic – but this was the real deal as a drink to wash down Southern flavours. 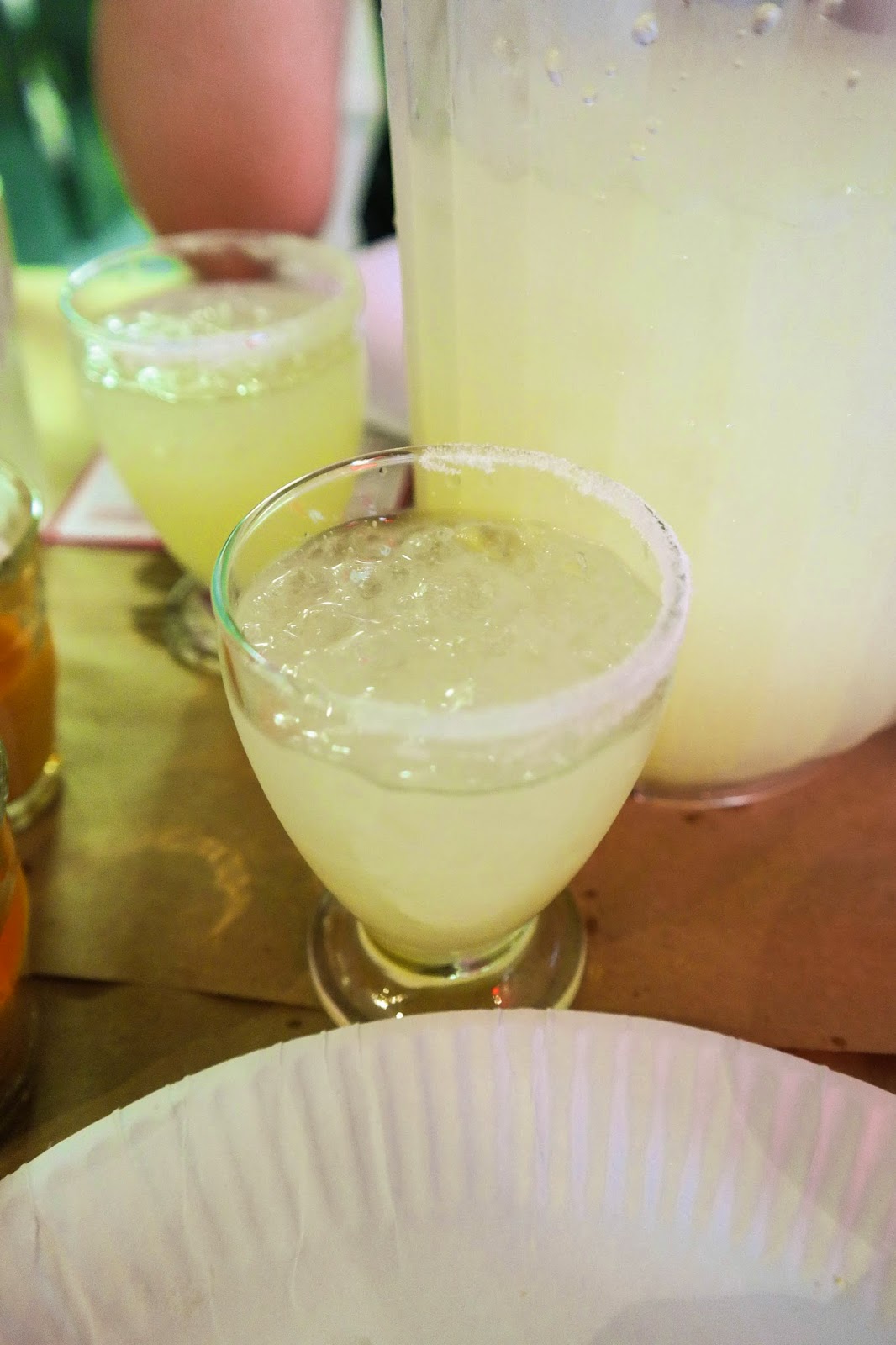 And before too much waiting, there it was – the main event, great, steaming bowls of loveliness.  Crawfish, sweetcorn, sausage and potato. 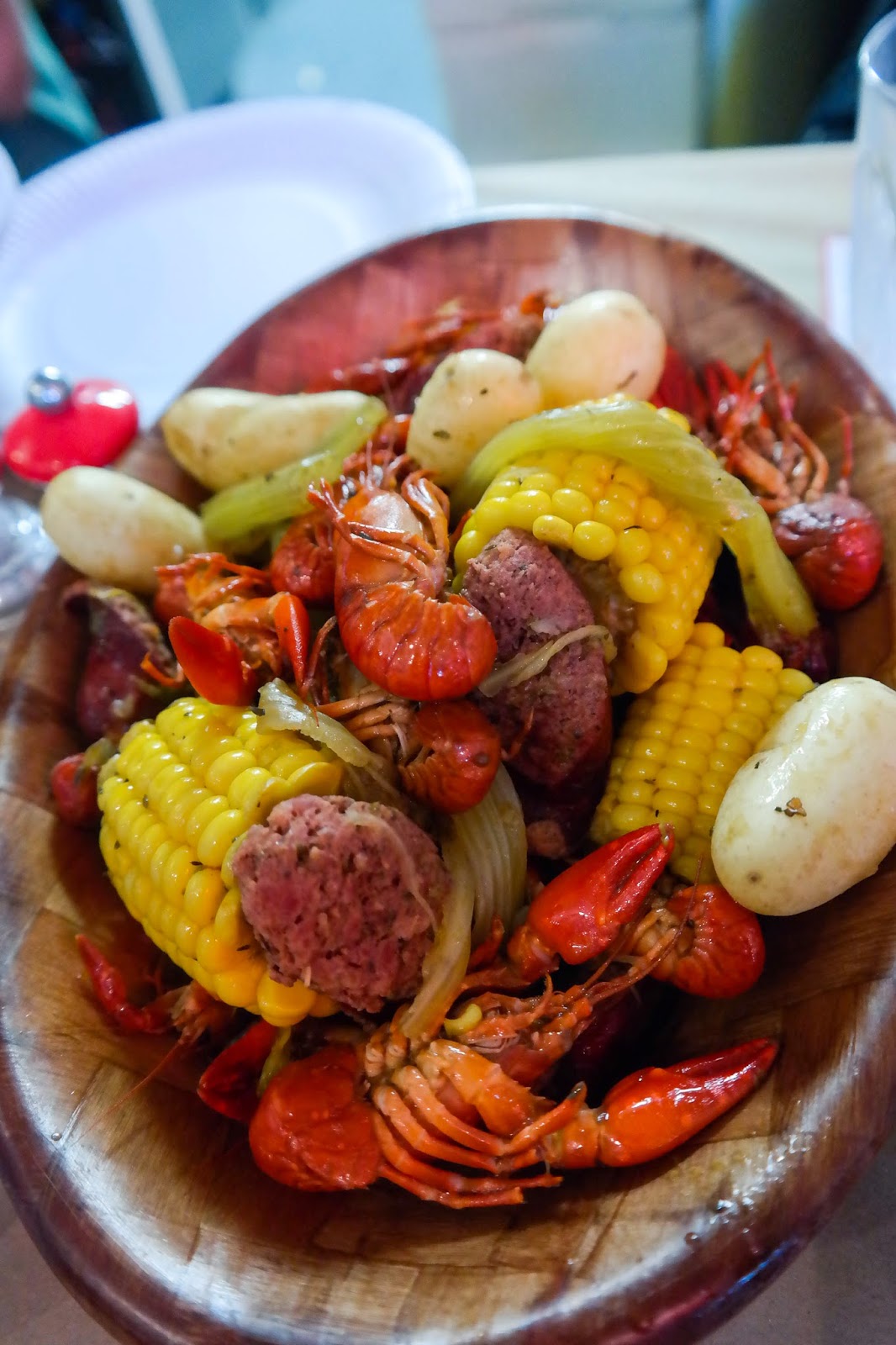 The kitchen, a small space by any standards (in a challengingly small restaurant that makes all that it can of the space available to it) was churning out prodigious great quantities of boiled crustacean.  Thousands – no, I expect tens of thousands – of those beasts must have been served up, all swiftly, all hot and all darn tasty. 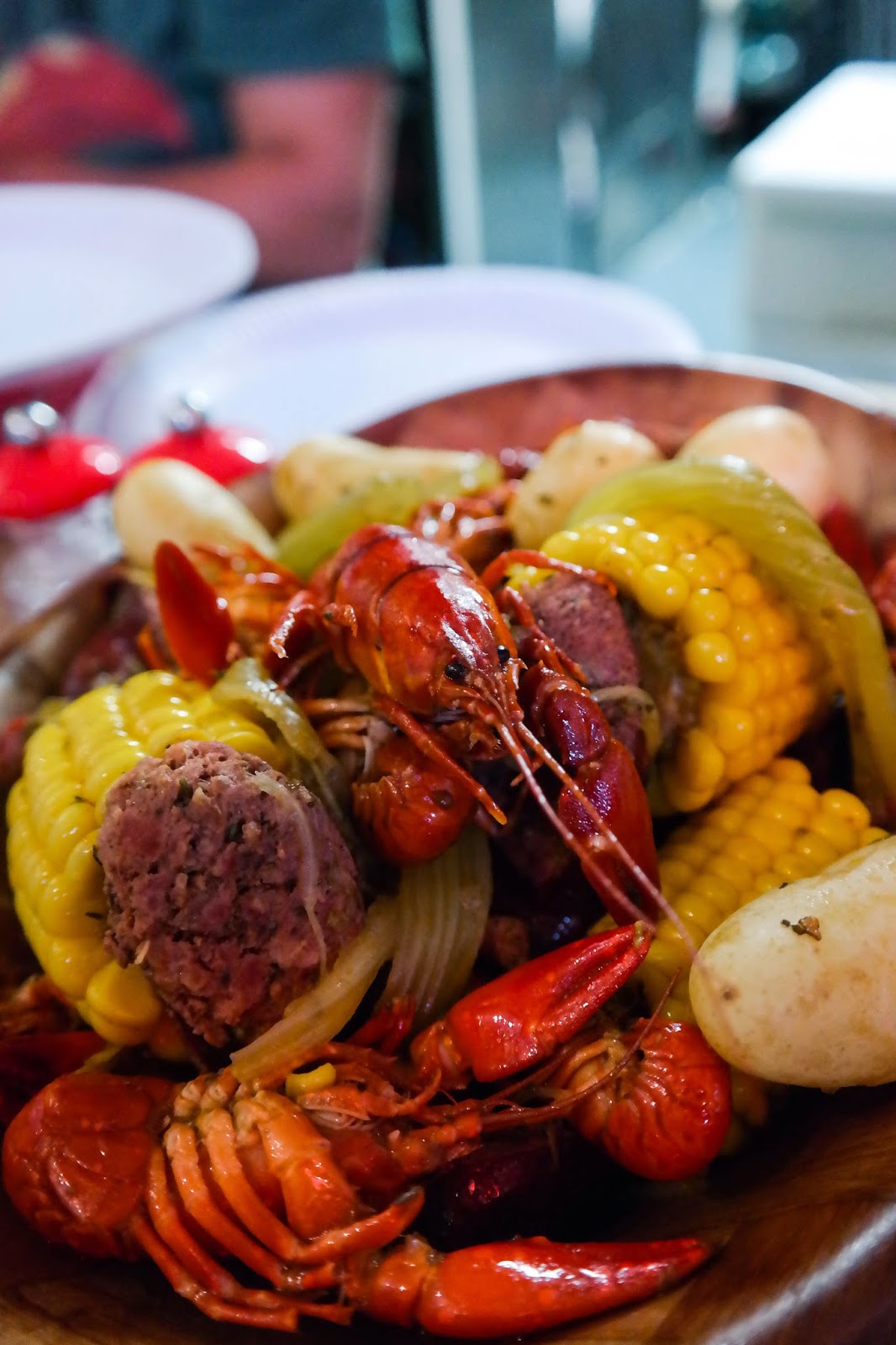 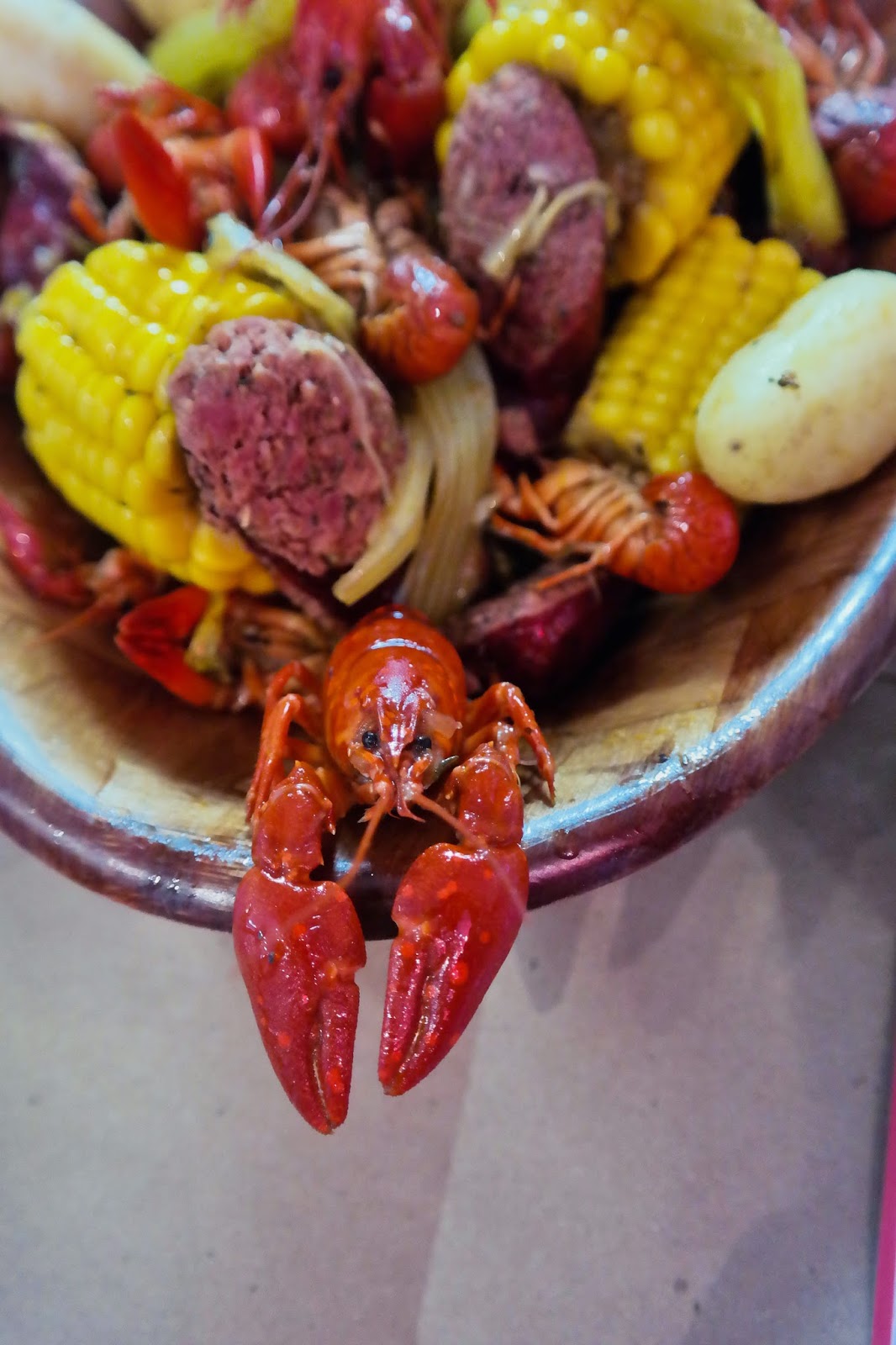 It's a hands-on experience.  You have to peel each little critter by hand, pulling off the head and the end of the tail, then stripping the semi-soft shell back to reveal the bright pink-and-red tail beneath. 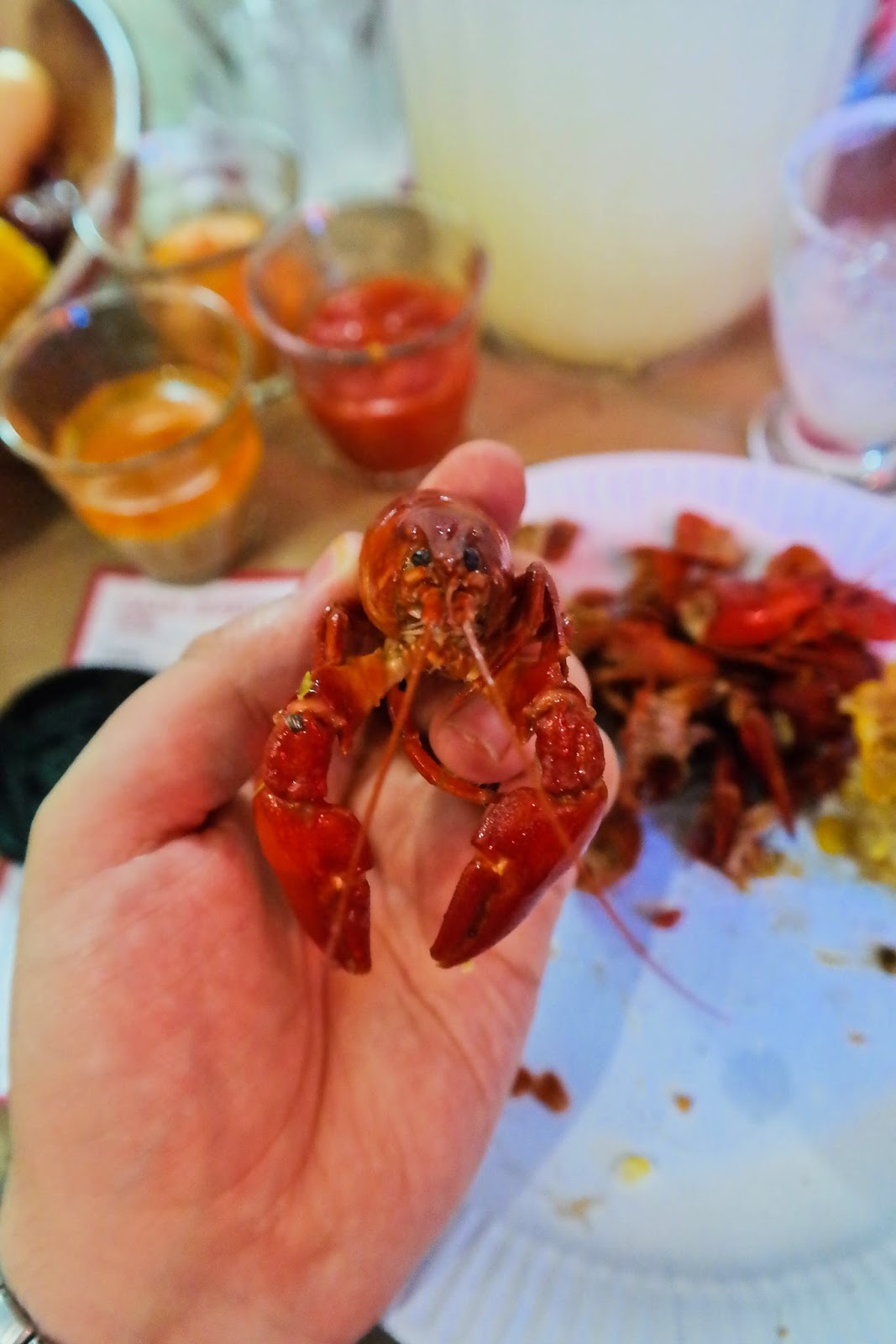 Then it's up to a choice of dipping sauce (clockwise from the bottom): Cajun butter (easily the best – think lobster and butter, but with Cajun spices to match the Cajun spicing of the boil), cocktail (standard, but very nicely done) and come back sauce (Bea's signature sauce – great tasting but perhaps better for a burger than seafood?). 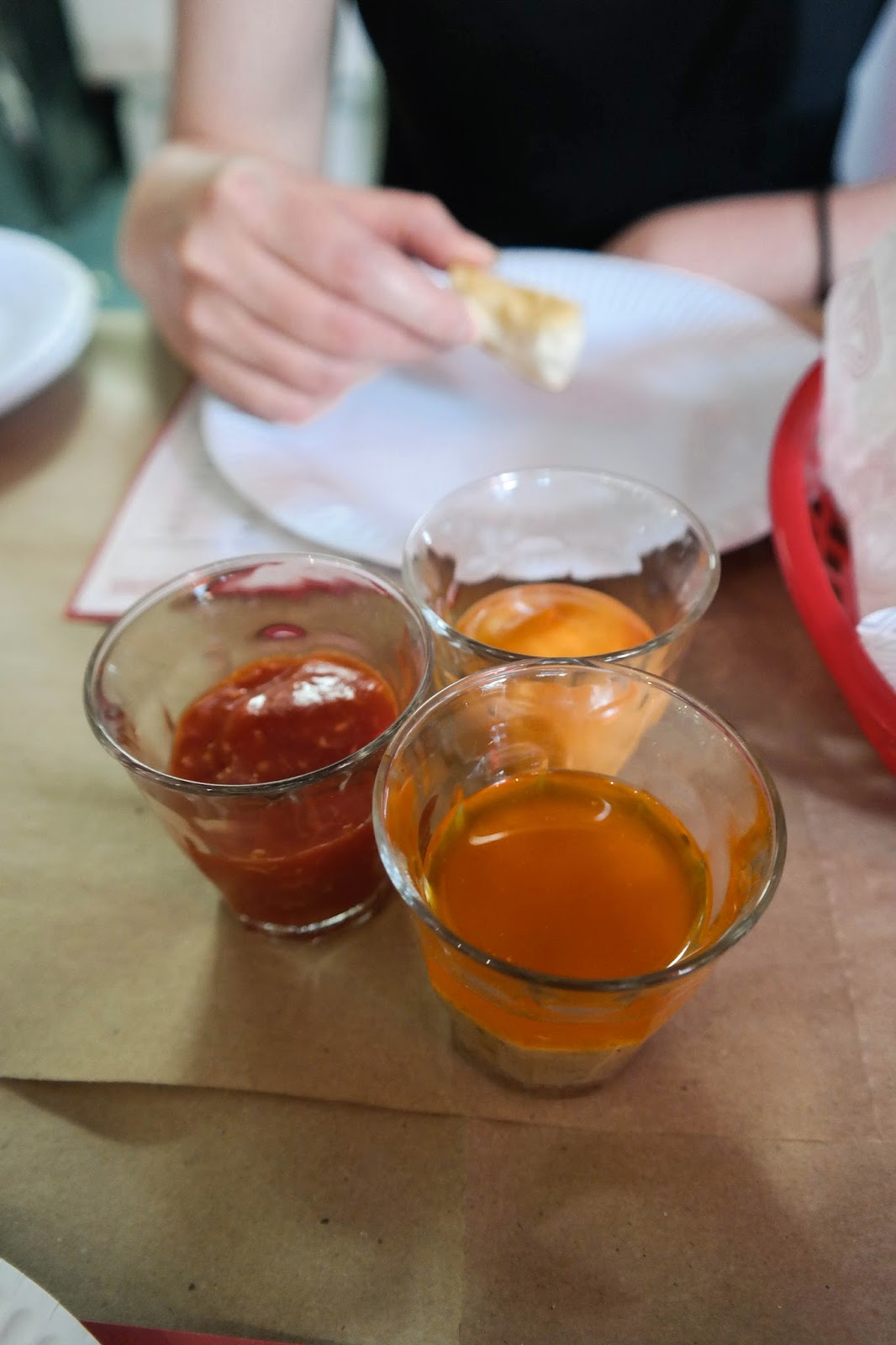 Pretty soon, you find your plate piled high with carcasses.  Which is fine, because the policy is pile 'em high, all you can eat, discard the paper plate... 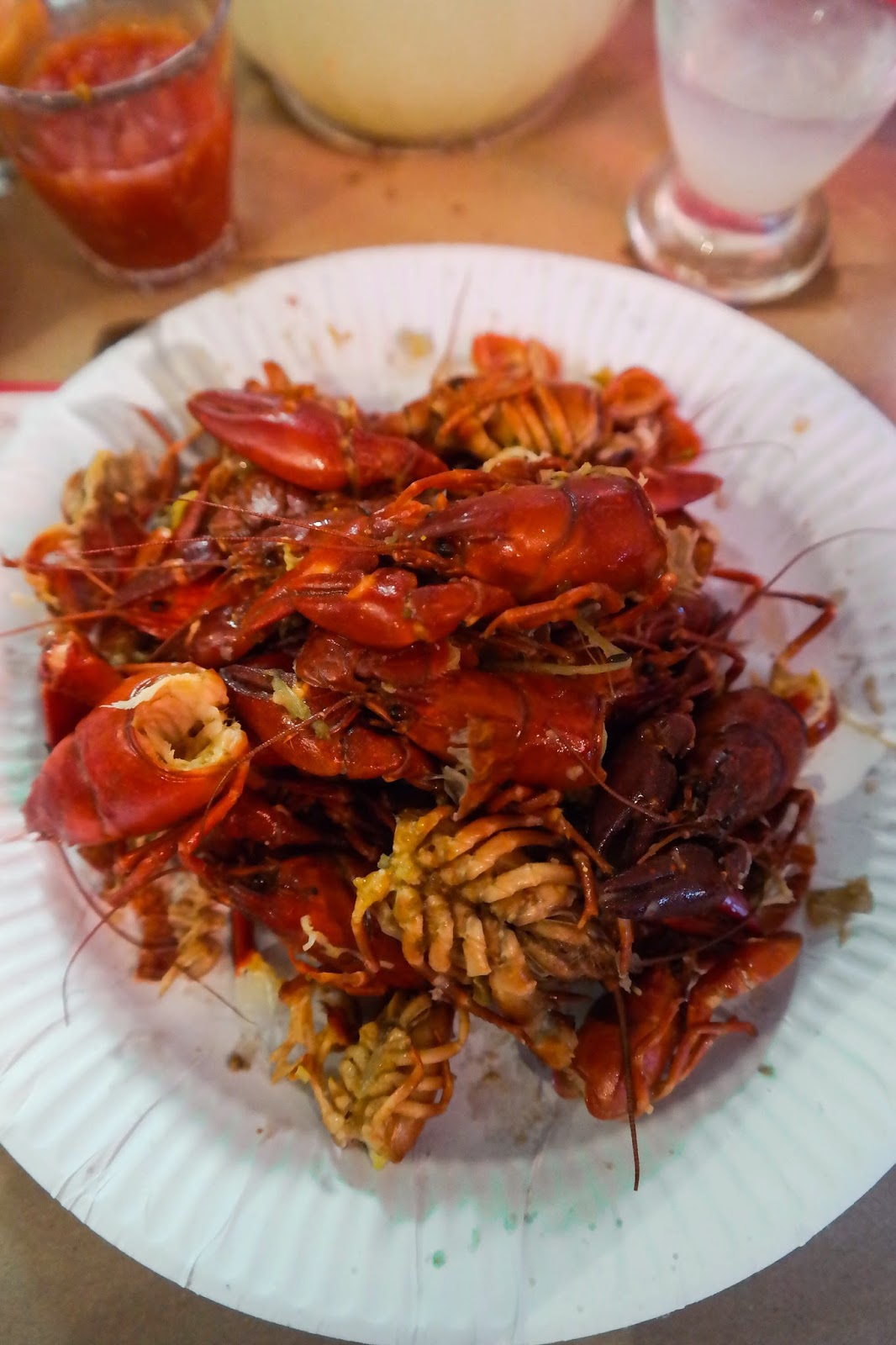 ...and start again on a new one! Basically, munch, dump, repeat – until you're stuffed to the gunnels. 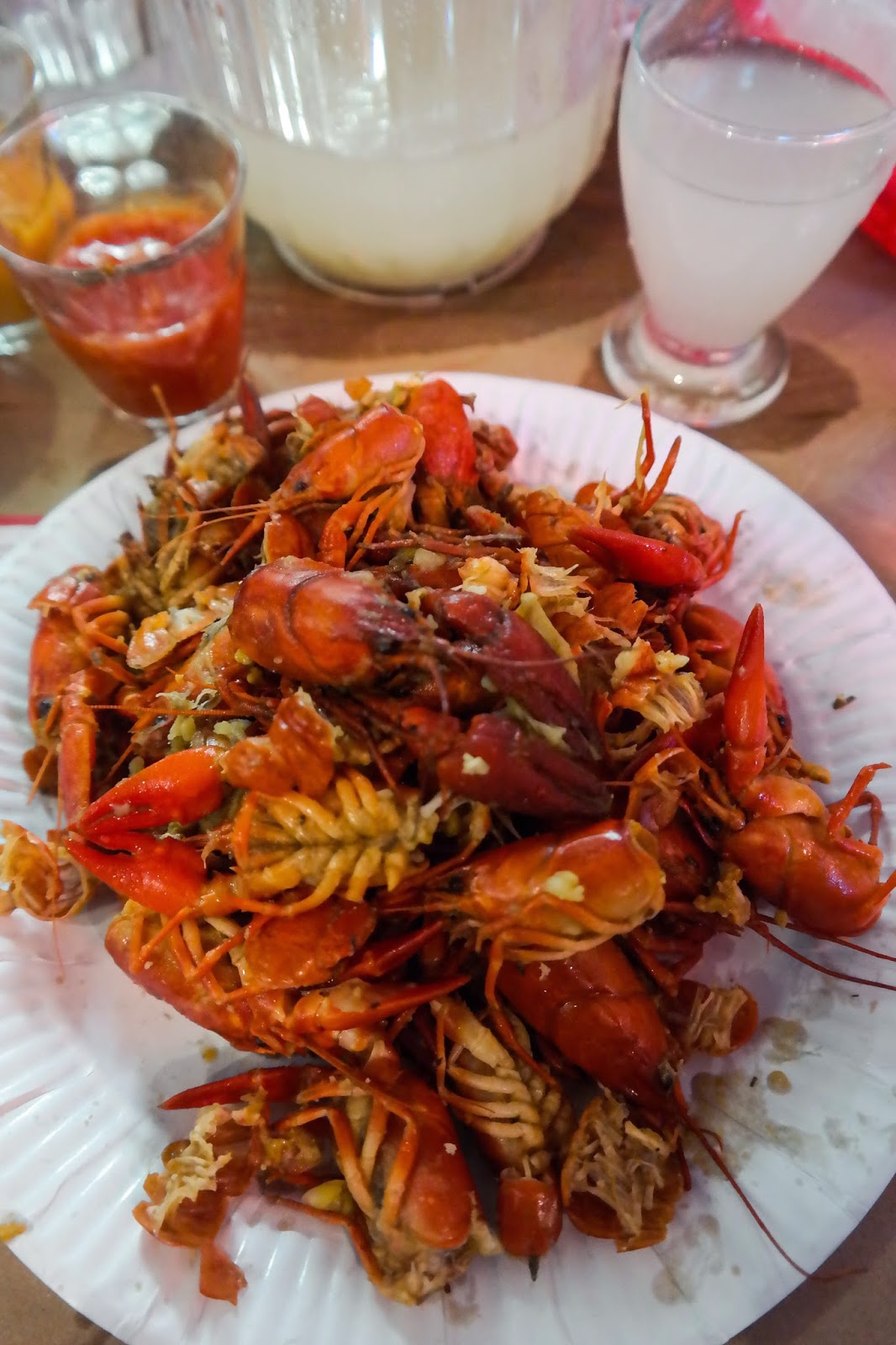 But leave room for pudding (or, perhaps, ought it to be dessert, this being American themed?).  Because Bea knows a thing or two about making sweet stuff. 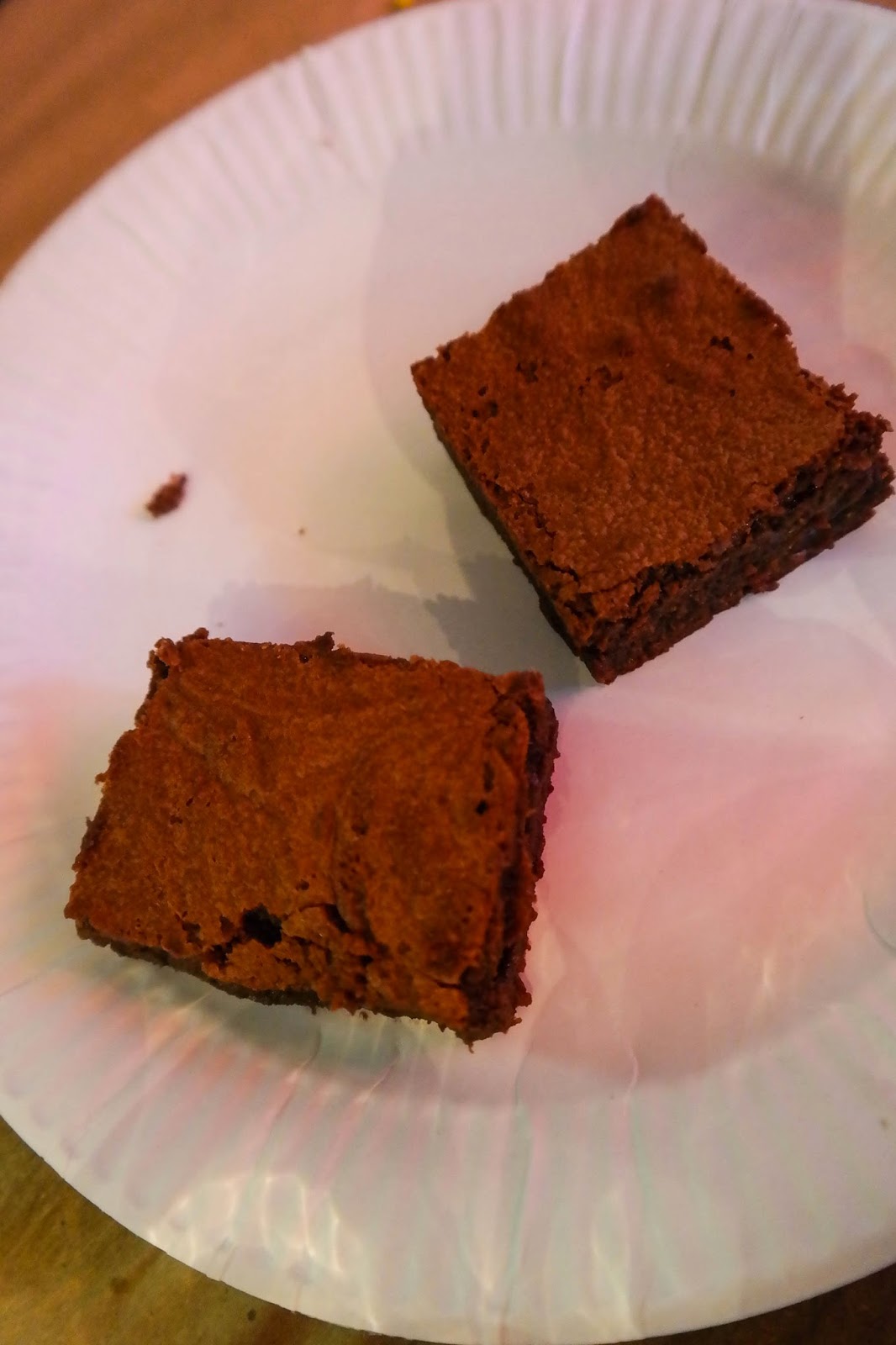 OK, what's so great about chocolate brownies?  I hear you cry.  Apart from 'everything', let me tell you about these chocolate brownies.  Or more so, let me tell you just how awesome they were.  You could spread them on toast.  You'd want to, actually – spread 'em thick.  But they're also crunchy and crusty on top.  They're rich – but not prohibitively so.  They sumptuous, but not fatty or greasy.  They're brownies as they ought to be. 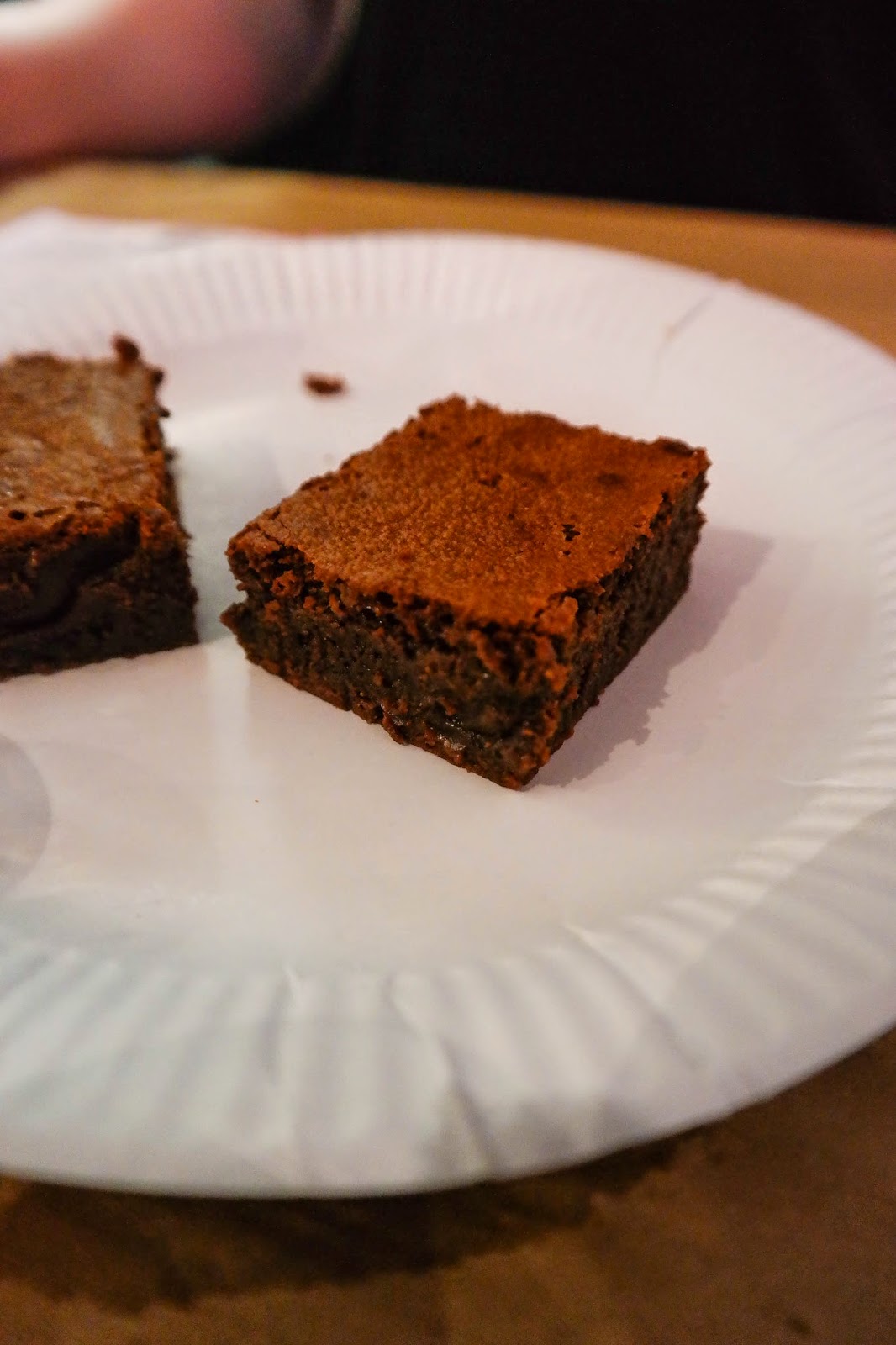 And then there were the ice lollies.  Or again, perhaps that should be popsicles?

I have nothing but praise for these.  I suspect they may have been just pure, mushed and frozen fruit, but who cares.  Because they were simply fantastic.  I could have eaten a dozen of those.  Seriously good. 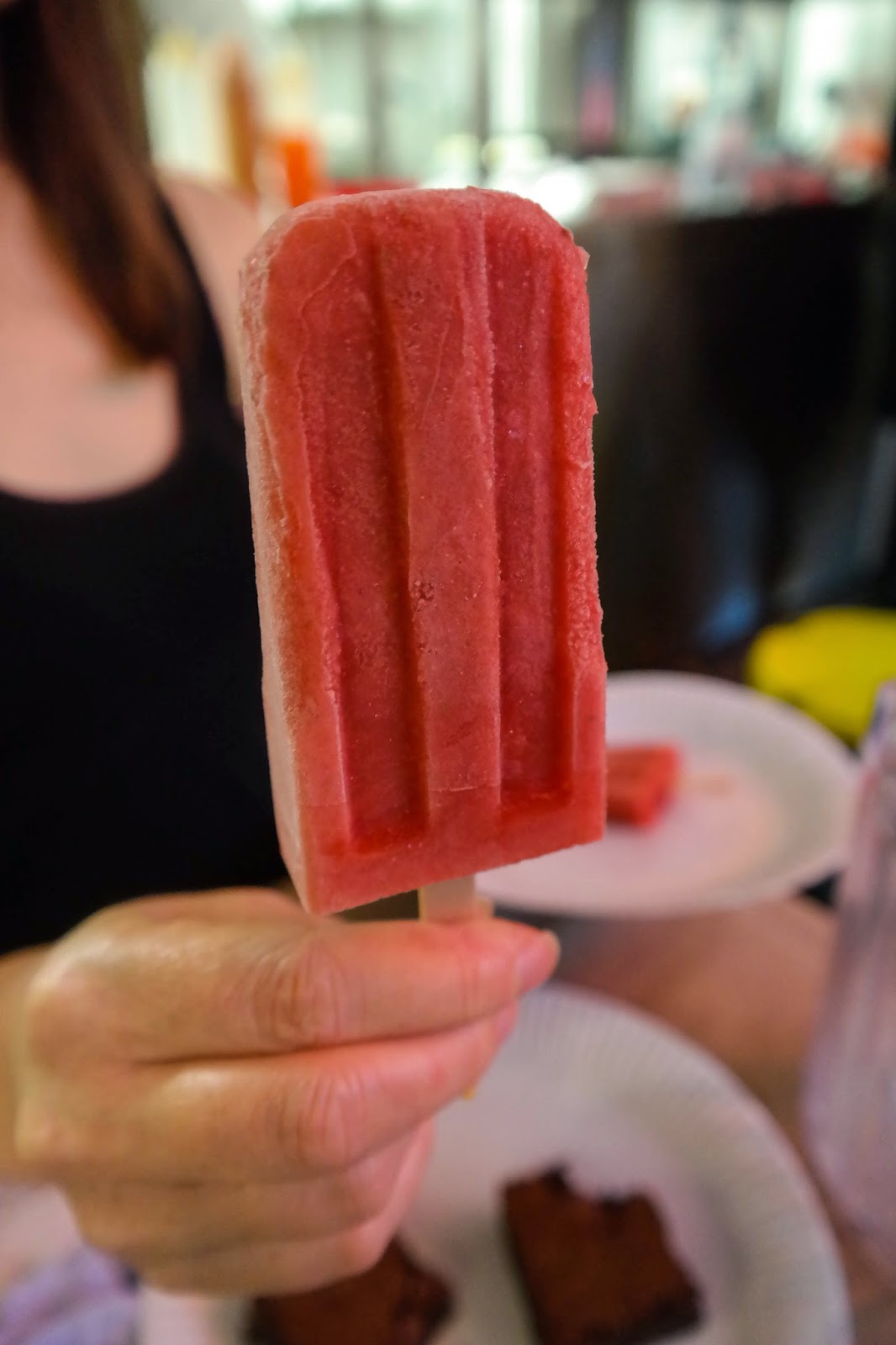 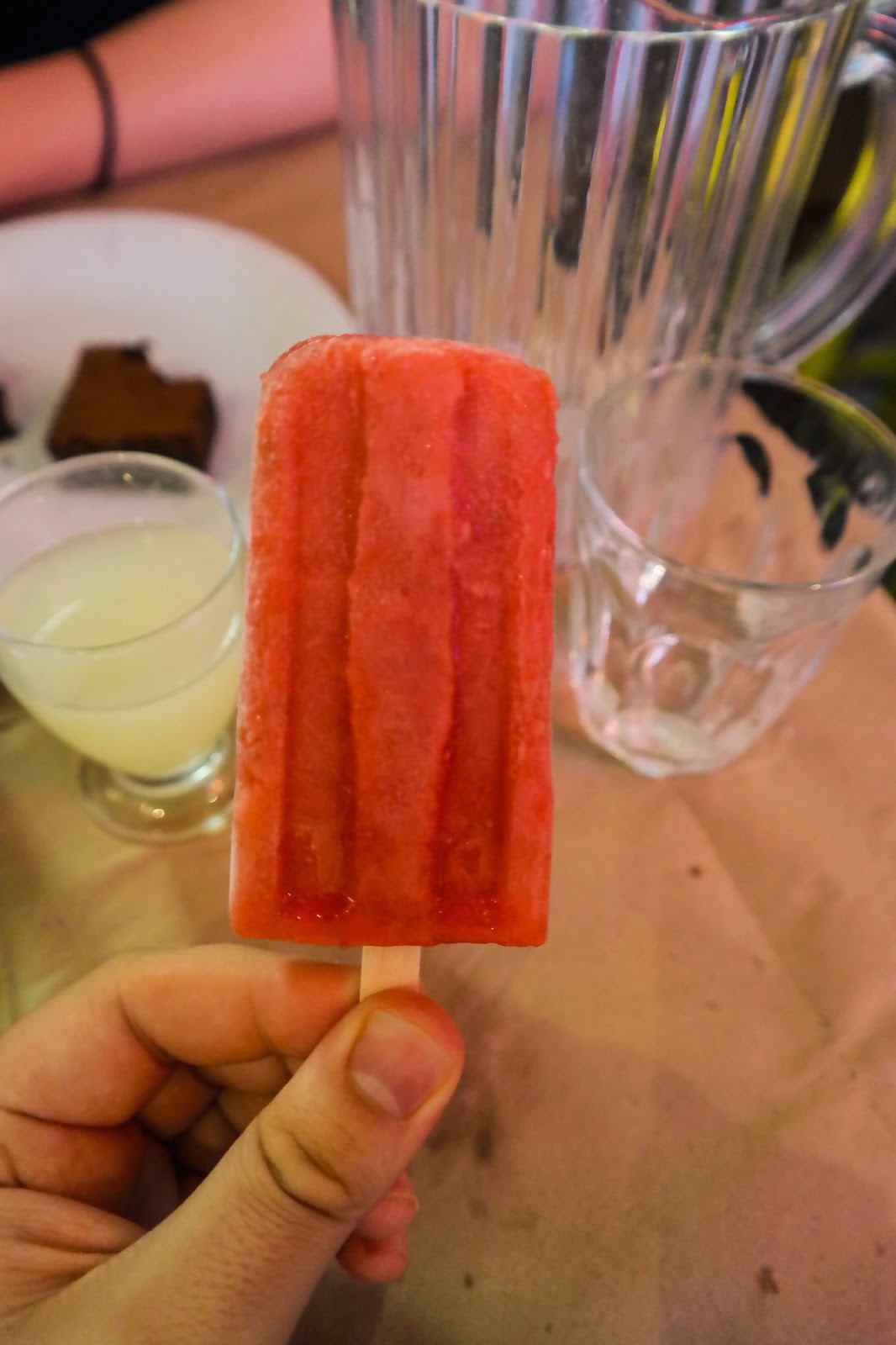 In a sense this all seems a little futile.  The boils end tomorrow, and tickets are sparse.  You're not going to get to go and experience it yourself – and you should, because it's wicked.

Except to say two things: One, there's hope it'll be done again.  It seemed wildly popular when we were there, and with luck that will mean repeats throughout the summer.  And two: Stax Diner opens on Friday.  And there's a soft launch – with 50% off food.  If the product turned out at Stax is as good as the boil, you'll be in for a treat.  So, even though I can’t tell you I've eaten the food and can recommend it, I still feel able to say with confidence: take a punt and give it a go.