Anyone who's hung about in the vicinity The Breakfast Club's various locations across this fine city will know it's popular.  You know it's popular because there's always a queue.  And the queue is always, always looooooong.

I remember when GrubsterGirl was living up in the barren northlands of Angel, during our early courtship days, we always used to go to a pub called the Elk in the Woods for brunch on a Saturday.  We always went because we always wanted to go The Breakfast Club and couldn’t get in and couldn’t face a 45 minute queue.  I remember thinking at the time "golly, that place must be good, why else would someone wait in the cold and the rain for the best part of an hour for a breakfast burrito?" (remember that this is before the time that burritos were big news, much less ones stuffed with breakfast) (and, yes, I am the kind of person that uses the word 'golly' in my internal monologue).

I'm sure that someone, somewhere, has done a study on this – I can see some version of Don Draper and Peggy Olsen hanging around in smoke-filled rooms chatting about the results of some survey or market research that proves it – we all know that the more popular a place is, or at least looks, the better it must be.  So goes The Breakfast Club.  It's good, and we know it's good, because there's always a complete fucker of a queue.

Which brings me to this: I finally went to The Breakfast Club.

There's a new(ish) one in Battersea, at the top of the Clapham Common side of Battersea Rise.  It's been there a few months and is not too far a stretch from our home, although I have always been put off by the queues.  You see, the weekend it opened – on its very first day – I remember walking by and seeing an epic queue.  So I've always avoided it slightly.

But, you see, both GG and I were off on a working day, so we figured we would be safe, there would be no queue.

OK, so the queue wasn't long.  In fact, it was non-existent when we arrived: there was another couple waiting to be seated when we walked in, but that was it.

However, clearly smelling blood, we were taken outside and actively arranged in a queue.  This was odd, thought I, because there seemed to be some free tables inside – they must all be booked thought I, because otherwise they'd seat us.  As another couple walked by on the pavement I could see them clock that, even at 11am on a weekday morning The Breakfast Club had a queue, and I could see in their faces the dawning realisation that The Breakfast Club must be jolly good because it had a queue even at this decidedly off-peak time of day.  Just as I imagine it was dawning on my face that I was being played.

This realisation became a certainty when we were eventually seated and shown into a dining room that was, at best, half empty.  Quick note for the management: Being used as impromptu free marketing for a restaurant I'm about to give money to does not whet my appetite in any way; on the contrary it starts the meal with a slightly bitter taste.

We ordered drinks to enjoy whilst we read the menus: a pitcher of fresh 'beetlejuice', a medley of beetroot, carrot, apple and ginger.  We also ordered a couple of cappuccinos.  More about them later.

The menu is an eclectic mix – fun if you like a range of options at breakfast, drifting from their infamous breakfast burrito through the standard full English and eggs benedict, to more filling non-breakfasty foods.

We ordered, to be shared between us, Boston Beans, a bowl of homemade baked beans with barbequed pork, a fried egg and French toast, and Huevos Al Benny, a bit like eggs benedict if you swapped the ham for chorizo, roasted peppers and guacamole and sprinkled the whole thing with fresh chillies and paprika.  The latter came with a side of home fried potatoes.  Don’t know why.

The beans were, at best, disappointing.  They were homemade, that part was accurate.  The egg was fried – although solid as a rock.  The pork was virtually non-existent.  By which I mean we go two scraps – one each, yay! 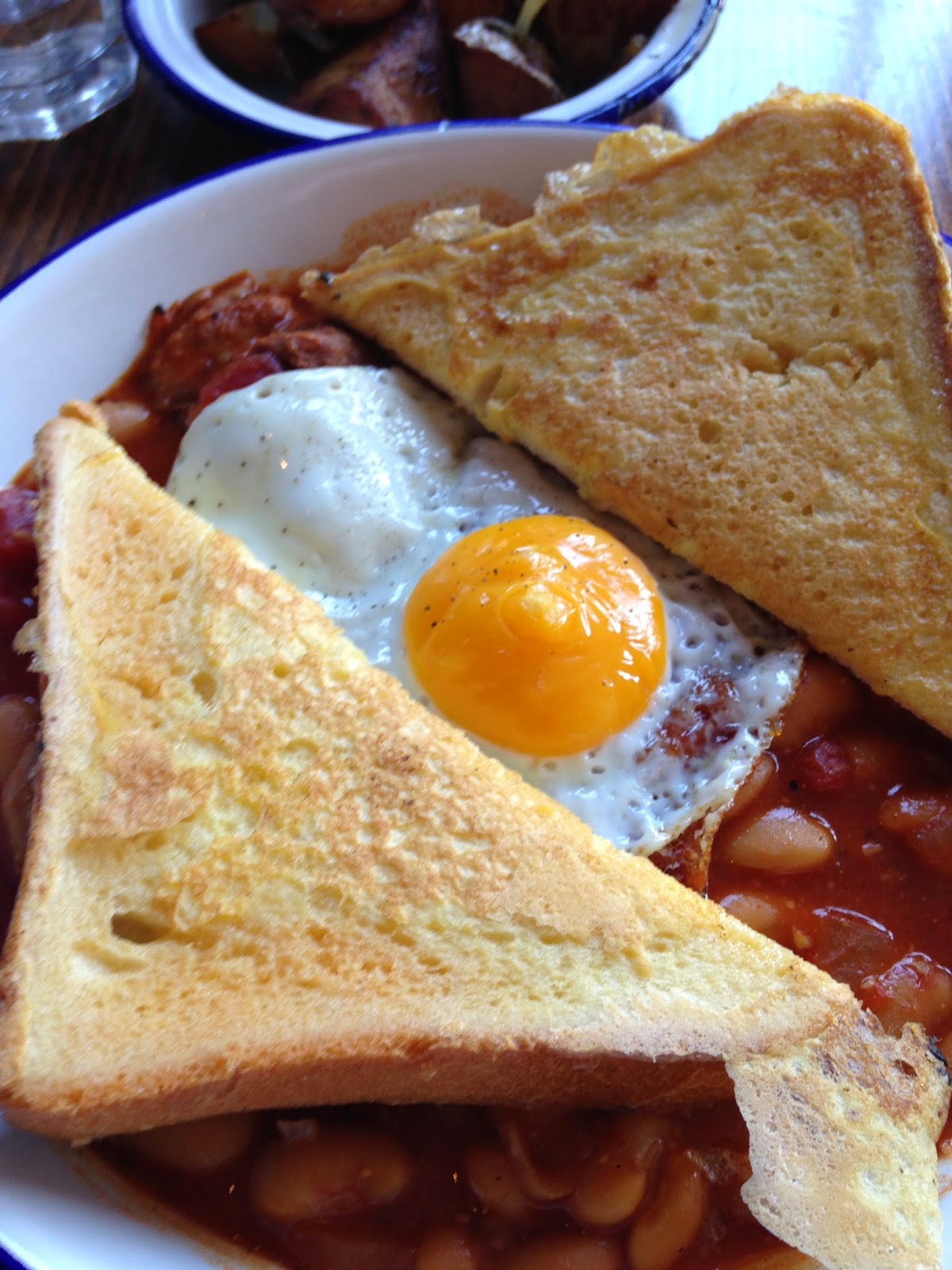 We liked the eggs.  It's not an obvious combo, but it's one that works.  The eggs were fresh and beautifully poached and the hollandaise had just the right balance of richness to vinegar.  The chorizo was good – although could have done with being peeled (no, really, it had an inedible, un-cuttable sausage skin that I'm pretty sure should have come off before cooking).  The avocado was good touch as well.  The home fries I could take or leave. 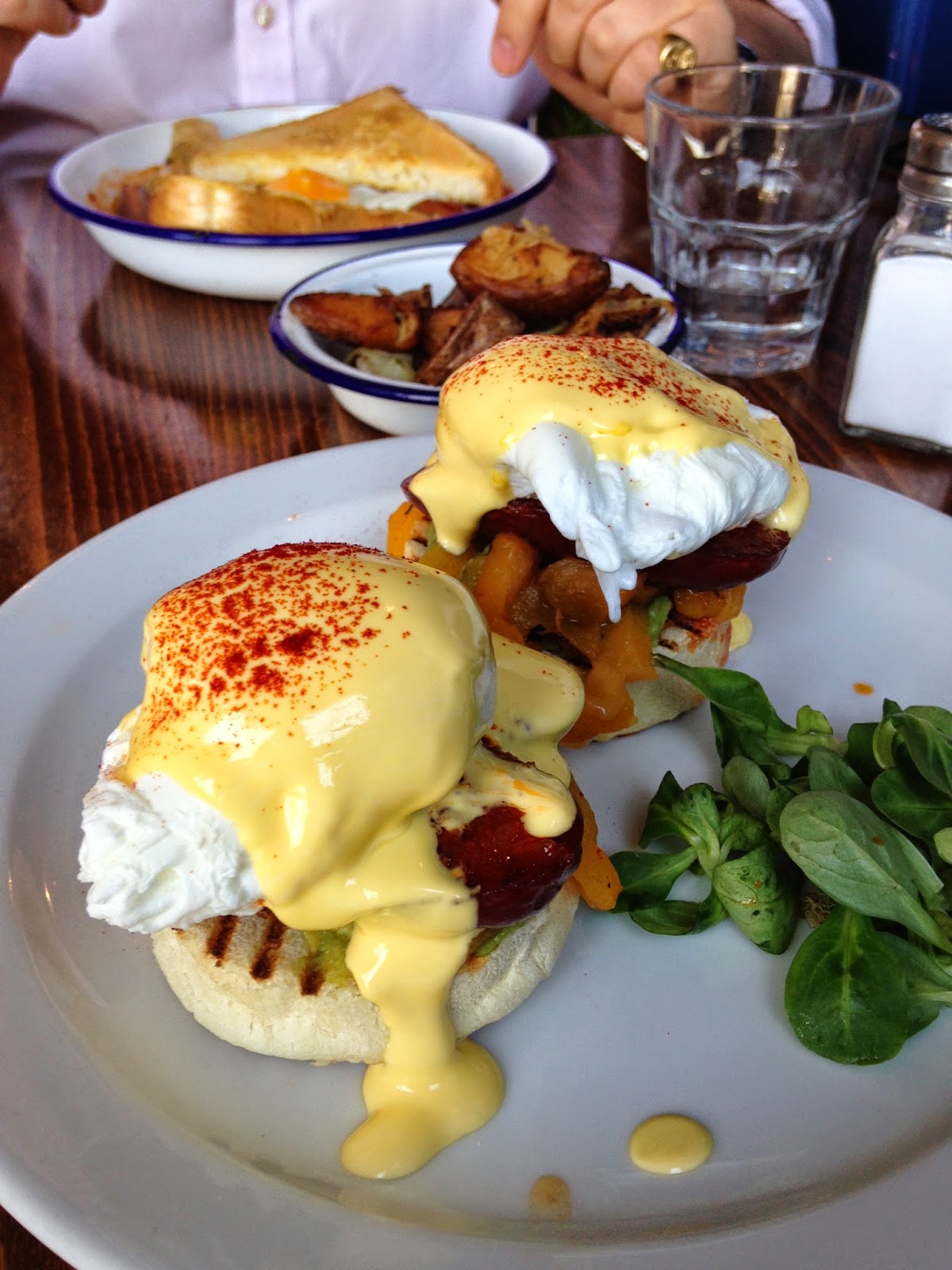 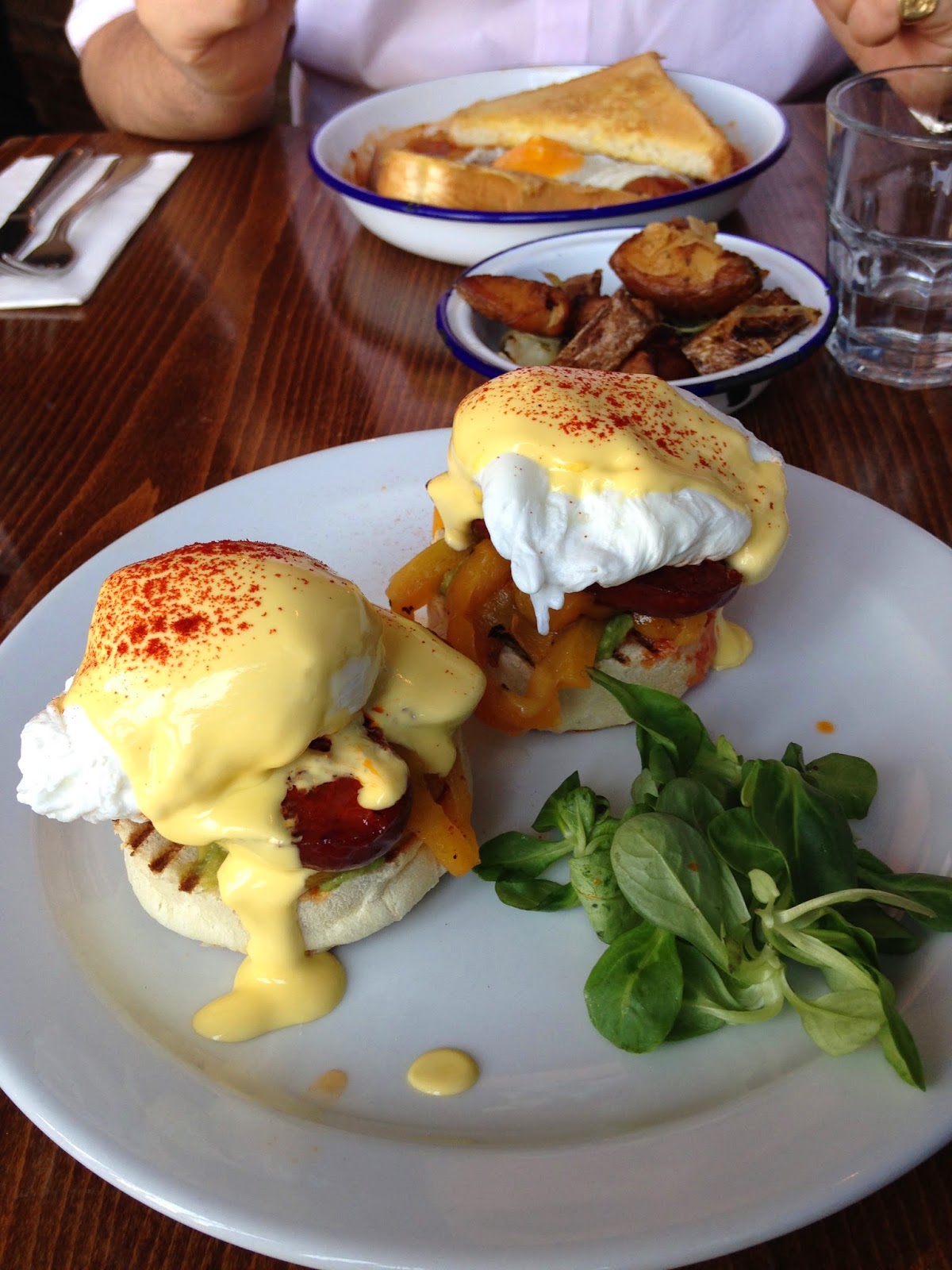 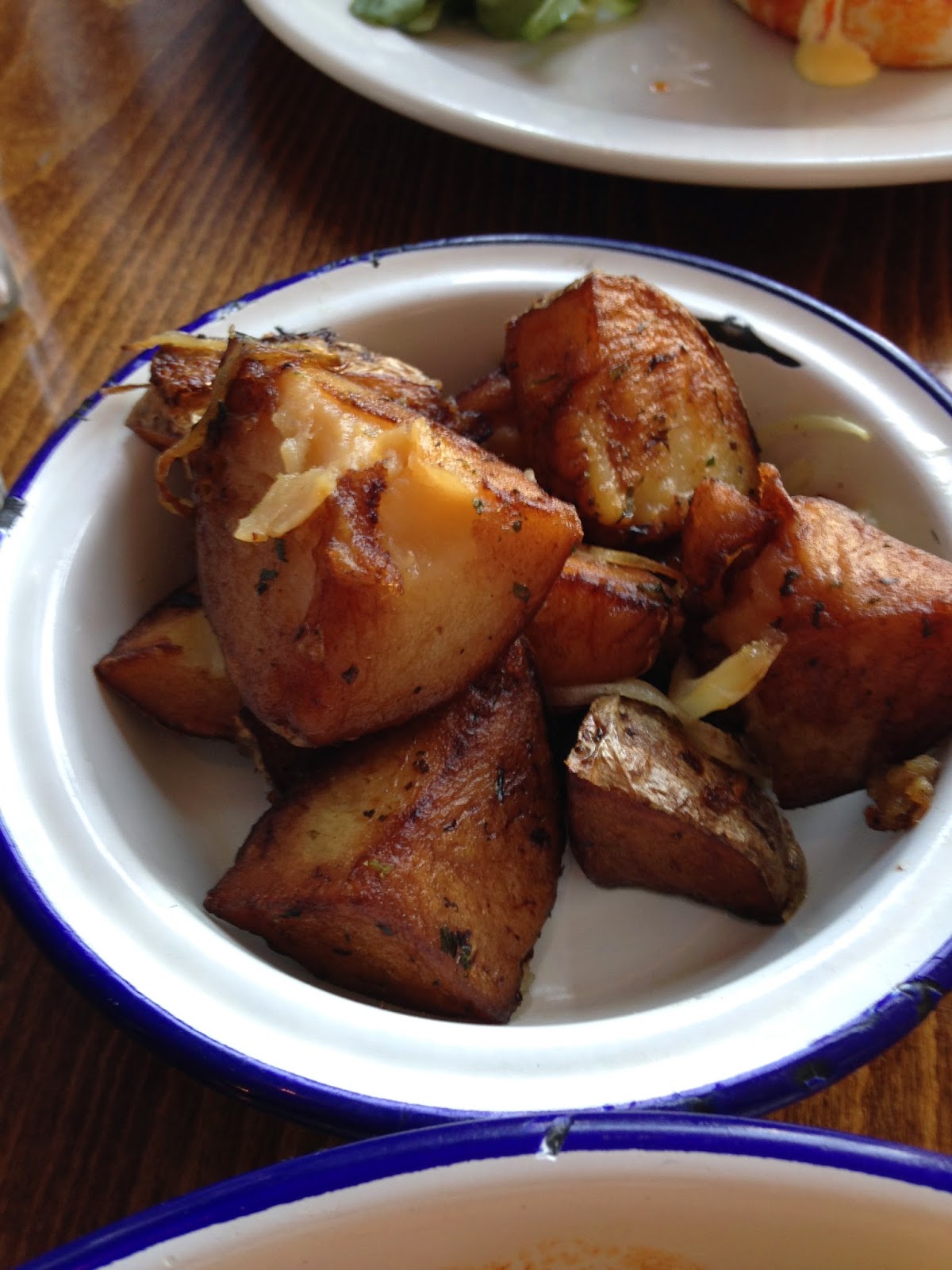 Oh, hang on what's this?  Yup, that would be a HAIR IN MY FOOD.  Not cool, Breakfast Club, not cool.  It's joked about a lot, but have you ever actually found a hair in your food?  I'm not sure that I have.  Or, at least, I hadn't until that day.  Sure, it was dealt with fairly well (swept away and replaced, albeit still charged for) but you know what's better than the chef leaving one of his black curly hairs in your food and then having it dealt with well?  Yup, that's right: the chef NOT leaving a hair in your food.

You remember the juice and coffees I mentioned?  You know, the ones where I said "more about them later"?  OK, so these arrived now.

This is an absolute pet hate of mine.  It's not that hard to get drinks out before food arrives.  Or, if it is, that's why I pay you to run a restaurant – and why I don’t, why I couldn’t.  So we had nothing to drink with the first half of our meal and a shed load to drink for the second.

On the juice front, if I'm honest, I have absolutely no complaints.  It was yummy – really, really yummy.  And, what's more, when you order a pitcher at the price of three glasses, rather than two glasses separately, I'm always afraid that will mean you get 2.01 glasses worth of drink.  Not here: there was a noticeable uplift from the quantity I could see other people got given in their single servings and the amount we got (and I am assuming this isn’t because we got forgotten).  So well done, Breakfast Club, you score points here. 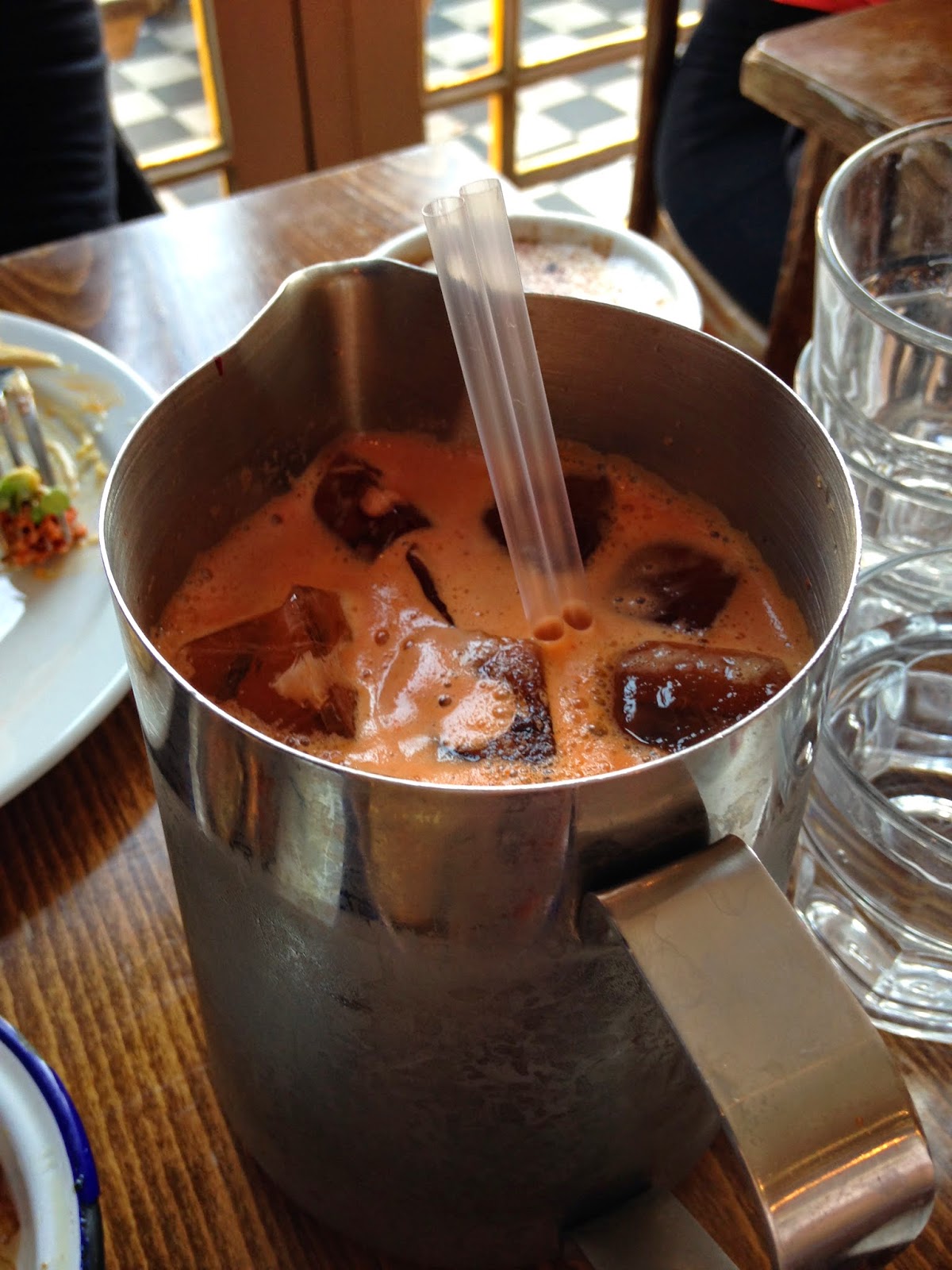 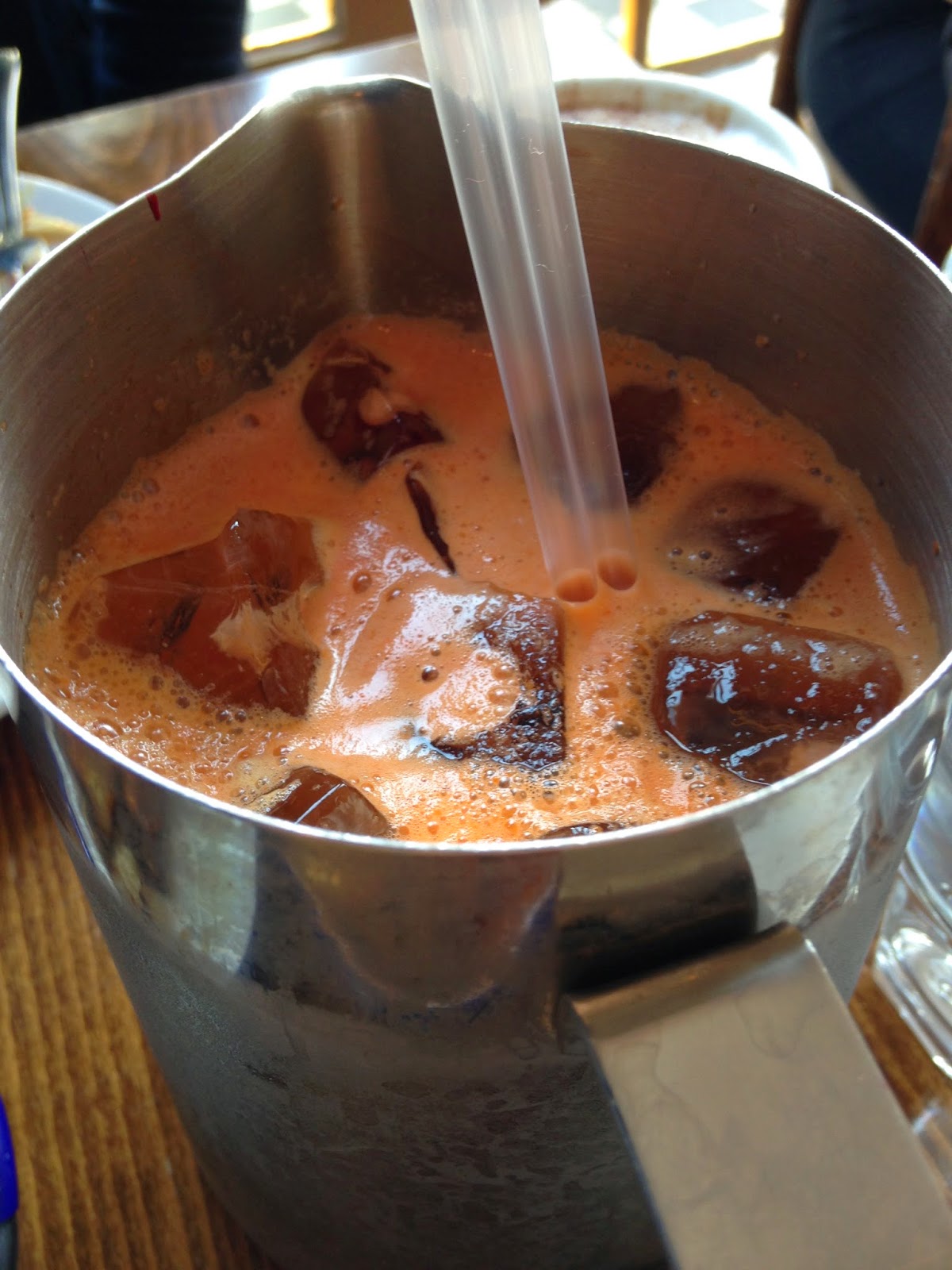 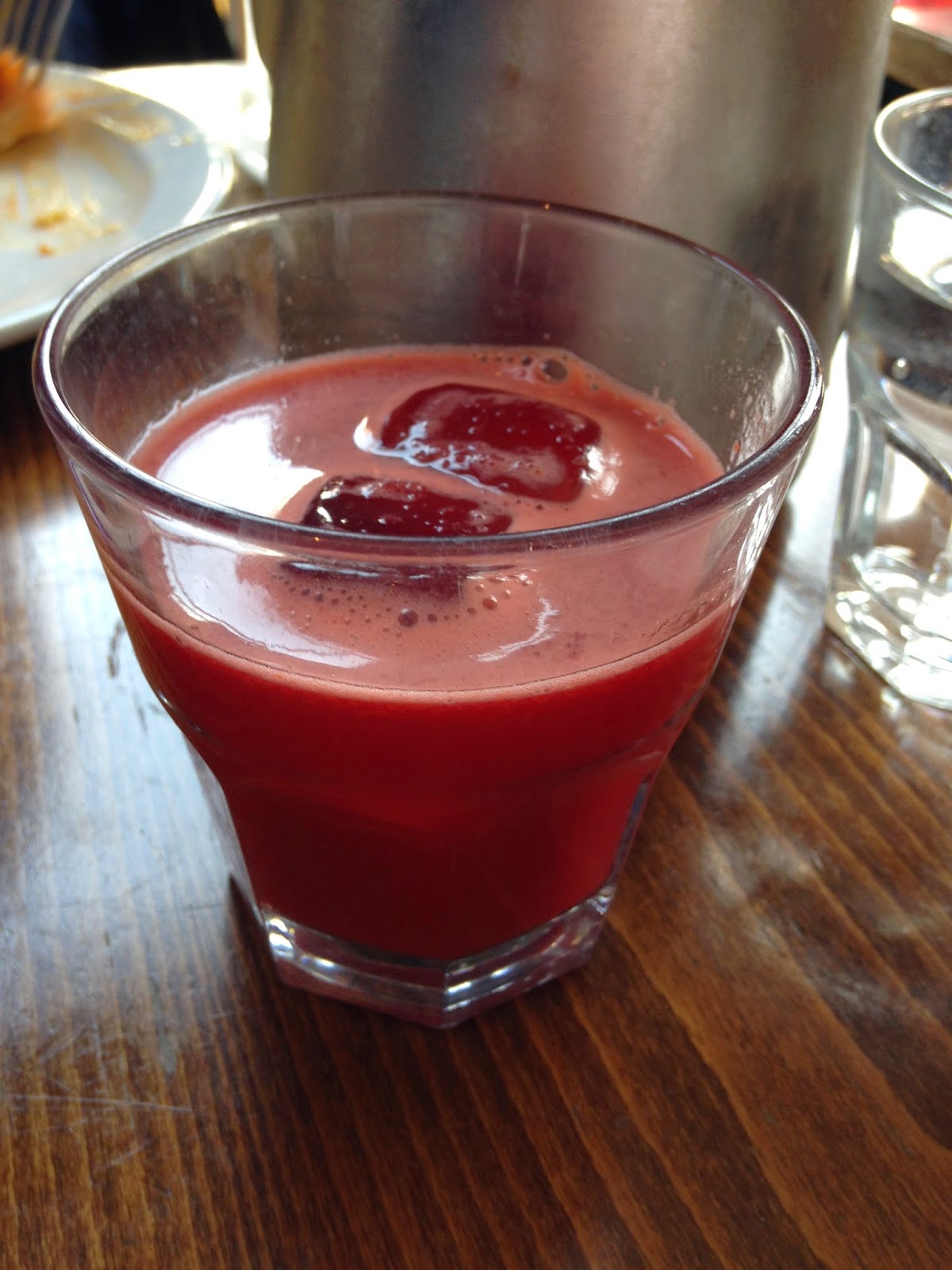 This is not a good review, I'm aware of that.  And I am sorry.  I never actually intended to write one of these.  You see, the thing is that blog-keeping is time consuming, and takes energy, and I wanted to do it to get away from negative things and to have a happy place.  So I decided from the outset that I wasn't going to deliberately write negative reviews – if I thought somewhere was pants, I just wouldn’t blog it.

PS: If you're reading this from Angel, and thinking about going to the Breakfast Club, can I heartily recommend The Elk in the Woods instead.  Or, alternatively, The Winchester is similarly jolly good and used to be extraordinarily good value.
Posted by Grubster Boy at 10:42