It is most definitely forced rhubarb season.

There’s something really funny – almost dirty – about the term ‘forced rhubarb’.  But it’s effectively the luscious, sweet-sour pink stuff that we all really know and love as rhubarb.  It’s in season from December through to February, so we’re kind towards the end of this year’s run – but it’s not too late to still grab some!

For me, each year, that means one thing: Rhubodka, a glorious fusion of vodka and rhubarb, making a delicate liqueur.  It’s spectacularly easy to make, as well (like most infused alcohol drinks, like sloe gin or damson vodka / gin). 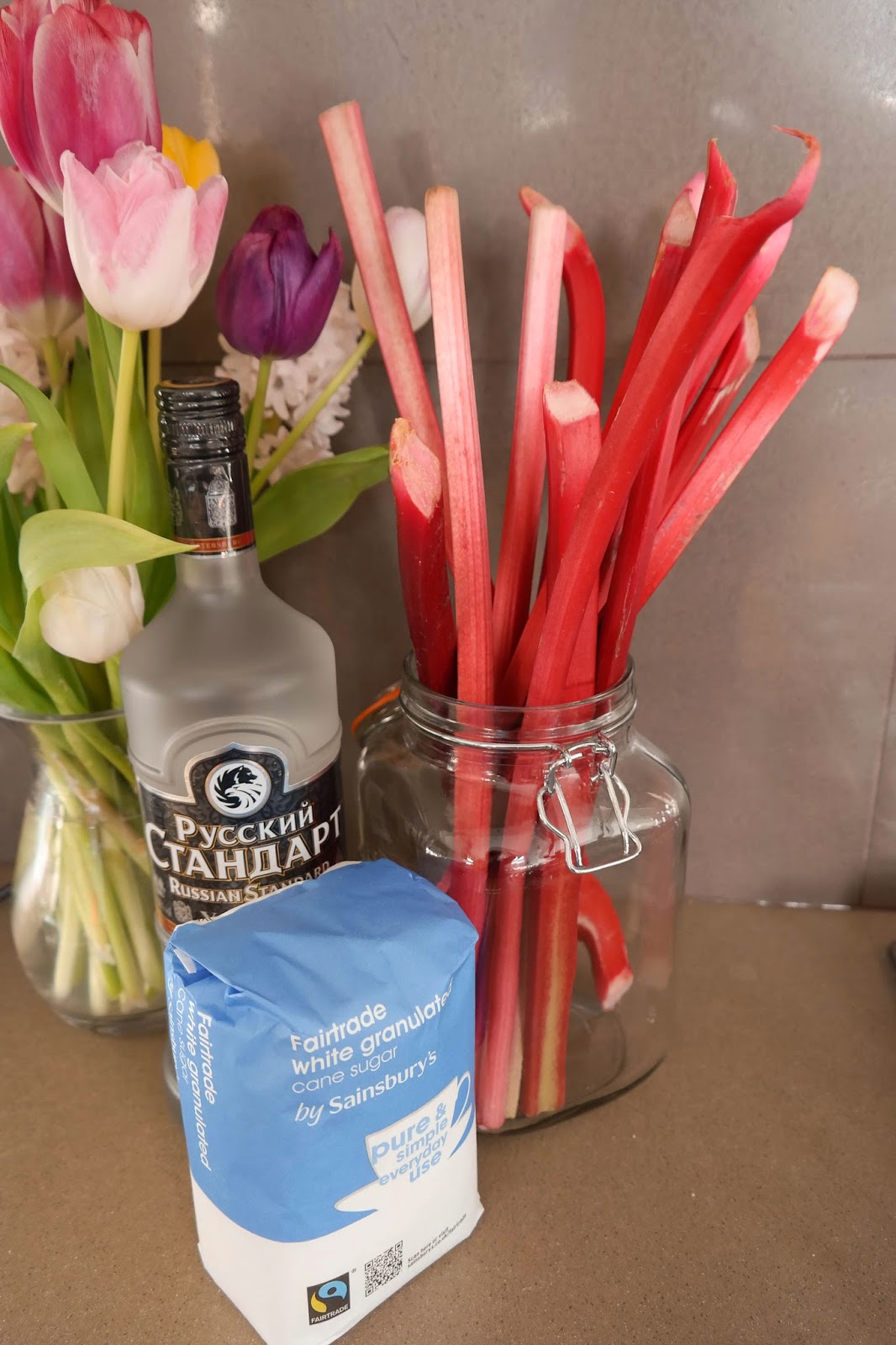 Just a quick note on how to buy rhubarb: I could wax lyrical about this stuff all day, but I won’t (count yourself lucky).  It’s fantastic stuff (Is it a fruit? Or a vegetable? Or, even, a salad?) and should be treated well.  Just a follow a few rules: get bring, pink, healthy looking stalks, preferably from Yorkshire, which is the Mecca of rhubarb.  Also, the more spindly the stalk, the more pink there is in proportion to the rest of the fruit – which means the more of a beautiful, delicate pink colour the liqueur will end up. 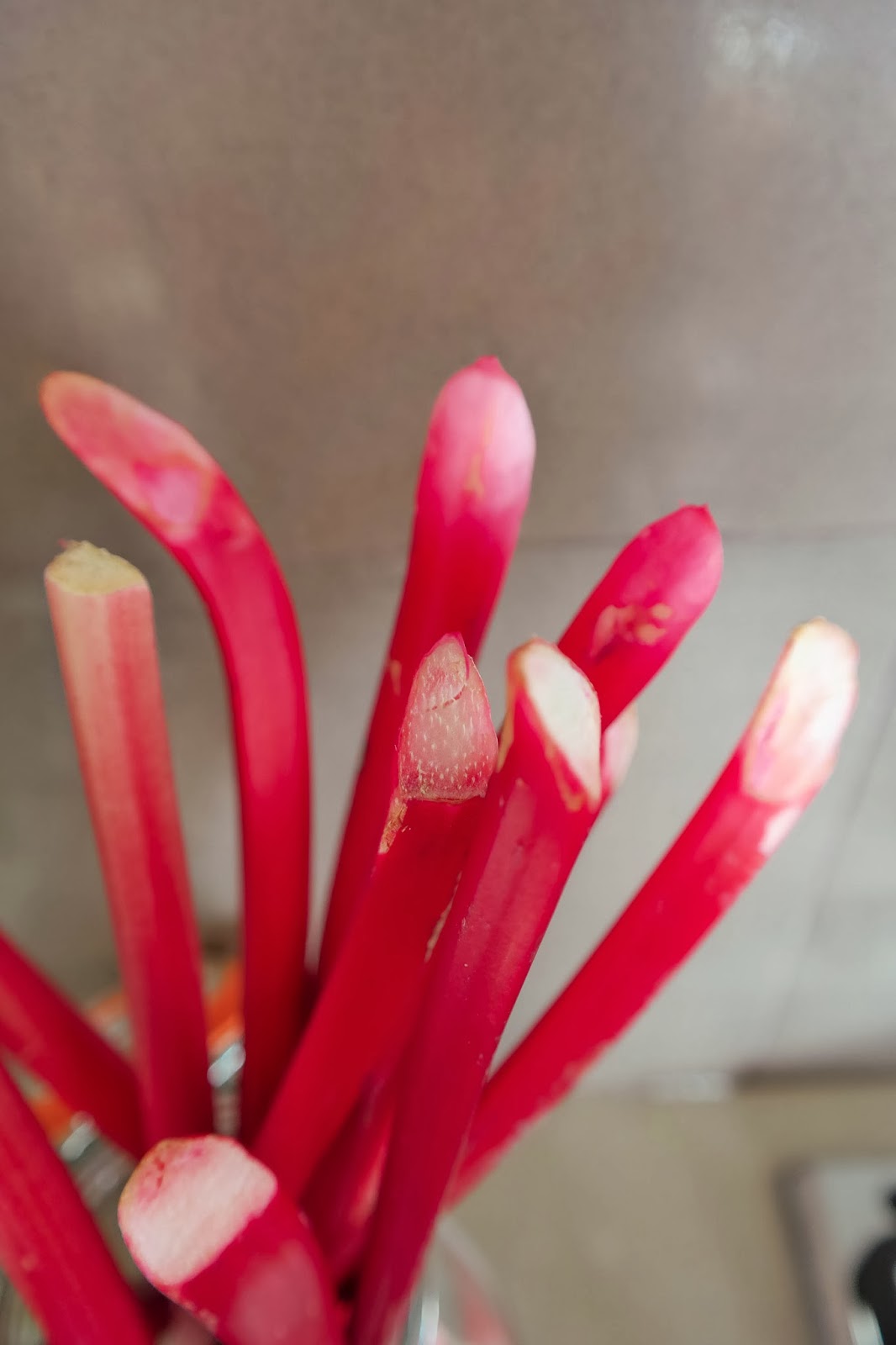 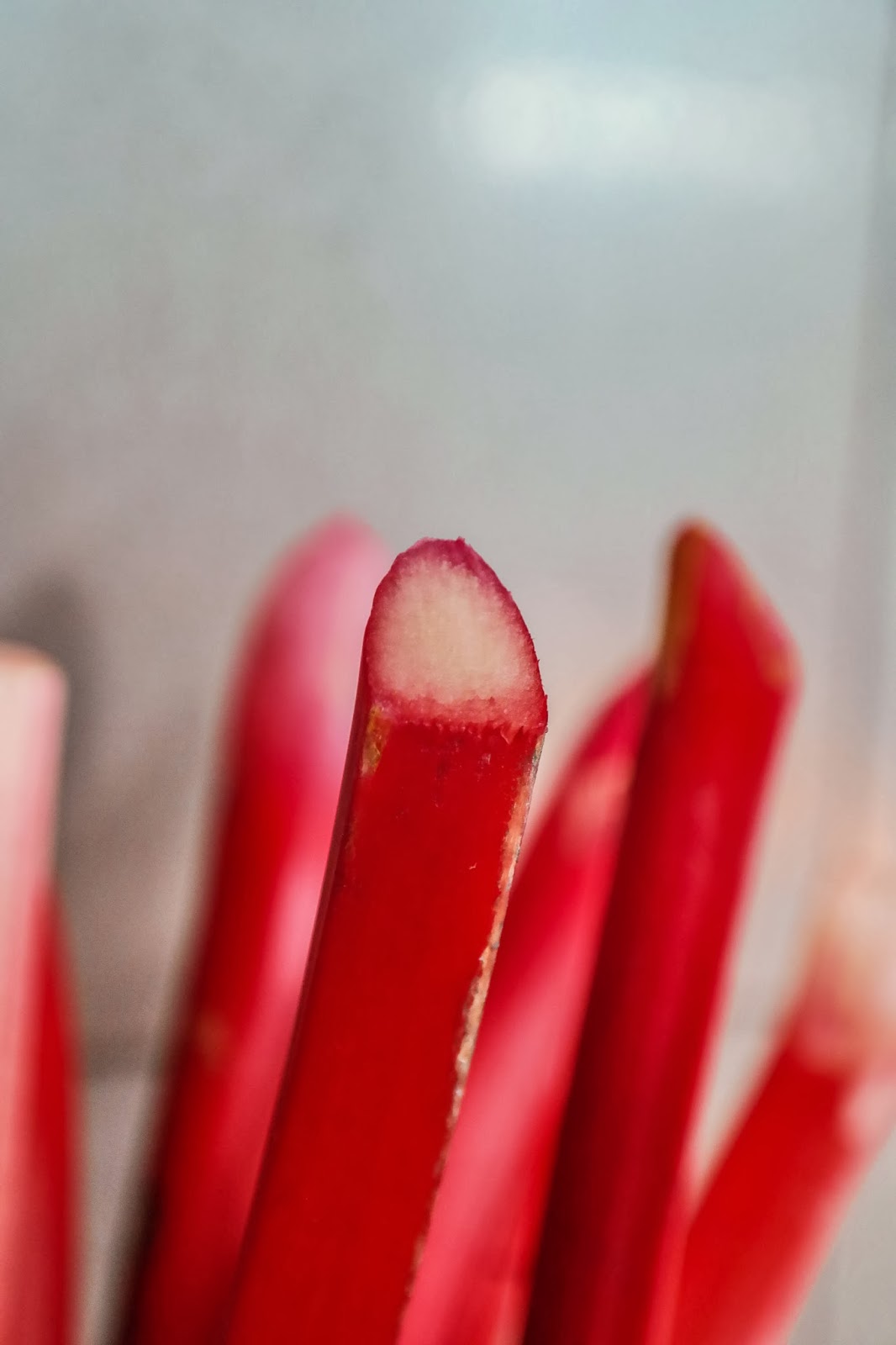 Oh, one thing: Don’t eat the leaves.  They contain oxalic acid, which is toxic.

1. First, sterilize your jars – wash them thoroughly in warm, slightly soapy water, then leave them to drip dry for half an hour in the oven at 130-140°.  Get them out (wear oven gloves) and let them cool right down.

2. Wash the rhubarb thoroughly, and then chop it into chunky chunks. 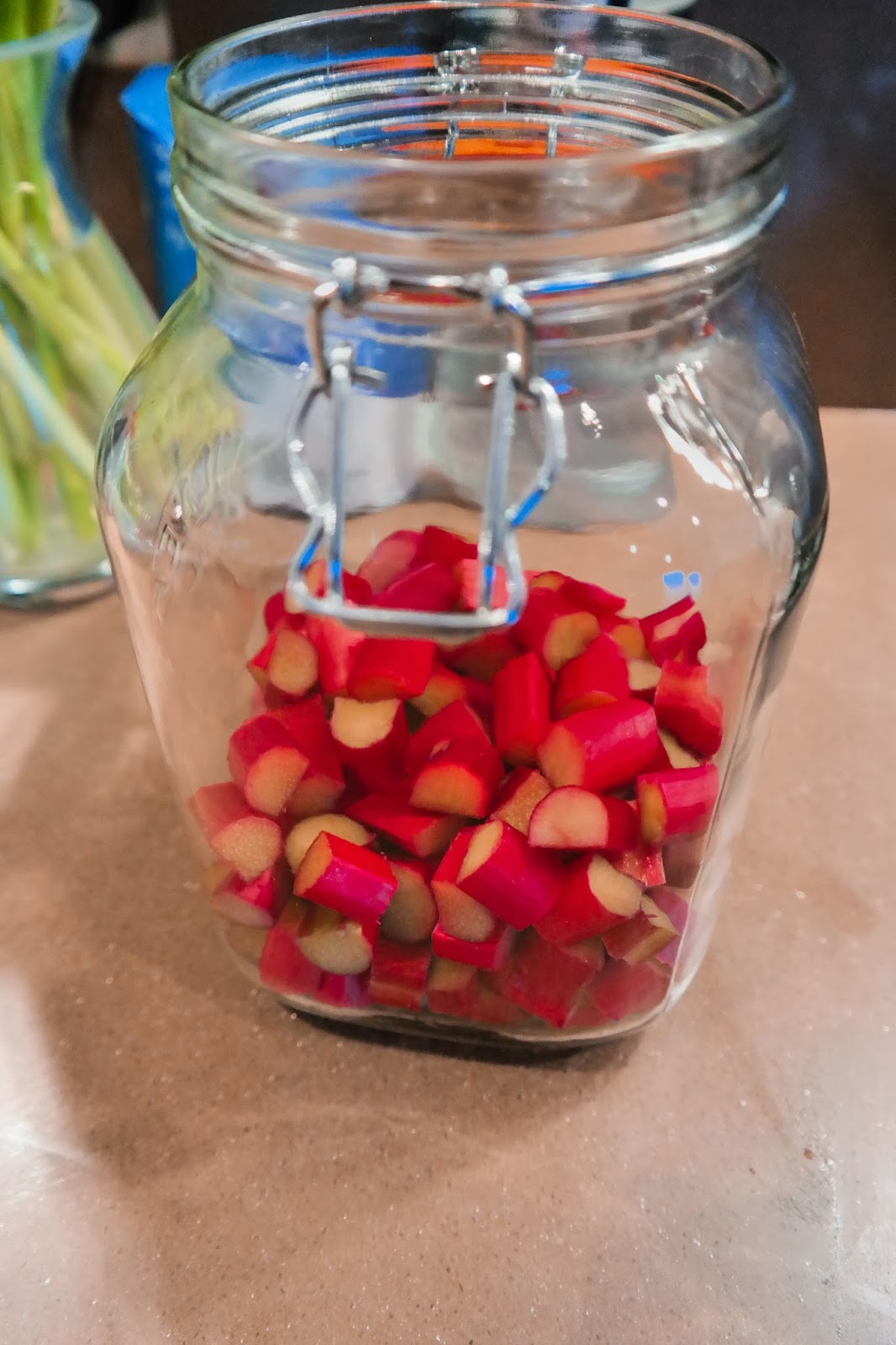 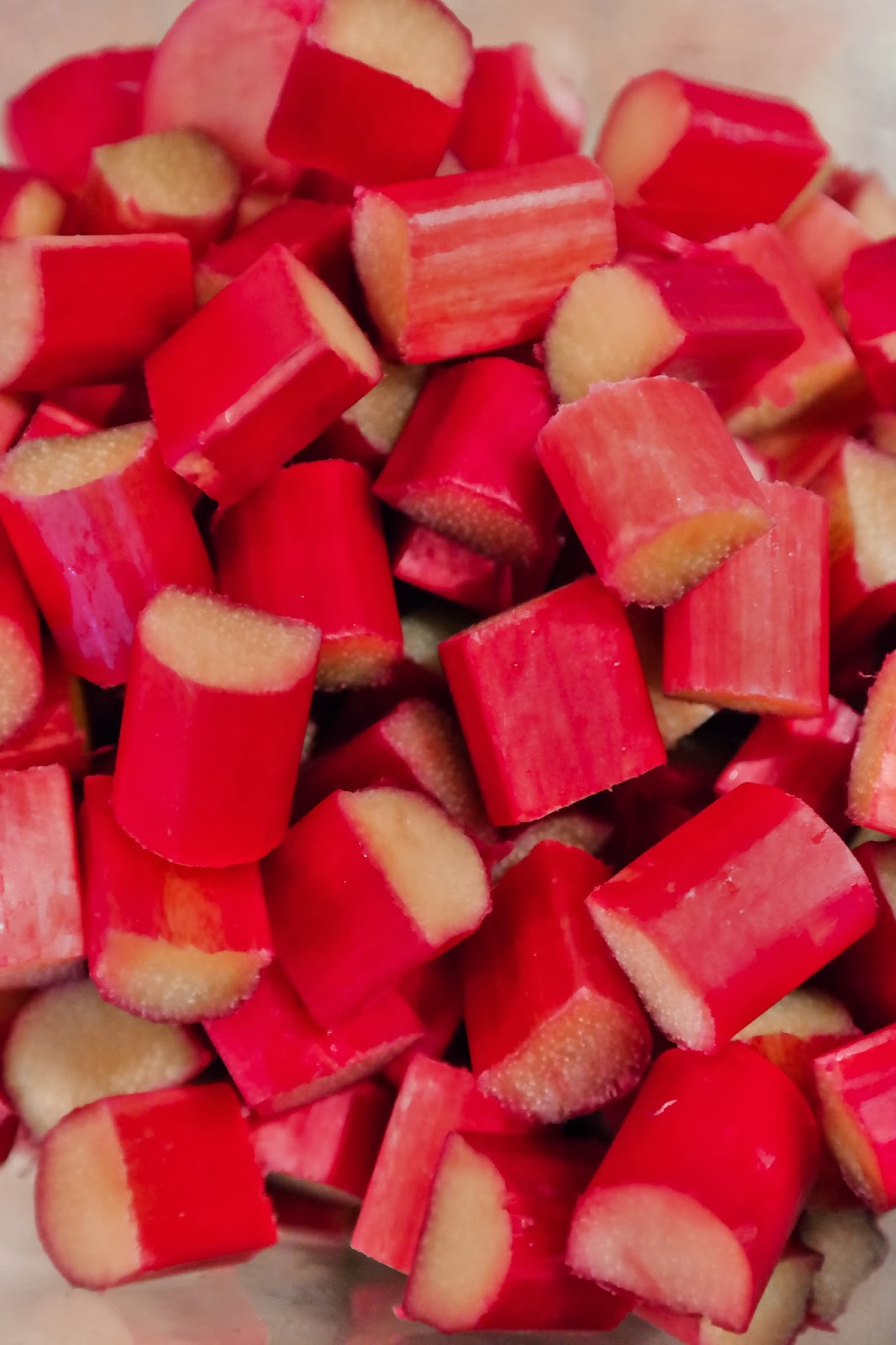 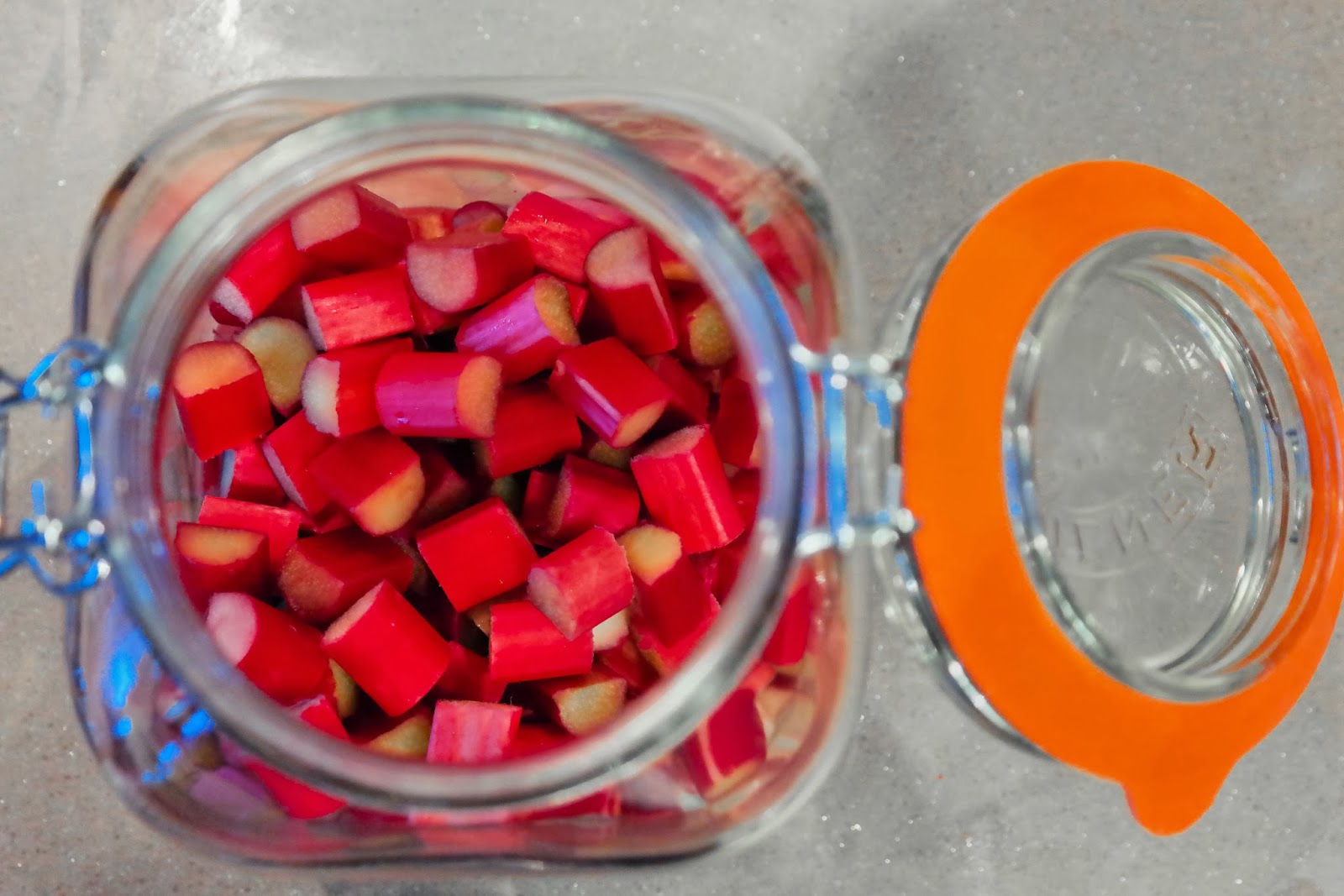 3. Chuck the chunks into the jar and, using the end of a rolling pin or something similar, roughly crush the rhubarb chunks.  You’re not looking to totally macerate them, just mess them up a bit to release some of the juice and maximize the surface area for the vodka to interact with. 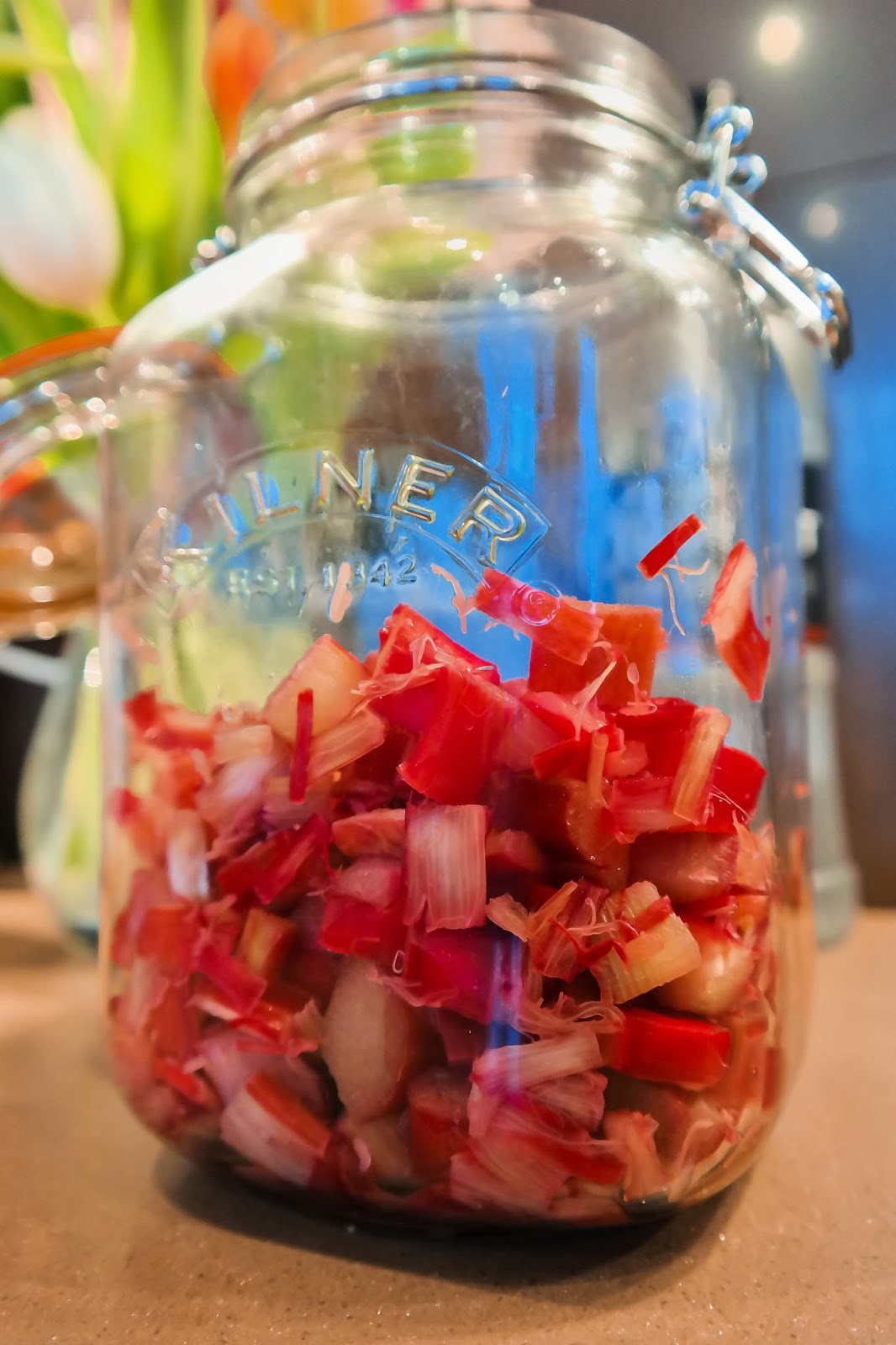 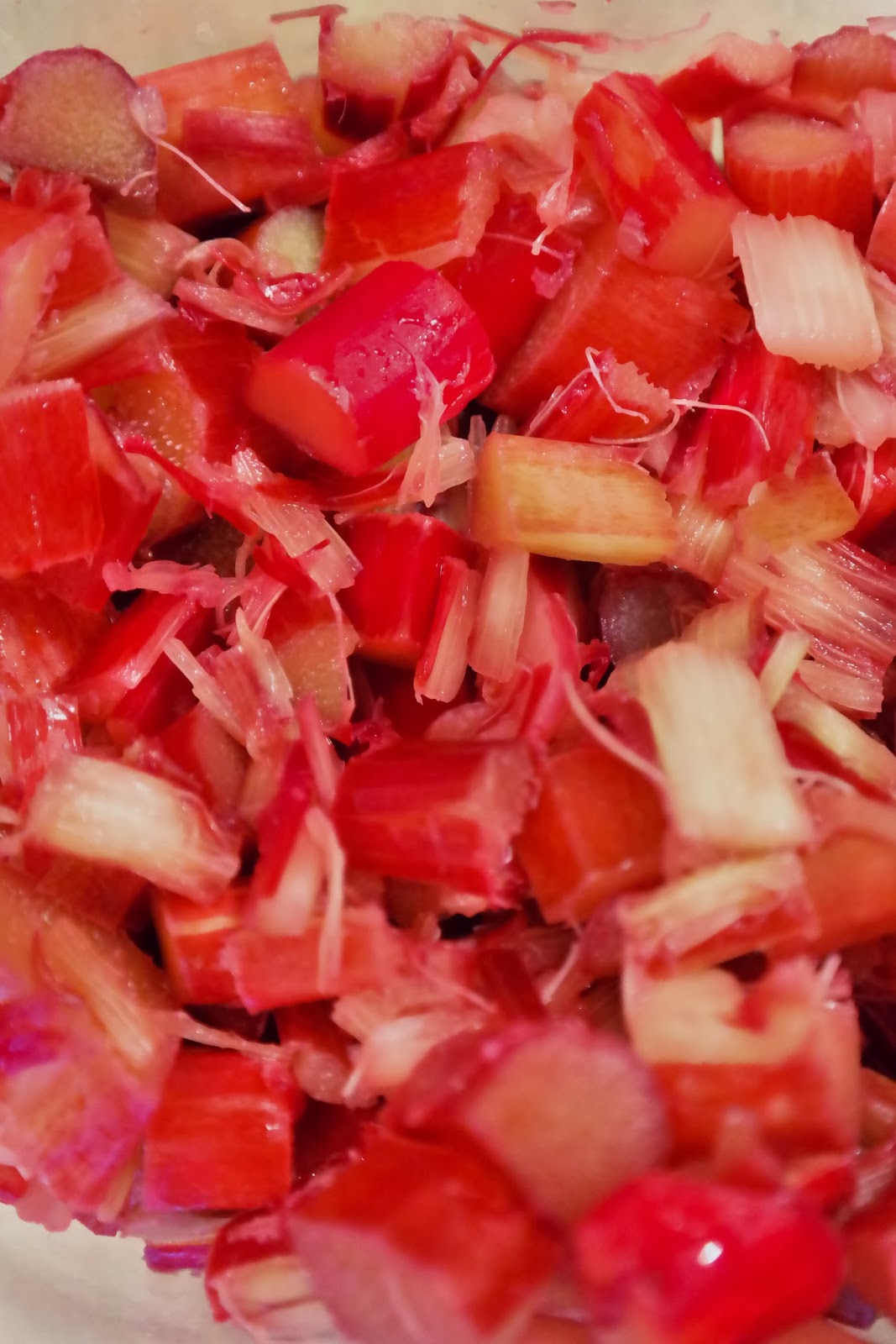 4. Add the sugar, close the jar, and shake like billy-oh.  Make sure that the sugar and the fruit are really combined. 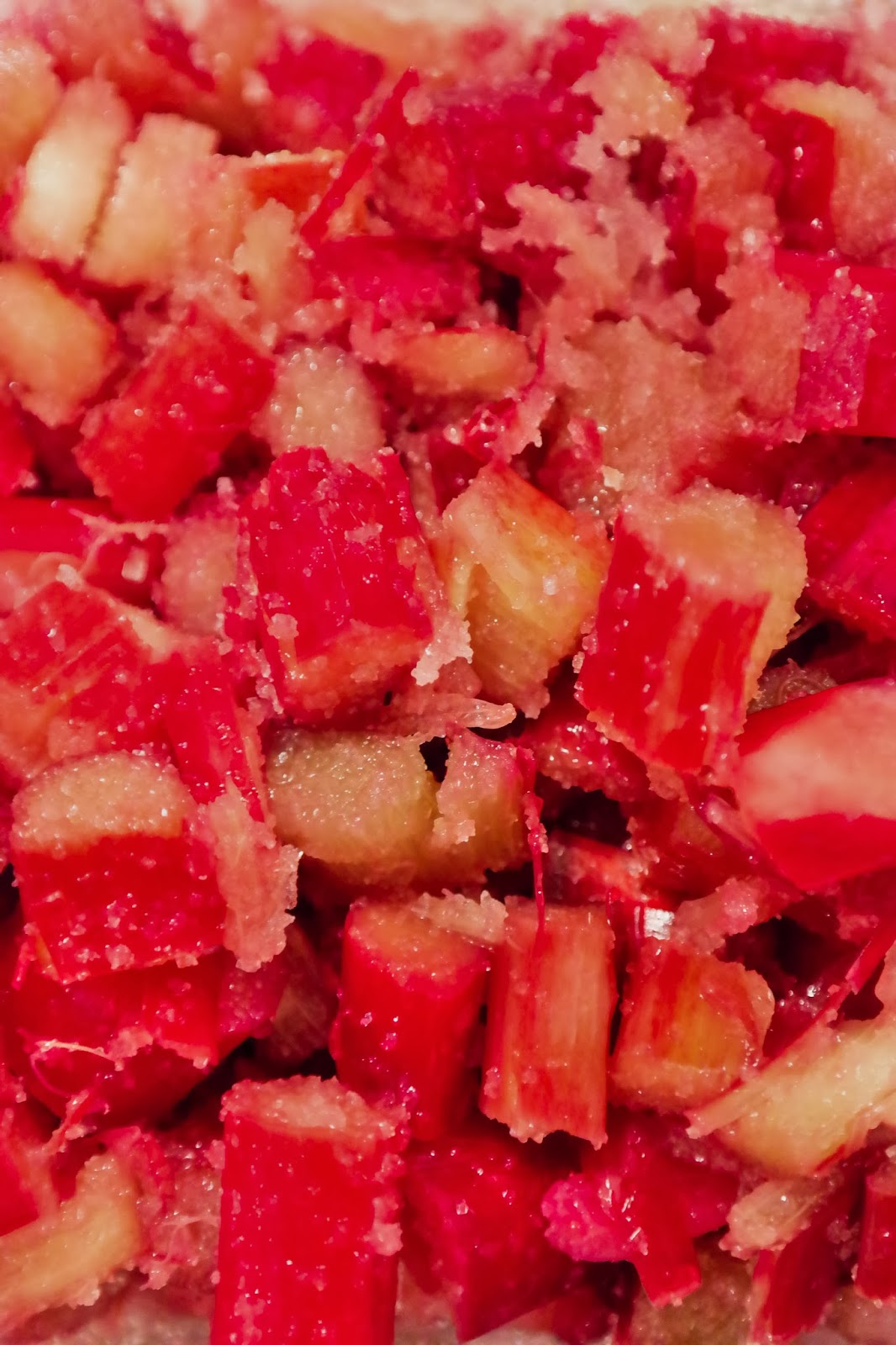 5. Add the vodka, close the jar up tight again, and shake again. 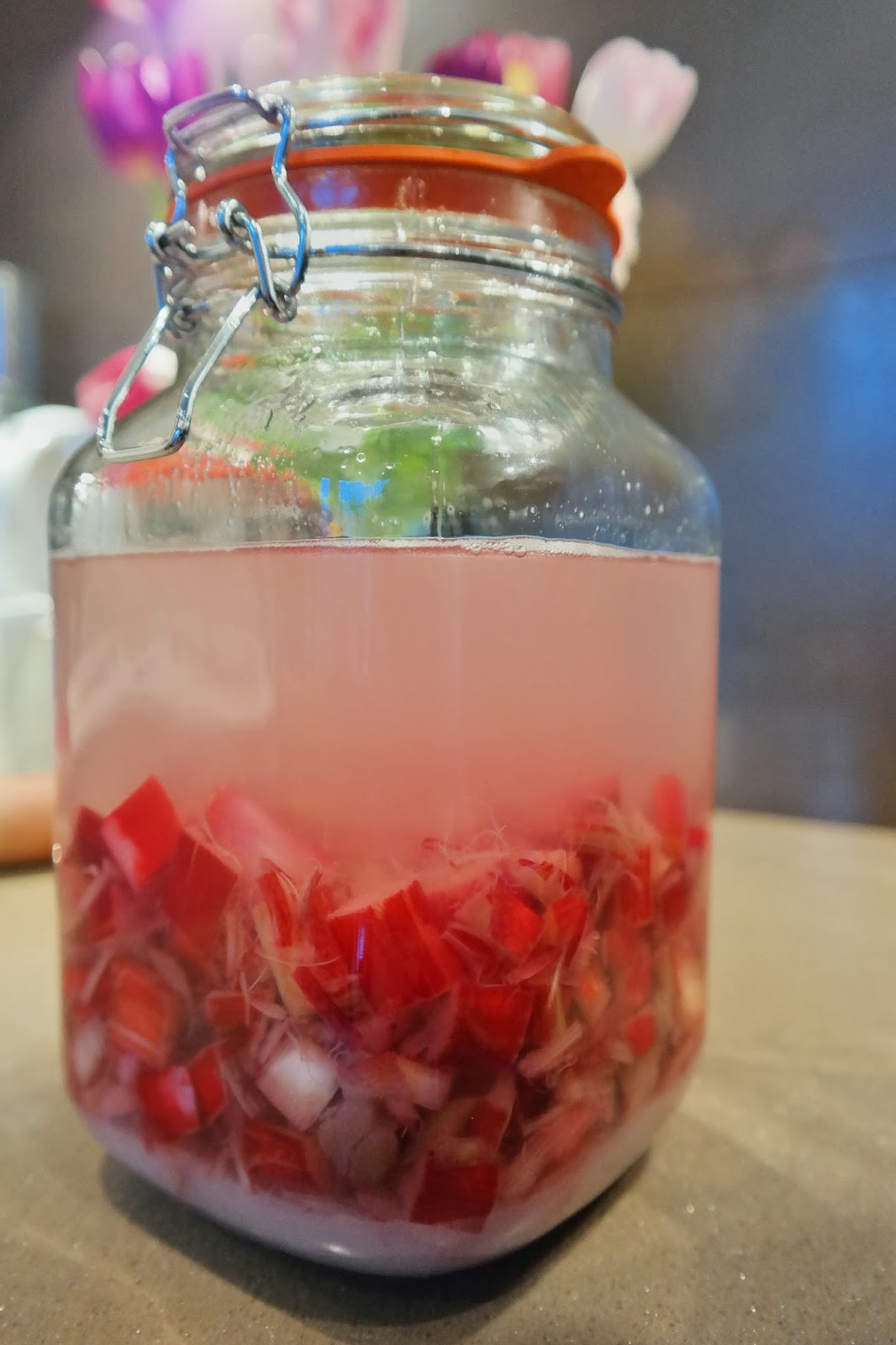 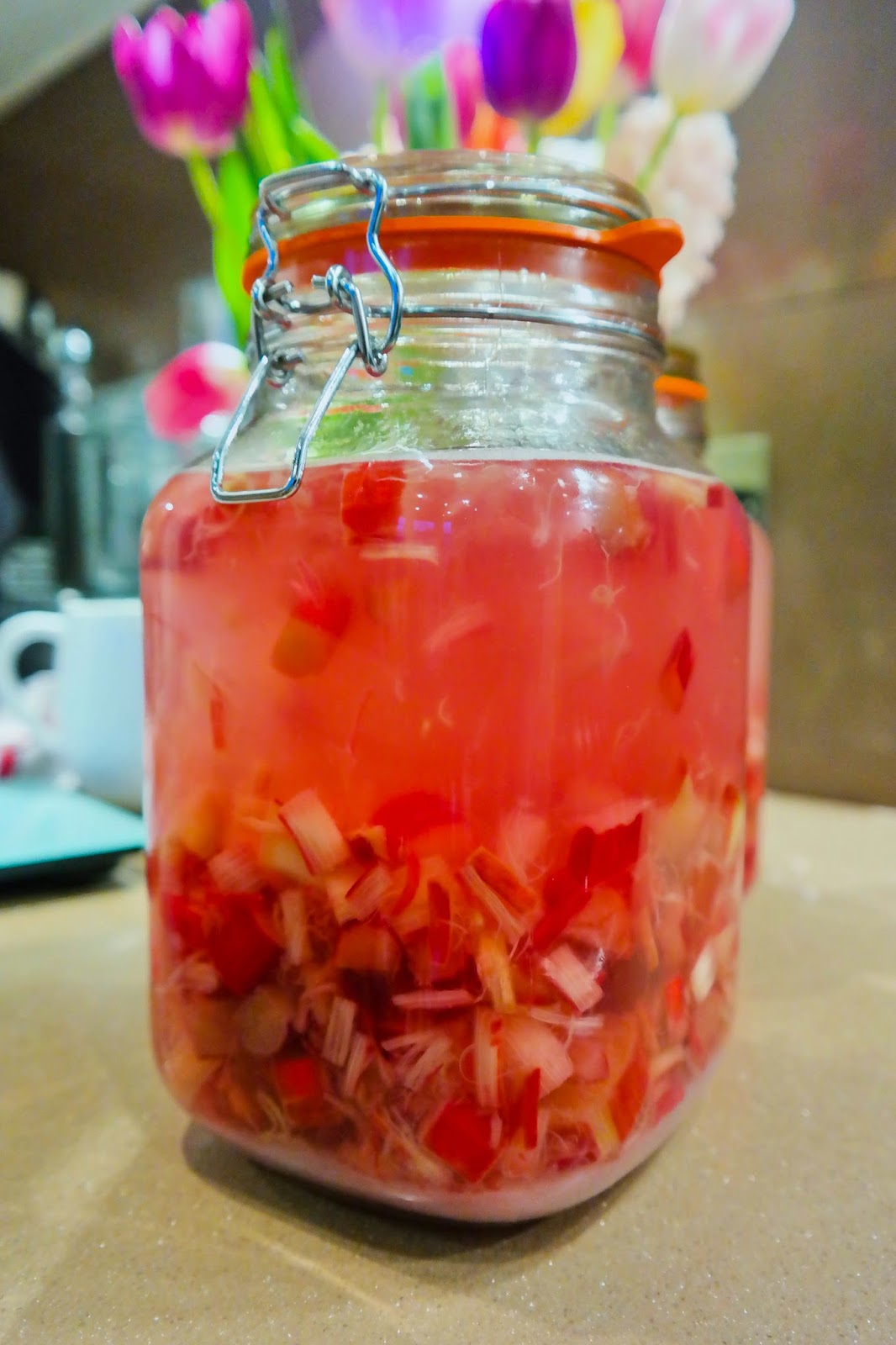 6. Keep shaking every day for the first week or so.  Then you can take it easy, provided that all of the sugar has dissolved into the liqueur.  Leave the mixture for about 3 months, then strain.  Fortunately, this is one of those mixtures that, because there is no seed or pith in rhubarb, leaving it too long is unlikely to cause a massive issue.  Also, it’s much, much quicker than the sloe or damson mixtures – it can be drunk immediately it’s strained, and can even be strained sooner than 3 months if you’re desperate. 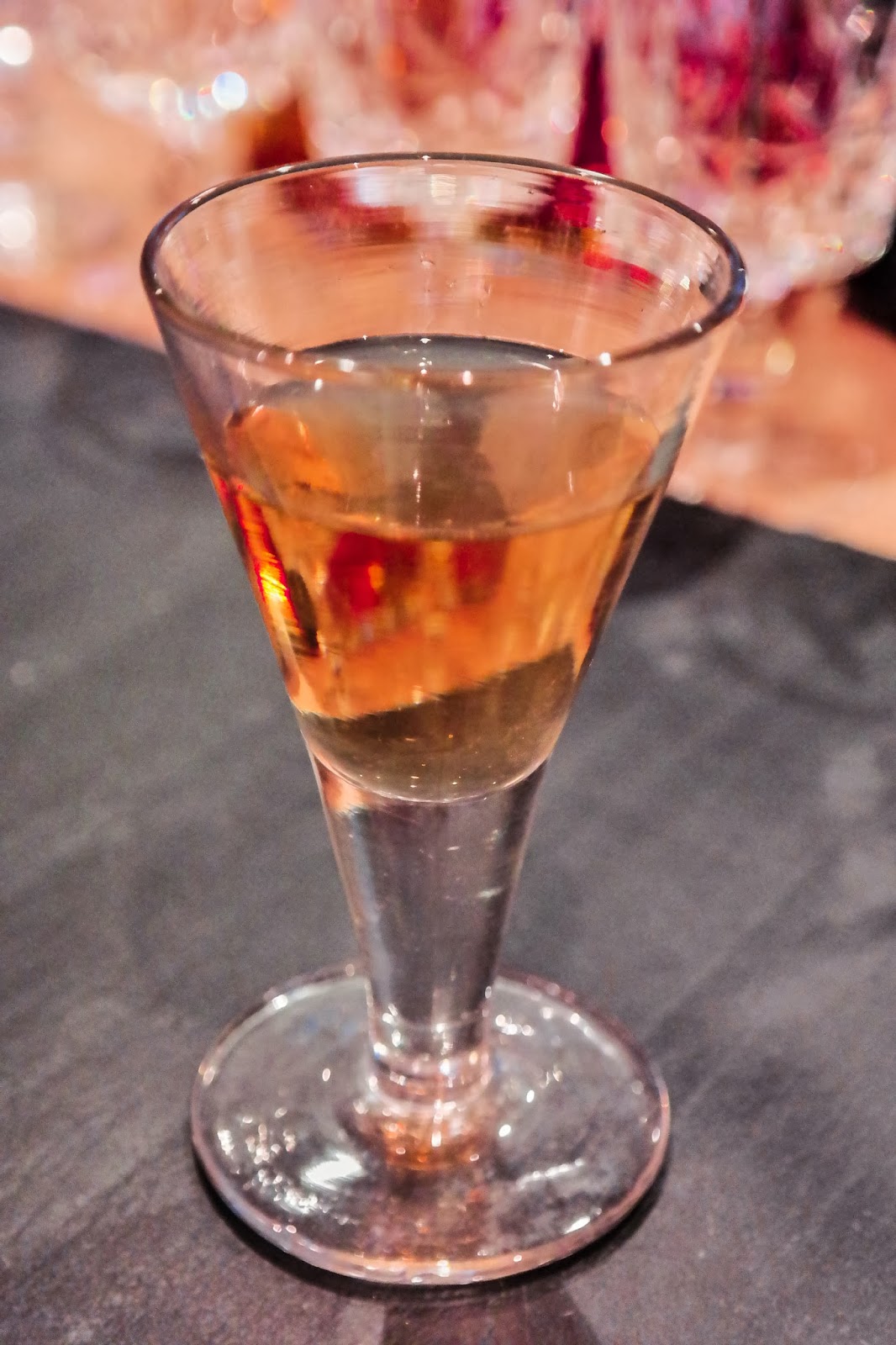 Drink straight, over ice, or with tonic water in a 3:1 ratio.  You can vary the recipe as well – it works well with a half-thumb-sized bit of peeled root ginger, sliced and mixed in.  Or, alternatively, throw a couple of sprigs of rosemary in there and see how you come out.

But, most of all, enjoy.