First things first, let’s be totally honest here: this is a recipe pinched straight off The Kitchn's Faith Durand, whose Braised Coconut Spinach and Chickpeaas with Lemon is heavenly.  It also has the advantage of being (a) healthy (very much so, or at least very much so in the context of the other stuff I tend to cook); (b) easy peasy lemon squeeze; and © suitable to feed to a vegetarian if you're pushed to do so.   All I've done with the recipe is play with the quantities a touch and converted them to UK weights and measures.

Faith recommends eating it with a baked sweet potato, which sounds nice enough, except that I like roasted sweet potato mash very much.  I also ate the leftovers with basmati rice, which worked pretty well too.  Next time I make it, I'll try it with wild rice - I can't help but feel that a little extra bite to this would be a good shout. 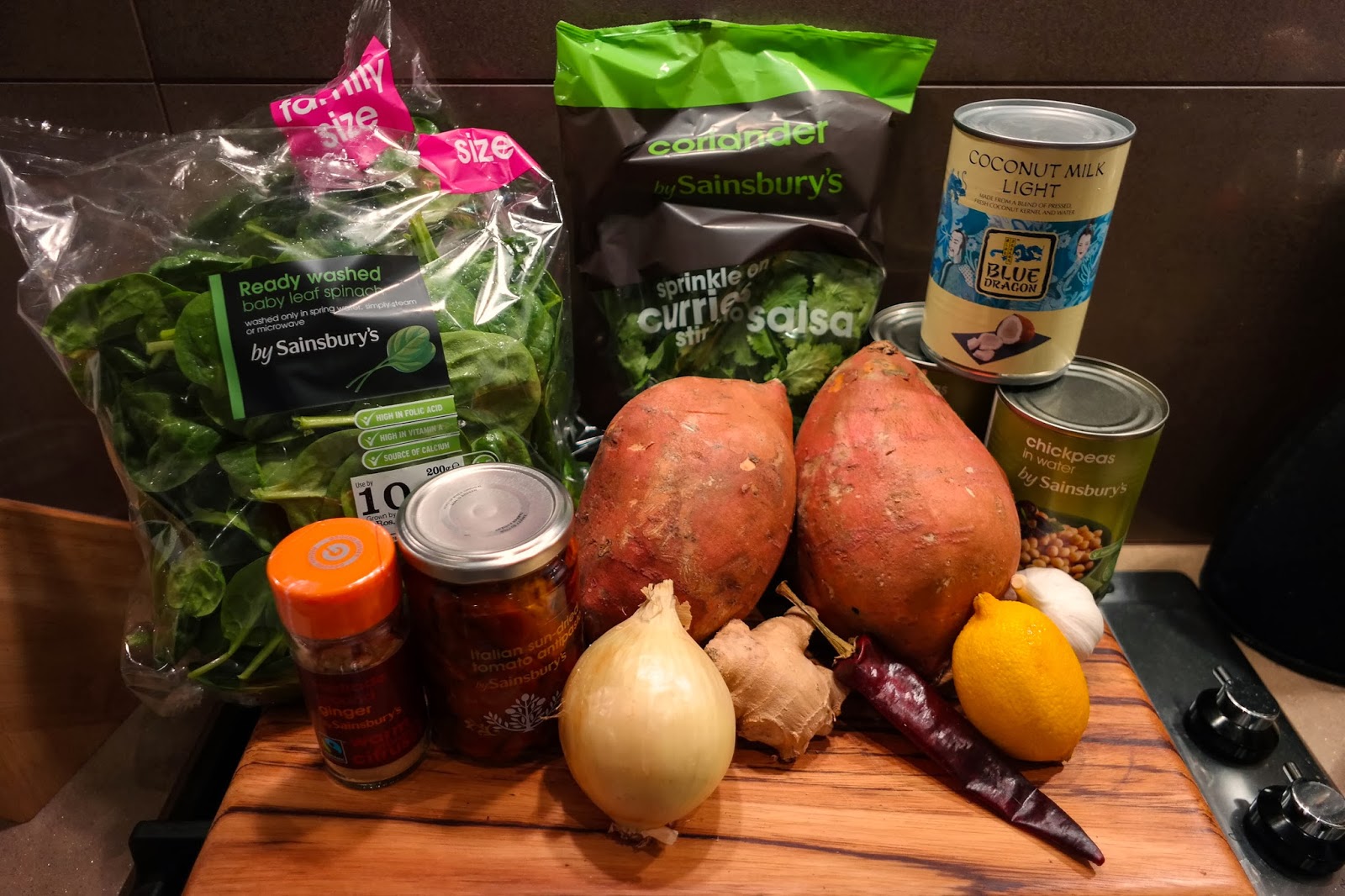 Olive oil
1 yellow onion
4 cloves of garlic
Thumb-sized piece of root ginger
1tsp ground ginger
250g sun dried tomatoes
1 lemon
1 dried chilli (hot)
800g chickpeas
2 big bags of baby leaf spinach (About 400g)
400ml coconut milk (Although not the healthiest thing, coconut milk can also be bought in a 'reduced fat' form, which I think tastes just as good and is slightly better for you.)
100g coconut shavings
Handful of coriander
Two big sweet potatoes (Basically half a sweet tat tie per head, based on the size we had - so just pick enough for everyone to have what they want)
Smidgen of butter
3 garlic cloves

1. Get the oven on to 170°C.  Peel and chop the sweet potatoes up into inch-sized chunks and chuck them in a large, ceramic roasting dish.  Don't peel the garlic but crack each clove it under a heavy knife.  Douse with olive oil and season liberally before sticking the whole dish in the oven, stirring every so often.  They'll need the best part of an hour, until they're soft and sticky, with nice blackened edges. 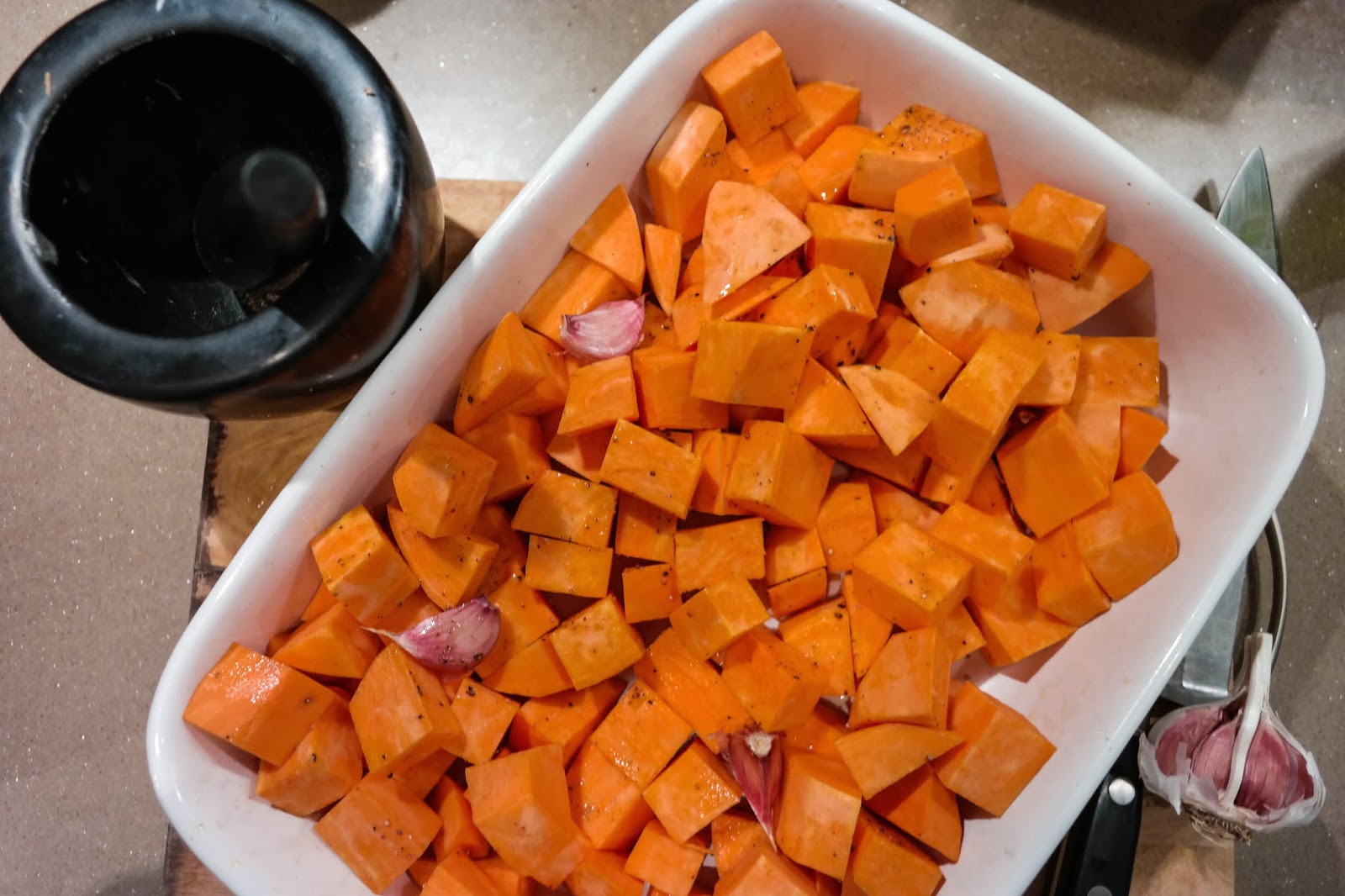 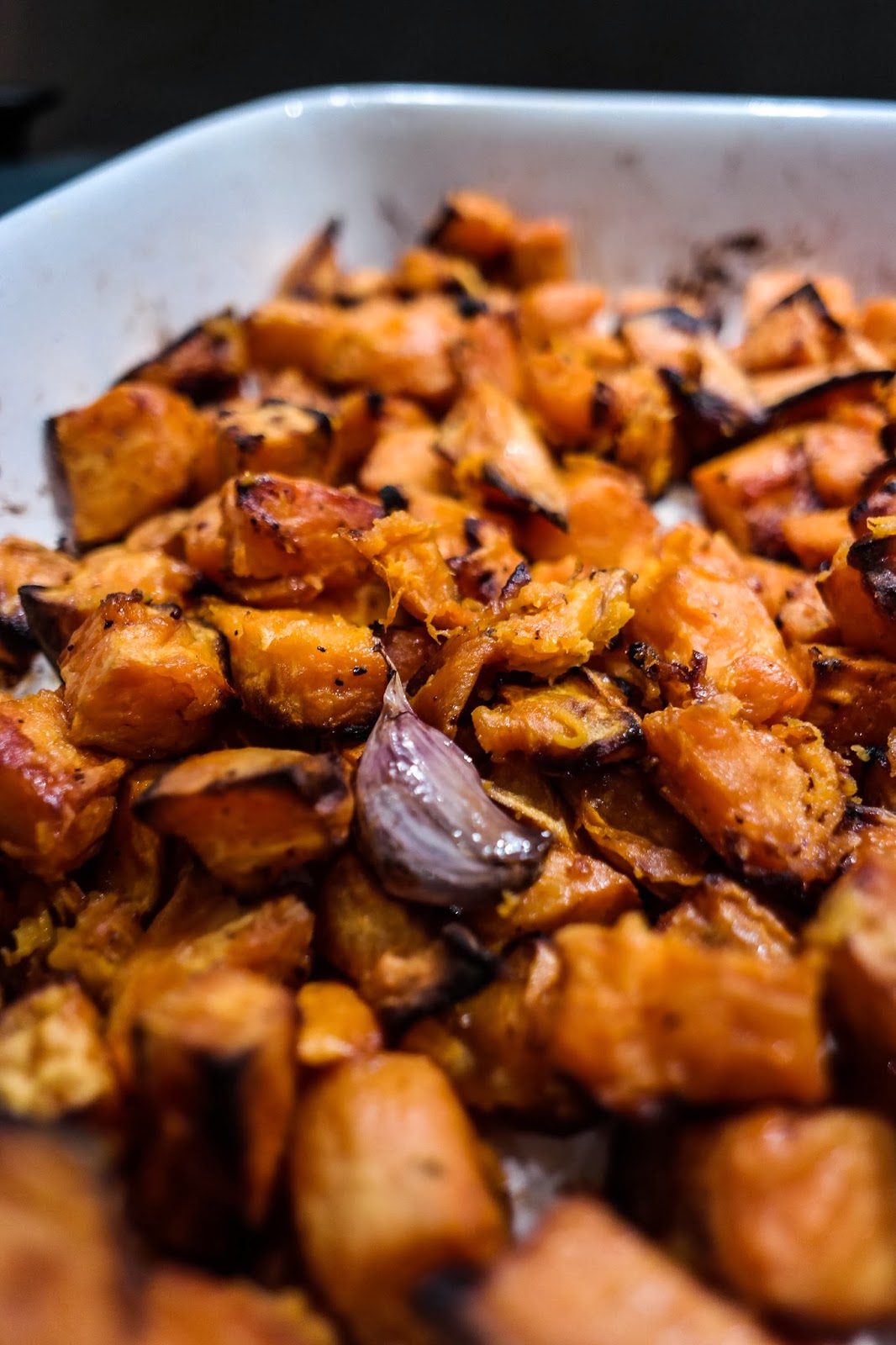 2. Boil a kettle and pop the chilli in a mug full of boiled water.  In a large cast-iron casserole dish get some oil heating on a low heat whilst you chop up the onion finely.  Add it to the dish and allow it to soften.  Whilst softening, zest the lemon, crush the garlic, grate the ginger, dice the sun-dried toms and extract and chop up your chilli pepper (if you don't like it hot, discard the seeds now).  When the onions are soft, add the whole lot and cook the mix off a bit, increasing the heat to medium.

3. Drain the chickpeas then add them to the pan, and stir them into the whole mixture.  Cook them until they start to turn golden as they toast. 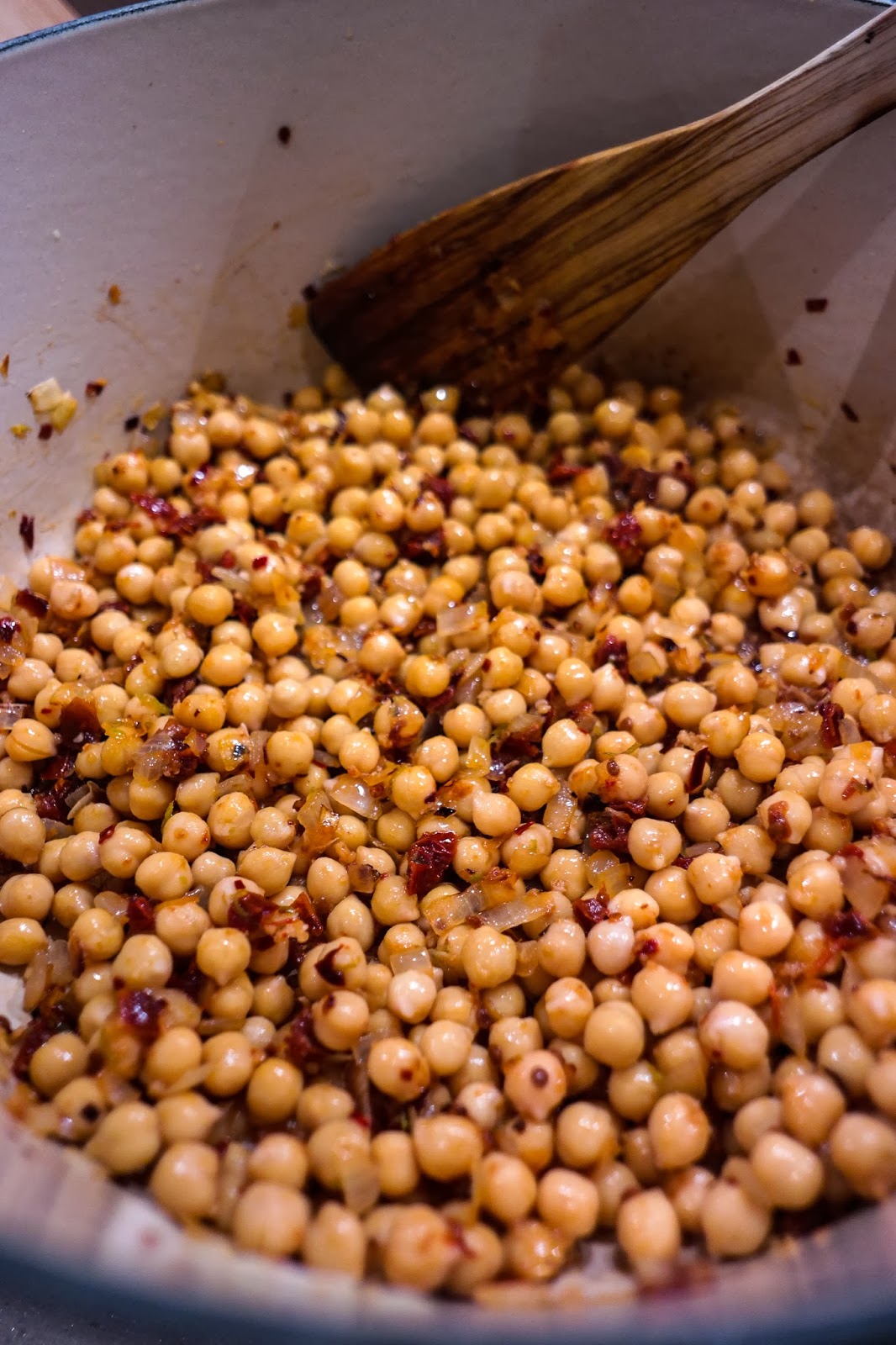 4. Throw in an entire bag of spinach.  it'll look ridiculous, but this is spinach and in a few minutes it'll have wilted to next to nothing as you stir it in.  Time to add bag number two, and repeat. 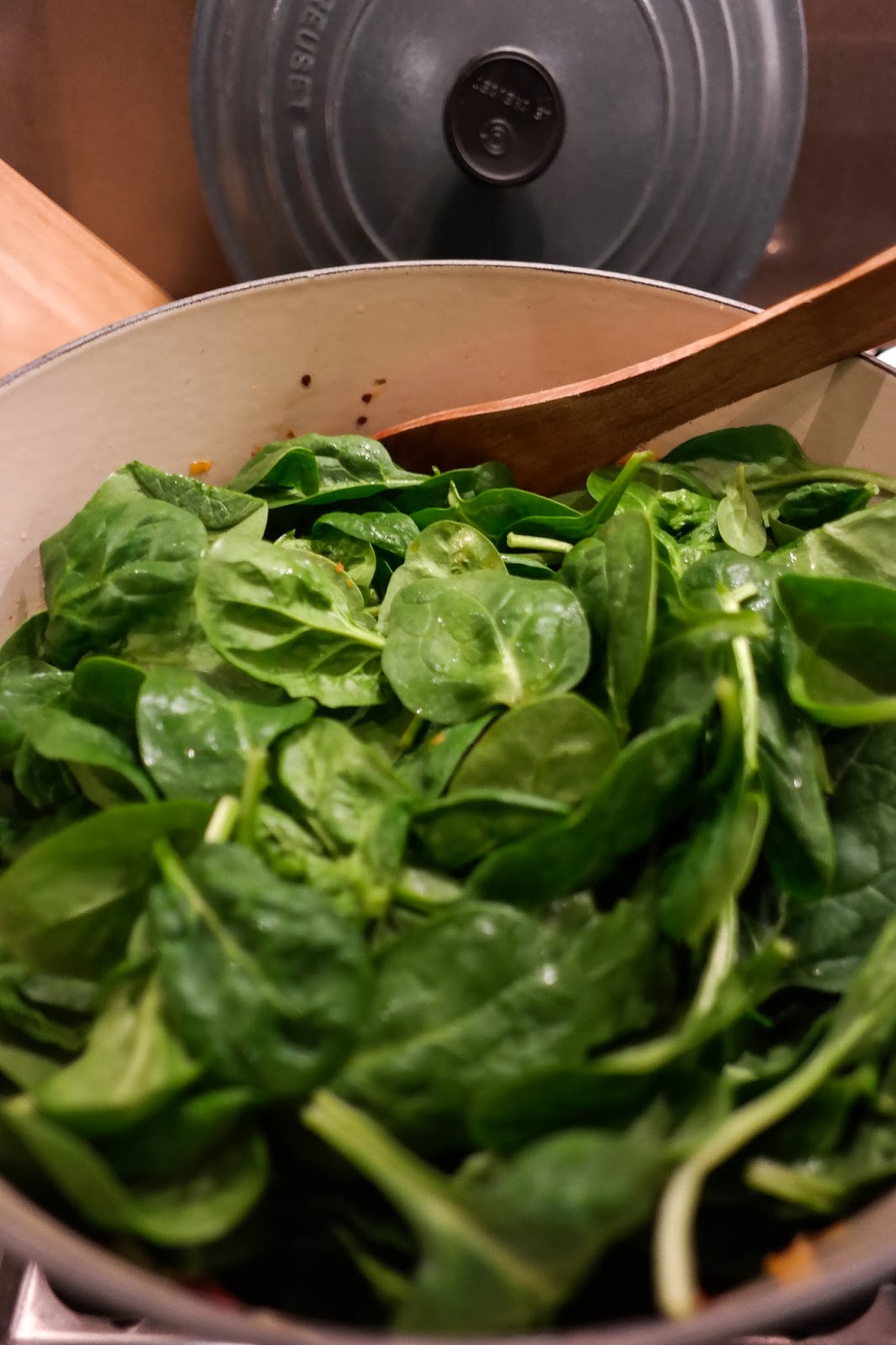 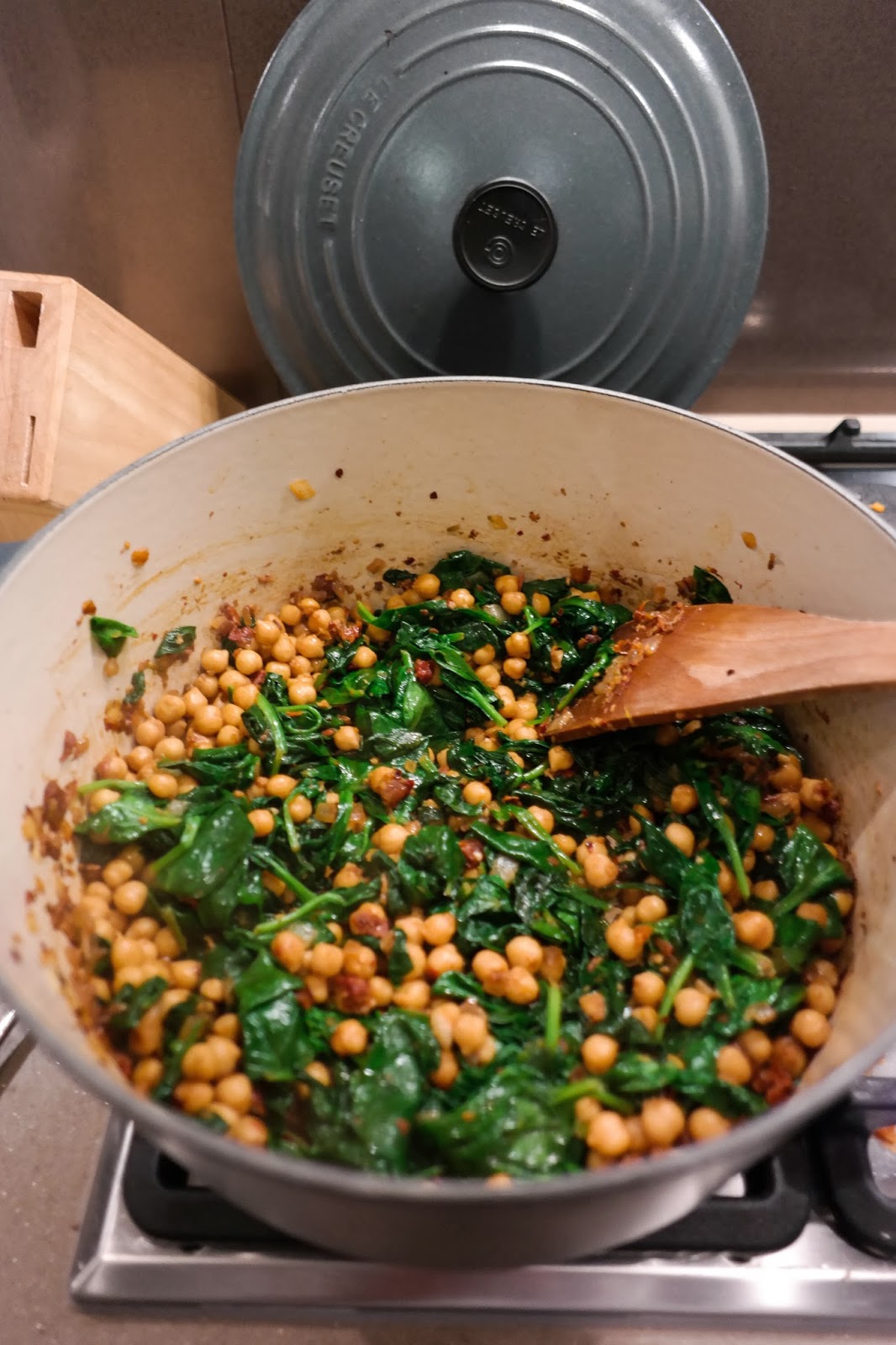 5. When it's all wilted down, add the ground ginger, coconut milk and the juice of the lemon.  Season to taste.  Bring it to a simmer and cook off for 10 minutes, so that it thickens a touch. 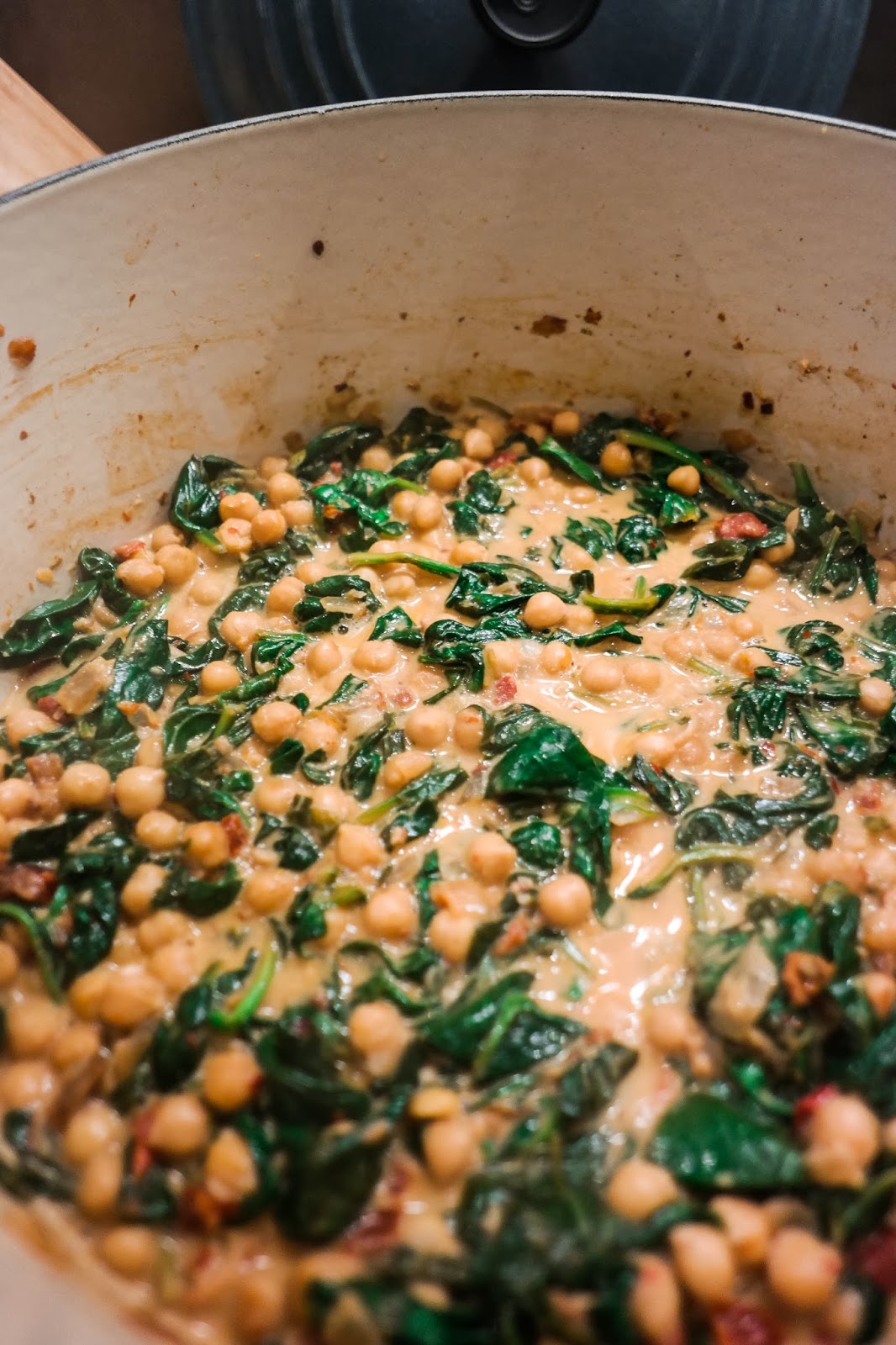 6. Whilst you're waiting, get a large frying pan on the heat and dry toast some coconut shavings.  Chop the coriander. 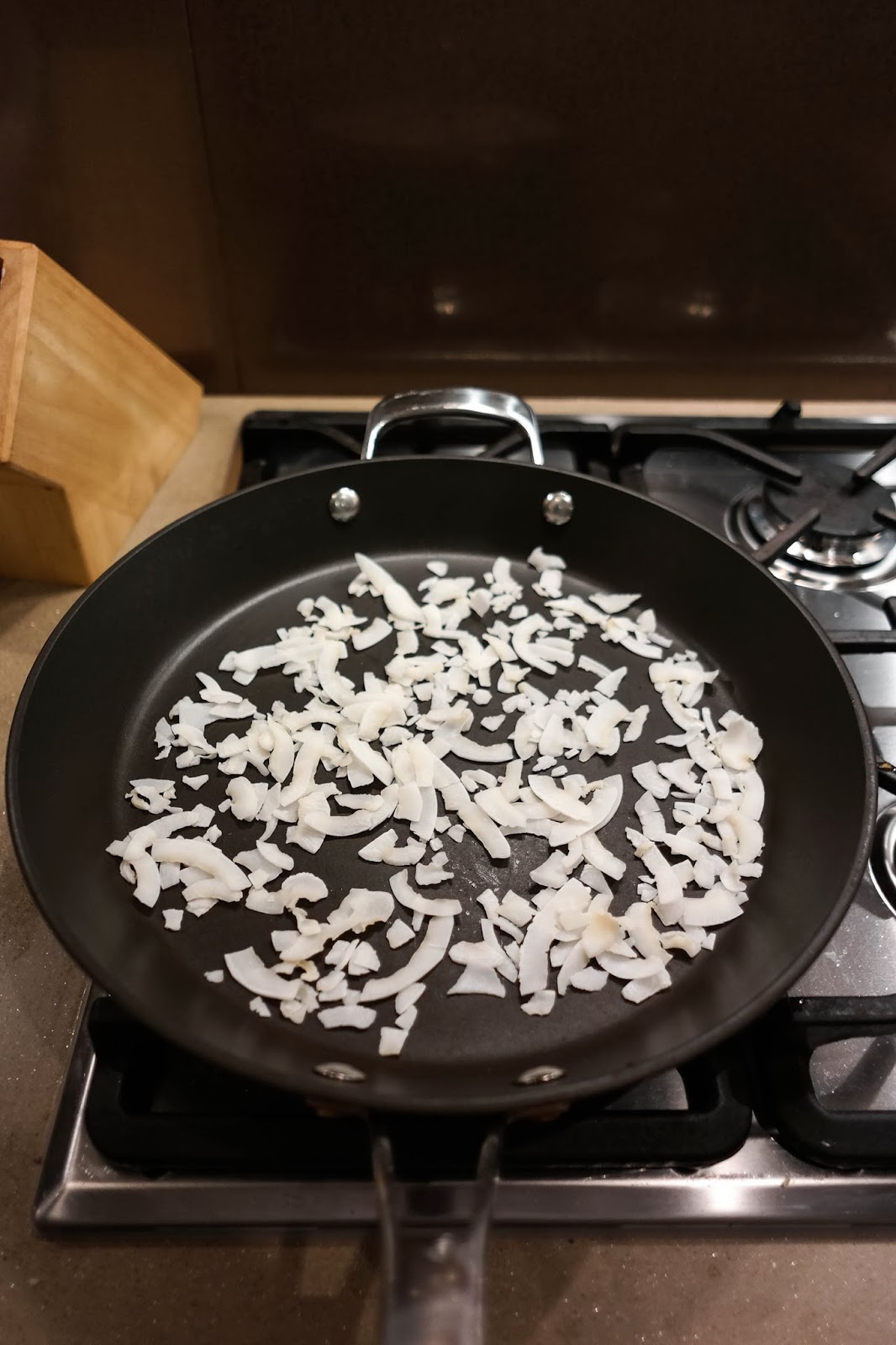 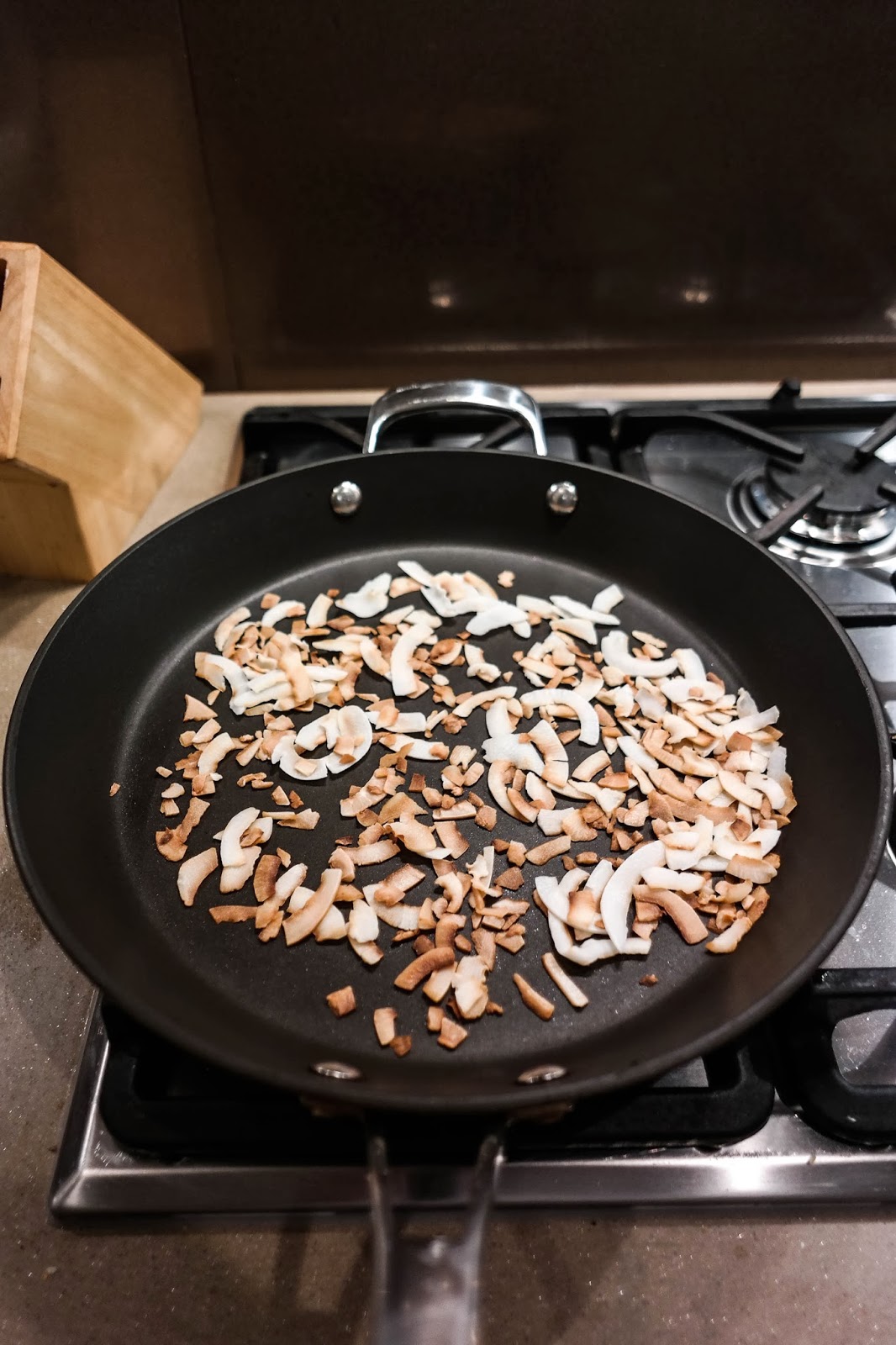 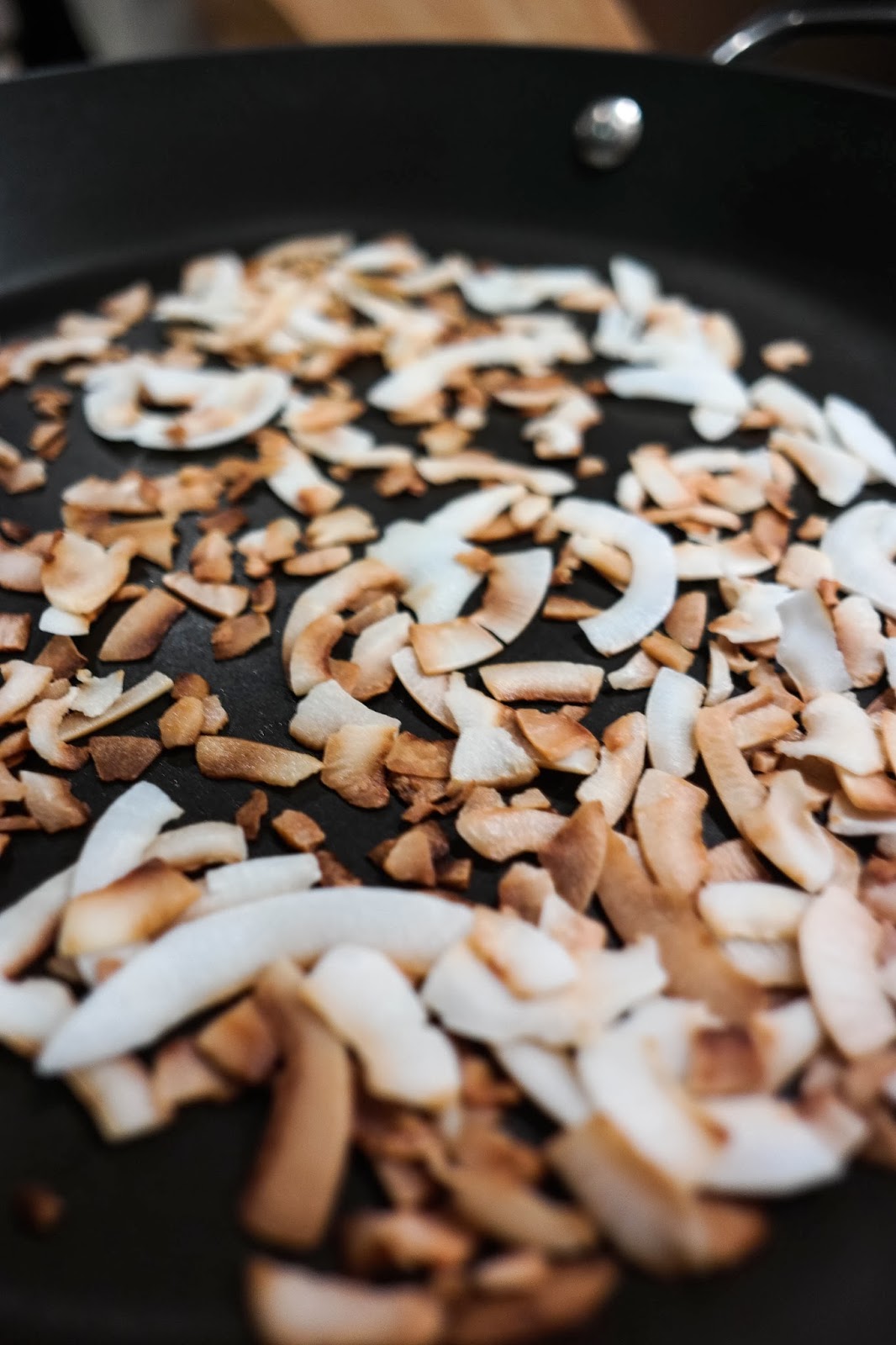 7. If you've timed this well, your sweet potatoes will be roasted nicely now.  Get them out of the oven, peel the garlic cloves and add them back in.  Spot the dish with butter, then mash it to a rough pulp.

8. When you're ready to go, spoon the potato into a bowl before ladling over the chickpea and spinach mix.  Make sure you got plenty of sauce going on too. 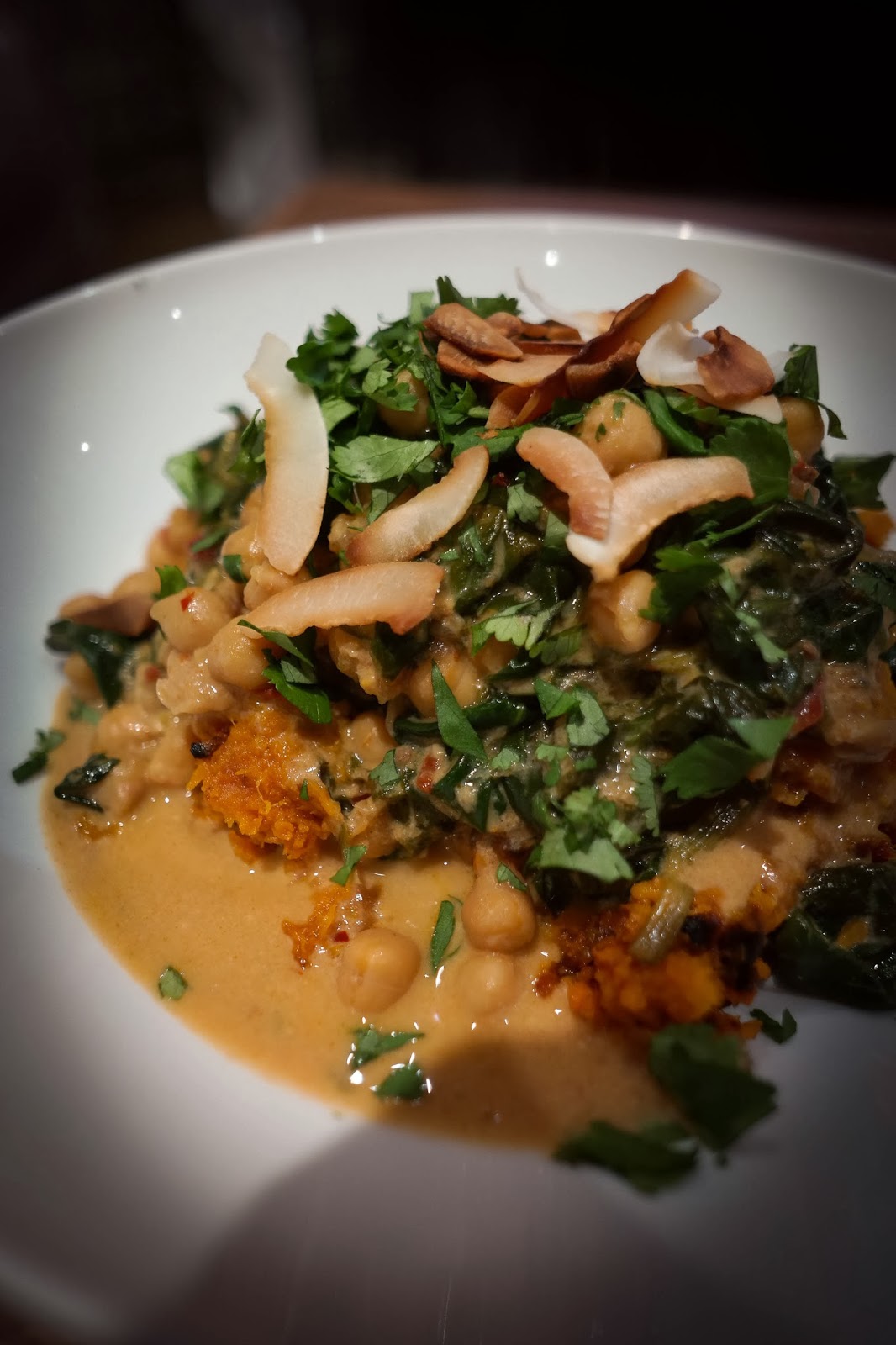 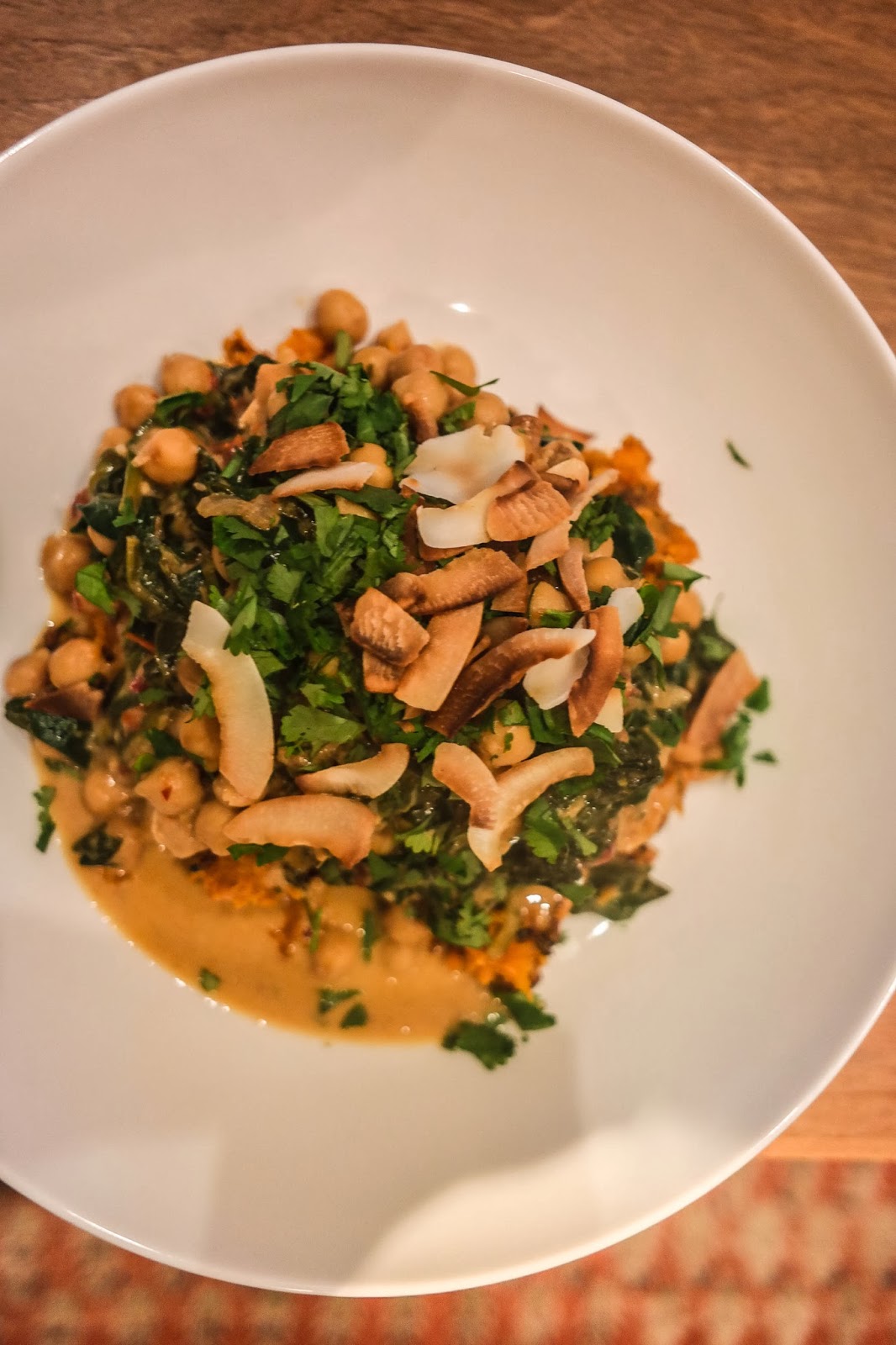