The other night GrubsterGirl and I enjoyed a charming evening of sherry sipping and food tasting.
The Ametsa, the restaurant at The Halkin by COMO hotel in Belgravia, has set up and ran a charming little event – the first of what they plan on being a series of Master classes.  For a relatively small crowd they gave a lecture on the history, production and styles of five different sherries, and paired them with some delicious Basque food.
The word 'sherry' is, in fact, little more than an Anglicisation of the town from whence most sherry originates: Jerez.  Indeed, sherry now has a protected designation of origin status, meaning that (like champagne or stilton or tequila) it has to come from the certain region after which it is named in order to be legally classified as sherry – of Jerez wine, as I suppose we are calling it.
The evening kicked off with a very interesting and detailed talk from Álvaro Prieto, Ametsa's sommelier, about the sherry making process and the history behind it.  Then we got down to the good stuff.
The five drops we got to taste were all dry sherries.  Sadly, my sweet tooth was deprived of what it craved, but no matter, because they were all very good.  We started proceedings with the only vintage – a 2009 Navazos-Niepoort.  Those of you who know your ports will have heard the name 'Niepoort' before, without a doubt – they are perhaps most famous for their ports and Duoro wines, but their recent partnership with Navazos to create sherry is a potential goer – keep your eye on this number. 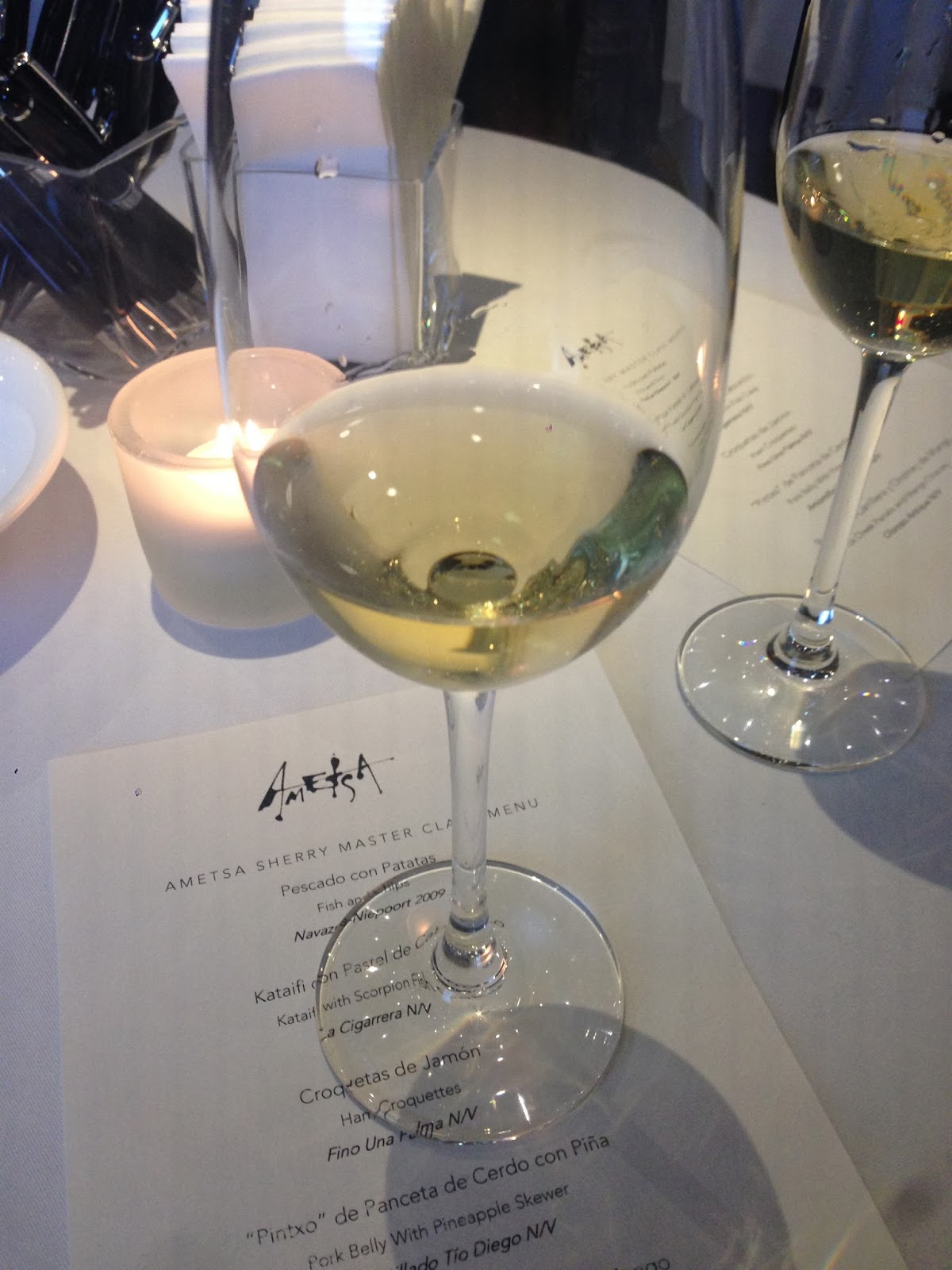 It was light, chalky, slightly sharp sherry that went beautifully with its chose pairing, which was pescado con patatas – or fish and chips to you and I. 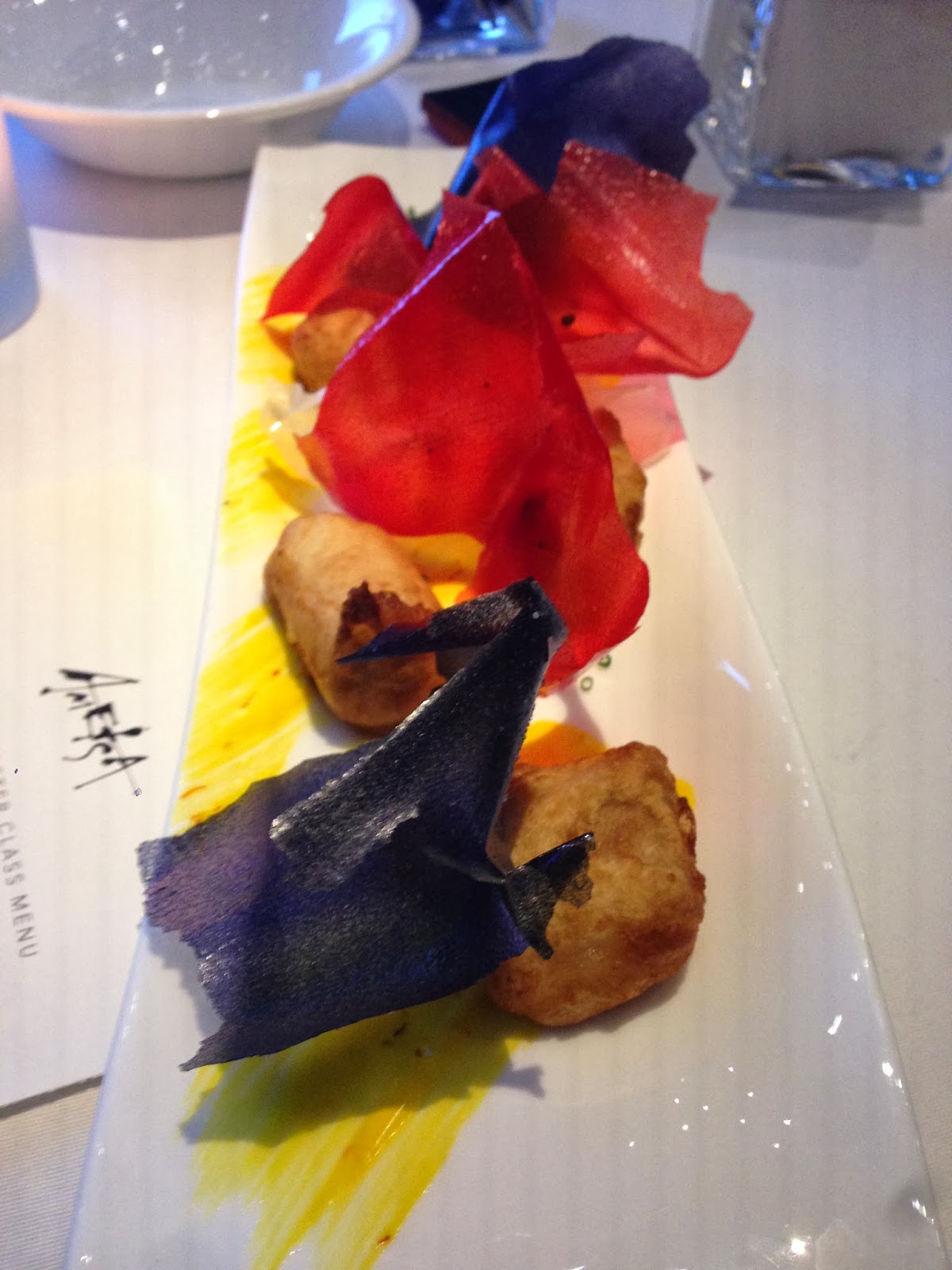 Now, I don’t know about you, but I've been down to the British seaside and I've eaten fish and chips, in the rain, out of soggy newspaper, doused in vinegar.  I know fish and chips.  Whatever these are, they're not fish and chips.  I'm sorry, they're just not.  Whatever they are, though, they're lovely.  The crinkly crepe paper you see is actually coloured potato paper, a little like crumply rice paper except salty and spuddy.  The fish was carved into big, moist hunks and beautifully battered in a light, crisp batter.  So I can’t complain too much (or at all) that they’re not like Maggies' (the best fish and chips in Britain, fact) – they were great fun.
Sherry number 2 was a La Cigarrera, a Manzanilla, which is a light, fortified Fino sherry.  Again, it was light and fresh, but not as interesting as the first or as exciting as the later sherries. 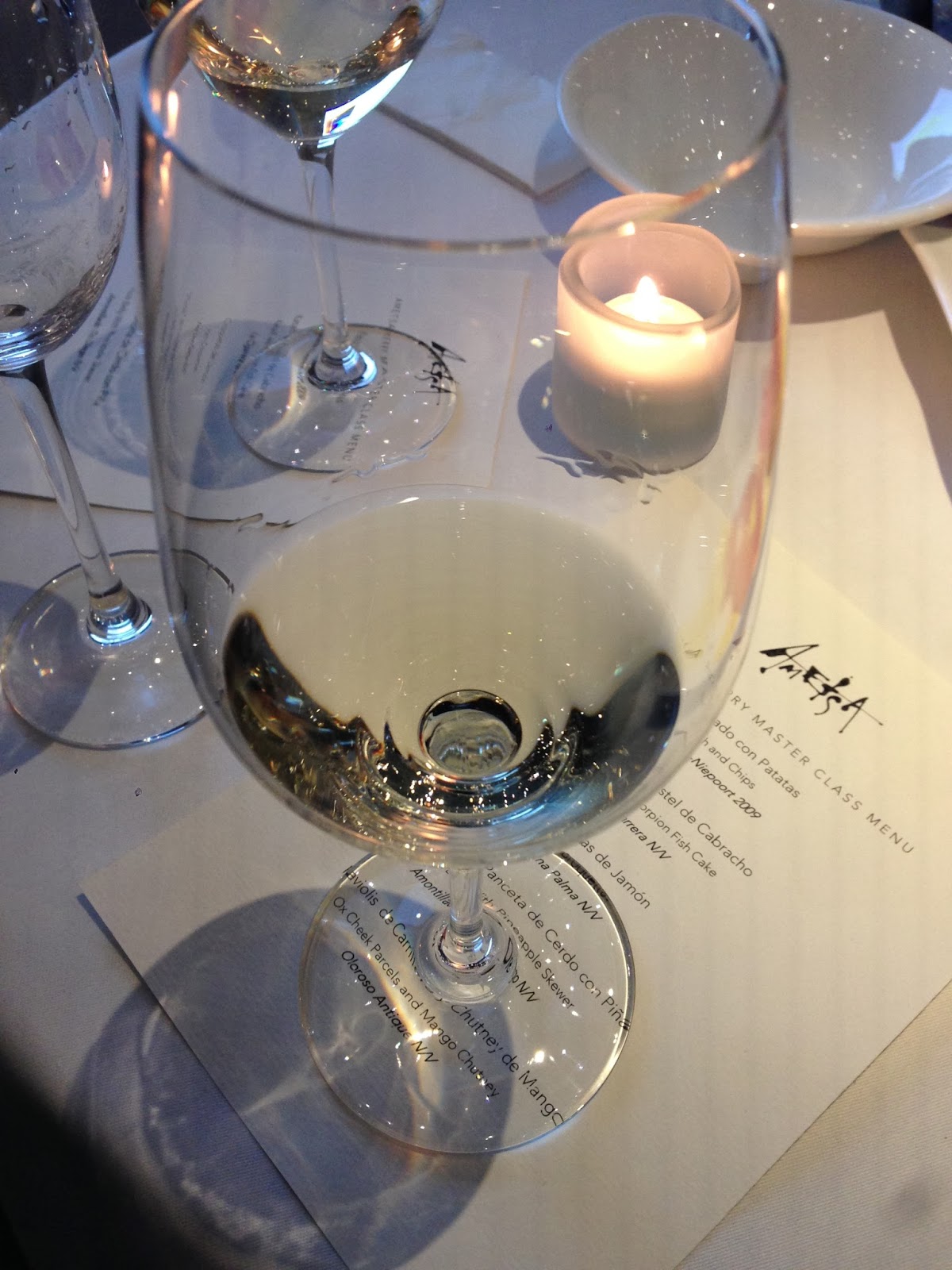 Its match was kataifi-wrapped scorpion fish cakes.  A bit of a mouthful to say, but not to eat – they were lovely. 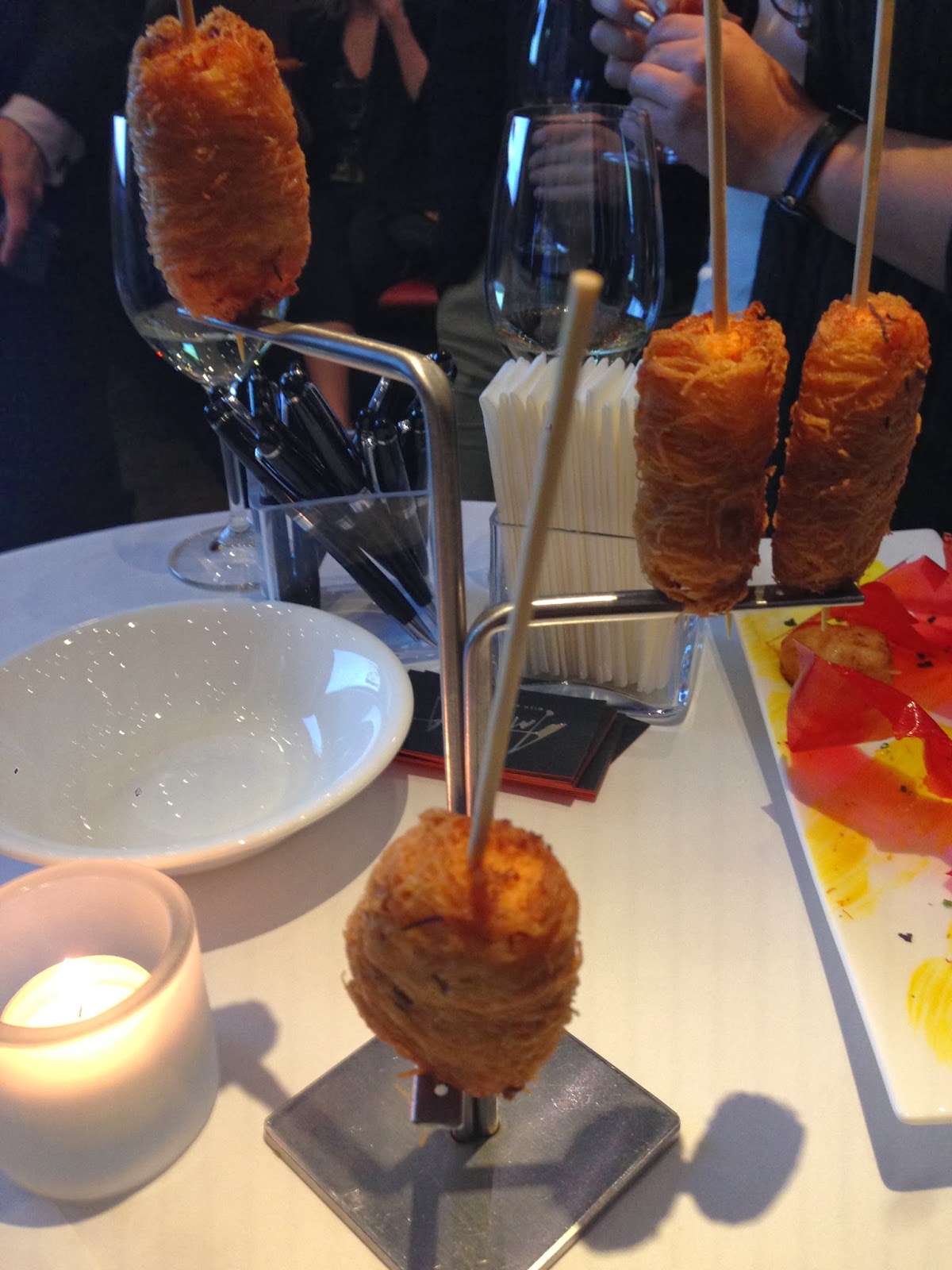 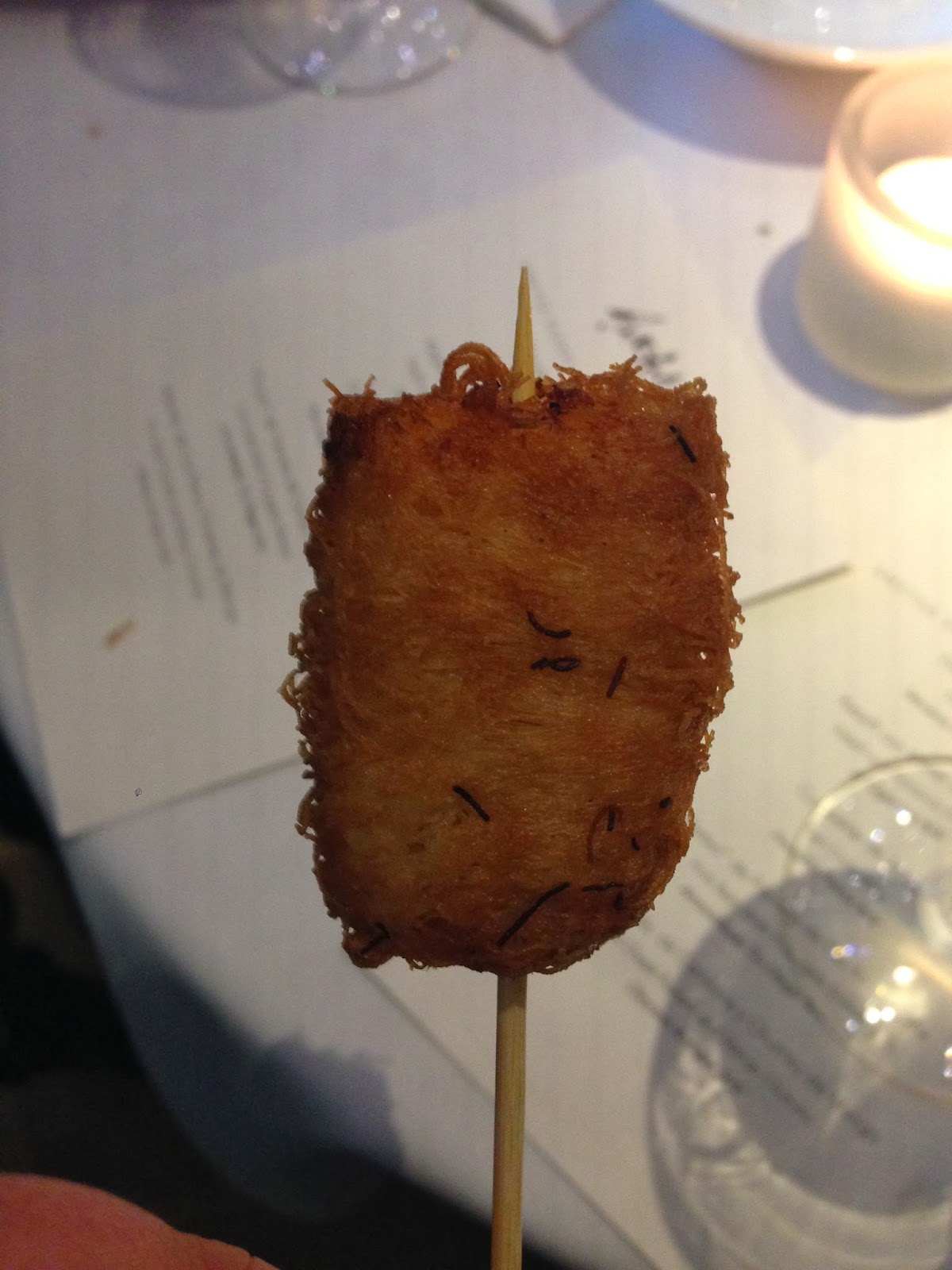 Third glass was the Fino Una Palma, which was a beautiful Fino sherry, aged for about six years and withy a fresh, salty, oaky palate.  Apparently it's available at Waitrose under another (very similar) label (wink-wink-nudge-nudge), so if you see it I'd recommend grabbing a bottle.  It's actually produced by the sherry giant Tio Pepe, but don’t let that put you off – it's a delight.
Keeping it company were some deliciously light croquetas de jamón.  So often when you eat Spanish croquettes in the UK they're thick and stodgy – these were quite the opposite, focusing more on the ham than a potato-based padding that other (cheaper) restaurants indulge in. 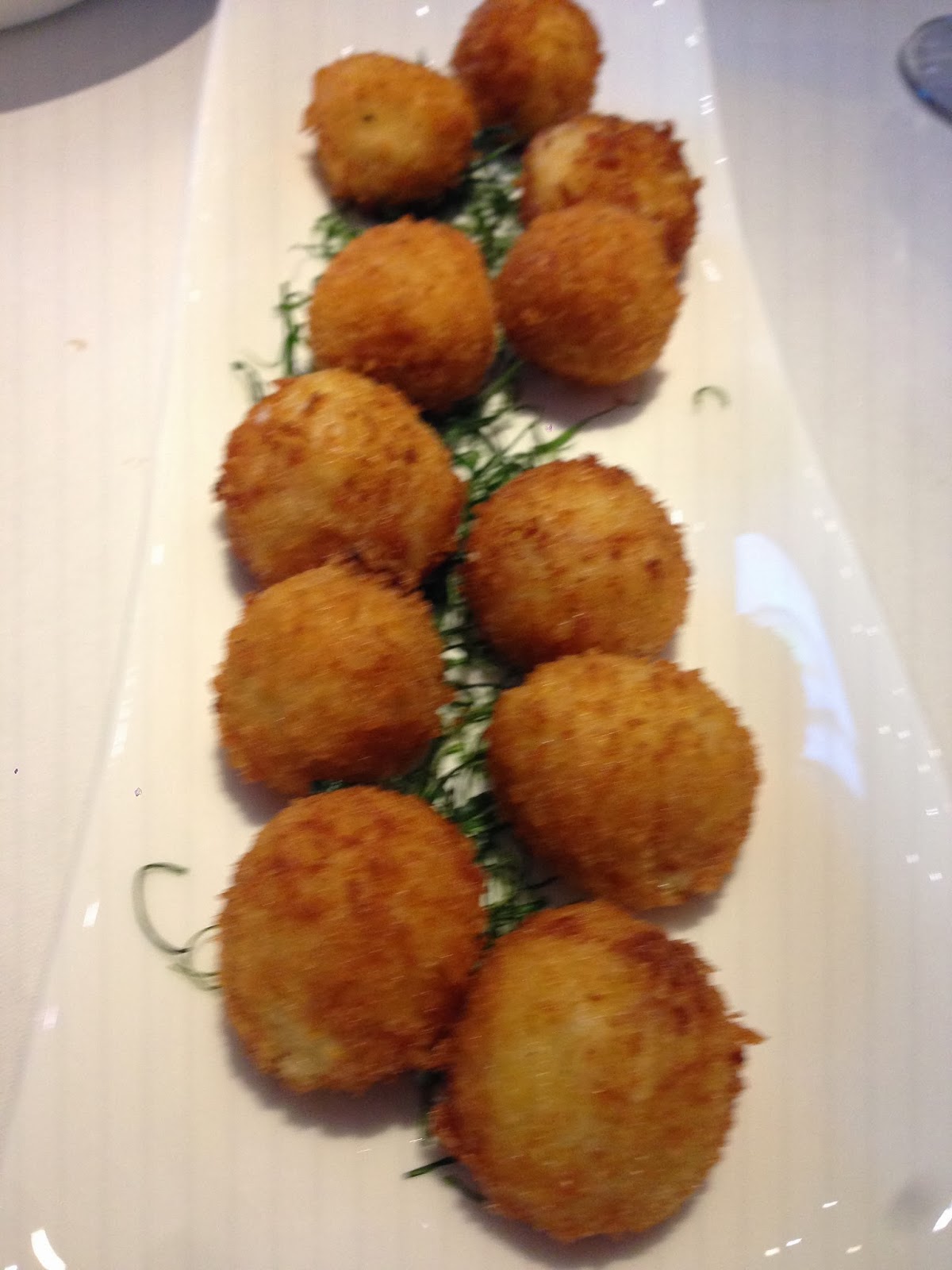 Next up, we're starting to move into the territory of my kind of wines – richer, louder, punchier.  This came initially in the form of an Amontillado, Tío Diego.  This was a real puzzler of a wine, in a sense.  The nose was all toasted almonds, caramel, sweet flavours; the palate was heavily dry, almost steely, with a slightly more drawn out citrus and buttery aftertaste. 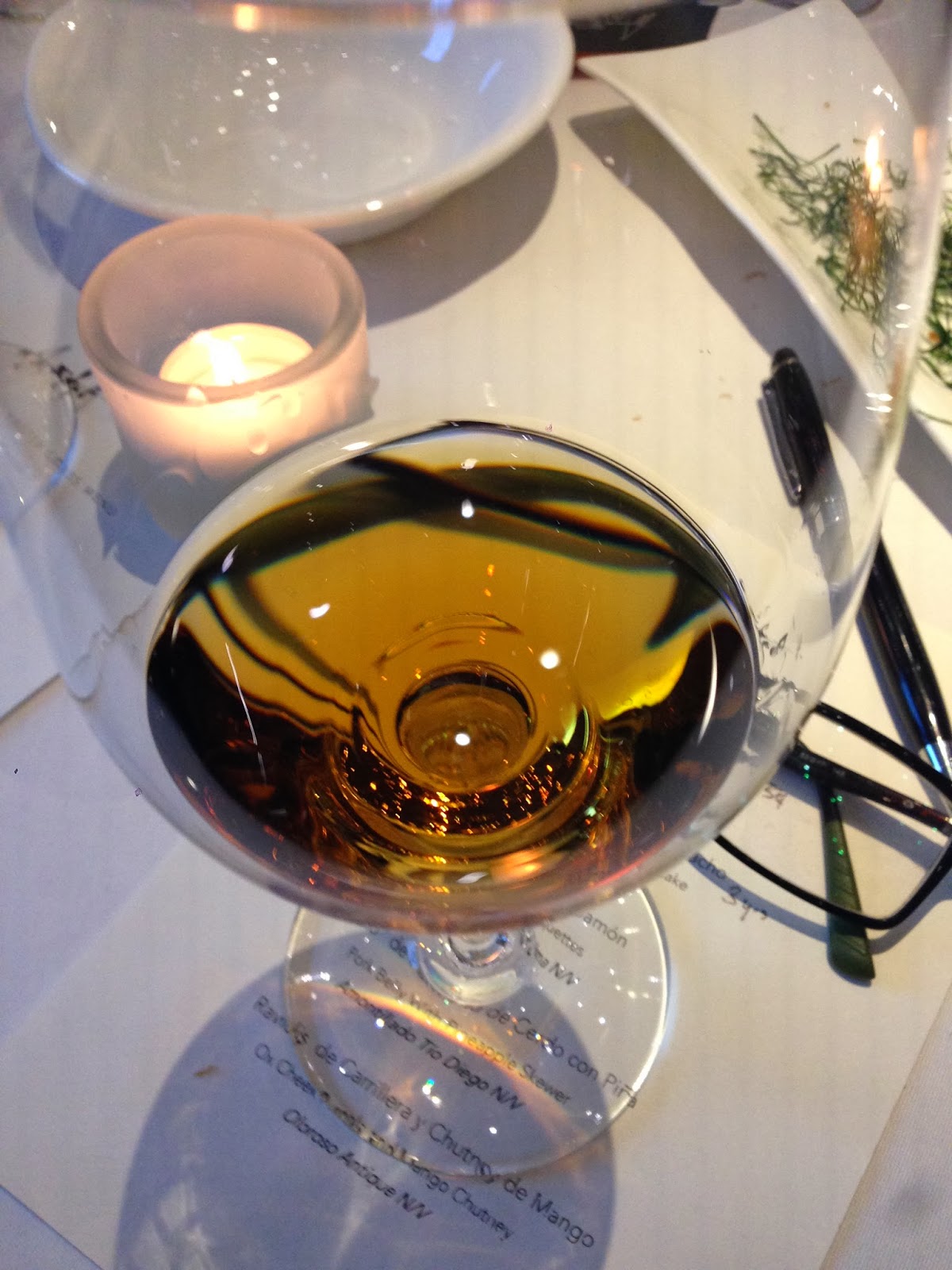 Its pairing was pintxo de pancetta de cerdo con piña.  Or ham and pineapple skewers to you and me.  Now, I love the attempt to bring in a bit of '80s glam, with the classic cocktail party canapés reimagined.  But, sadly, these just didn’t work.  There was nothing wrong with the execution – nothing at all, in fact the pork belly was cooked to melt-in-the-mouth perfection - but the dish just didn't work, sadly. 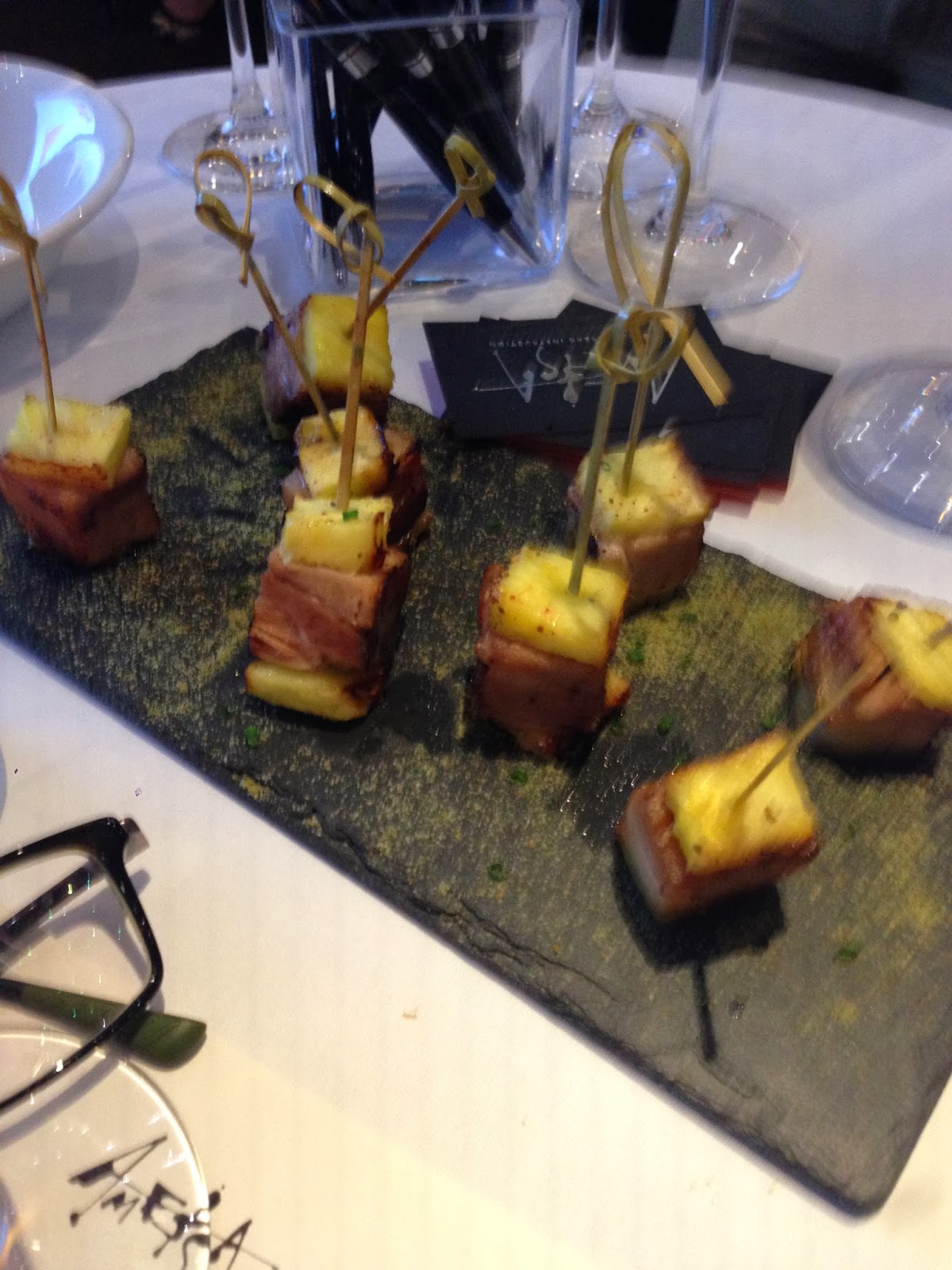 The final wine – and by far and away my favourite – was an Oloroso Antique.  This was fantastic.  Warm, rich notes on the note, followed by a sweeter (but still relatively dry) palate with a long, long aftertaste that grew in intensity and flavour over time.  It was the aftertaste that was most exciting – the initial flavours being a rich, dry sherry and little more, it then grew and grew into something richer, buttery-er, almost malty and with hints of popcorn.  No, really.  I'm not just trying to be pretentious.  This was stunning. 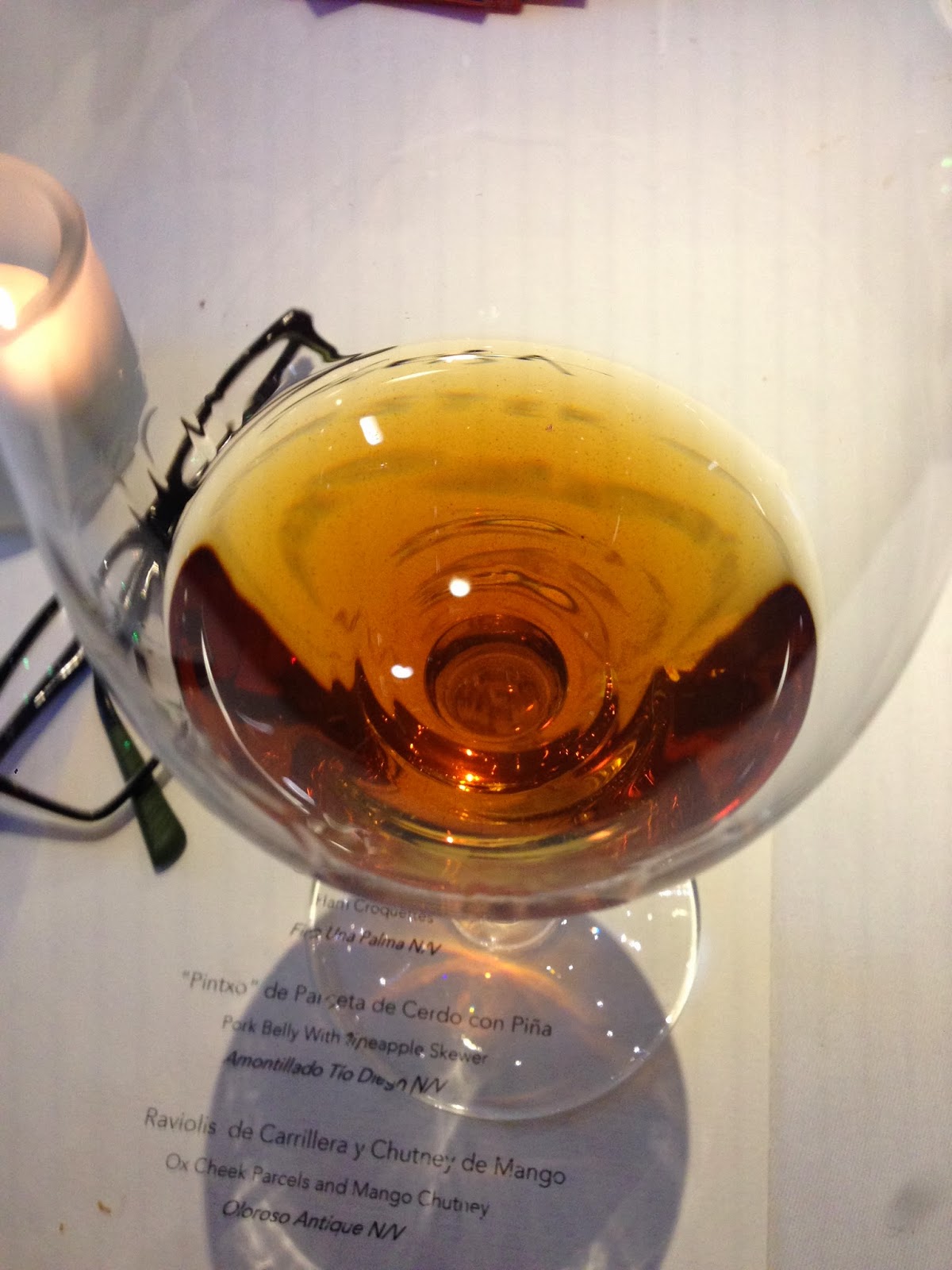 To go with it we had a classic Jerez staple, ox cheeks.  But, unlike your normal Basque fare (and, as I had by now realised, I rather imagine quite like your normal Ametsa fare) this was no ordinary ox cheek stew.  Au contraire, the dark, rich, slow-cooked cheek ragout was stuffed into little filo triangles and served with a sweet mango coulis.  Very nice indeed. 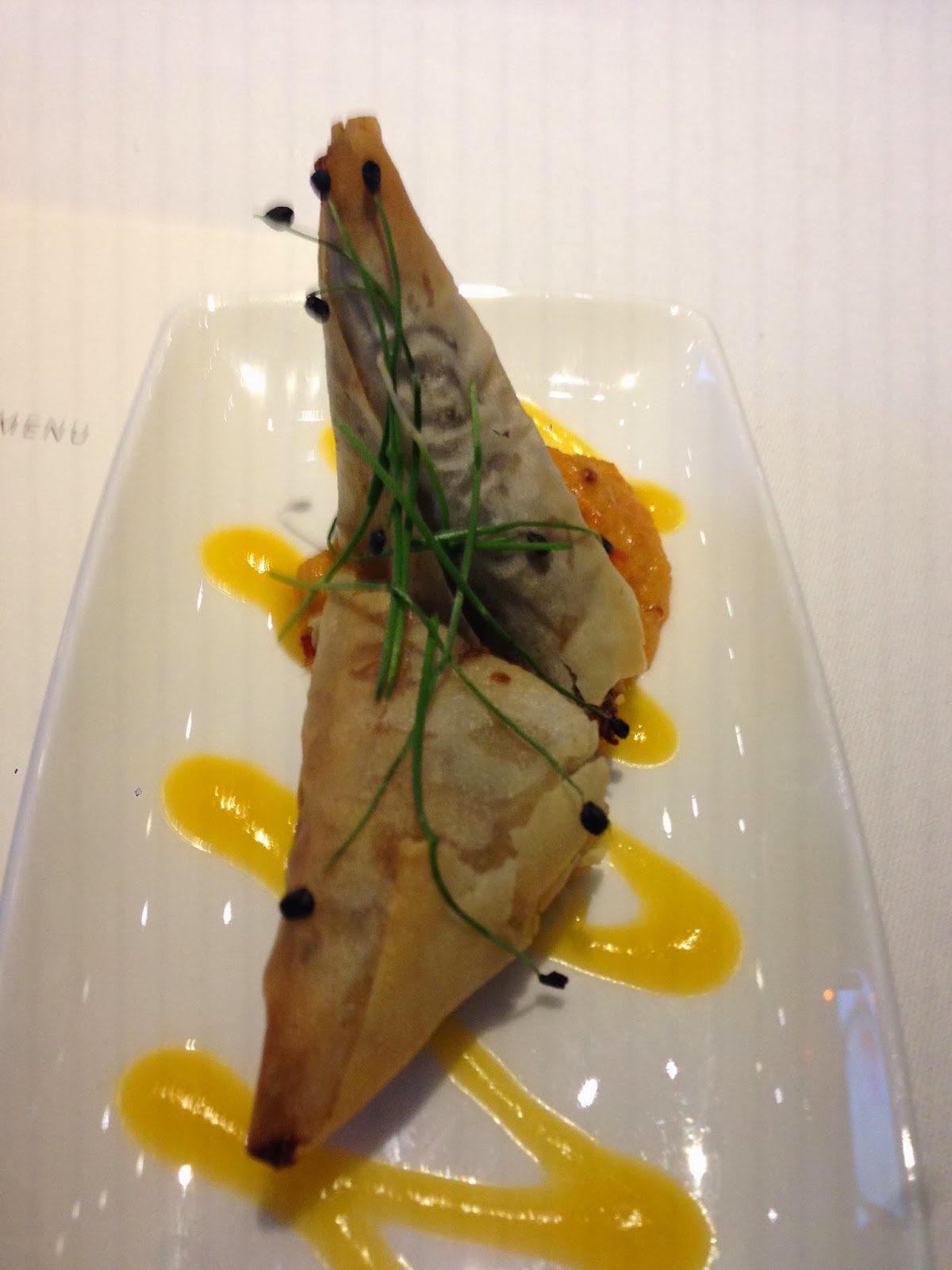 All in, it was a fun, educational evening with some good food and great wine.  At £30 a head, I have to say it was also pretty damn good value. 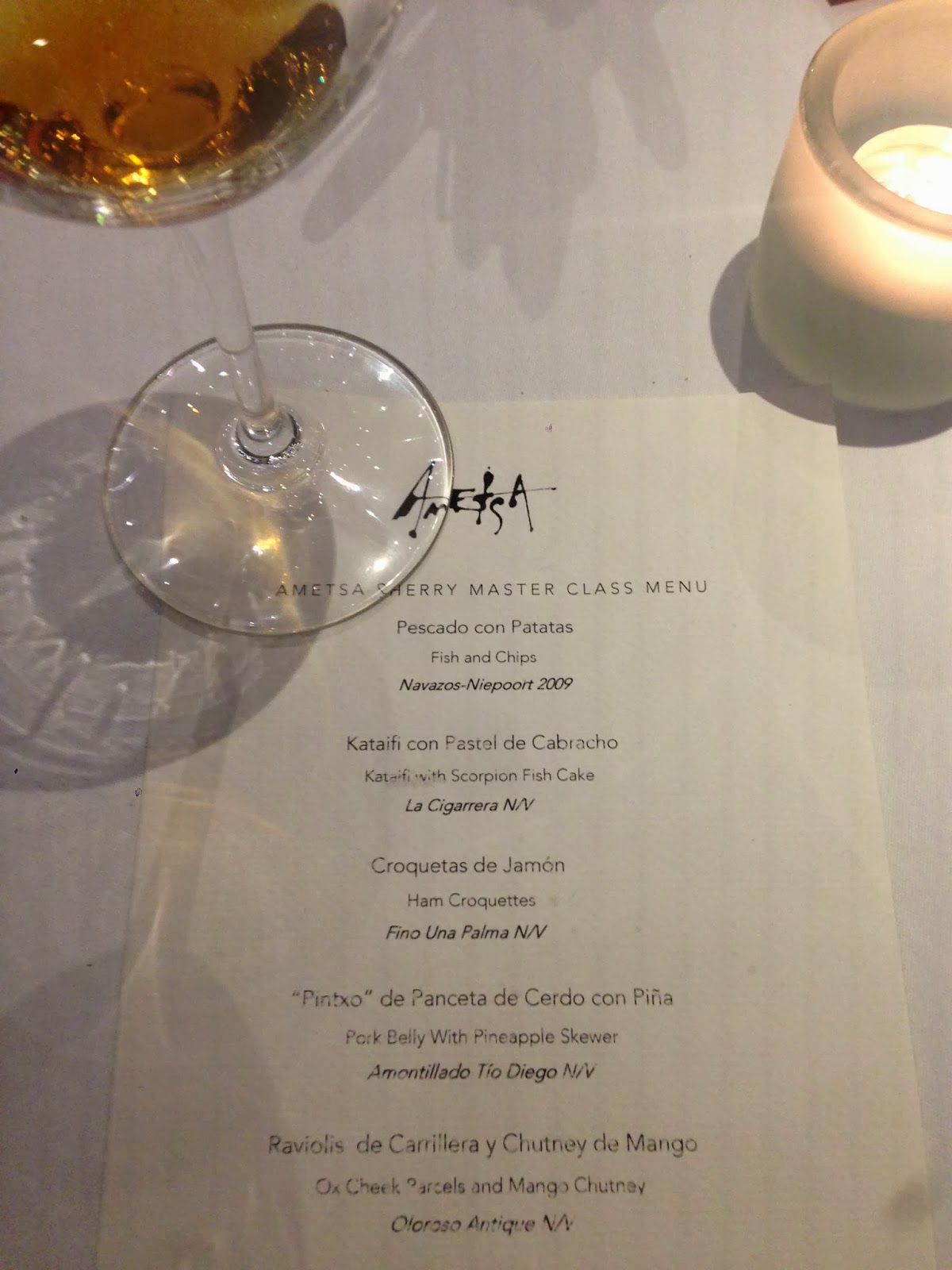