It's properly November now.  Winter in the air, temperatures dropping, the heating is properly on (yes, it needs more than an extra jumper), hot drinks are de rigueur,  Christmas lights are blinking into action, and we’ve had the first frosts of the year.
What's that you say?  First frosts?  Can only mean one thing: sloe-gin-making-season is upon us. 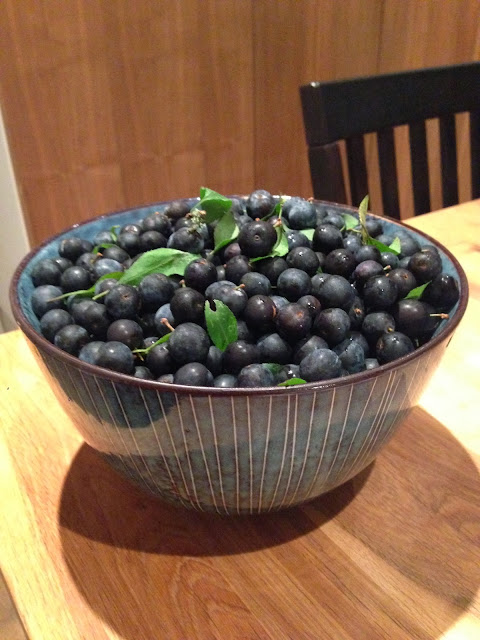 Making sloe gin – in fact, making any kind of liqueur, pickle, jam, chutney, conserve, etc – I find remarkably satisfying.  There's something so wonderfully homey, so fantastically back-to-basics, down-to-earth about using some ancient and time honoured tradition to preserve flavours and fruits, creating a whole new concoction from the raw materials you have to hand at the time.
A few weeks ago I did damson gin.  This recipe is basically the same, albeit with sloes and a little less sugar.  Both recipes are adapted from the Cottage Smallholder blog, which is fantastic and a must-read for anyone looking to make fruit infusion liqueurs.
What's more, this has been a bumper year for sloes.  We wandered off to a blackthorn bush we know of nearby and found it positively drooping under the weight of all the fruit – the amount I've made was not the total of the bush's produce; it was the amount picked by the time the pickers got fed up. 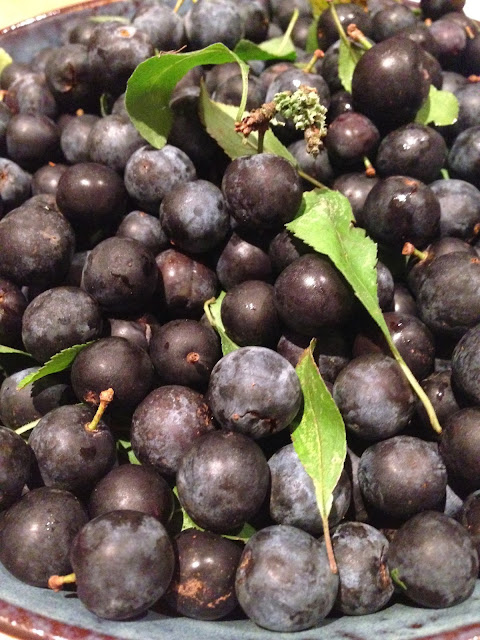 Ingredients:
450g Sloes
75ml Gin
150g Sugar
Small handful of blanched almonds (Sadly, GG is allergic to nuts, so I left this out – but it's generally accepted that this brings a touch of magic to sloe gin.  Also, you can add three drops of almond essence on bottling, if you prefer.)
1.5 litre kilner jar for steeping
First thing first – I just made the requisite amount from the sloes I had (1,456 grams...) so the pictures show a quantity far outstripping the amounts above.  I just keep the proportions the same.  Second, this will produce a less sweet and sickly concoction.  If you like it sweeter, taste it after straining and add sugar to fit your preferences.
Second: Choice of gin is not too important.  Don’t go for really, really cheap gin – it's flavoured artificially – so what's the point in making flavoured gin if all you're doing is masking artificial flavourings?  But don’t spend too much on it.  I generally use supermarket brand gin, which is good enough (although having said that, it's probably artificial...).  I also had a rummage around the spirits cupboard and found quite a few almost-empty bottles to use up.  Someone will probably say you shouldn’t go mixing gin, but meh.  Also, vodka works equally well with both recipes – last year we made damson vodka, not gin – but we went for gin this time around. 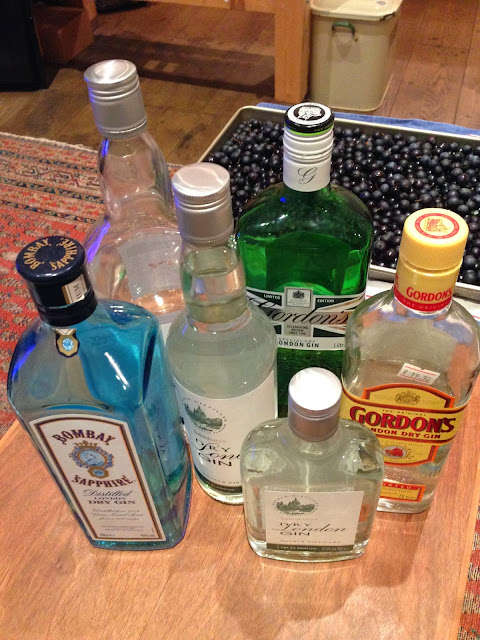 1. Pick your sloes.  As ever, please don’t go stealing fruit from other people's trees – you never know whether they plan on doing exactly the same thing, and there's nothing more depressing than going to a carefully nurtured patch only to find that someone's nicked all your fruit.  Just ask the landowner – you can even offer a bottle of the finished product by way of payment, if you're feeling generous.
Sloes are seriously beautiful fruit, too. 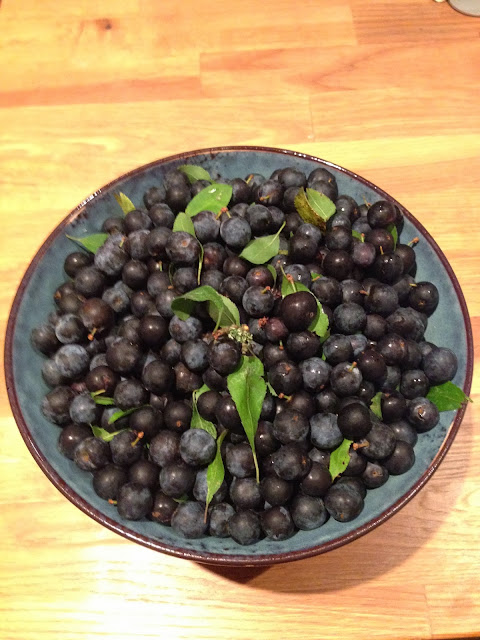 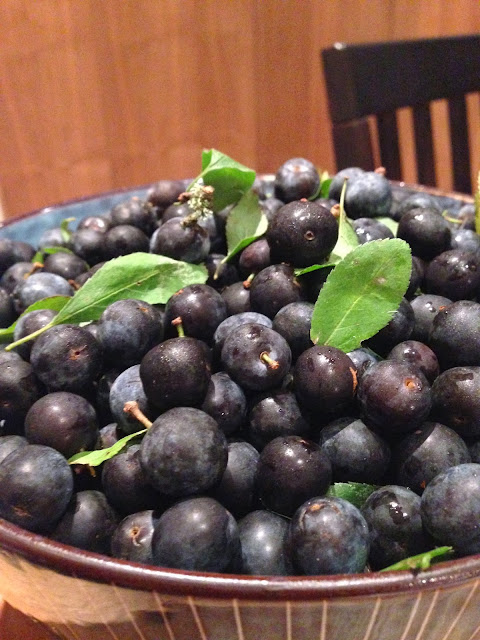 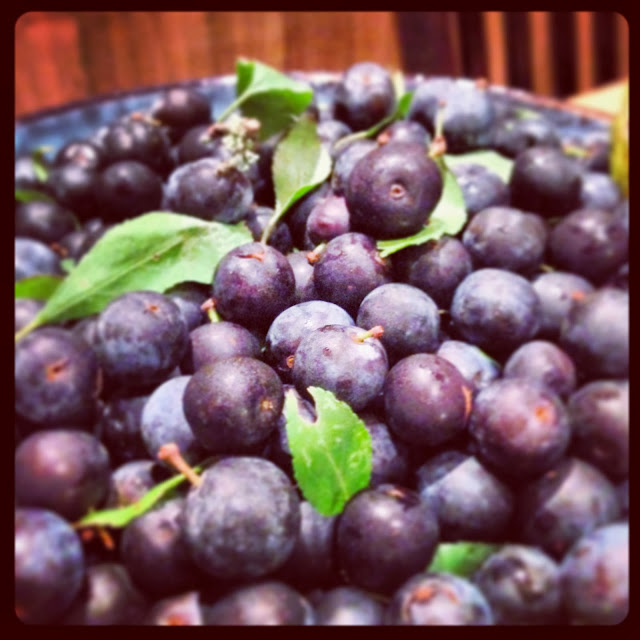 Before you go any further, now's a good time to clean them thoroughly.  Pluck out their little stalks and remove all the leaves.  I forgot to do this, and it turned into a bit of a nightmare later on.  Remember, if you leave this stuff in it will infect the flavour of the finished gin.
2. Freeze the sloes overnight.  This does one thing with two bonuses: It the freezing juice bursts all the little cells inside, leading to: One, the release of more juice; and two, it simulates the frosts, breaking down the cellulose inside which (I understand, although only vaguely) improves the flavour.  This year the sloes came early, so I couldn’t really wait until they'd been properly punished by the frosts.  Fiona at Cottage Smallholder ran an experiment to see what produced the best sloe gin – sloes frozen by the frost, sloes frozen in the freezer, or sloes unfrozen altogether.  The result was the frosts, but the freezer in second.  So unless you're in a position (a) second guess what the weather might do; and (b) be on hand to pick them as soon as the frosts have arrived, this method seems the best bet.
I simply packed them all into freezer bag and lay flat in the freezer for overnight. 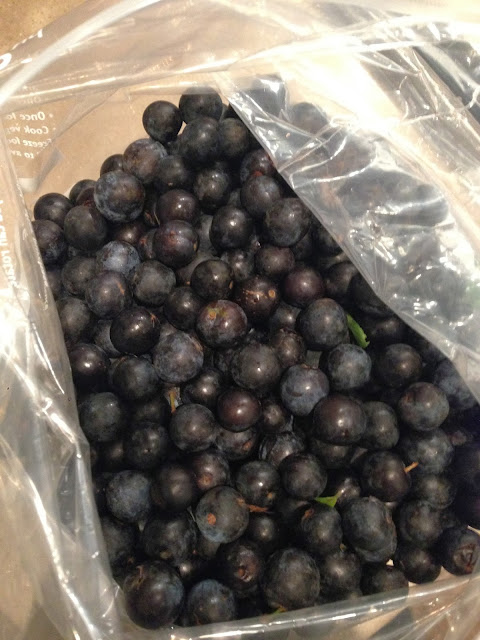 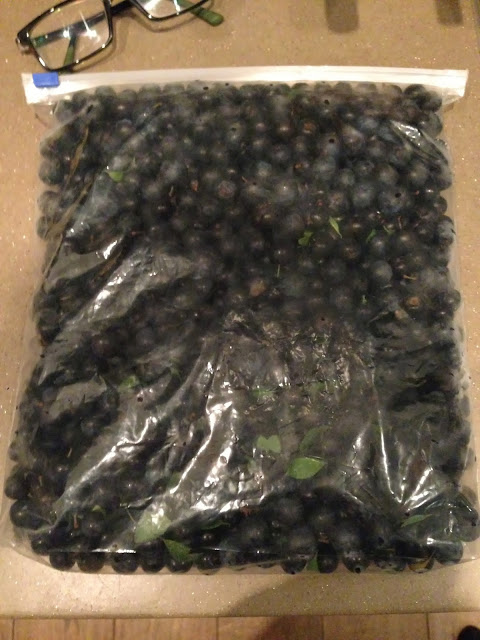 They came out looking fantastic.  You can almost taste the wonderfully, Christmassy spirit already. 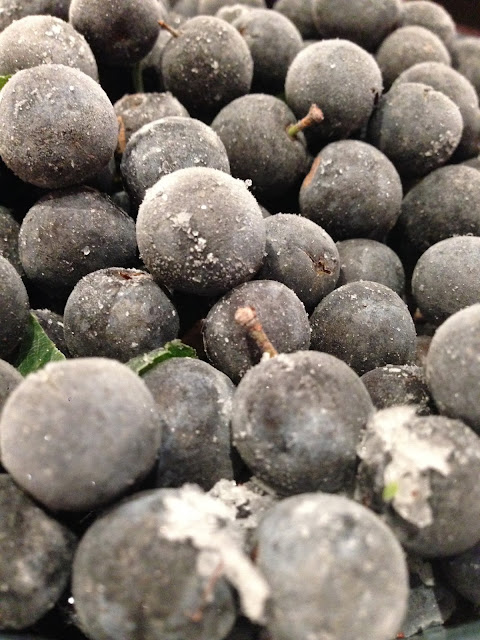 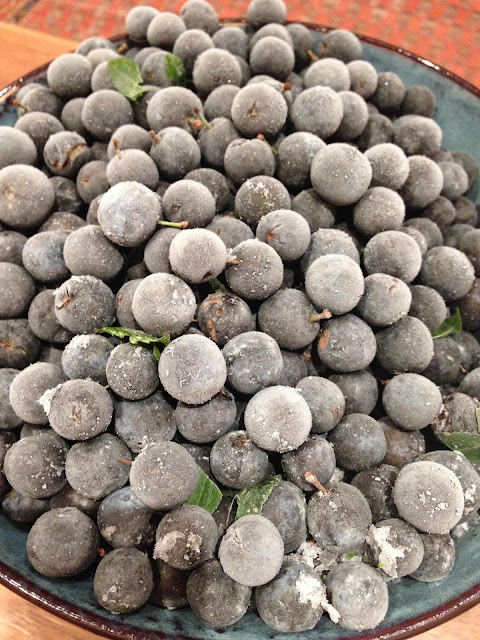 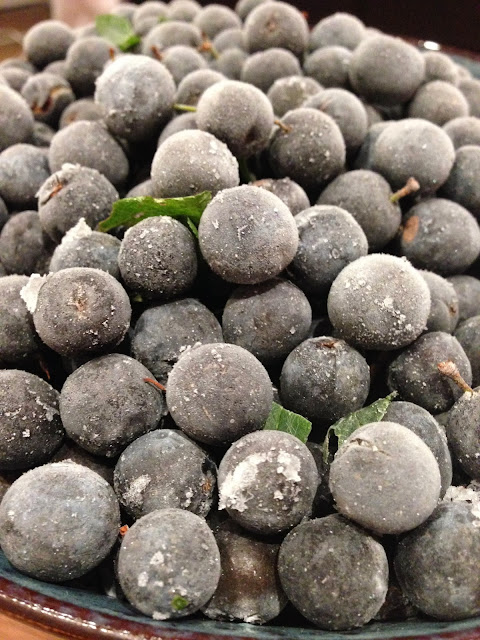 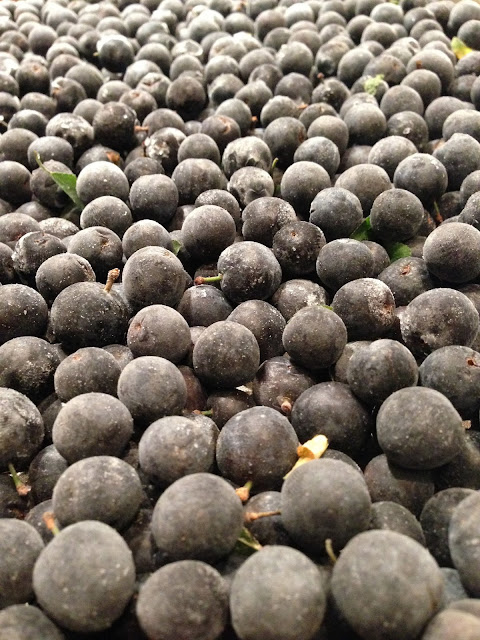 Whilst they're frozen they're like little marbles – they're the right size, and they sound, look, feel and roll like little marbles.  Ever so cool.
3. Defrost them thoroughly.  Laying them flat on a baking tray helps speed this up.
4. You need to prick your sloes.  Some people say that freezing them does this for you, but I'm not really satisfied with that, to be honest.  So get out a cocktail stick (or several), put on an apron and get picking.
They are squirty little blighters, so be careful – don’t do this kind of work over an antique table whilst sitting on a cream coloured sofa.  Like we did. 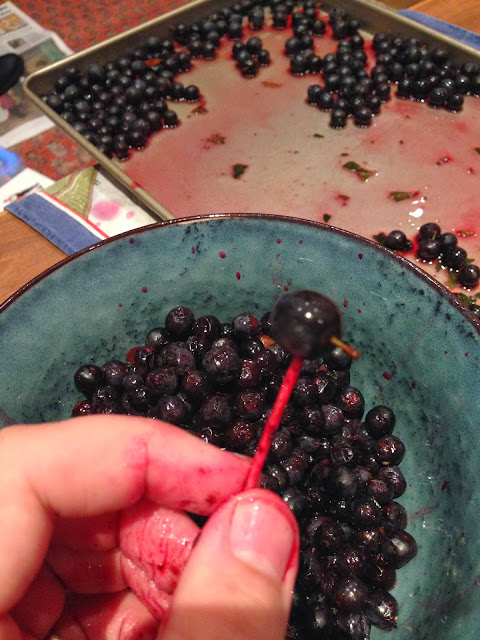 Once you're done, you should have a bowl full of sloes and they're juice.  Don’t waste anything by washing up the bowl now.  I pour a glassful of gin in there, give it a rinse, and add it to the steeping jar to capture all the – but I'm getting ahead of myself... 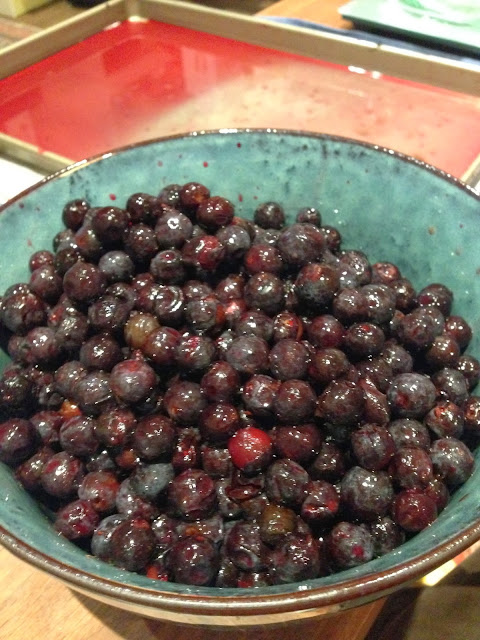 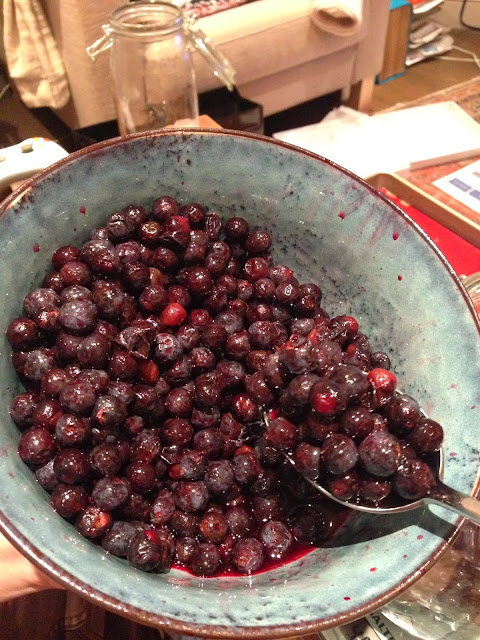 5. Tip all the sloes into the jar.  Add the sugar and your almonds (if using them).  Pour the gin over the top.  Keep the bottles – you'll see why below. 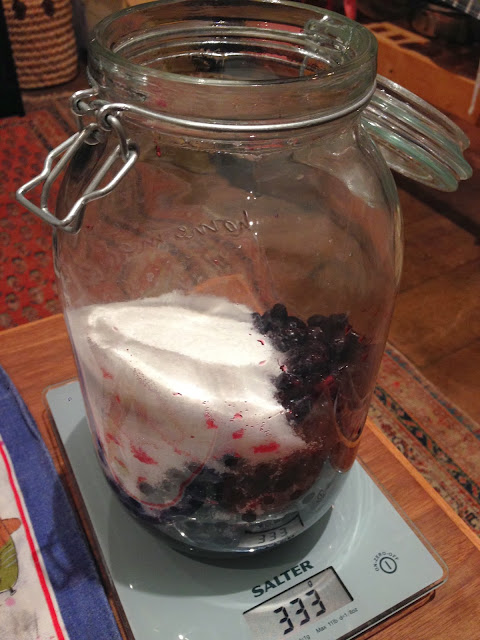 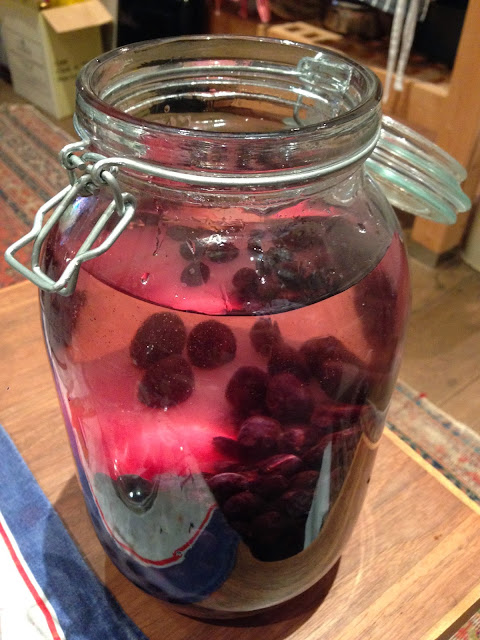 Seal and give it a shake. 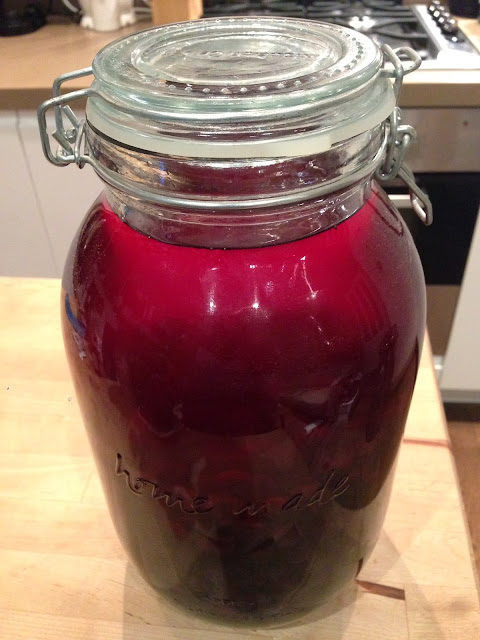 6. Now go stick it in a cupboard, shaking daily for the first week or so, until all of the sugar has dissolved.
7. Leave it alone.  Seriously.  This brew needs a good six months, minimum.  Leaving it too long will ruin the flavour, sure, but that's unlikely to happen until they've had a year or more.
8. At the end of the steeping time, strain and bottle (told you you'd need those bottles).  Strain it through a fine cheesecloth or muslin.  Don’t be tempted to squeeze the bag – it won’t do any good, and will only add sediment, which you don’t want.  If you have the time, leave it to drip overnight.
I actually did last year's batch a few weeks back, so here are some pictures of that process.
After ten months in a cupboard... 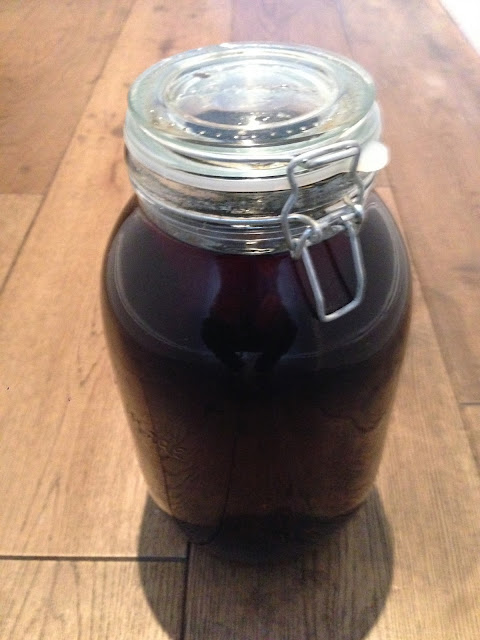 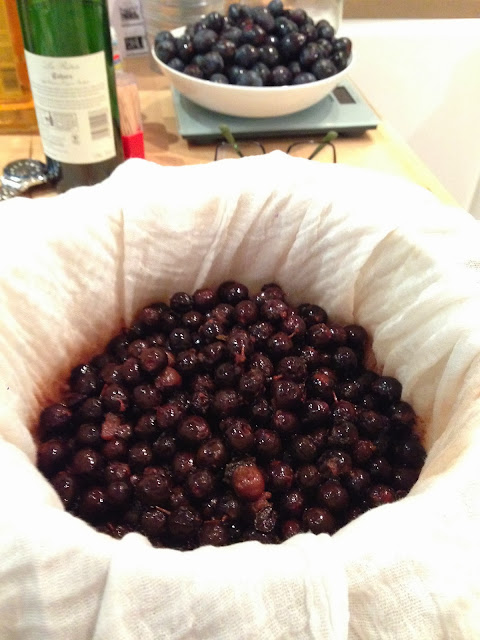 ...and bottled for maturation. 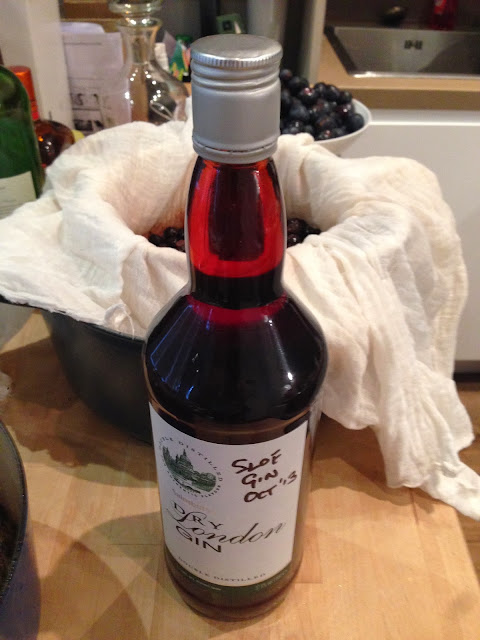 9. Now it needs time to mature – sorry, but really does.  Leave it another six months, minimum.  Remember – you're making sloe gin for next Christmas, not this Christmas.
10. Drink.  A fantastic cocktail is what a friend of mine calls the Sloegasm: A measure of sloe gin topped up with Champagne or prosecco or Cava or English fizz – basically, an English Kir Royale. 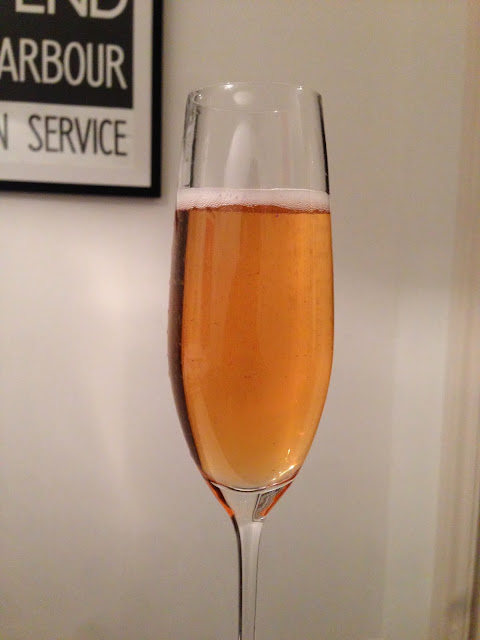 - GrubsterBoy -
PS: As a quick note: This sloe gin is made by simply steeping the sloes in gin for a long time.  There is an alternative method that involves fermentation.  But I'm saving that for next year.
Posted by Grubster Boy at 15:08