The Bar at the Gilbert Scott

The whole Mad Men, 1950s / 1960s New York plush thing has pretty much been done to death already.  But that's not to say that bars aren’t still going to try it, nor is it to say that they aren't (from time to time) going to get it bang on.  The bar at the Gilbert Scott is one of those.

GrubsterGirl and I had eaten brunch in the restaurant already – and sampled the bar's creations as well – but we were there strictly on a reconnaissance, so it made sense to hit the bar and see what they were made of.

Proceedings began with the Guilia's Julep, a tempting mix of Woodford Reserve bourbon, mint, lime, Fernet Branca, Cynar, cucumber, sage and ginger.  Essentially, an ultra-pimped version of the classic mint julep.  I'm a massive fan of bourbon (and the julep, for that matter) so it was a bit of a no-brainer.  What, quite simply, could there possibly be not to like? 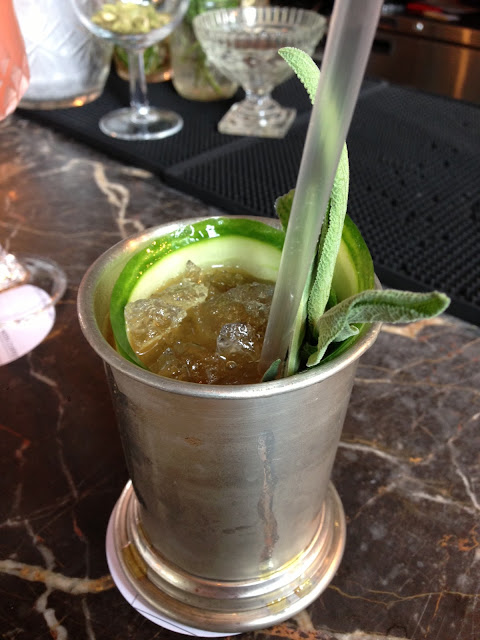 Well, quite a lot, as it turned out.  Sadly, this is one of those drinks that shoots for the moon and not so much ends up in the stars as fizzles out and goes phutt.  There's simply too much in there, too many flavours, which leaves your taste buds a complete mess by the time you're done. This is pretty much their signature drink, but it probably shouldn’t be: I wouldn’t go telling too many people about this if I owned the bar.

GrubsterGirl chose more wisely with her opening salvo, going for a Rhubarb and Ginger Sour with tequila – a choice given to the consumer, the alternative being vodka.  This was an absolutely fantastic little mix; all the right flavours in the right places, very satisfying indeed. 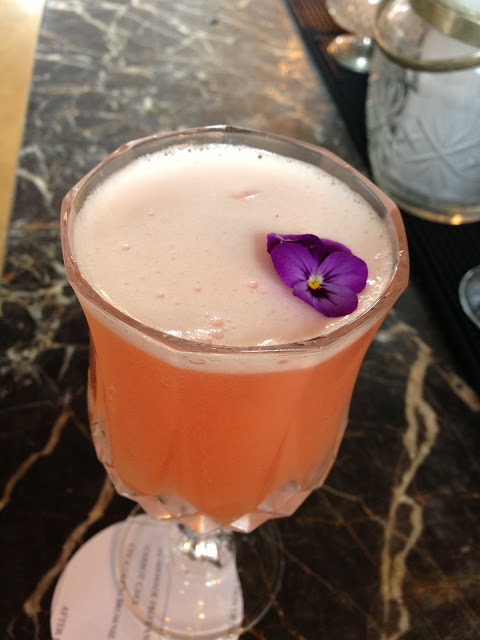 Round 2: For me, an Amber Embers – Campfire infused scotch, apricot and vermouth.  Yes, another whiskey cocktail, what can I say. 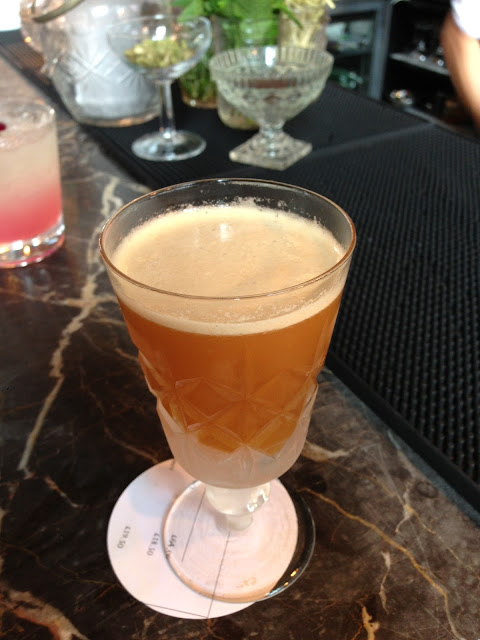 Suddenly, The Gilbert Scott had raised its game.  This was magnificent, full of all the smoke, salt, thump and power it promised.  Sure, it's not much to look at - especially considering the other efforts made on the presentation front - but I had to physically restrain myself from gulping.

GrubsterGirl's second choice was the Hibiscus and Chamomile Caipirinha. 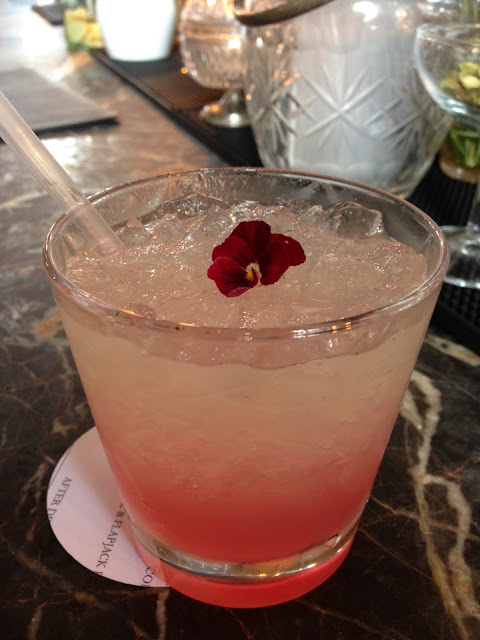 Cachaça (the core ingredient of any Caipirinha) has a strong, distinctive flavour which needs some punchy flavours to be heard above the noise, so I worried that hibiscus and chamomile might be lost.  I needn't have been worried about the hibiscus, which shone through, but I was slightly less impressed by the chamomile – by which I mean, where was it?  When matched to GG's first cup, this one was a bit off the mark.


The bar itself is opulent, in that mid-Century New York way that Campbell Apartments is.  We were there during the day, but by night I can imagine it's quite fantastic.  In fact, the only part I wouldn’t venture into is the garden – which is a shame, but it's situated right on the main road, so traffic just pours by.


And the damage?  Hefty.  Four drinks and semi-mandatory service set us back over £60, which is more than you want, really.  We started going to nice bars after a drink at the Savoy's American bar, which charges roughly £15 a drink – which is more expensive, but the drinks are flawless.  More in their league (and price range), and style, are Hawksmoor's many bars.  But then, their drinks are also pretty damn flawless.

Oh, one other thing.  Whilst we there there, sat up at the bar, the barman brought out a bag of greengages he'd sourced from some local market and set about inventing a new drink - quite unselfconsciously.  Now, I imagine that that's part of your trade, as a cocktail barman, but there's something magical about watching the creation and experimentation process, and it's great - and reassuring - to see someone at work who takes their job seriously enough to be doing that.