Controversially, I rather enjoy a maraschino cherry with an Old Fashioned.  Plenty of people object, and I understand that – I can't imagine there's anything particularly traditional about the provision of a piece of candied fruit in a drink like that (to the extent that there is anything traditional at all to an Old Fashioned…).  But there's something incredibly retro, something that makes you actually feel like Don Draper with a kitsch cocktail cherry floating in your manly bourbon.  Or so I feel.

The problem is that the maraschino cherries on the market are, frankly, disgusting.  They get even more disgusting if you ever find out what goes into making them.

So I wanted to have a go at making some of my own.

First step was to visit Maynards Pick Your Own Fruit Farm in East Sussex.  The recipe calls for fresh morello cherries, which are an absolute pain to get hold of.  I think they're probably essential - despite various peeps on t'internet saying you can make these puppies with any old cherries, I can't help thinking that, what with all the sugar and the sweetness of the liqueuer, you're going to want something to balance it out, and sour morello cherries are probably a good start.  Maynards had some so we went a-pickin'.  Also, the folks there are lovely, the fruit is great value and there's something wonderful about hand-picking the fruit that you're going to eat.

Next was to find a recipe.  This one came from Cupcake Project.  I've translated the recipe from US measures to rough English measures.

100g Granulated White Sugar
125ml Water
Cinnamon Stick
Nutmeg for Grating
1tsp Vanilla Essence
250ml Maraschino Liqueur (I've used Luxardo, largely because it's the only one I could find at very short notice. I found it in Grape Sense next to Chalk Farm Tube, which is awesome.  Gerry's in Soho stocks a wider range.)

750ml Kilner Jar (or similar) which has been sterilised

First, pit all of your cherries.  Buy a cherry pitter for this, there is really no other way.  Also, for the love of God, wear an apron.  These little blighters are squirters.  As you can see. 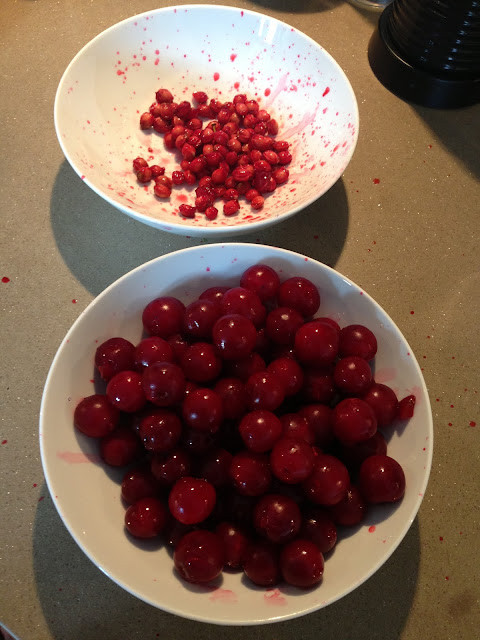 Next, heat the water and sugar together in medium pan.  Remember that you're gonna have to get all your cherries in here too, so make sure it'll fit them all.  Once the sugar has dissolved thoroughly, add the cinnamon stick and vanilla essence and grate in a little nutmeg.  The bring it to the boil. 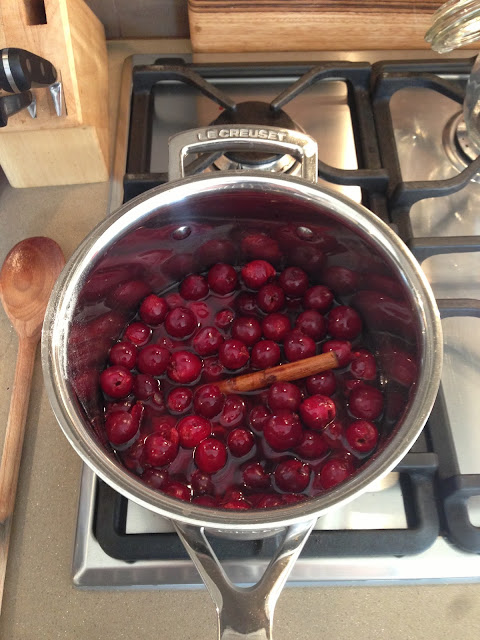 Simmer those cherries for five minutes.  Actually, if I did this again, I'm not sure I would.  I used very ripe cherries, and my end product is a little… soft for my liking.  So next time I think I'll just add them to the pot and then immediately turn the heat off at this stage.

Whatever you do, you need to turn the heat off once you've done it.  Once it's cooled a smidgen, add your maraschino liqueur.  Once the whole mix has cooled a little, plonk it in the jar.  I sterilised mine by washing it thoroughly then rinsing with boiling water and placing, upside down, in an oven at 150°C for 15-20 minutes.  Hope that works. 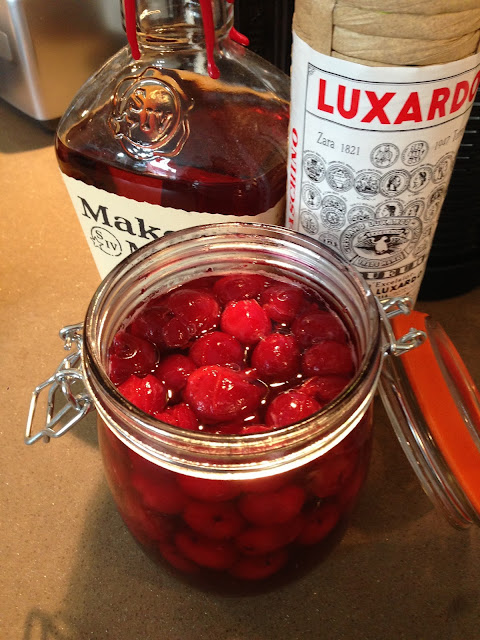 Once all that's done, stop taking artsy photos, seal it up and put it in the fridge for a few days.  Then mix an Old Fashioned / Manhattan / any other cocktail, and voila.

Oh, also, I had some surplus syrup left.  I also had a few fingers of bourbon left that I had intended to save for experiments involving making bacon infused bourbon, until I realised that this was a terrible idea.  So I mixed the spare syrup and the bourbon together, and one day soon I'm going to attempt to recreate the fantastic Cherry Manhattan then make at Lost Society.  I'll let you know how it goes.