GrubsterGirl and I tend to try to manage at least one day of a weekend with just the two of us, holed up in the flat with papers, a jug of coffee and preferably something to eat.  This weekend has been a busy one, so thank goodness it was a three-day-er.

To celebrate the extra day, this morning we got up bright and breezy to make my favourite brekkie: French toast, bacon and maple syrup.

It’s a strange combo, but far from an usual one.  In the States, they’d barely think twice about lathering salty, fatty, streaky bacon with lashings of syrup; in England we turn our nose up at the idea.  I remember the first time I tried it – in an underground, all-you-can-eat breakfast bar in New York.  At uni, up in Edinburgh, there was a great place called Favorit* that sold bacon rolls, coffee, Belgian beers, and, yes, French toast, bacon & maple syrup until 3.00 am, making it the perfect post-pub stomach filler.

The mix of salt and sweet is a fantastic one – and much more common that people think.  Salt and sweet popcorn?  Salt chocolate?  Salted caramel?  It’s everywhere.  And it’s great for breakfast – especially if you’re suffering a little from the night before. 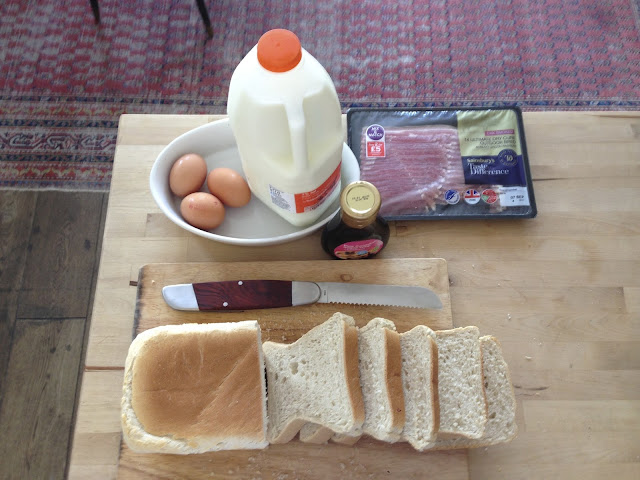 Loaf of white bread (In truth, I expect it’s fine with brown, or even granary.  I just like it done with white bread, a really cheapo tin loaf – although you want one as crusty as you can, otherwise it’s a bit of a nightmare to cut.  Like this one.)
x4 Eggs (Use free range, please. There should be four here, but I forgot one.)
Splash of milk
x10 rashers of smoked streaky bacon
Maple syrup

1. Get that bacon in the pan and start it frying.  Or stick it in the oven if (a) you remember to pre-heat it; and (b) you’re feeling healthy.  I did neither; I’m pretty disorganised and I kinda feel that, with this dish, if you’re cooking it then it’s a little late to be worrying about health concerns. 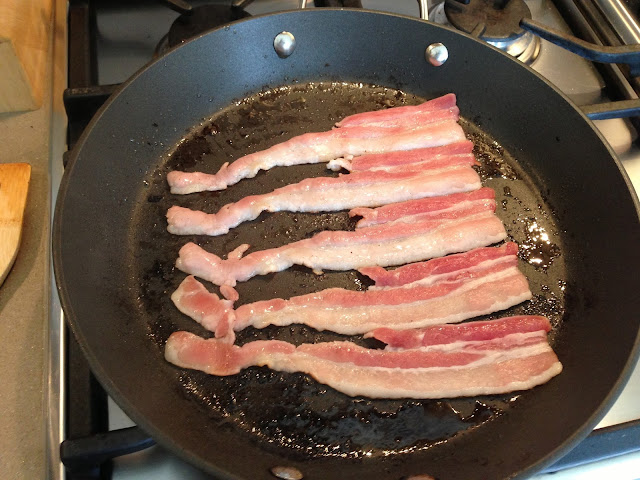 2. Carve your bread into nice thick slices.  You’re going to want the bread to soak up as much eggy-goodness as possible, so big chunks helps.  Thick, like the best part of an inch.  Slice diagonally to form triangles.  About one and a half slices per head.  Or two if you're a troffer.

3. Turn the bacon. You want it nice and crispy, American style.  That’s why I’m stipulating streaky bacon, not back.  Sure, back bacon tastes better, but here you want the streaky stuff.  Some supermarkets do Americanstyle bacon which is really, really thin, a bit like pancetta, and about 50% fat.  Go for this for the truly authentic experience, it actually aint that bad.

4.  Crack your eggs in a bowl and whisk them up with a splash of milk.  A bit like making scrambled eggs, but without the pepper and cream.  So not that much like making scrambled eggs, but you know what I mean.  Some folks like to add cinnamon at this stage to make it even more all-American.  I didn’t, but I won’s judge you too much if you do**.  Once mixed, lob in some slices of bread, turning after a few minutes so that both sides have soaked up lots of egg-mix.

5.  Once all the bacon is crispy, remove from the pan and leave on a piece of kitchen towel to allow some of the fat to be soaked up.  If it don’t look like this, do it a bit longer. 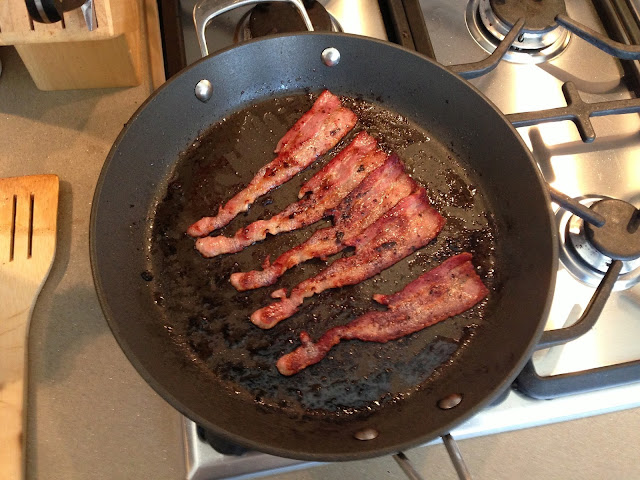 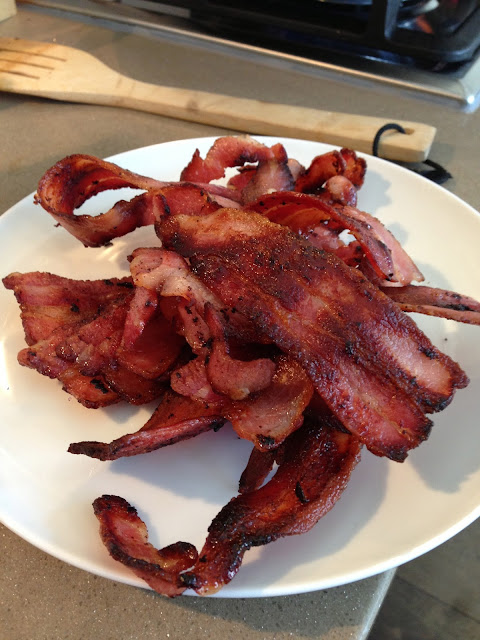 6.  Wipe down the pan and throw in the eggy-bread.  Cook it for two to four minutes, then flip it.  If it shows any kind of resistance or stickiness to the pan when you’re flipping it, give it a bit longer – it aint done yet.  When you do flip it, check that the underside (ie. the bit that’s been a-cookin') is a lovely dappled brown.  If not, give it a bit longer.  It should look a bit like this. 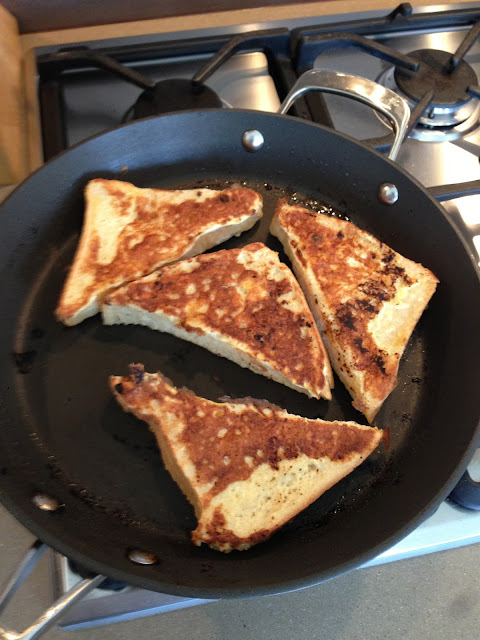 When both sides are cooked, stand them up on their sides to brown them.

7.  Remove from the pan.  Stack up, photograph, resist the urge to scoff them all, and Instagram that thing. 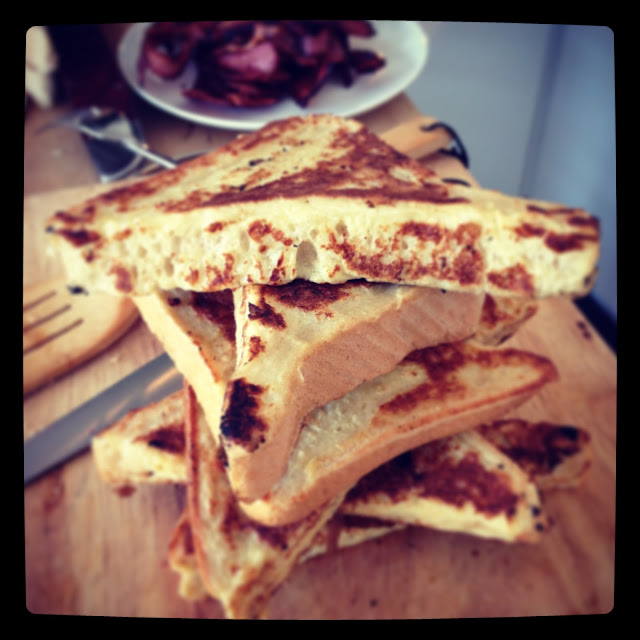 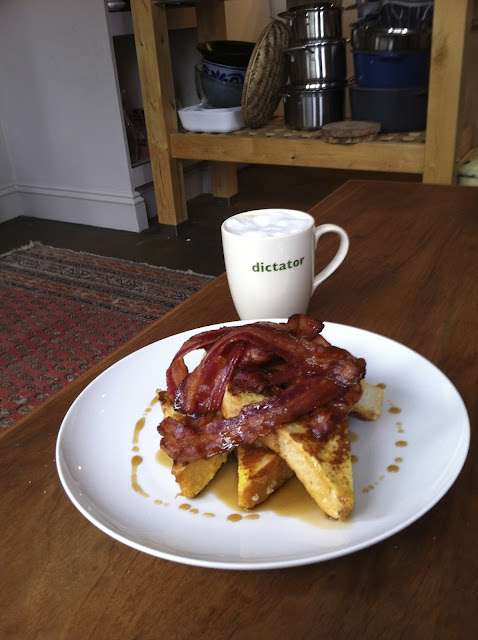 Of course, if you're feeling super healthy (weirdo) but still want french toast (contradiction in terms) then why not try it as GG had a little while ago - forgoing the bacon and using summer fruits instead? 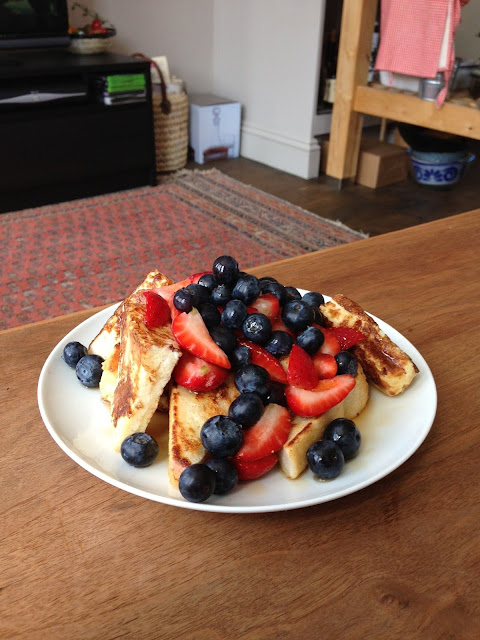 - GrubsterBoy -
* I loved it as a student, but that was many years back now, and in any event our standards were probably more limited – I mean baked beans on toast was considered a delicacy if one sprinkled Worcestershire sauce over it.  One way or another, I notice the reviews online are now pretty poor.  So who knows.