Al-desko dining: Reviews of the busy city worker's lunchtime treats.  Making sure that working lunches are more than just a supermarket value combo.

Directly opposite the Ye Olde Cheshire Cheese, just off Fleet Street, there used to be a little sandwich shop.  You know the kind, run-of-the-mill City place with steel dishes containing mounds of egg mayonnaise and tuna sweetcorn and coronation chicken, filling baps and baguettes as fast as the City boys could order them.  I'm not judging especially – I never went there – but I can't say I noticed it had closed down.

I did, however, notice what sprung up in its place.  Pilpel have been operating quite successfully since 2009, with three branches elsewhere in the City, dolling out prodigious great quantities of grape-shot sized falafel to the monied masses in St Pauls and Spitalfields.  The secret of their success?  The food's bloody marvellous.

Let's start with the falafel.  Eight hefty chunks in each bowl – you can buy it by bowl or pitta (the bowl, with its accompanying salad mountain is by far the better bet, both in terms of meal and value for money).  It's crispy on the outside, and soft, moist and warm on the inside.  I'm no great falafel-expert, but this tastes good to me.  This tastes like what I think falafel should taste like.  So often it's dry, powdery, flavourless fried mush.  Here it feels carefully crafted, assembled, served.  Fantastic. 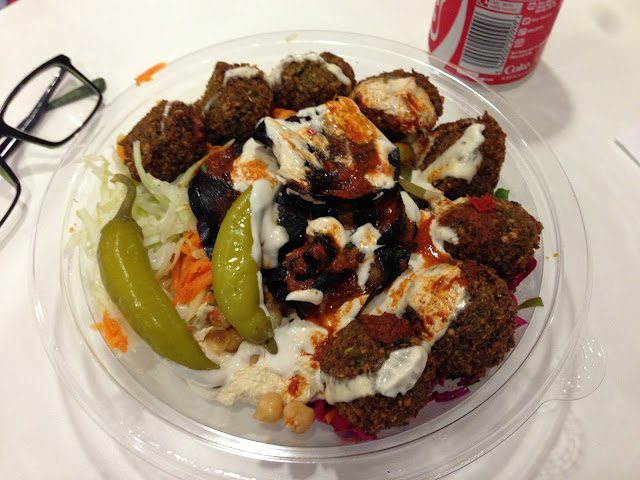 Then there's the salad, and I think this does deserve a little bit of time.  Because in each bowl you get: cucumber, tomato, white cabbage, red cabbage, lettuce, marinated chickpeas, gherkins and pickled chillies.  Then, depending on what option you go for, there's other stuff.  We went for the Mediterranean Falafel Meal and were rewarded humus, tabbouleh and fried aubergines (the latter or which were so wrong and yet so very, very right).  All of it's top quality, and tastes amazing.
Then, as if you don't have enough on your plate already, the whole thing gets drowned in lashings of tahini and chilli sauce.  There's two options of chilli sauce – green and red.  Green's hotter, but has a far more interesting flavour.
Oh, yeah, you also get a pitta bread with it all.  FFS. 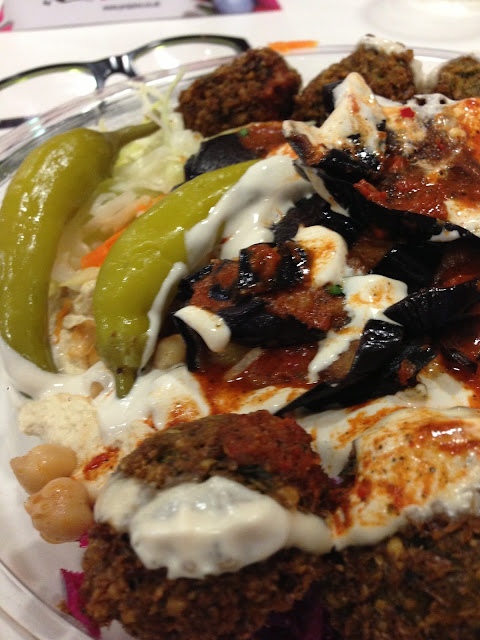 Price-wise, it aint cheap – but good, fresh food seldom is and this is the City, isn’t it?  £5.25 for the meal, which sounds on the cheap stuff, but honestly I can’t think of a place nearby where I get quite as much food for my money.  On that note, it's not the best desk lunch I can imagine for two very good reasons: (a) it's not a tidy meal to eat; and (b) you're going to want a siesta afterwards – by which I mean a nap of several hours to digest it all.  Still, totally worth it.
-GrubsterBoy –
PS: If you're passing by and you see a dude hanging outside Pilpel handing out samples, do not just walk on by.  Grab a falafel ball, give it a chilli and tahini dunk, and grub up.
Posted by Grubster Boy at 14:04