Last night some friends and I hit the Great British Beer Festival at London Olympia.

I heartily recommend it.  Especially if you like beer – by which I mean the flat, cloudy brown stuff, not the cheap, fizzy yellow stuff.  Basically, £10 gets you entry to a massive big room full of – quite literally – thousands of different beers to try.

I'm not going to list out each and every beer – apart from anything else, I can't remember them all.  In total, I must have tried about a dozen and tasted many more.  At the entrance you're asked to buy a glass for £3, which you can either give back (for your money back) or keep.  The glasses are marked: pint, half pint, one-third pint.  I strongly recommend buying thirds only – a friend tried halves before realising, very early on, the error of his ways.  After all, you don’t want to limit yourself to the different varieties you can try!

Having said I'm not going to list them out, here are a few good beers to look out for: the cherry lager and the Aecht Schlenkerla Rauchbier Marzen, on the German stall.  The Rauchbier is particularly interesting, given how it's a heavily smoked beer that smells like the inside of Bodeans and tastes of BBQ ribs.  Watch out though: it comes in at 8%.  The Barum EPA from Devon is a very refreshing drop, as Dancing Duck's DCUK beer, from Derbyshire.  There are also amazing ciders and perrys on sale as well, if that's your kind of thing.  I had a glass of Severnsider, from Gloucestershire, that was at the sweetest end of the range – almost too much so, a little like drinking apple Ribena...

But the star of the show, the absolute humdinger of a beer, was this one.  The Starr Hill Brewing Co.'s Bourbon Barrel Cryptic Imperial Stout.  Hailing from Crozet, Virginia (their address is the fantastically named "Three Notched Road"), this epic brew is aged for two years in old bourbon barrels – a process that adds 3% ABV to the brew, bringing it up to a teeth-sucking 10%.  At that strength, you're not going to want to drink it by the pint – not that you could at the festival, they only serve it by the third – but that's no problem because it's so rich and beefy that you wouldn’t want to.  It's treacly, caramelly flavours are perfectly matched by the a smooth, thick consistency.  I think I'm in love. 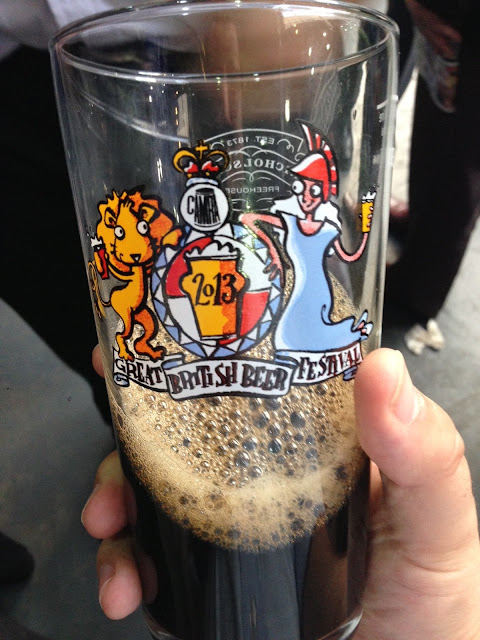 American craft beers are undergoing a real renaissance at the moment – and rightly so, if this drop's anything to judge them by.  Tragically, all the Googling in the world has left me unable to find this particular brew in the UK, but if anyone knows of it, please let me know!

Sure, there's an eclectic mix of people, shall we say, ranging from the city boys with their reluctant girlfriends (who look ever so slightly lost and confused) to the beard-and-cardigan-and-socks-with-sandals brigade, who are deadly serious about this thing.  But it's still a great event – a perfect night out with the boys.

Also, BBC News tells a sad tale this morning.  In some parts of the country pubs are closing at a rate of 22% per year, which is just frightening.  Drinking more beer is apparently the thing to do – CAMRA actually says so – so you should see visiting the Great British Beer Festival as your patriotic duty.