In the middle of Clapham Common, effectively my hometown, is a skatepark.  I don’t really know why, but there's always seemed to be something edgy about it, even gritty.  When I was a little boy it felt like a spot where the cool kids might hang out, somewhere I should avoid or else face the consequences.  Not threatening exactly, more somewhere that you needed some kind of unspoken, informal membership to participate in.  And I definitely didn’t have that. 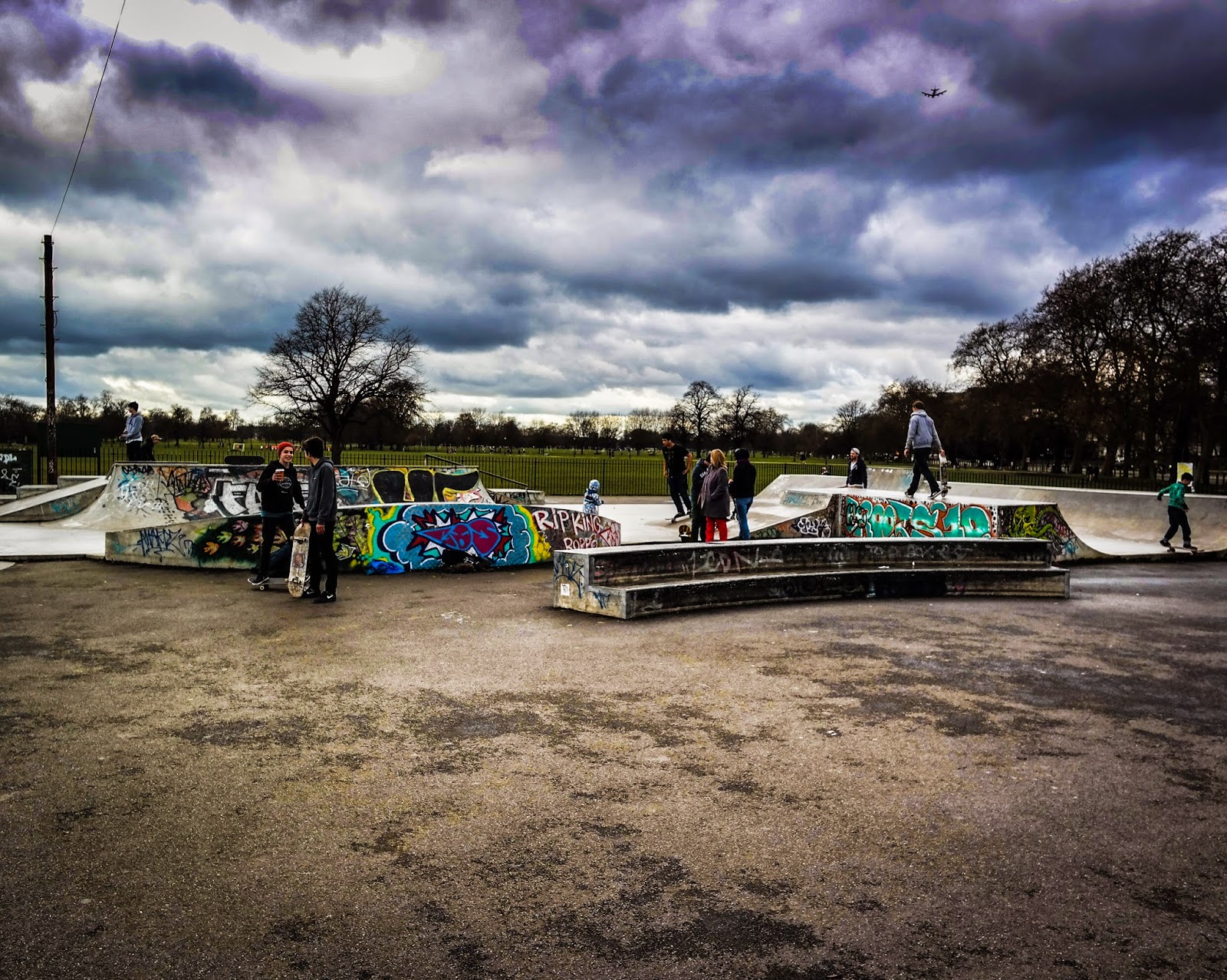 As a 30 year old man I now know better.  The five year old zipping along on his scooter amongst the bigger kids with their decks belies that old stereotype (look carefully, centre of the picture).  But it remains, for me at least, a spot that still has a certain childhood allure of the gritty, trendy hangout.

So when I head that Fields, a new café / restaurant, was opening up in the hut next door, I knew that I finally had my way in and could visit unquestioned. 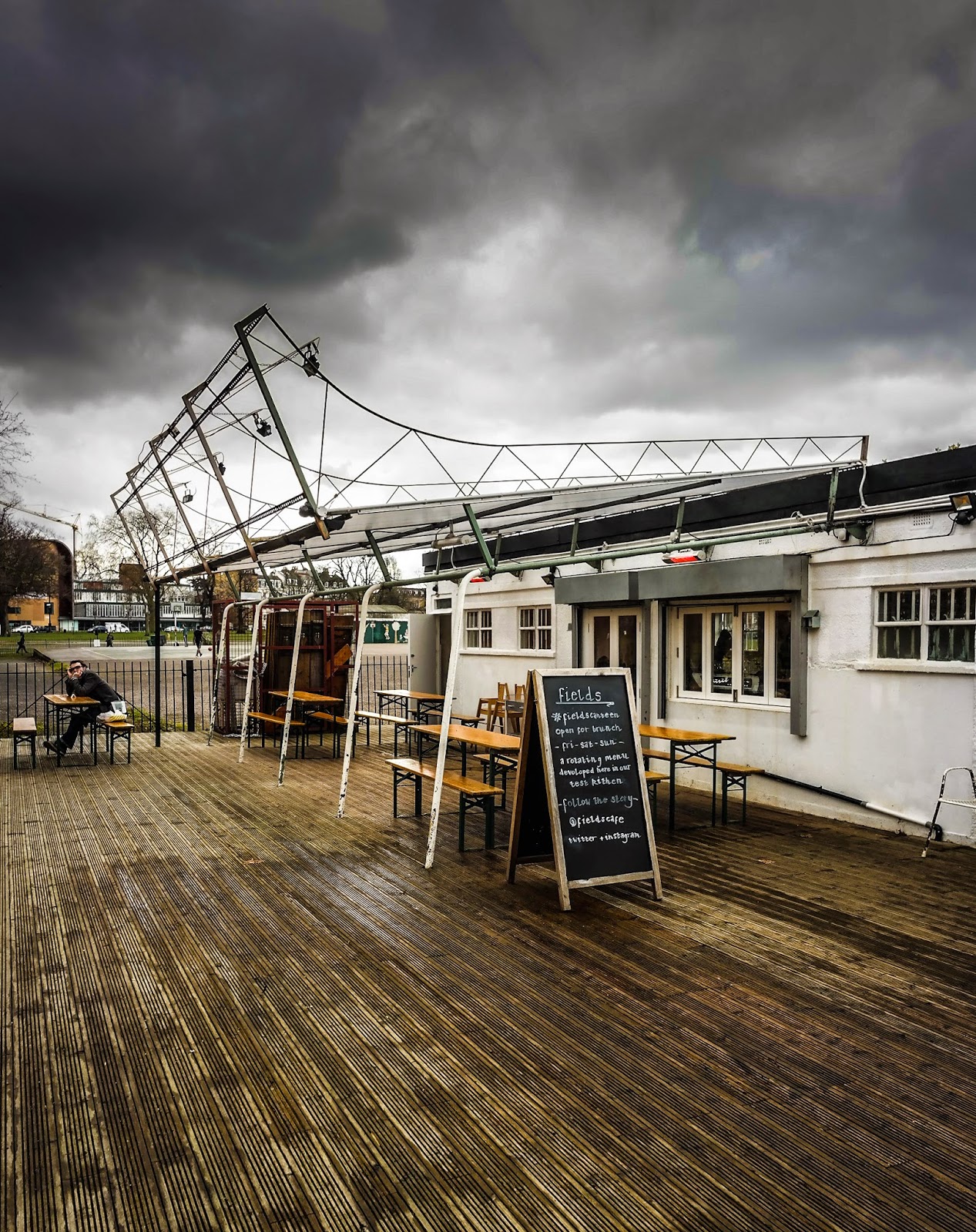 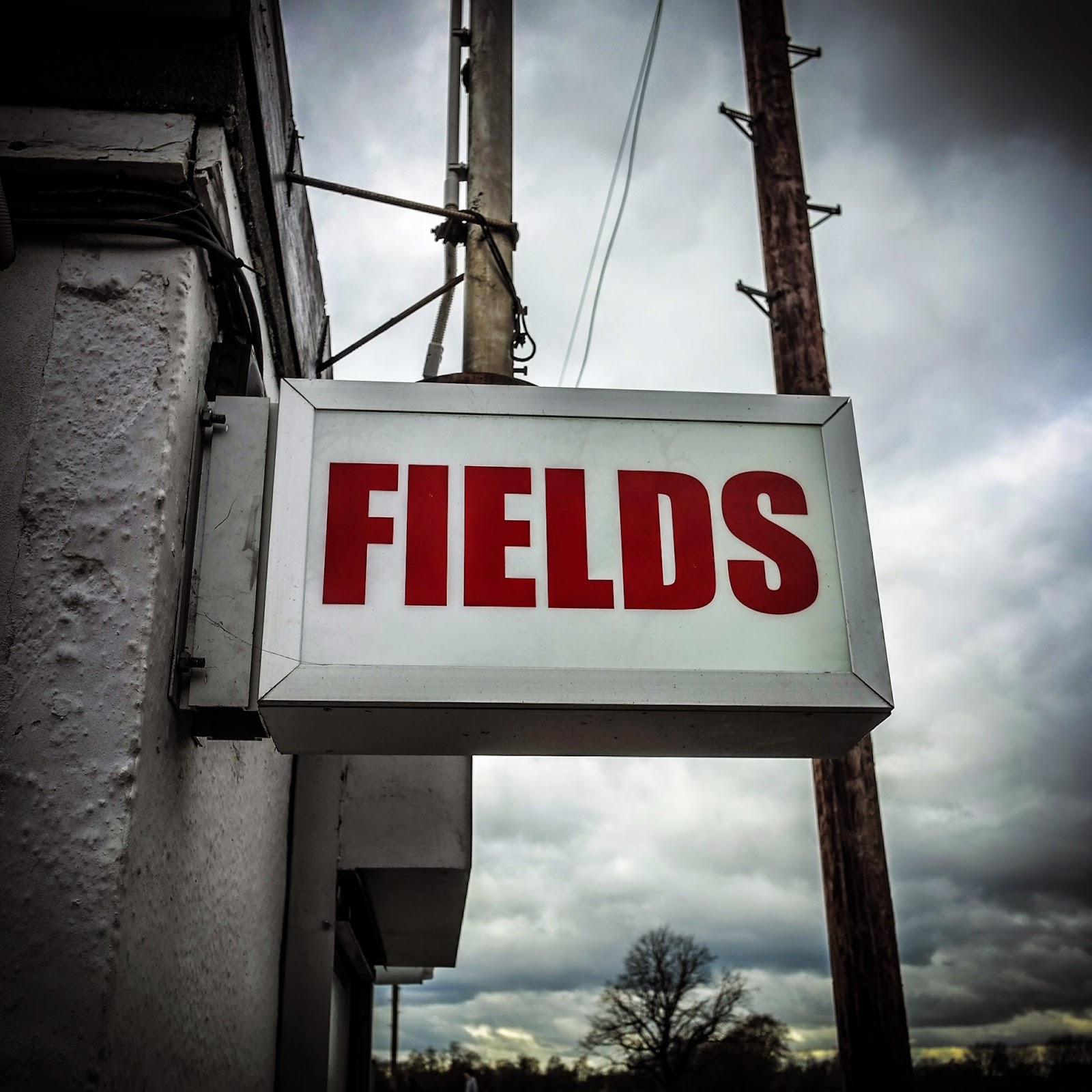 Fields is the second spot opened up by the people behind M1LKin Balham.  We've been down to Balham on a Saturday or Sunday morning quite a bit recently and have been shocked by what we've seen outside M1LK.  It's crazy.  Proper block-long queues.  Fields doesn’t quite suffer the same problem – perhaps because there is little passing trade, it being in the middle of the Common rather than off the high street.  But it still gets busy.  I've visited twice now, once at midday and once at 10am, and both times been able to get a seat immediately.  But on both occasions I have seen queues forming.

It's definitely trendy chic.  You can just feel the various staff and punters itching to beard-up and hipster-out.  The water bottles are labelled government juice.  But unlike so many other places, here it works, here it seems natural even sensible to be a bit hipster.  And for all its gritty surroundings (if, it is these days even that gritty any more) inside it's welcoming, warm, homely (in an admittedly utilitarian way). 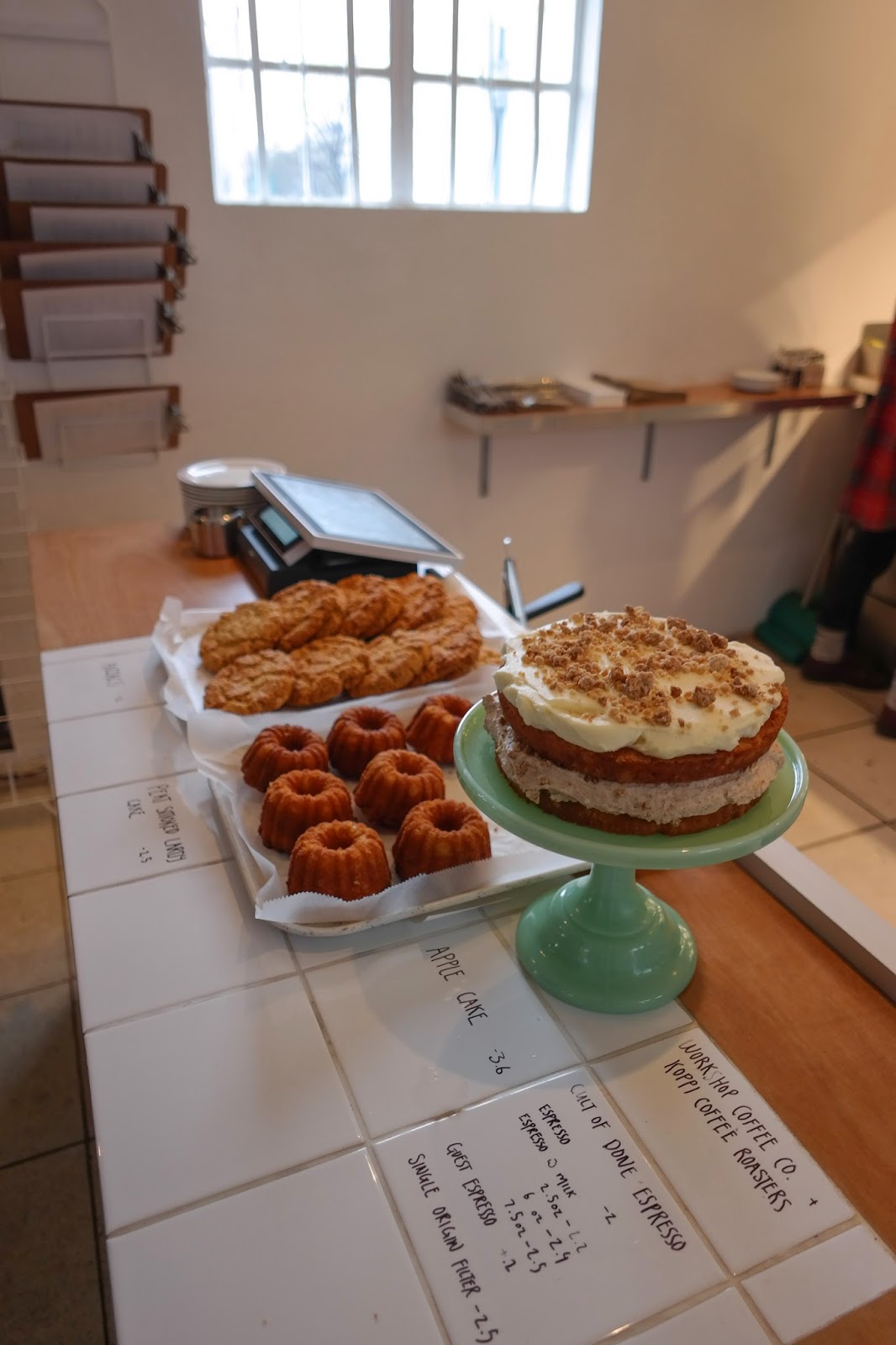 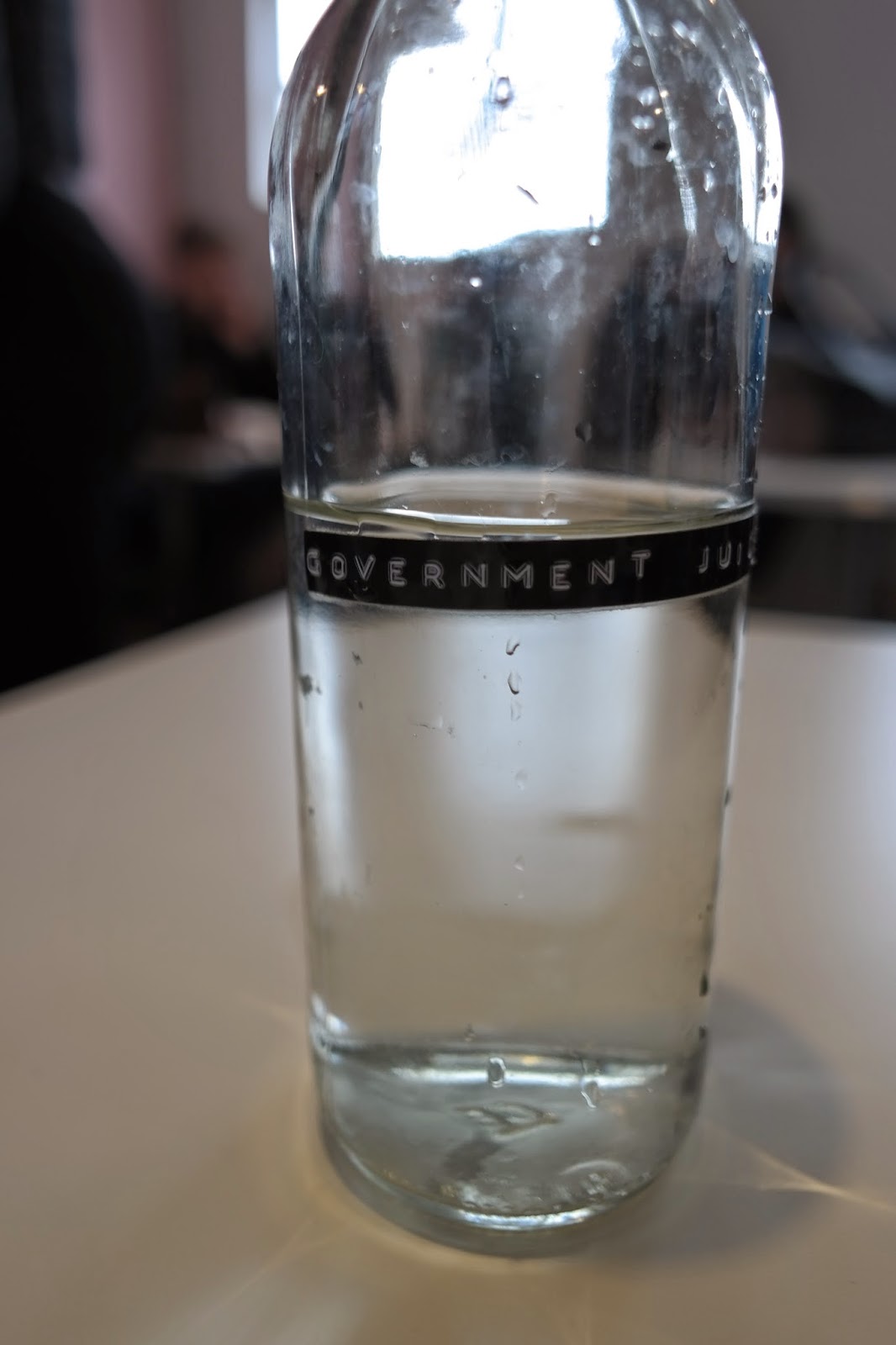 We settled in and ordered up.  First out was the coffee, a delicious dark roast with only a slight twang of acidity (I like my coffee to taste like coffee, not citrus fruits, thank you). 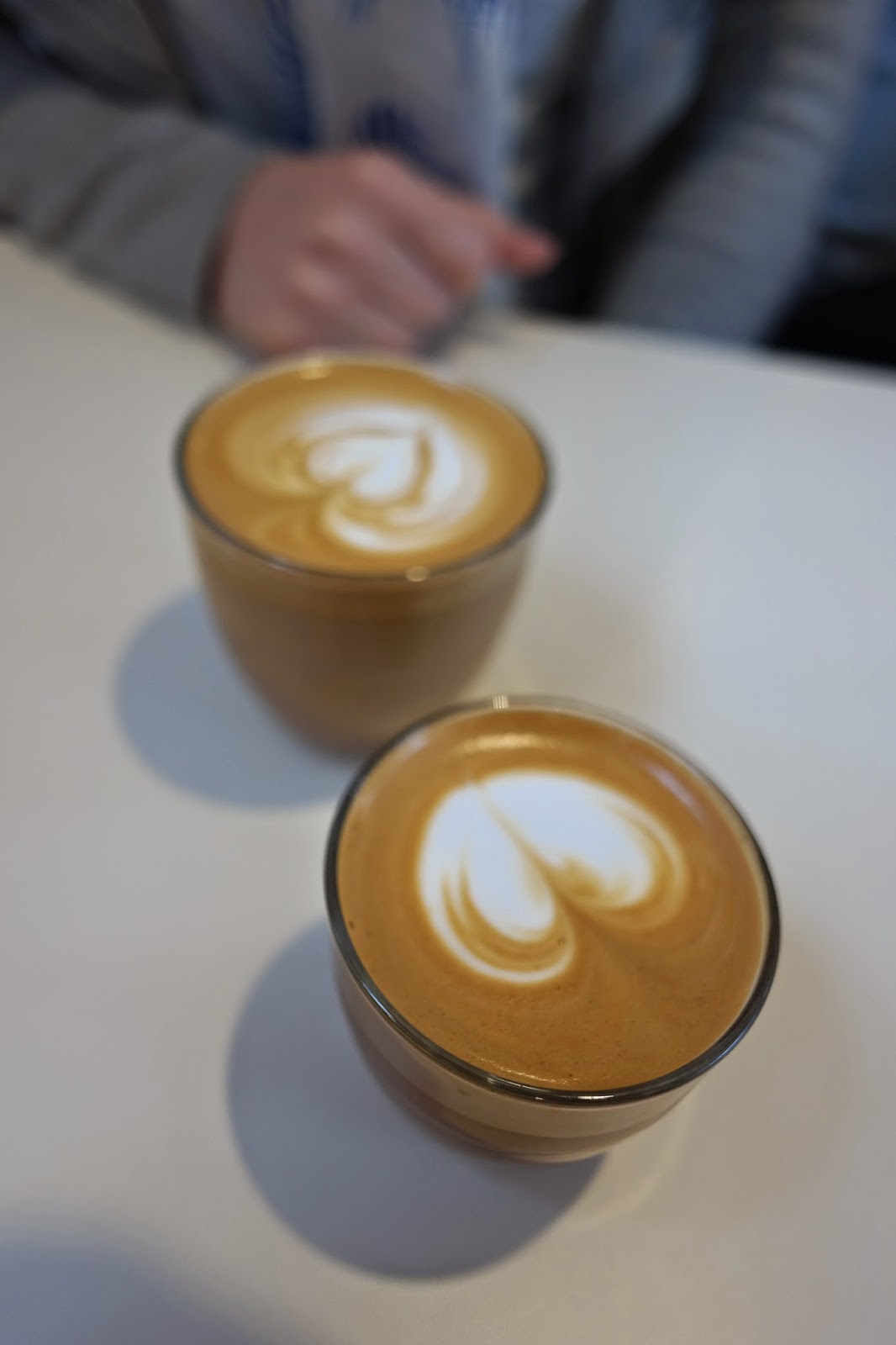 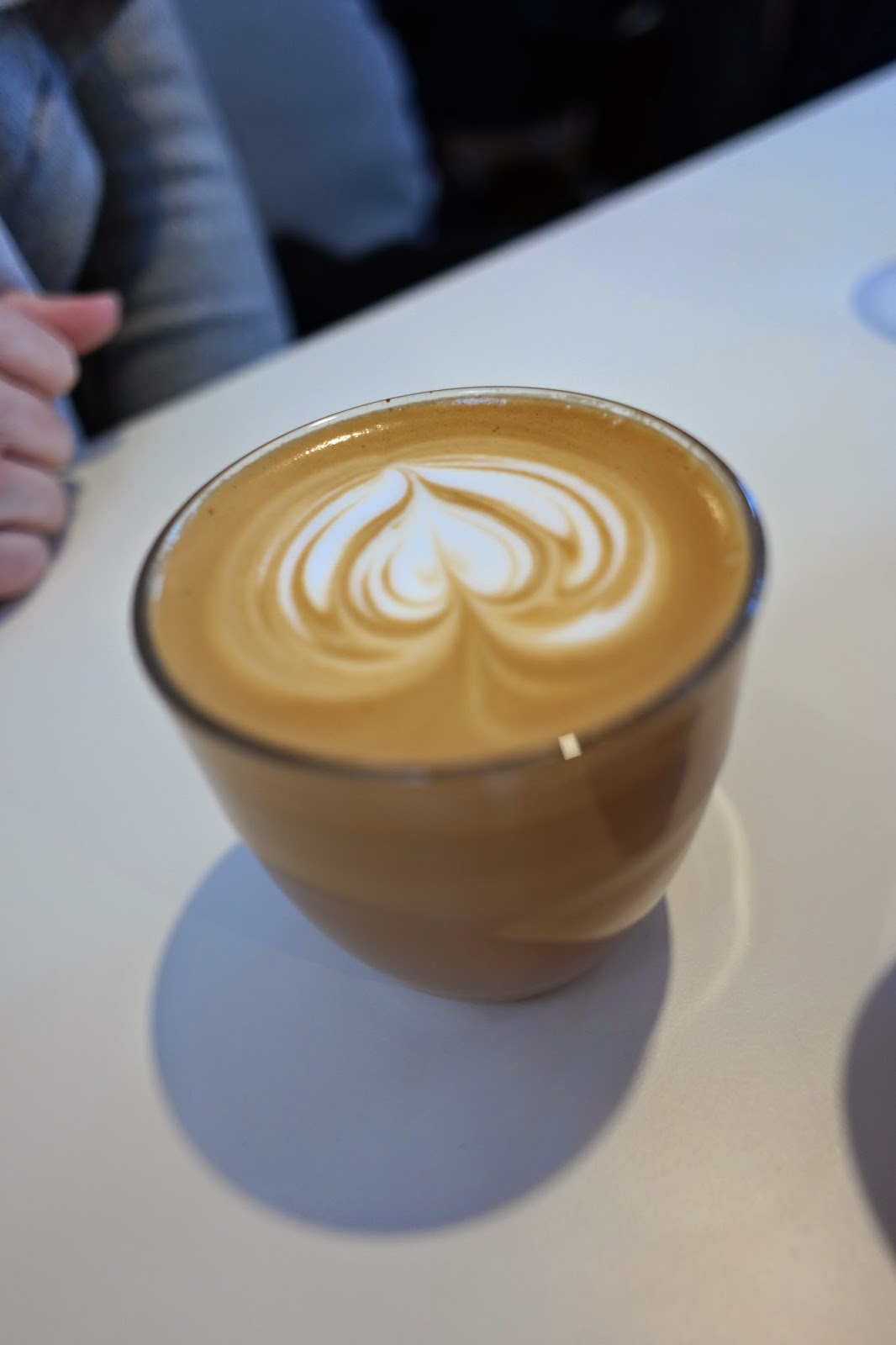 Coffee is ordered in a slightly unconventional way – essentially you order on the basis of how much milk you like with your espresso – 2.5 oz (macchiato / flat white), 6 oz (cappuccino) or 7.5 oz (large cappu / latte).  It’s a quirky idea and I'm cool with that.  The coffee is amazing, so no complaints whatsoever.

On the alternative-to-coffee front, this is my one disappointment.  GrubsterGirl ordered the nettle presse thinking it might be homemade.  It wasn't, which was a shame, albeit a delicious one.  My note to the restaurant is provide some juices.  Seriously.  Everyone's doing it these days.  And I really, really like juice to go with a cooked breakfast. 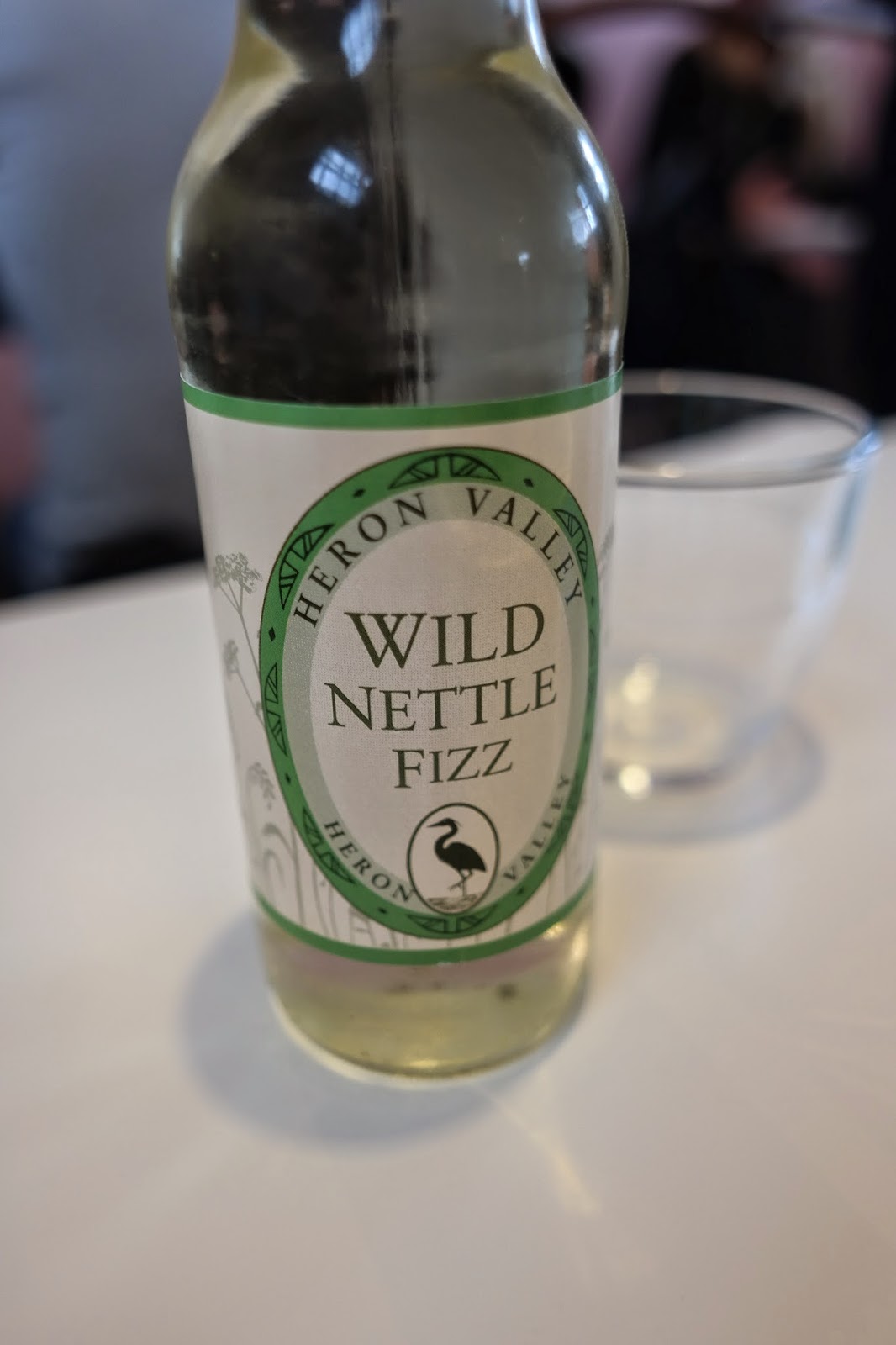 Food (which needs to be ordered at the kitchen counter) came out rapidly.  First up was homemade crumpets, hay smoked goats' curd and Wandsworth honey. 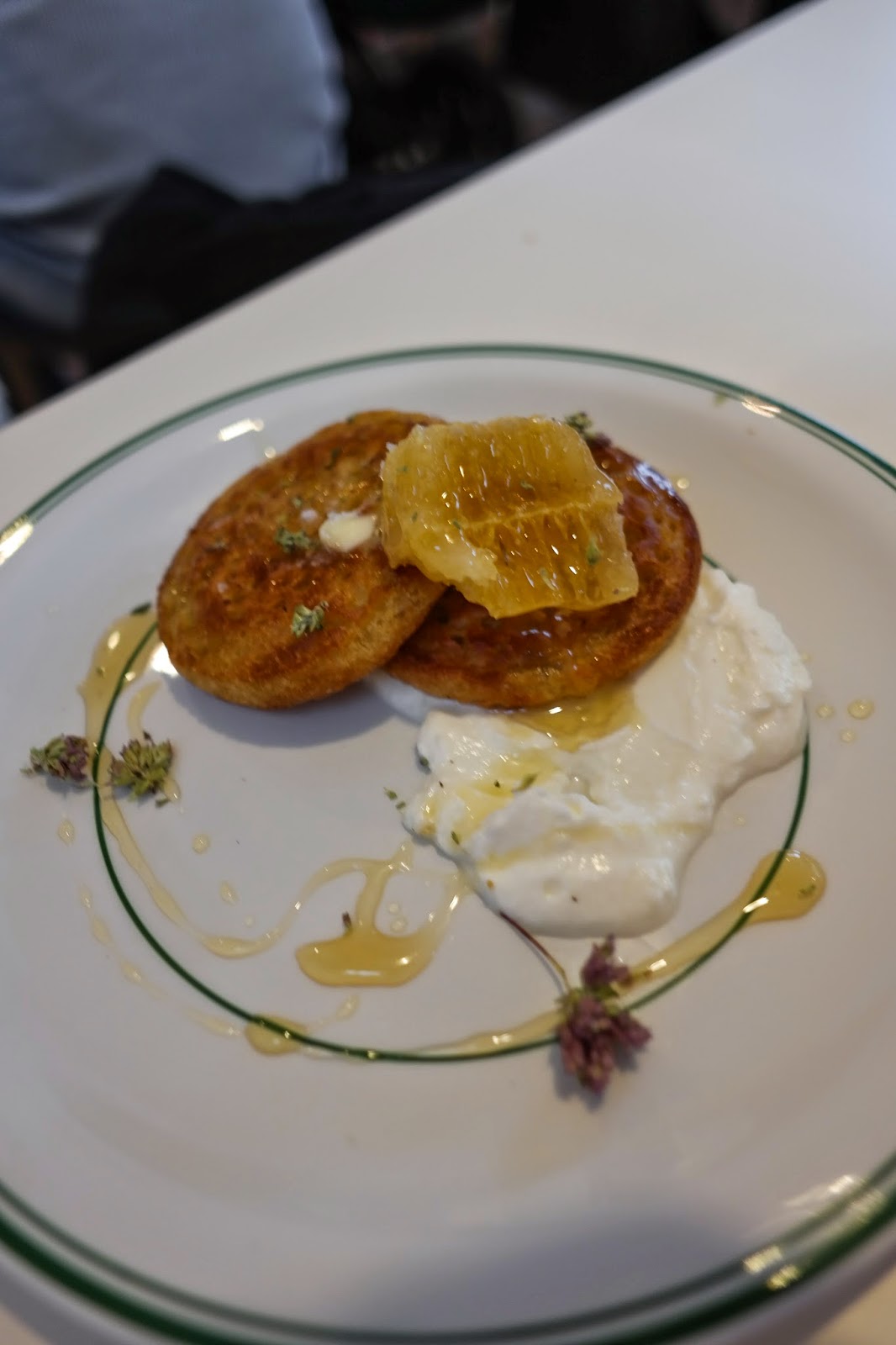 This was a treat and a half.  GrubsterGirl has not stopped going on about them – and she is a fierce critic of brunchfoods.  They were spectacularly done.  Light, fluffy crumpets twinned with tangy curds and sweet honey.  Triumphant.

At the other end of the brunch spectrum was Fields' twist on that most classic of brunchfoods, the eggs benedict. 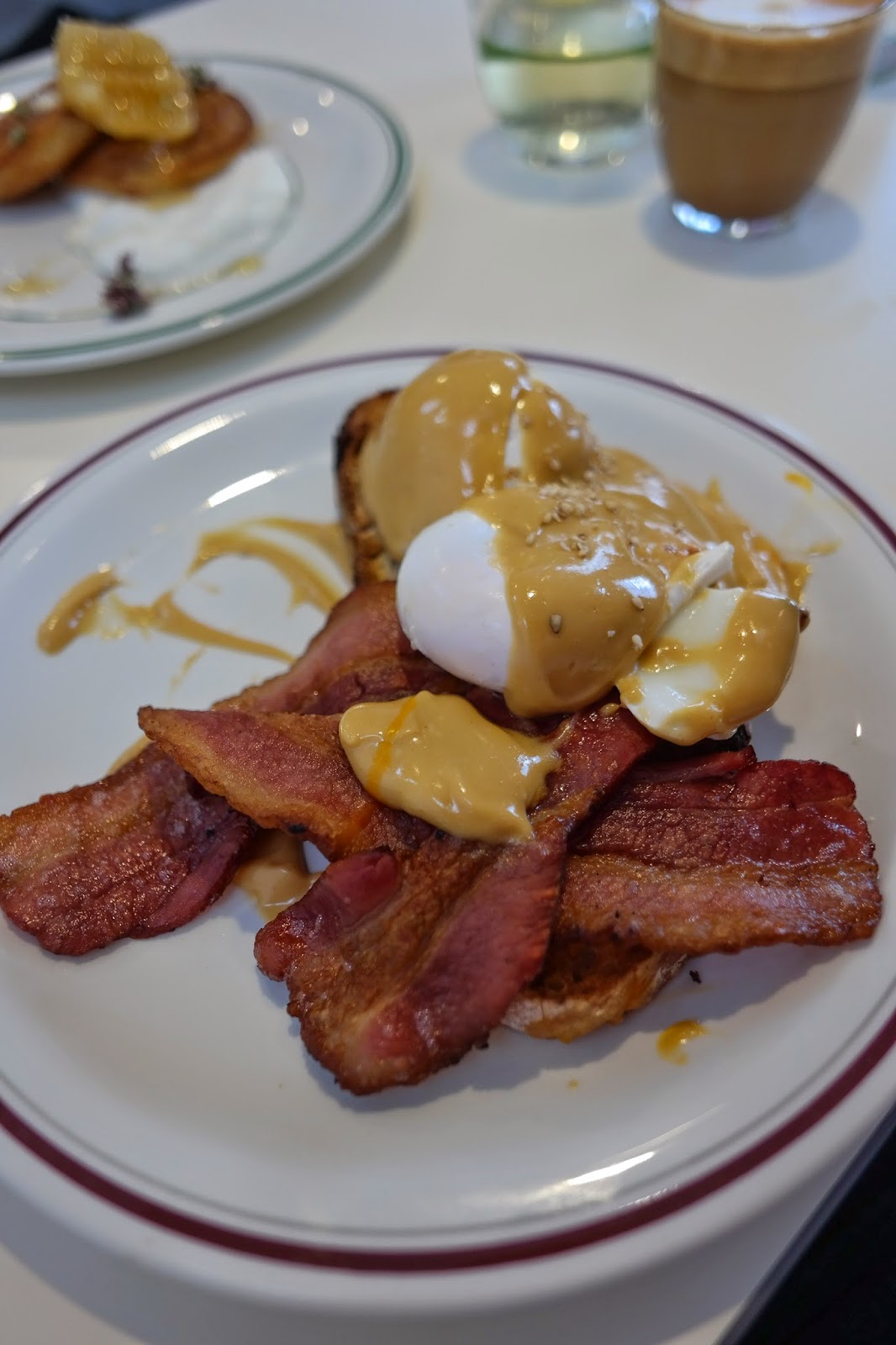 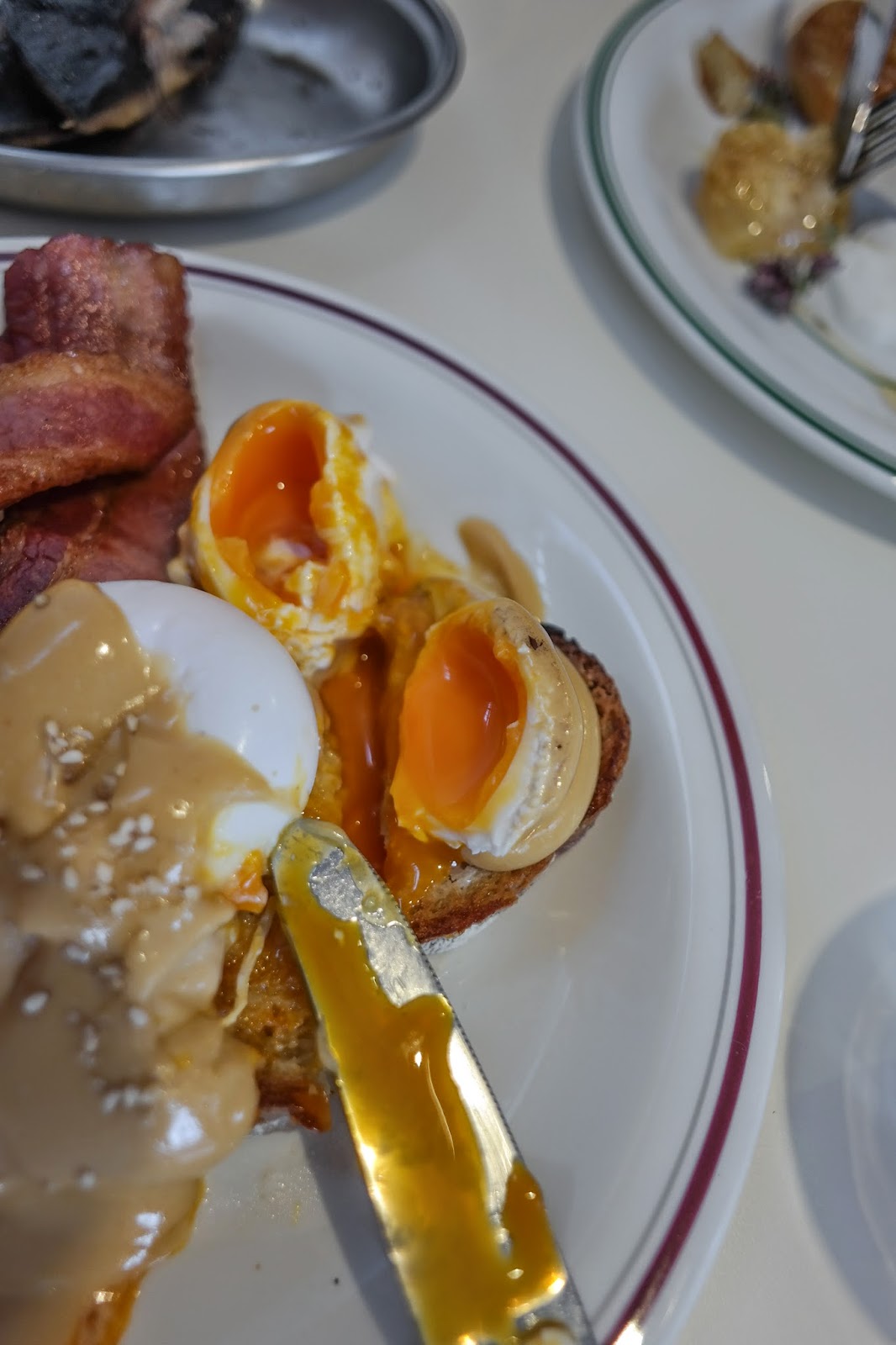 In this case, the only thing left resembling the humble benedict was the poached egg.  And rightly so, because holy moly these guys know what they’re doing.  You've got homemade sourdough toast subbing out the plain English muffin, coal-grilled drycure bacon kicks bland ham in to touch and, unbelievably, the hollandaise sauce is infused with – wait for it – espresso.  Yes, this is one pimped eggs benedict.

The outcome?  Marvellous.  Fantastic.  Hands down triumph, I could eat down every morsel without pausing for breath and happily order up a second round if my arteries didn’t stop me.  This is, quite simply, a ten out of ten dish.

I supplemented it with smoked field mushrooms. 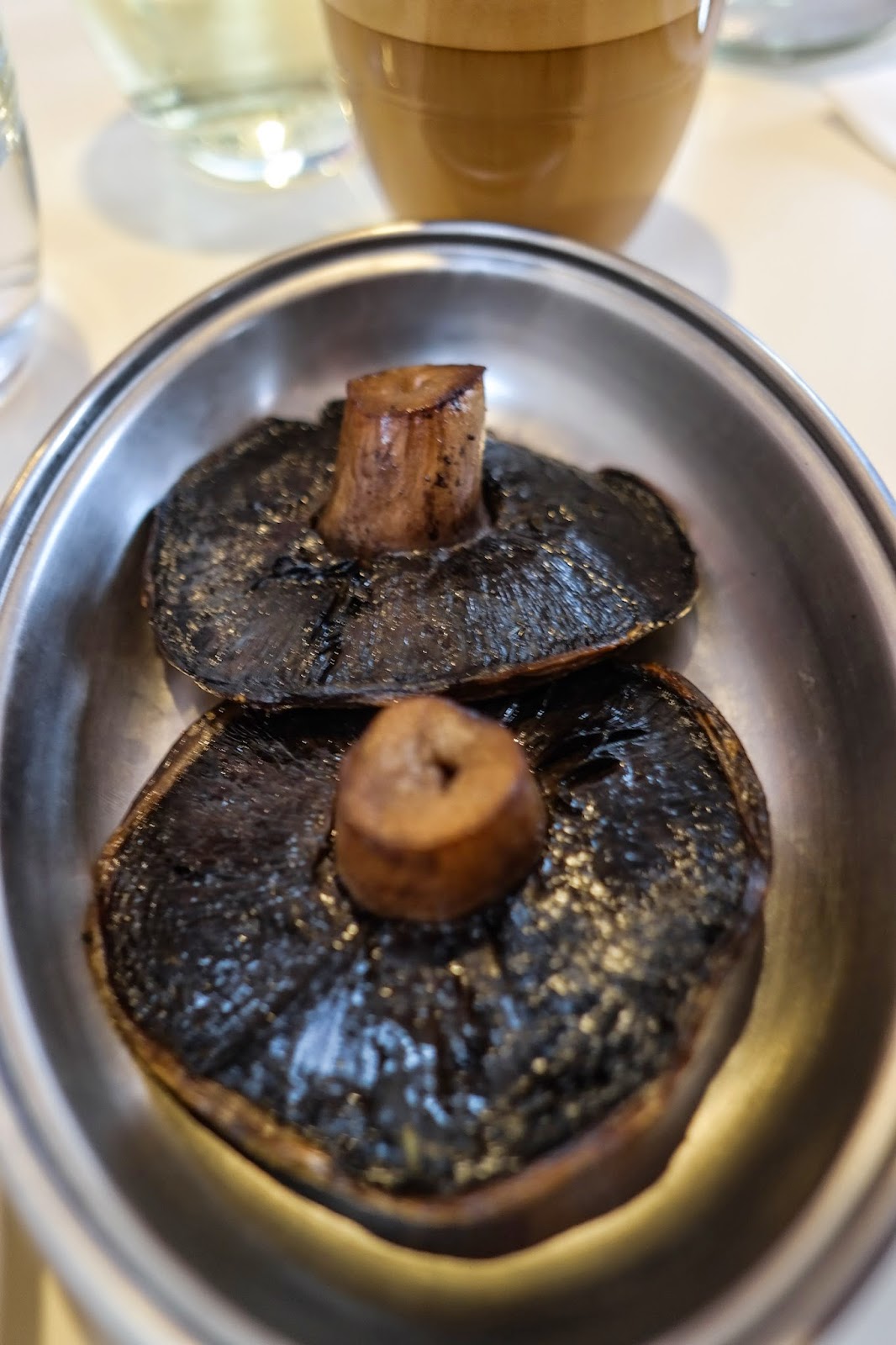 These were delicious.  As a note, they like smoked stuff at fields.  Everything is cooked over coals and the menu even tells you what they are smoking with each day – on our visit it was Suffolk birch wood.  This seems a good time to drop in their laudable efforts to support the local economy as well – where possible they try to bring stuff in from nearby, be that the honey made (is honey made?) in Wandsworth, the bacon sourced from the local butchers, or salmon from a smoker on Stoke Newington.  Locally sourced produce is not always easy to achieve in the metropolis, but at least they are making an effort.

Last out, a croquet madam. 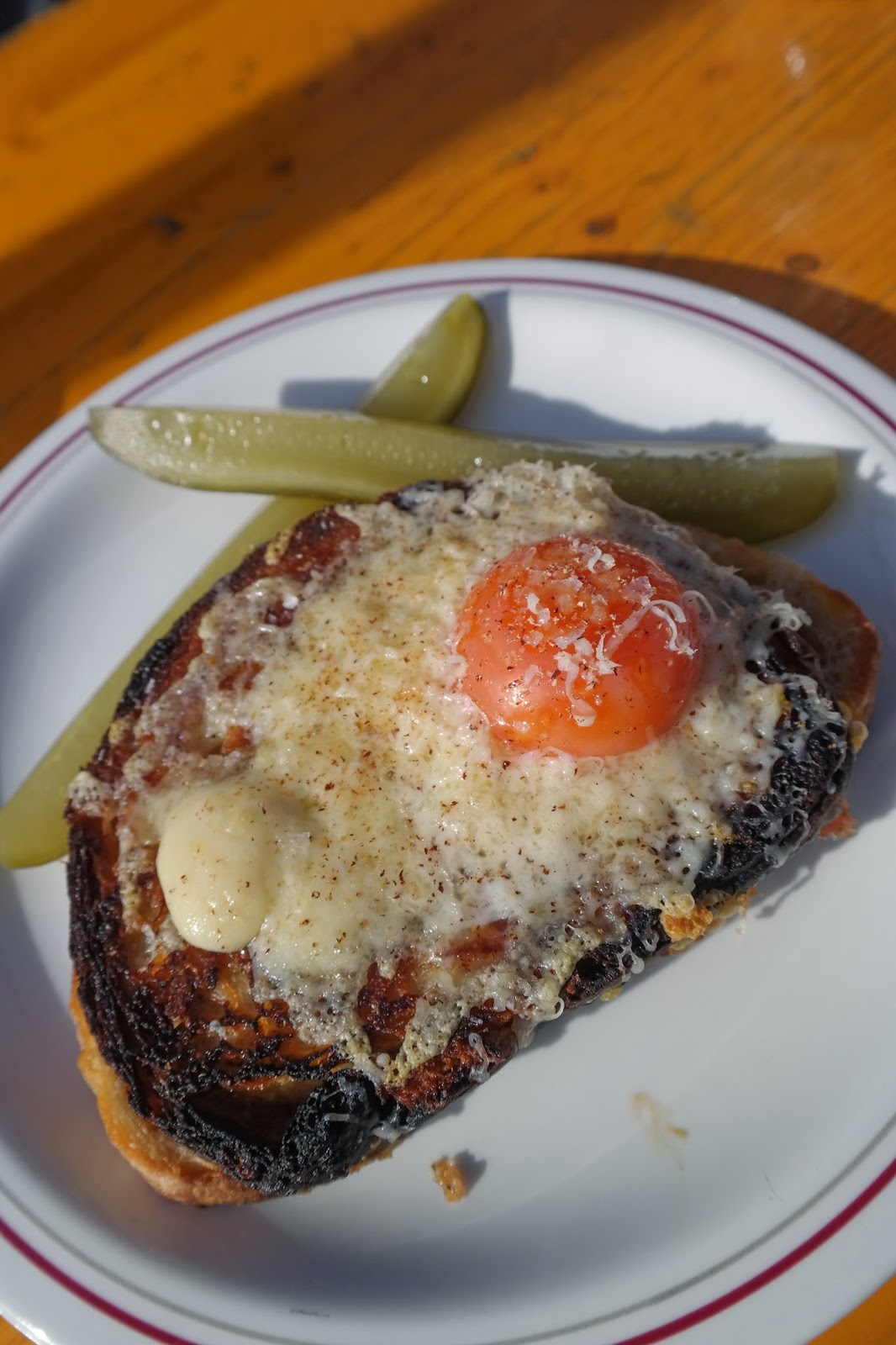 I had to look up the difference between a croquet madam and a croquet monsieur.  Basically the madam is the same as the monsieur except with a poached egg on top.  Or, in Fields' case, a smoked egg yolk – a perfectly oozy beautifully orange sphere.  This too met the standards that the other food had reached, except perhaps for the pickles which were a touch flaccid.

Would I go to Fields again?  I already have.  It's fantastic.  I sat out in the sun the second time (they have a big terrace which is heated in colder weather) and it was almost more glorious than the first time around.  I'd go every week if I could – and I probably could, it's nowhere near as expensive as I had expected or as its rivals seem to charge.