This is totally not my recipe at all, but one from the wonderful Nutmegs, Seven - a blog run by Elly McCausland.  It was designed to be cooked on a BBQ, and to be honest I think it would benefit from being so cooked (the yogurt marinade would work much, much better).  Nevertheless, not everyone has outside space and even if we did it's cold / wet most of the year, so there ought to be scope for doing this in the kitchen as I did.  Cooking this under the grill would probably be (a) nicer, (b) more sensible and (c) healthier.  My grill is shit so it went in a pan instead.

Also, whilst I have no doubt that this dish would be vastly improved by allowing the chicken to marinate overnight, I didn’t have that kind of time – it was a post-work supper.  Marinating time aside this is a remarkably quick and easy dish to make of an evening – so think of it as a simple supper.  There is that niggly hour between steps 1/2 and 3 – but if you could get them done in the morning before work you'd be good to go by the time you get home.

To the extent that I have departed from Elly's recipe – largely in terms of ingredients – it is due to not having stuff in. 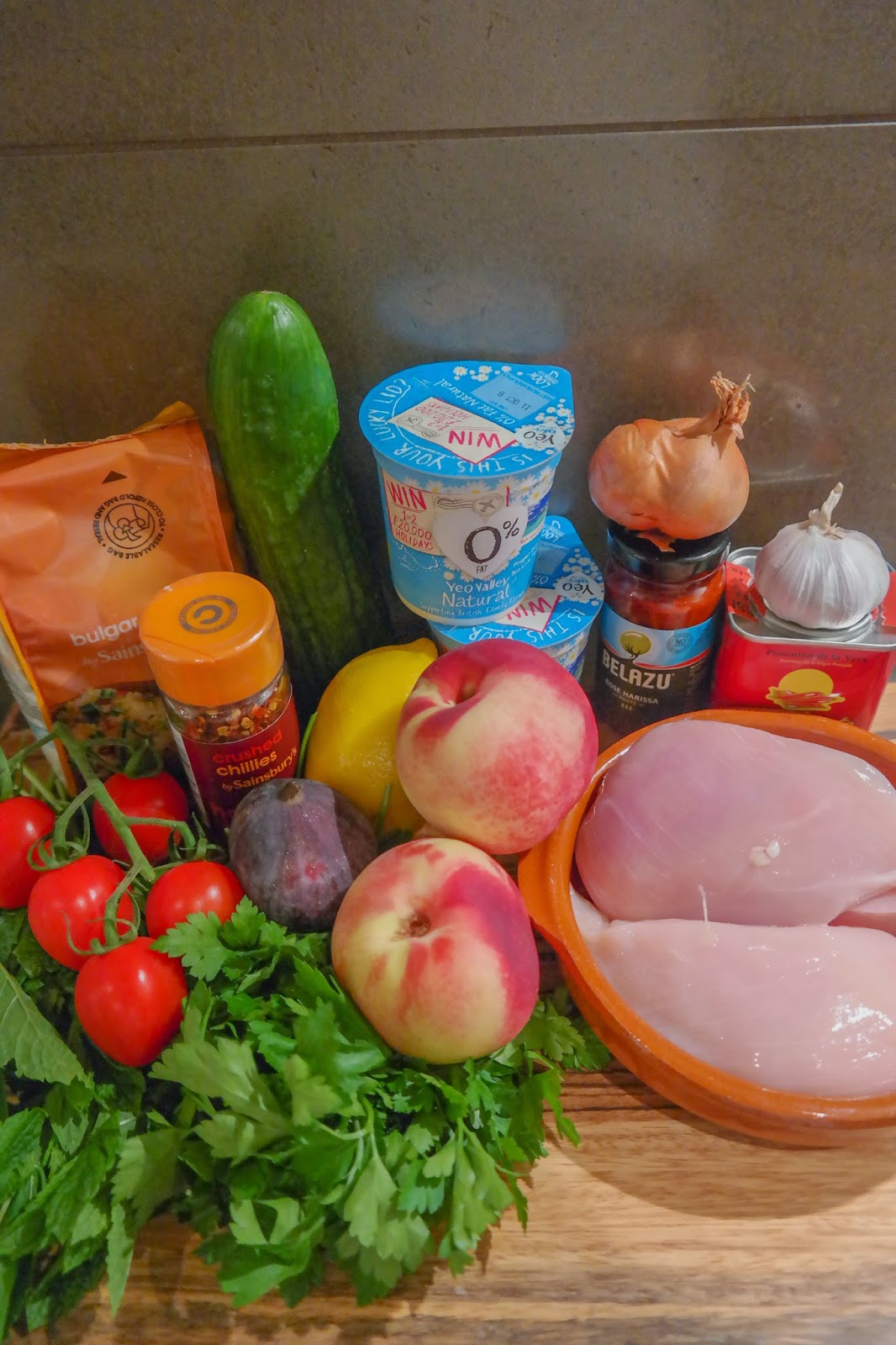 1. In a big bowl mix the yoghurt, harissa, chilli flakes, paprika, garlic (crushed) and olive oil.  I didn't have the lemon salt that Elly suggested so I used some smoked Maldon sea salt (a product I own simply as a result of not paying enough attention in Sainsbury's one time).  Slice the chicken breasts horizontally so that you end up with two 'steaks' of the same area but somewhat thinner – these will cook quicker and the surface area is increased so the marinade should mix better.  Douse the chicken in the marinade and stick this in the oven – ideally for an hour at least.  Pour yourself a drink and relax for an hour, you've earned it. 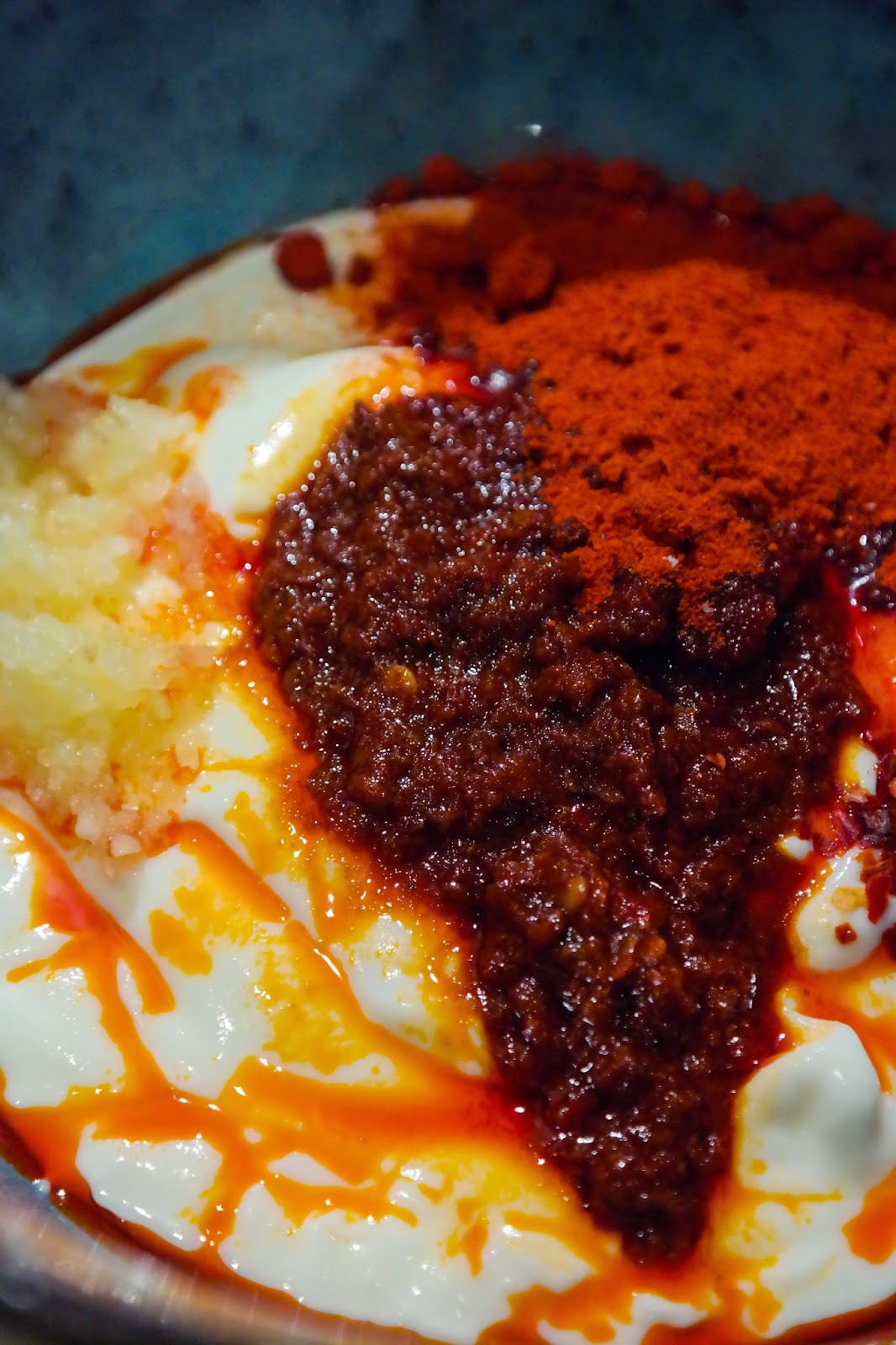 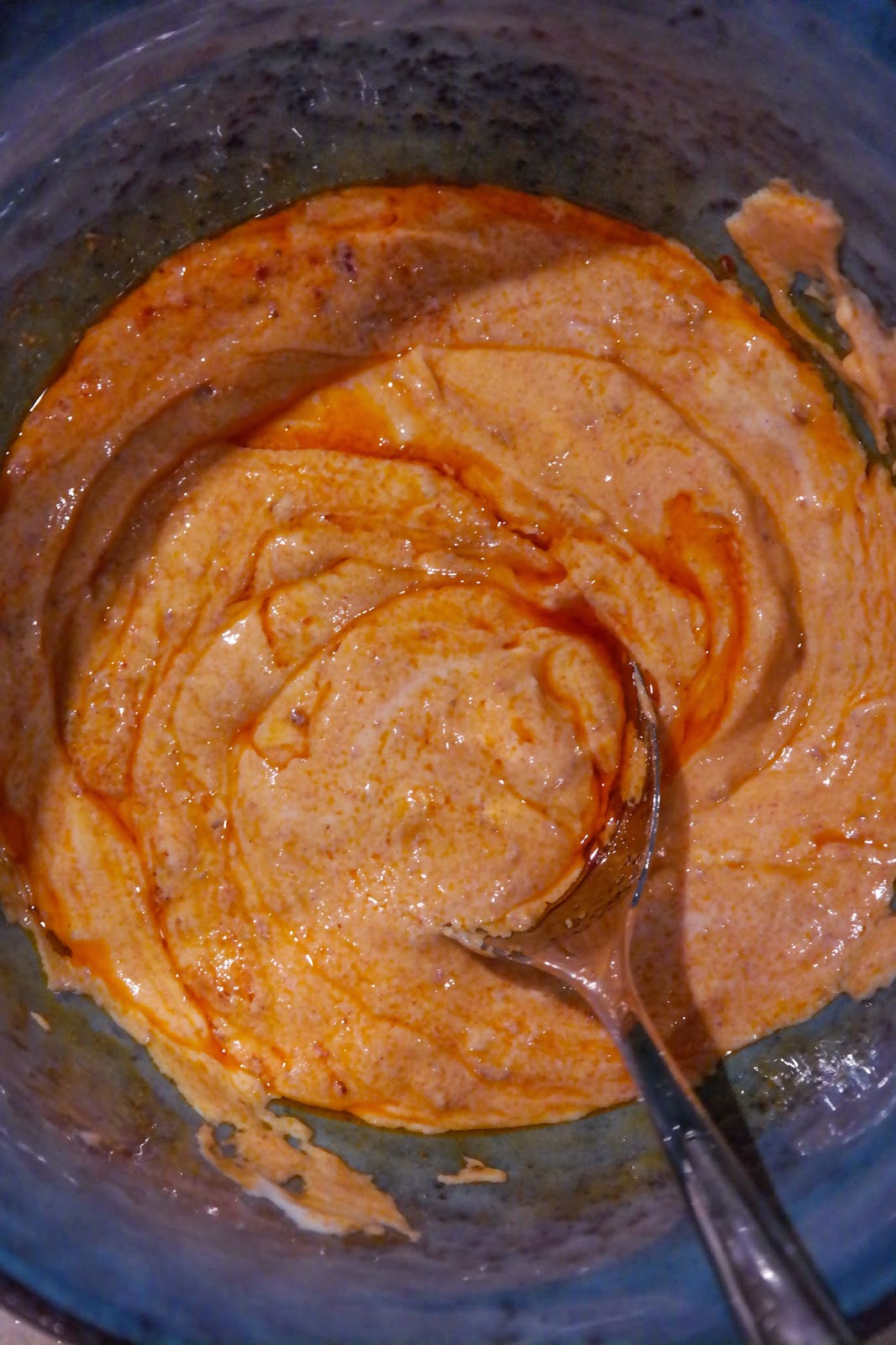 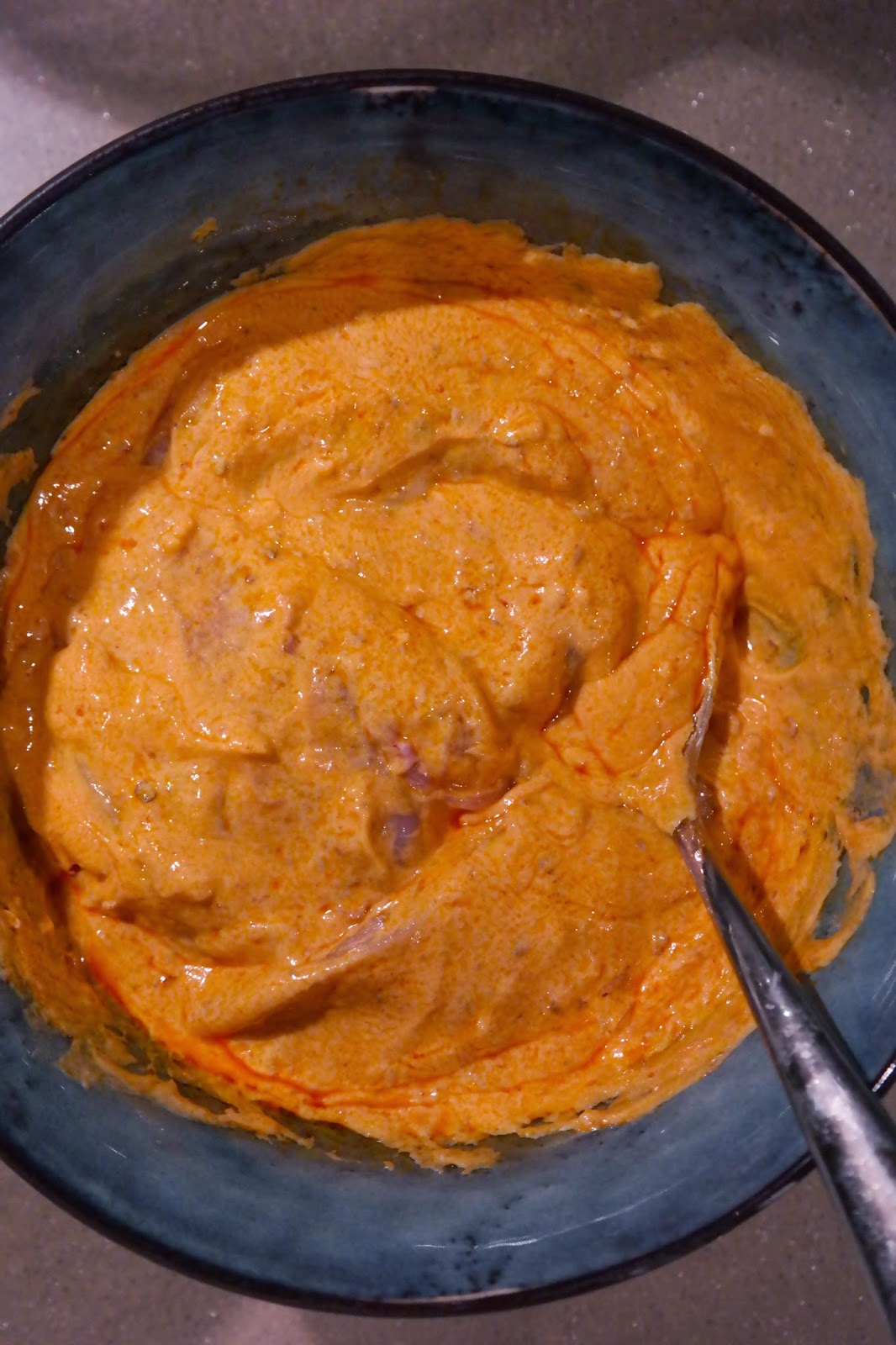 2. Actually, before pouring that drink, do one more thing: prep the bulgur wheat.  Place the wheat in a large heatproof bowl and pour boiling water over it to cover and then add about half a centimetre.  Set that aside for, again, about an hour.

3. To make the tabbouleh, peel, de-seed and chop the cucumber into little half centimetre cubes.  Chop the tomato into about the same size cubes.  Chop the shallot as finely as you possibly can.  Roughly chop the parsley and the mint.  Mix everything into the (now softened) bulgur wheat.  Season to taste with salt, a lug or two of olive oil and the juice from the lemon.  It needs to be quite sharp, so you'll probably need all the lemon juice, but start with half and add to suit your own tastes.

4. Slice the peaches around their equators and twist to separate them whole from the stone.  That knobbly bit inside, by the way, is what they make amaretto out of, not almonds.  Anyway, I digress.  Get the griddle pan on super-hot before brushing it with a little olive oil.  Don’t use an actual brush, the bristles will melt.  Instead, very, very carefully rub it lightly with a couple of pieces of kitchen towel that have been oil-dunked.  Places the peach halves cut-side down onto the griddle's ridges and cook for about 4-5 minutes before turning and doing the other side.  I had a spare fig in the fridge which joined out peachy friends quite happily. 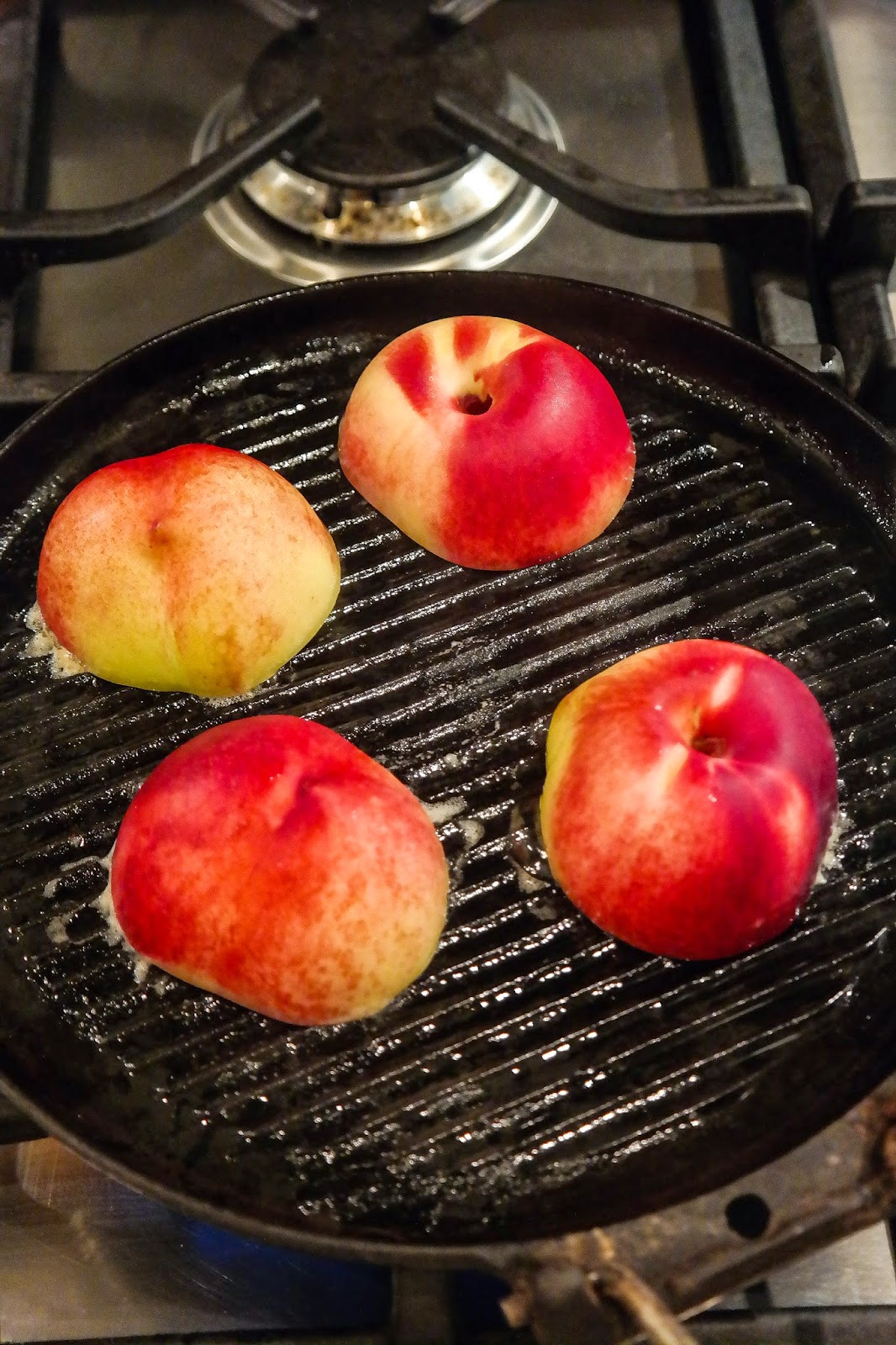 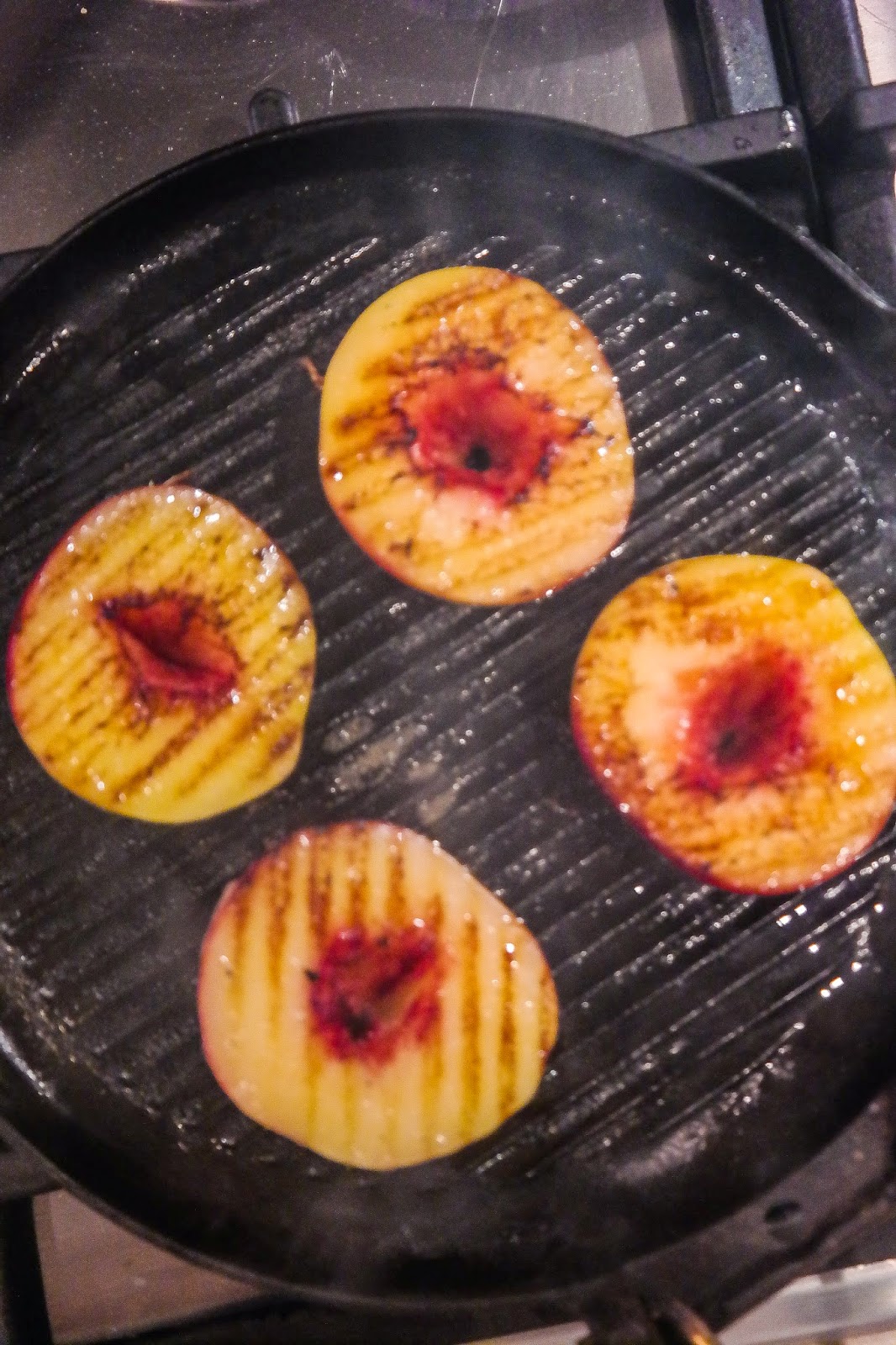 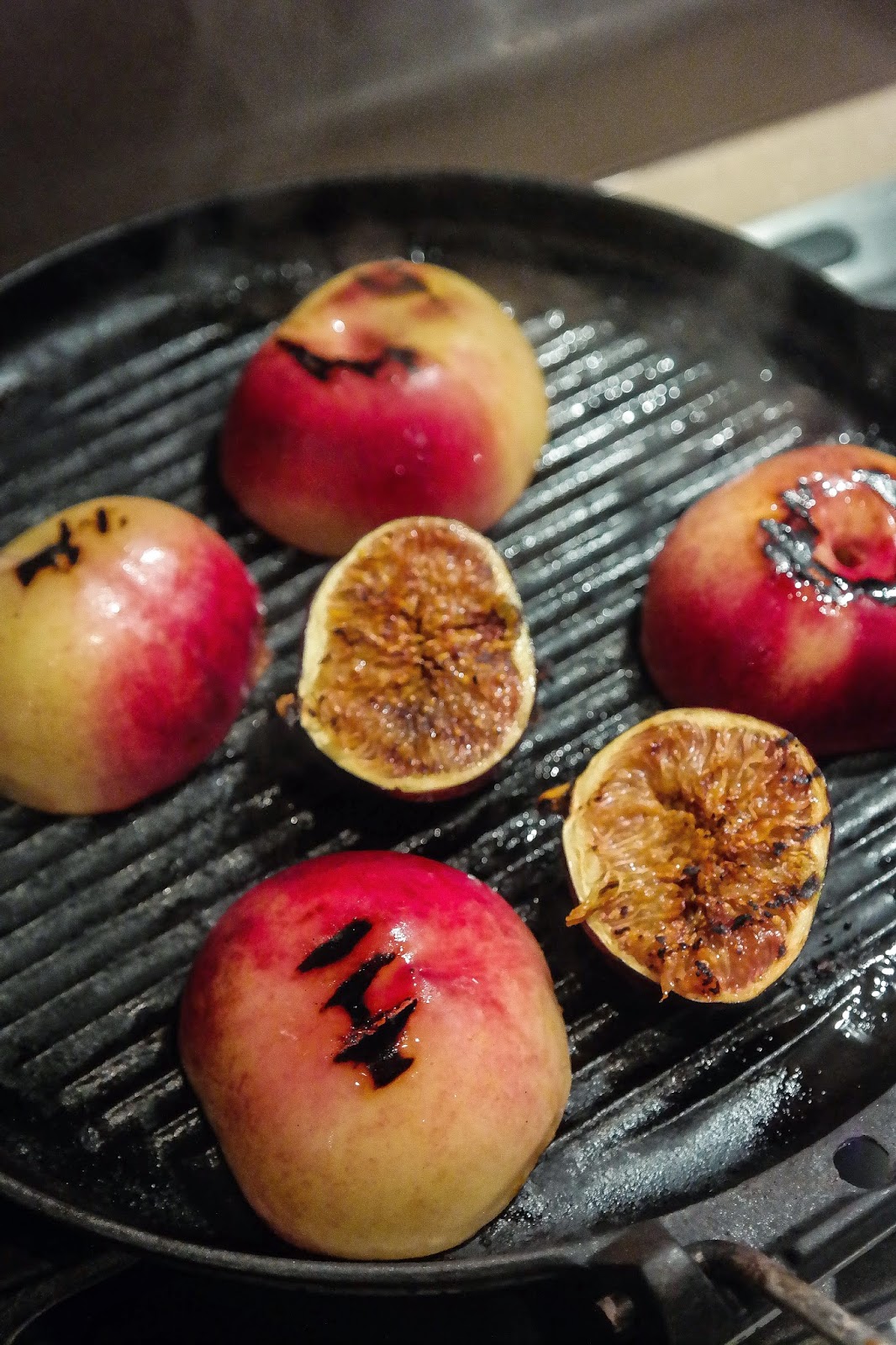 5. At the same time, get a frying pan onto a medium heat as well.  This needs to be a non-stick pan.  Like really, really needs to be a non-stick pan.  It will get stuff stuck to it.  When it's hot, fish the chicken pieces out of the marinade and, leaving plenty of the marinade still in situ, place them carefully into the pan.  This will produce a lot of fizzing and spitting as the water in the yoghurt is separated out and the fat in the same melts out.  Cook this liquid off (to the extent that it's possible) and keep going until the meat browns on the bottom.  Then flip it over and give it the same treatment on the other side. 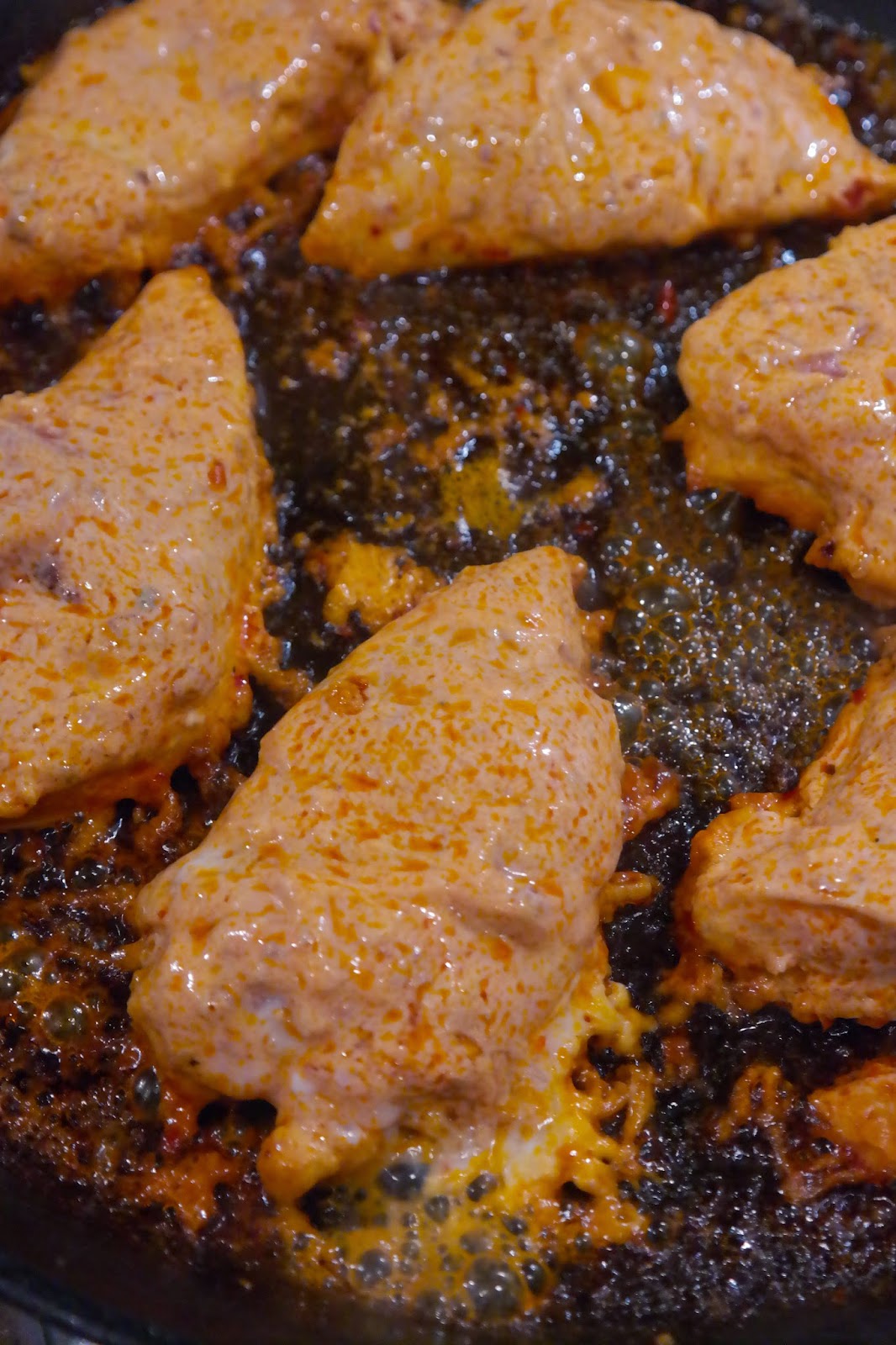 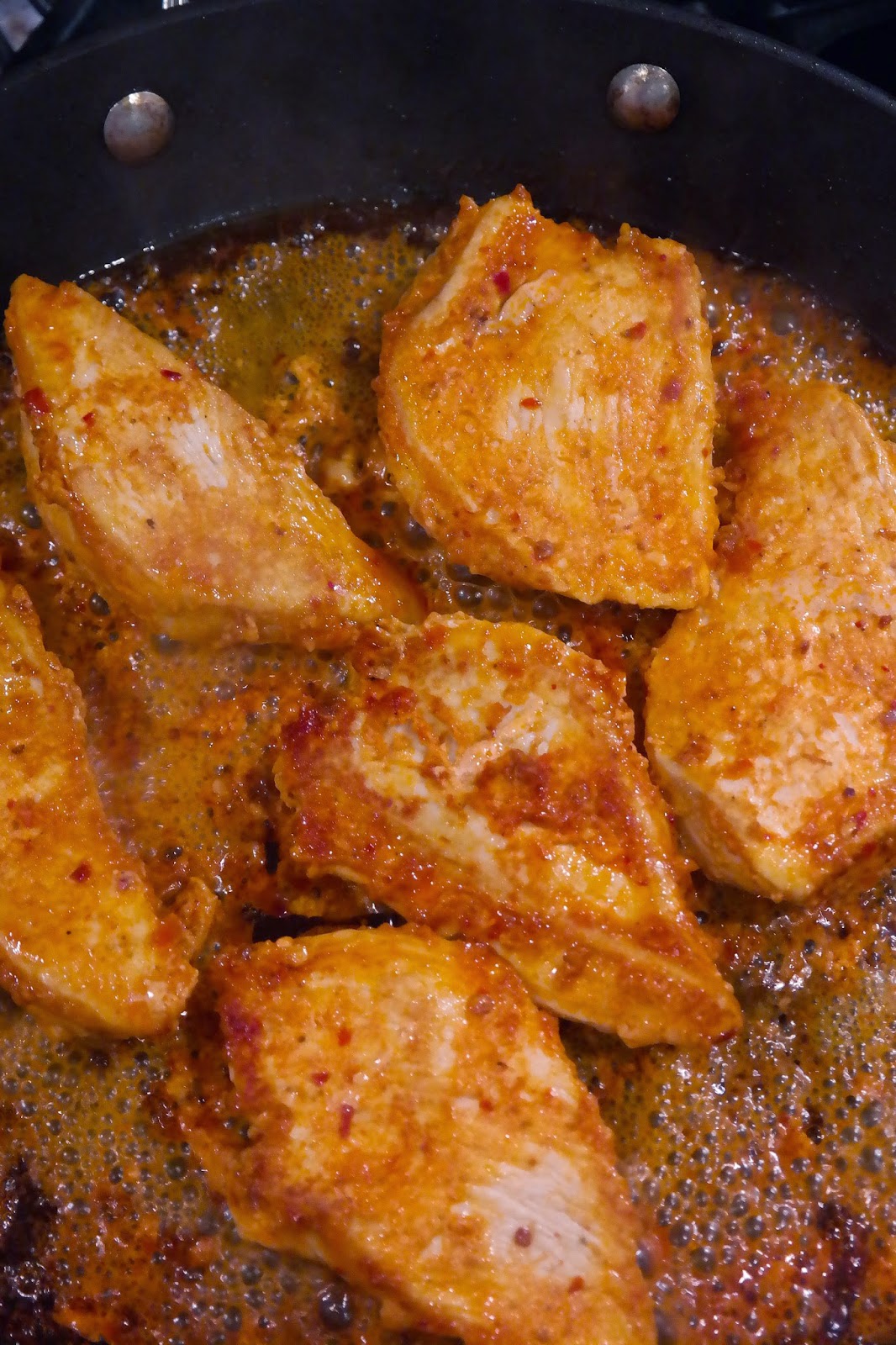 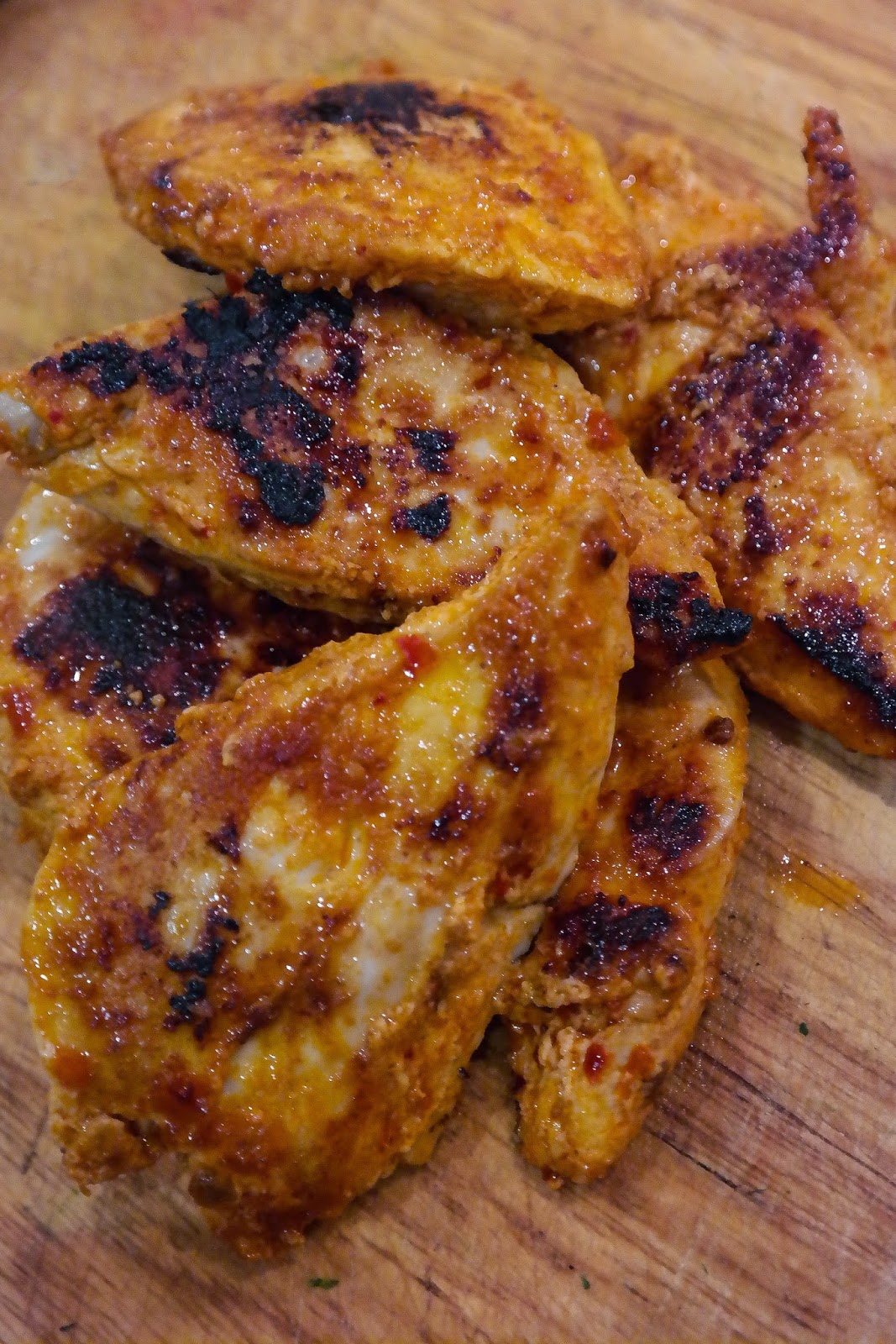 6. Allow the chicken to rest a while whilst you dish up.  Drizzle the pomegranate molasses over the peaches (and the meat, and the taboulleh, and really anything else you feel like – although bear in mind it's quite a strong, sharp taste). 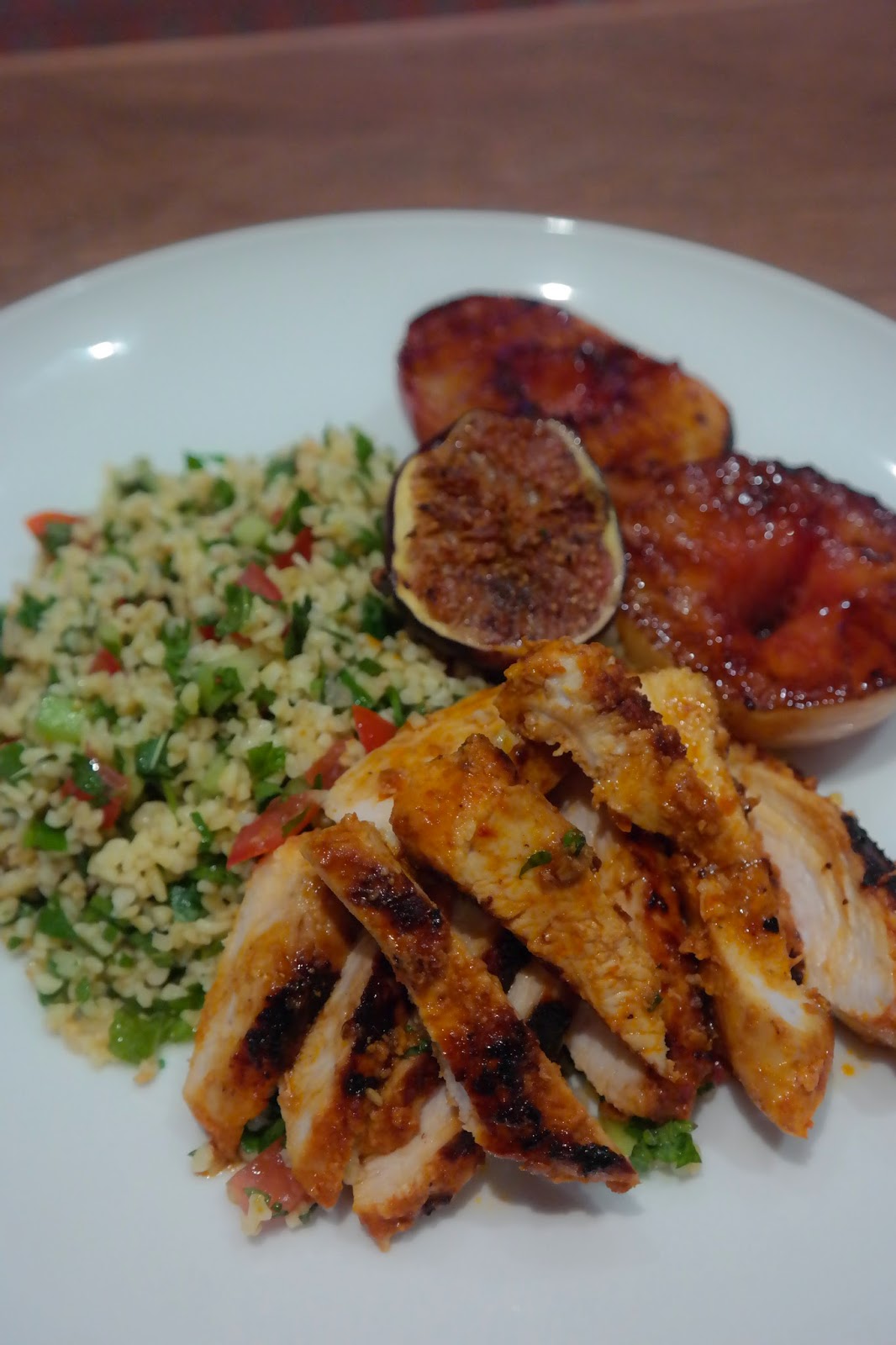 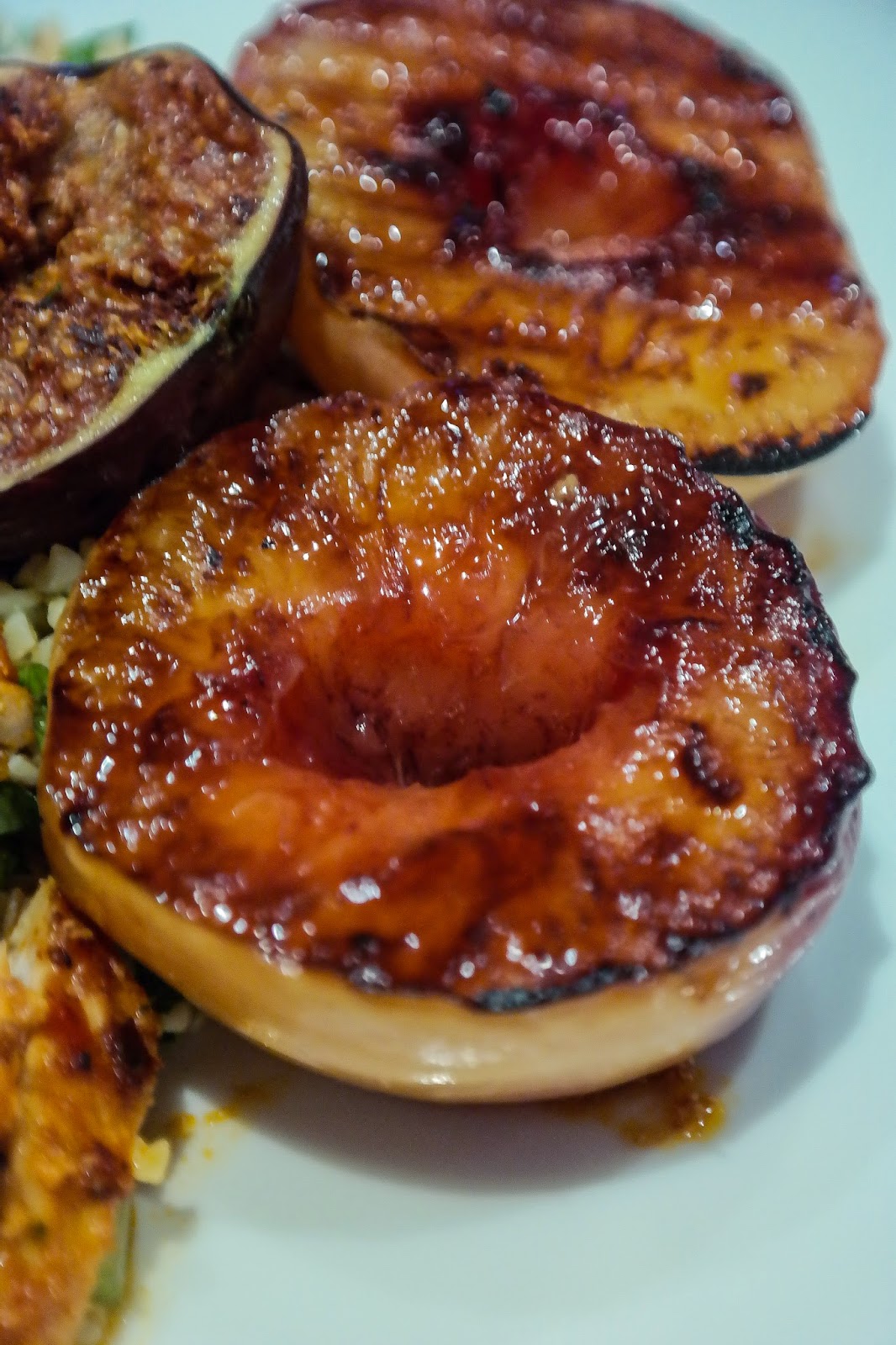 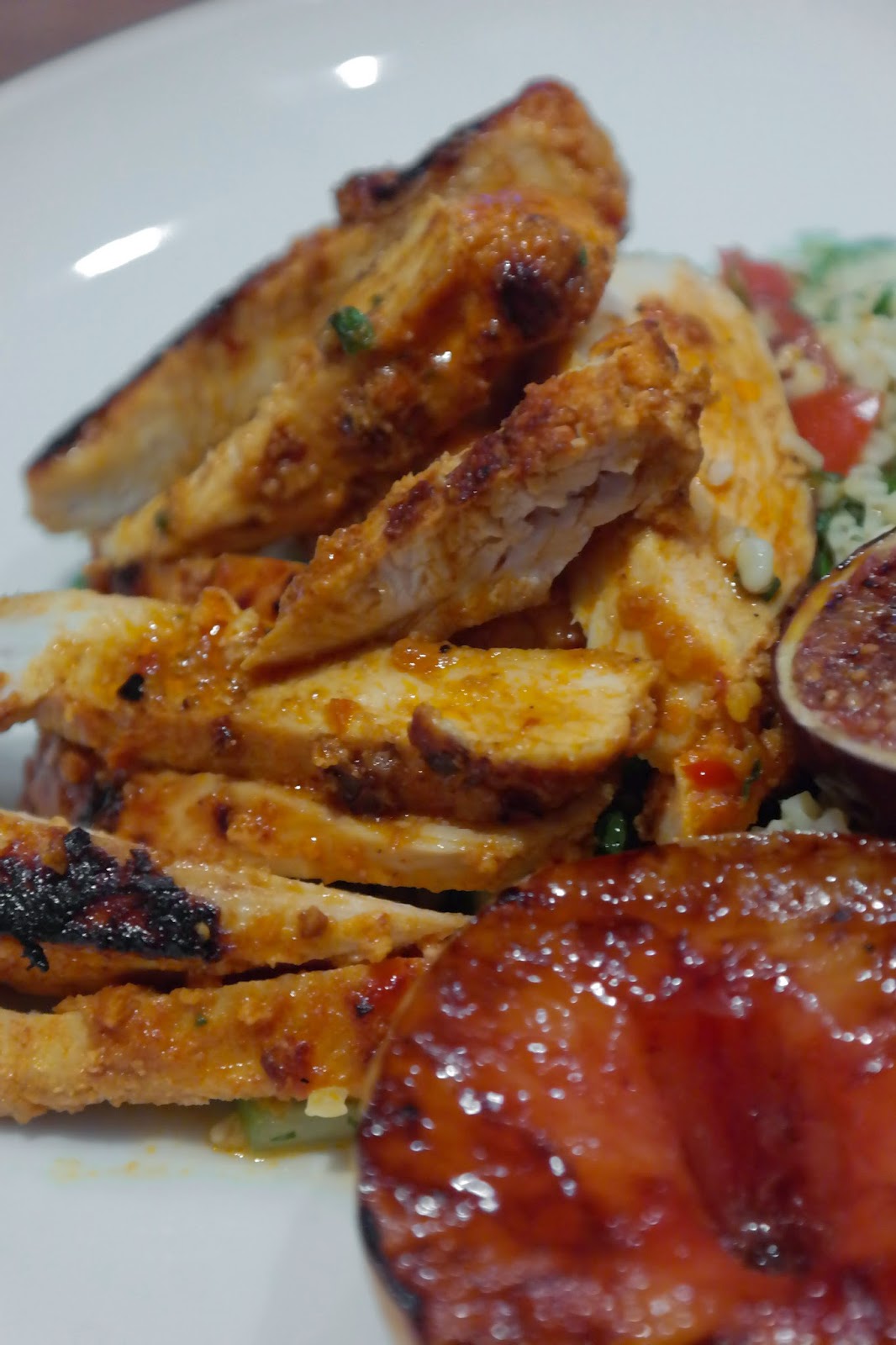