Mrs G and I have a long-standing tradition of going totally OTT for each other's birthdays.  This will include (at least a half) day off work, some kind of a light(ish) lunch, a daytime activity and will often devolve later into cocktails and a slap up steak supper.  Sadly, due to work activities, Mrs G's birthday bonanza had to somewhat curtailed last year, and we only just got round to reorganising it.  The venue of choice was Berners Tavern, a Jason Atherton joint recommended by a colleague.

Let's start with the room, shall we?  Because, I am sorry to say, these are the most disappointing pictures of the post (and I think that I have ever taken).  Because they simply do not capture the awesomeness of the space.  It's enormous – huge, high ceiling.  Every inch of the exquisitely plastered walls is filled with framed pictures.  It oozes opulence, style, luxury.  It's won awards, for heaven's sake. It is lovely. 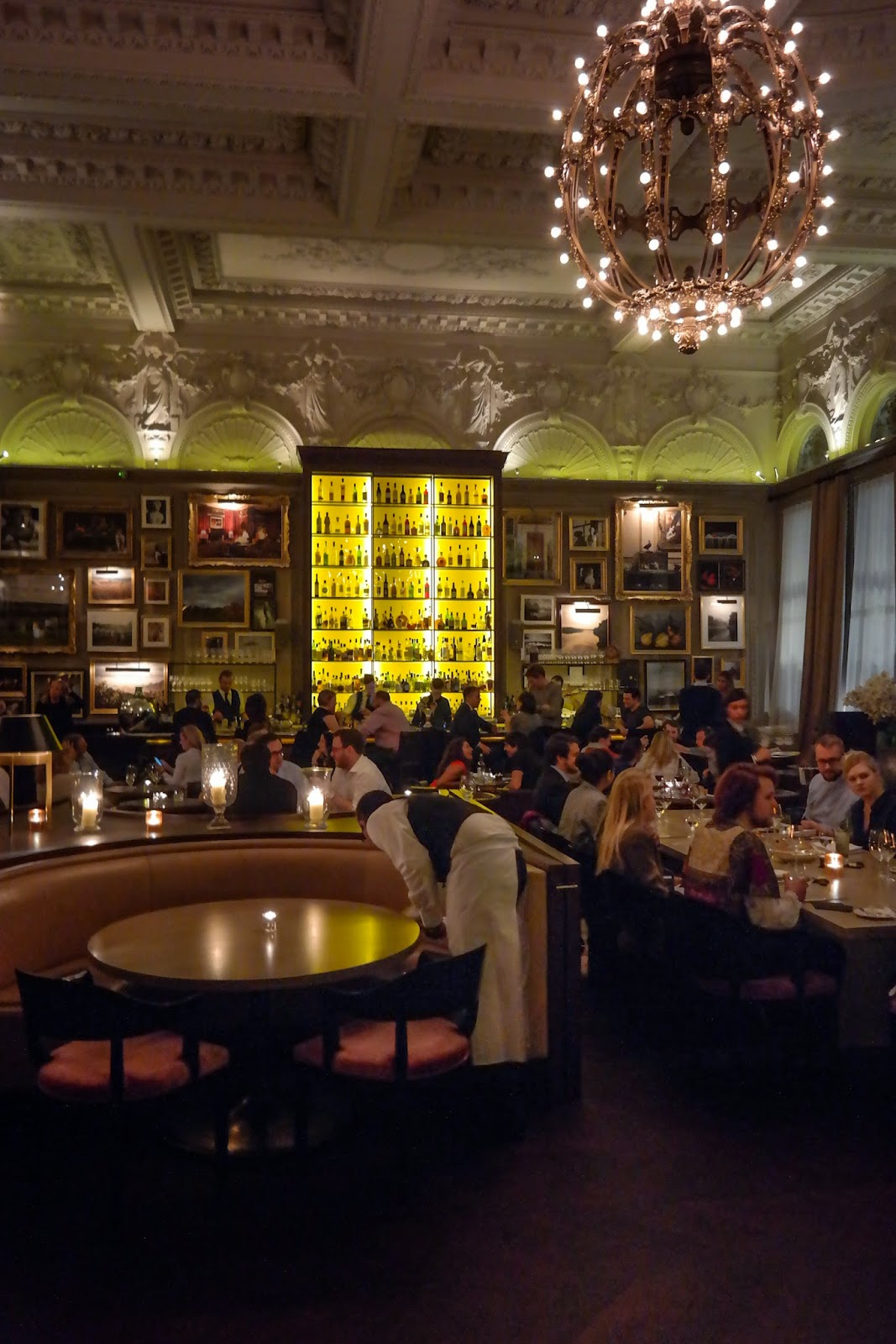 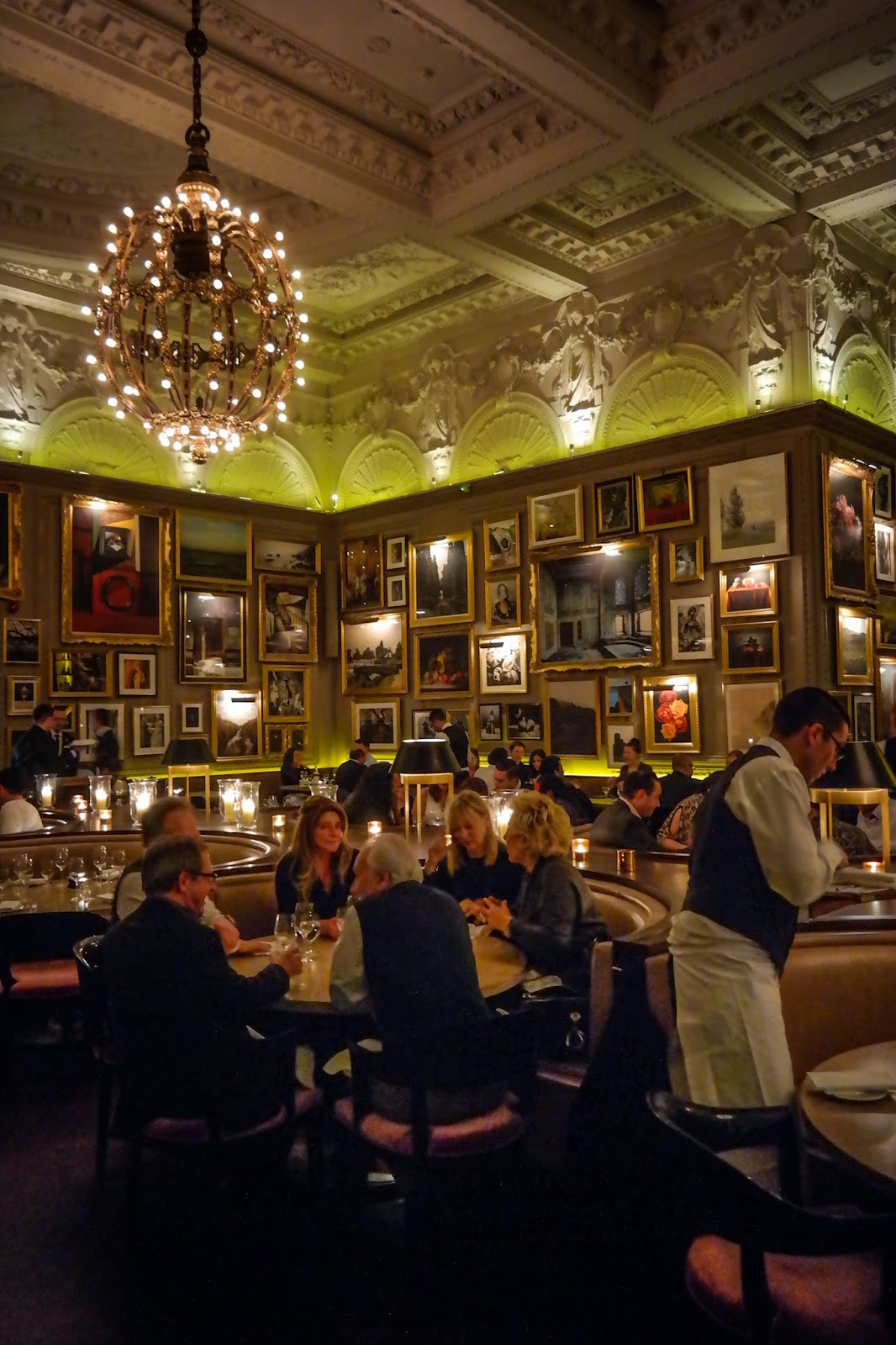 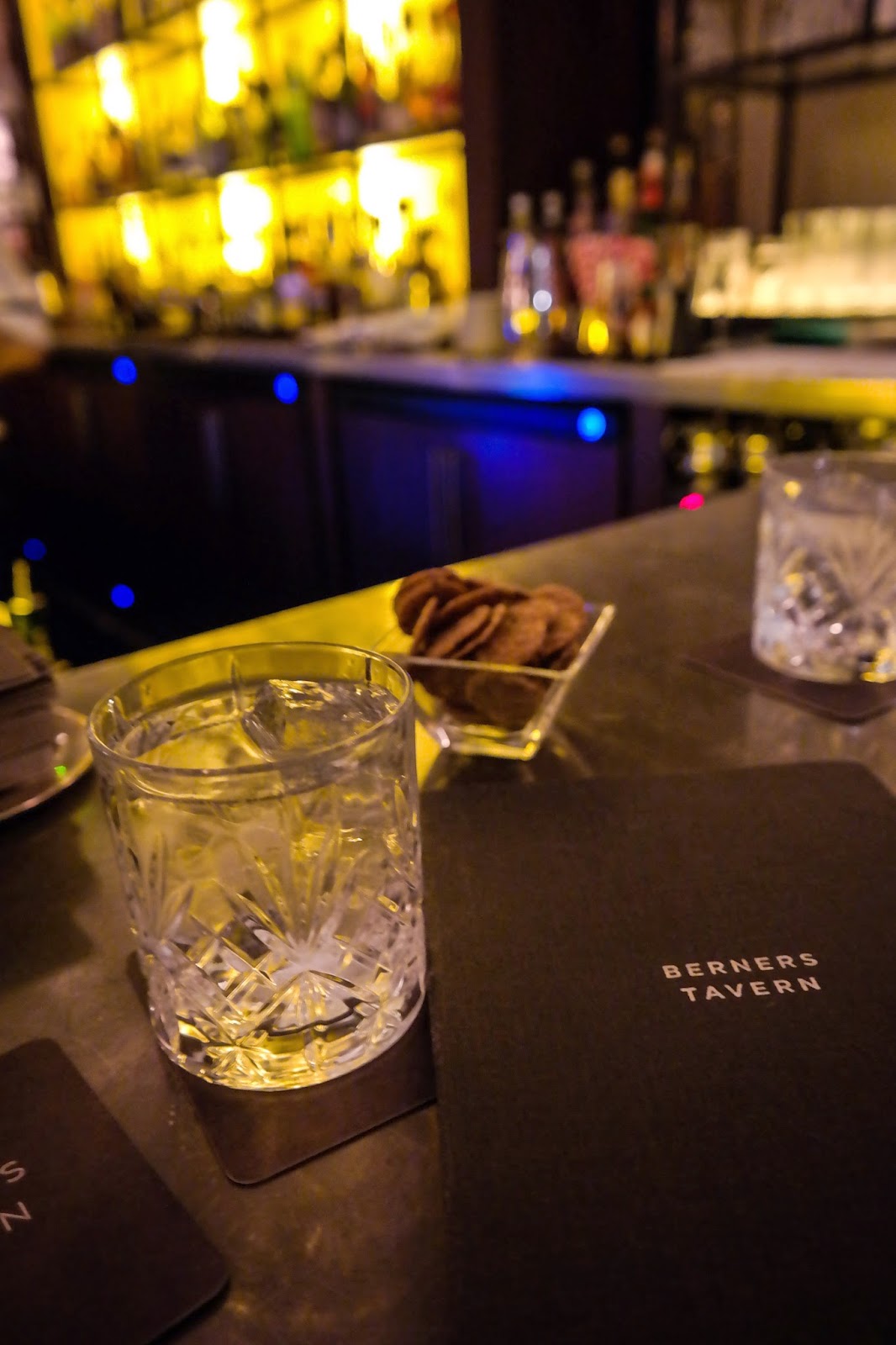 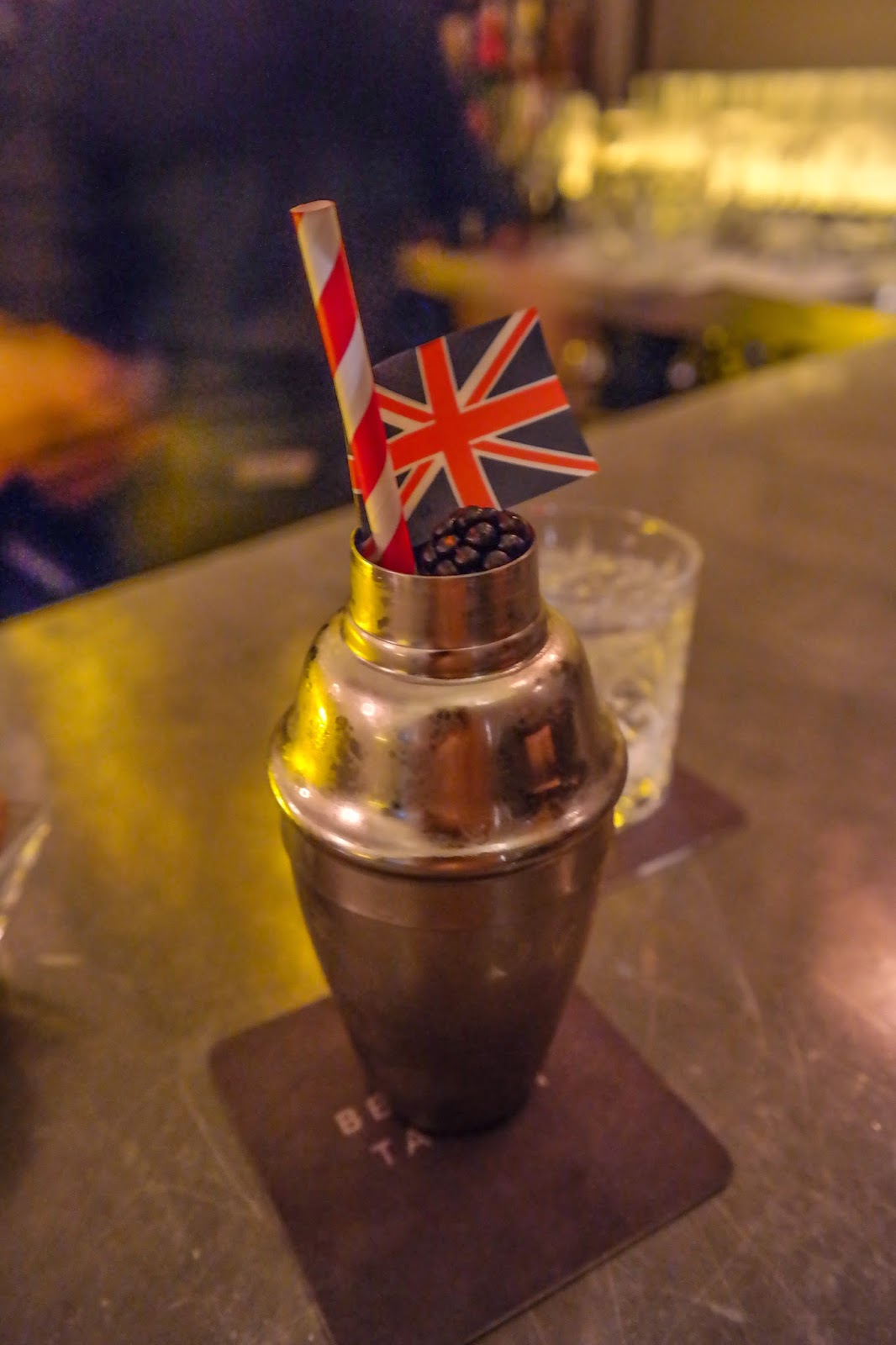 It comes in an oh-so-twee little cocktail shaker, together with the advertised Union Flag (not a 'jack', please) and is lovely.  Very refreshing.

I treated myself to a Blood & Smoke.  Having been warned that it is very smoky (OK, mix me one then) it's served up as a medley of mezcal (a smokier version of tequila), dry spiced vermouth, cherry amaro (a sort of drier, more bitter vermouth-like drink), pink grapefruit and black walnut bitters. 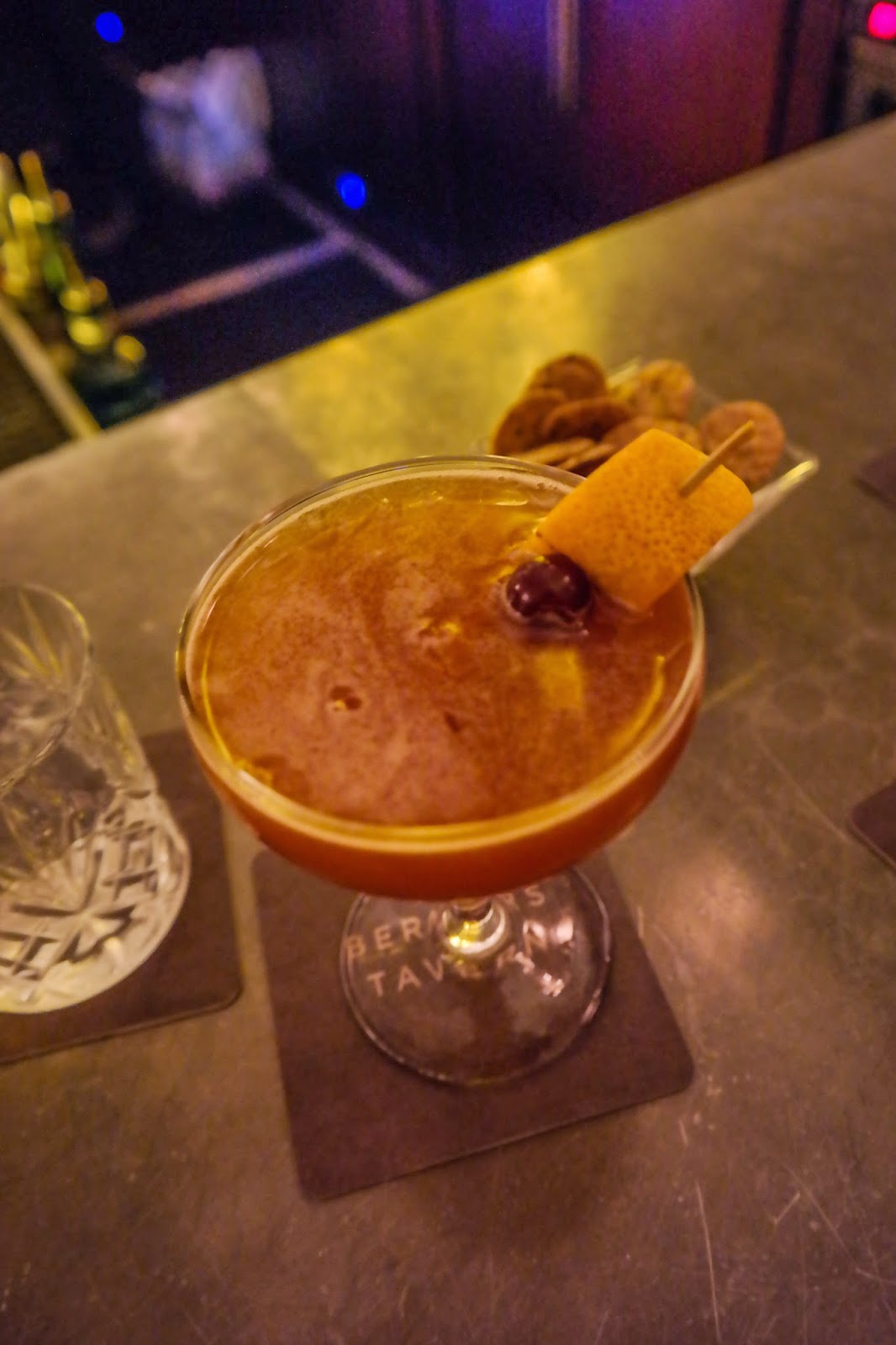 It's also lovely, although the walnut is nowhere to be found in the palate profile.  Quite dry and punchy.

Then we're off to our table for the main event.  Of course, more cocktails have to be ordered whilst we peruse the menu.  Mine = An Aging Hipster.  Bourbon, run, spiced vermouth, maraschino and bitters.  It's been aged in a barrel too.  And comes in a hipflask.  Trendy. 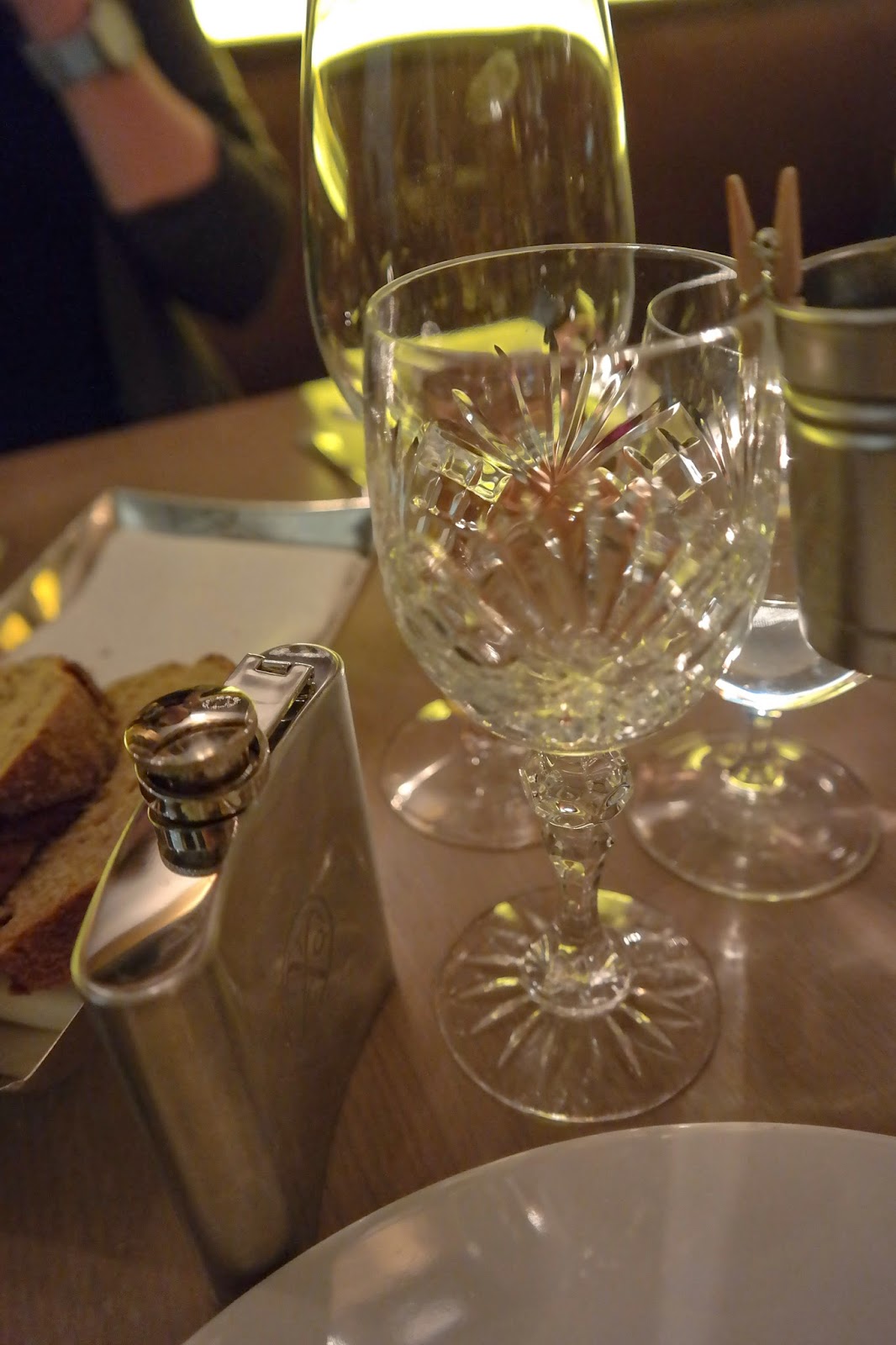 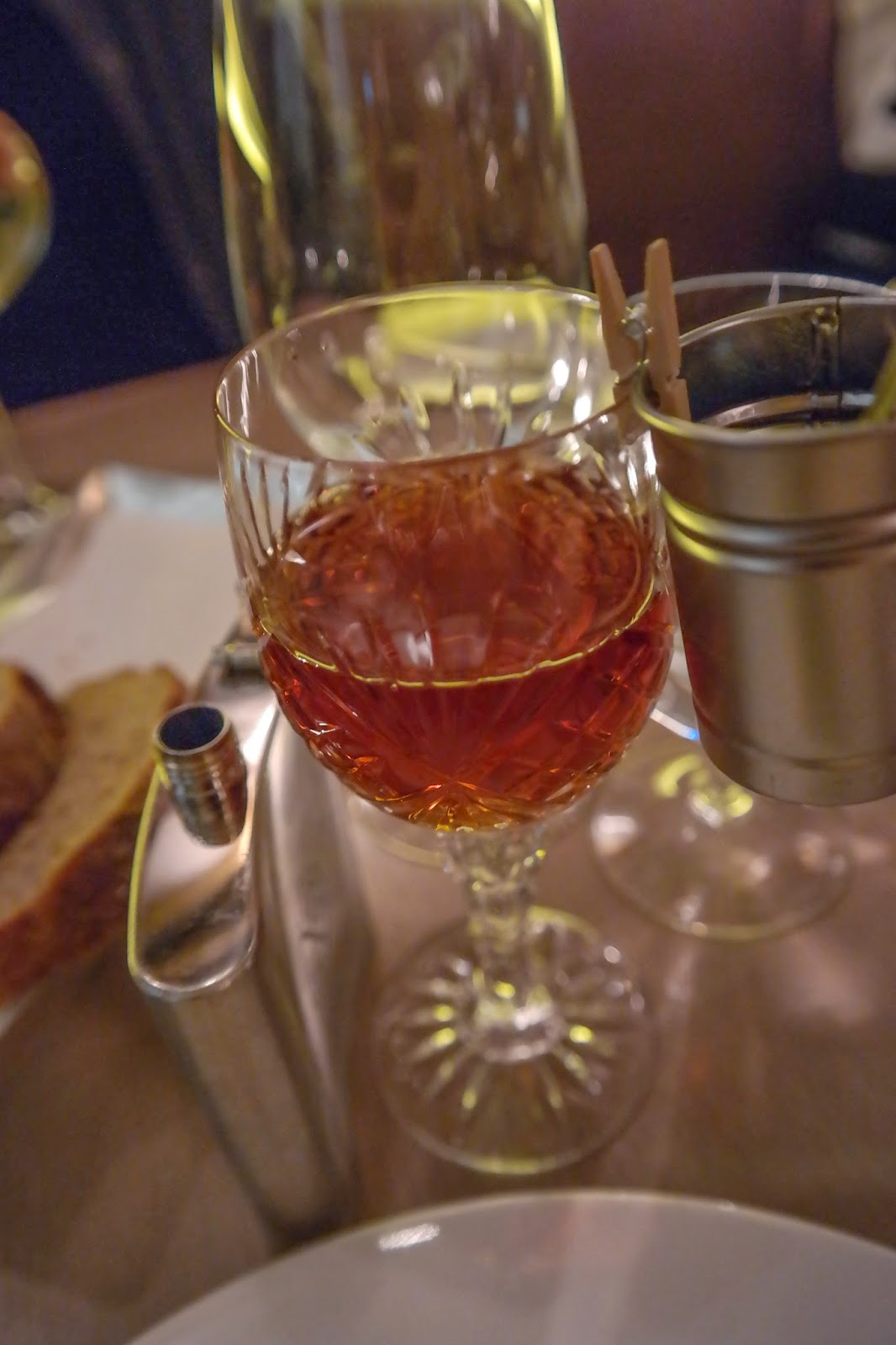 It's complex, definitely, as one would expect from the barrel aging.  It's perhaps more of an after dinner drink, as it's not very cold and it's one to be sipped gently.  The rum is nicely apparent, without choking out the bourbon. 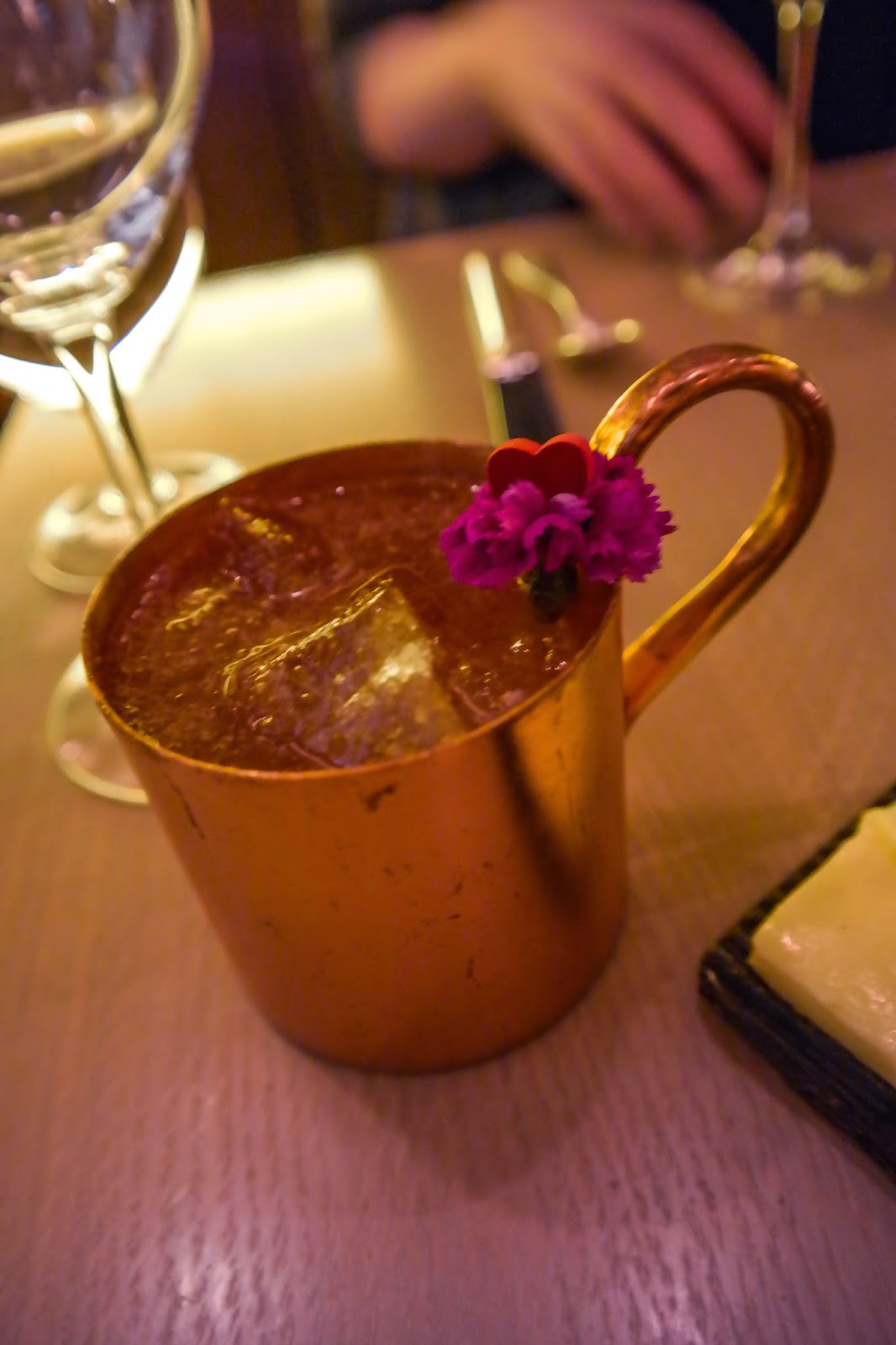 It's similarly lovely, and well presented, which is always a nice touch.  Like a margarita with an added layer of interest in there too.  Good work. 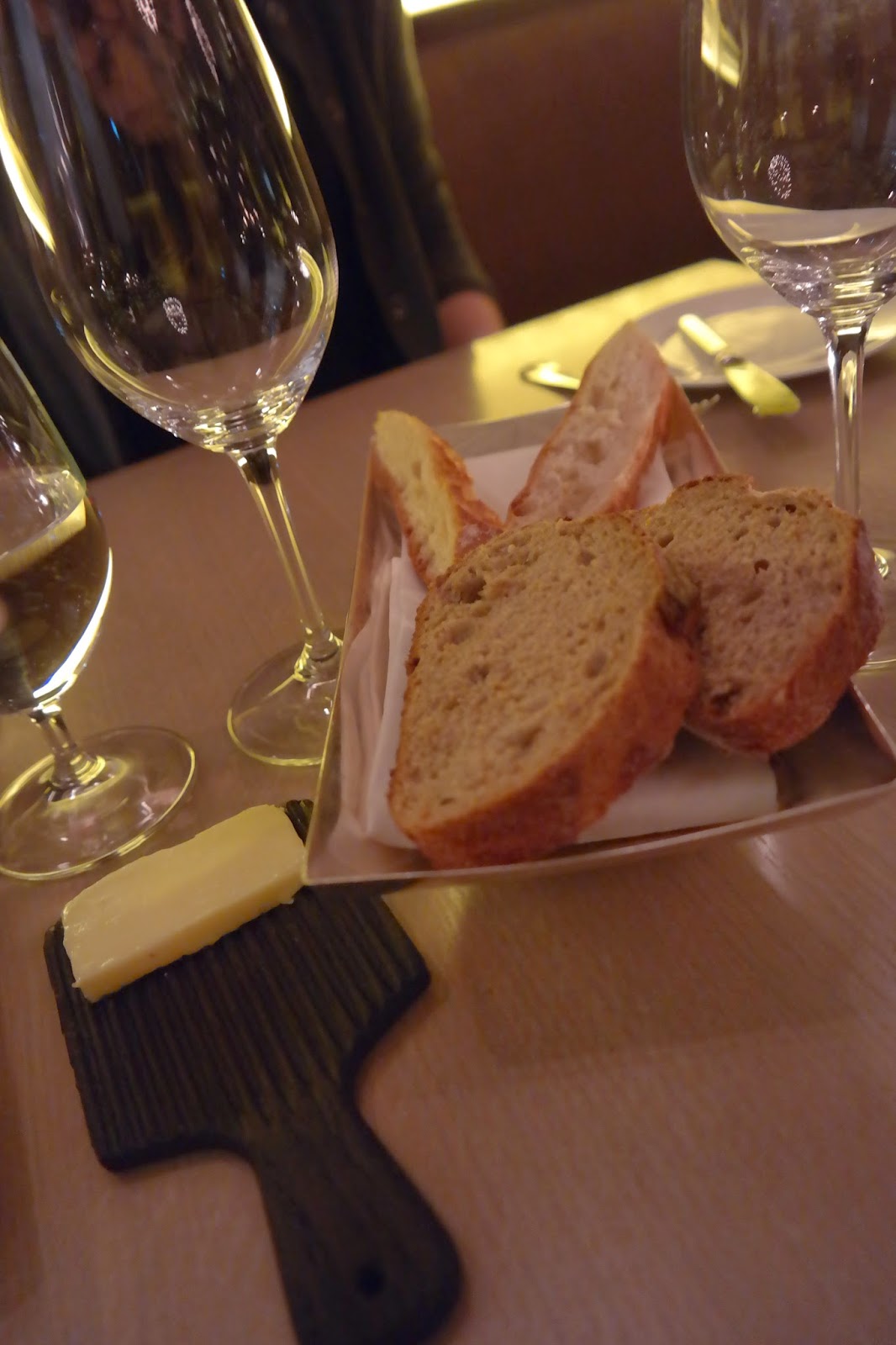 For starters we shared two dishes, the crispy pigs head and the lobster and prawn cocktail. 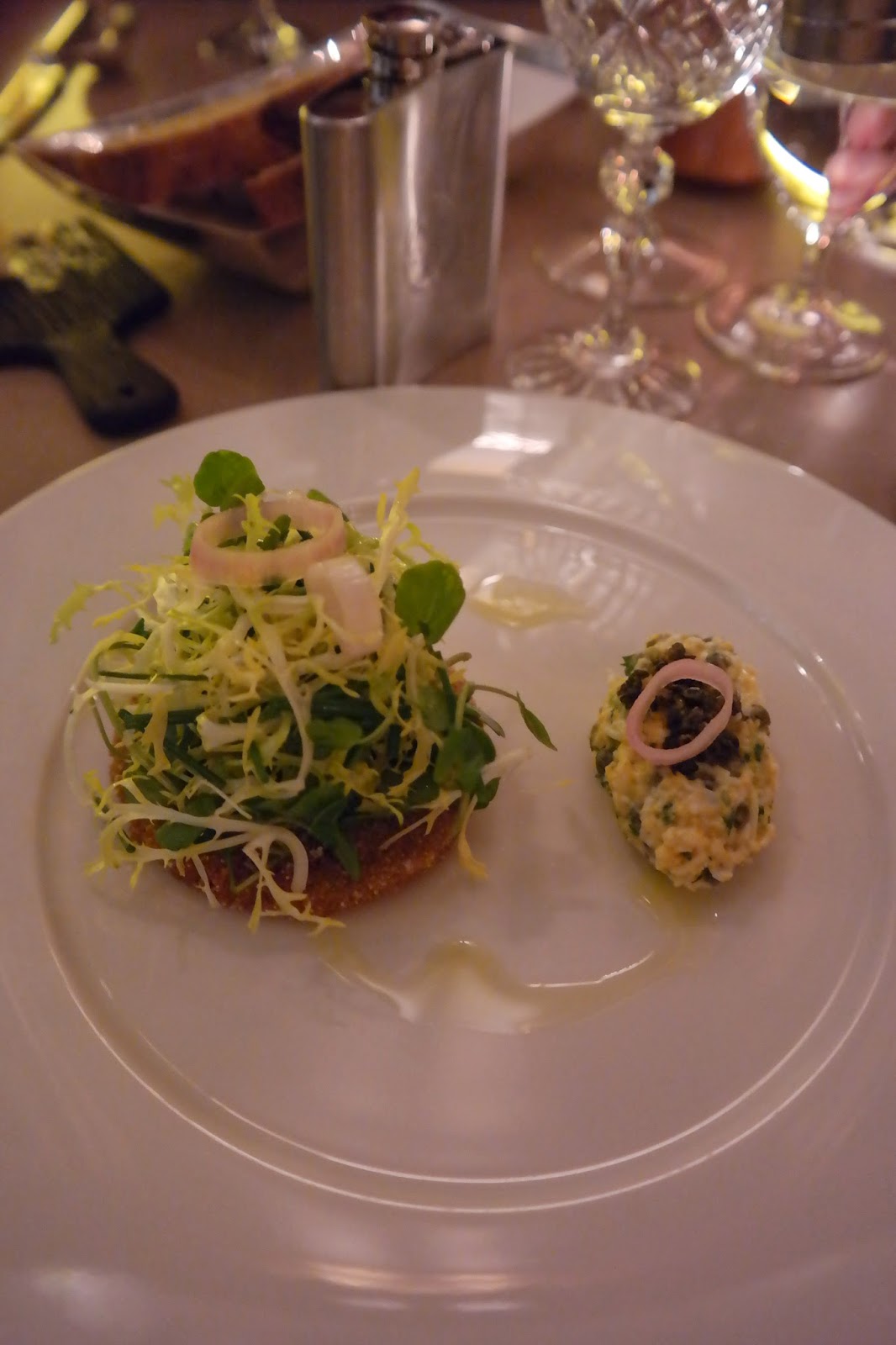 The pig's head was a bit disappointing.  It was sold as contailing black pudding and foie gras, but I regret that I couldn’t taste either – odd, given the strength of their relative flavours.  But it was nevertheless nice, and the sauce gribiche well put together – it's just that I'm looking for something a bit more impressive than 'nice' right now, given the venue (and the price).

The prawn and lobster cocktail was wonderful.  The sauce was, unlike so many other 'cocktail' starters, light enough not to kill off the taste of the shellfish, whilst still heavy enough to taste.  Only gripe is this: why include the prawns at all?  It can’t be just cost – Hawksmoor used to do a very fine equivalent that was 100% lobster and no more expensive.  All that mixing the two does is to serve as a timely reminder of the ways in which lobster is infinitely superior to prawn. 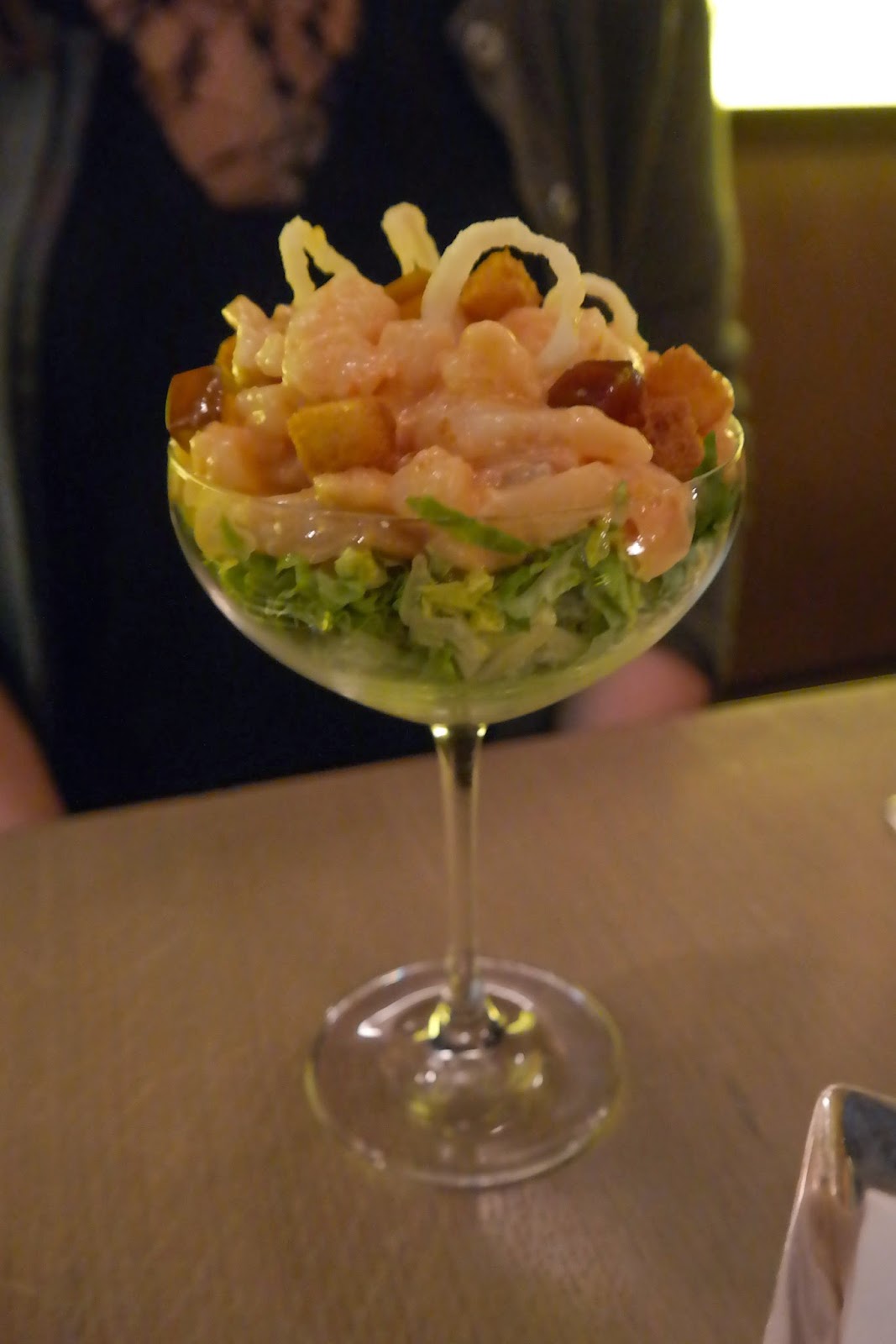 For the main course we shared the chateaubriand. 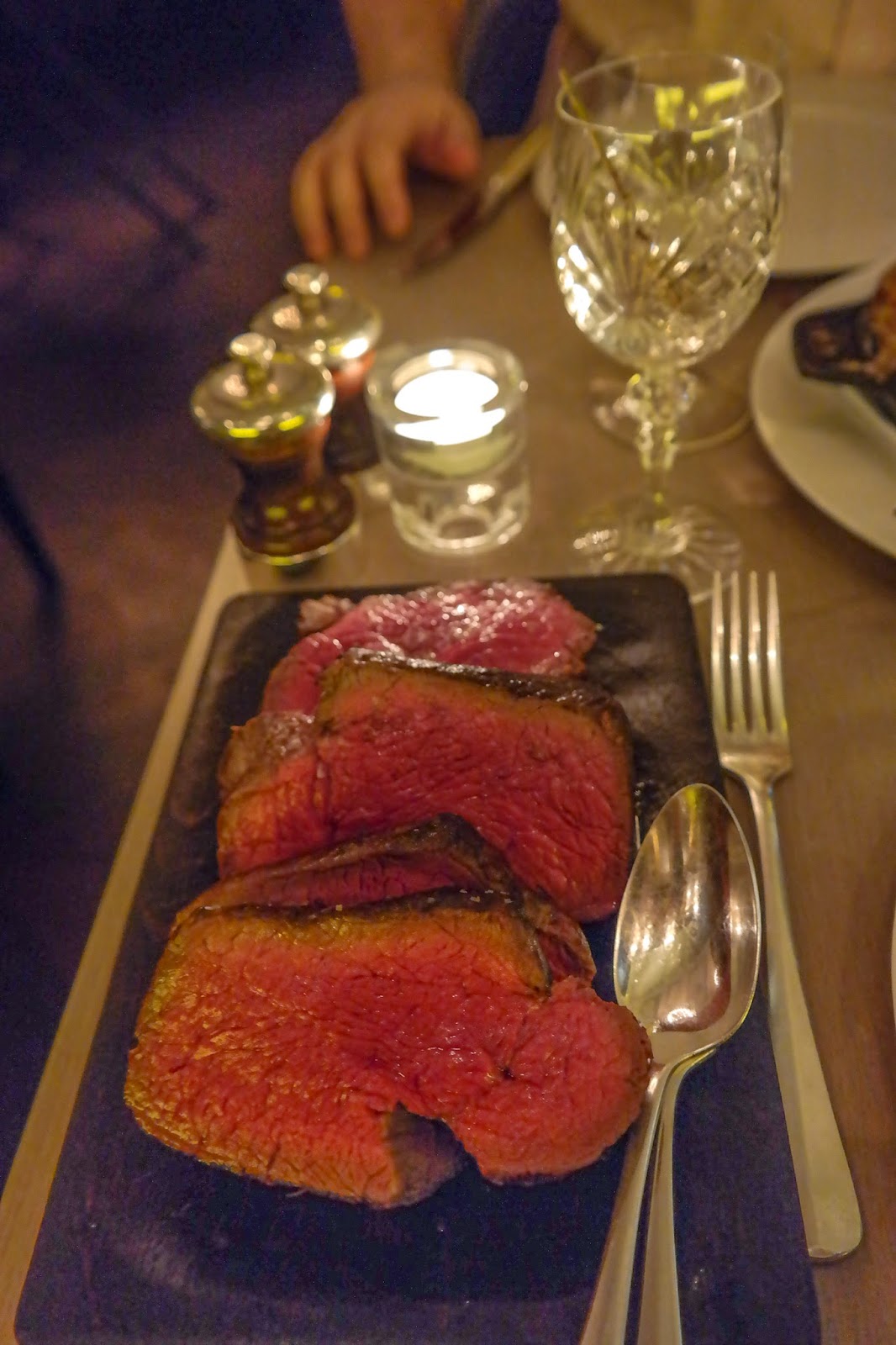 Apparently, this is for two.  I would say it could work for four, honestly.  It is ridiculous (in a thoroughly good way, for the avoidance of doubt). 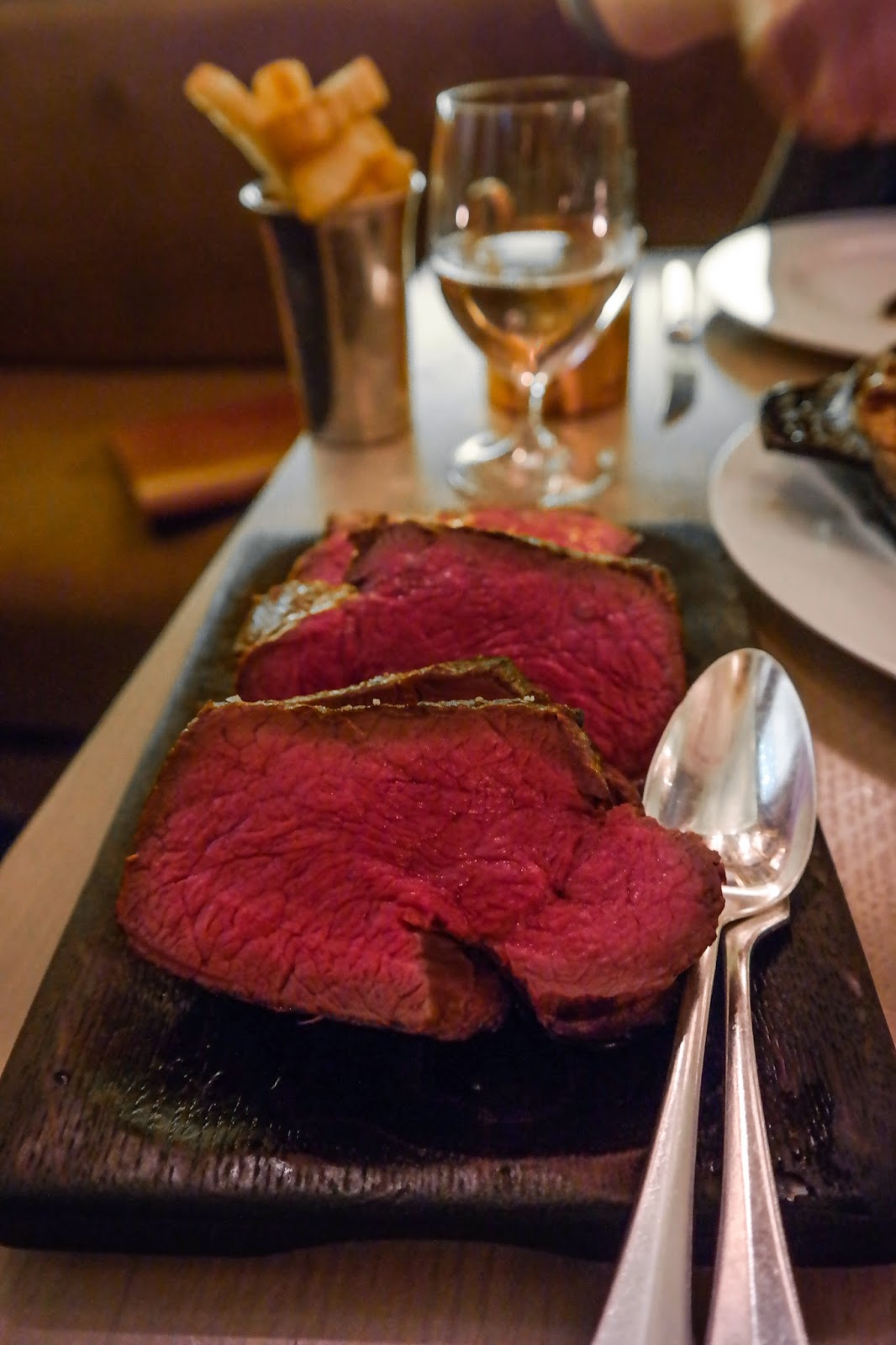 First up, the cut of meat is huge.  And it's beautiful.  It's lake district cattle, so well grass-fed.  It’s been grilled perfectly – a touch of charring around the edges, cooked all the way through yet still perfectly pink, moist and juicy inside.  A triumph.

Then there's the side dish.  This is the killer.  It's a mac & cheese with ox cheek and truffles.  I mean, can you imagine anything richer, more OTT than that?  Nope. 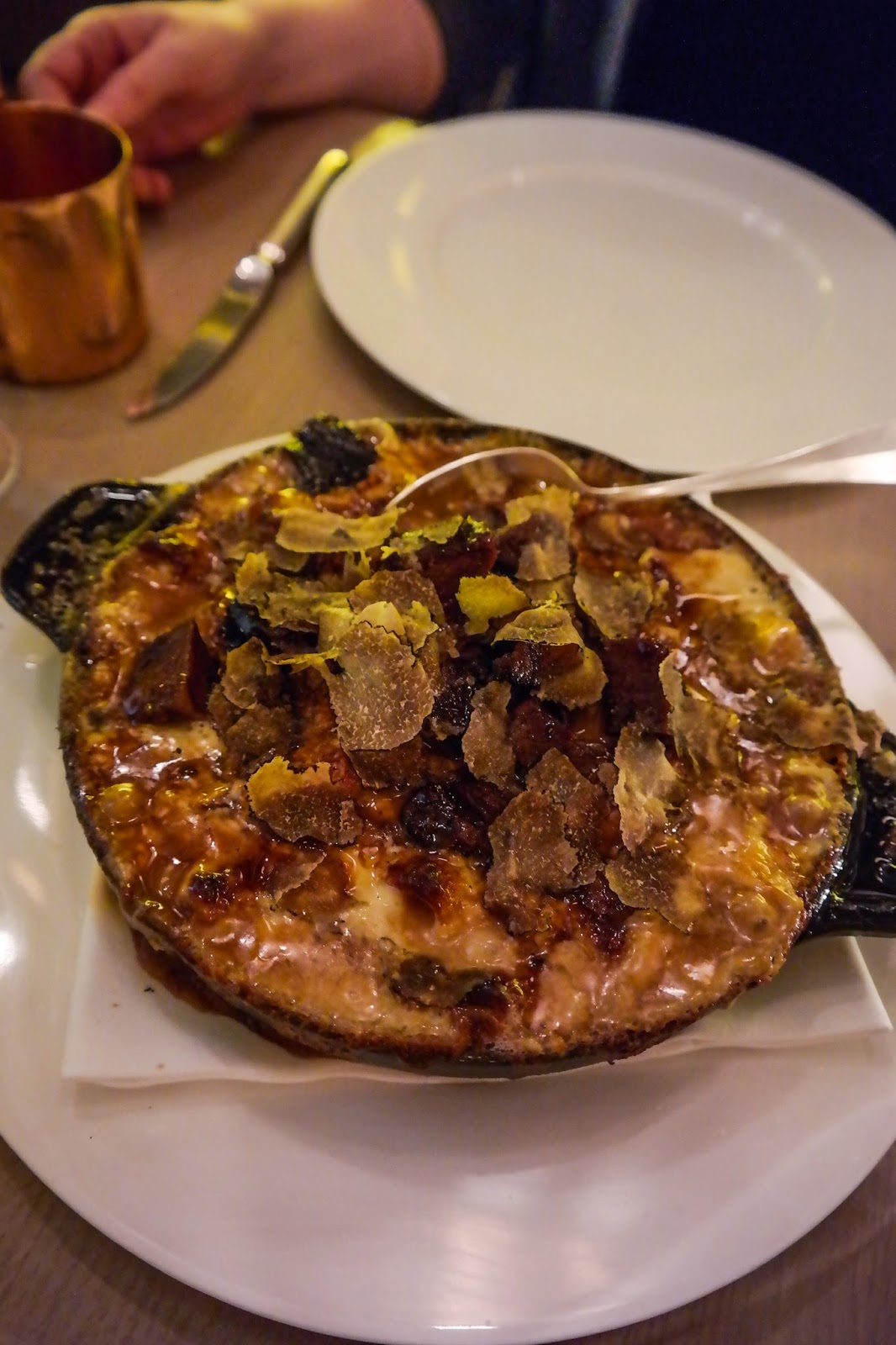 It's also mind-blowingly good.  I want to eat it all – and I try to.  It comes to the table so hot it's still bubbling and spewing melted cheese delight.  The cheese is stinkingly rich and strong, the macaroni is actually paccheri - a kind of short rigatoni pasta, so bigger and more sumptuous than your usual macaroni - and somehow still just al dente.  The truffles are not too strong (thankfully) and are just there enough to excite.  It's crispy on the top AND the bottom, thanks to the cast iron dish.  It's amazing.

We also got chips. 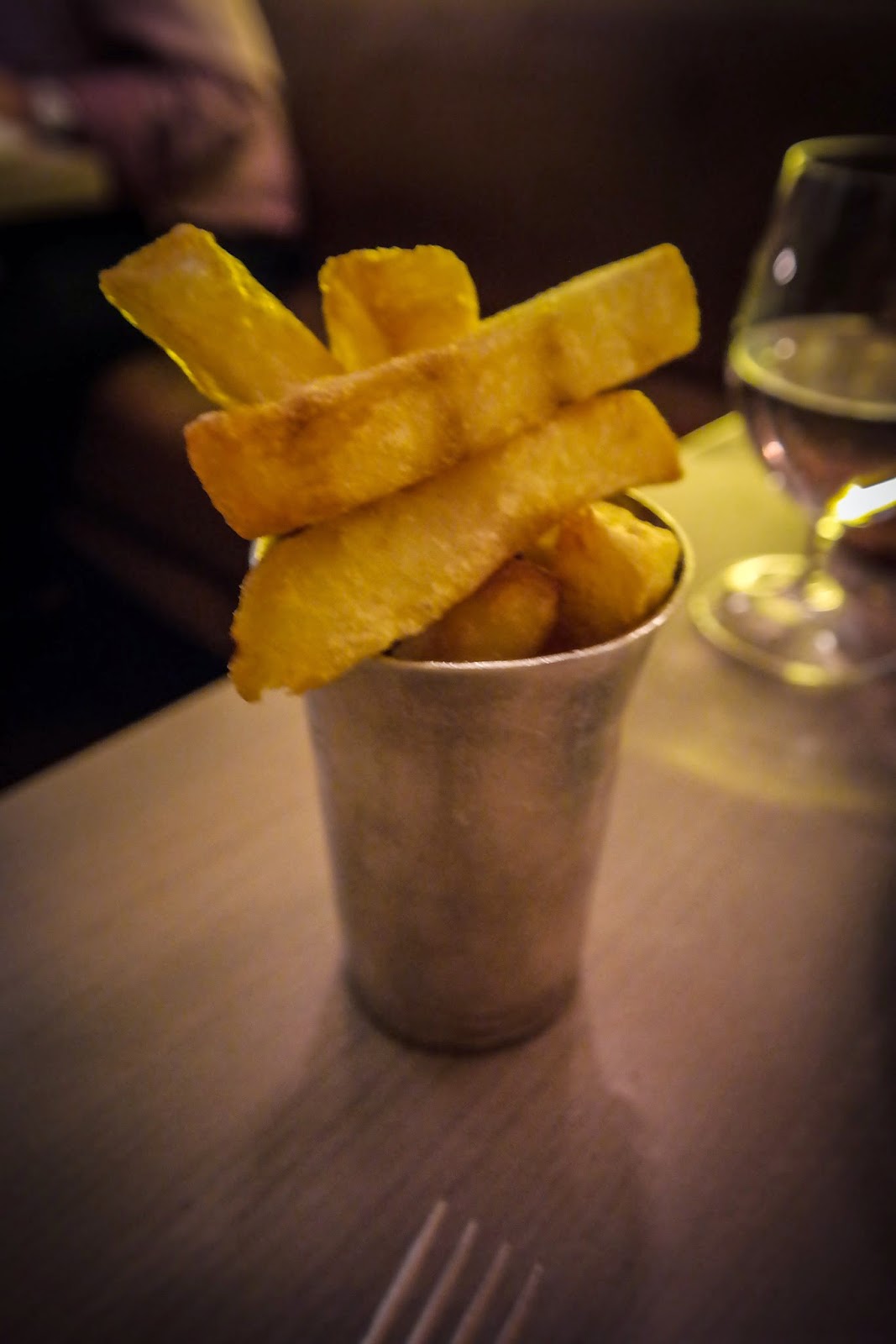 Do not get chips – they were great but so, so unnecessary what with the mac & cheese.  Most of them went back untouched.  If you insist on another side, for the love of God go for something green.

We washed the beef down with a glass each of the house's standard malbec (Tinto Negro, from Mendoza Argentina, in case you're wondering) which was very, very delicious. 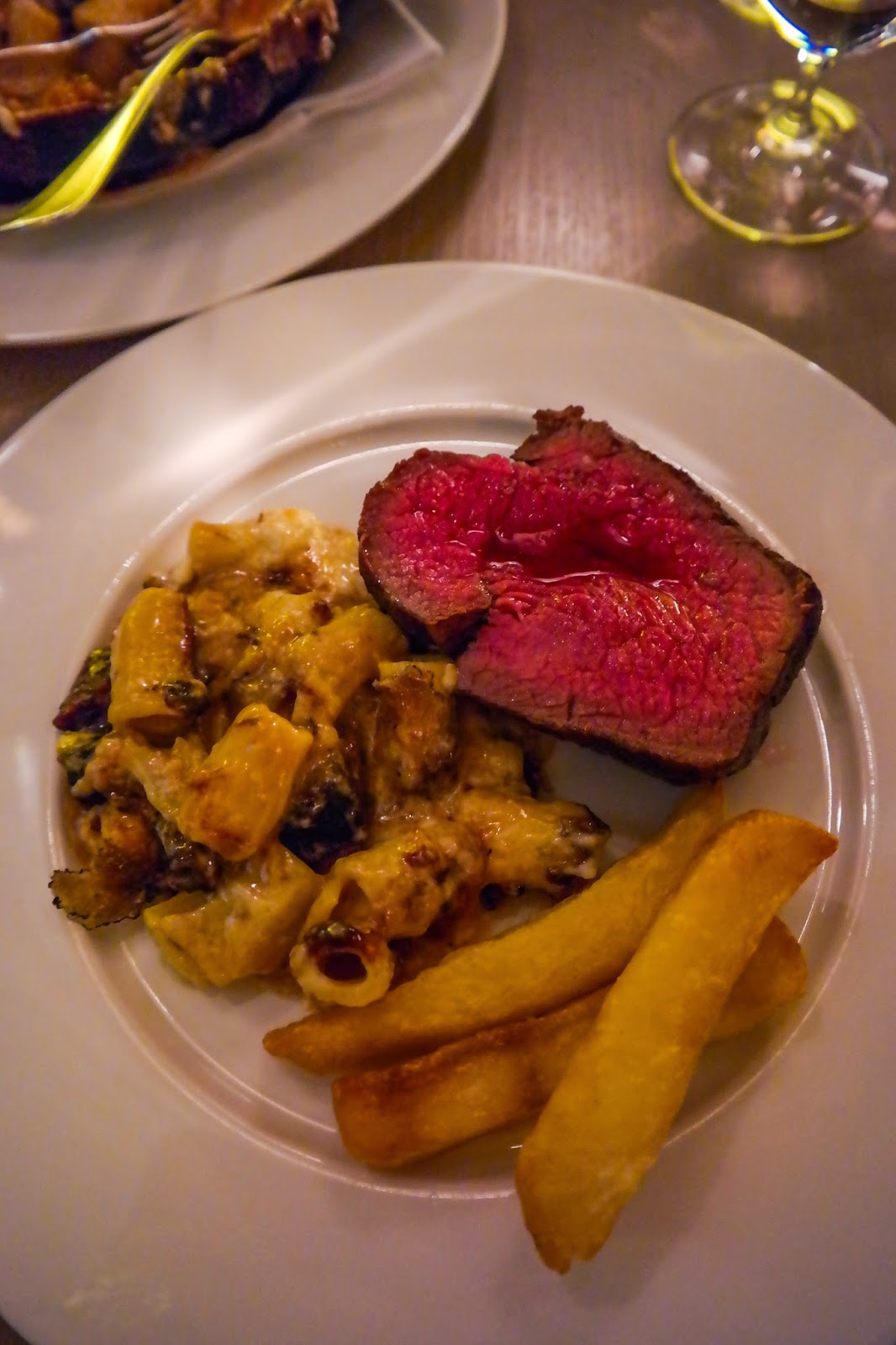 Then on to pudding.  Rhubarb trifle with meringue topping and lemon thyme ice cream. 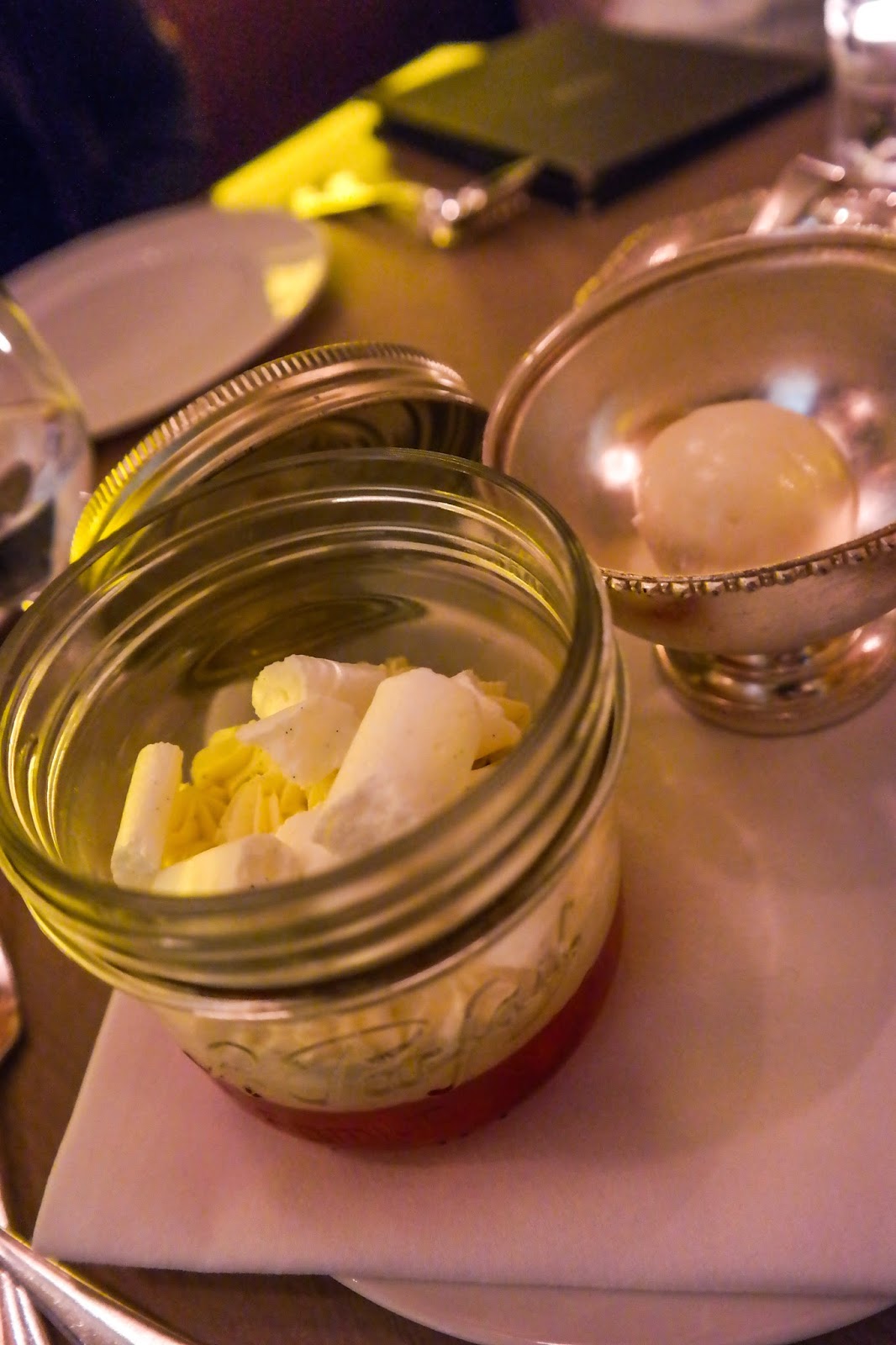 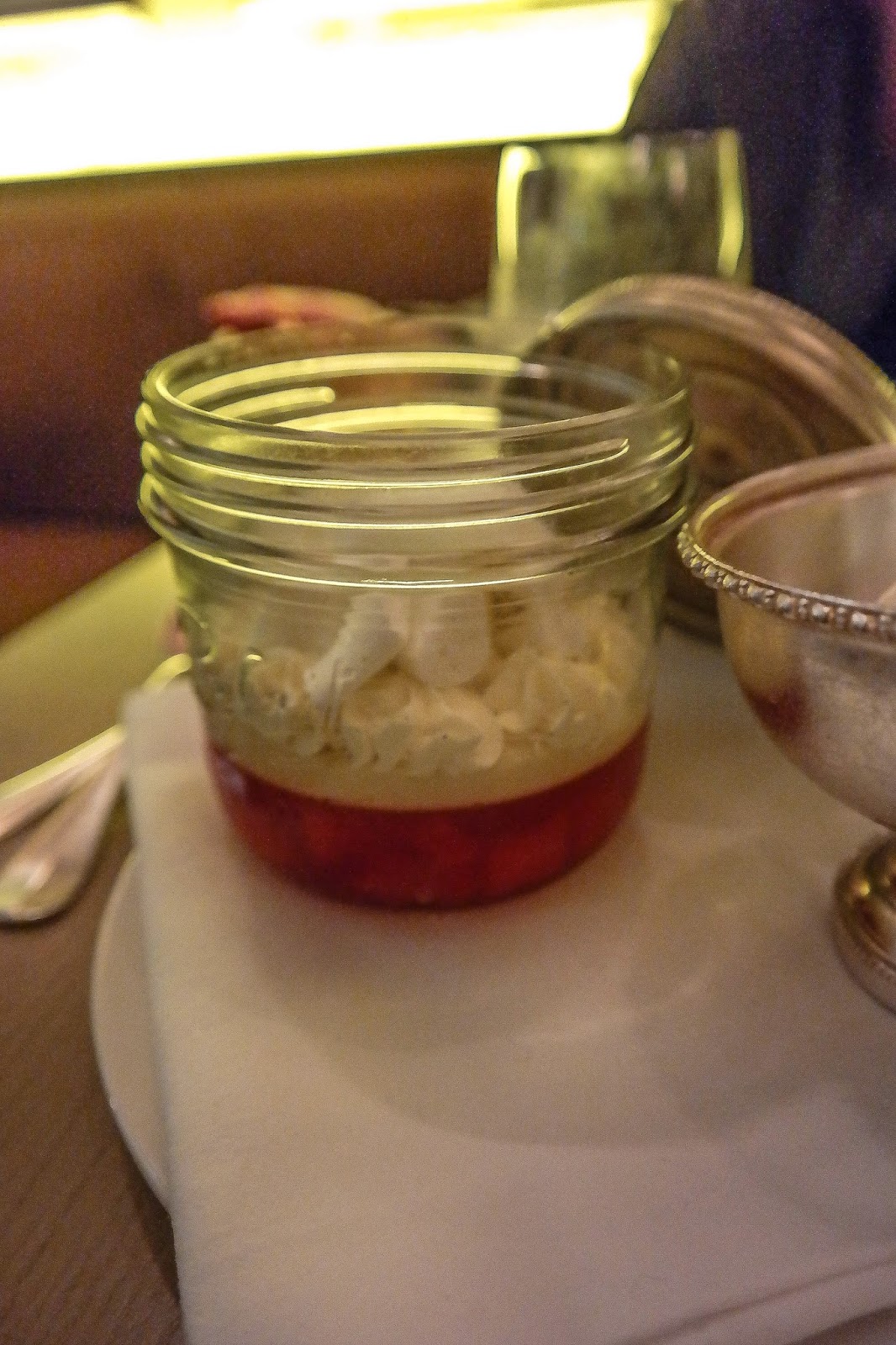 Frankly, we didn’t really need this after all the cow and carbs we'd just scoffed.  But I'm glad we did, because it was very lovely – even GrubsterGirl agreed, and she's not normally one for trifles.  We shared it (Lord knows, it would have been way too much for one person to eat alone).

Berners Tavern is an absolute treat.  It has to stay that way, sadly – a treat only.  I dread to think how bad all that red meat and cheese and carbs is, or indeed the cocktails and the wine, for the body.  But it's also ruinously expensive.  And if I add just one more grumble it's that one feels a bit rushed, as if there's a desire to get the table back and turned around ASAP – for example, our drinks for menu browsing arrived with the starters, so quick was the food to come out of the kitchen.  I know that Jason Atherton is a big name, and that the restaurant is super popular, but still.  It was a shame and, at the price, not really on.

But that aside, it was fantastic.  We loved it, we really did.  A real temple to proper, British food done well and done modern.  Huzzah.