Stag Part 3: The Boisdale of Belgravia

As is the way with most stag do's, it was all meant to be a big surprise.  And by and large it was.  However, inevitably, but the end of the day I knew where we were having supper, given that a few of the chaps had rather indiscreetly (read 'dumbly') given the game away – you know, comments like "well, after that lunch I'm not sure I'll be able to fit anything in at Boisdales!" (Ben M) or "Have you been to Boisdales before?" (Toby).  Nothing too obvious. 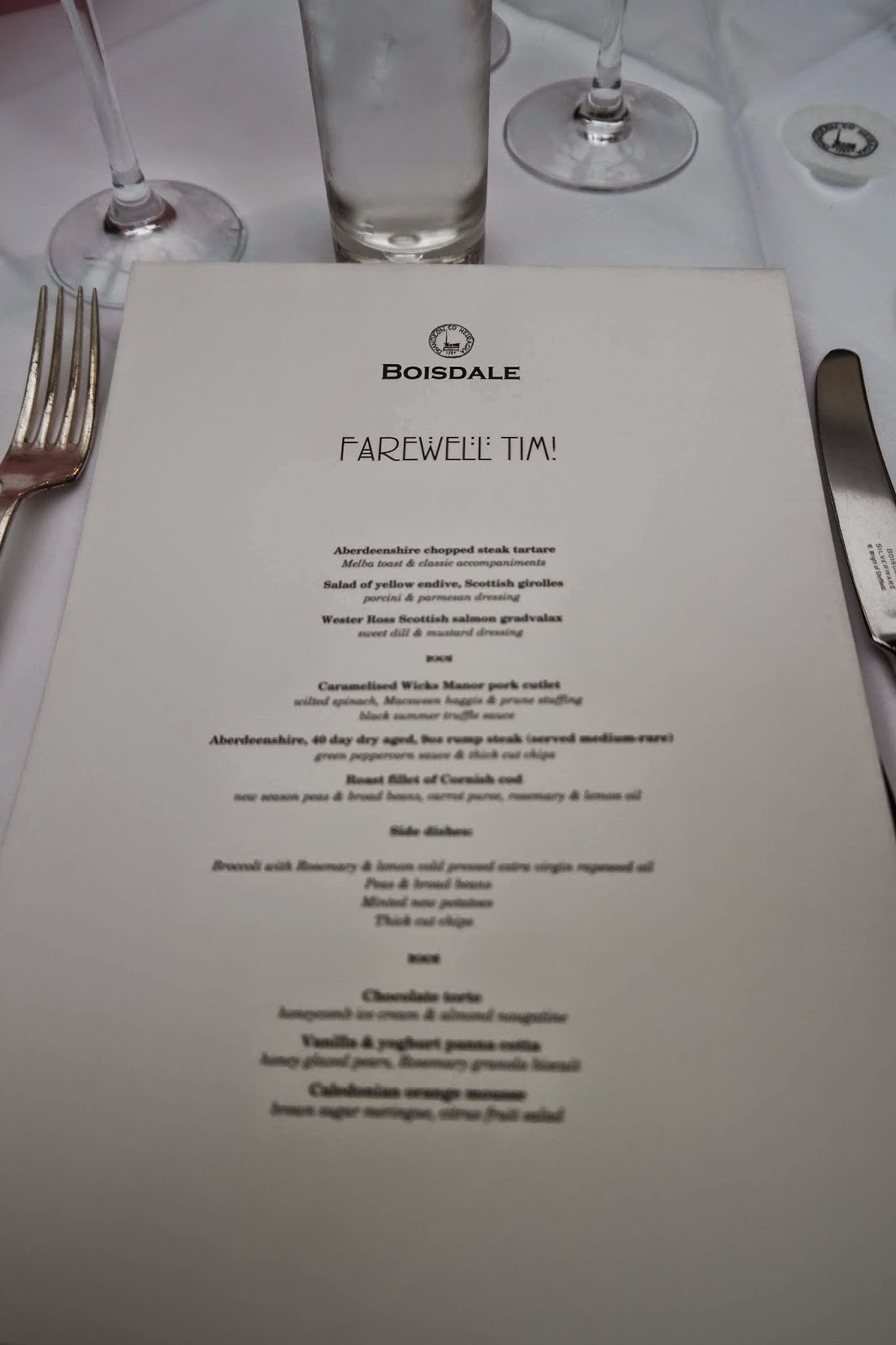 Actually, I jest.  The game wasn't given away at all – not because I didn’t hear them, or chose to put it of my mind, but instead because I simply had never heard of Boisdale.

It's a fantastic place.  What Greg the Best Man had been looking for was a private dining room able to seat the whole gang, serving proper red wine and even redder meat and with a terrace to enjoy a post-supper cigar.  Boisdale of Belgravia ticked each and every box.  It's fantastically old school – silverware, waistcoated waiters, jazz in the later evenings, the whole shebang.  It was perfect. 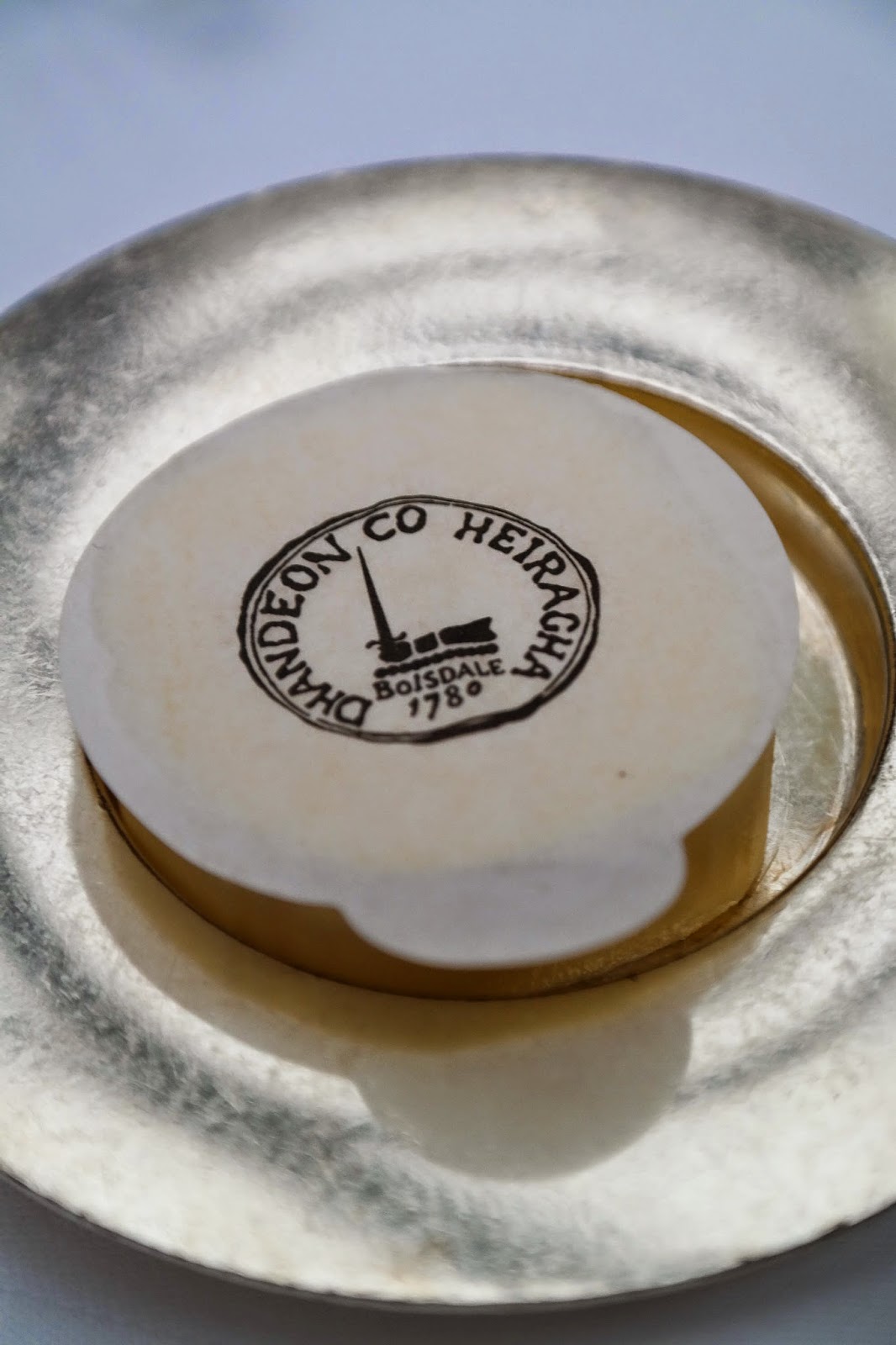 Given several different menu options, the best men and I opted to go for the only really fitting dishes for a stag do: steak followed by steak (tartare and rump, that is).


The tartare came as one would expect it to, served up with the classic melba toasts and the even more classic accompaniment of accoutrements.  I doused mine in Worcestershire sauce and green Tabasco. 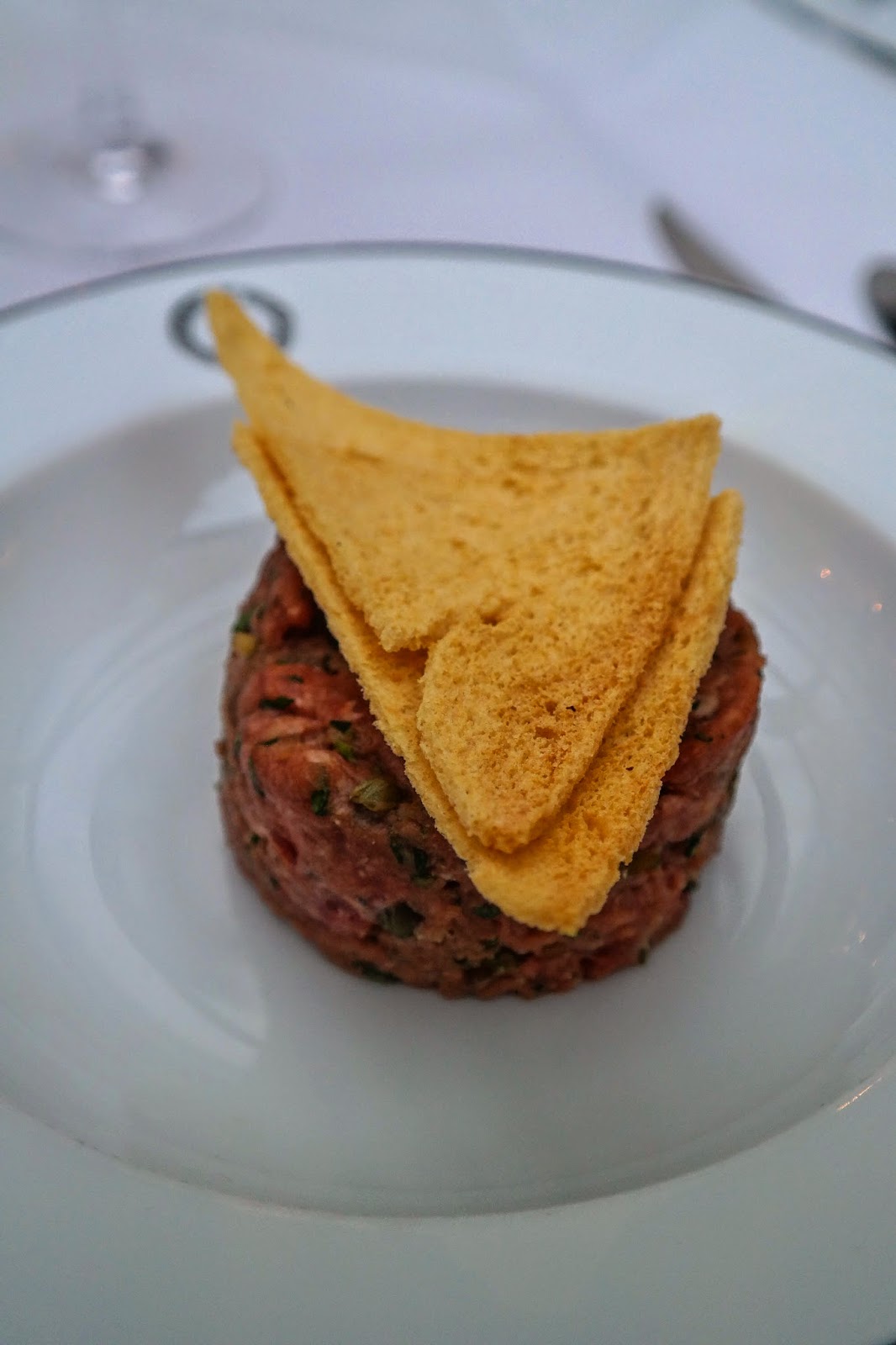 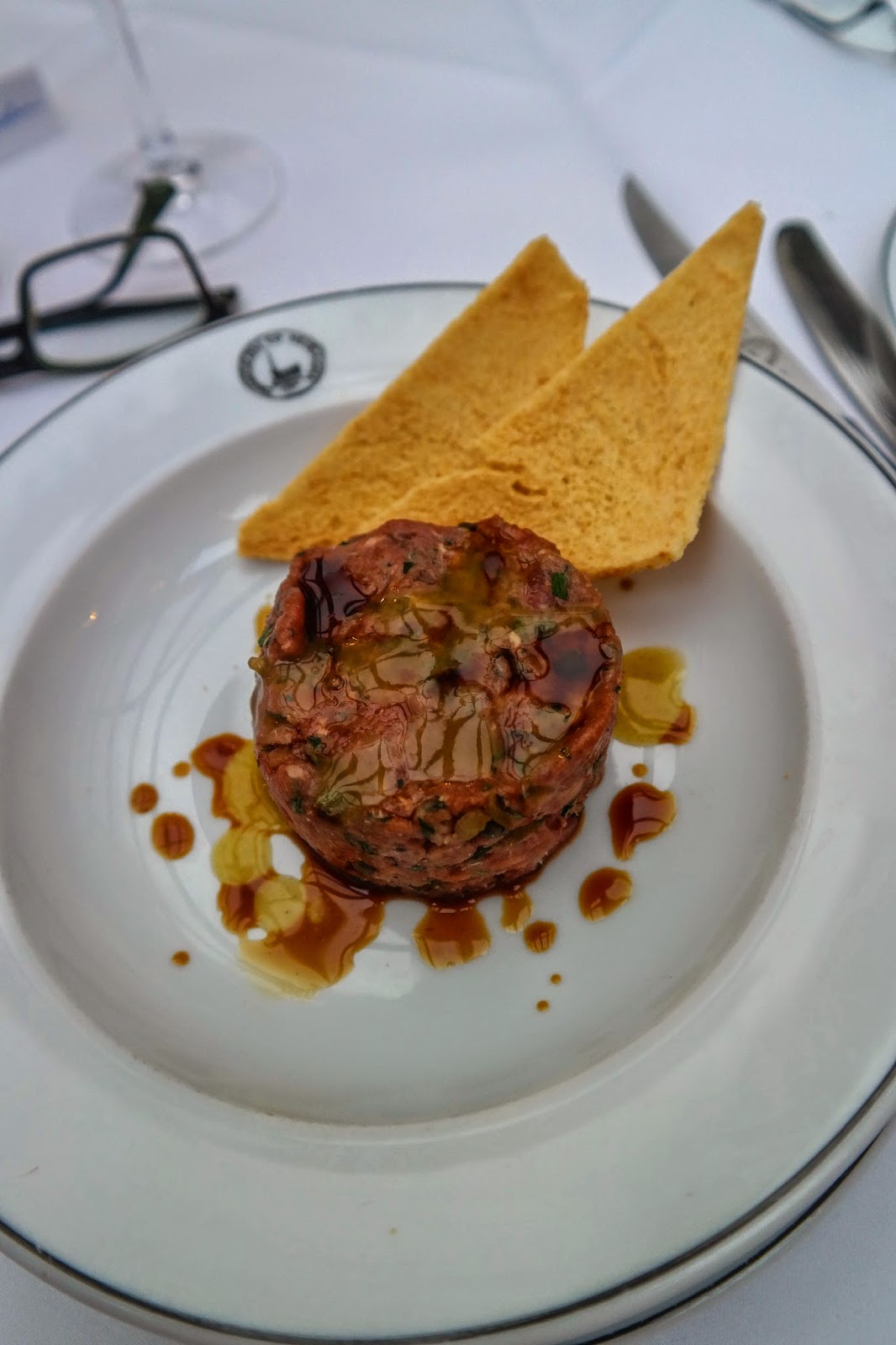 But I gather there were other options available, if you can’t handle your red meat.  Some even went for a (very good looking) salad of endives and girolles with parmesan and porcini dressing. 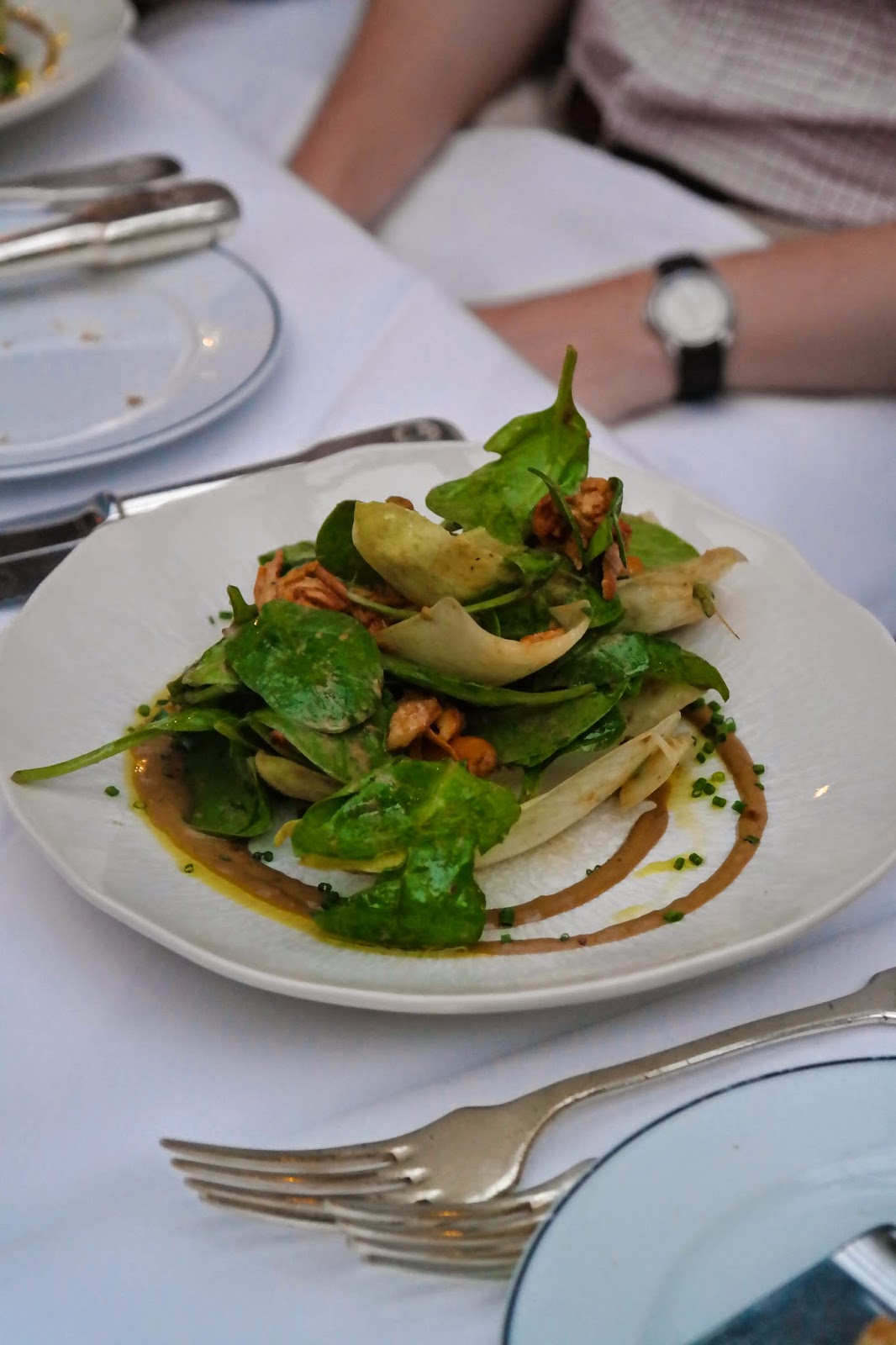 Others tried the gravlax, which was served up in an epic, plate covering portion, and which was nicely kept company with a classic dill sauce.  Keeping it old school. 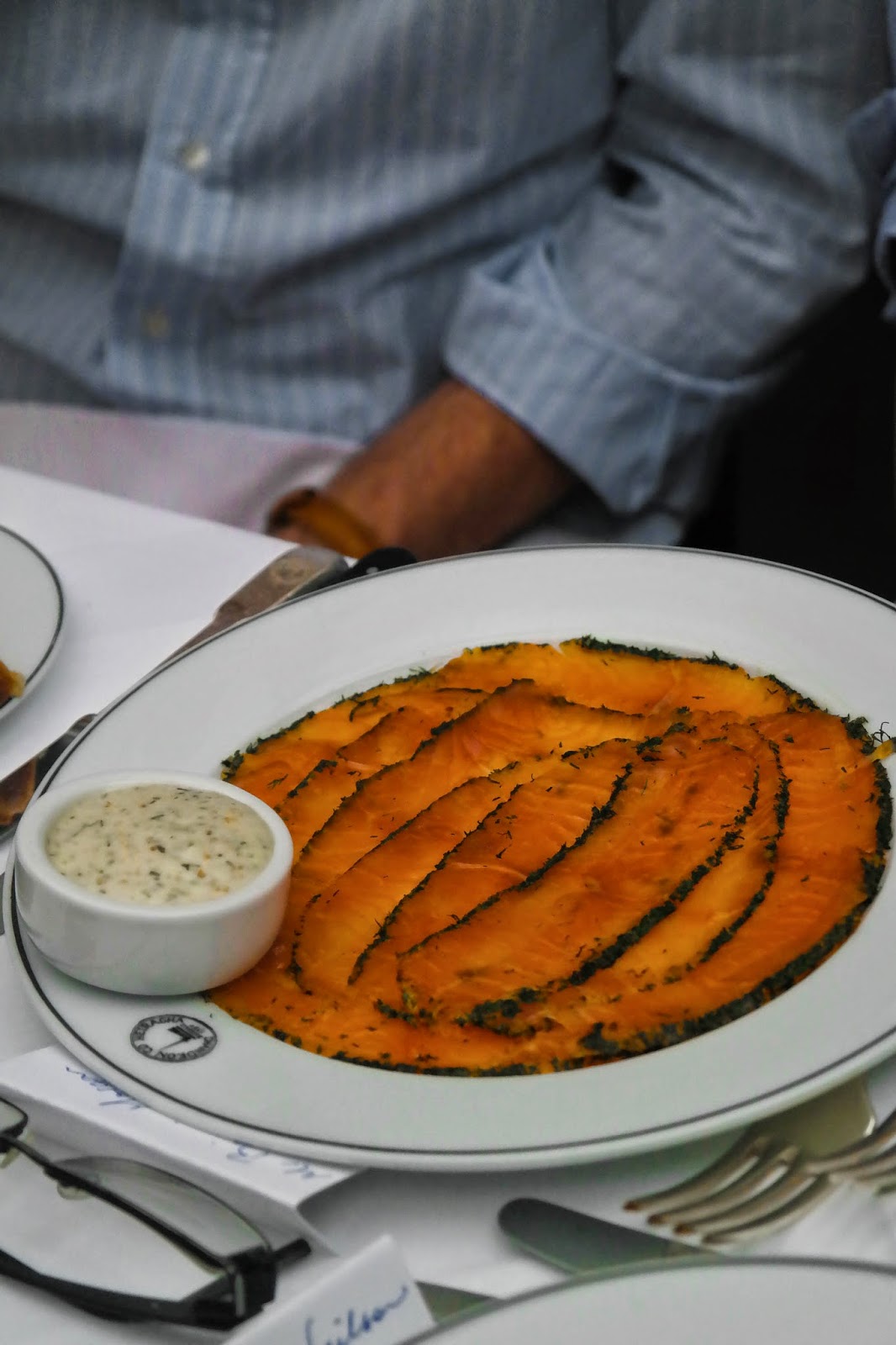 A couple of boys went for the pork cutlet, which I gather was very good.  It was served up with something described as Moroccan haggis and prune stuffing (Boisdale, by the way, has a seriously Scottish bent – all the better given its chef's predilection for rich, dark and satisfying dishes) and a truffle sauce.


I understand someone ordered the cod.  I understand this because I head him say express his disappointment when his neighbour was served the infinitely more stag-esque steaks.  I, however, saw not (nor photographed) the fish.  So, sorry, no reports. 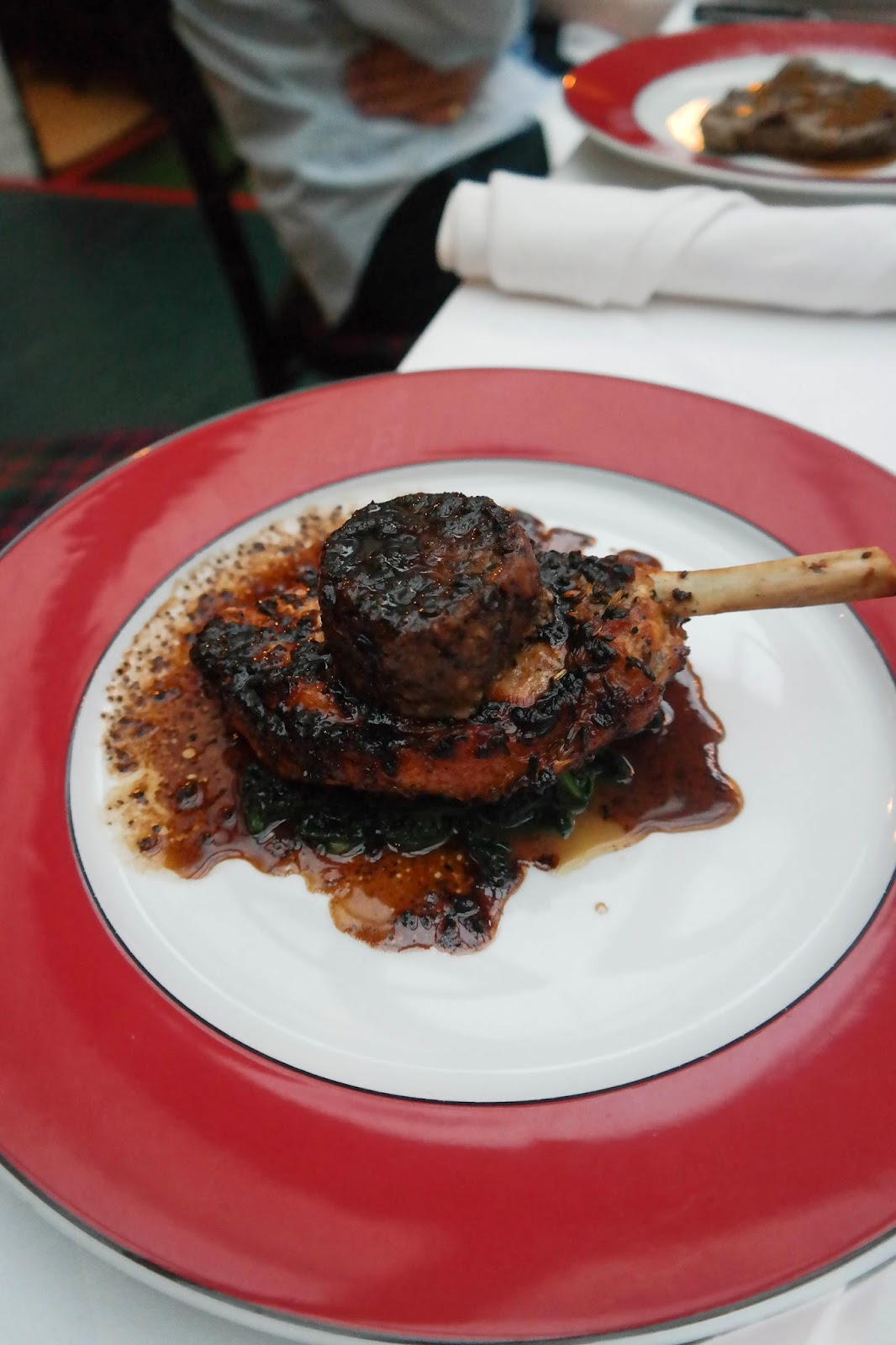 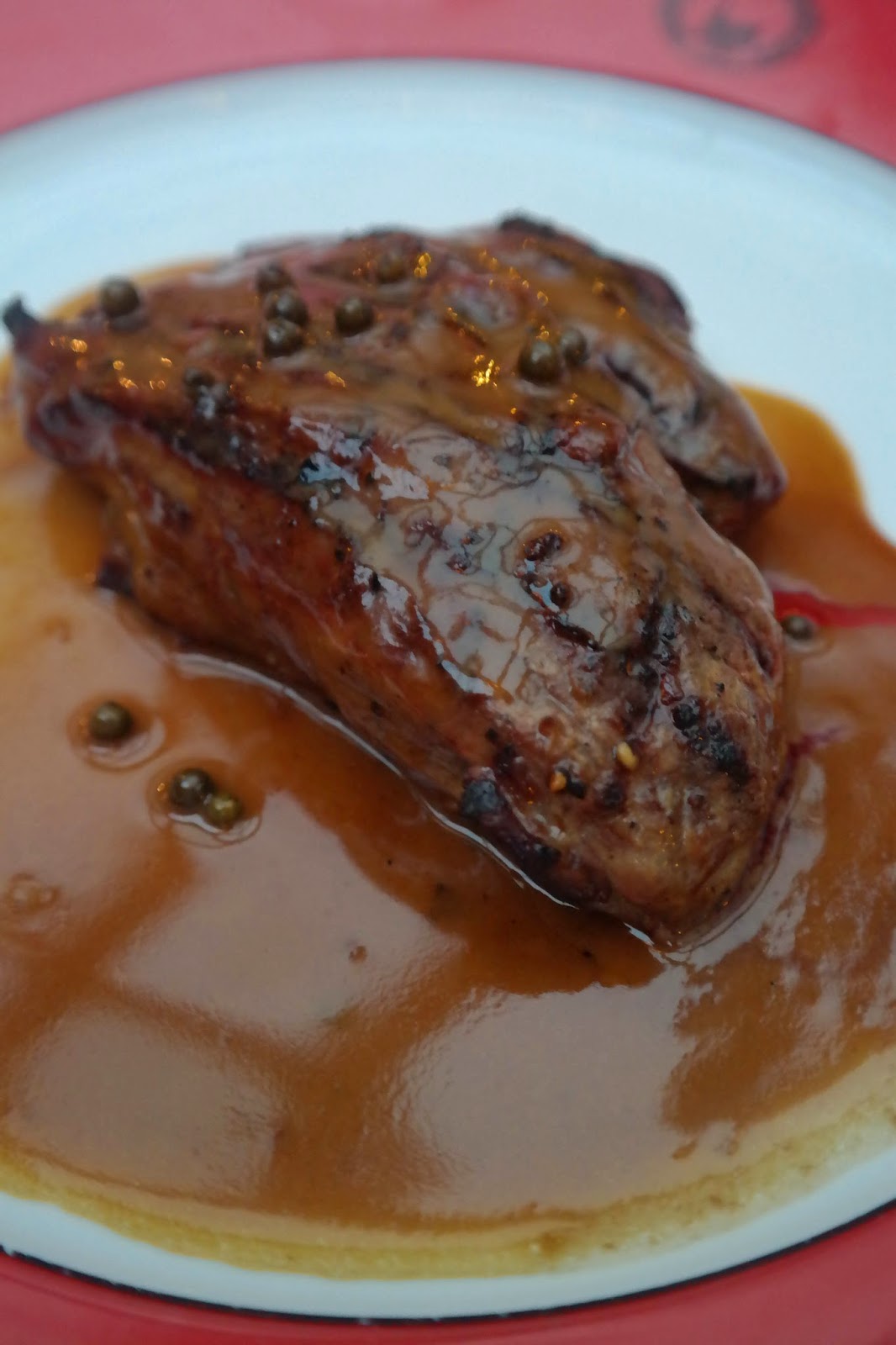 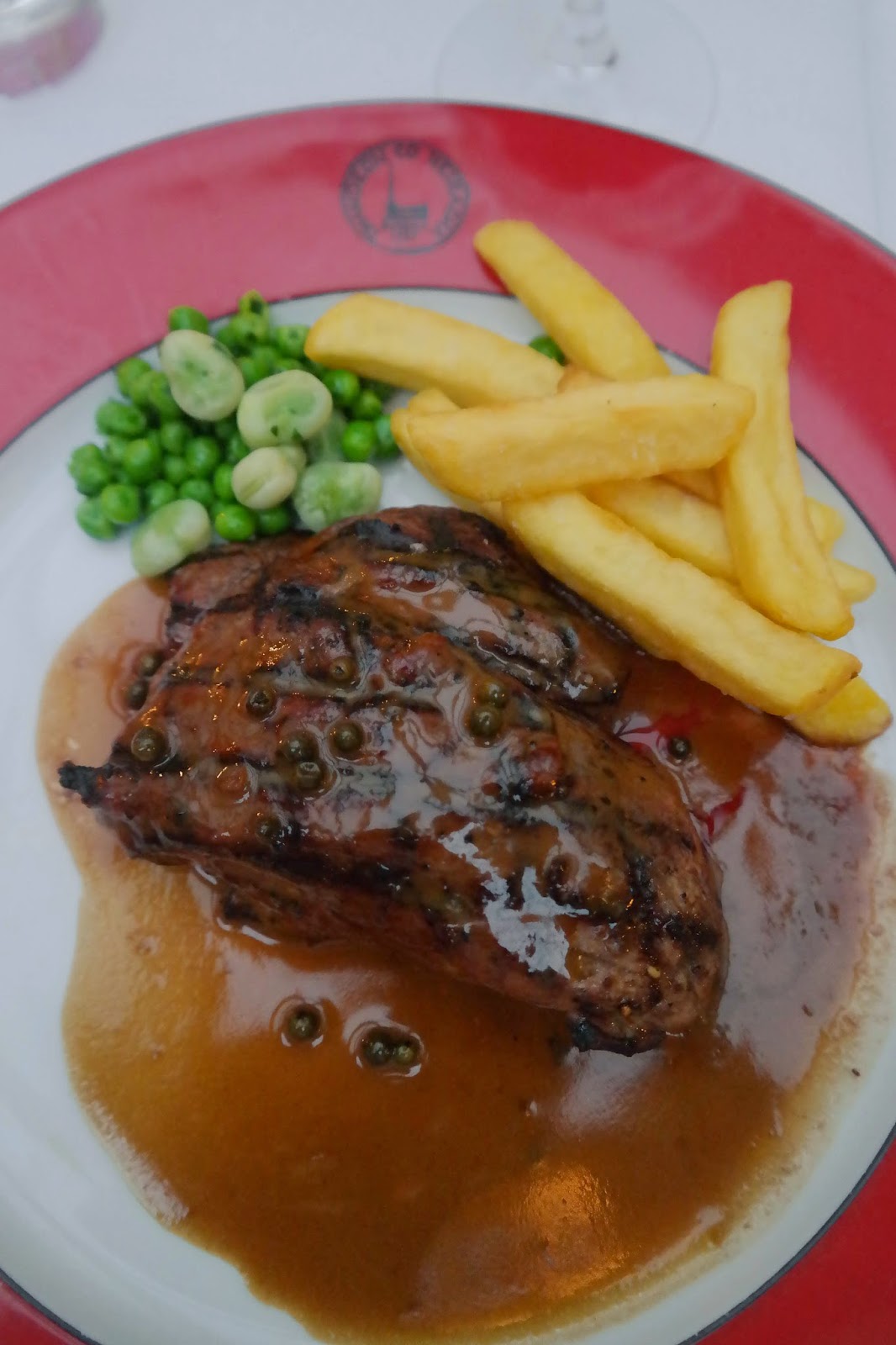 And for pud I finished up with a chocolate torte, honeycomb ice cream and almond brittle.  It was pretty damn tasty. 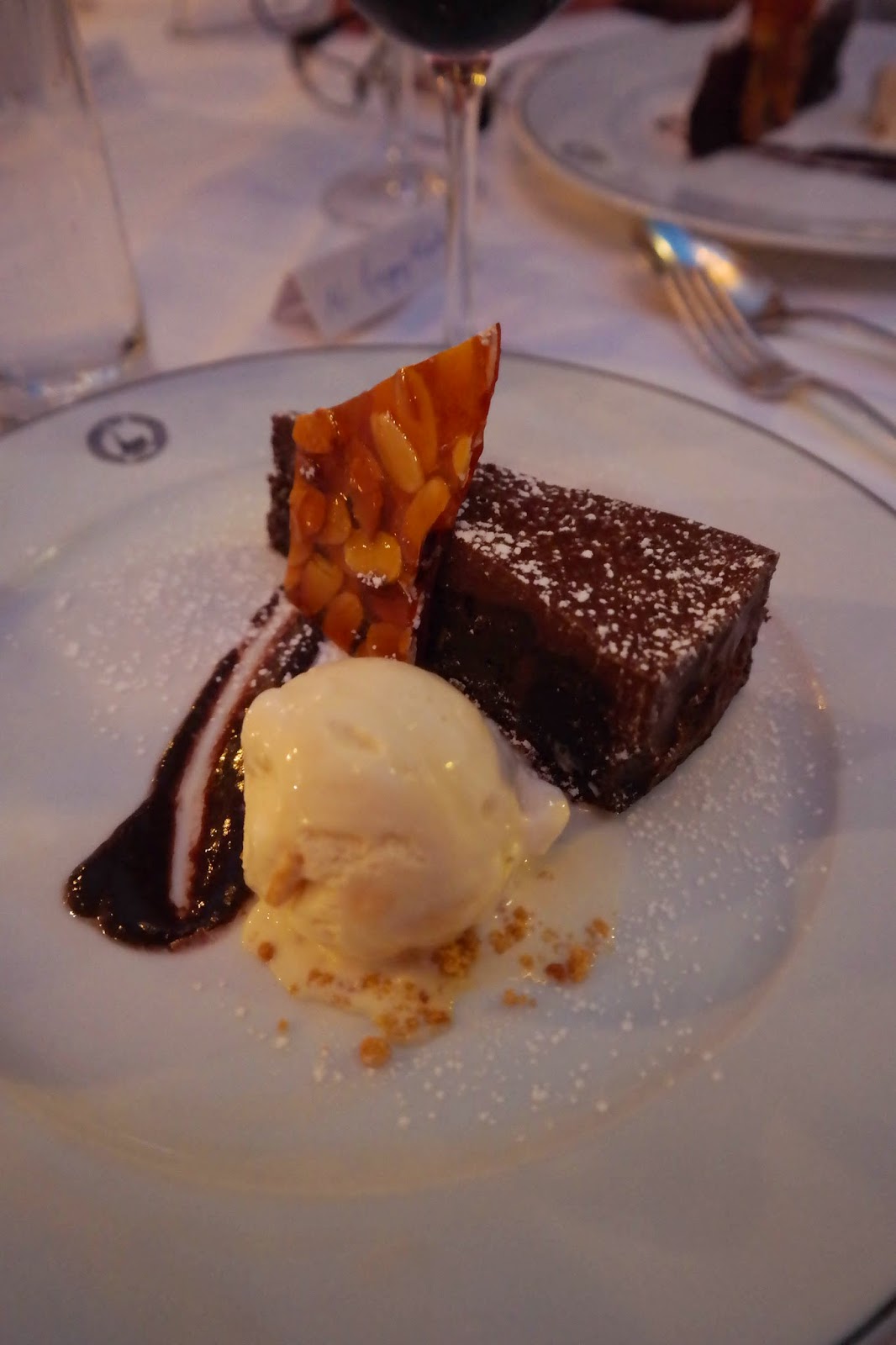 I am afraid that, by this stage, I was pretty pissed (hey, it was my stag, ok?) though, so I couldn’t be bothered to photograph or report on the other puddings.  I'm sure they were good.

What was good was the fantastic gang of friends that I spent the day with.  We had a great time together, and it was such a wonderful send off for me.  Massive thanks goes to Greg who put it together – a finer stag do I could not have imagined.  Also big thanks to James, the other best man, and Christian for putting me to bed (by 3am I really, really needed help…). 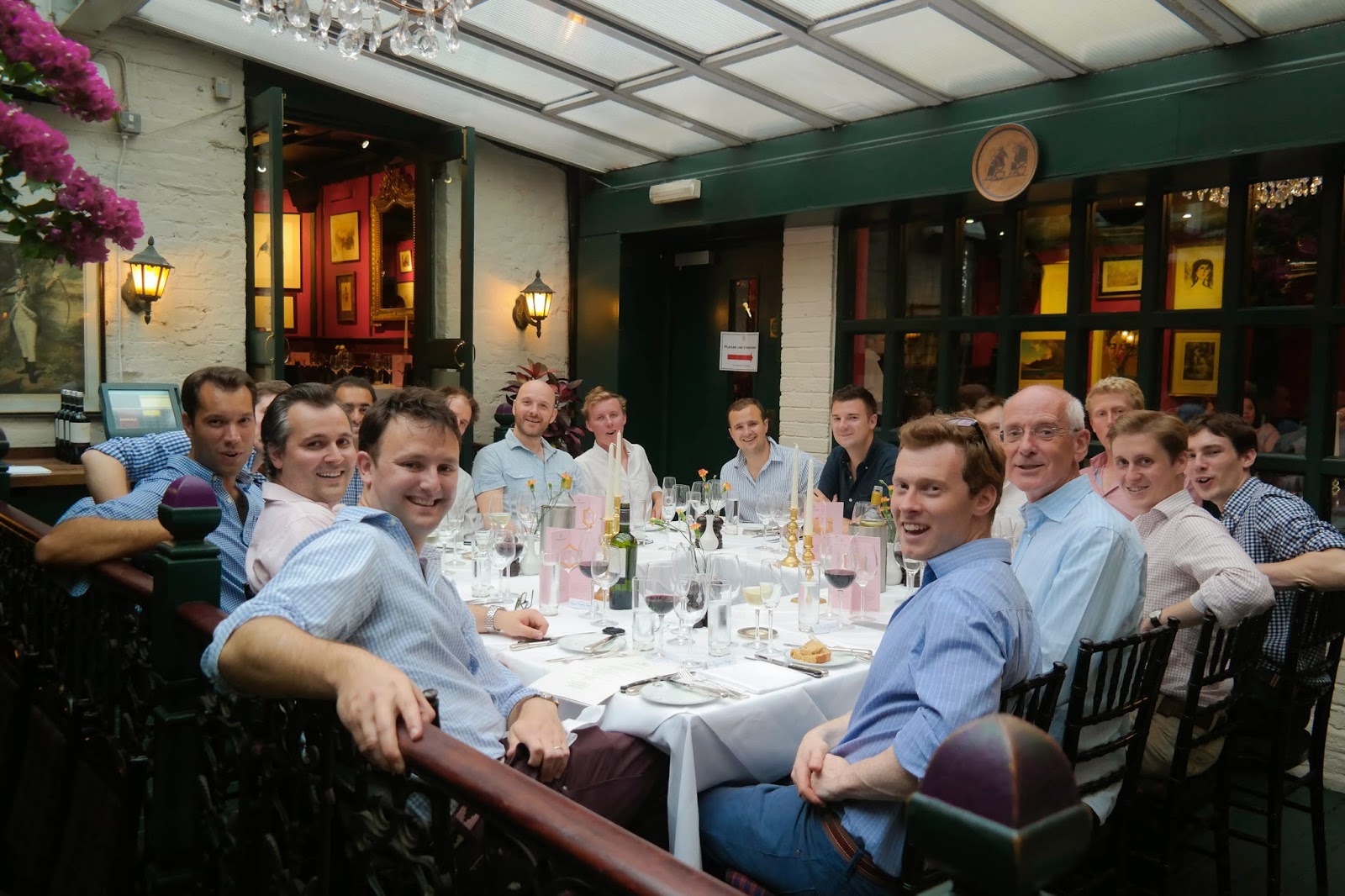 What a night to remember.