There were so many wonderful things to come out of the epic road trip that GrubsterGirl (now Mrs Grubster) and I undertook four years ago.  One of them was the discovery of pulled pork.

Now, you're probably laughing at that – how could he never have had pulled pork until 2010? - but I swear that one in London had really heard of pulled pork back then.  It certainly wasn't the massive, omnipresent, pervasive food that it is today.  Sure, a few venues had popped up serving the stuff – Bodean's comes to mind – but it was much less of a thing then that it is now.  Indeed, other than a few specialist places, like Pitt Cue Co., the Deep South BBQ experience hadn’t really hit Britain's mainstream food scene then.

It was in a roadside diner that we first tasted it.  We were on the road between Death Valley and Las Vegas and we were getting hungry.  So we pulled in at the first place we saw that wasn't a MacDonalds / Burger King / Subway.  There were a lot of Harley Davidsons parked up outside, and I began to feel good about this place – clearly, this was classic Americana.  We wandered into the bar which was thick with cigarette smoke and busy with Hell's Angels.  We decided to eat outside instead.  Little did we realise then that we had stumbled into the infamous Mountain Springs Saloon – a regular biker haunt.

So we ordered up the special of the day: pulled pork buns, slathered in BBQ sauce, and a cream soda each.

The below recipe bears no relation to that – indeed, it's barely even proper pulled pork as it's simmered in the oven not smoked on the grill.  But I don’t have a 6 foot long smoker, or even a garden to put one in, so this is really the best I can manage.  It also tastes pretty decent too.

I used a dry rub to season the meat first.  Rubs are another Deep South thing – basically, you take dry herbs and spices and rub it into the meat, leaving it overnight as a dry marinade.  It's well worth the effort.  This recipe makes about twice the amount you need, but that's ok because it can be stored in an airtight container for ages.  If you're barbequing cheap meat over the summer a really good idea would be to apply the rub the night before (although a mere hour marinade will make all the difference) and let it wallow.  That way your meat will taste all the better when it comes off the grill.

Dr Pepper is a Texan drink.  Most people don’t know that, but if you ever go to Texas they won't let you forget it.  In a town in Texas called Shiner I remember being asked by a young Texan if we had Dr Pepper in the UK.  She was surprised that we did.  It's a Texan drink, ya see.  I've used it here, instead of the more usual Coca Cola, to try to capture a little bit more of that taste of the South.  Surprisingly, it worked pretty well.  I also threw some bourbon in, an additional tip of the Stetson hat to the South.  I used Jack Daniels* because I had it kicking about in large quantities, but you could really go with anything. 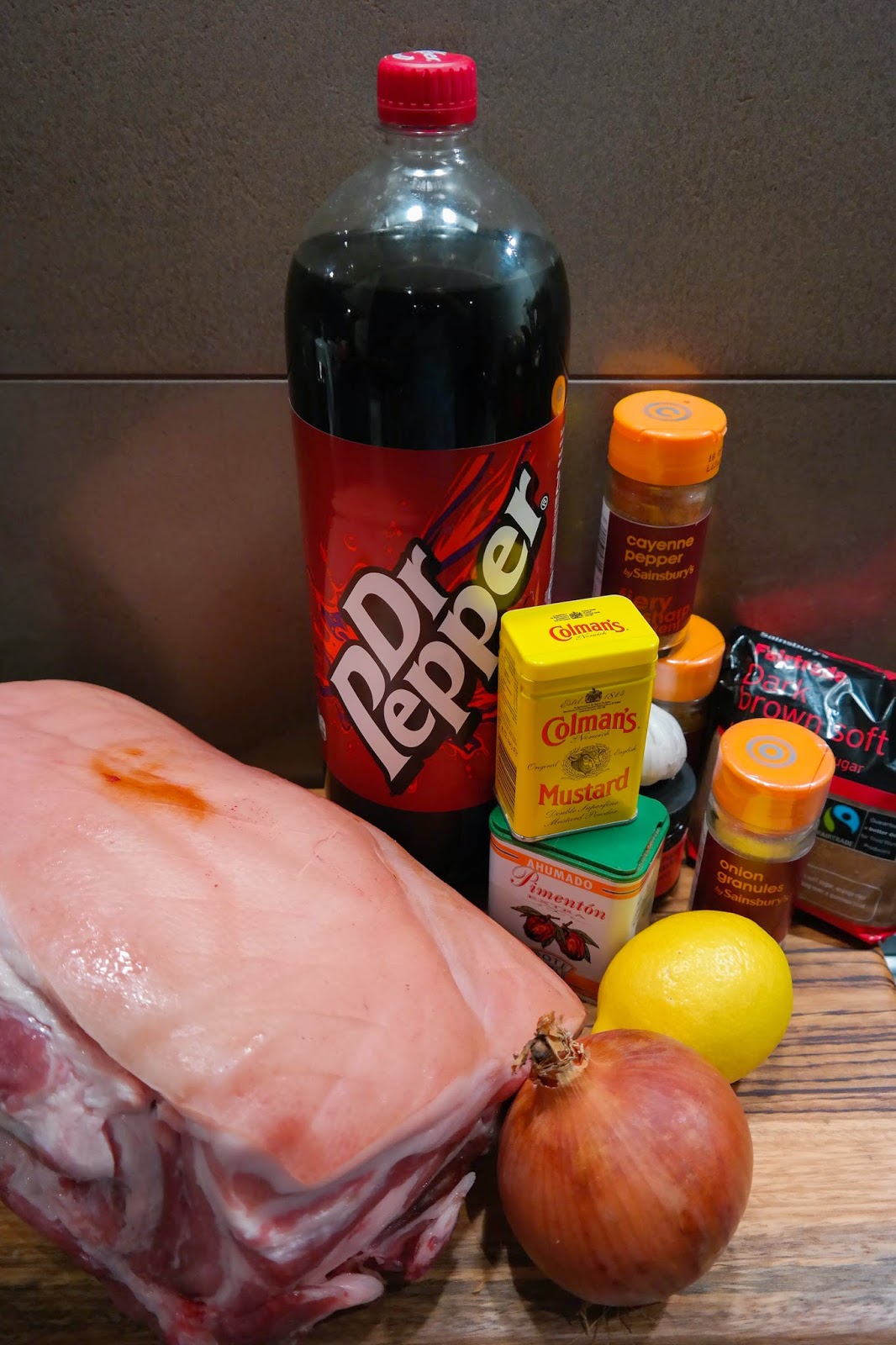 For the dry rub -

This takes a little bit of time.  OK, it takes a lot of time – a couple of days if you're doing it properly - but it's totally worth it.  Just hang on in there.

1. Start by making the rub.  Basically, put all the ingredients in a large mixing bowl and stir until completely combined.  There's no particular magic to it. 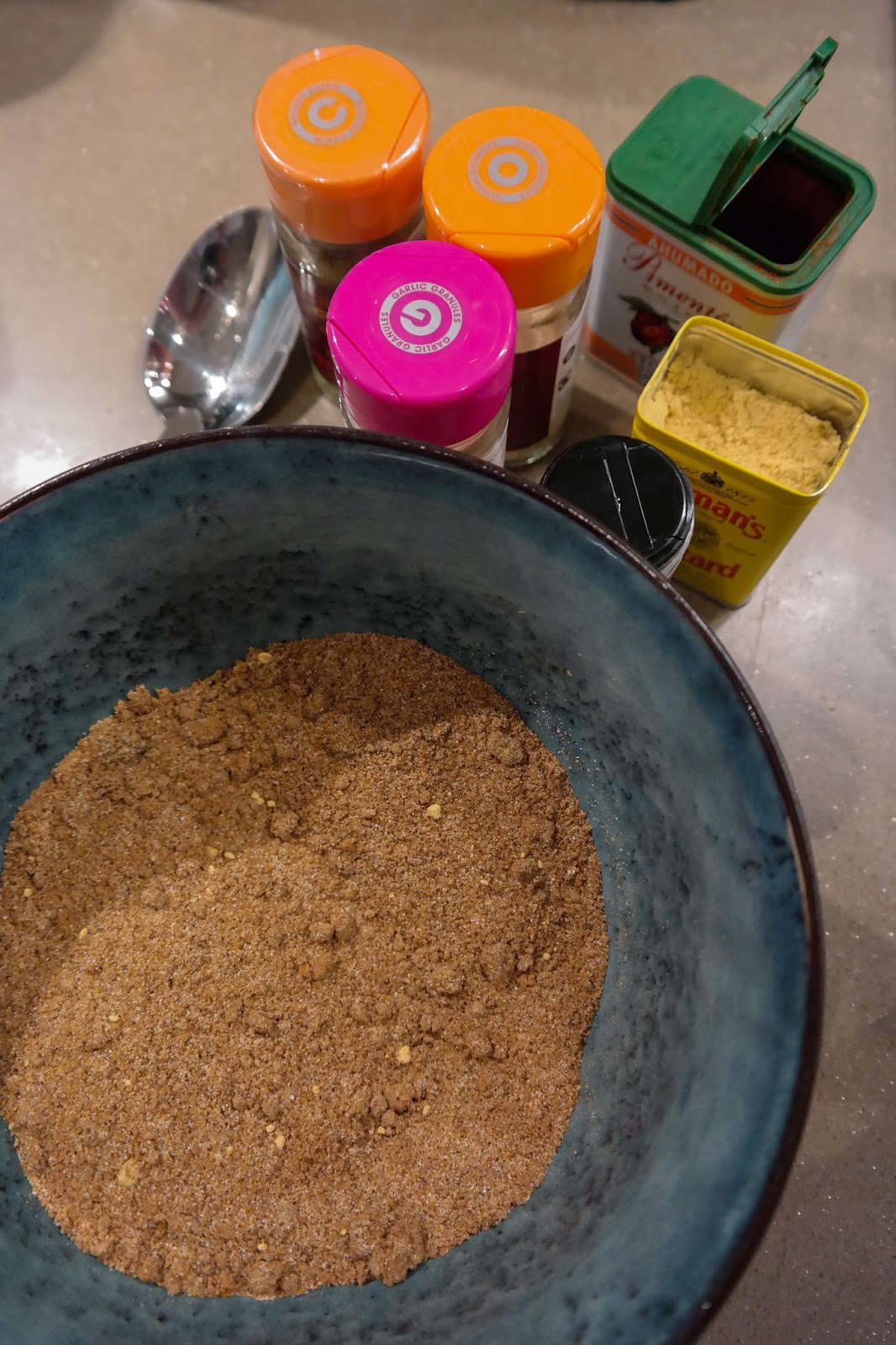 2. Prepare the meat.  Trim off any rind as much of the surface fat as you can.  Trust me on this – your joint ought to be a particularly fatty piece of meat, you don’t need any more than is already in there.  You are going to end up with a fatty dish regardless, I'm just trying to slim down the quantity of it (you'll thank me later – namely at step 5). 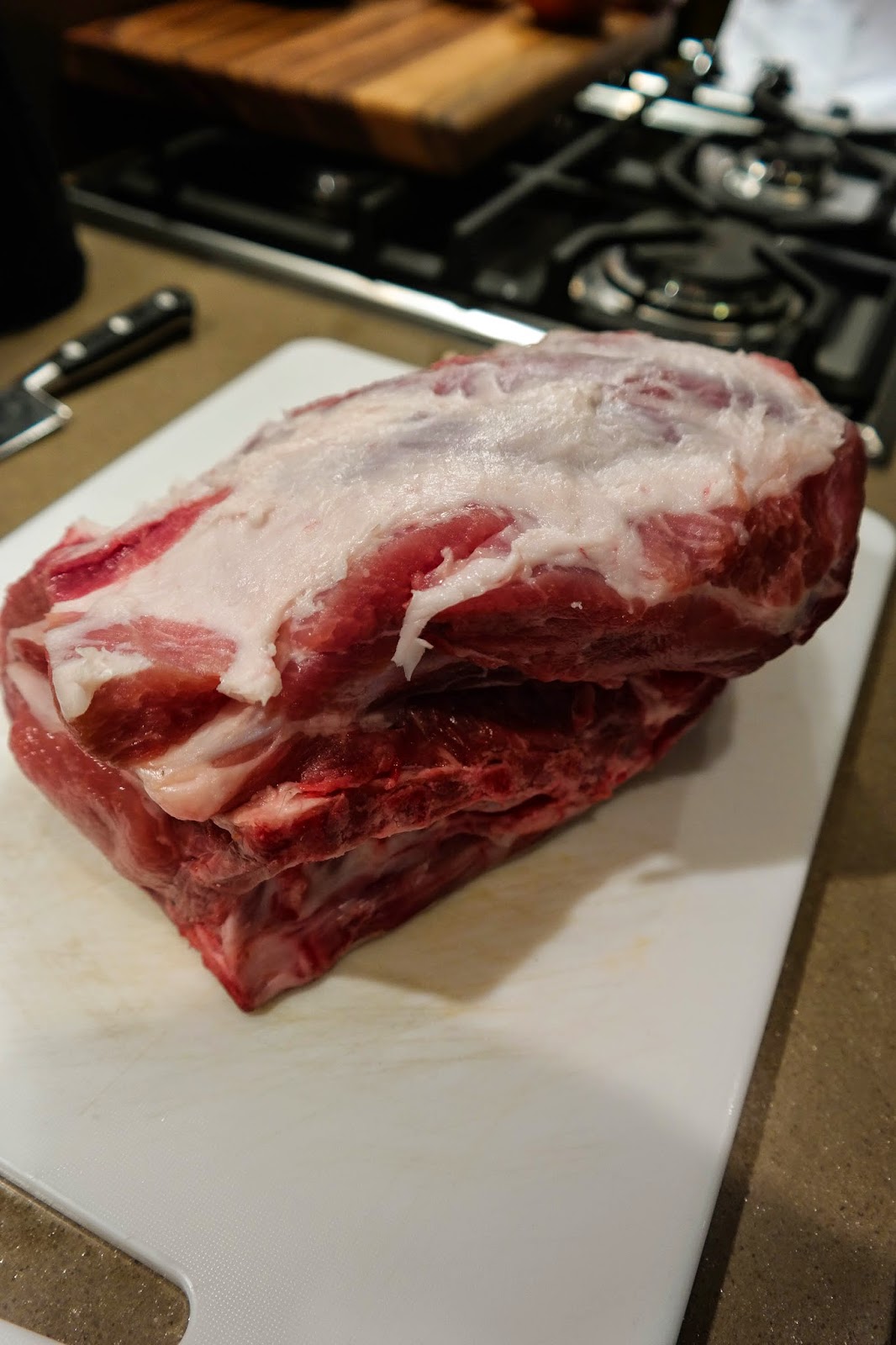 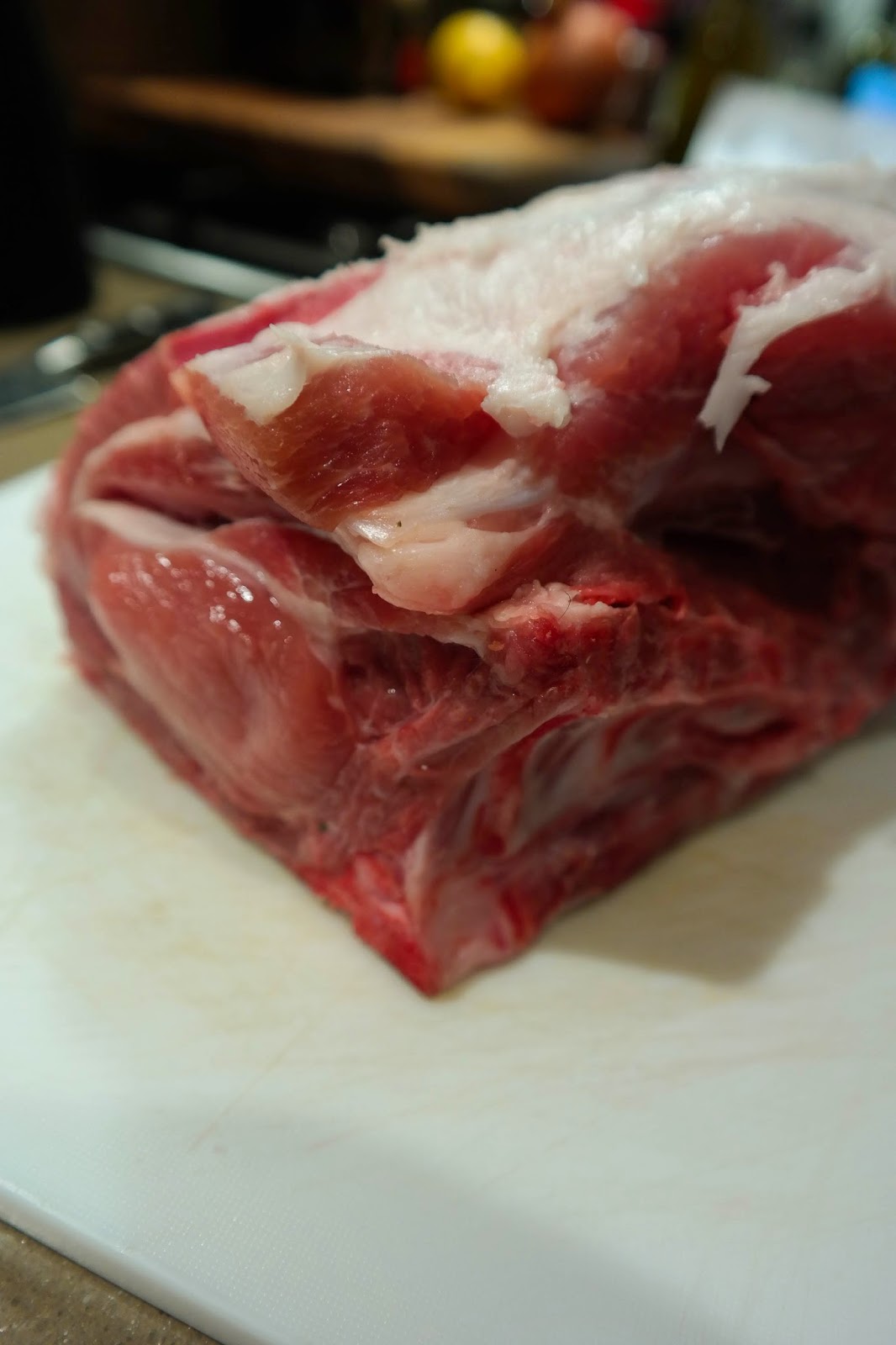 When trimmed, take handfuls of the rub and liberally (and literally) rub it into the meat.  Make sure to get it into all the nooks and crannies, underneath and folds in the meat, in between the joins of the muscle and bone, and really get it lodged in the grain.  Then wrap it all up in cling film and stick it in the fridge overnight. 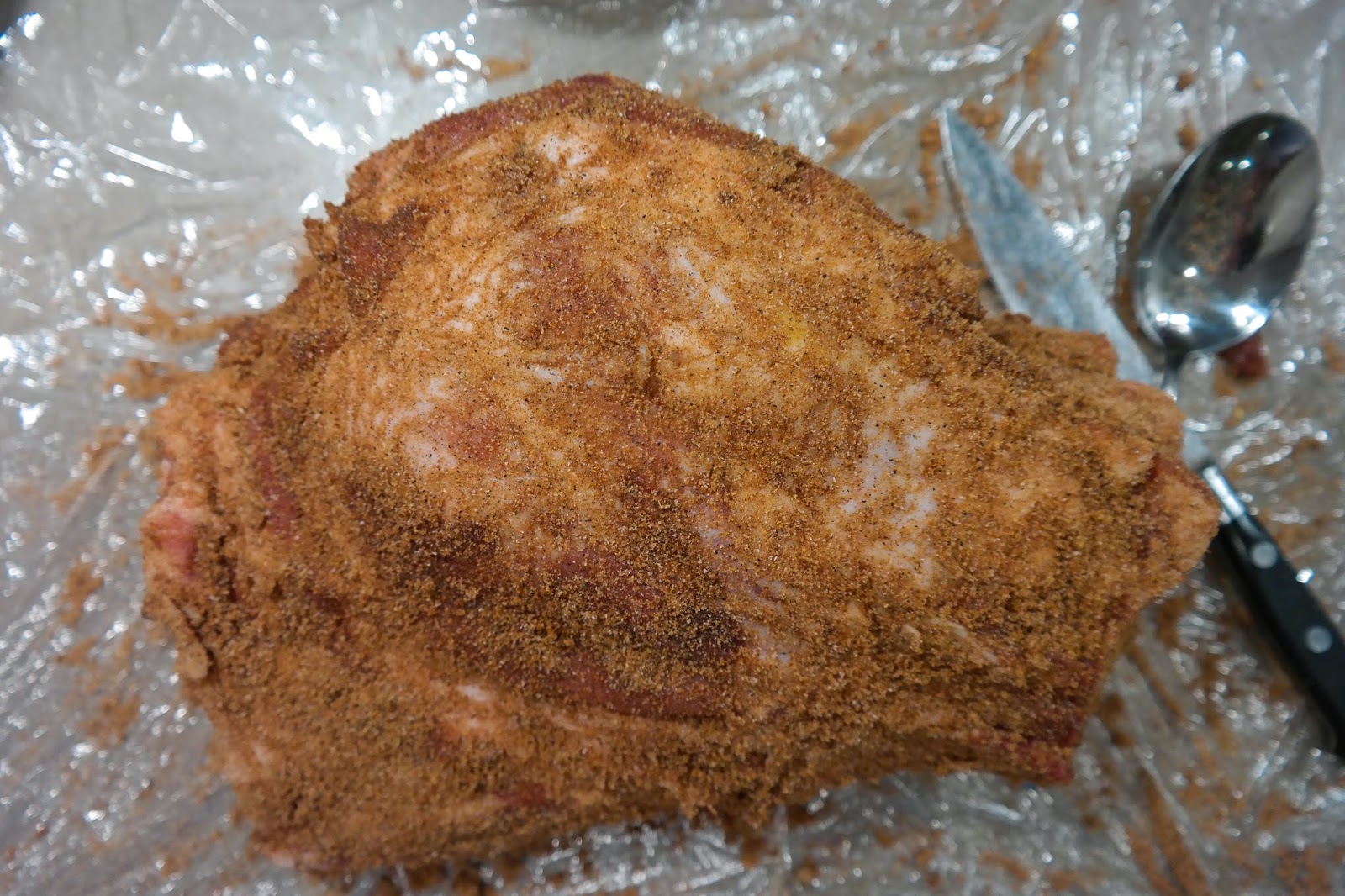 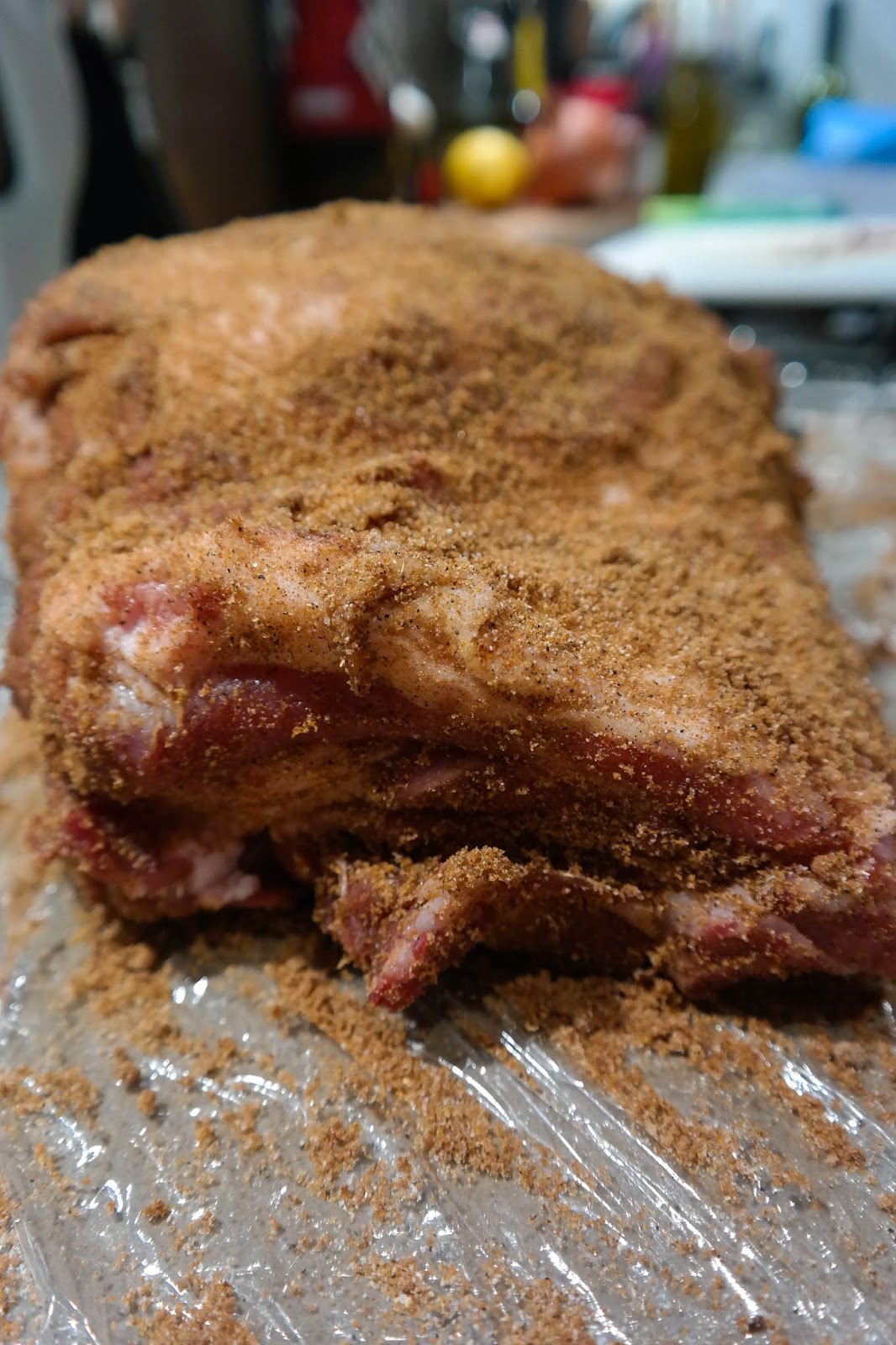 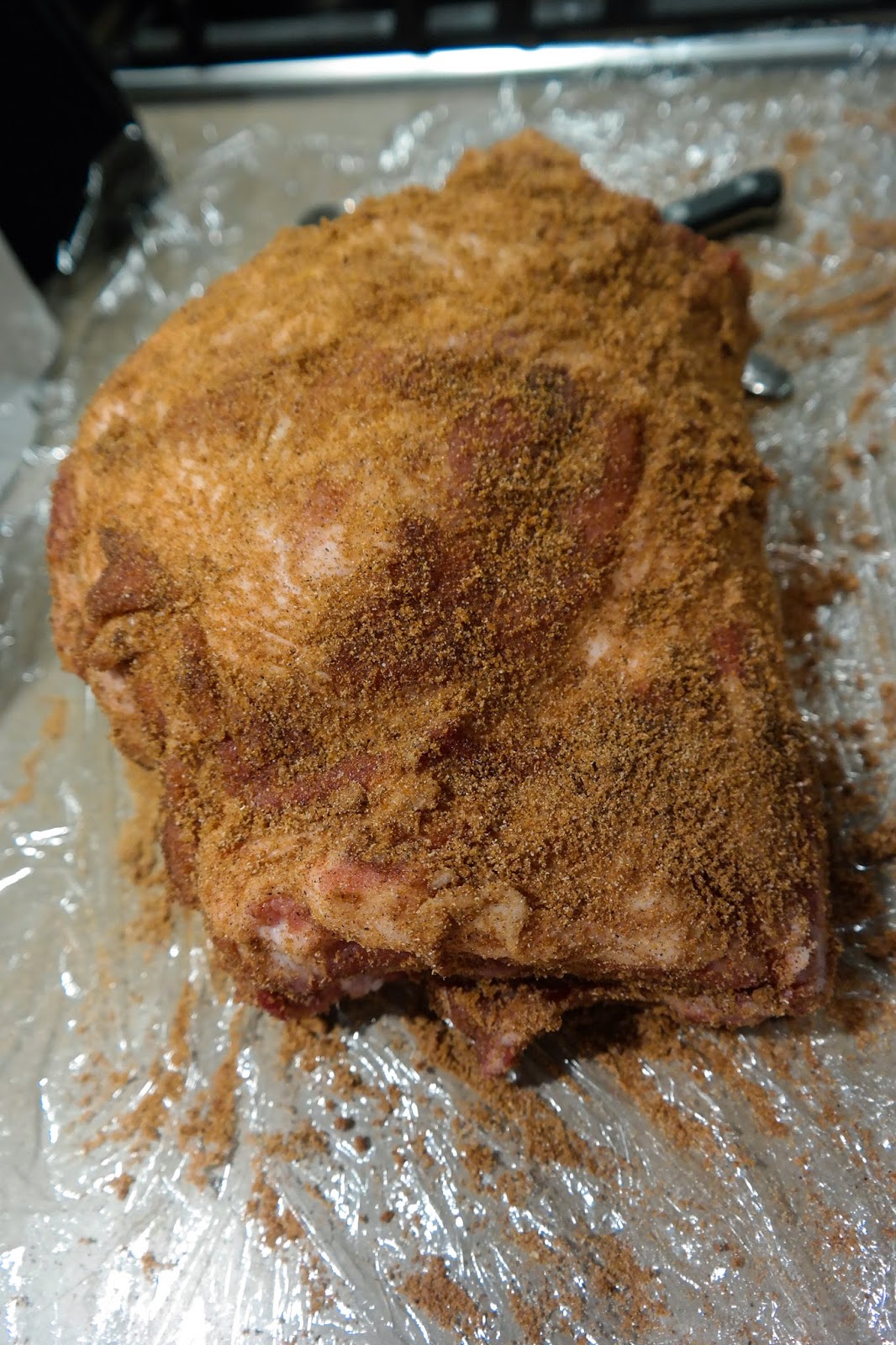 3. The next day get the meat out and let it come up to room temperature.  Pre-heat your oven to 150ºC whilst you're waiting.  You'll see that much of the rub as sort of 'soaked in'. 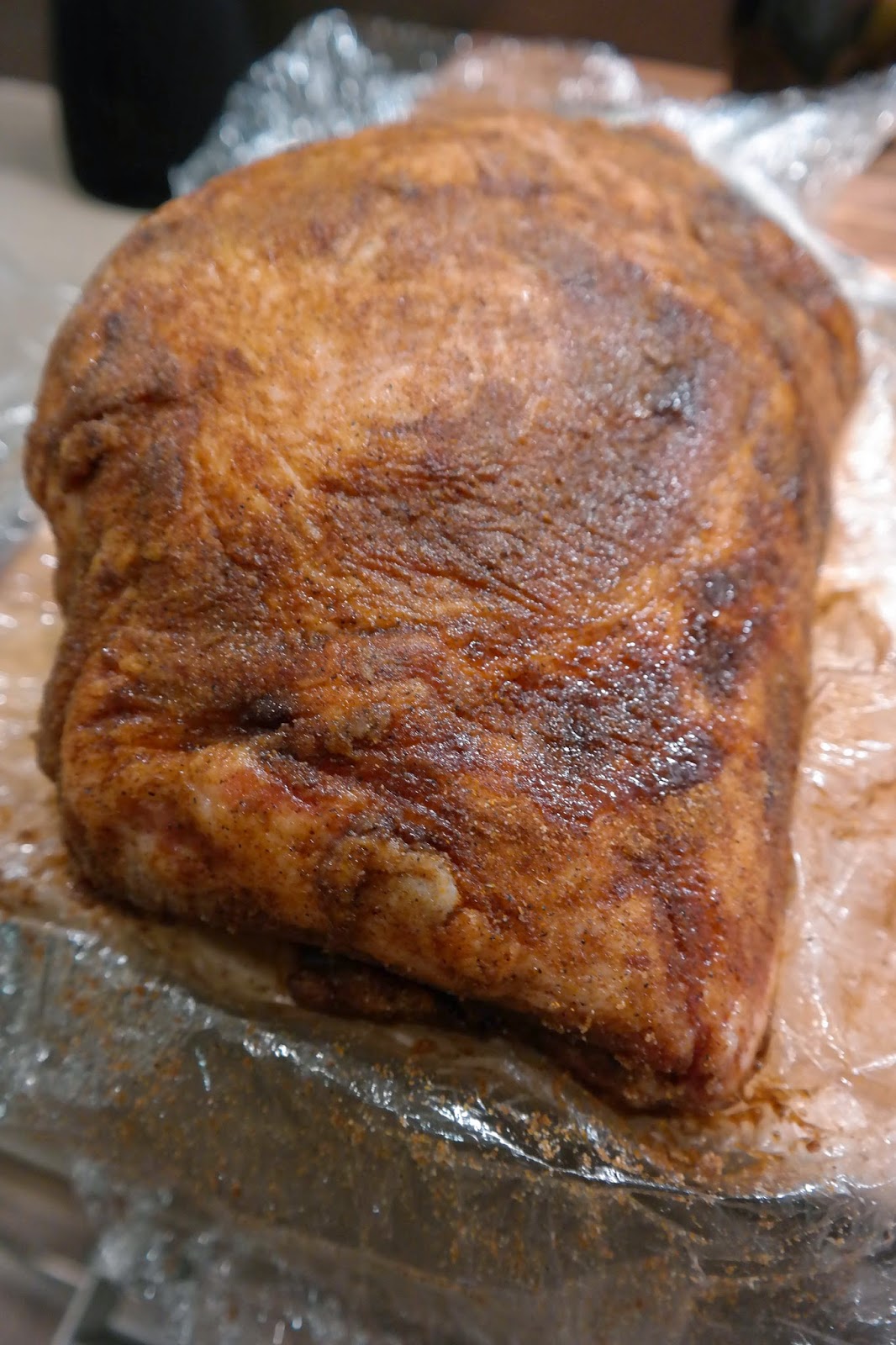 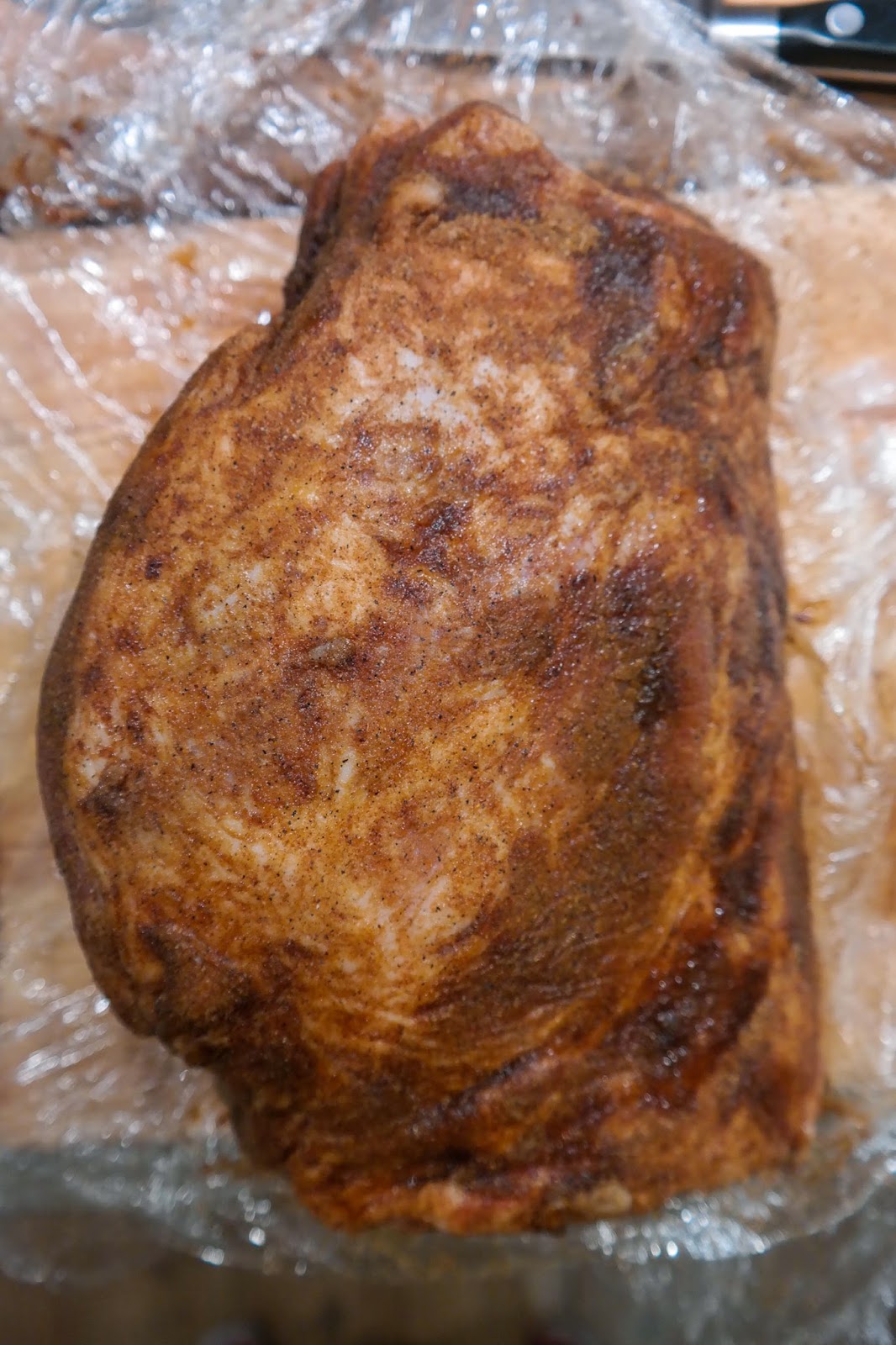 4. Top and tail and peel the onions, then cut them into eight parts before throwing them into the bottom of a large, cast iron casserole dish (or the nearest equivalent you can muster).  Bash the cloves and stick them in the dish – no need to bother with any fiddly peeling, you'll not be eating these, just tasting them. 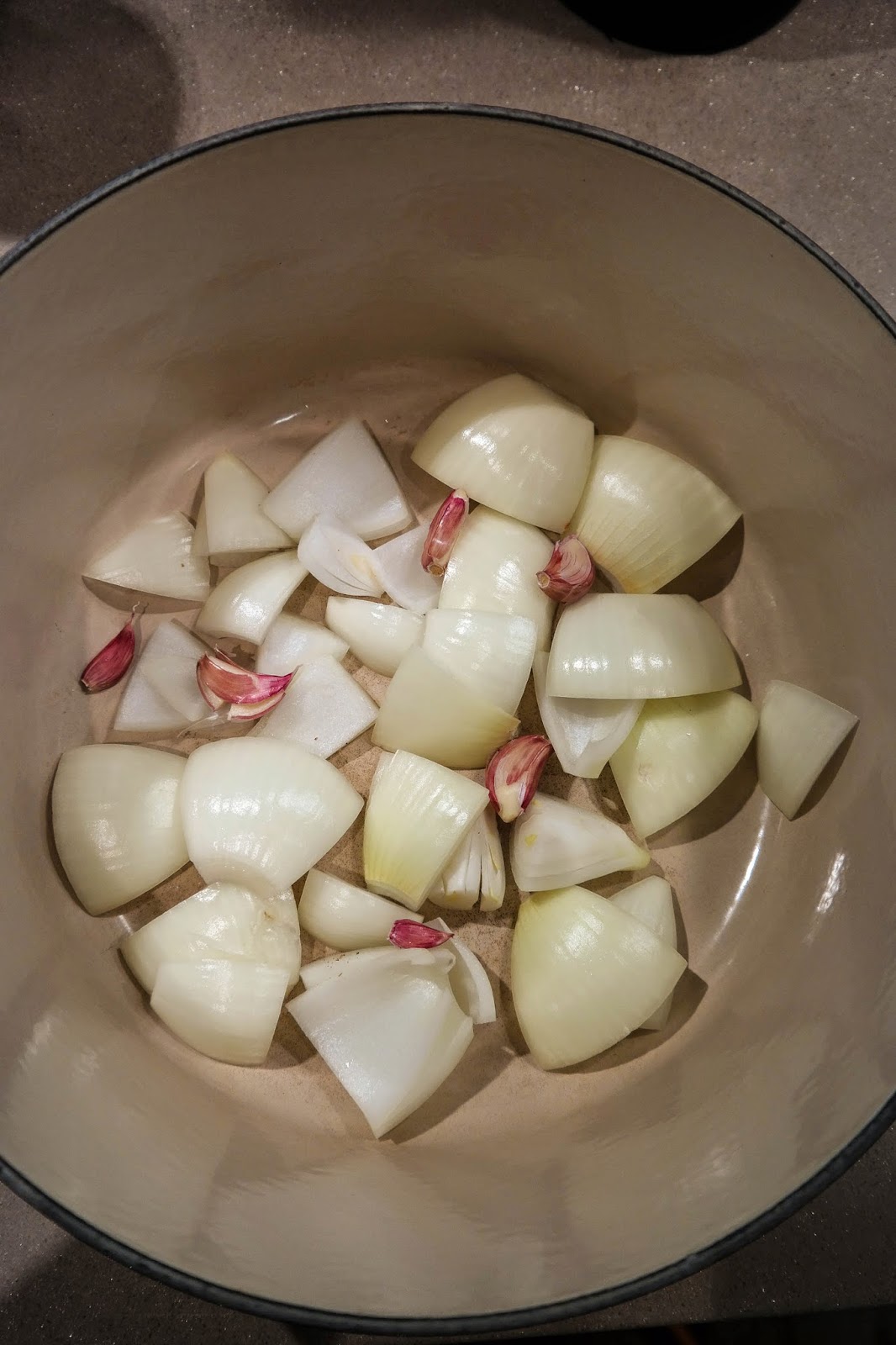 Unwrap the joint and place this on top of the onions. 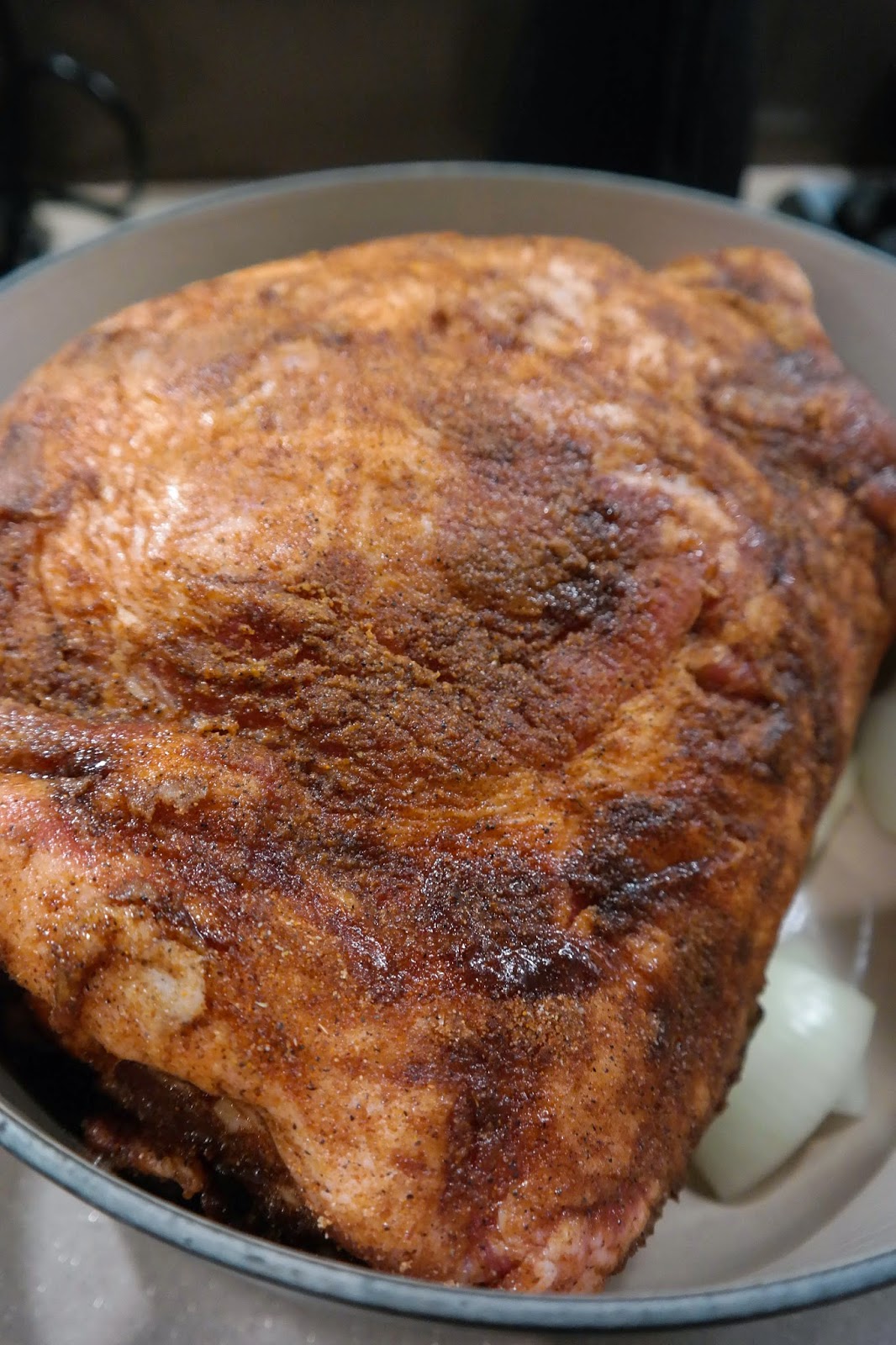 Empty the jar of chipotle paste into pan and pour in the bourbon.  Now add the Dr Pepper, pouring so it comes about three-quarters of the way up the pan.  Put the lid on and stick it in the oven.  It needs at least 6 hours, but I actually did mine overnight.  It needs to be turned a couple of times during the process, however, so overnight won’t necessarily work for you.  It's done when you can flake the meat away from the joint with a fork. 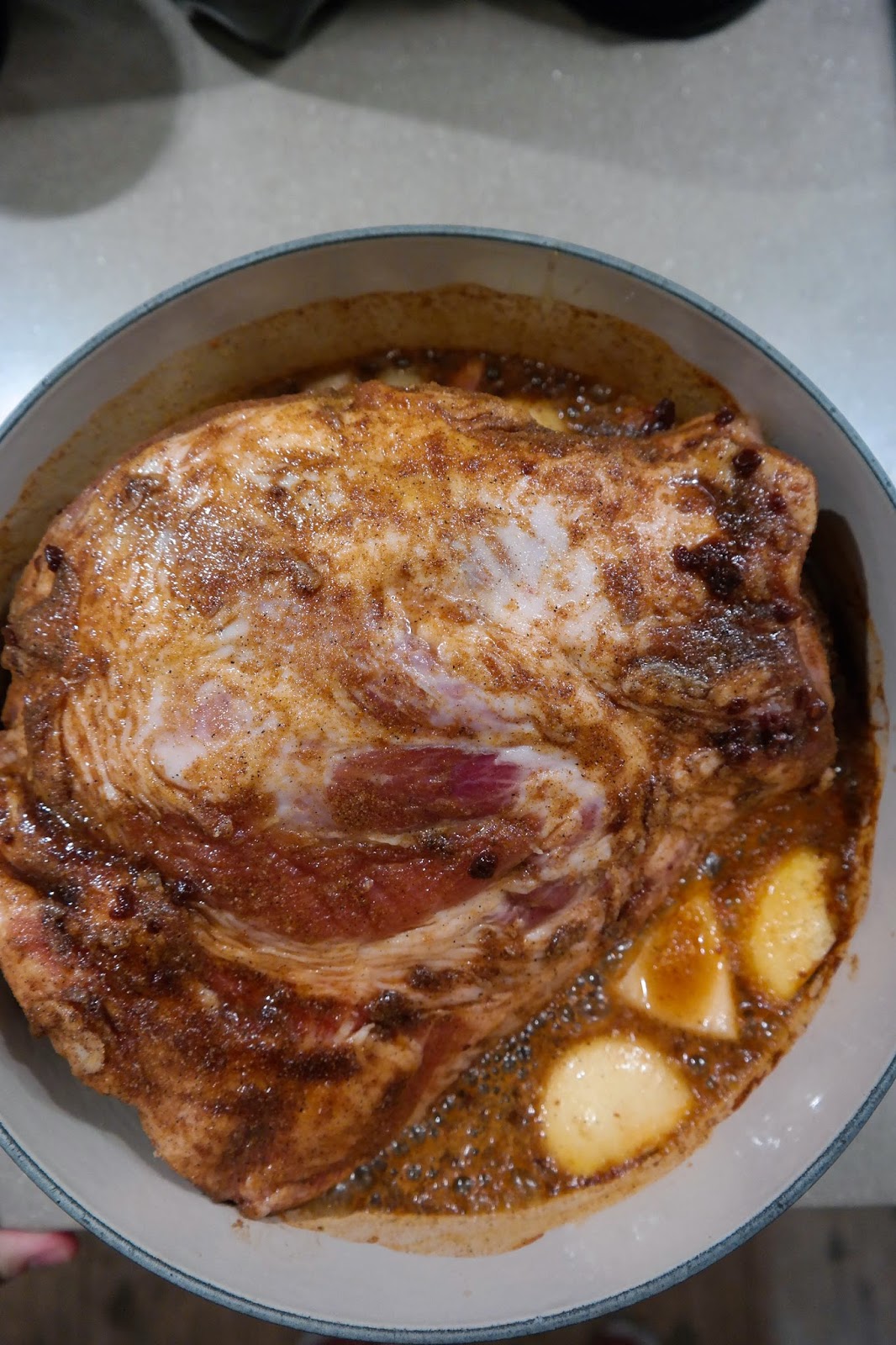 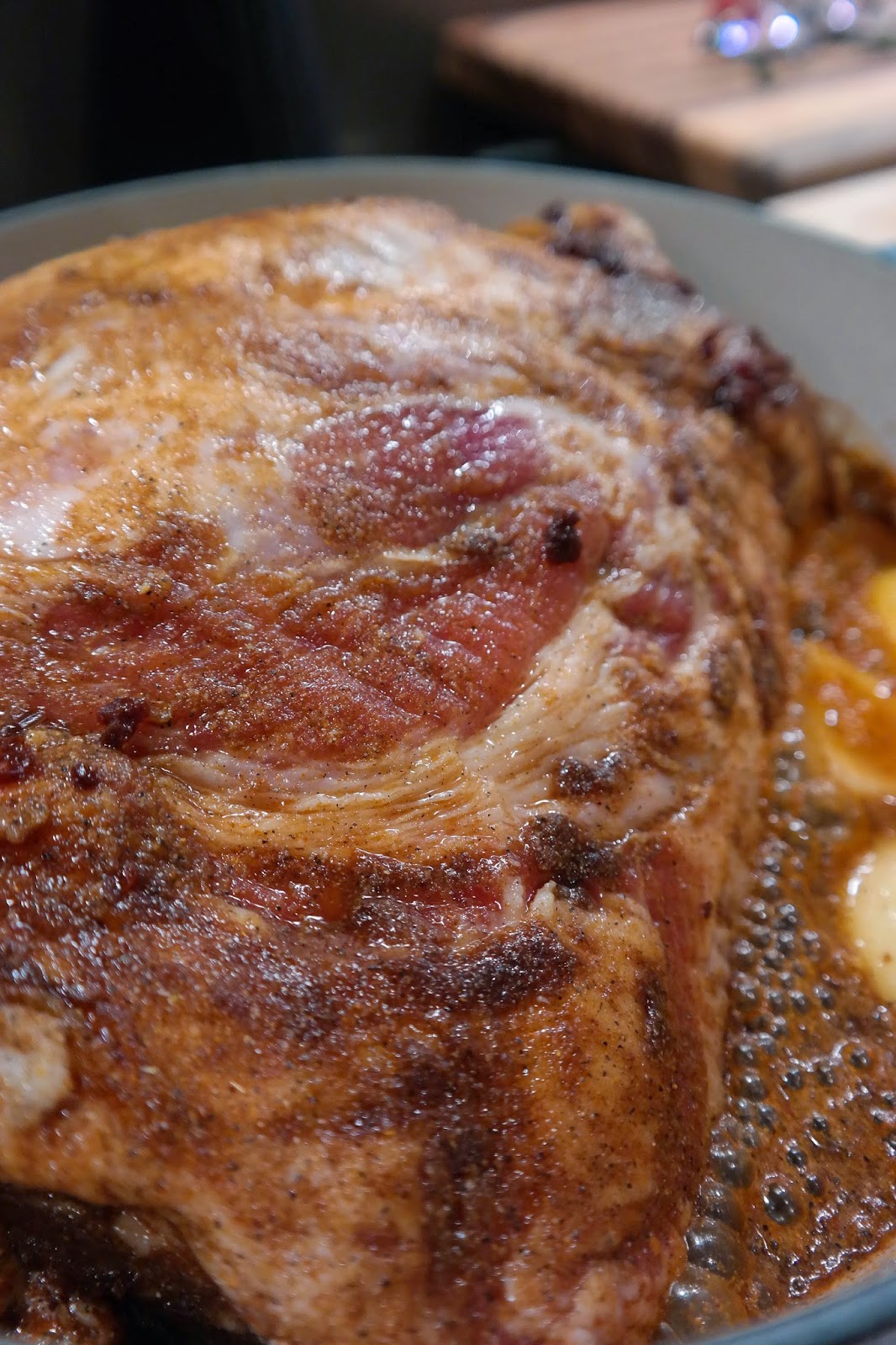 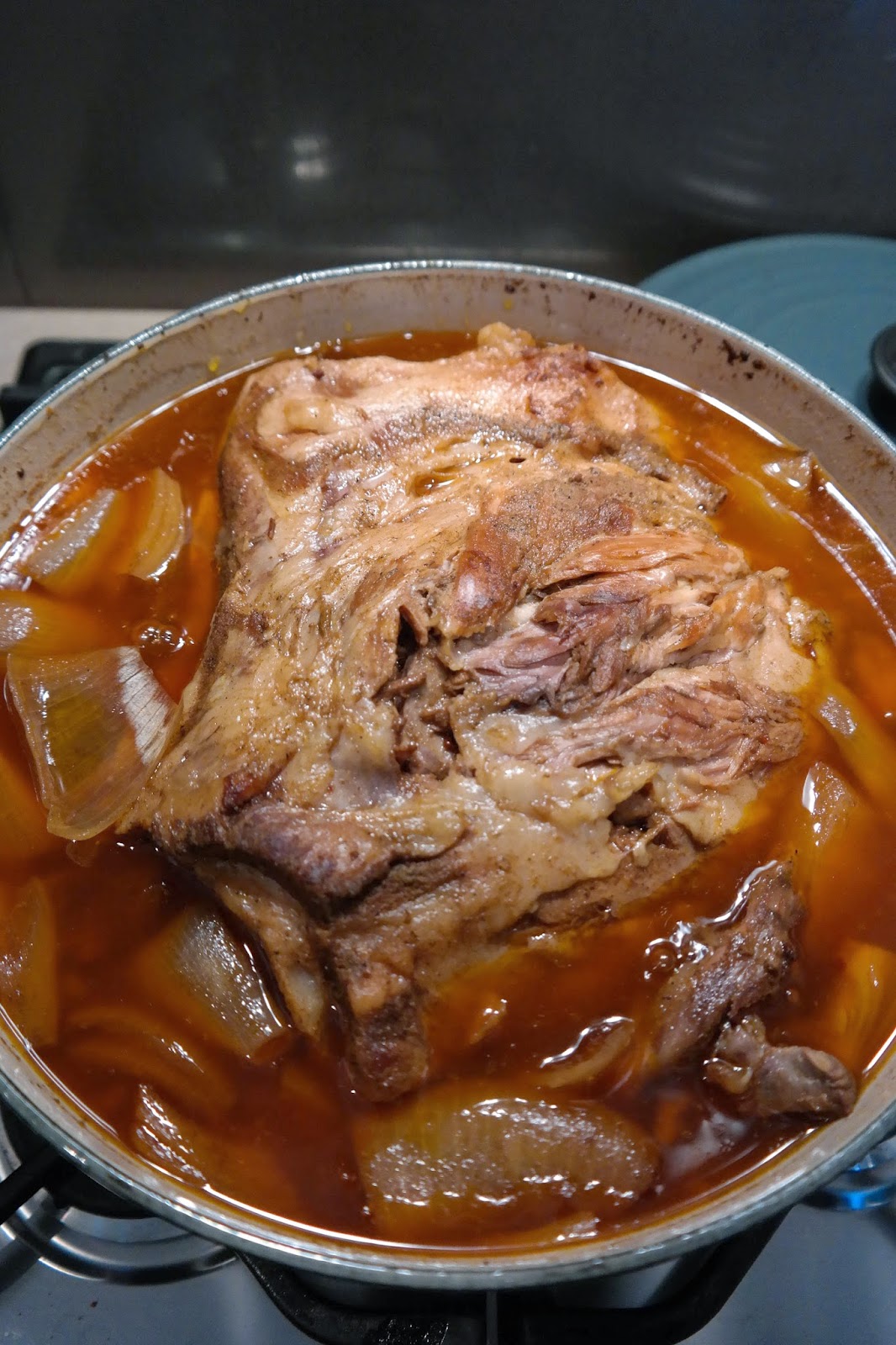 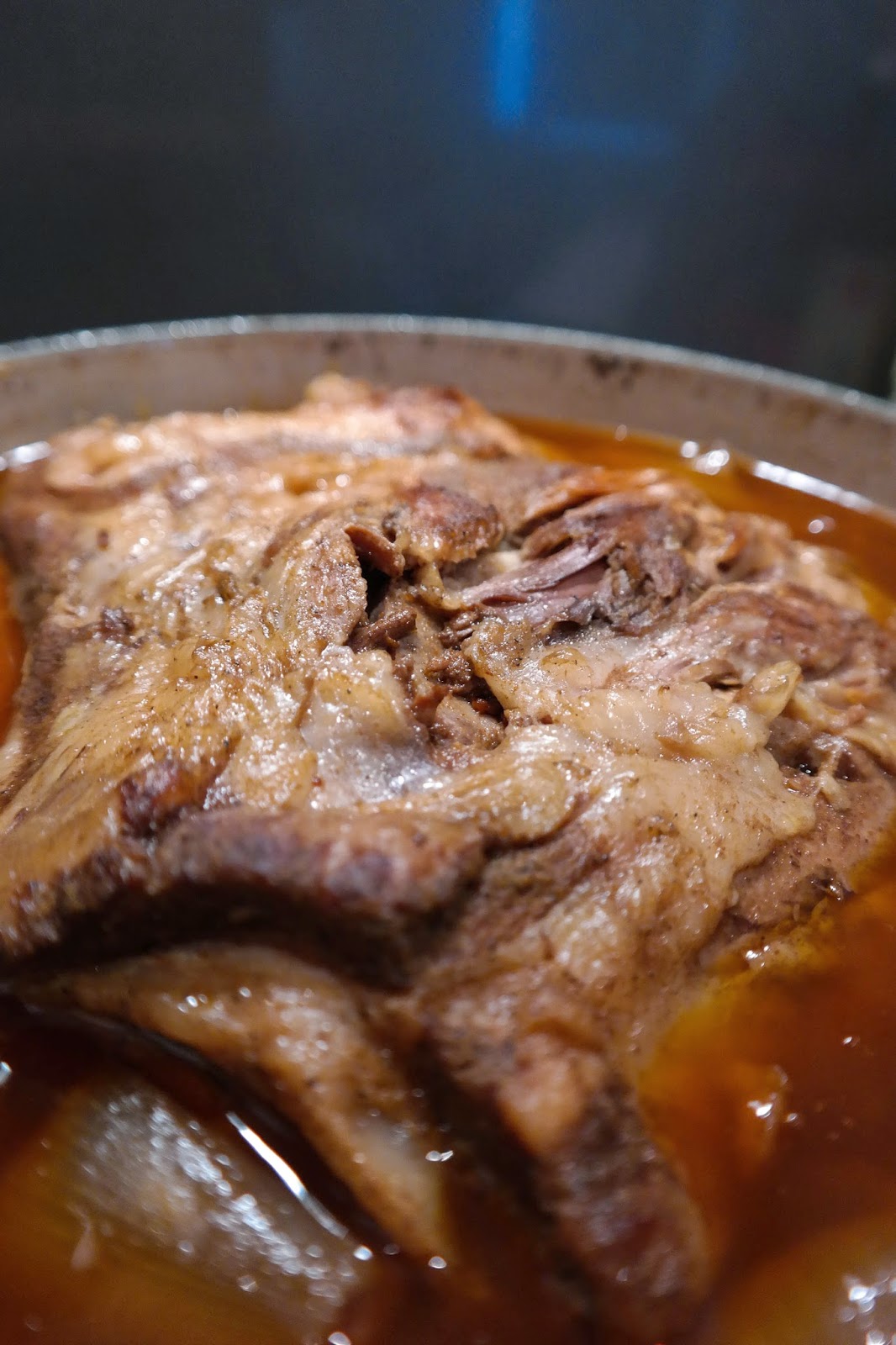 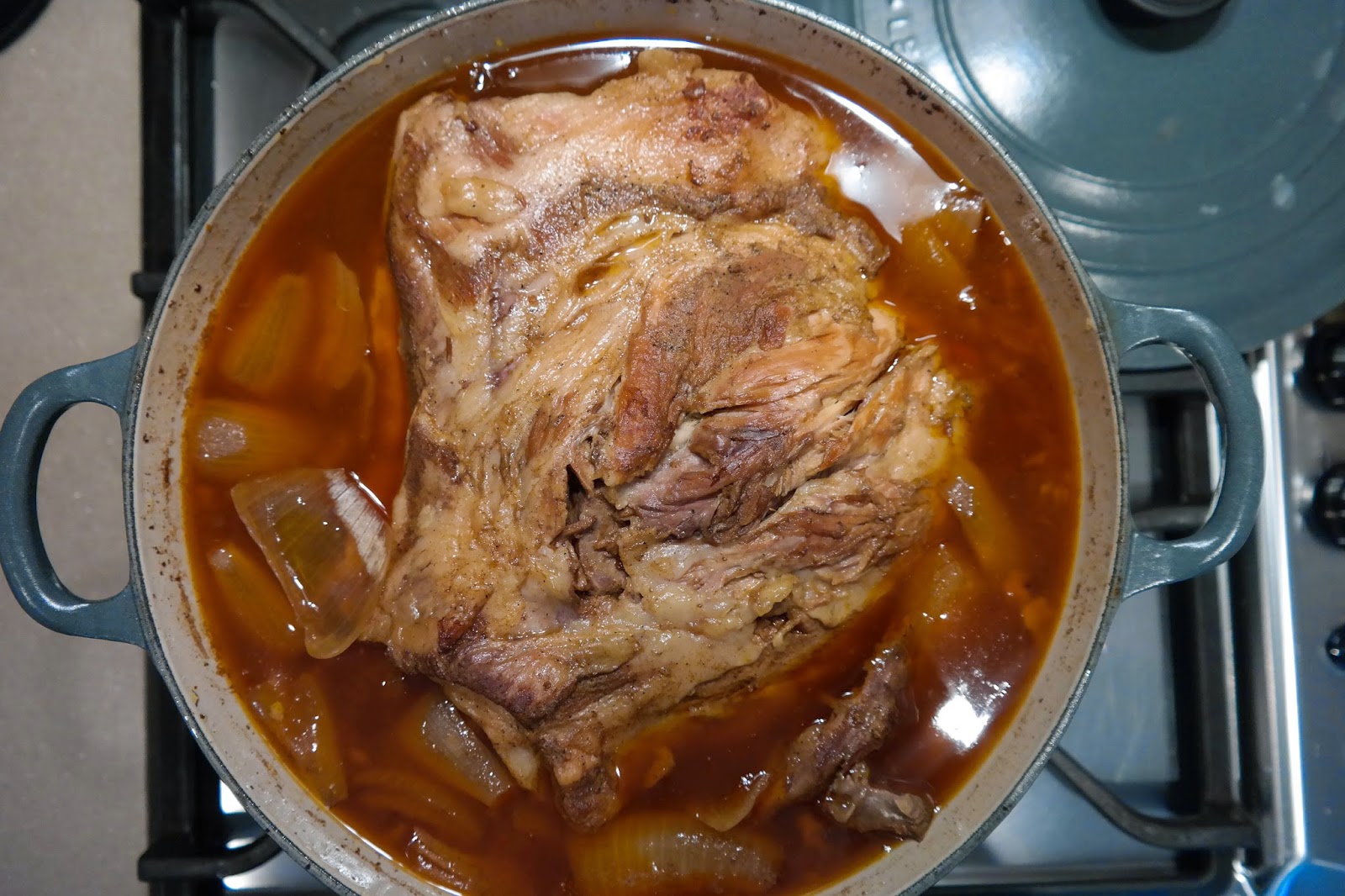 (Turn two... See how the sauce has reduced a little and gone a bit darker.) 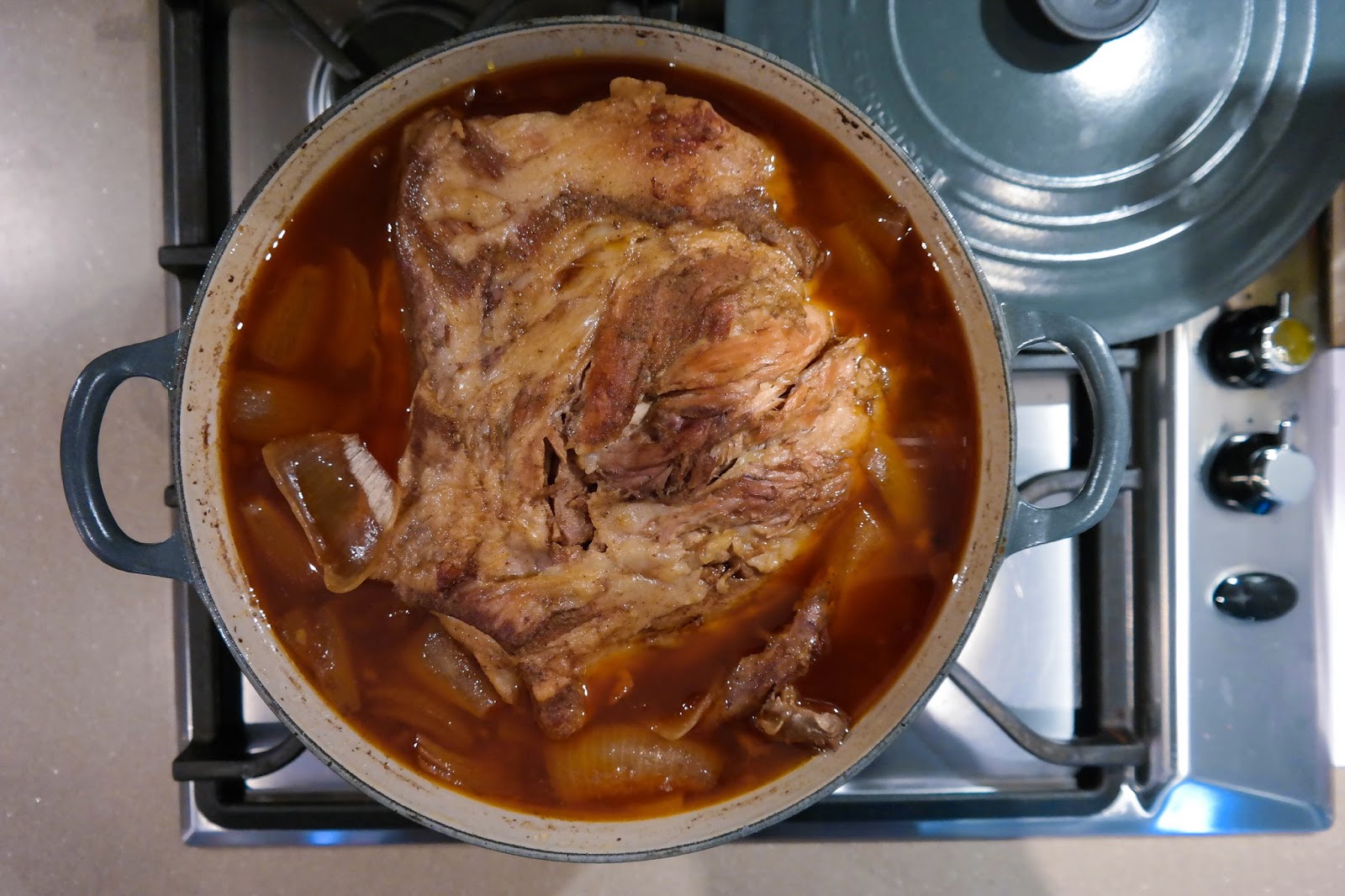 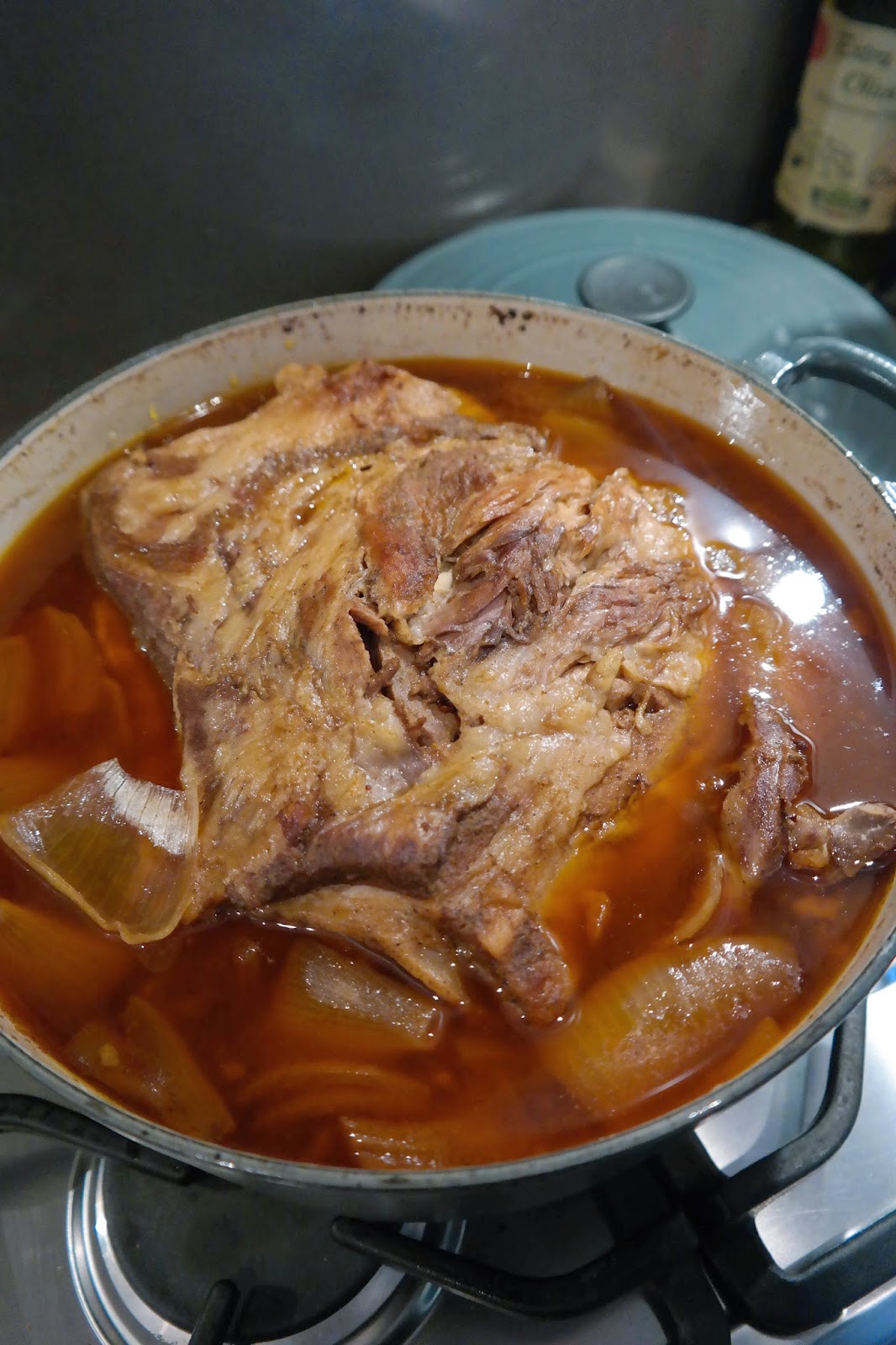 5. When done, remove the joint from the liquid, but strain and keep the liquid.  Allow the pork to cool down and dry out a little, then strip the meat from the bones, being careful to discard any cartilage, small bones or fragments, and excess fat.  You'll probably now see why I told you to remove as much fat as possible.  This is a greasy joint, and the cooled, congealed fat is grim. 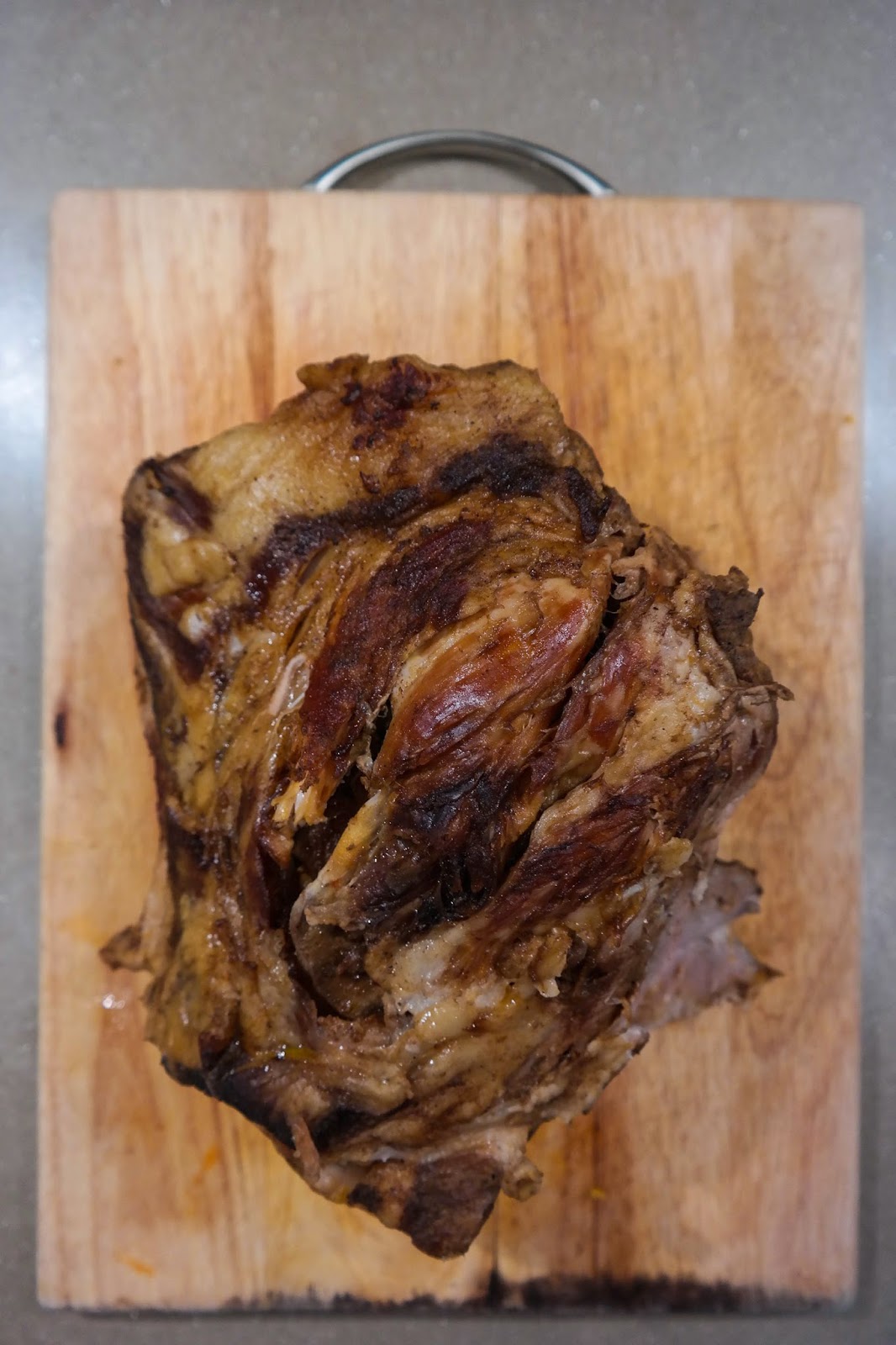 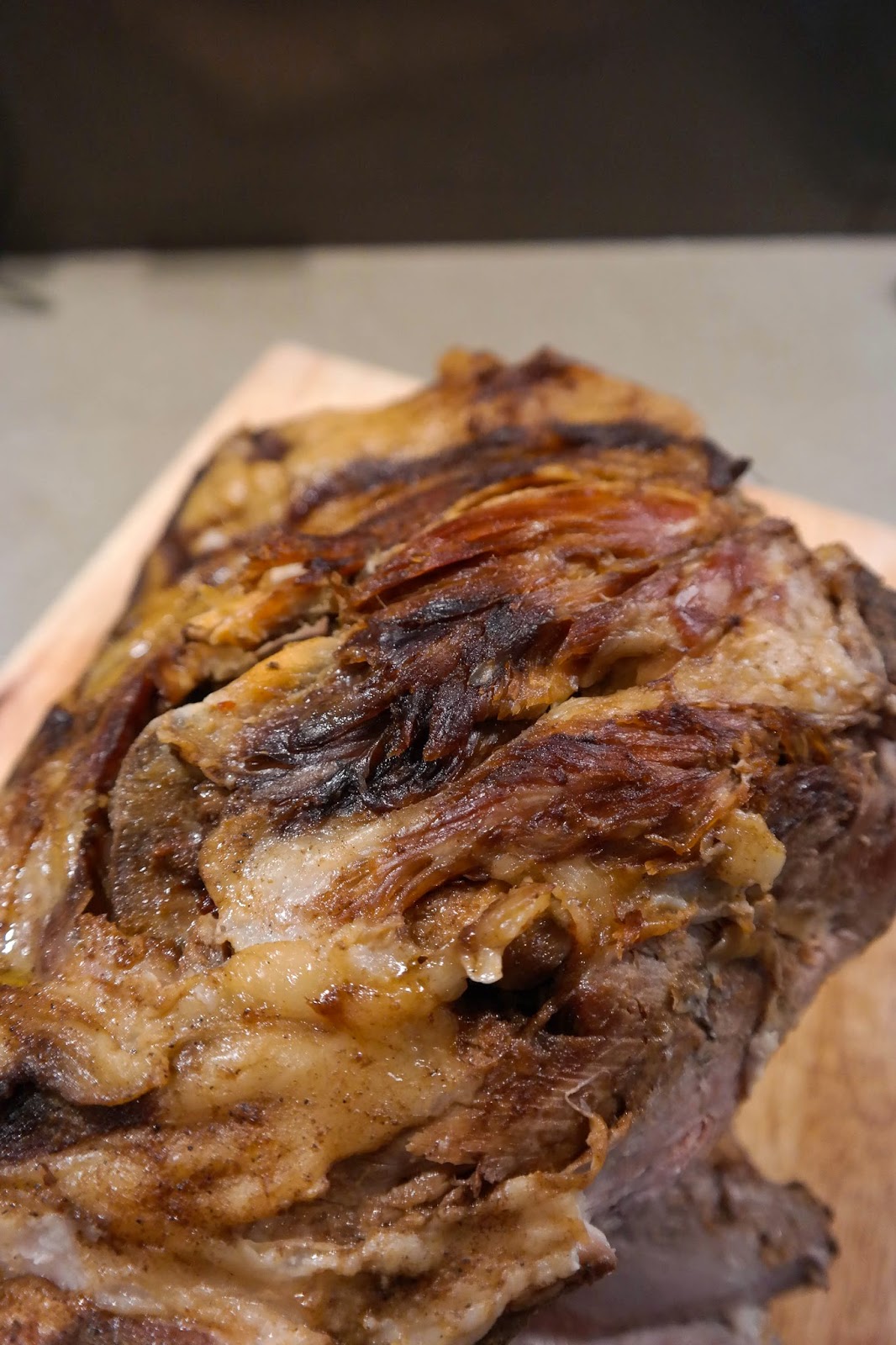 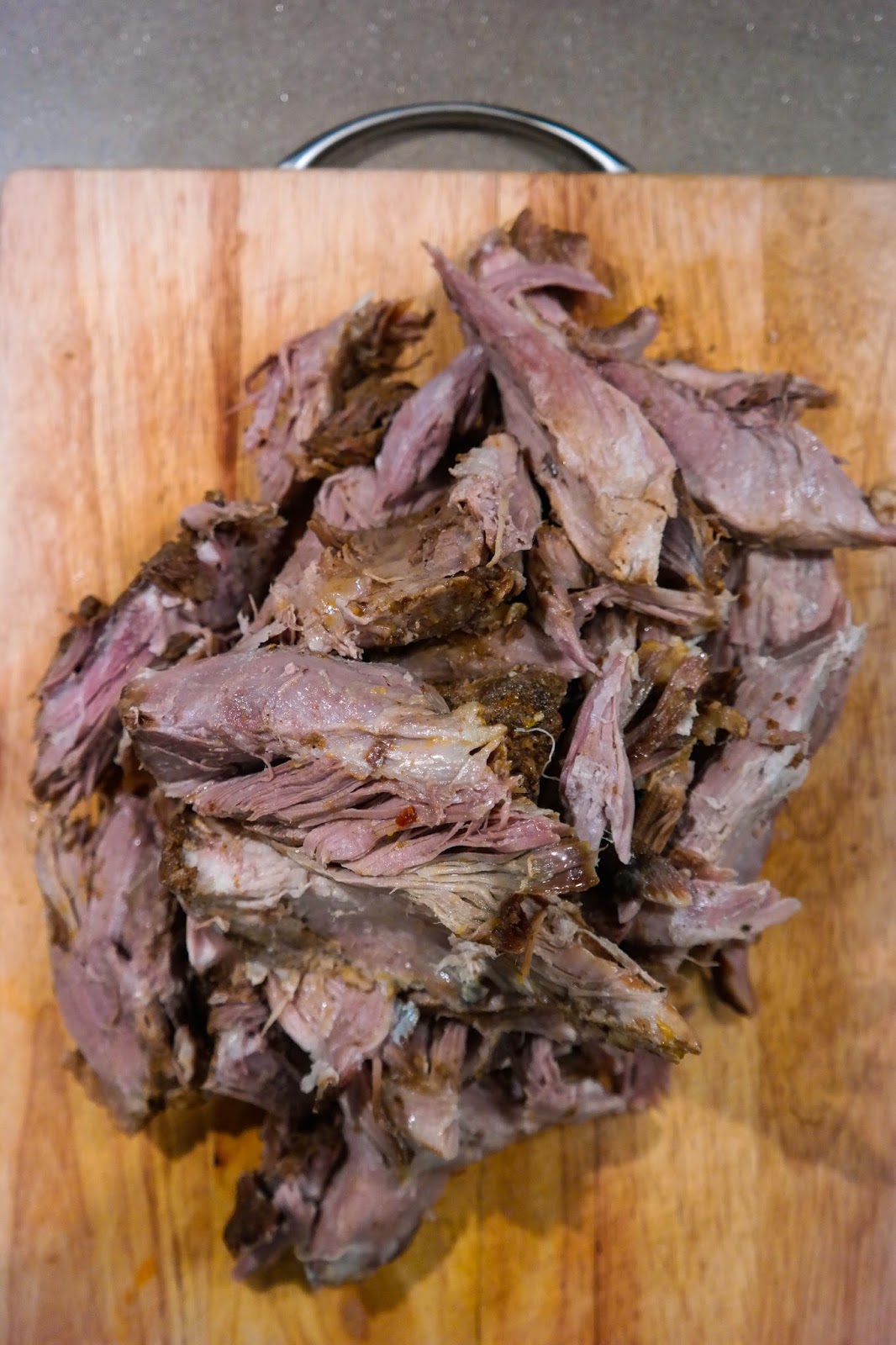 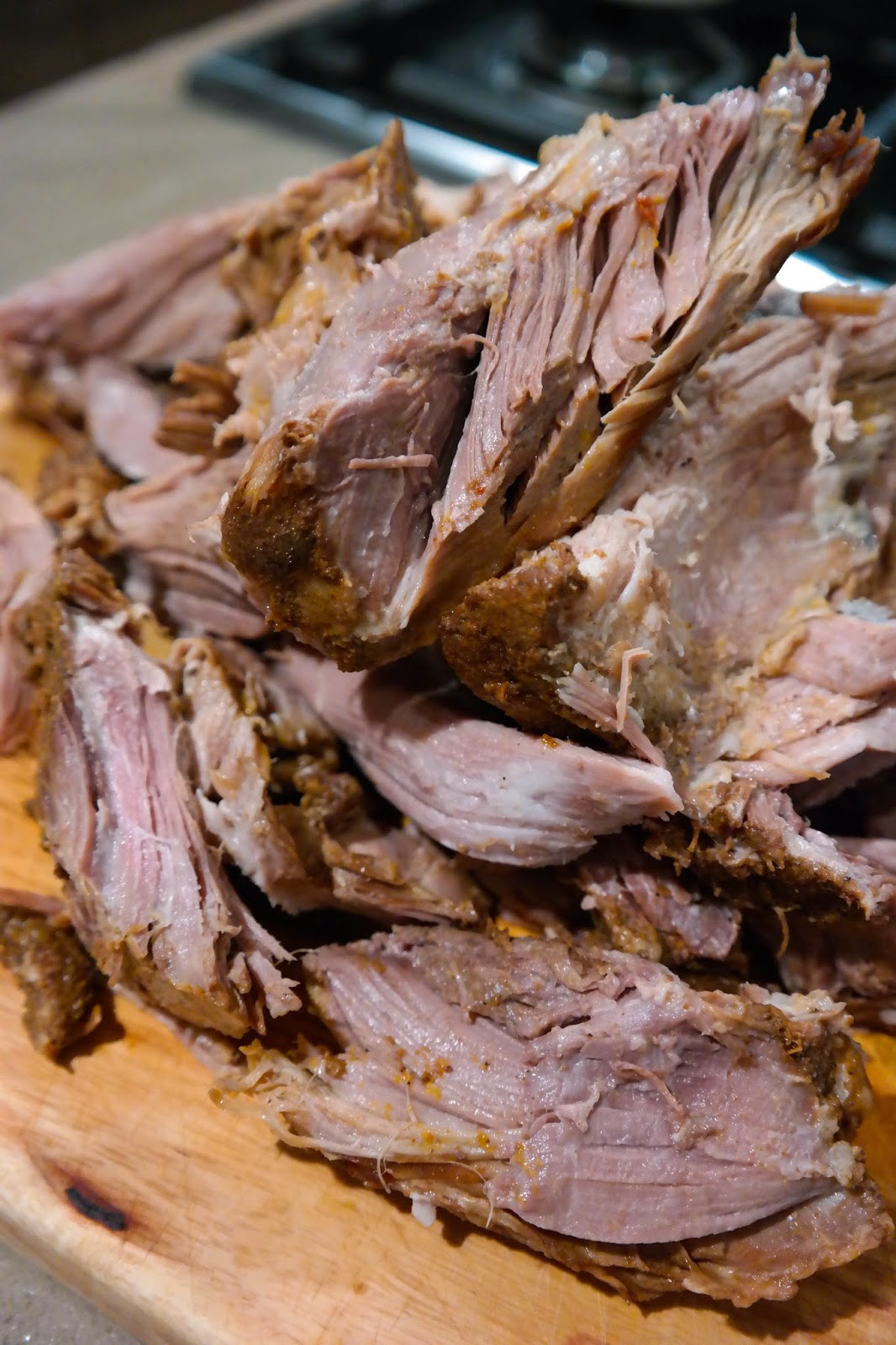 Shred, or 'pull', the pork to the kind of size you want to be eating it. 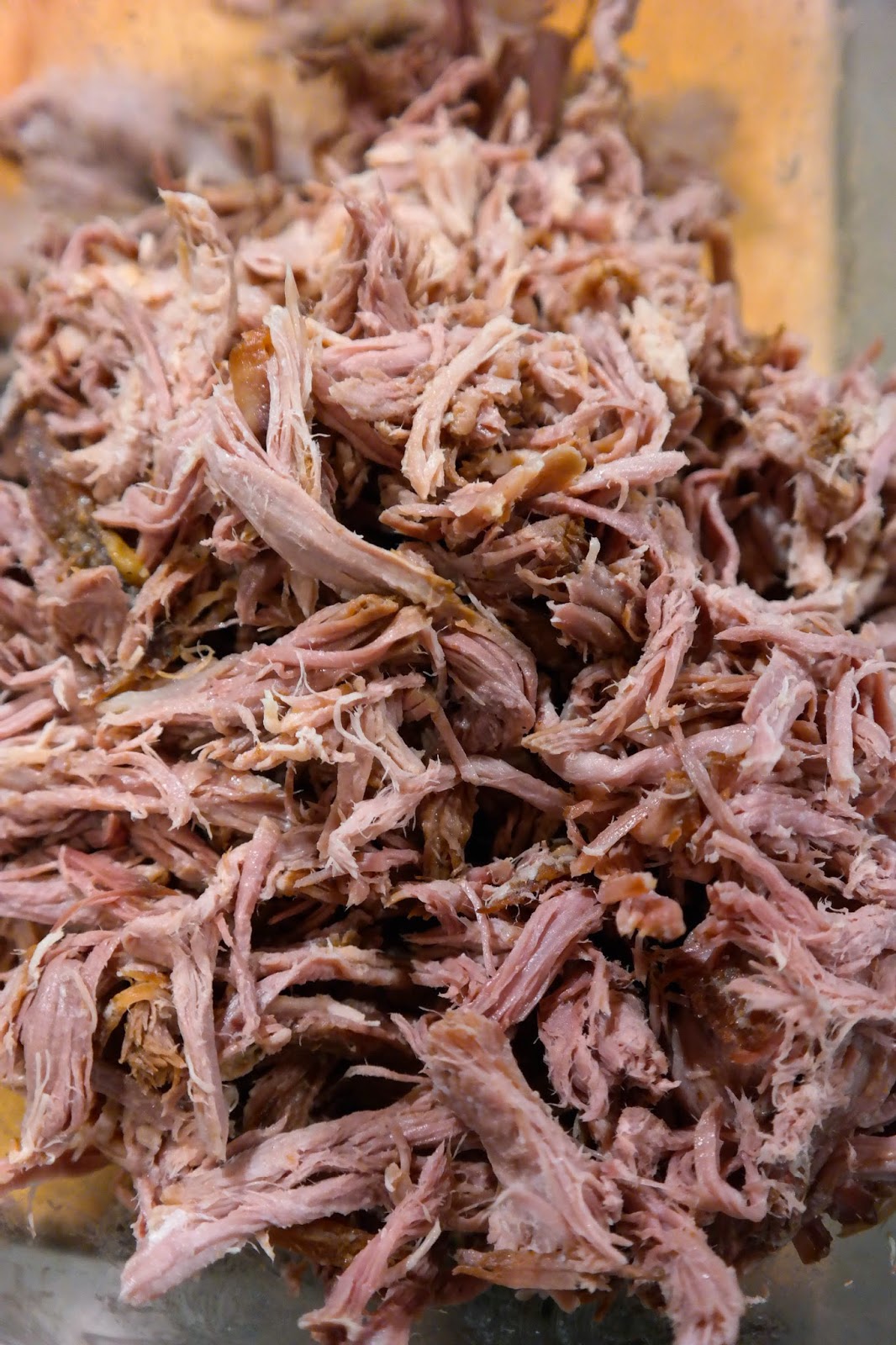 6. Cool the cooking liquid, ideally overnight, or at least a couple of hours, in the fridge.  You'll see a lot of the fat rises up to the top and solidifies.  Skim this off.  Then reintroduce it to the pan, add the lemon juice, and reduce by one third / half.

7. To serve, douse the pulled pork in the reduced cooking liquid then stick it in a soft bun with loads of BBQ sauce and some pickles in you have to hand.  Wolf down. 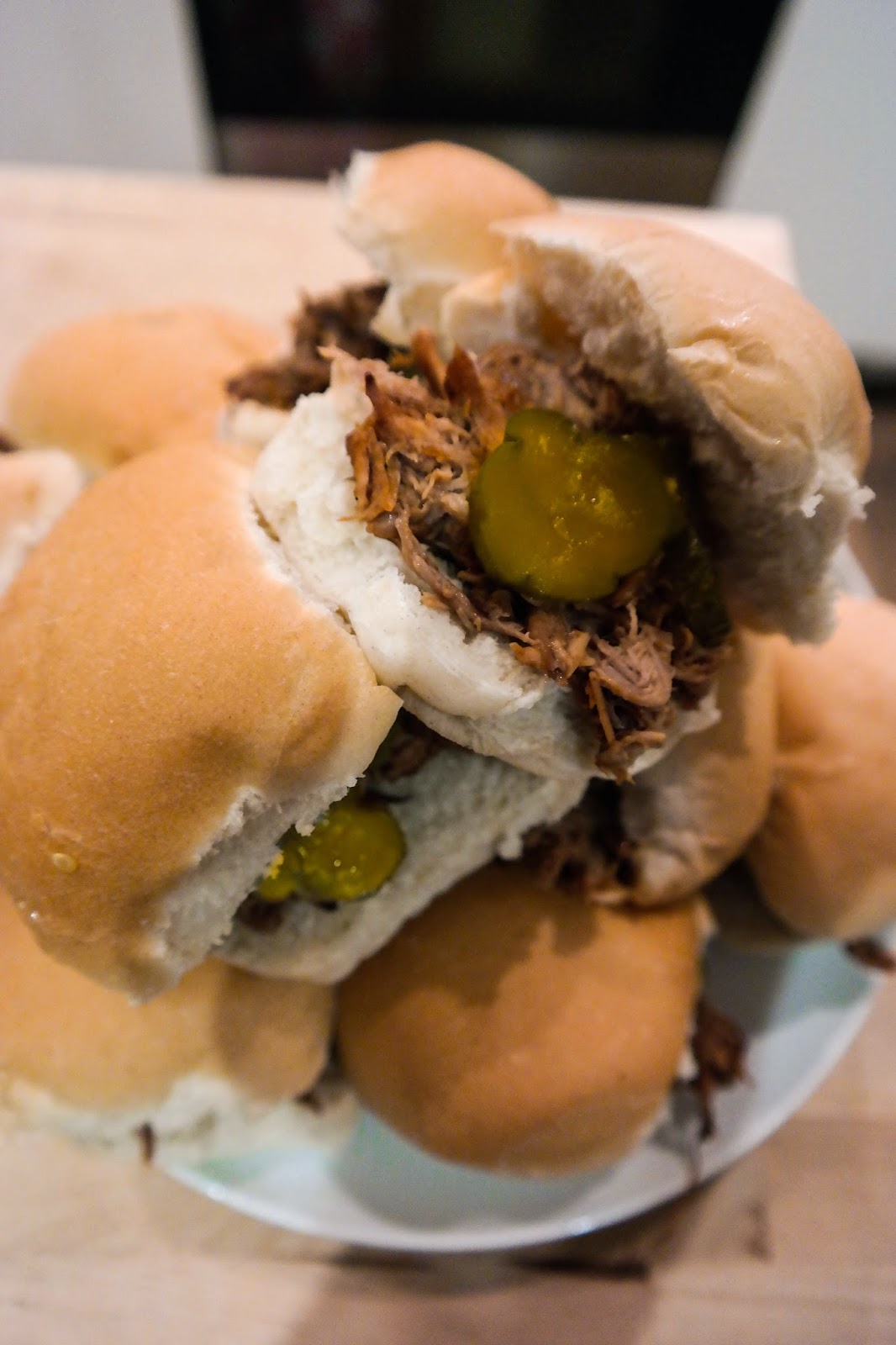 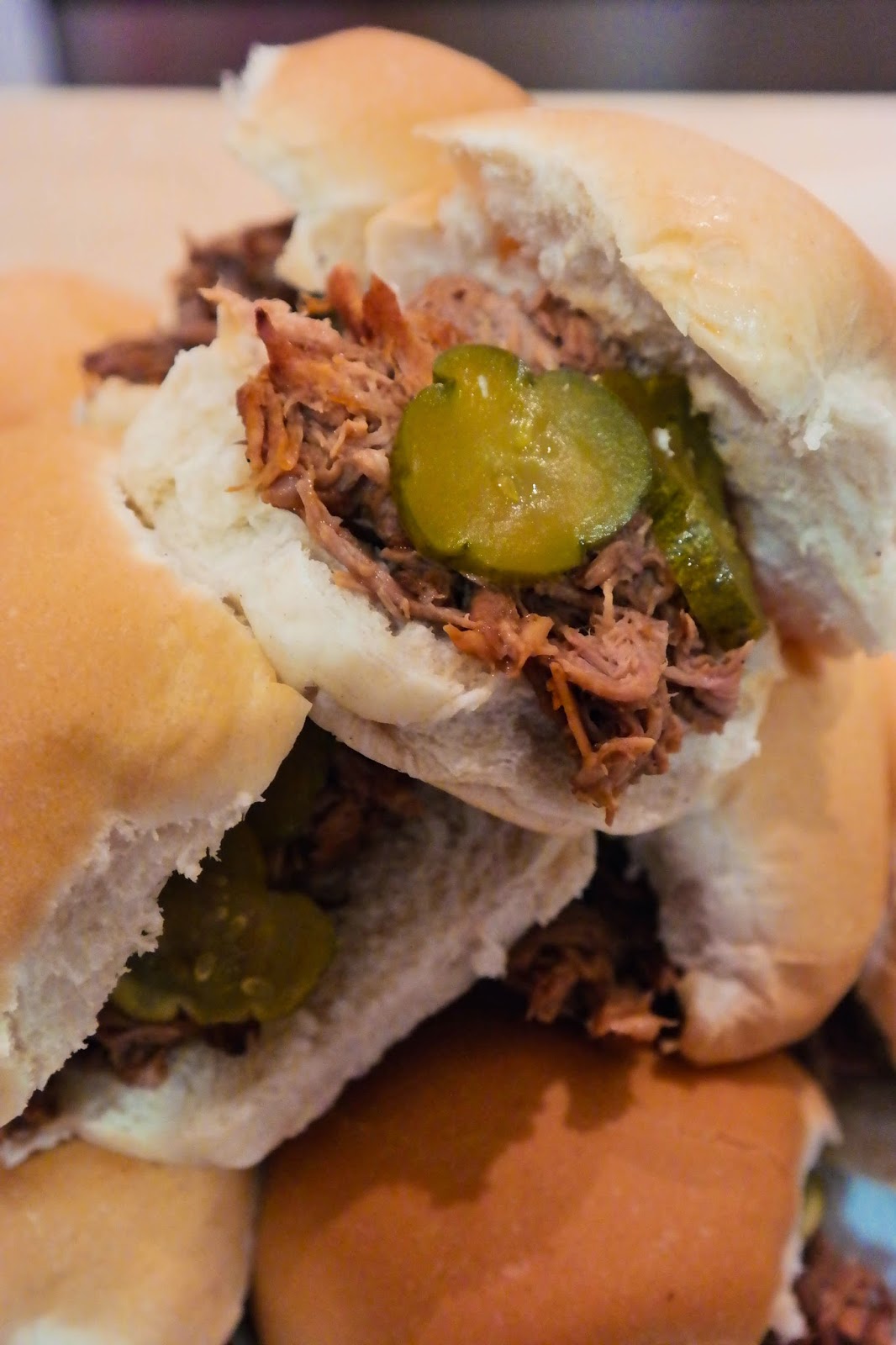