Living so close to Brixton Village, you'd think I'd be in and out of there all the time.  Oh, if only that were the way.
It's home to so, so much that is wonderful in the way of food.  Several outlets have started there and branched out to other joints, amongst the most notable of which is Honest Burgers.  Frequently being named as the best burger in London, I felt that I just had to give it a try.
It didn’t disappoint.
Let's start at the beginning.  The burger itself, the most important part, was juicy and rich, being cooked to absolute perfection.   I went for the Honest Burgers – I feel it's always a good plan to go for the flagship product – which was the standard beef burger with the addition of cheddar cheese and bacon. What makes this more honest than any other cheese and bacon burger, I don’t know, but hell, I aint complaining. Oh, and there's red onion relish in there too. 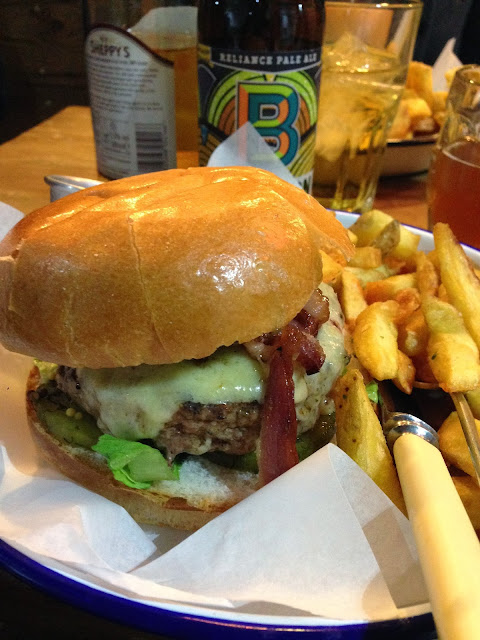 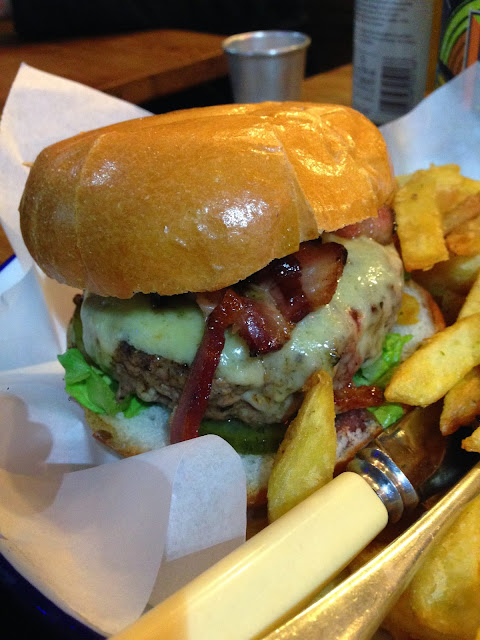 Nothing makes me more cross than the burger peddler who tells you he/she can't cook it any less than medium. That only says at least one, and probably both, of two things to me: (a) your burgers are frozen before cooking; and (b) you're not a confident enough chef to know where your food comes from. A grizzly, brown burger is not a thing to be enjoyed. A hot, pink, juicy burger is. Given the amount of blood, sorry, gravy, flowing from this, I think you can guess which one this was. 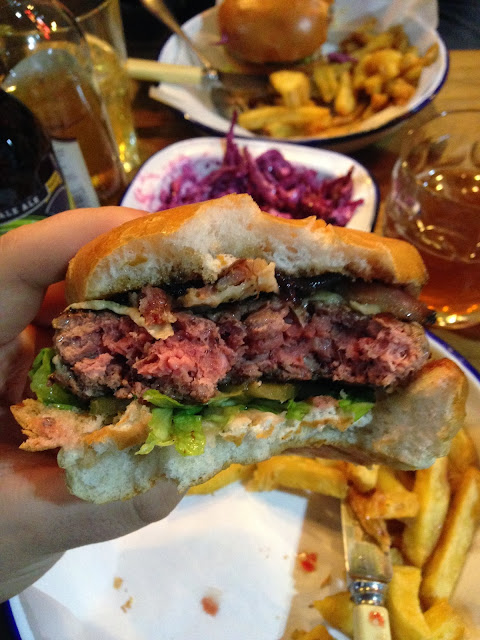 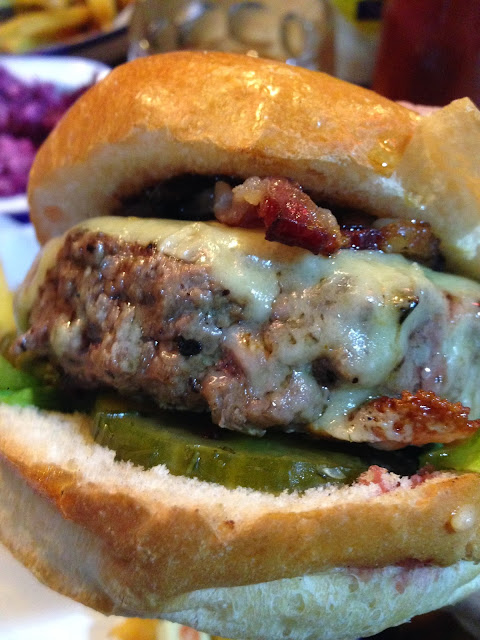 Then on to the fries.  Again, good.  Thin enough to be crunchy – I'm no fan of the honest thick British chip with a burger, give me a French fry any day – but not so thin as to be nothing but crunch. They're seasoned with rosemary salt as well, which is a nice touch – albeit one that leaves them a little bit too reminiscent of roast tatties than burger fries for my liking.
Also, and sadly ordered separately (and much, much too small a helping for the one quid required), was the mind-blowingly good chipotle mayo.  I love a bit of chipotle, but most of the time you have something like this it's either witheringly hot or lost all of its smokiness.  Neither was  the case here, a real victory of condiments. 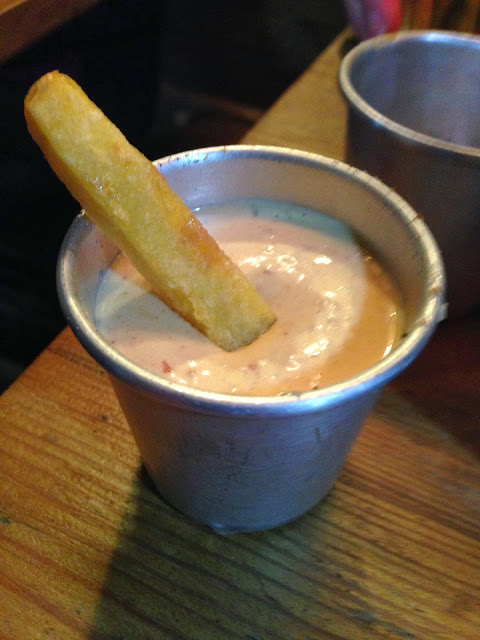 Also on the side we had the beetroot and apple slaw.  I love slaw.  I love it with American food – mostly because the clean, fresh tastes break through all the rich, fatty foods.  The Yanks are on to a good thing with slaw and burgers / BBQ, and Honest Burgers are onto a good thing with their version.  This one is sweet and tangy, light and creamy, and somehow the perfect foil to the fatty patty and fries. 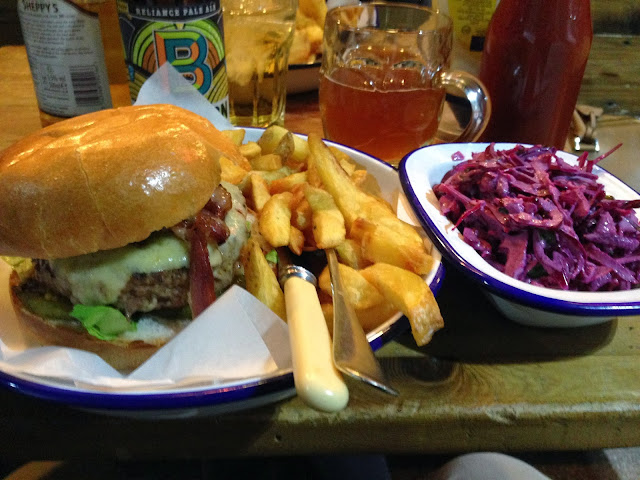 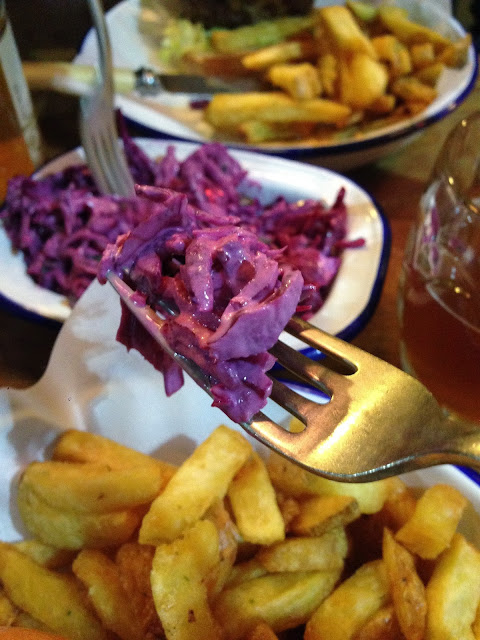 All washed down with Brixton's finest brew: Reliance Pale Ale from Brixton Brewery.  A brilliant drop and (like so many of its craft beer companions) ultra-hoppy, with all those fruit and flowery aromas, which really offsets friend food magnificently. 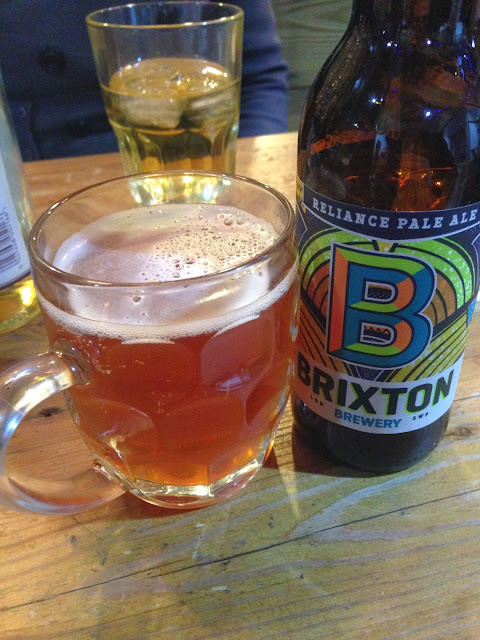 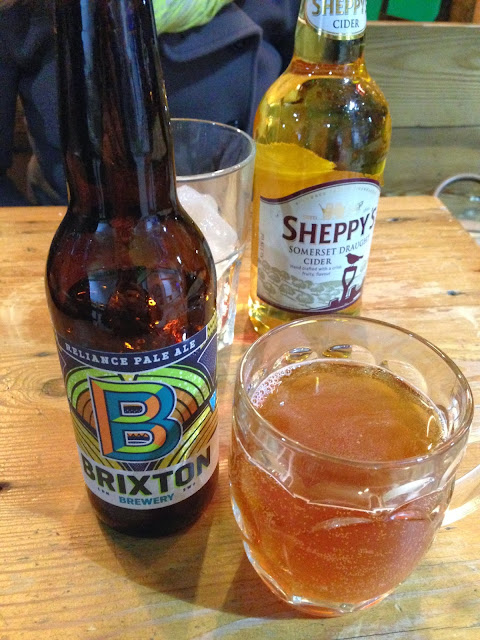 Just a quick word about the setting too: It's magical.  If you haven’t been down to Brixton Market / Village yet, go.  Sure, it's all getting a little trendy, a little Shoreditch, but it's still wicked. 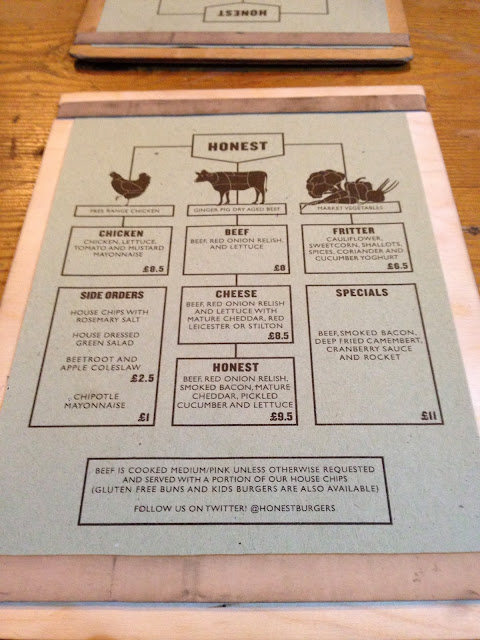