This is spun off the River Café Cookbook, with really very little adaptation (more tweaks) so all credit to them.  I did reduce the amount of butter, as what was recommended really was a bit criminal.  I also decided to char the squash (not pumpkin) because it adds a wonderfully rich, caramelised kick to the dish.

Serves 6.  It's very rich, so there's no need to dole out huge portions. 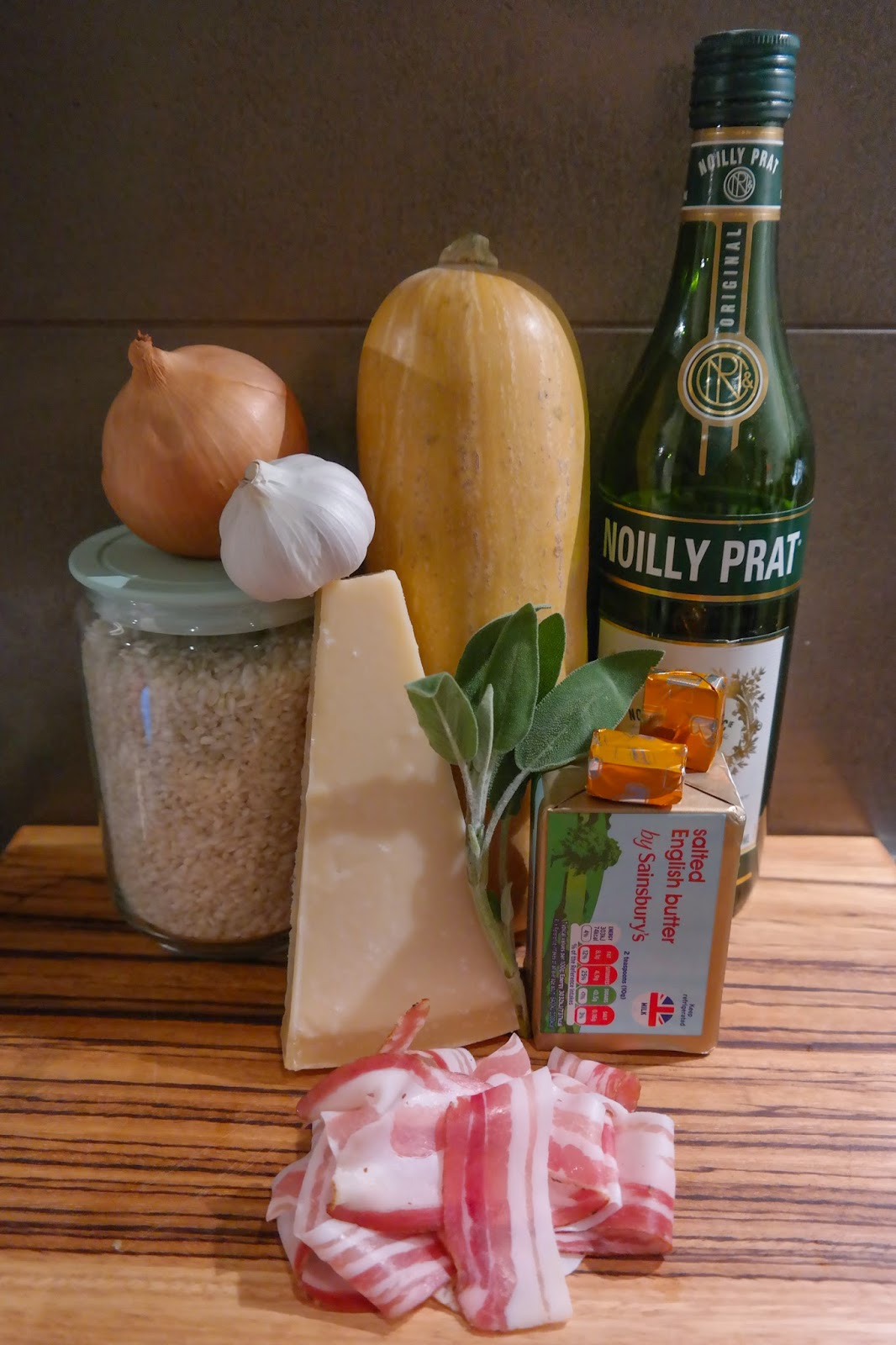 Pre-heat the oven to 220ºC.  First you have to prep the squash / pumpkin.  Peel it and cut it into large-ish chunks.  Toss it into a roasting dish and add four cloves of garlic - unpeeled but cracked with the back of a knife.  Drizzle over plenty of olive oil and toss together before sticking it in the oven. 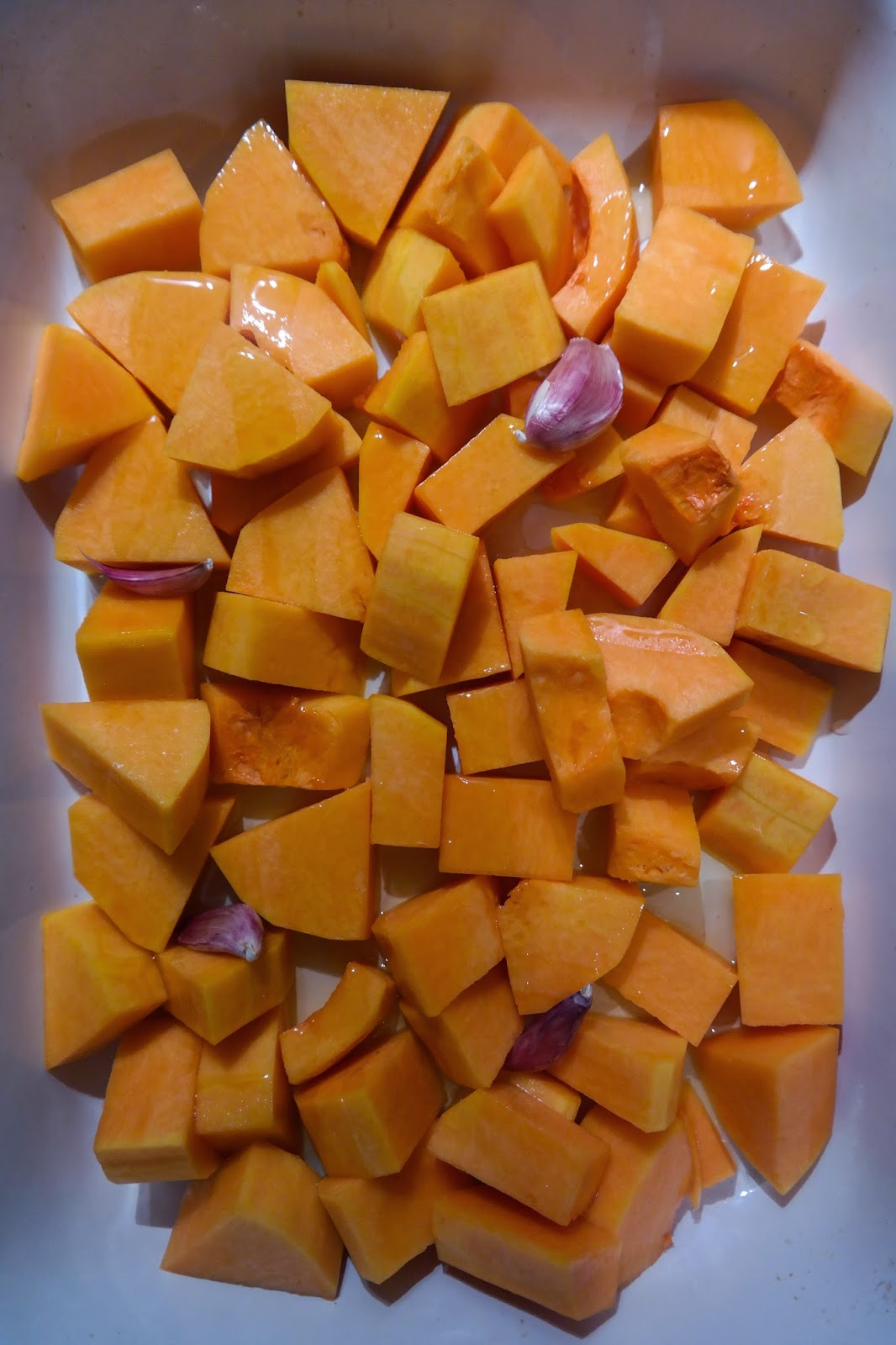 Remove and toss the squash every so often, keeping an eye on it.  After about 30 minutes the garlic will be soft through and should be removed (otherwise they'll go crispy and solid, which is useless).  Scrape the soft, roasted garlic out of their skins and add it to the squash when it comes out of the oven. 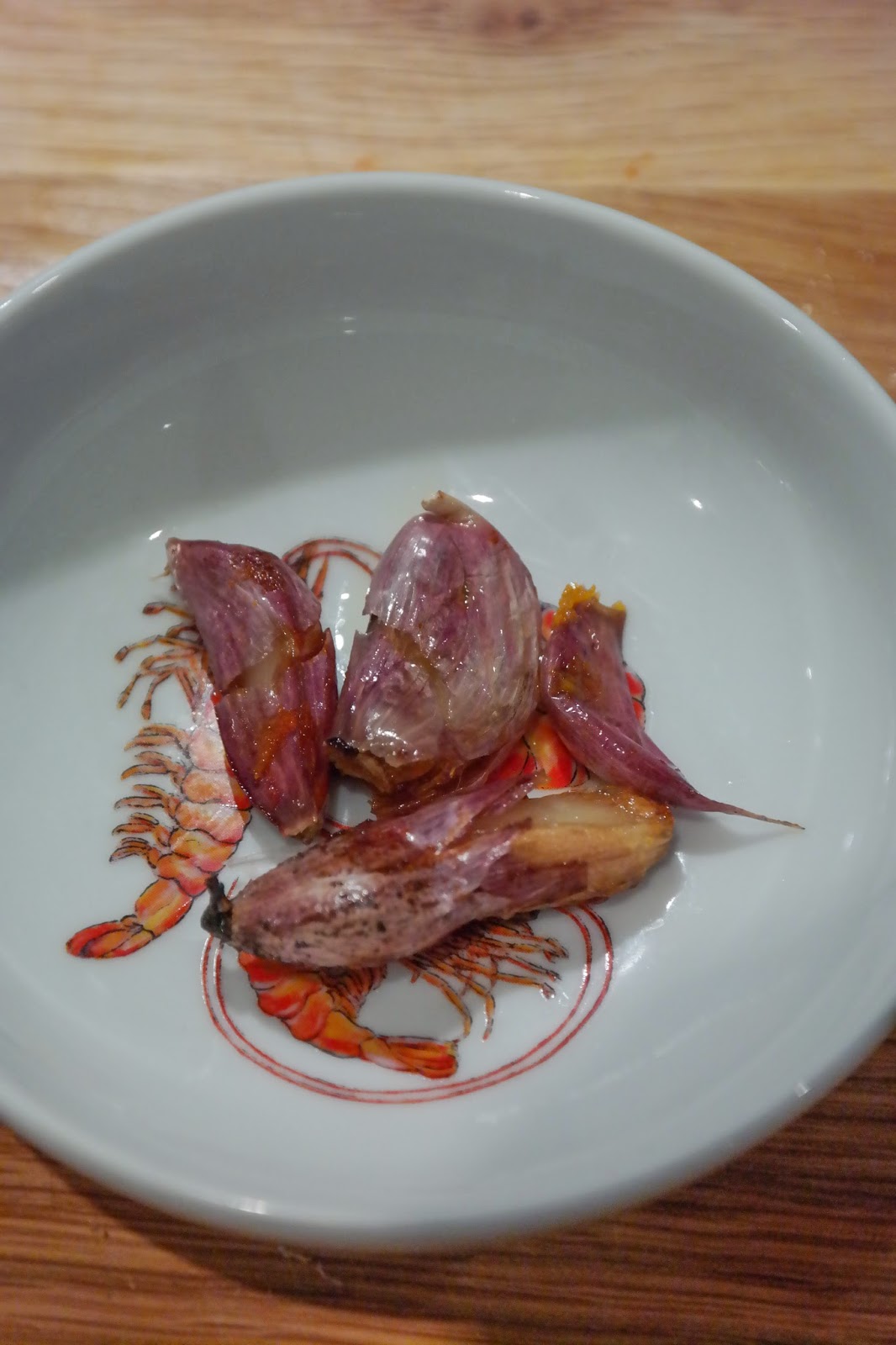 The squash will need the best part of an hour in total and you want to keep cooking it until its properly charring.  No, this wasn't an accident – just go for it. 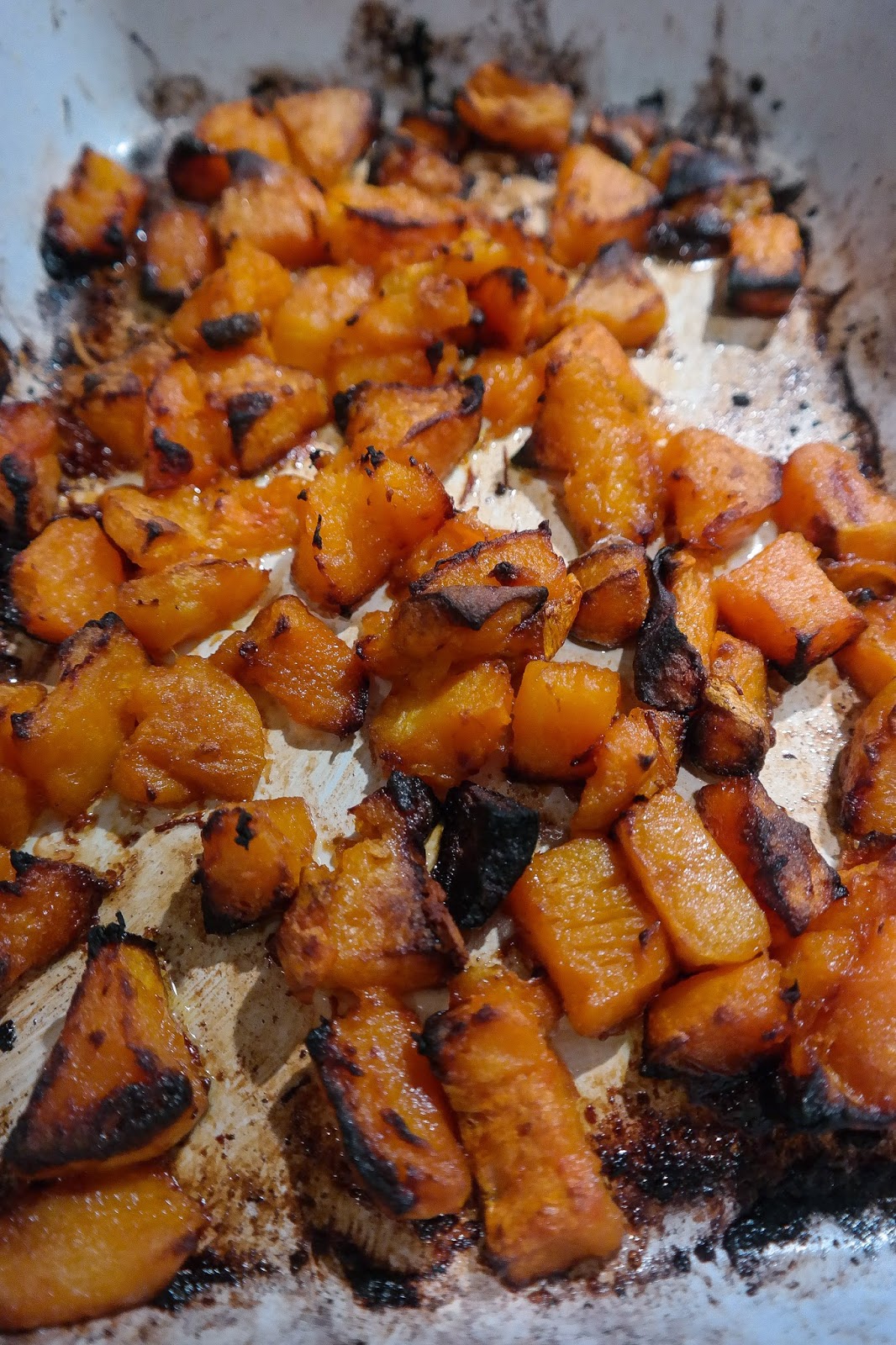 Next up, you need to make a basic risotto.  Jamie has a fabulous version in his book Cook.  This is a take off of that and is very similar to the River Café version (hardly surprising since Jamie trained there).

Pour a couple of tablespoons of olive oil into a big, deep pan (I actually used my trusty Le Creuset, so tired I was of making this in big frying pans and spilling half of it down the side) and add 75g of the butter.  When the butter is melted, add the onions and, over a low heat, soften them.  As soon as they go in, peel and chop the garlic as finely as you possibly can before adding that as well – you want to do this now (i.e. after the onion has gone in) otherwise it may burn.

When the onion is properly soft, add the rice and stir so that it is coated in the butter and oil. 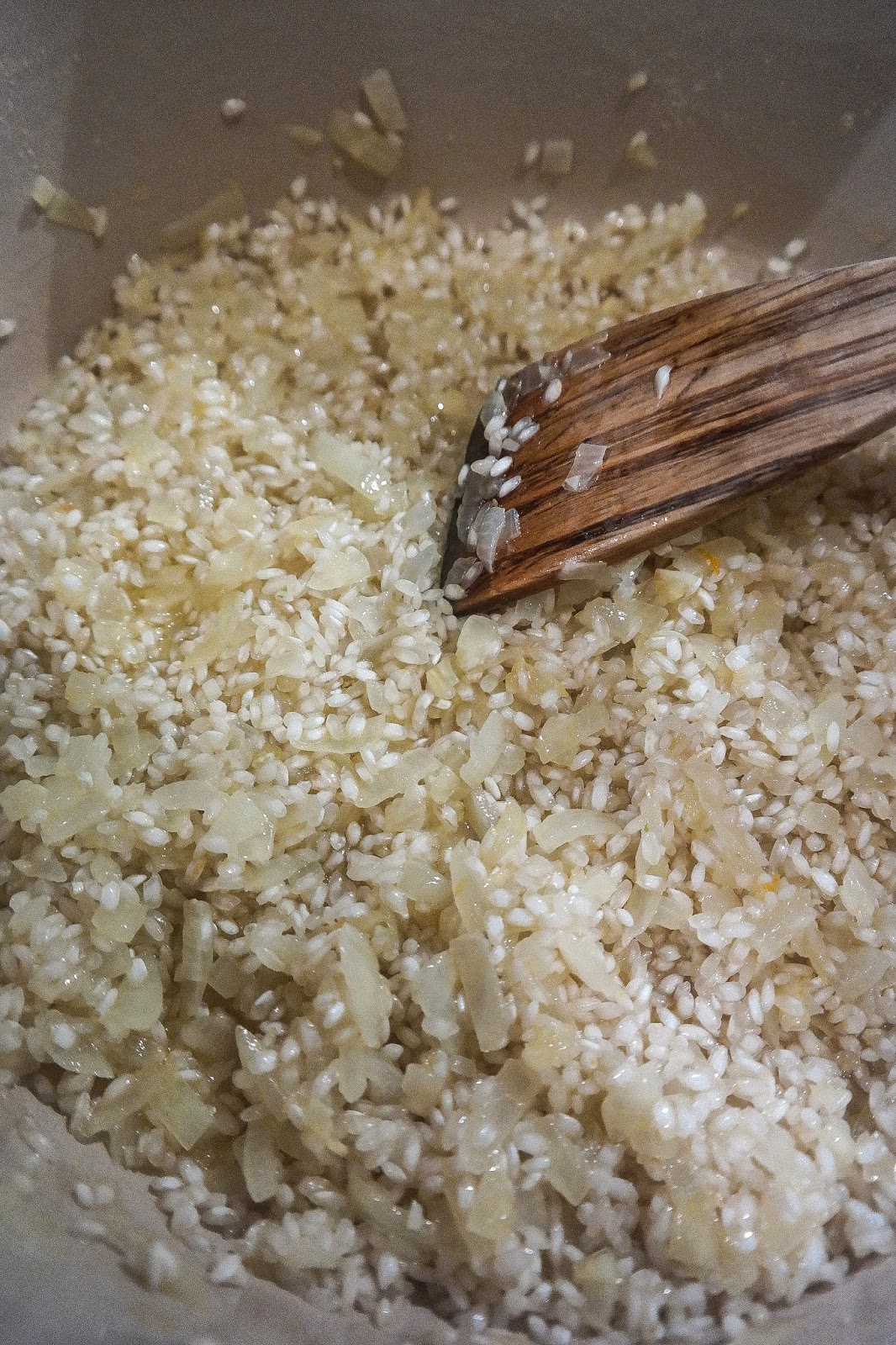 Now add a couple of ladles of hot stock, stirring constantly until it has absorbed most of the liquid.  Repeat until the rice is cooked – if you need a bit more wet, use boiling water from the kettle; equally, you may not use all the stock before the rice is cooked, so keep tasting after the first litre or so.  You will be left with a very creamy but plain risotto. 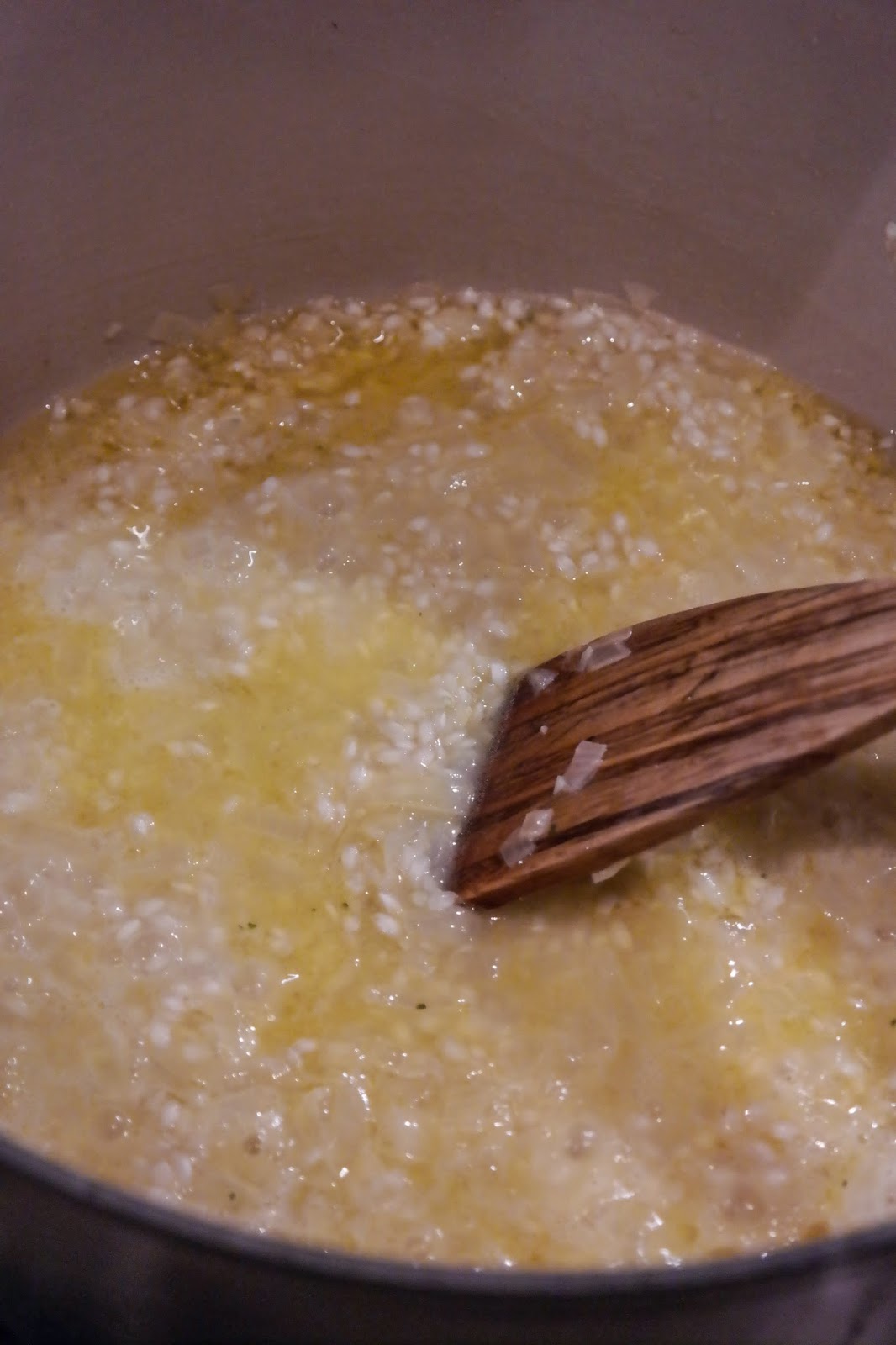 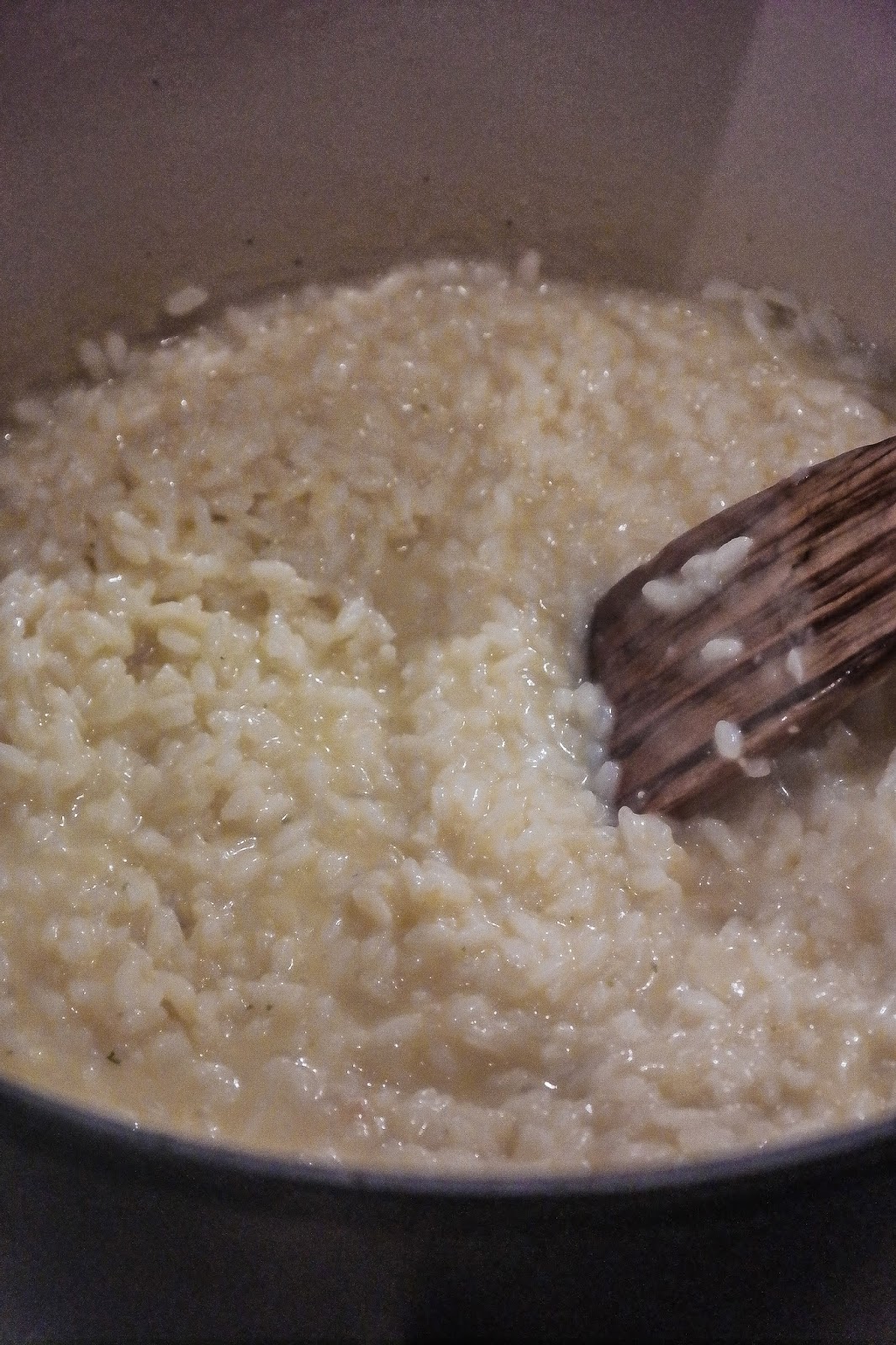 Whilst this is going on, fry the pancetta until crispy in a frying pan in the side.  This will only take a couple of minutes, so keep an eye on it.  Remove and place on kitchen paper to catch the extraneous grease.  In the rendered pancetta fat, fry the sage leaves. 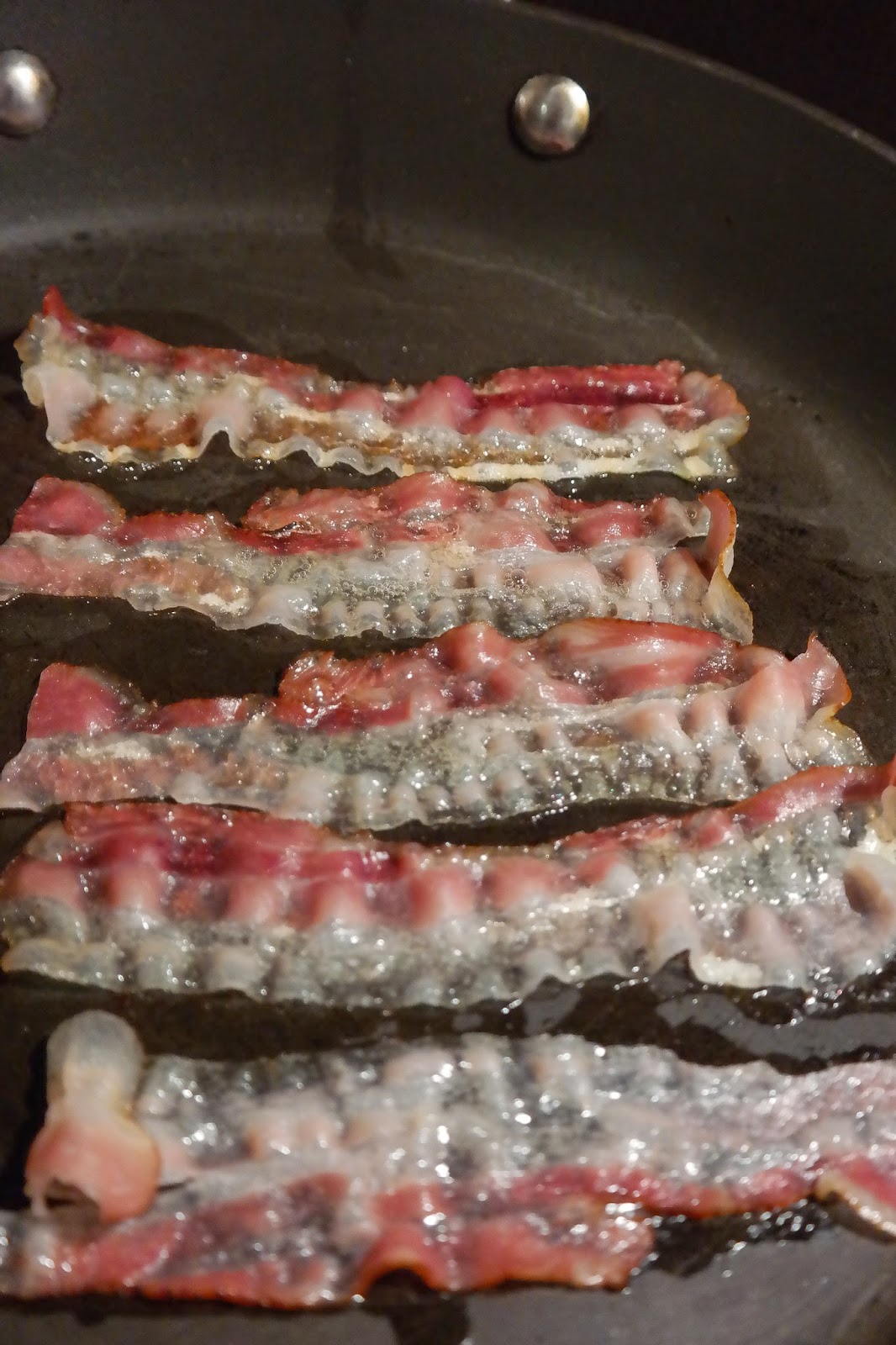 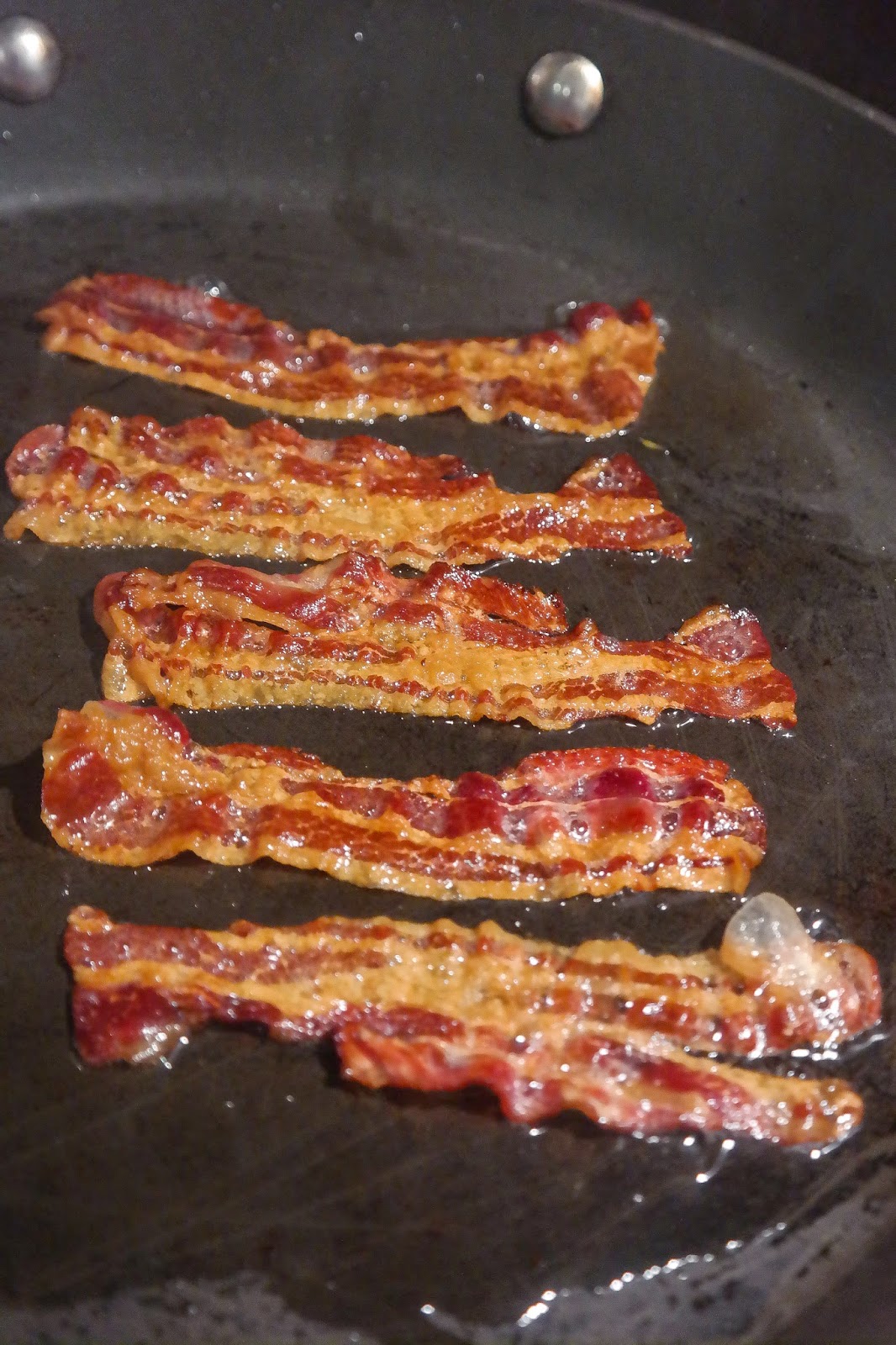 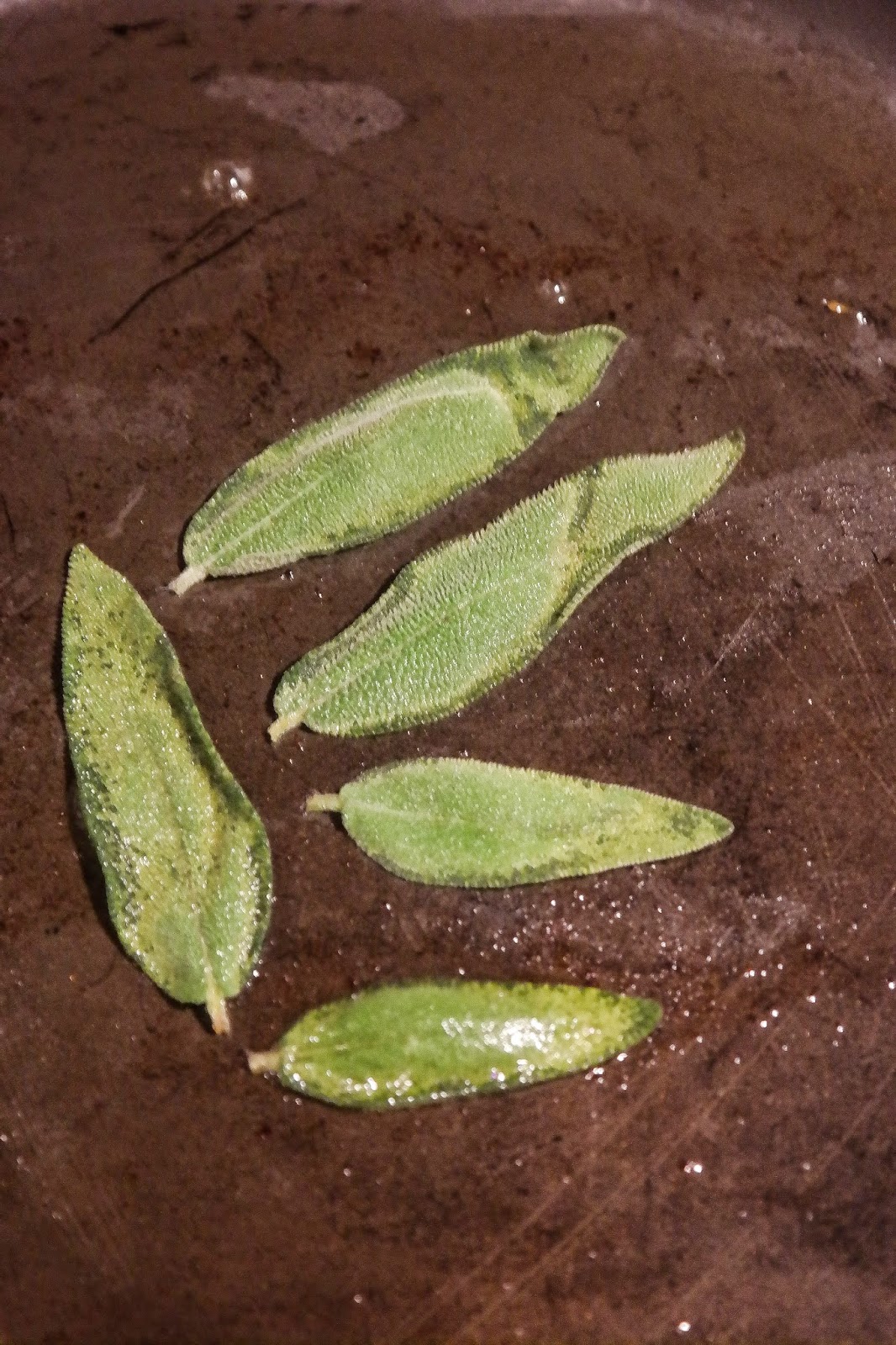 Honestly, I think the pancetta is essential – it really adds something to the dish.  I don’t think that the same can be said for the sage leaves.  I think they look pretty, but don’t add too much.  Both were my additions (although the fried sage idea is from my cousin's wife, Average Baker, who uses it to great effect on other stuff) so I'm claiming a 50% success rate.

When the risotto is ready, tip all of the squash in and add the parmesan, the remaining butter (cubed) and the vermouth.  Stir thoroughly, so that the squash (which will be very soft) is thoroughly combined with the rice.  Serve immediately, with the pancetta and sage (if used) on top, together with a scattering of freshly grated parmesan. 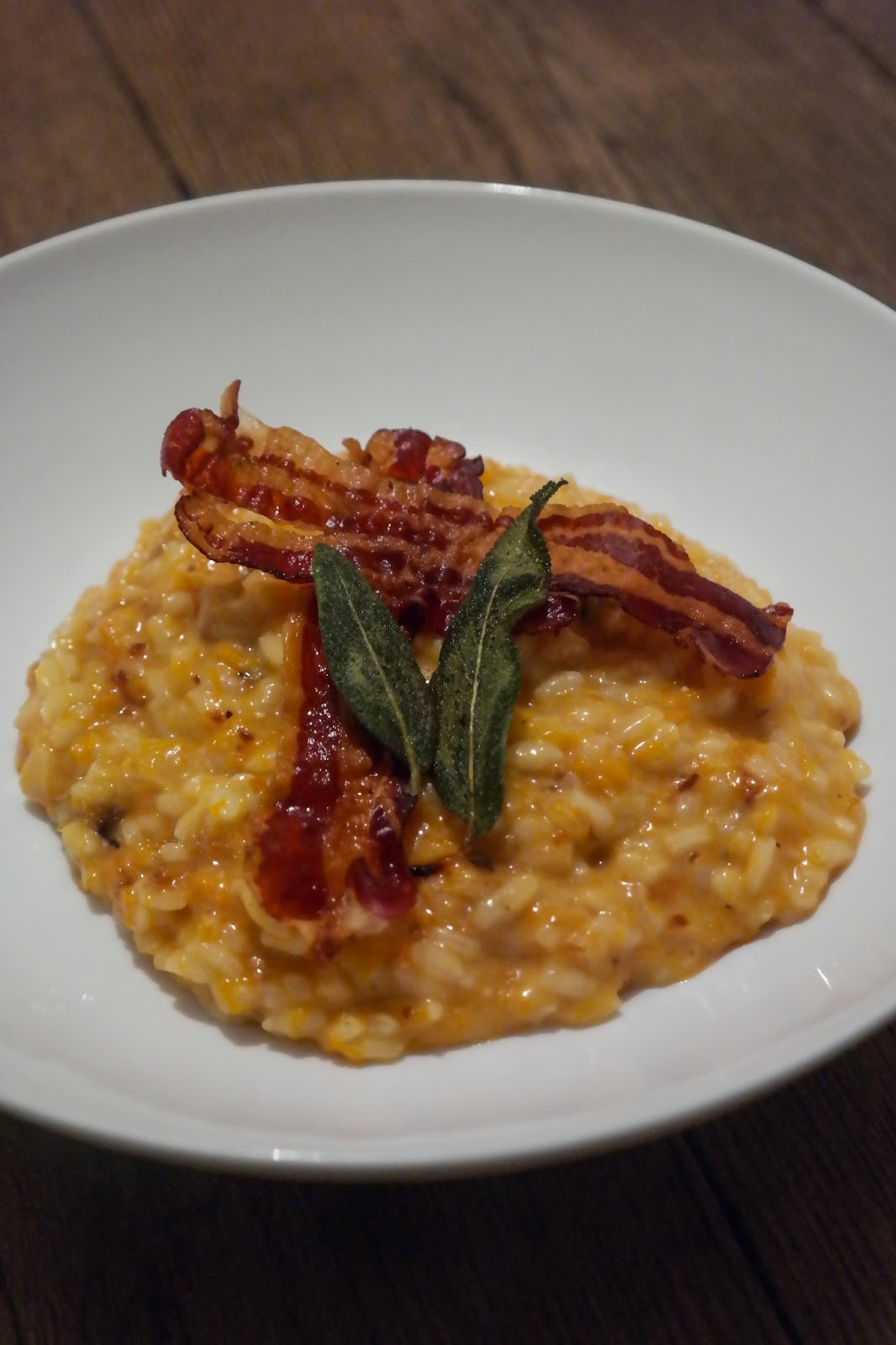