The Cocktail Trading Co. is not easy to find.  Ostensibly, its address at 22 Great Marlborough Street leads to a small residential flat (who knew that actual people actually lived around there?!).  Instead, you have to pop into the bar next door (Central & Co) and head directly downstairs into a tiny wee bar hidden away in the basement. 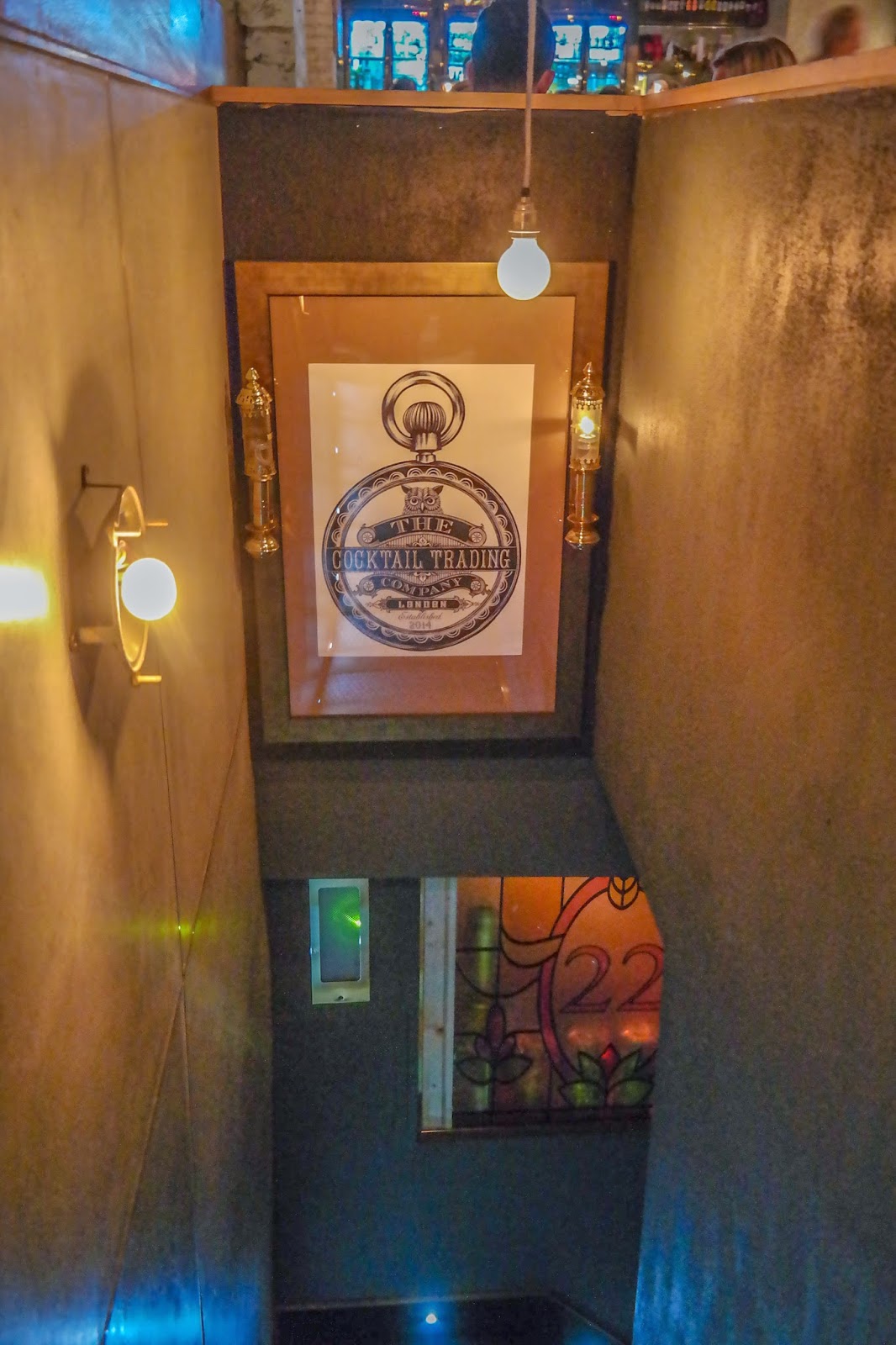 Like so many other new and trendy joints, The once inside the Cocktail Trading Co. it's cramped, loud and extremely busy.  But none of that seems to be problem - unlike most other basement-based cocktail bars, The Cocktail Trading Co. seem to have managed to make their diminutive little piece of overpriced London real estate feel homely rather than an attempt to crowbar as many covers into the place as possible in the hope that you can sell enough booze to break even.  The feel of the place is almost 70s pub / working men's club chic.  With old records on the wall (I was squeezed in next to a rare Pink Floyd album, something a little vexing as I reckon they should have been playing it rather than displaying it), pint mugs of free monkey nuts and little lampshades on the tables, the place felt genuinely vintage, rather than the more common Hoxton pastiche.  There was even this little piece of 'bar history', for interest: 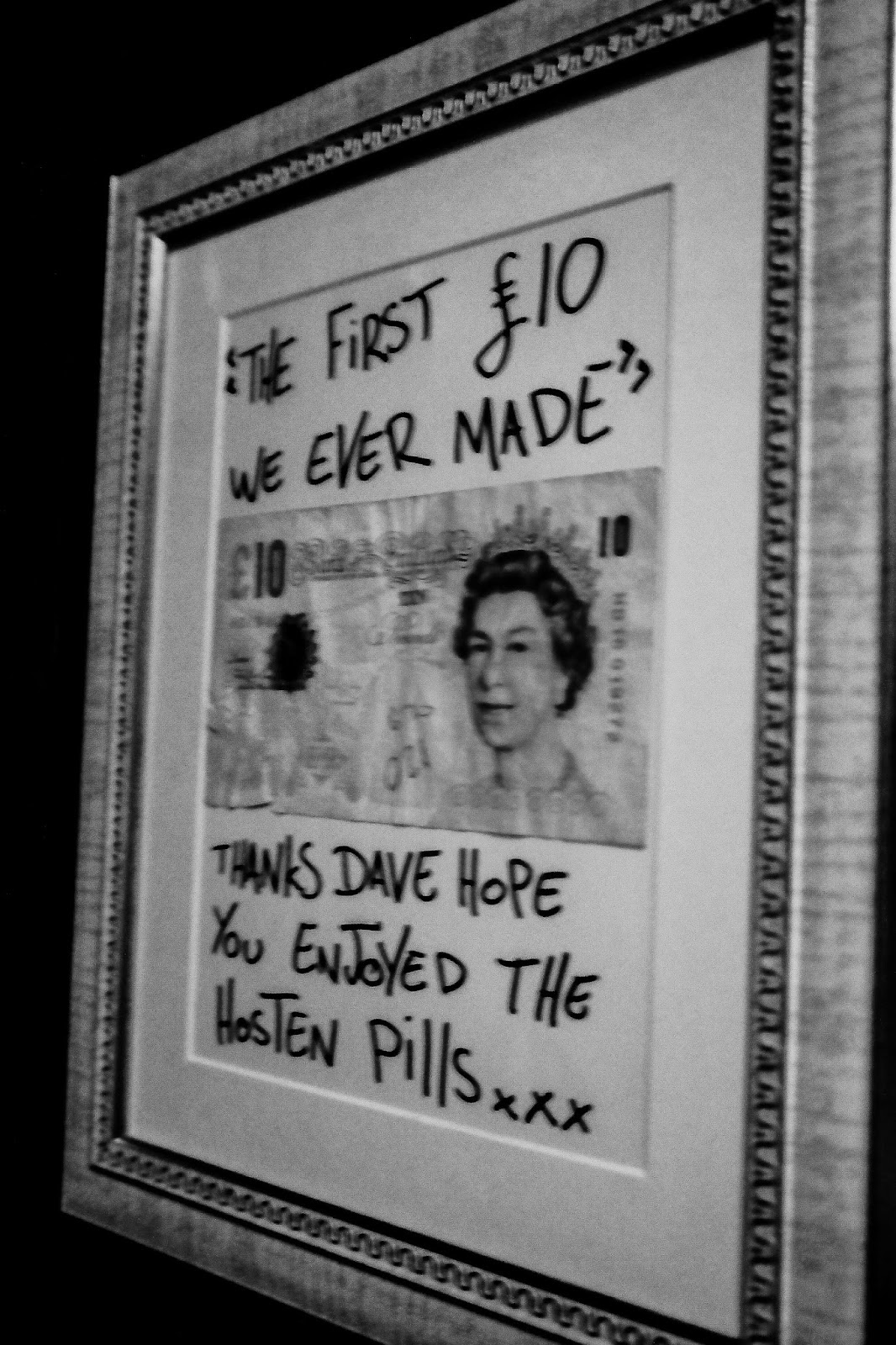 Then there were the drinks, each of which can be ordered from a cute little A7-sized cocktail book (complete with a crossword in the back, just in case your friends are dull).  These were sensational.  One can choose to go for run-of-the-mill drinks (e.g. bellinis, mojitos, daiquiris). I am afraid eschewed this option in favour of the more exotic, creative concoctions – this is, after all, a "Development Bar".

GrubsterGirl's first choice was the Scout's Honour, a mix of tequila (her favourite), lime juice and smoked marshmallow syrup.  So a sort of re-take on the classic margarita. (By the way, did I mention it was dark?  It was dark.  So the pictures are all a little... grainy.  Sozza, nothing to be done about that.) 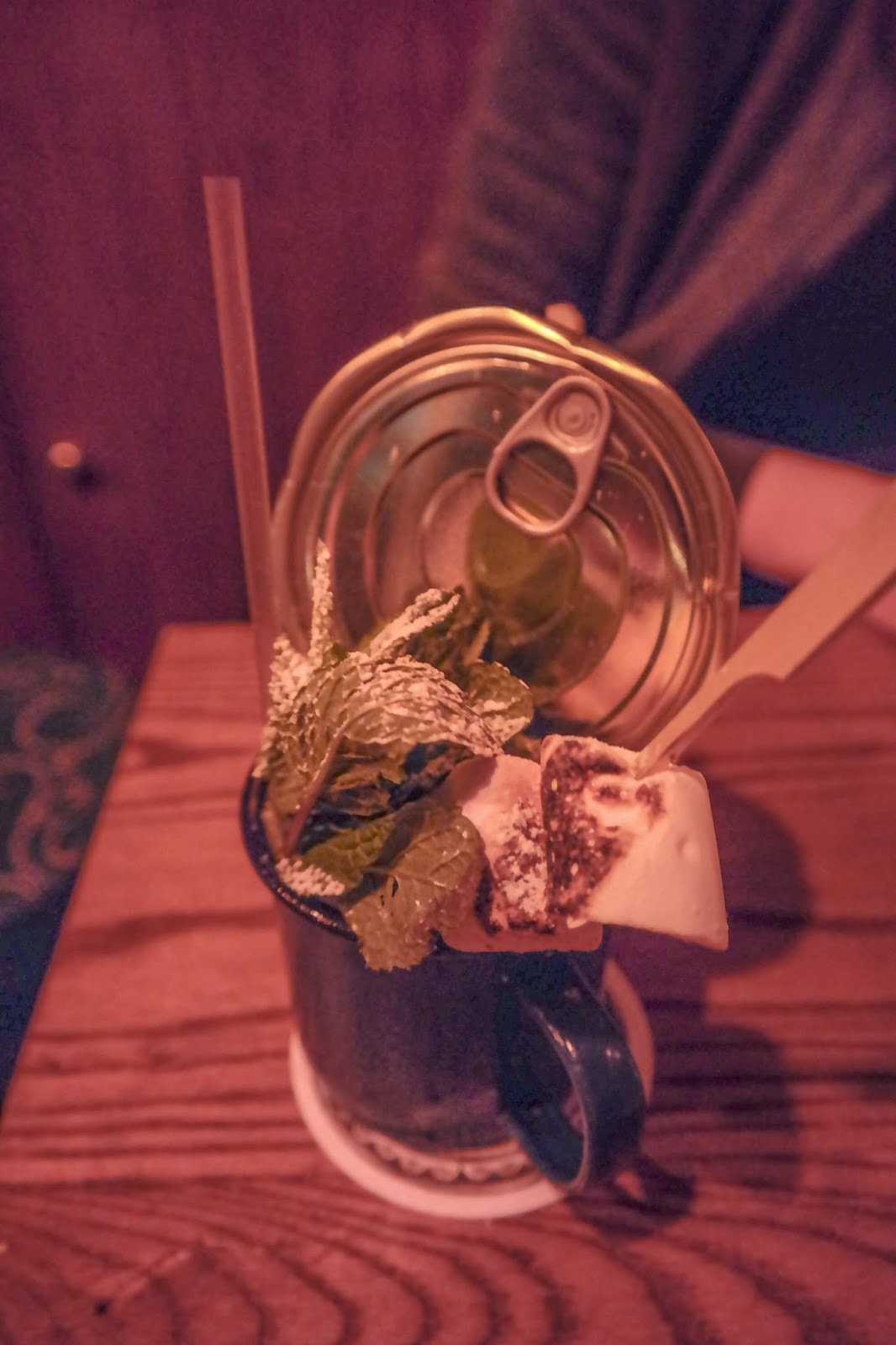 Let's start with the presentation, because this is clearly a big thing for these guys.  It's called "Scout's Honour".  So it comes in a tin cup.  With a tin of spam.  And a couple of flame toasted marshmallows (presumably broiled over the camp fire) as a snack.  Pretty damn impressive, no doubt.

The drink itself was pretty good: boozy and smoky, with all the taste of the toasted marshmallow syrup coming through – a good thing, I assure you.  The mint garnish was a bit out of place though, and tended to jar with the more Mexican / margarita flavours of the main attraction.

I opted for the 欢迎到肯塔基州 (trans. Welcome to Kentucky, Have A Nice Day (apparently, although Google Translate thinks otherwise... not that I care, to be honest)).  Described as "the perfect fusion between east and west", this drop mixes bourbon, 'ginger & plum infusion' (whatever that is), yuzu juice (a tart, citrus fruit somewhere in flavour between s grapefruit and a mandarin) and matcha tea (ground green tea). 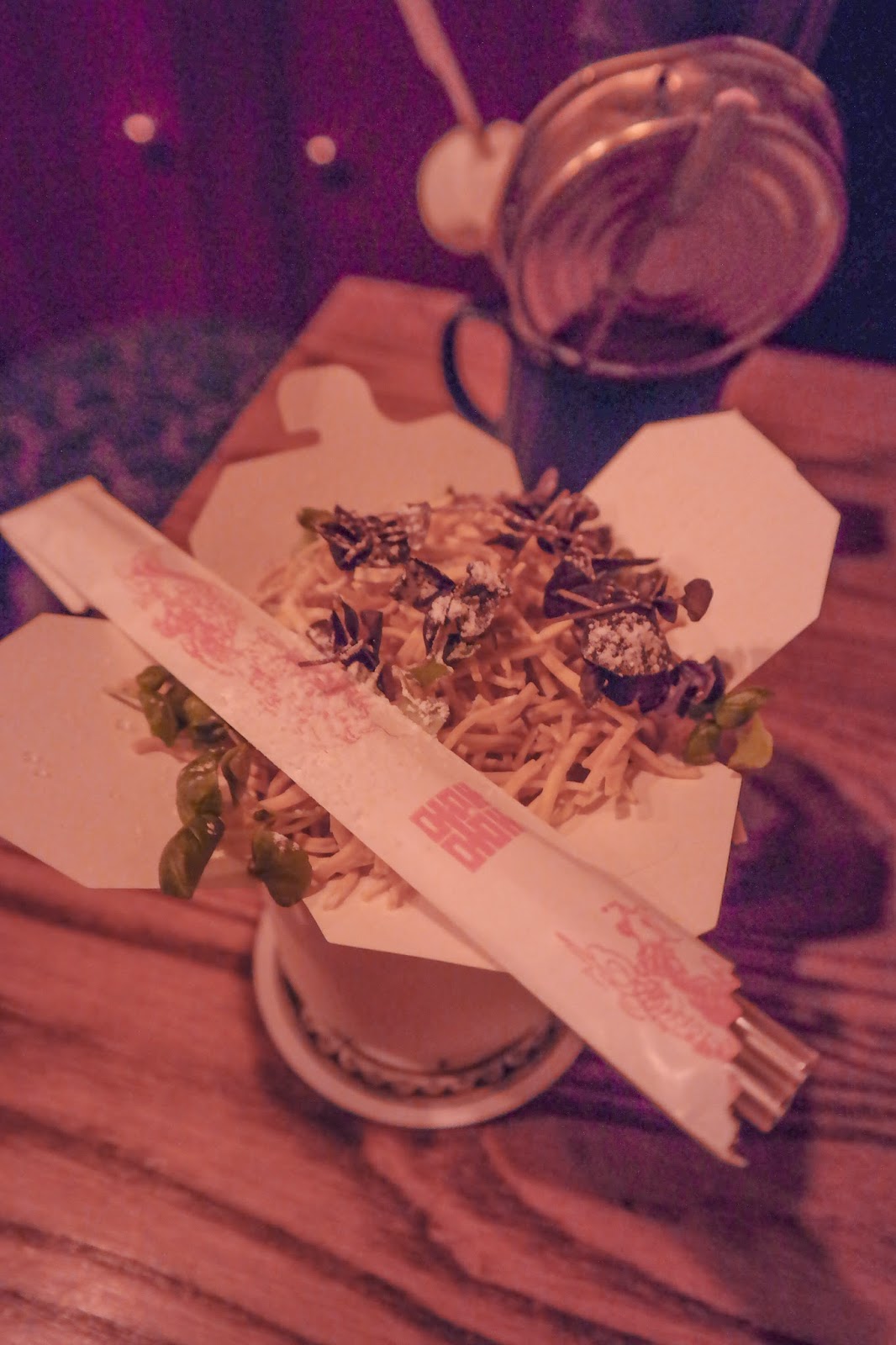 Again, presentation.  Wow.  Ten out of ten.  It's served in a noodle box.  It's got actual noodles and basil sprouts on top.  The straws look like chopsticks.  Let's face it, that's got to be the reason it's being named as one of the got-to-drink drinks of the minute, right?  Right?

WRONG.  It's gotten that status by being awesome.  It's fantastic, in fact.  Sweet, malty rich notes come through from the bourbon (my drink of choice at the moment, so yeah, I'm biased), followed by a long, spicy finish.  It's very nicely put together.

For seconds, I had the Sauvignon Private Ryan.  This was a hotch potch of calvados, dry sherry, sauvignon blanc, lemon juice and a cardamom and passionfruit syrup. 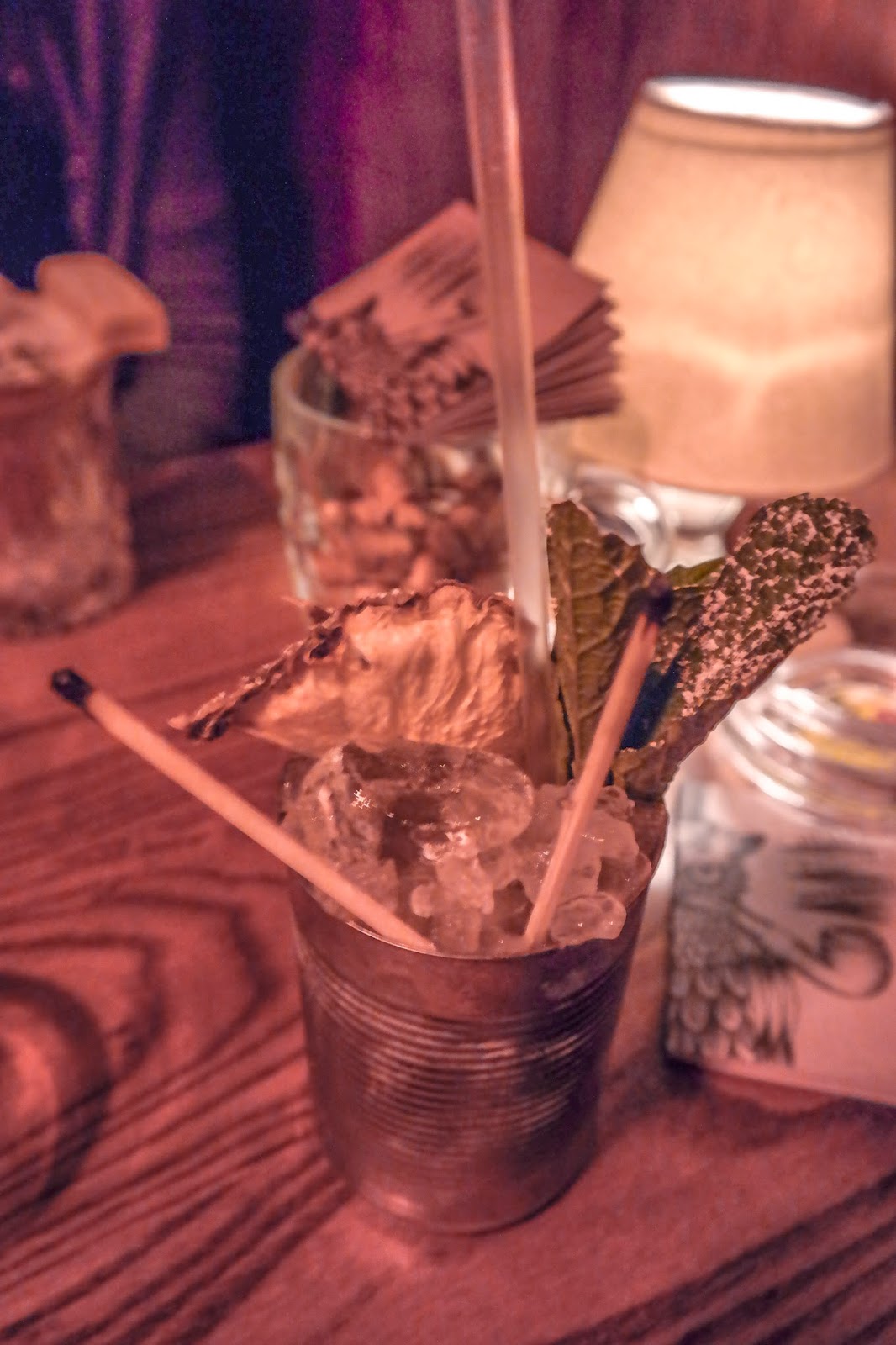 This was, dare I say it, a touch disappointing.  Not because it wasn't good – it bloody well was – but because it didn’t live up to the list of ingredients.  I lost the calvados and the sherry entirely, and the passionfruit was almost overbearing.  The white wine came through nicely though, like drinking white wine in the sun – leaving GrubsterGirl to say that it "tastes like Argentina".

But, they do give a quid for every drink served to The Royal British Legion's Poppy Appeal.  Which is kinda impressive when you think about it – especially given that Pret a Manger can only rustle up 5p per Christmas sandwich.  So a small, independent cocktail shop is prepared to give 11% of the proceeds of a drink to charity, whereas a massive, multinational company with a turnover of £510 million is only prepared to give away 1.4% of the proceeds of one, highly seasonal, sandwich to charity.  Compare and contrast that, Jules.

Mrs G finished up with a drink entitled For Whom the Bell Bols.  This mixed lavender & chamomile infused genever (the precursor drink to gin, from The Netherlands), golden syrup lemon juice and egg white.  It was garnished with star anise and other spices, and served with a  shortbread biscuit. 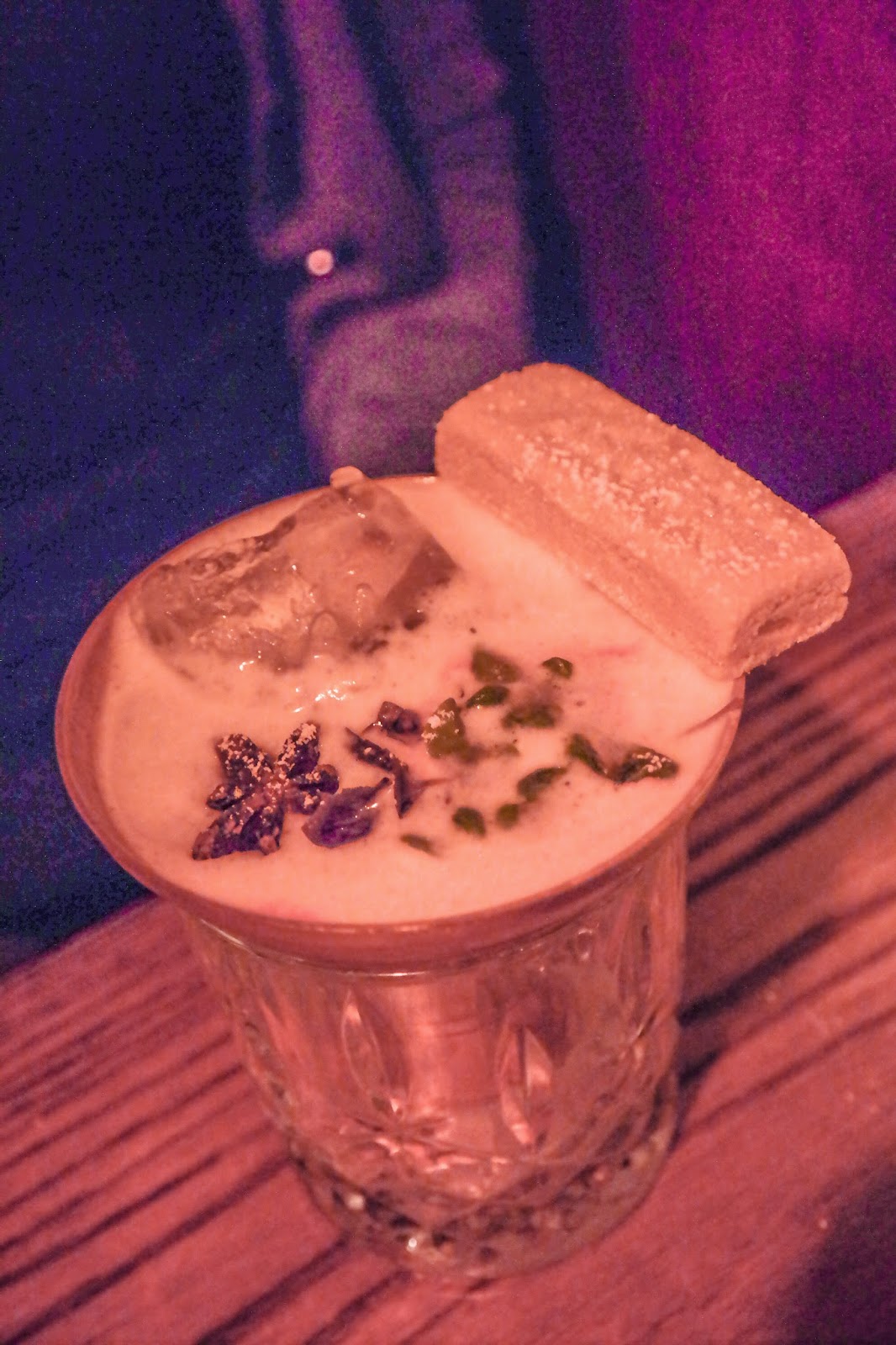 This was an absolute bloody triumph.  Somehow warming and milky (despite being perfectly chilled), with rich spicy notes as well as floral flavours coming through.  It was complex, but not overly so.  A perfect pudding drink, said Mrs G.

If quirky containers were the theme of the night, though, then this one won HANDS DOWN.  Seriously.  Sure, it didn’t have noodles.  Or a tin of small and toasted marshmallows.  It didn’t have huge matchsticks that obstinately refused to light.

But it was in a weird glass. Which, on closer inspection, was a bell. 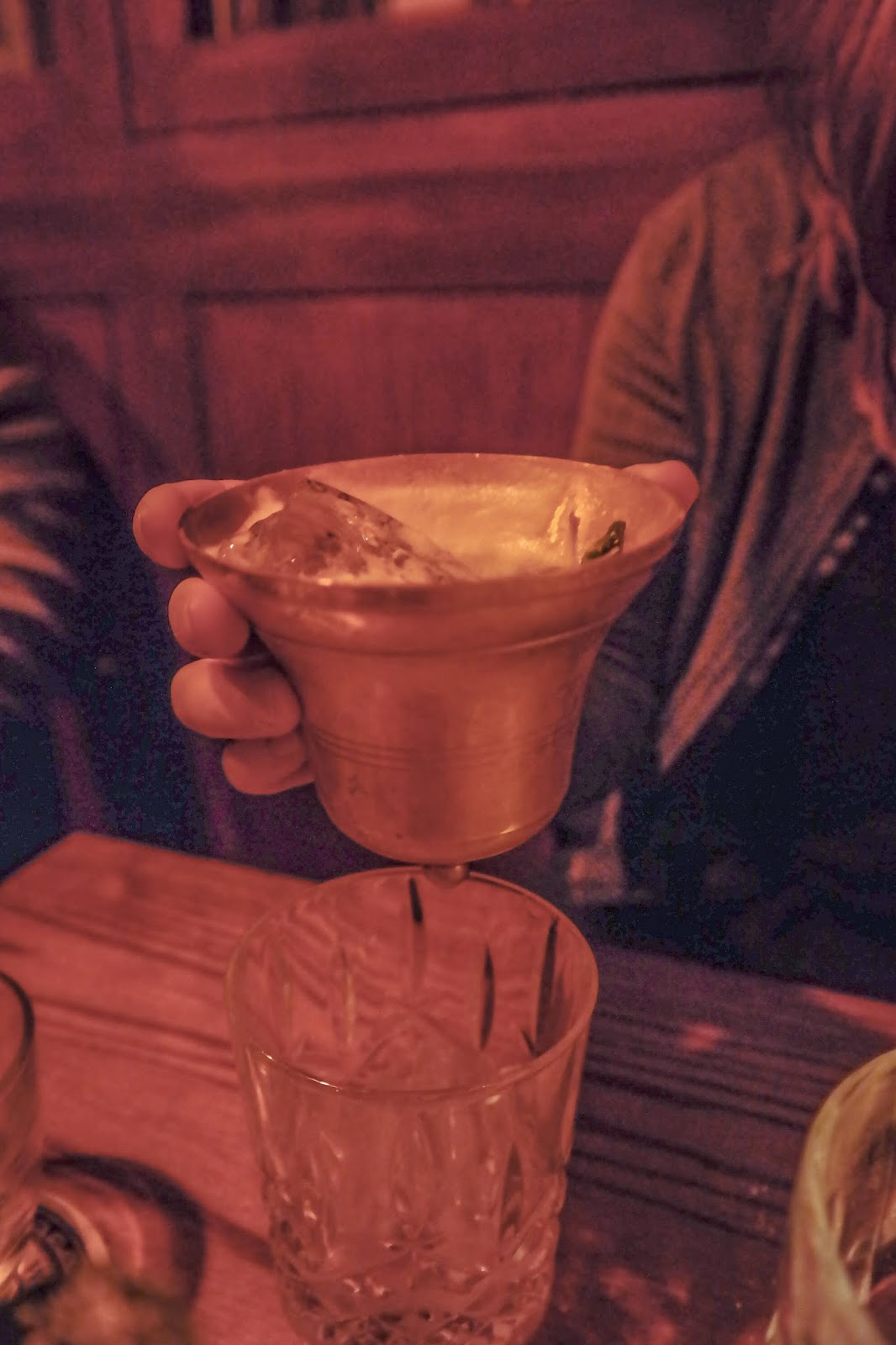 Seriously.  It's called For Whom the Bell Bols AND IT'S SERVED IN A SODDING BELL.  A BELL.  Which is carefully cupped in a glass of ice so it stays perfectly cold.  This is a GENIUS idea.  Barware skill level achieved: Expert.