7 Portes is one of those restaurants that's managed to basically scoop everyone else in the locale.  You ask friends where to go in Barcelona for a bit of grub, 7 Portes is likely to come up.  You pick up a guide book and flip to 'best restaurants' and you'll see 7 Portes somewhere on that page.  Restaurants like this aren’t always going to be the best – in fact, they can often be the worst – no, it's about having tapped into something bigger, some pulse of the city that means that its patrons feel like they've actually been to that city and lived the experience.  Like Café de la Monde in New Orleans, or Katz's Deli in New York or the Savoy Grill in London – if you visit you just have to go, even if it's not going to be the best meal you get in that city (except, at least in Katz's case, it's gonna come pretty darn close). 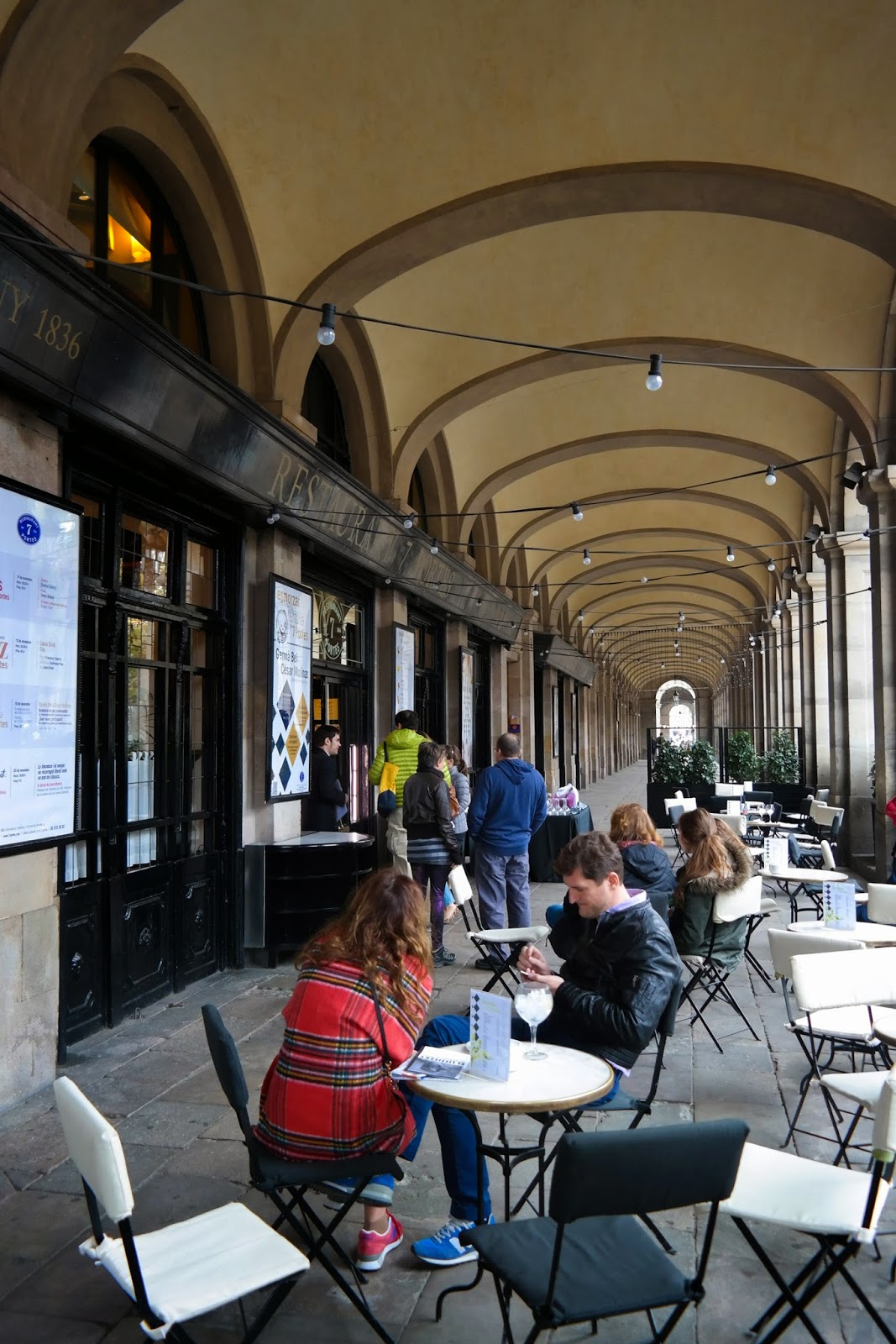 The interior of 7 Portes is definitely striking.  It's all oak beams and marble floors, reminding me of what we'd call the 'Grand Café', even if that that would make it Austrian.  Also, interestingly, around the walls are little plaques where famous people are supposed to have sat and taken their victuals.  The table to our left had house Truman Capote, and to our right Ernesto Ché Guevara.  Our table had played host to an obscure Spanish poet that I'd never heard of and now can't remember, which just goes to show that you kinda win some and lose some when it comes to which celeb had previously warmed your seat cushions. 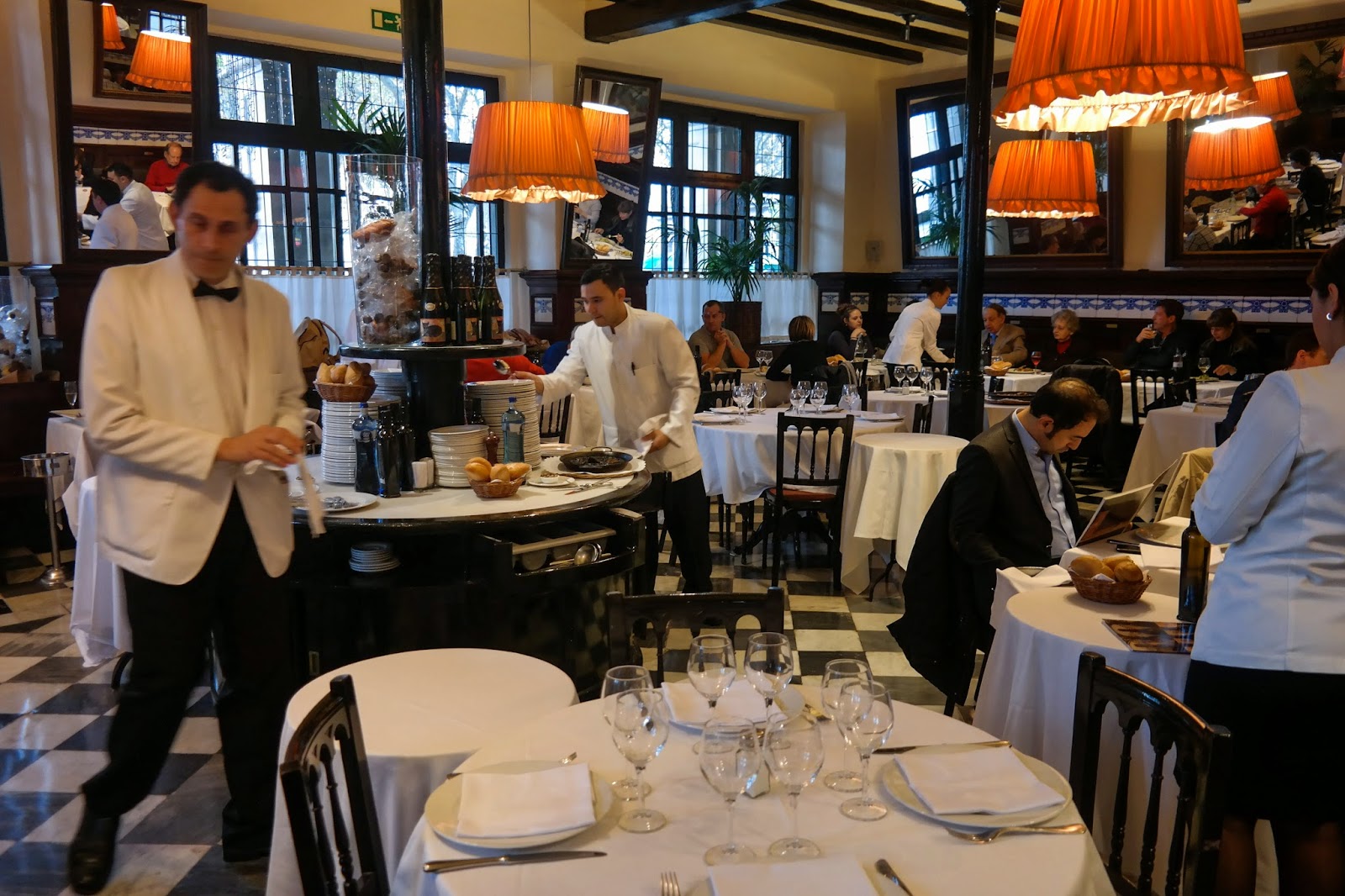 We opened proceedings with a (mini) bottle of cava.  Cava, so bemoaned by the English snob, is big business in Catalonia on account of so much of it being produced from hereabouts.  7 Portes house drop was pretty decent, too. 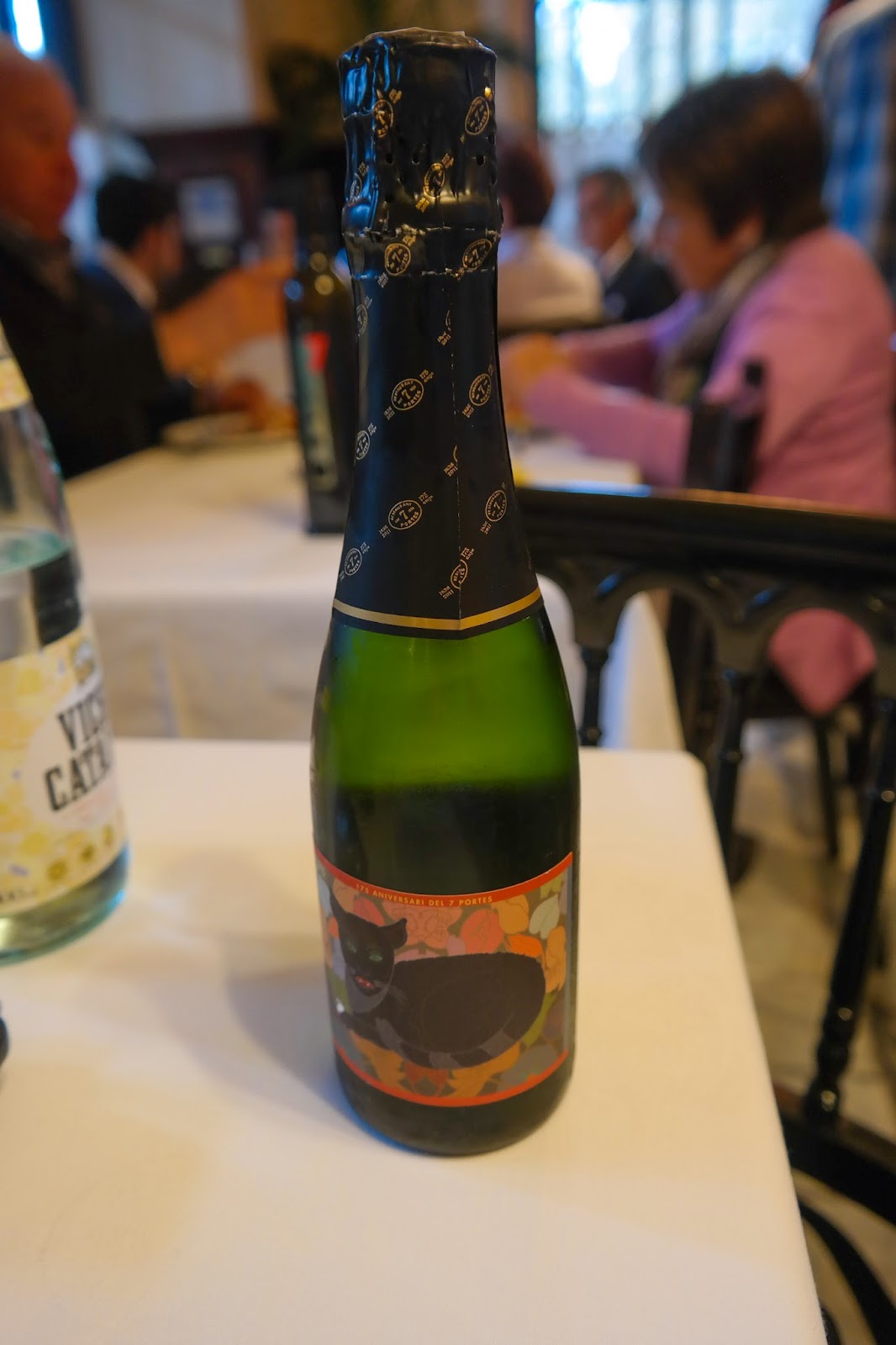 GrubsterGirl kicked off with the salt cod balls, whilst I dived in with a bowl of clams.

GG's cod balls were pretty good, but sadly just too bland.  A sauce – perhaps a romesco – would have been a delightful accompaniment, even if just to give the fritters a little 'wet'.  Also, the portion size was epic.  Much more than any one person should try to eat for a starter. 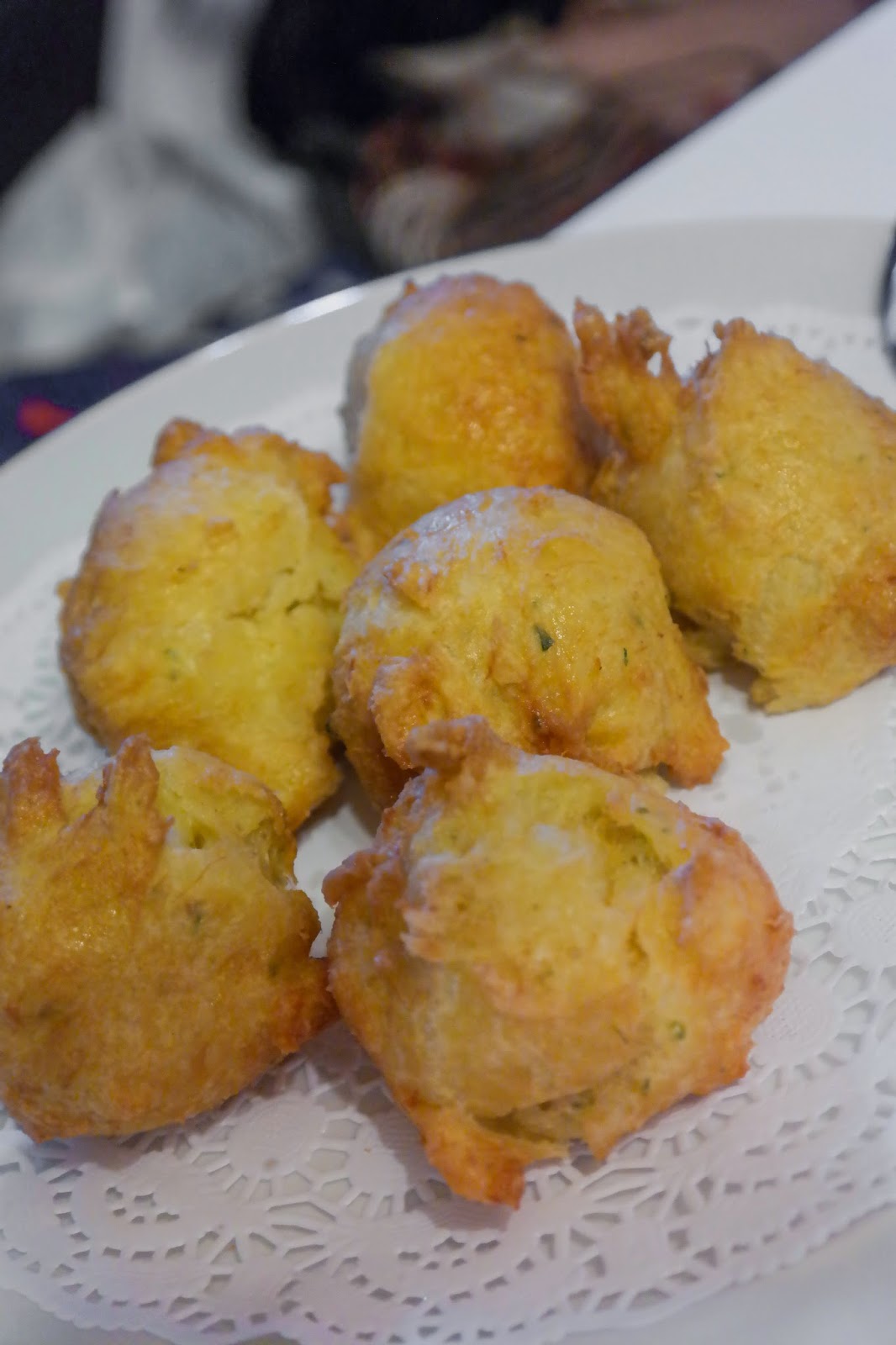 My clams, on the other hand, were fab.  Being by the sea you get a good range of seafood, and 7 Portes is supposed to be one of Barca's finest purveyors of Catalan cuisine, so I chose accordingly.  The molluscs were cooked in cider and vinegar, accompanied by thick slices of roasted garlic.  They had a sweet, almost caramel-esque, richness to them that was wonderfully matched by the scent of the vinegar (fortunately, none of its sharpness came through) and the fruitiness of the cider. 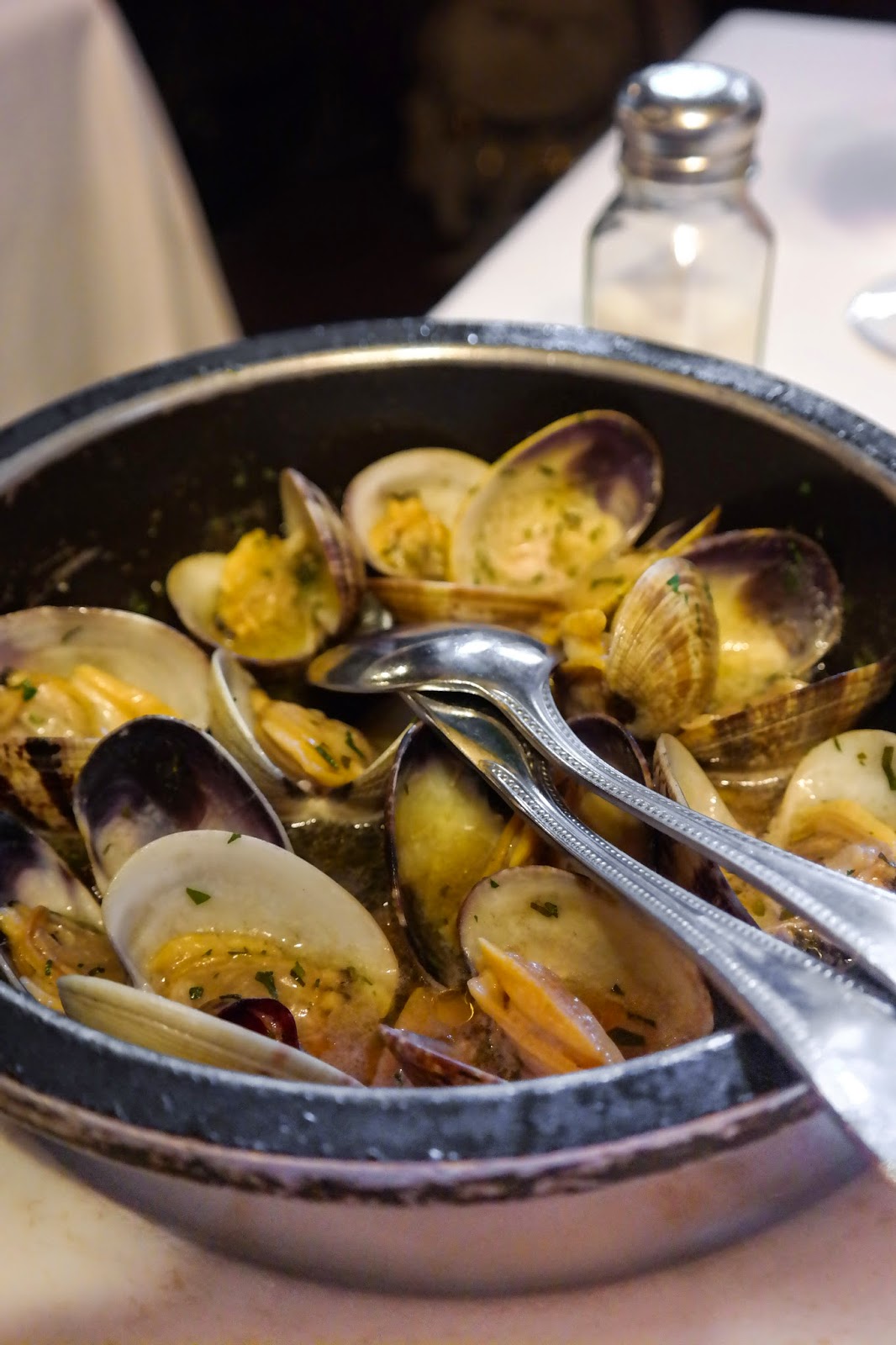 For the main, I had salt cod – bacalao for the uninitiated – and a massively popular foodstuff in Spain – was fantastic.  It was cooked with garlic and smoked paprika in the traditional 'llauna' (hot plate) style, and came on a portion of spicy white bean.  Very nice. 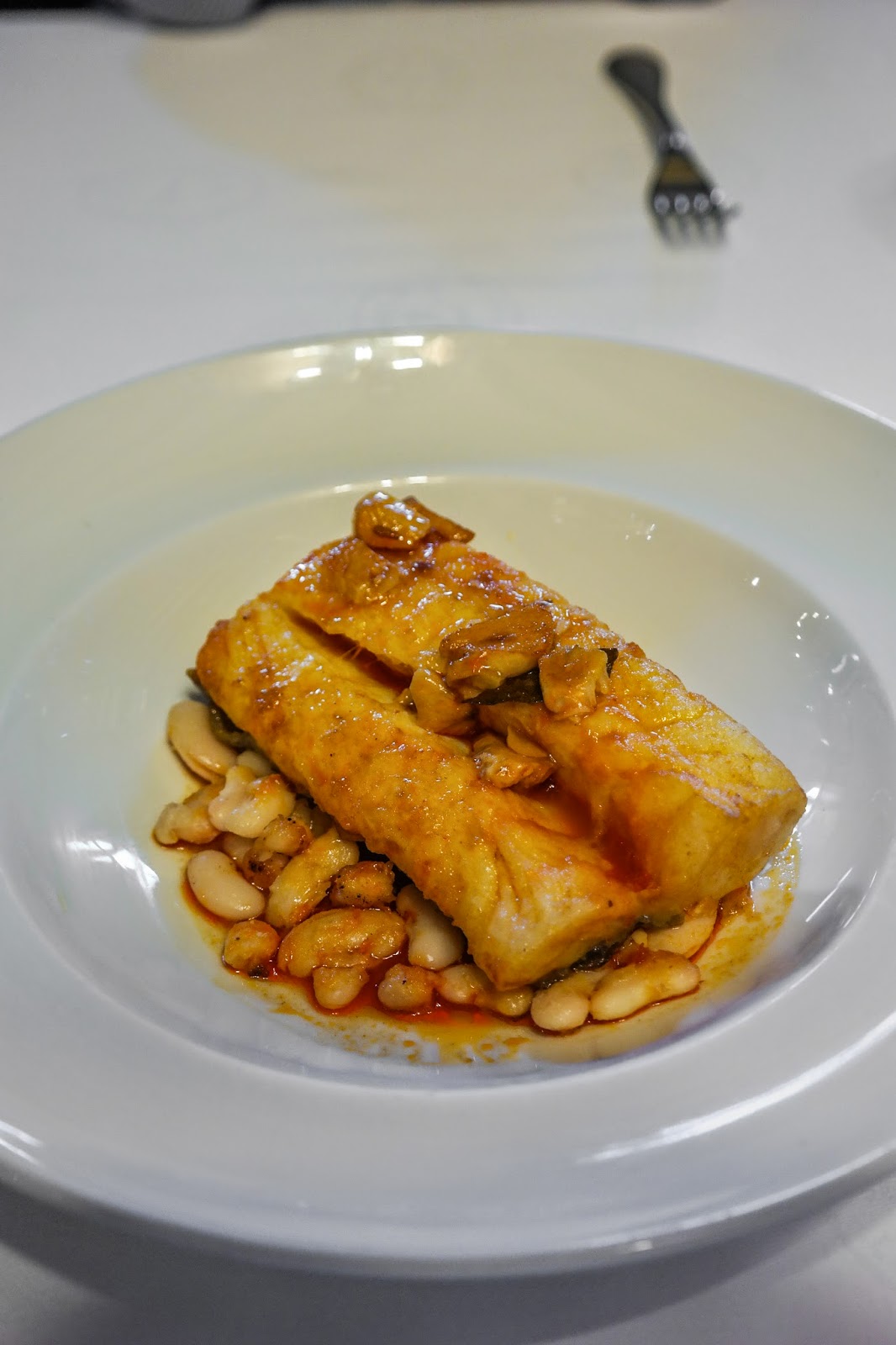 Mrs G went on to order the millionaires' paella for her main.  This is basically just a normal paella, albeit with all of the shells and bones removed so you can just pile whole forkfuls of hot, steaming rice and meat and fish into your mouth.  Good times.

It was very good – although once again it was way way way too big – what you see there is the portion for one (I jest not).  It also had slightly too strong a base – the stock (presumably) that was used to make it was so rich and heavy that it ran the risk of (and all too often did) wholly masking the more delicately flavoured shellfish. 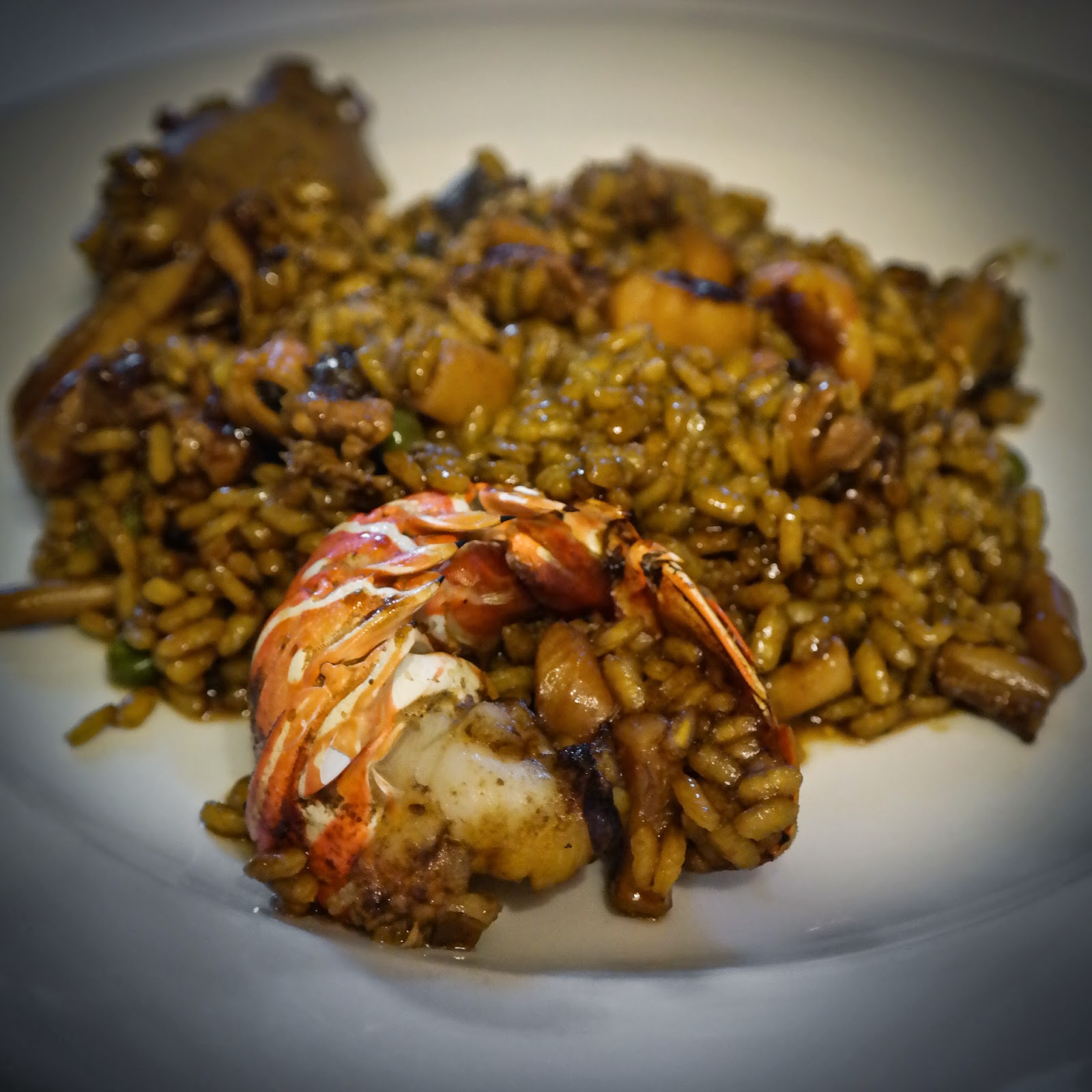 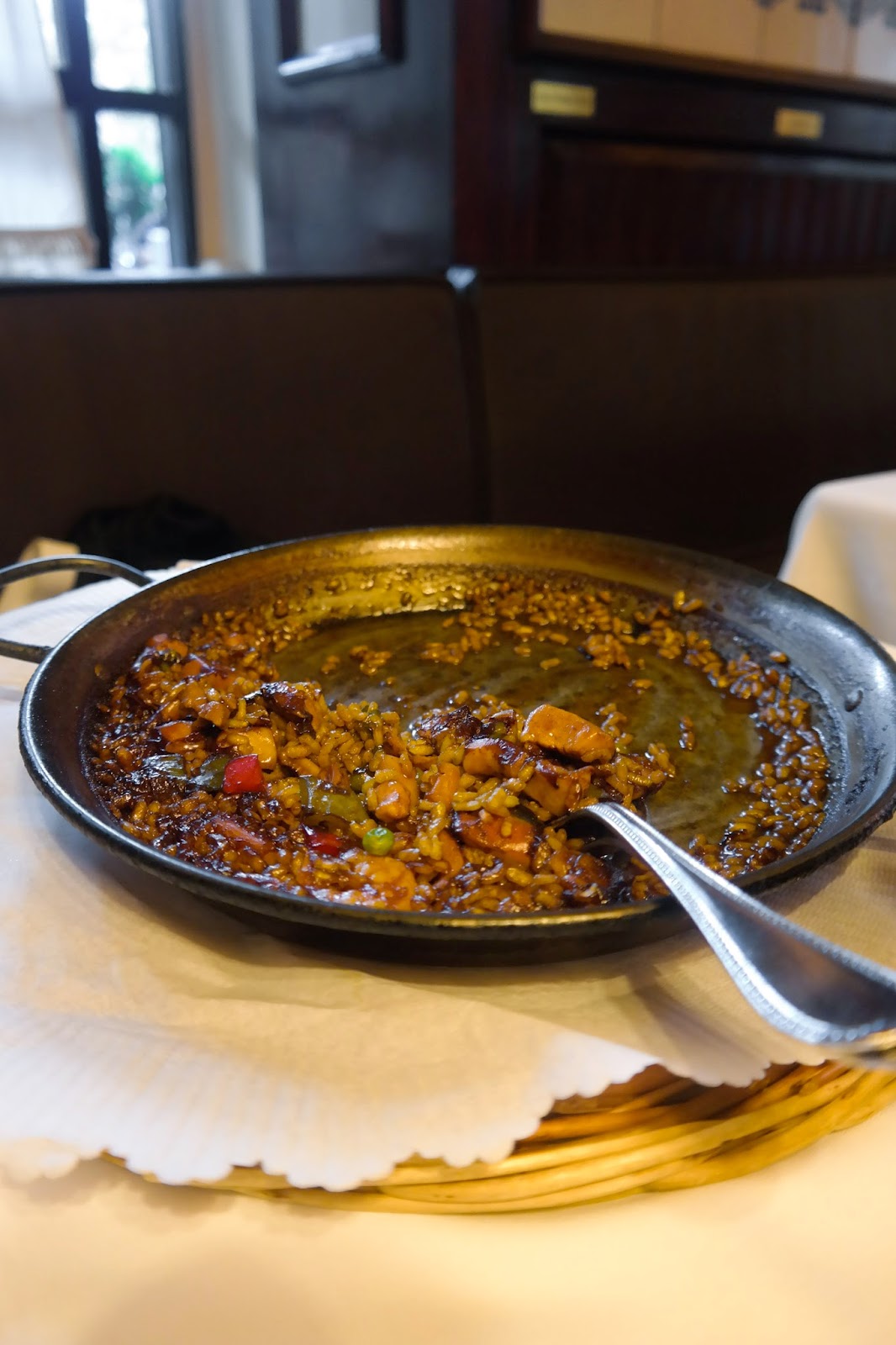 Puddings were a bit disappointing.  GrubsterGirl opted for vanilla ice cream with hot chocolate sauce, which is poured at your table.  They're actually very fond of this at 7 Portes, the old school style of having the waiter do much of the work at the table. 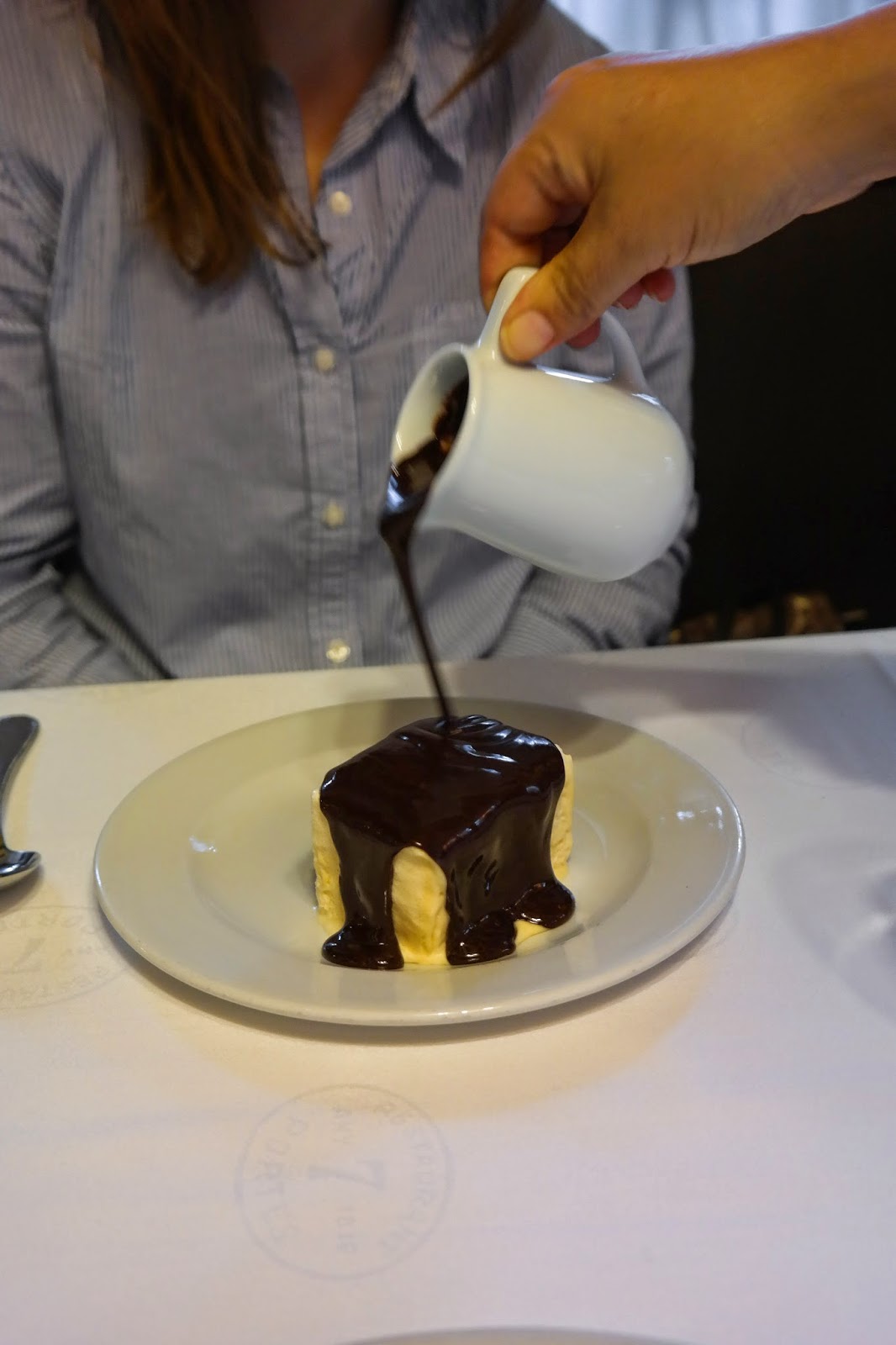 I had a similar affair, a block of vanilla ice cream covered in burnt caramel and scattered with a type of turron made from ground almonds. 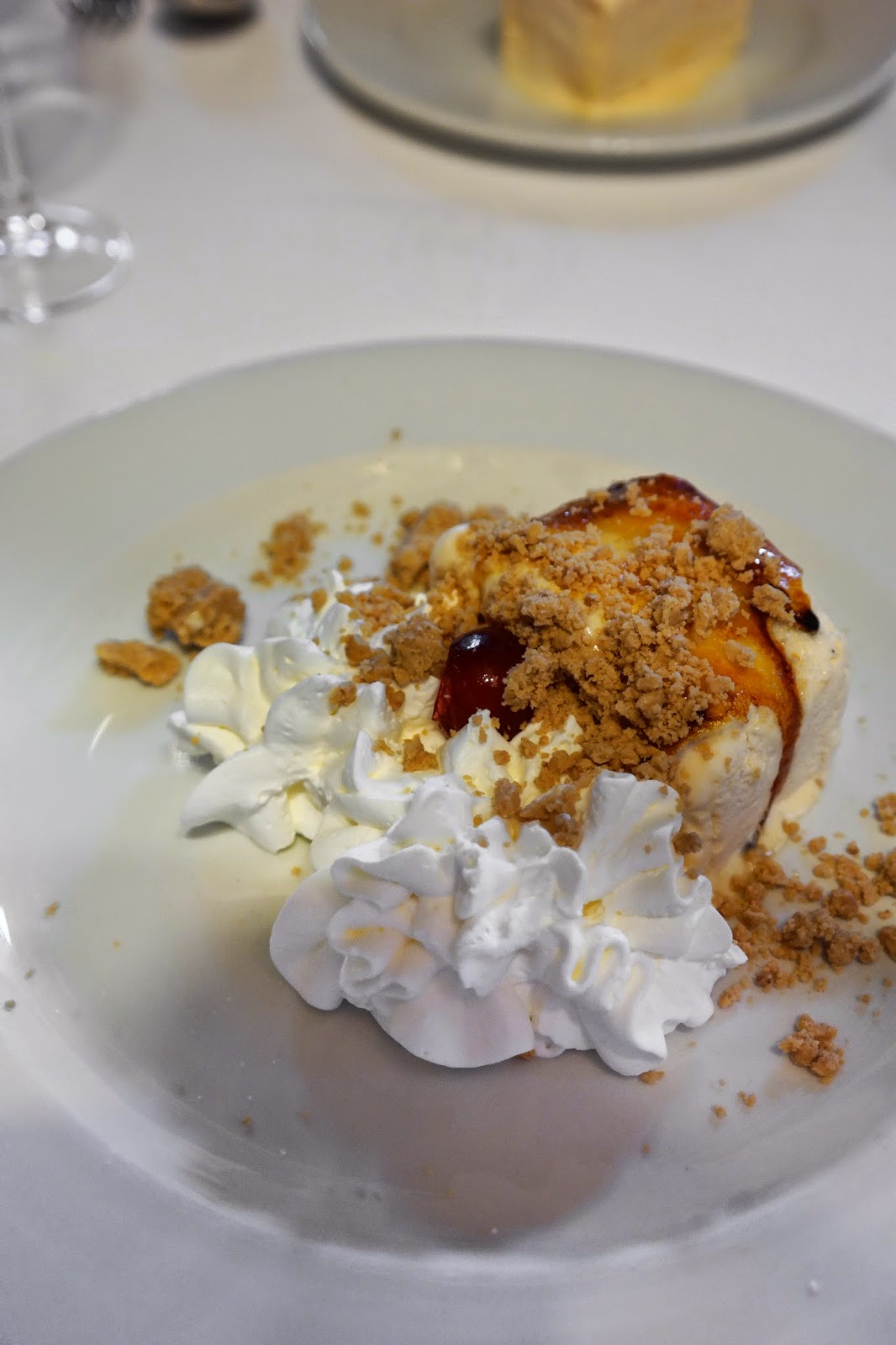