Fortunately, the problem of where to get dinner in Barcelona is (it is generally considered) not one of lack of resource.  On the contrary, I understand that it is far more difficult choosing which restaurant from the myriad options rather than there being none to choose from.  The second difficulty is booking a table.

That's pretty much how we ended up at Igueldo, a restaurant in the (sort of) centre of town peddling Basque cuisine. A review courtesy of Time Out and rankings amongst their best restaurants of Barcelona helped us pick it from the crowd, and our ability to score a table made our visit a certainty.

The restaurant itself is smart and appealing, in that white and brightly lit way that restaurants on the continent can be appealing.  Service was slow though – something that always makes me a bit cross, my mood not being improved one bit by the fact that (being Englishfolk, not Spaniards / Catalans) we chose to eat at 8.30pm and so were literally the first table to be seated.  Frankly, if you can't service a restaurant with only two people in it, how will you cope when it's stuffed to the gunwales.

We were approached with little amuse bouche of local sausage wrapped in toast and served with a honey and mustard sauce.  If this sounds a little bit like something your gran might serve at Christmas drinks, it's because it was. 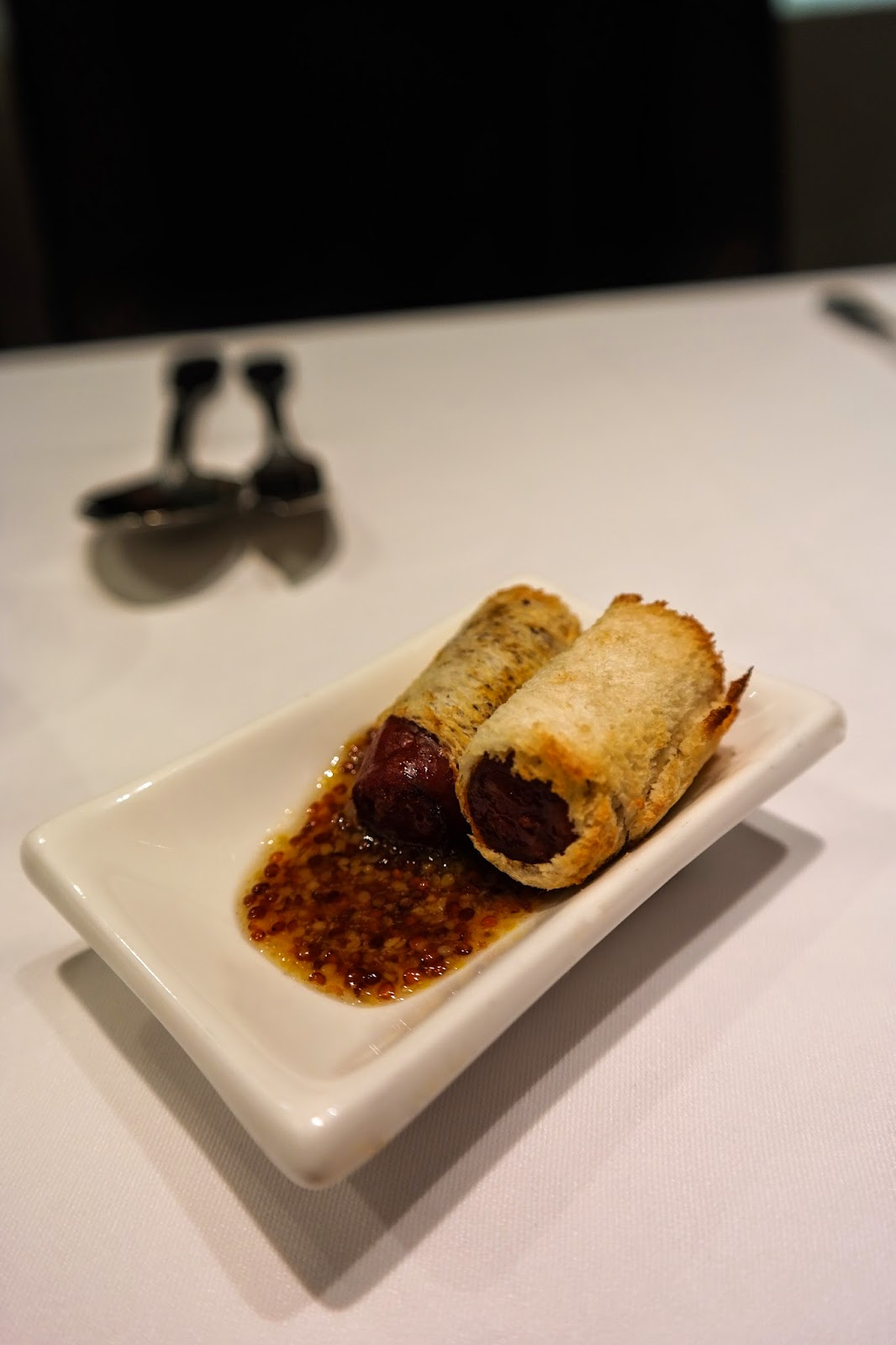 For starters we both chose to have the crab meat and chickpeas.  This came as a kind of chickpea stew, floating in rich, unctuous brown meat / fish soup, with a scoop of mixed, spiced crab meat and a drizzle of saffron aioli to keep it company.  I thought this was absolutely top banana.  GrubsterGirl described it as "a bit peasanty" which was, in fairness, bang on – but really very, very good with it. 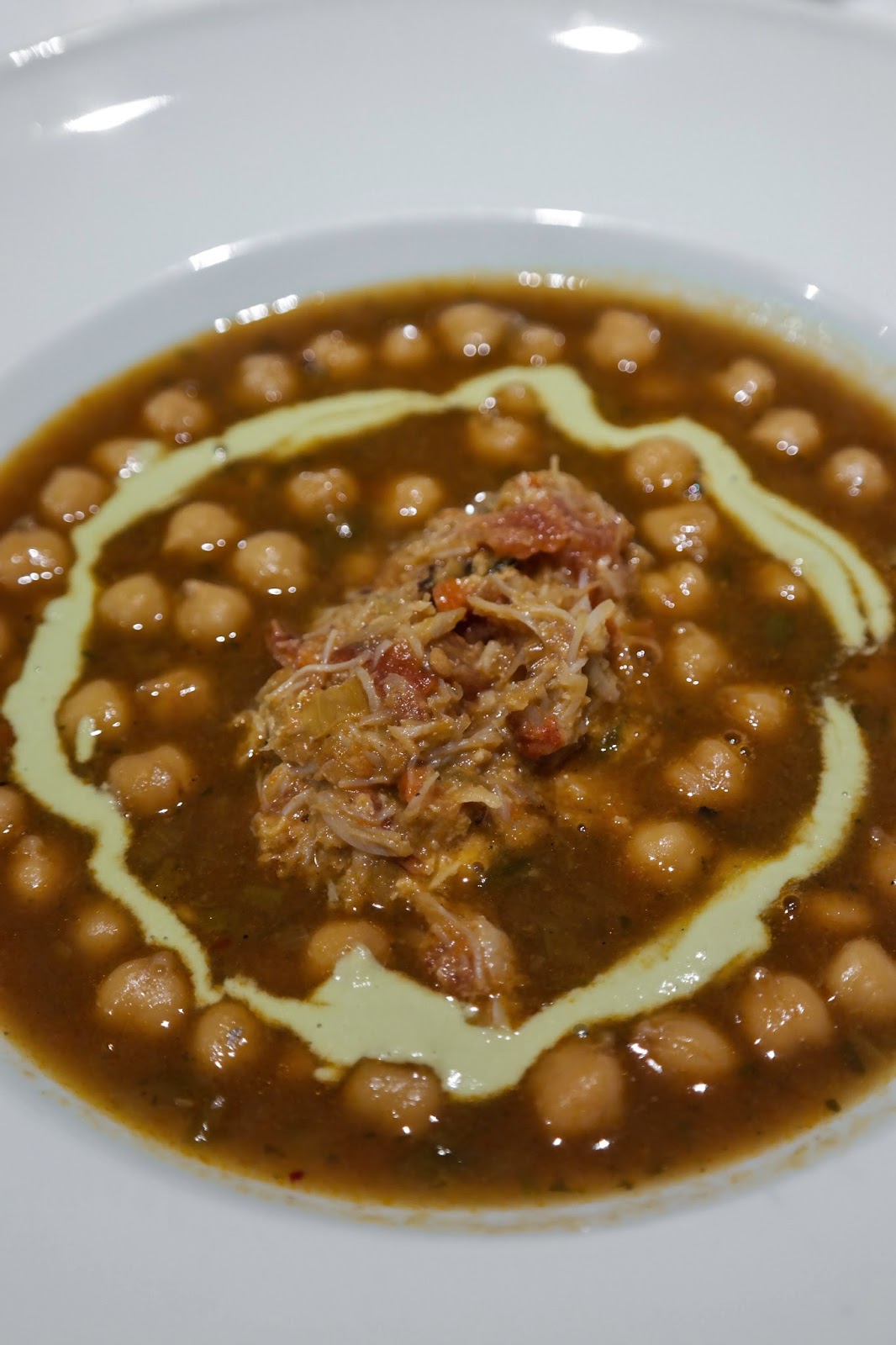 For mains we diverged.  Mrs Grubster went for fillet steak and foie gras, served with a port wine reduction and dauphinoise potatoes. 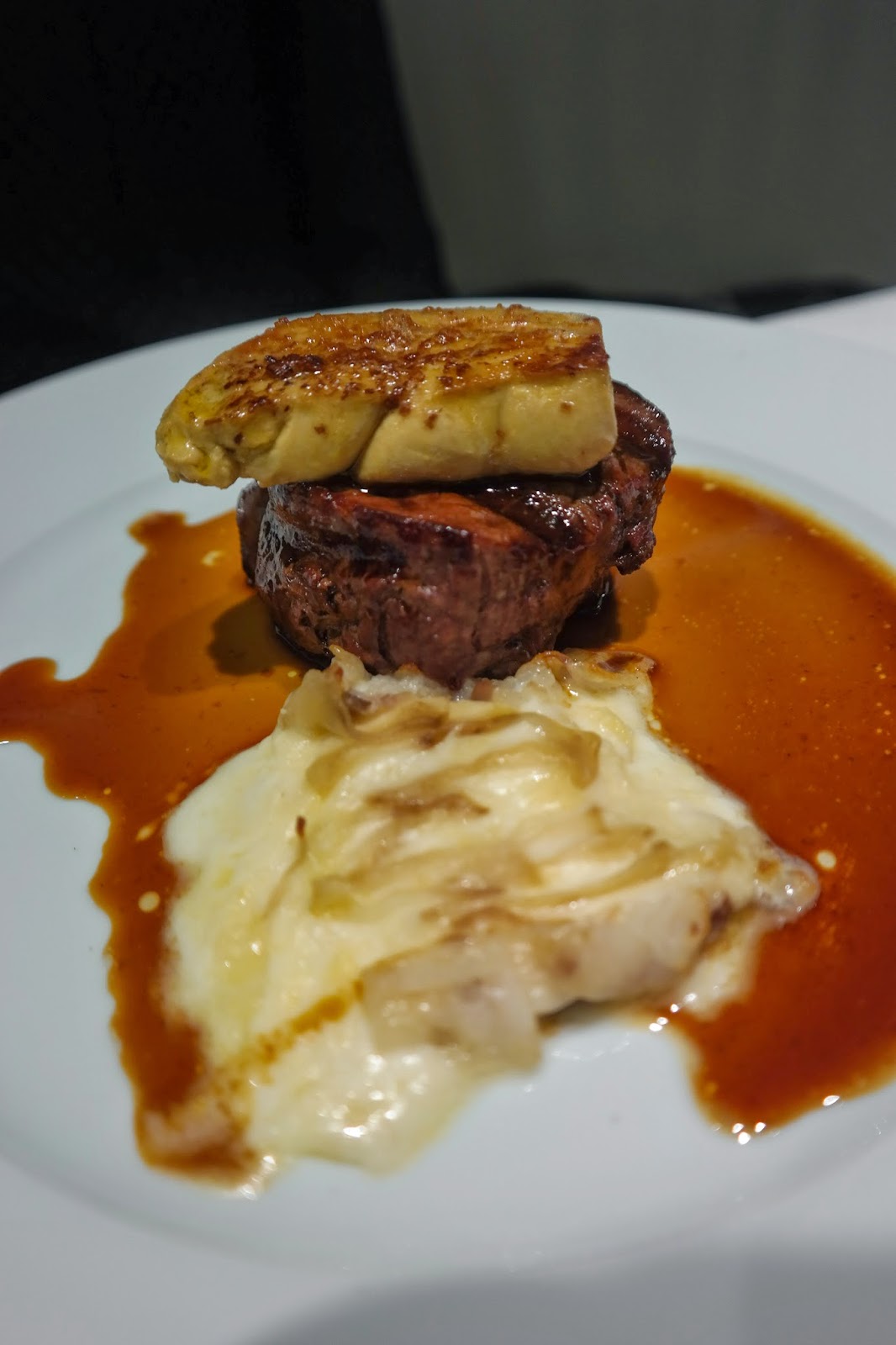 A treatise in richness - so much so that, tragically, half of the (enormous) portion of liver that came with the meat had to be abandoned.  But otherwise, nice.

I went for the duck breast – largely on the basis that I always order steak and am trying to get out of that habit – which came accompanied with a jus, steamed vegetables and sobresa. 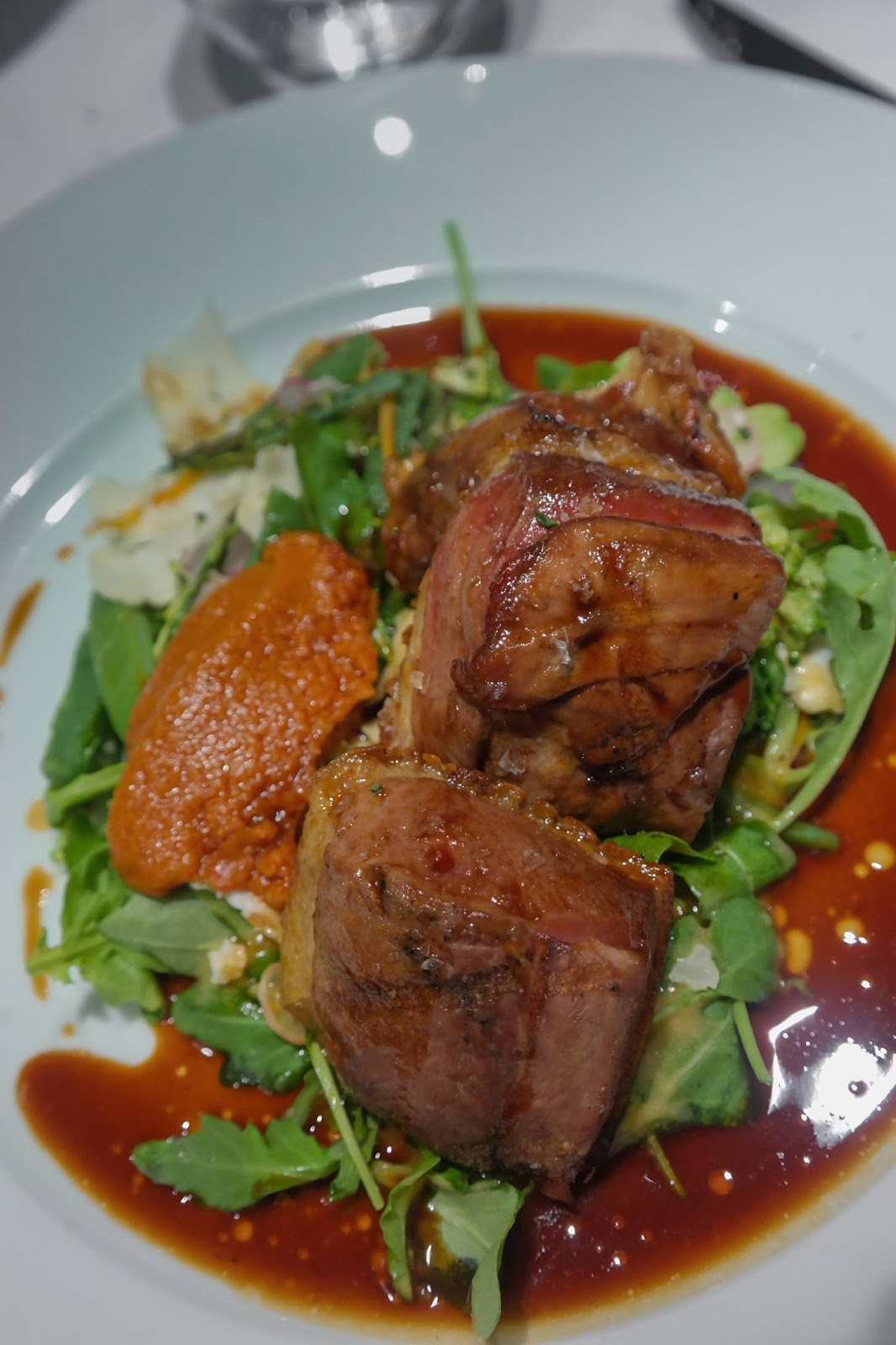 Sobresa is a soft of soft chorizo, a sausage that is so soft it can be (quite literally and often is) spread on toast.  The combination of flavours was excellent – fatty, rich duck and smoky chorizo work remarkably well together, it turns out.  The vegetables were... fine, I guess.  I can’t get excited about sliced, steamed veg, I'm afraid, and I couldn’t help wondering if something more innovative could have been offered.  But the real problem with my dish was the meat.  It tasted fine, but it was as tough as boots.  Which is odd, for duck, and I can only assume is the product of not letting it rest properly.

For pudding, I had the cream cheese soufflé with raspberry ice cream and chocolate soil. 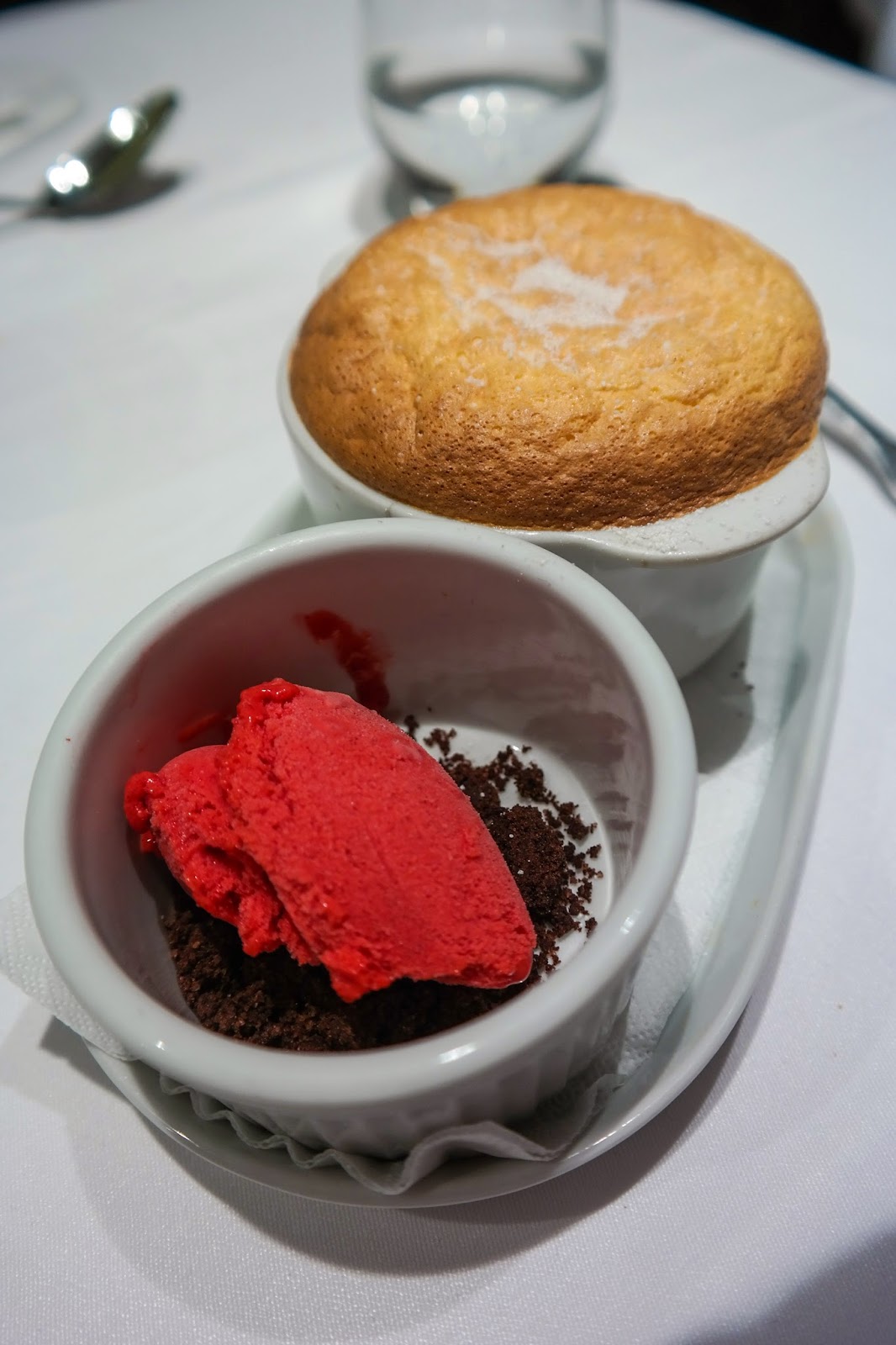 The chocolate soil was extremely soil-ly (almost gritty) but otherwise the dish was superb.  The soufflé was nice and light, with a twang of the soft cheese, and the raspberry sorbet was the perfect accompaniment in acting as a foil to the rich pudding.

Mrs G went for the melon granita, which came with hints of coconut, pineapple and jasmine.  Very refreshing, just what you need after a big rich meal like ours.  Although frankly I could only really taste the melon in there. 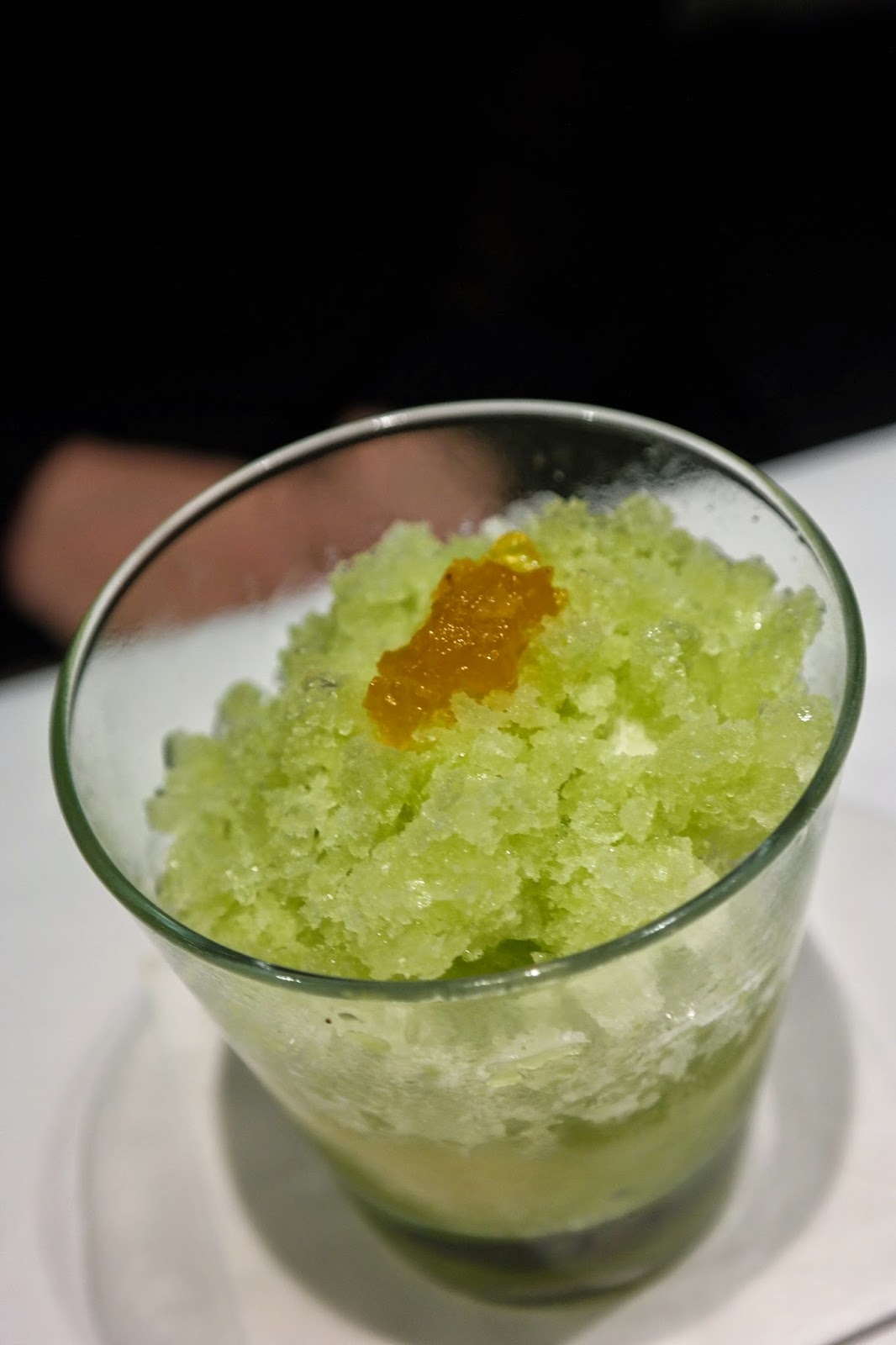 On balance, I have slightly mixed feelings about Igueldo.  I can’t really figure it out: either it's a wonderful restaurant that sometimes misses the mark (badly), or it's an outfit that has some major, structural problems that are offset by the occasional spark of genius.  Because when it was good it was brilliant - the duck / chorizo pairing, the cheese soufflé.  But things were definitely off – the tough duck, the over rich beef, the very slow service... So when it was bad, it was a bit grim.

Verdict?  Difficult to say.  Would I go back?  Not in a hurry.  Could it have been amazing, on a different night or if we'd ordered different food?  Definitely.