The Candy Store at Callooh Callay

Whisk(e)y and I get on well.  Have done for a number of years.  A very large number of years, in fact.  If I have to choose a cocktail on the spot, I'll always go for an old fashioned (and be often disappointed that they don’t seem able to produce one to my exacting specifications.  If I find myself in a cocktail bar, first thing I'll do is start leafing through the menu in search of the next whisky cocktail to down.
I also have a famously sweet tooth – something that I think manifests itself in this blog – whether through singing the praises of Mr Whippy or making homemade maraschino cherries or mixing in sugar-coated onions with toad-in-the-hole.
So when I heard about Callooh Callay's most recent installation, The Candy Store, the first thing I thought was: I have got to go.
Billed as 'whisky, cocktails and candy', it's a themed bar that actually works – something we're not too to, sadly enough.  It's situated in the upstairs room of Callooh Callay, which I understand has been being used by Callooh Callay for some time now for specialist pop-up cocktail bars – a bit like one of those artists' studios, with different folk 'in residence' every couple of months, but a lot, lot cooler.  The upstairs room has to be reached through the backroom, which in turn has to be reached by walking through a big, mirrored wardrobe.  I'll confess something: my heart sank a little at this point.  Too much, way way way too much, has been put into the whole prohibition-era, hidden away, secret bar thing, and it's really beginning to hack me off.  I had a horrific experience with this at The Evans & Peel Detective Agency last year, so the moment I saw this method of entrance, I balked.
In keeping with the name the entire place is done up like an old fashioned sweetshop, from the red and white striped wallpaper to the countless jars of penny chews dotted around the place – all of which you're invited to help yourself from. 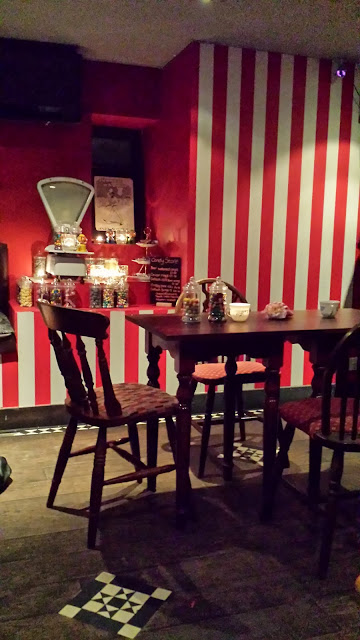 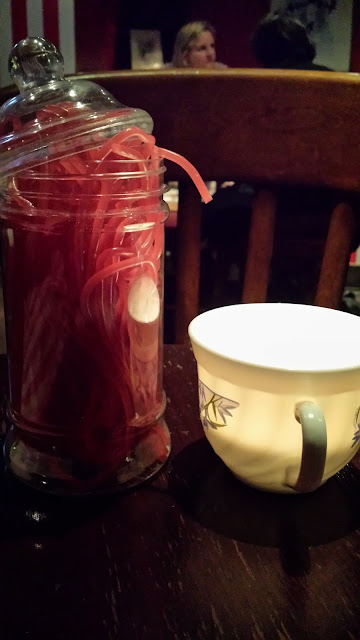 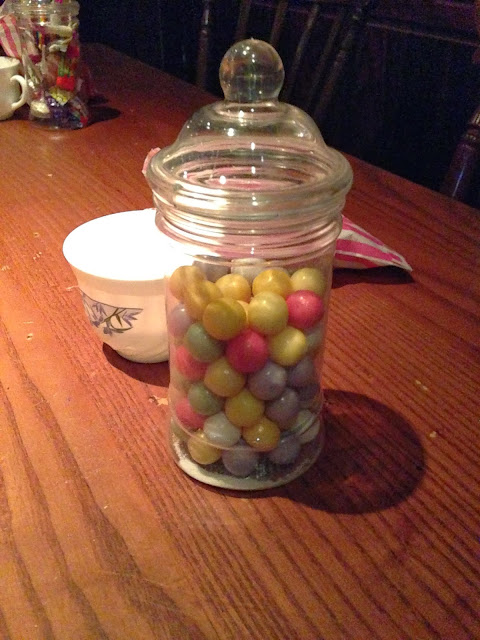 The drinks themselves are pretty impressive too, but then that's sort of what you'd expect from a cocktail bar with the pedigree of Callooh Callay behind it – remember, this is a place that has been named amongst Time Out's best bars in the Capital.
I kicked off proceedings with the charmingly named Love You Lots Like Jelly Tots (a bit of a mouthful, but what do you expect from a place that gives you unlimited free gobstoppers with your drinks?).  It was fantastically well done on every count – the perfect blend of sweet and salt (another of my favourite combinations) with the smoky, savoury flavours of the Royal Lochnagar cutting through the fruitiness of the lime and sweetness of the briottet coquelicot (a liqueur made from poppies – honestly!). The jam is wonderful too – who knew that jam and whisky made such good bedfellows?  That it was served in three little snifter glasses – like individual jelly tots – didn't hurt one bit. 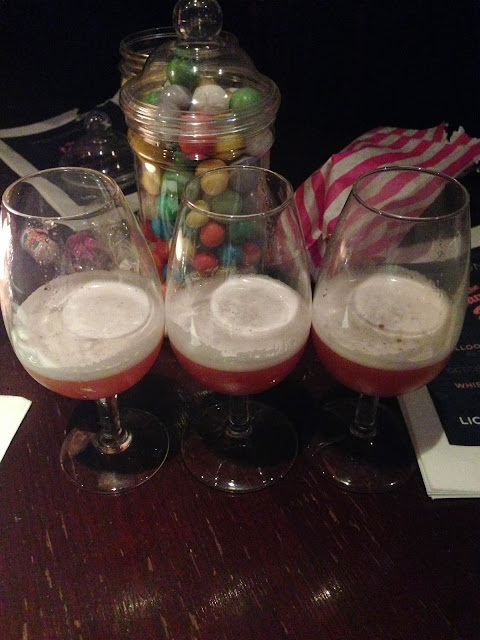 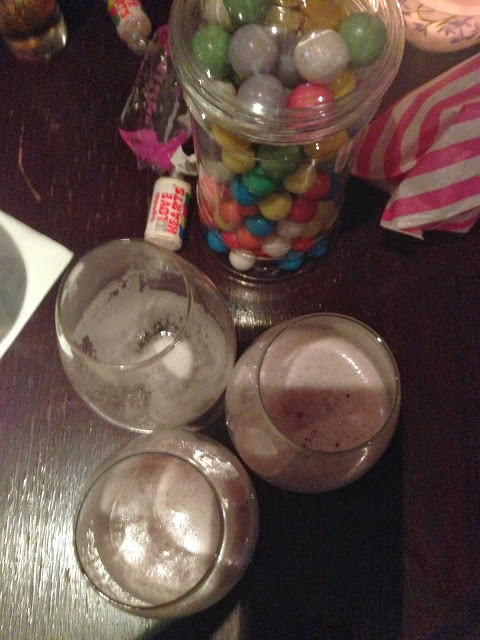 My friend and partner in crime, Victoria (GrubsterGirl is, sadly, rather adverse to whisky of any kind), ordered up the Berry Jelly Collins – a medley of Speyside, Chambord and other lovely stuff, served with a little shot glass of raspberry and prosecco jelly on the side.  I like drinks with stuff served on the side – it's nice to have a bit extra.  As for the drink?  Equally superb. 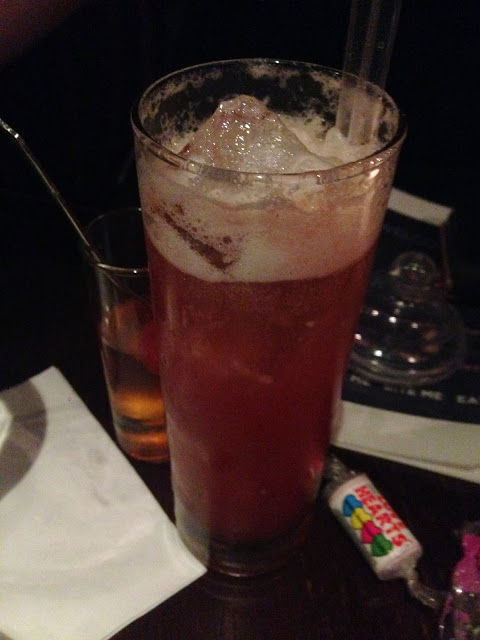 Between courses (booze courses, that is) we had a couple of snacks.  Sadly, their beer battered chips had come off the menu – apparently (according to our server) because they were "just too intense".  Whether that meant too greasy or that they just said really awkward things that weren't even meant to be a joke we shall never know.  The chips we did have were a little disappointing, in that there were exactly five of them and they were about two inches thick both ways, and four inches long.  Genuinely, carry that thing on the street and you're liable to be arrested for carrying an offensive weapon.
We also had onion rings, however, and they were bloody marvellous.  I basically had to restrain Victoria from eating the lot. 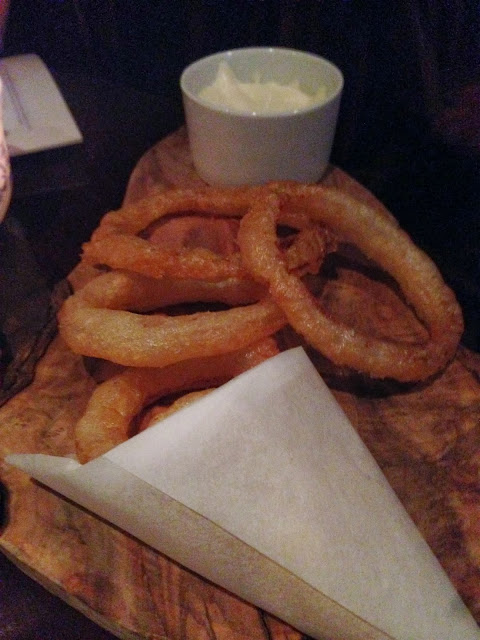 Also (although we didn’t have them but did see them) they had a trio of sliders going with some interesting toppings.  Definitely looked like they'd be worth a try if you wanted something a touch more substantial.
But wait, I'm leaving out the most exciting bit of food – the menu!  That's right.  They whole thing was made of rice paper and edible.  So we ate it. 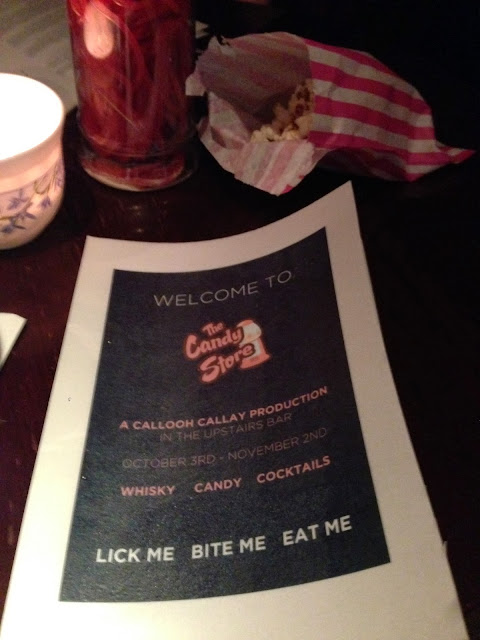 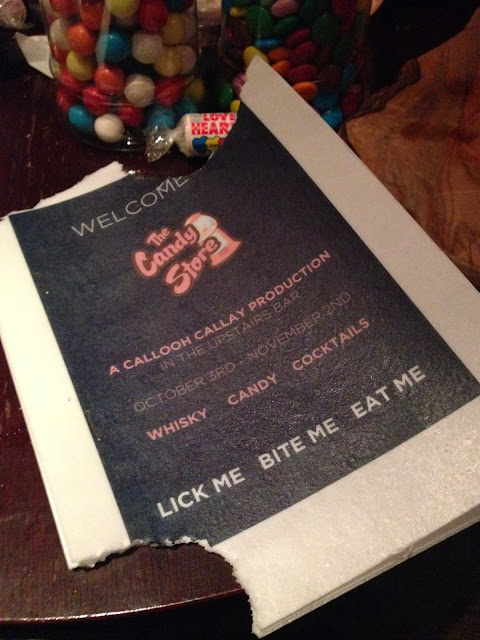 Victoria particularly enjoyed the eating of it.

Back to the drinks then, we decided on another round.  I hit up the Tipsy Dipsy, whilst my collaborator had the Davey Dee’s Delightful Dream. 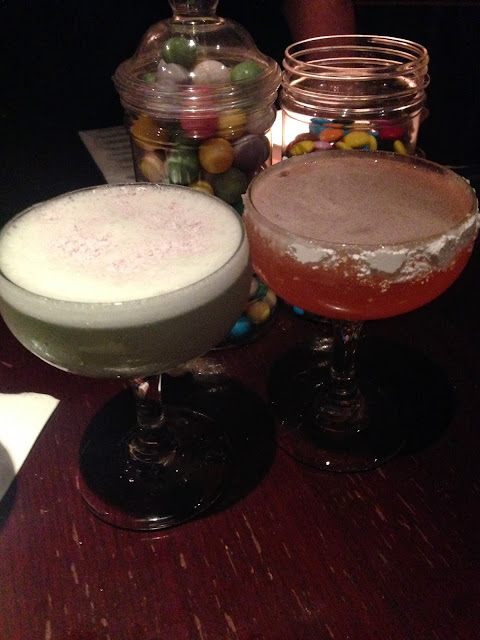 Mine was, sadly, a bit of a disappointment.  You throw lemon juice and prosecco into a glass and give it a sherbet rim you're going to end up with something pretty tart, regardless of how much poppy liqueur you throw in there.  For me it was just too tart – it should have been called something like Sherbet Sourz (a la Haribo Sourz).  But pause a minute here: because my associate adored it.  Absolutely loved it – specifically, the intense sourness of it.  So I'm not going to write it off like that. 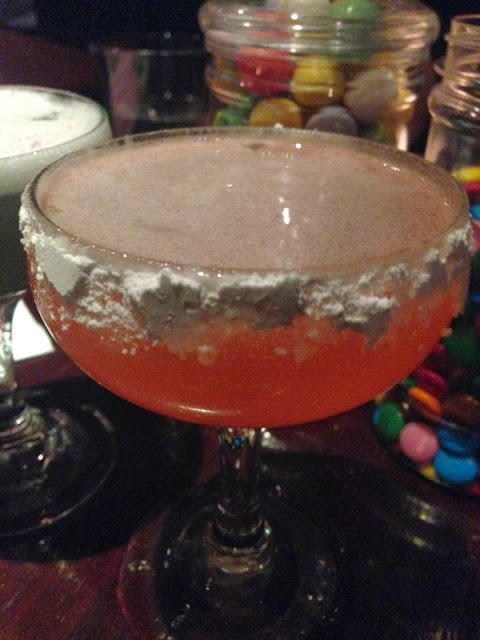 The Dream was similarly a touch disappointing – although still nice, in my view.  It was billed as an alcoholic Parma Violet, and laced with violet liqueur, but sadly failed almost entirely to deliver on the promised violet essence.  Still, a good drink in itself; if its only crime is not living up to the magic of our childhood rememberings, then we can hardly criticise – if we did, they'd be hardly anything we can look at with pleasure now we're grown-up. 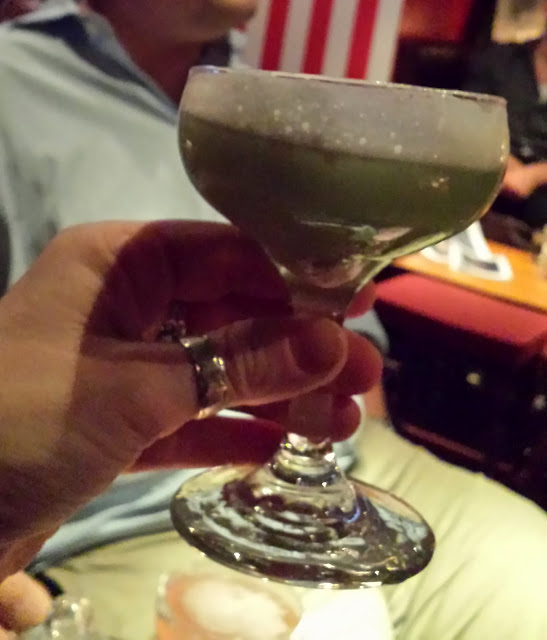 If you like whisk(e)y at all then do go, it's a great little place.  Make sure you book, though – we saw people turned away and there's only a half dozen or so tables.  Also, it's a bar in residence – so it's only there for a little while longer.  We went shortly before it was due to close, but you've all been very fortunate: given its success, Callooh Callay are keeping the Candy Store open until the beginning of next year.
- GrubsterBoy -


Credit: Photos 1, 2 and 12 taken by Victoria Tills, my most excellent friend and generally good egg who confesses that her photo-taking skills post whisky imbibition are not up to much, but I think are still pretty damn good.  She got a photo on the BBC too, so she's, like, well talented, innit.
Posted by Grubster Boy at 16:49