Some years back I lived in Edinburgh, the Athens of the North, a fine epithet as epithets go, although you never hear people referring to Athens as the Edinburgh of the South.

There was, in the 'burgh, a pretty decent farmers market on Castle Terrace, sitting in the shadow of the Castle.  Not a bad place to be. 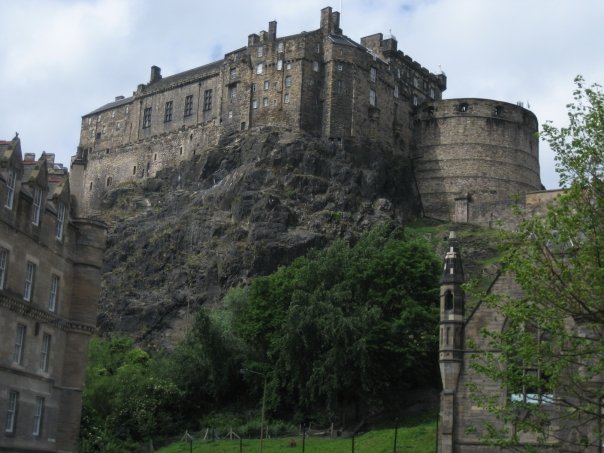 Once, I stumbled upon hot smoked salmon being sold in bloody great big chunks.  I succumbed, and bought it, cooking it up that night with potatoes, smoky bacon, onions and tomatoes.  It was aces.

I hadn’t seen smoked salmon being sold in big chunks like that for some time.  Until last night, in Sainsburys.  Even then it wasn't being sold hot smoked, but lightly oak smoked.  Nevertheless, I had to try to recreate the magic.  Adapting (slightly) a Nigel slater recipe I set about my task.

Smoked streaky bacon
400g new potatoes
Half an onion (not actually called for in the recipe, but this was one of those buy-first-check-recipes-later kind of affairs, and it didn't seem to do any harm...)

Cavolo nero (or any other accompaniment, but these worked especially well – the bitter, beefy, slightly metallic taste perfectly offsetting the richness of the fish sauce) 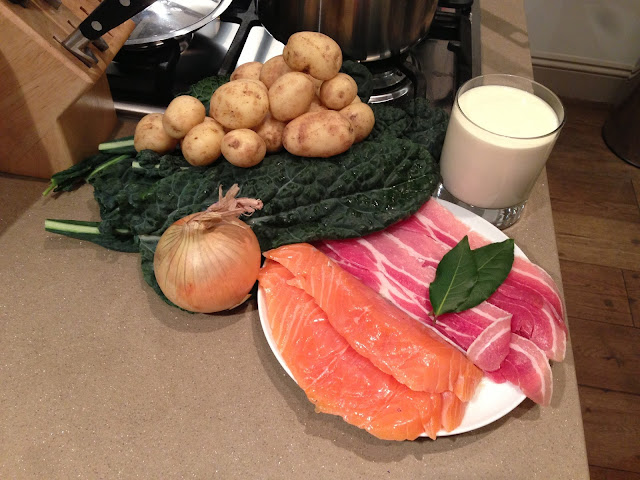 1. Chop them onions finely. Chop the bacon.  Nigel says postage stamp sized, which is a great unit of size that I am going to adopt generally.  Chop the tatties small.  I couldn’t be faffed to do Nigel's 'tiny chips', which was a big mistake – these took too long to cook, meaning the bacon was a touch overdone by the end. 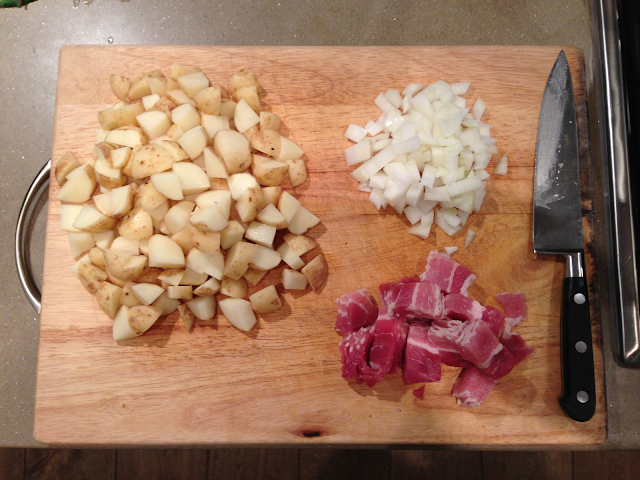 2. Get the onions and bacon frying in the pan, softening the onions and browning the bacon ever-so-slightly.  It's going to get a lot more cooking, so don't crisp it up at this stage.  Do add a little oil – sure, the bacon will produce some, but you'll need extra for the tatties.  Once there, add said tatties and start frying, turning them every so often. 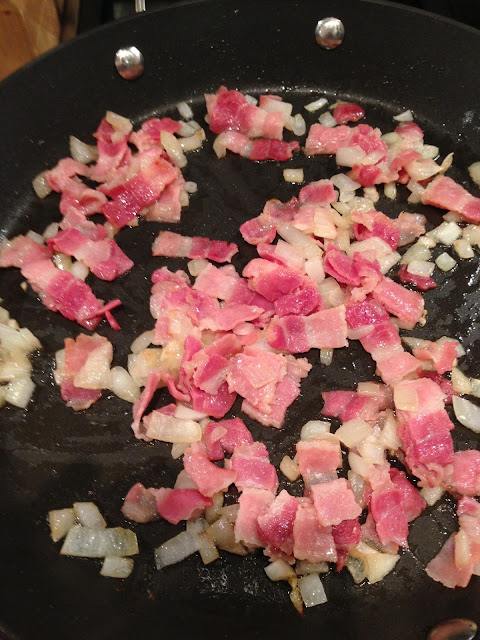 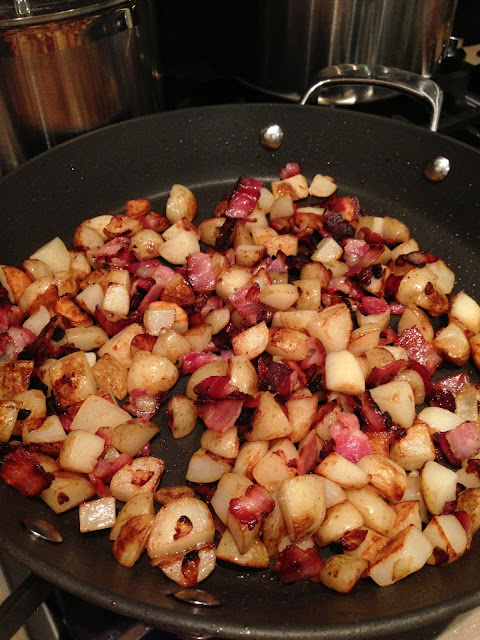 3. Put the fish in a saucepan with the cream, bay leaves and peppercorns.  Six peppercorns.  Not five, not seven; six.  Also, bay leaves.  Courtesy of a neighbour's garden.  Oops.  Simmer for five minutes or so, then lid on, heat off, and leave to soak up the ambience whilst the tatties finish off. 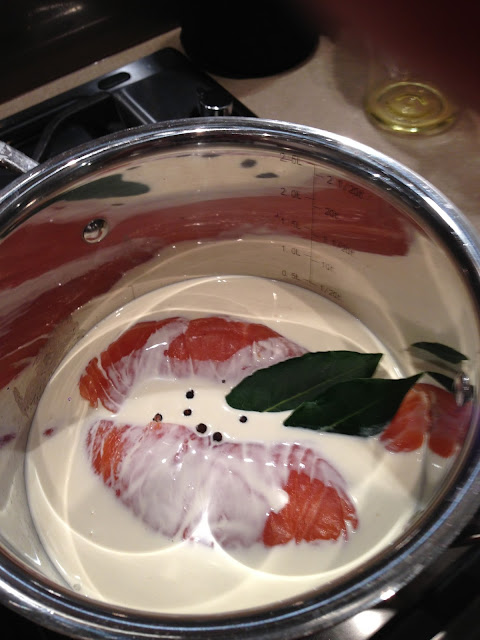 4. Wash your greens.  Really.  I know it says you need to on the packet, and that you never do, but seriously: do it.  Mine had a flipping huge caterpillar in a cocoon in it that started crawling out to attack me when it was disturbed.  Remove the thick inner stalk (see below) and slice into thick ribbons.  Steam for one minute when the tatties are about done.  Add no butter or flavouring; the sauce will do all the magic.

(No steamer? No problem – just stick them in a sieve on top of a pan with an inch of boiling water in the bottom then stick the lid on.  That's what I did, and it worked a treat.)

5.  Assemble.  Tatties & bacon on plate, fish fillet on top, sauce over everything and greens on the side.  Wolf down. 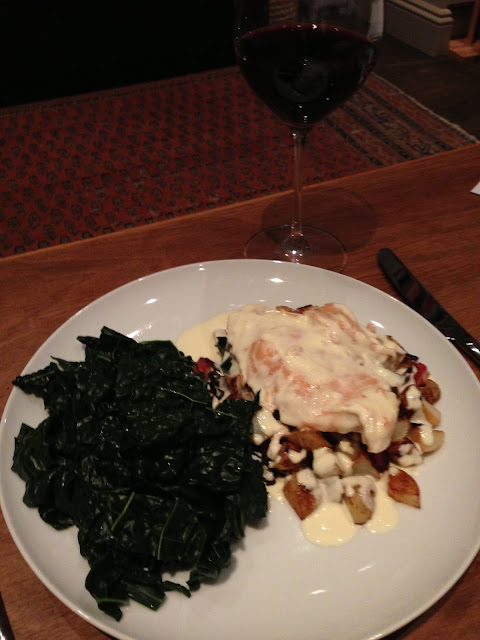 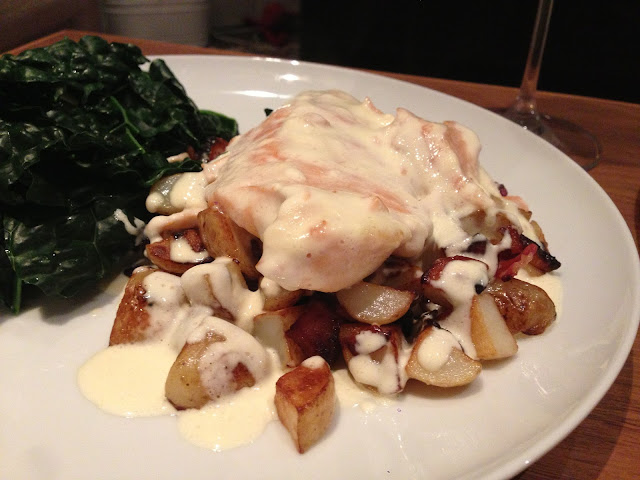