I have been terribly absent of late.  Very naughty.  Very sorry.

One of my (not particularly good) excuses for being absent is that I've recently whisked down to Brighton to watch one of the party conferences in action.  Not especially food relevant, except to say that there's a wonderfully exciting vegetarian restaurant (I know, vegetarian = wrong) called Terre à Terre which has simply got to be tried, and a great little gelateria called Boho Gelato which has some very entertaining flavours.

But enough of all that.  This post is really about pasta.  You'll see why in a sec.
Apart from the papery vol-au-vents and greasy samosas that are handed round at receptions in lieu of canapés, there's not really much to recommend political conferences in terms of their food.  But that doesn’t stop people talking about food.  And in the middle of the conference I remembered a series of Tweets I'd seen over the summer from Ed Balls MP about BBQing. 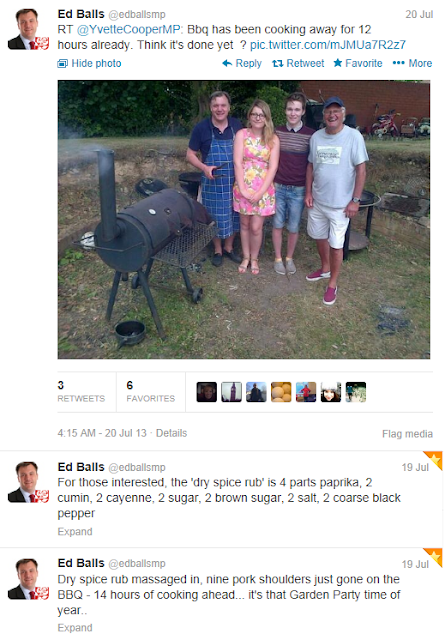 Now, whether you like Ed Balls or not is irrelevant, and I make no comment in that regard.  It caught my eye for one reason and one reason only: How about a post on politicians' recipes?
I scoured the internet, and before long something turned up.  It was a face off of Gordon Brown and David Cameron donating recipes to a charity cookbook.

Gordon's was unremarkable.  What a surprise.

I know this because it's one of my all-time favourite dishes and I've cooked this recipe so many times that I've got it basically by heart.

So I'm going to share it with you too.  Sort of.  Because, having tried and re-tried this recipe from memory so many times, I imagine I'm a little off with the details.  But this should work nevertheless.

x6 decent bangers. (River Café book says specialist Italian sausages, but I prefer to use Sainsbury's red wine and venison sausages, which are brilliant.  Actually, Sainos does some Italian style ones that I've used and are pretty good.)

Pasta (I use Rigatoni.  Because it's aces and I love it.)

1. Chop your garlic into tiny wee pieces.  Chop your onion small too.  Cook off the onion for a bit, then add your garlic, so it doesn’t burn.  Cook until soft and translucent, but not going brown.  No crispy bits wanted here. 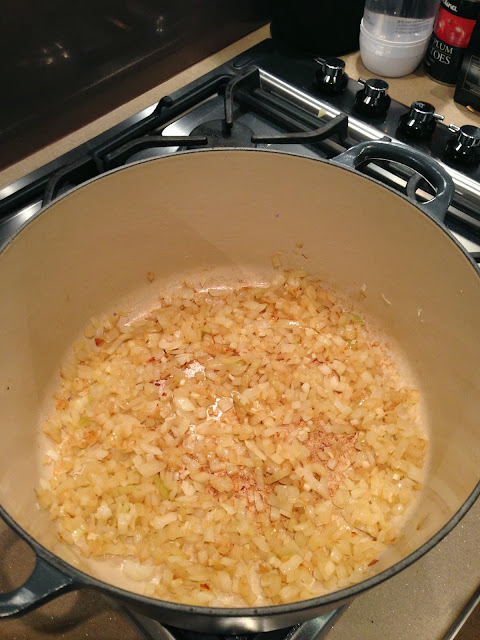 As you can see, I'm using my favourite, massive Le Creusset.  In most cases, you could get away with using a big frying pan or a skillet, but as I'm doubling the recipe I had to go for something bigger.  Just imagine that it’s a big skillet if you're using the pictures for guidance.  Or just double the quantities, because this is bloody marvellous stuff.

2. Skin your sausages.  They start out lovely… 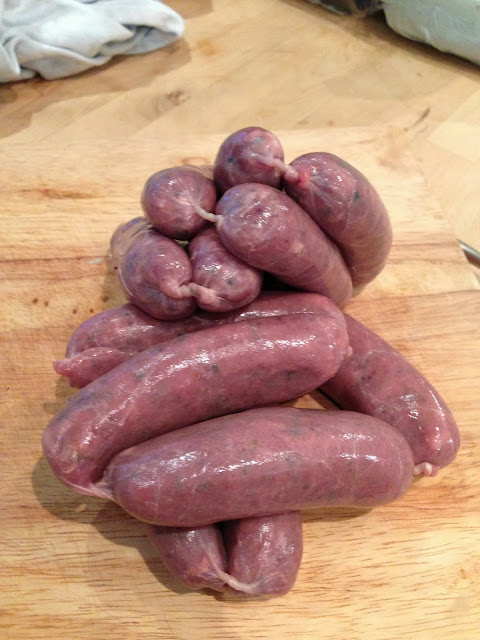 …and end up looking a bit like meaty poos. 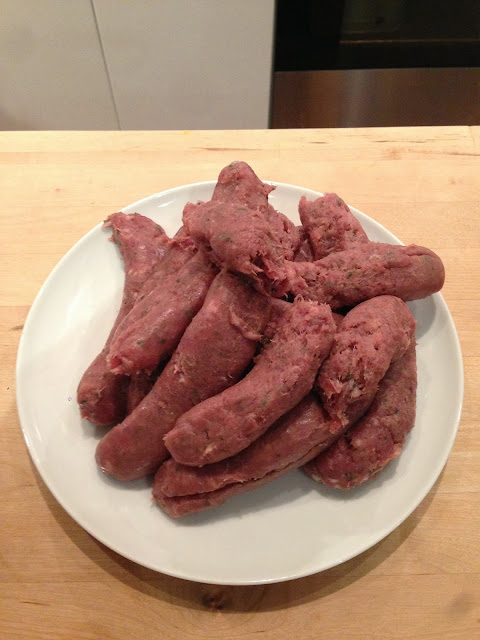 See what I mean?

3. Get the pot nice and hot and add said sausages to the pot Cook the sausage meat right down, until any associated liquid has disappeared, breaking it up into smaller chunks as you go along.  At first, it won’t want to break up, but it gets easier the more it's cooked. 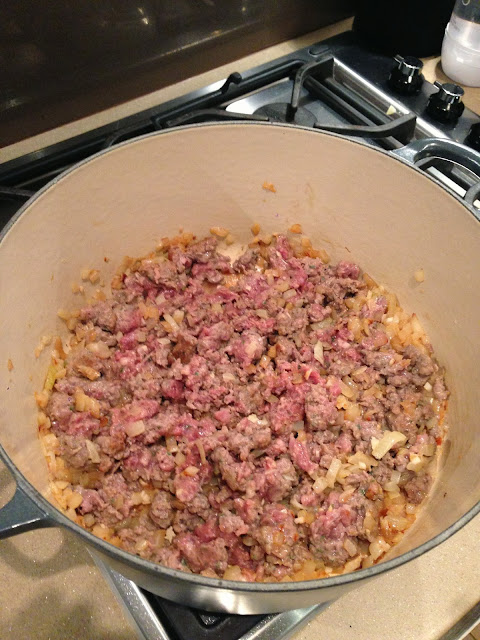 4.  When the liquid has gone, add the chili flakes.  Another alternative could be using a whole chipotle (a type of Mexican smoked chili), but I didn't think about that 'til it was too late.  Now keep cooking the meat until it’s browned and starting to crisp.  This can take up to 15-20 minutes. 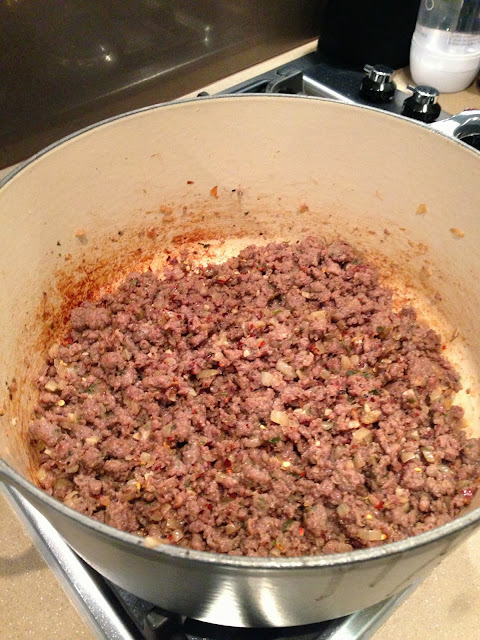 5.  By now you're probably trying to find out where I live.  Because I've given you a recipe and you've followed it religiously, and now you have an amazing amount of crap stuck to the bottom of your beautiful (and rather expensive) enamel pot that you're quite convinced will never come off.  Well, fret not.  Not it's time to add the wine and give it a scrape. 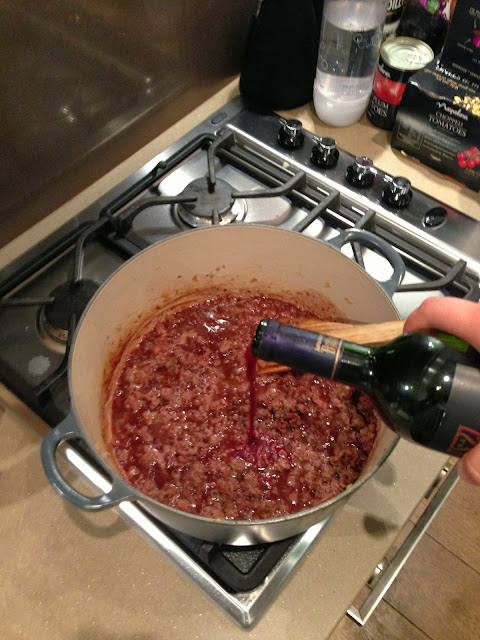 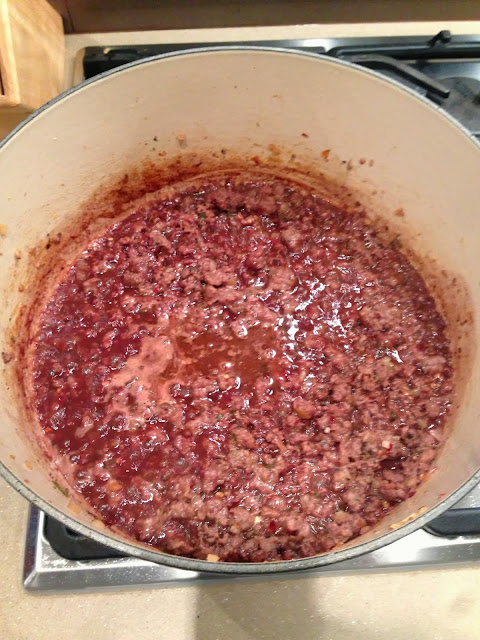 See?  All better now.  Now turn the gas up to full and cook the wine off completely.

6.  Once the wine's gone, add the tomatoes, bring to a simmer and reduce the heat to keep it there. 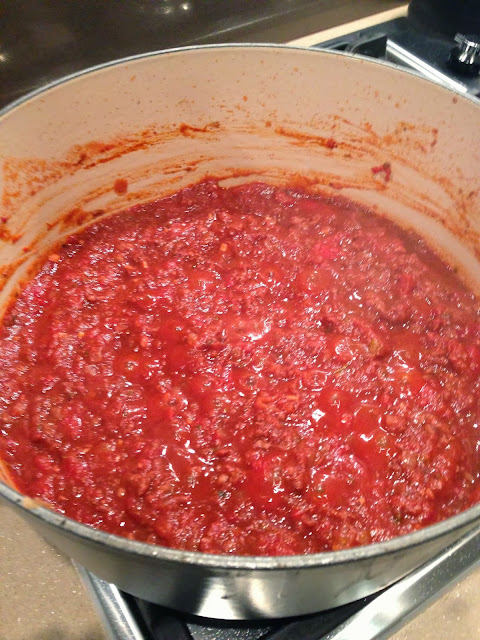 Go and watch the telly for a bit, stirring intermittently, because you want this all to cook right down to a sludge, without it sticking any more (I'm not going to let you add more wine if it does, sorry) and so that the tomatoes have completely broken down into slop.  This takes at least half an hour 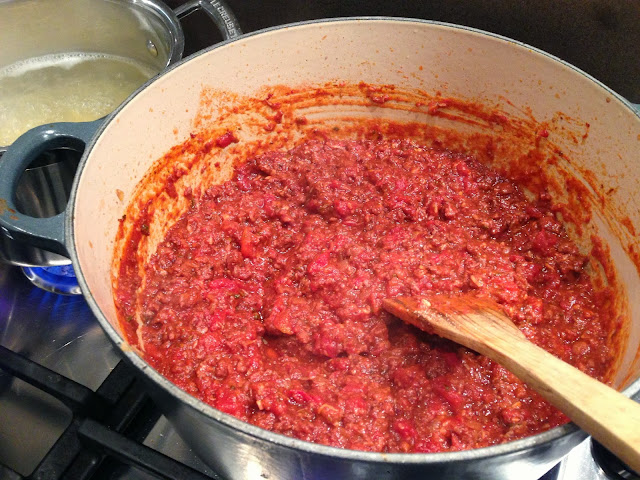 7. Get the pasta on.  Cook to instructions.

8. Add the parmesan and nutmeg and stir stir stir until it's all melted in.  This is why there's no real need to season until now; the nutmeg takes the pepper's place and the parmesan is salty enough.  So now taste and test.  Oh, and take the sauce off the heat.

9. When the pasta is ready, drain and return to its pan.  Add a couple of dollops of sauce and a couple of tablespoons of crème fraiche per person.  Mix it all up.

Just a note: If you add all the crème fraiche to the sauce at this stage, you can’t really reheat it, as the fat in the cream will separate.  If you're going to eat the whole thing in sitting, then go ahead and mix the sauce and the cream together – you'll actually find it easier to mix them without the pasta.  But if not, I'd do it this way around.

And there you have it.  Throw more parmesan on if you like, but I don’t reckon you'll need it. 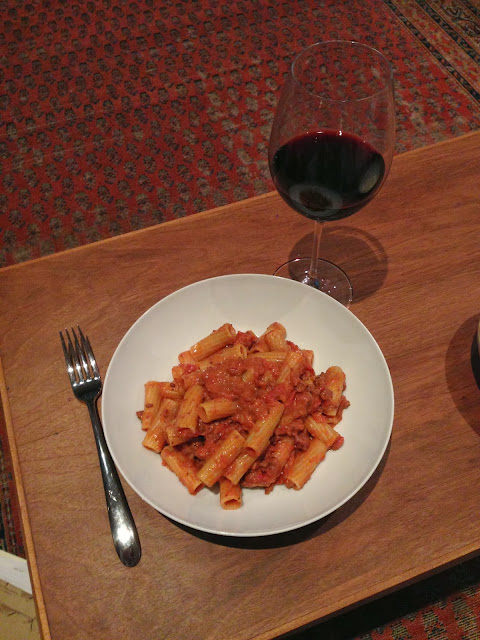