Recently, GrubsterGirl and I have been celebrating some rather special news.  Not that it's particularly relevant, but it is how we managed to find ourselves out for dinner the other night with some old friends.  For weeks – literally, both friend and I are rather disorganised, could not get it together – restaurant recommendations and proposed dates went back and forth.  Then suddenly I found myself remembering that there was a place I had been dead keen on going to for a while: Nikita's. 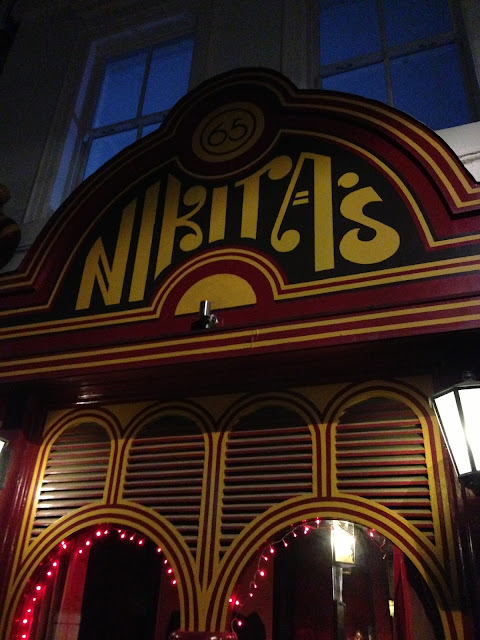 Nikita's is a Russian-themed restaurant.  I think.  No, in fact, I'm sure.  There are a lot of giveaways – the copious amounts of vodka on offer (I counted 32, which is more types of vodka than I actually thought existed), the Russian folk music, the caviar, or the Russian Orthodox Church themed bar.  No, really, they have a Russian Orthodox Church themed bar. 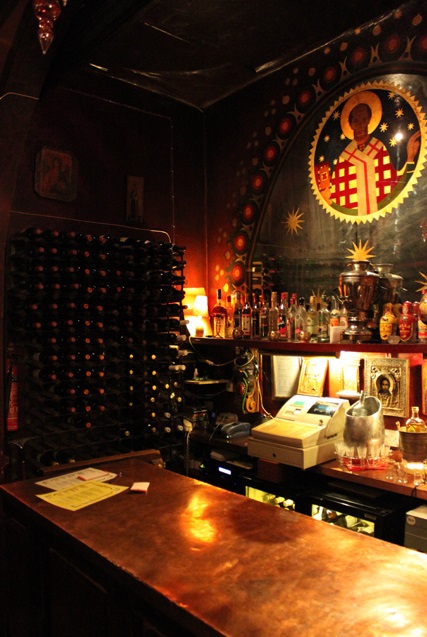 Much fussing and debating was had about drinks to start.  Eventually it was held that vodka was a requirement (it would feel churlish to go and not have vodka) and a carafe of the Krepkaya was ordered up – not realising, of course, that we had requested a pretty lethal species of the spirit.  It arrived, in all its glory, encased in a full-on block of ice, the restaurant's particular party trick. 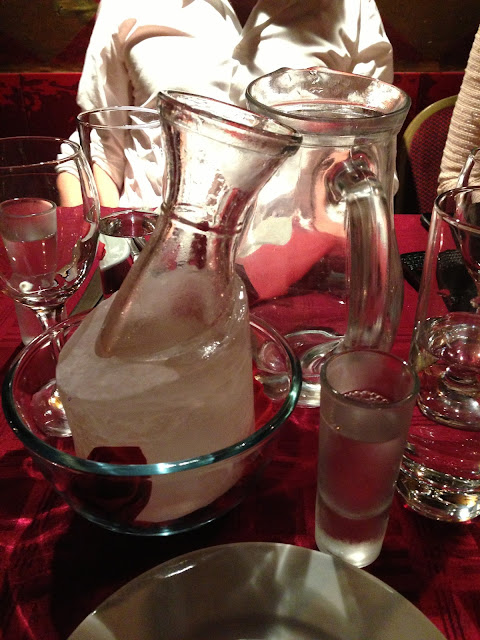 To accompany our food we also ordered up a bottle of Montenegrin 2007 Vranac.  Yes, actually.  But again, why wouldn’t you, in a Russian restaurant?  Well, it turns out that there are a number of reasons, actually, but the best being that we could have achieved much the same effect if we'd just ordered a bottle of Ribena – in terms of colour and taste.  It's not hard, I'm afraid, to guess from this wine why Montenegro hasn’t gone on to dominate the international wine market.

For starters, I had pirozhki (пирожки) – little pastry pillows, some stuffed with sausage meat and others stuffed with spinach and cream.  Nice enough, if rather bland. 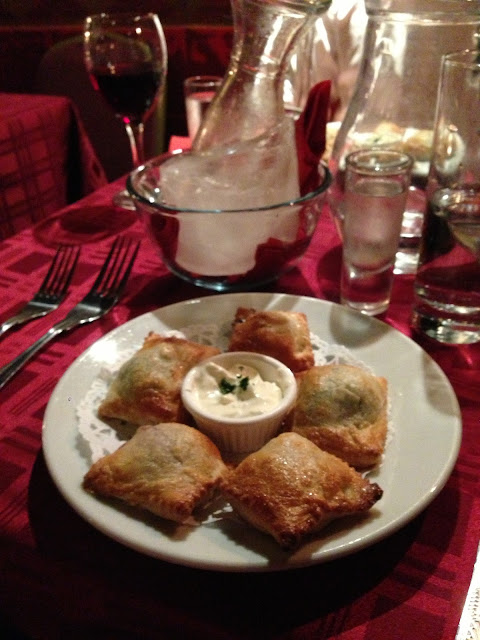 GrubsterGirl ordered herself pelmeni (пельмень), which is described on the menu as "traditional dough parcels filled with fresh herbs and minced meat, served with sour cream and buillon soup".  In fact, I was on the cusp of ordering the same for myself, until I had vivid flashbacks to a 2001 trip to Moscow during which, at the equivalent of a cream tea, I bit into an attractive looking donut that turned out to be filled with watery, stewed cabbage.  Trust me, that sort of thing puts one off experimenting with any Russian foods described as "traditional dough parcels filled with…"
What arrived was far from a cabbage donut, and appeared (as you can see) more like tortellini.  Still, again nice but bland. 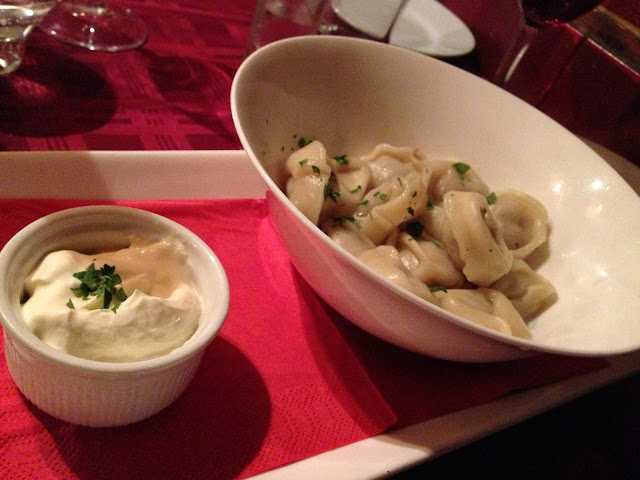 For mains, GG attempted the govjazhij farsh s komponentami.  Try saying that clearly after a couple of slugs of overproof vodka and Montenegrin wine.  Don’t worry, she didn’t try to: it's basically steak tartare, which is how she ordered it.  Not the most Russian of dishes, I hear you cry?  No, but it was Anna Pavlova's favourite – not, in fact, the eponymous pudding. 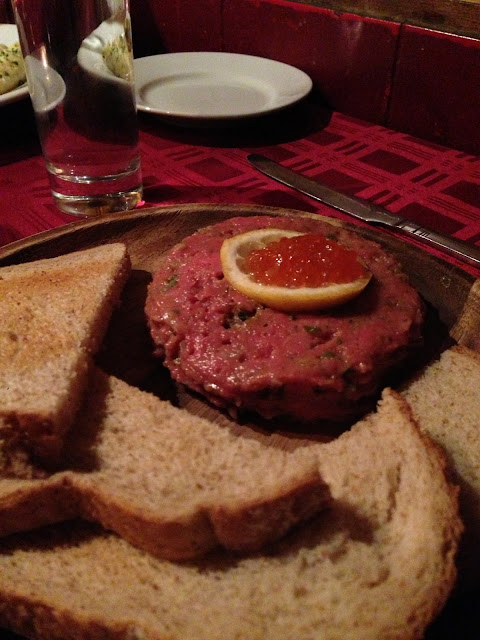 Establishing a general theme of the food, the tartare was nice enough without being anything special.  And, as the picture shows, it was served with Hovis – no speciality bread or carefully sourced loaf here.   I felt slightly disappointed – an attempt to source some Russian black bread or sculpt a blini might have been a nice tough.  But, then again, perhaps there's something rather (stereotypically) Russian about that – all the luxury (steak, caviar, vodka) in a rough and ready style, without the finishing touches.

What's more, my own main, I'm pleased to say, departed from the norm to which I was becoming accustomed.  I recalled visiting Novosibirsk (capital of Siberia, no less) a few years back for a conference, during which time my fellow delegates and I were whisked around town in a motorcade, taken to expensive restaurants, fed and watered almost endlessly, and generally fussed over.  At one meal, about three quarters of the way through the week, I tried to refuse food.  VERY BAD FORM, it turned out, and so I tried to order the lightest thing on the menu: a pancake filled with chicken livers with a cream sauce.  (It speaks volumes, I think, about the style of food we were eating that that was the lightest option).

The result was pure heaven, and still one of the best dishes I have ever eaten.  So when I saw something vaguely approaching that on the menu – described as "best fillet steak, wrapped in a light pancake, served with a mushroom, onion, and red pepper vodka sauce" (I just love that it's described as "best fillet steak'"  Say it in a Russian accent and you'll get what I mean.) I simply could not resist.  And it was fantastic.  Soft, tender fillet, doused in a rich, mushroomy sauce topped with its pancake.  You'd think the pancake wouldn't work, or might be an unnecessary addition.  You’d be wrong; it adds a certain je ne sais quoi that shouldn’t be missed.  Govjazhij stejk v souse (meaning, I think, fillet steak and sauce, which is a pretty accurate description as these things go) it had to be. 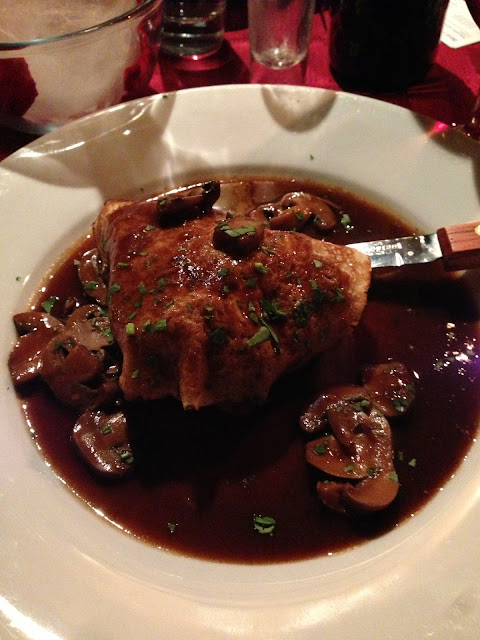 Pudding, however, was a reversion to form, or even a slip.  For me it was apple strudel, really as plain as plain can be. 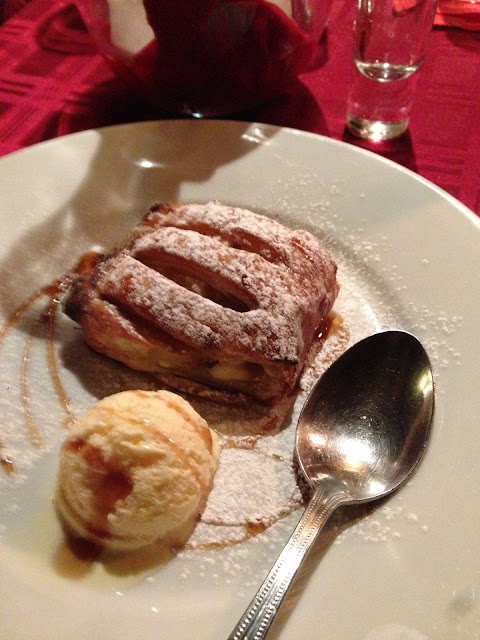 GG's pudding was that famous pavlova.  Now, I'm not actually a kitchen tyrant that demands making everything from scratch – in fact, I have a great pavlova ice cream recipe that frankly insists on pre-made meringues.  But, seriously, in a restaurant such blatant piling of Asda's finest is cutting it a little high. 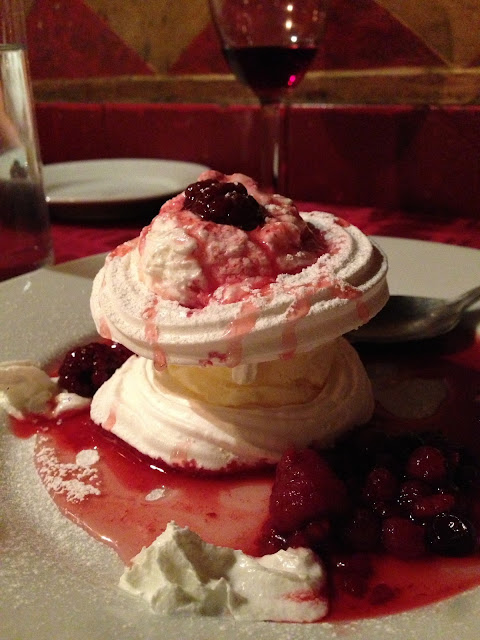 All round, I liked Nikita's it's kind of hard not to – it's not about the food, which is pretty average, to be honest, it's about the atmosphere.  It's about the fun, the booze, the down-at-heel luxury, the Russian staff who can’t understand a word you say, the faded majesty, the over-the-top setting, and the crazy, drunken accordionist, Roman Yuchenko who's the spitting image of Teddy Heath and who serenades you throughout dinner.

Would I change anything?  Yes, one thing: I'd go with a huge gang of friends.  More vodka, more noise, singalong accordion-ing, the works.

Tucked away in a residential backstreet in Brompton, on a street that a young Tony Blair used to live, no less, is a proper gem.  But it's more a party gem than a dinner for two gem.