A little while ago, GrubsterGirl and I hit the streets of Barcelona for a weekend of culture, architecture and art.  No, seriously, I just went for the food.


One of the little things they had, which I had not previously come across in Spanish cuisine before, was pintxo (pronounced 'pincho'), a kind of tapas on big cocktail sticks.  They were good enough, but I can't honestly say I thought any more about them.
Until, that is, I was invited to go to Pix.
Back here in London, Pix is a Spanish bar specialising in pintxo, essentially by laying out a range of different mini eats, each skewered awkwardly with a giant cocktail stick of differing proportions.  It's quite a clever little system, albeit incredibly basic: small sticks = £1.95; big sticks = £2.95.
The range is good, and it's all nice food.  The casual grubster runs the gamut of stuffed peppers on sticks, seared tuna on sticks, iberico ham and manchego on sticks, Spanish tortillas on sticks… you get the general idea. 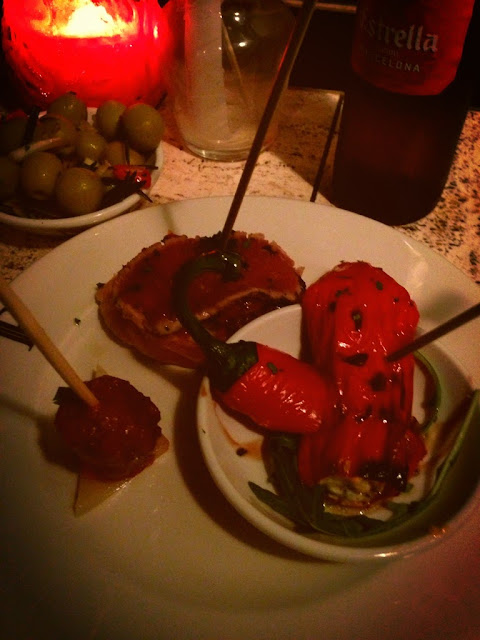 I was pleasantly pleased with my meal.  I ate a healthy portion, all of it tasty and enjoyable, and the bill was far from expensive.  Generally very good, and I can imagine a fantastic place to go for a pre- (or even post-) theatre bite to eat.  We washed the whole lot down with Estrellas, but there's plenty else, including lots of Cava (in true Catalan style), a decent array of cocktails (albeit rather standard) and even a few sherries.
Just one thing: If you're meeting at the restaurant, make sure to agree with your companion which one you're meeting at – they have two branches quite close to one another… I ended up going to one restaurant, and told the chap at the bar I was meeting a female friend who would be on her own.  He proudly showed me to my table announcing to the lady that "her date" was here.  Looking up at a complete stranger, she looked suitably terrified.
- GrubsterBoy -
Posted by Grubster Boy at 15:42