This is completely cheating because I basically wrote about this place about a year ago and now I am writing about it all over again.  But I have three reasons why I shouldn't be criticised for doing so, which I think are pretty valid and compelling:

So with that in mind I am now going to write a lot about Tapas 24.

Basically, I was in Barcelona for a work thing, which ended on the Friday night (technically, Spain being Spain and keeping very Spanish social hours, it ended on the Saturday morning).  We had a preferential rate on the hotel if we wanted to stay on so I said GrubsterGirl that she should come and join me and we'd make a weekend of it.  She agreed on one proviso: we went to Tapas 24. 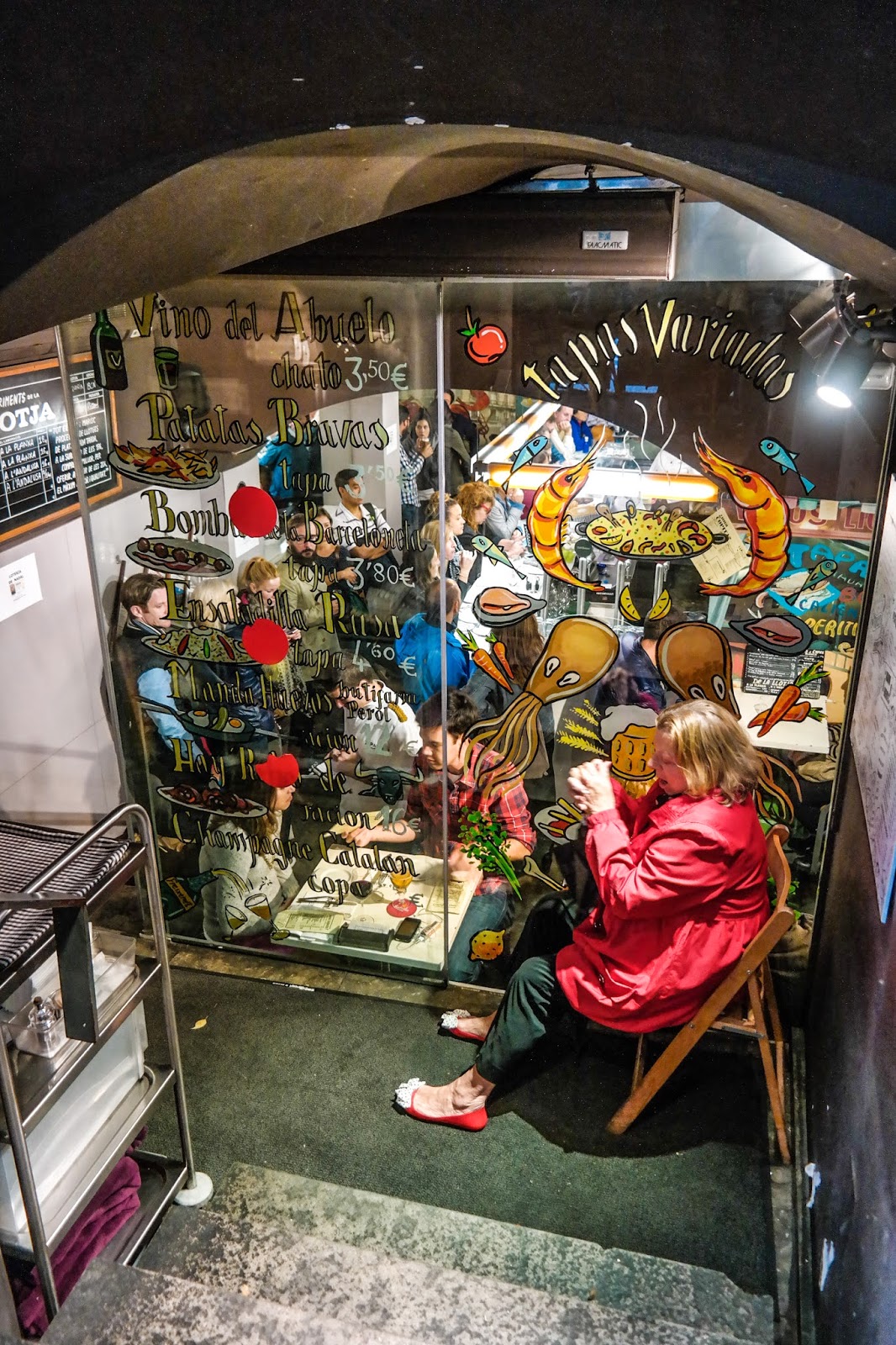 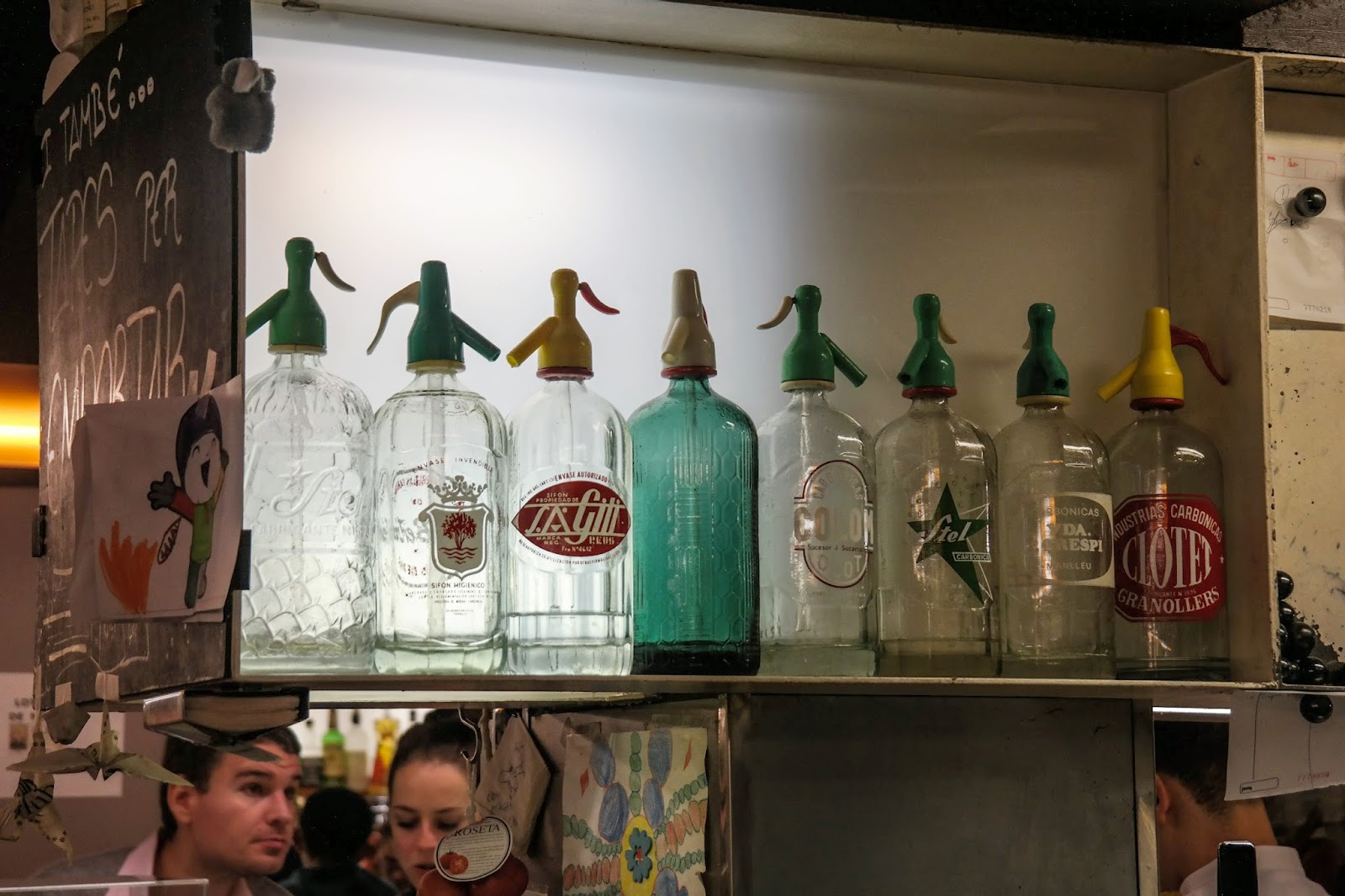 Tapas 24 is run by Carles Abellan, a former El Bulli chef, so it's a fair guess that he knows what he's doing.  We timed it right this time and managed to bag a seat at the bar during the peak lunchtime.  Operating out of a tiny kitchen hardly much bigger than a toilet cubicle, these lads knock together some of the best tapa I have ever had the immense pleasure of sampling. 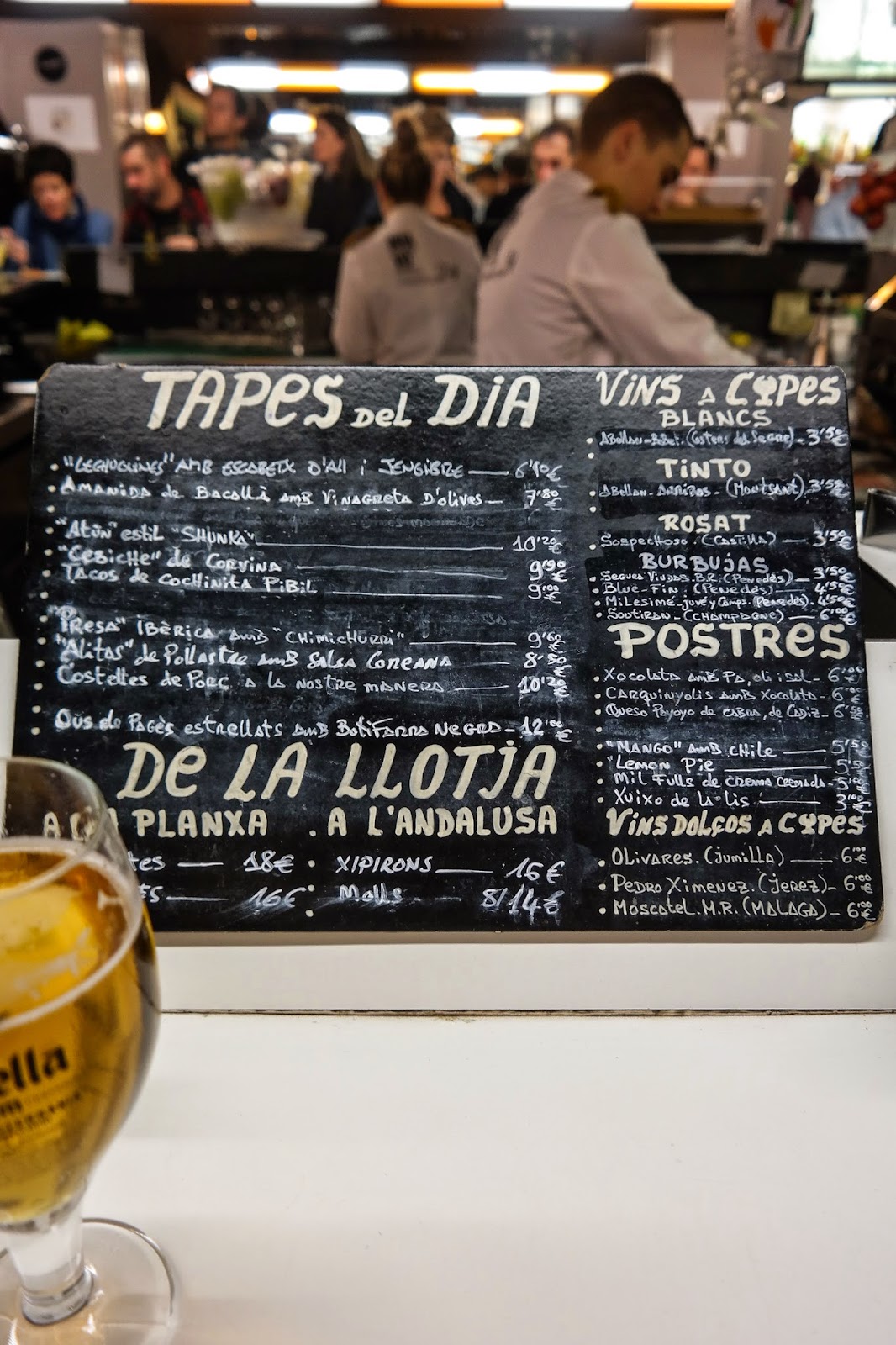 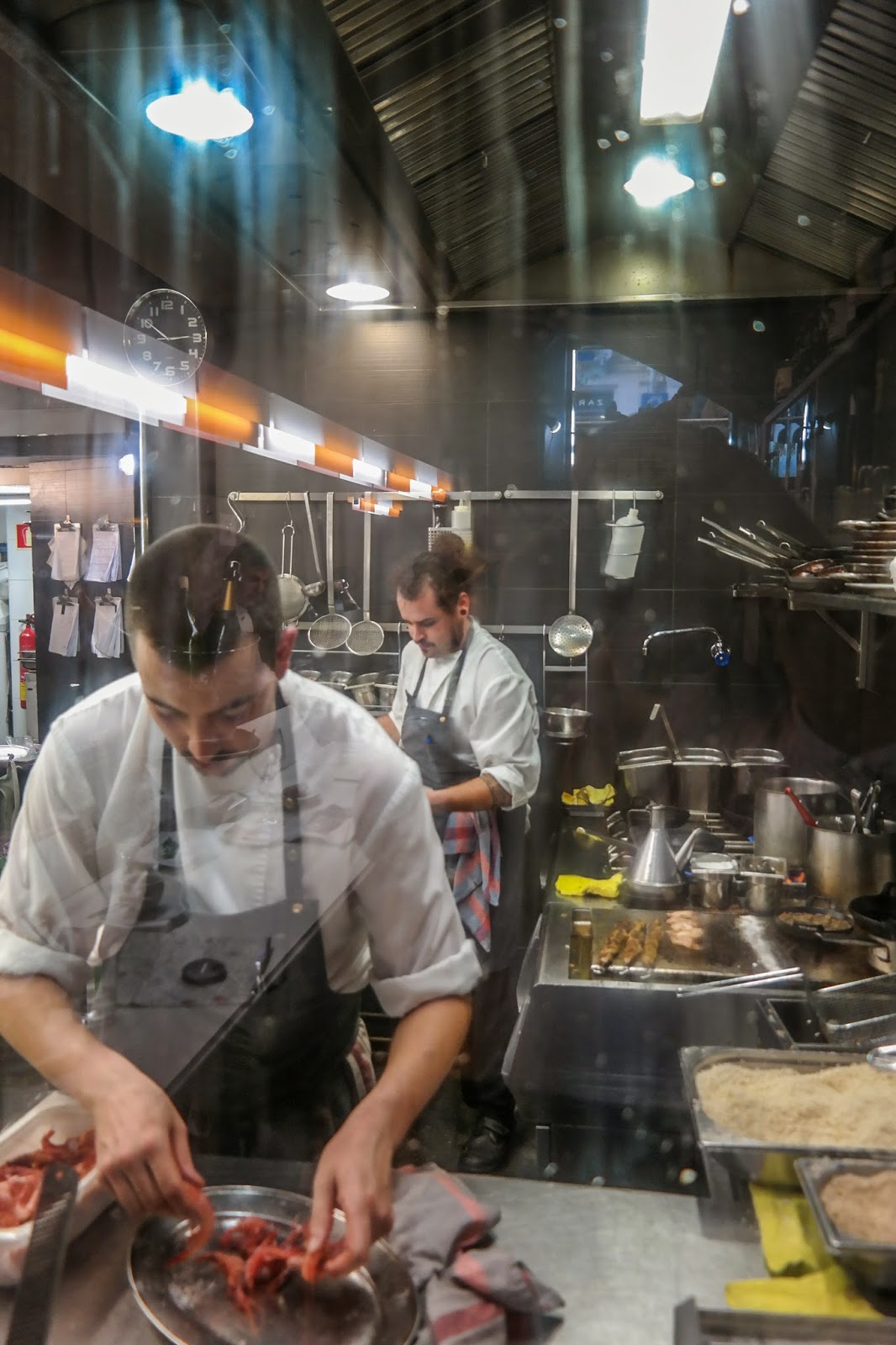 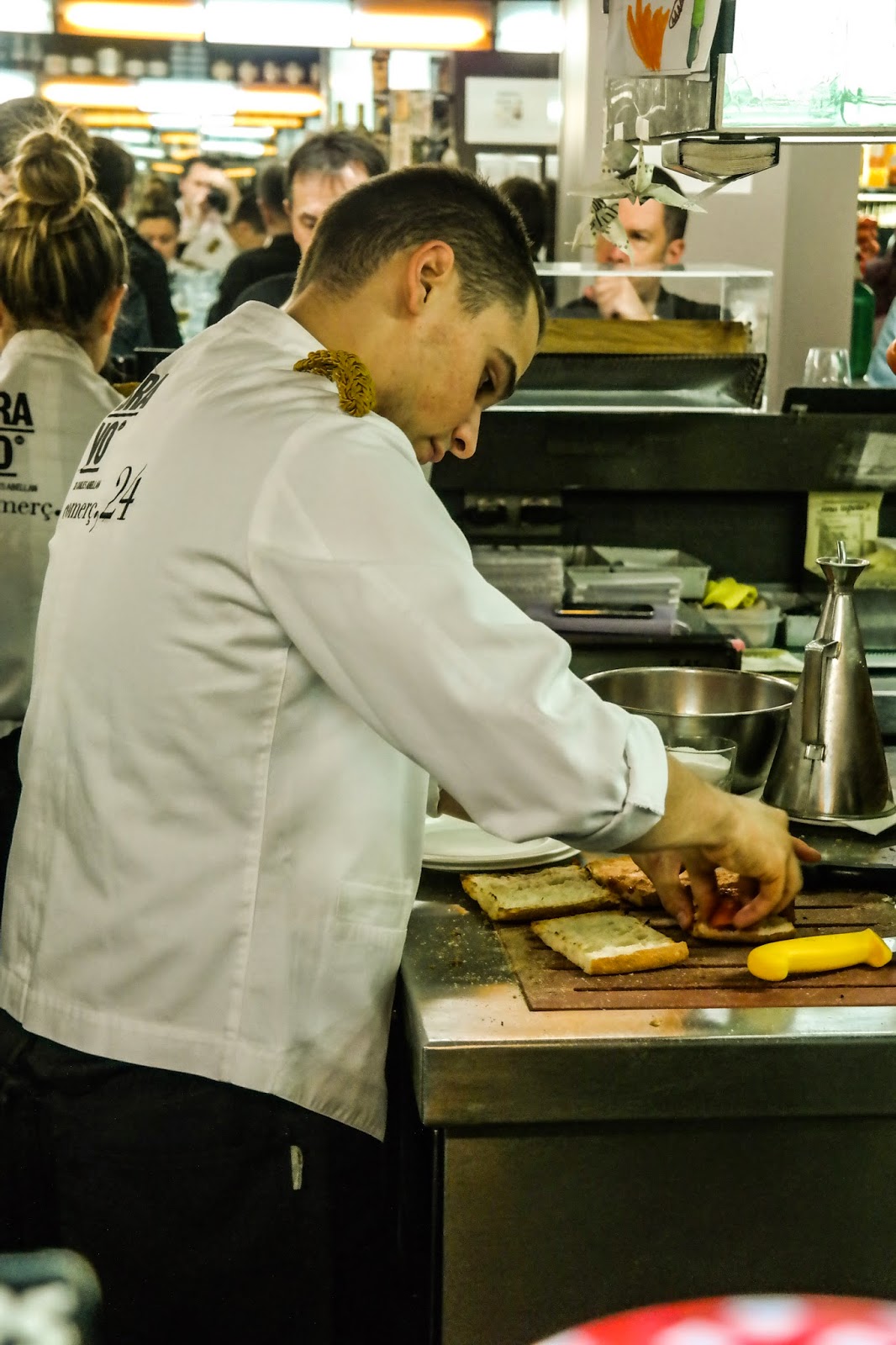 We kicked off the proceedings with a couple of croquettas, as you do (it being Span and all).  They were good – and as freshly made as you're ever gonna get them – literally, we watched them being made and going into the fryer from where we sat.  But, frankly, Tapas 24 has so much else in store I'd recommend looking elsewhere on the menu. 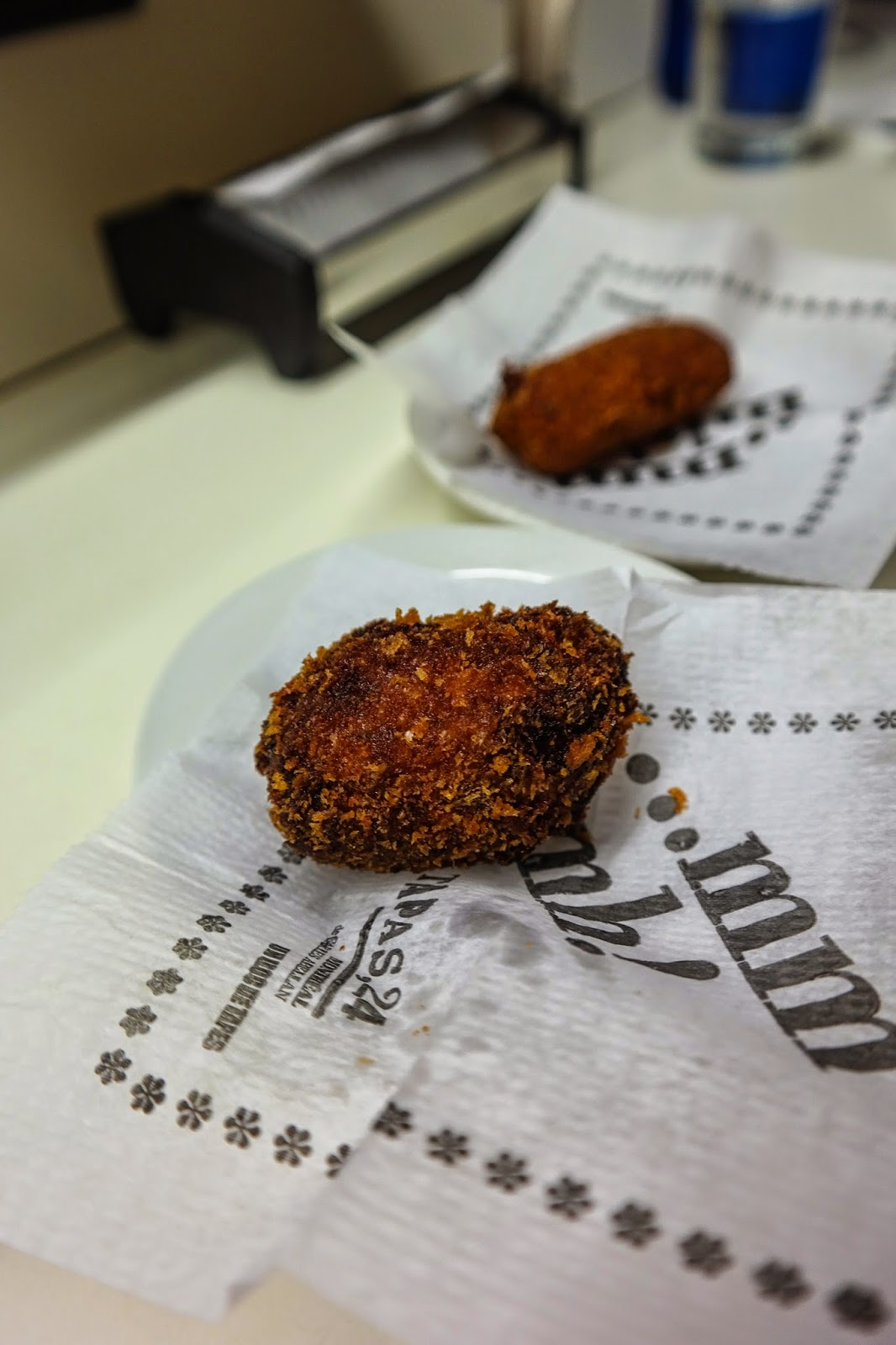 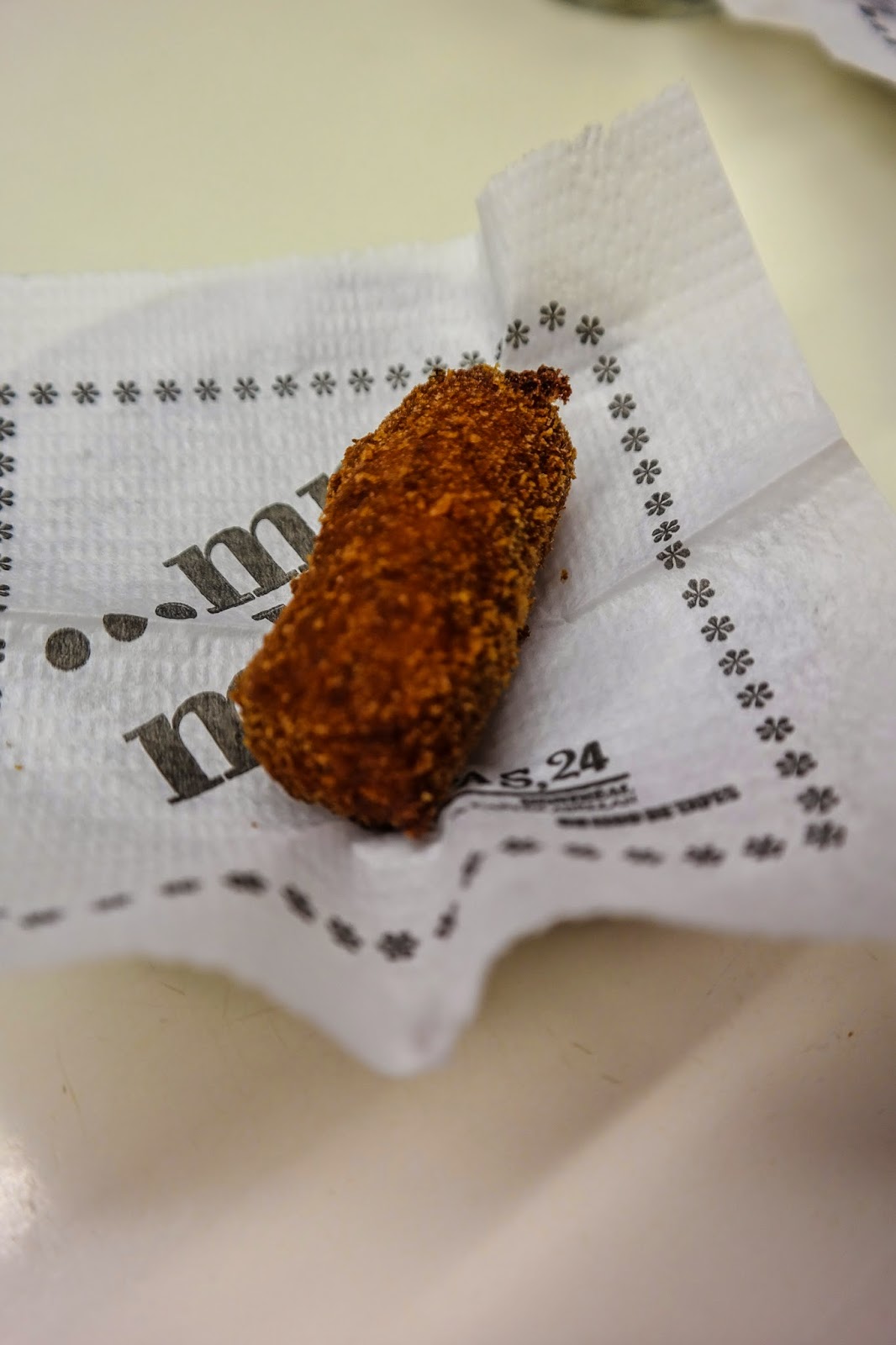 Next up was the bikini sandwich. 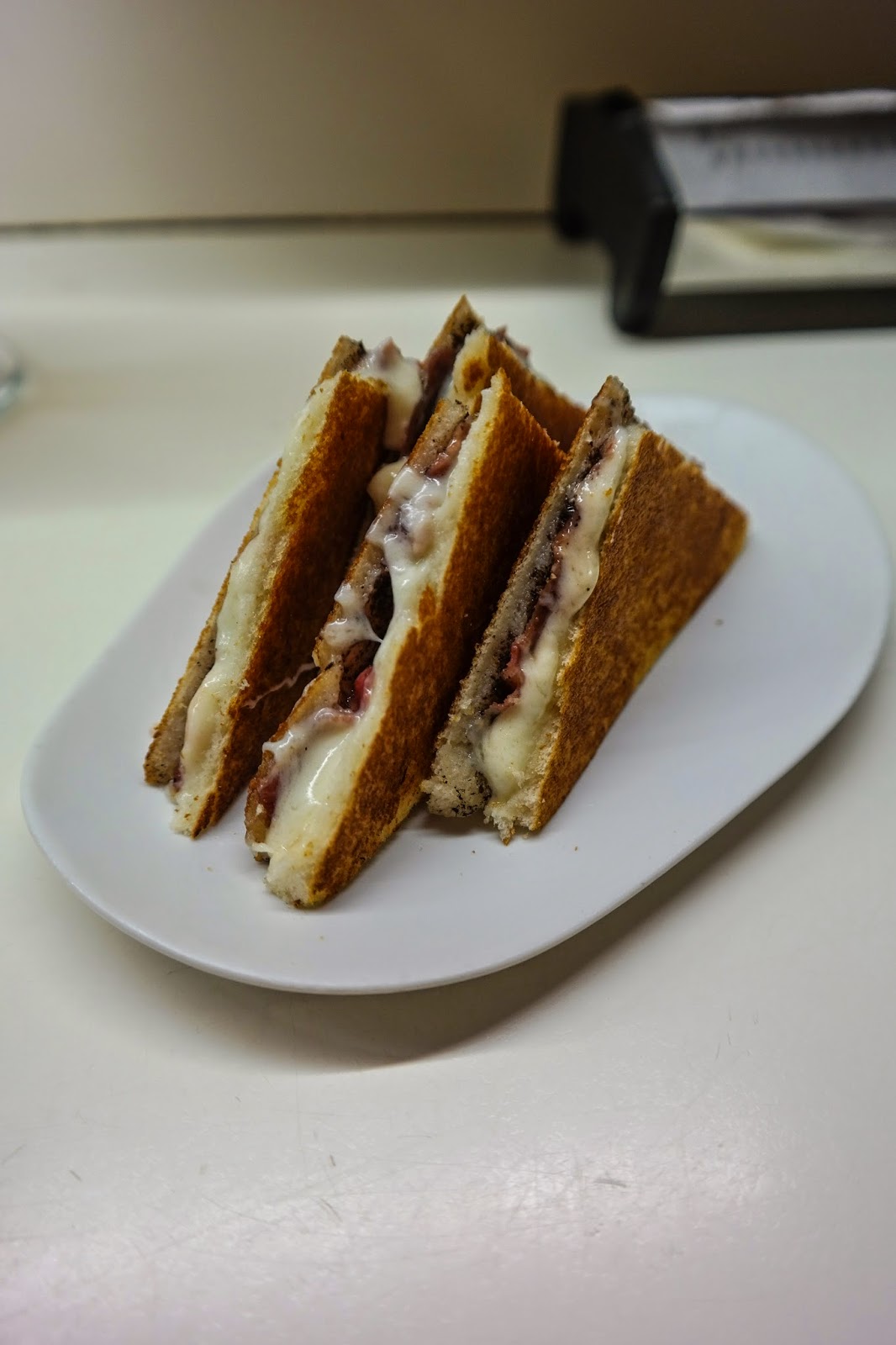 Now, this is a quandary.  It's immensely popular in Barcelona / Catalonia but seems to be utterly unheard of elsewhere in the world.  And that's the quandary part, really, because it's bloody luverly.  A combination of soft, mozzarella-esque cheese, Iberico ham and black truffle, squished flat by a heavy toastie maker and baked so that the cheese oozes and the truffle mingles.  It is quite simply a work of art, and undoubtedly the best sandwich I have ever, ever had.  Better still, I now understand that Tapas 24's contribution is amongst the sandwich's finest examples.

Moving on to the more substantial dishes, there was a plate of corvina ceviche (corvina being a kind of salt water fish that's a little like trout). 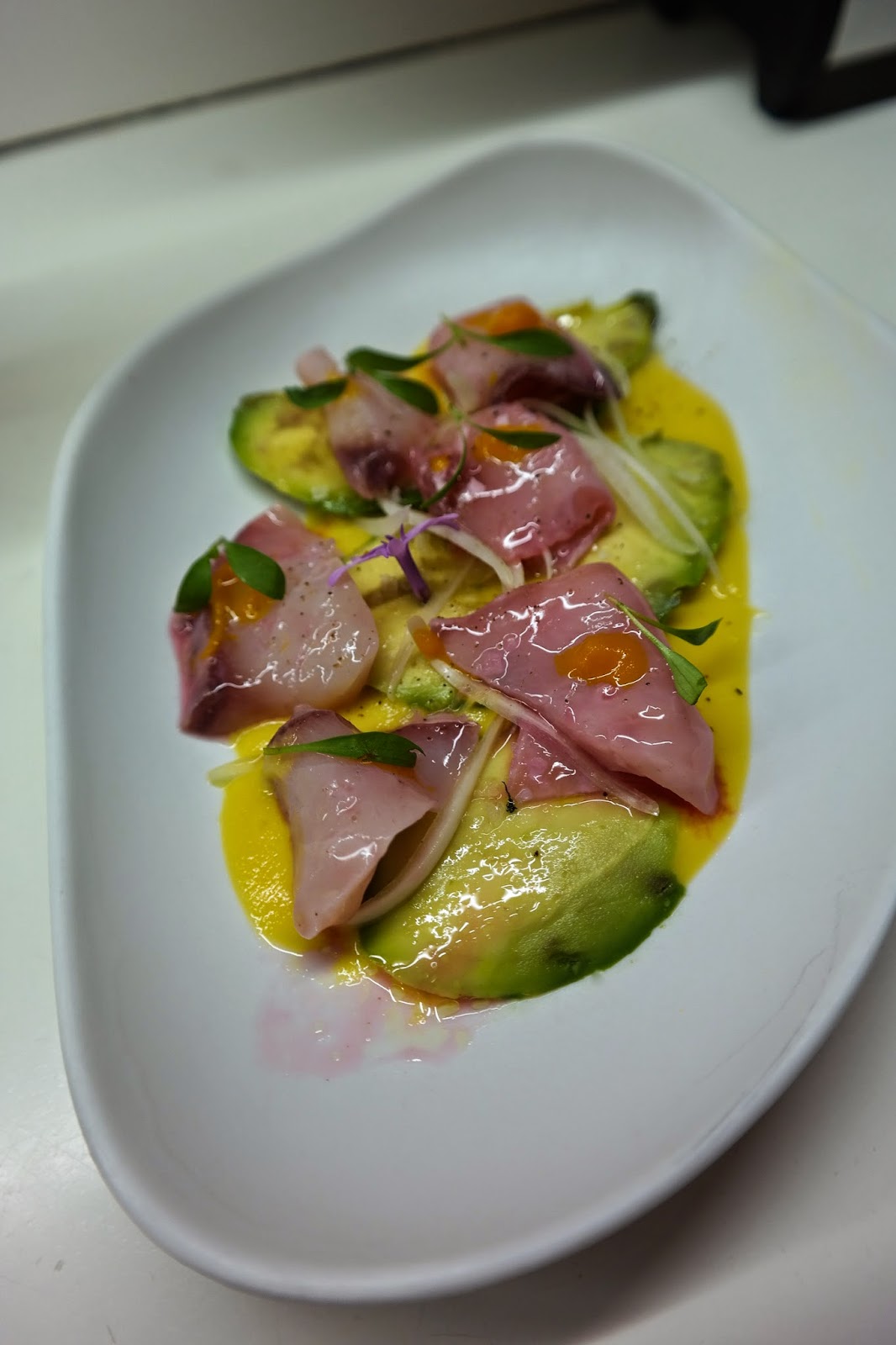 This was delicious – absolutely fantastic, it managed somehow to be both immediately similar to a run-of-the-mill ceviche and be something unique and unexpected.

We also had the Iberico presa pork. 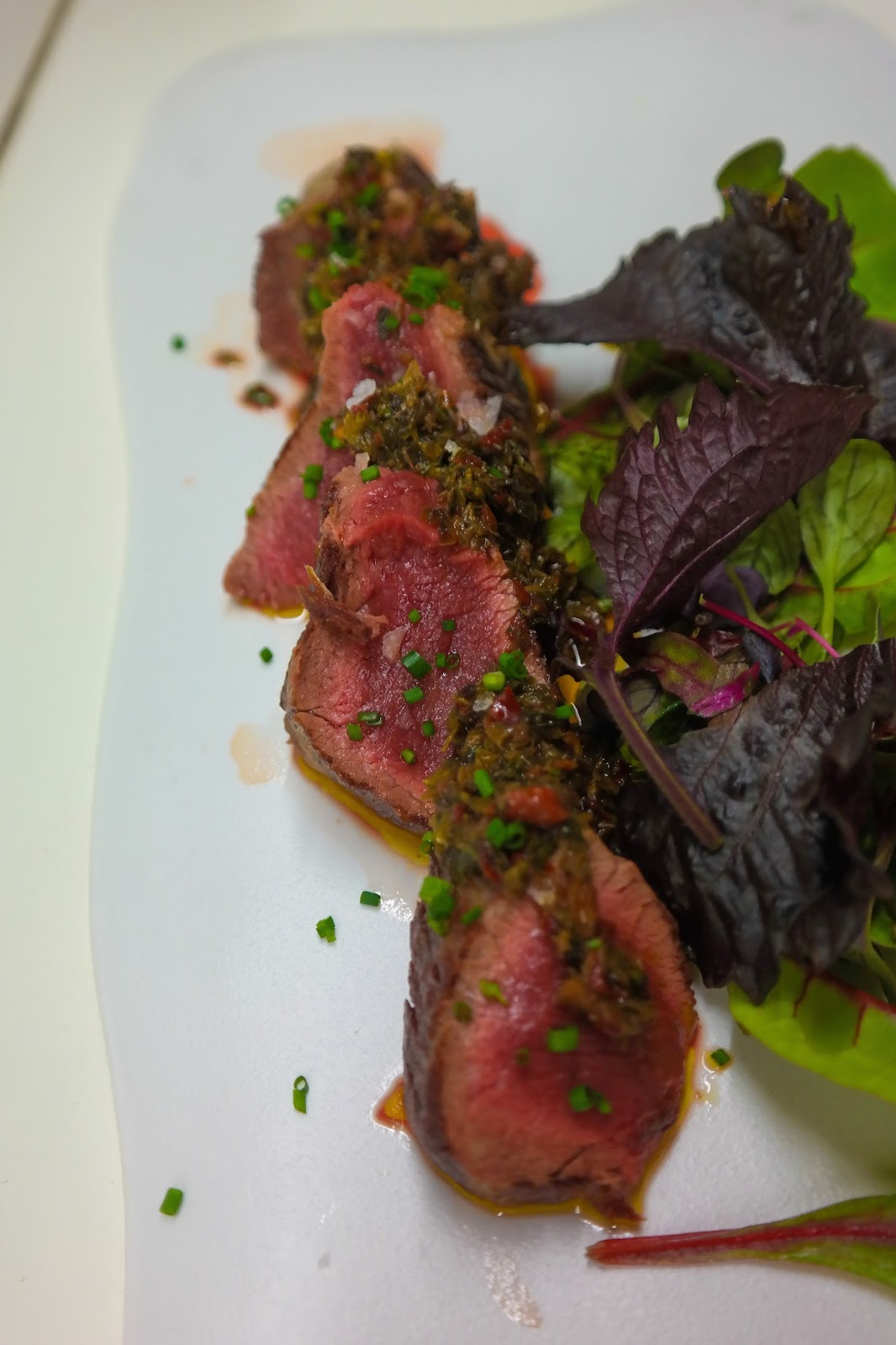 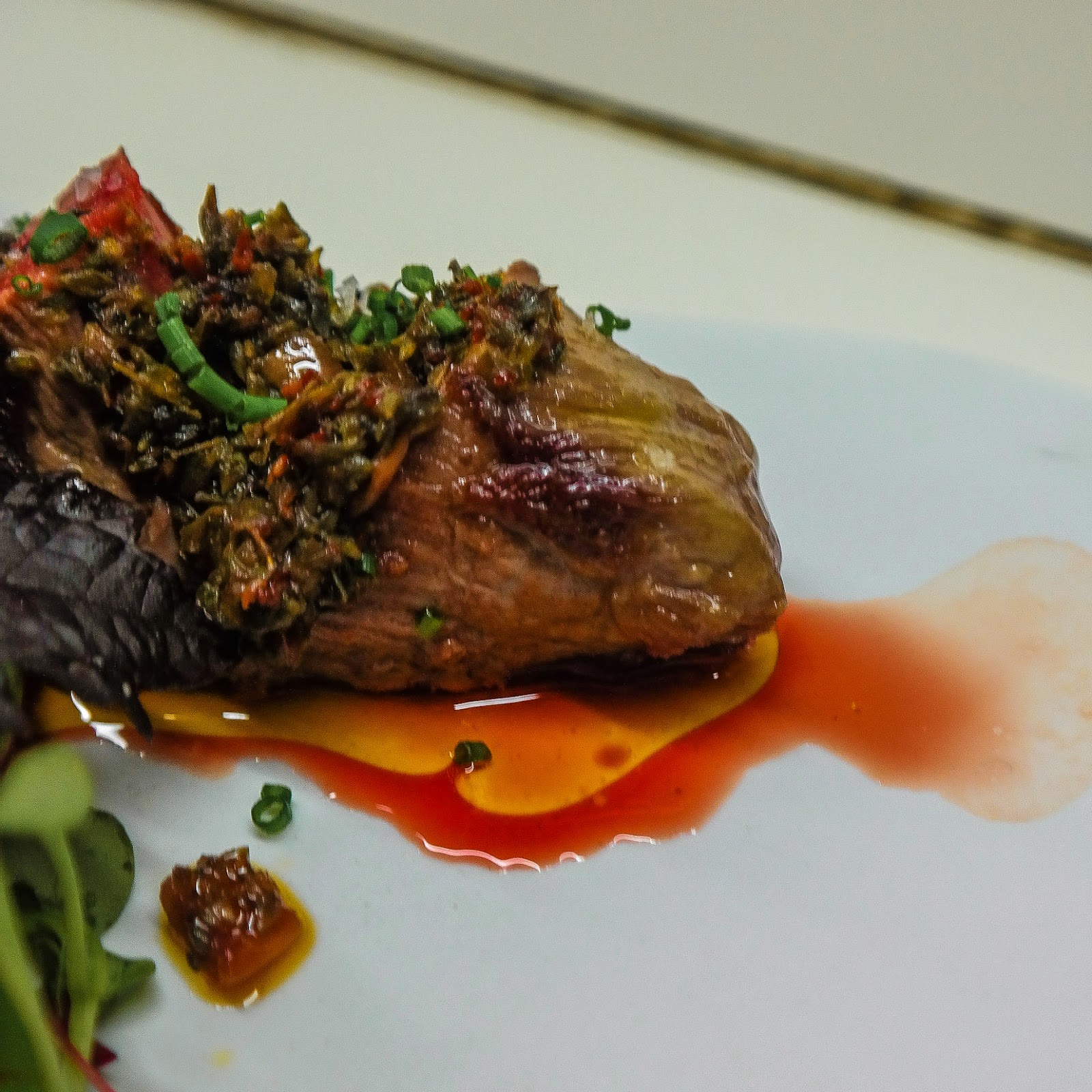 Presa is the end of the loin, at the neck, and is regarded as one of the finest cuts of meat from the pig.  Because of the quality and responsible rearing of the meat in Spain (and, I expect, in particular from their personal suppliers) you can have your presa rare, as opposed to the well done form in which all pig meat in the UK comes. This one was served Argentine style, with a chimichurri sauce full of herbs and spices.  Another definite hit (albeit not quite reaching the gargantuan heights of the ceviche).

For pudding we had the mango and chilli. 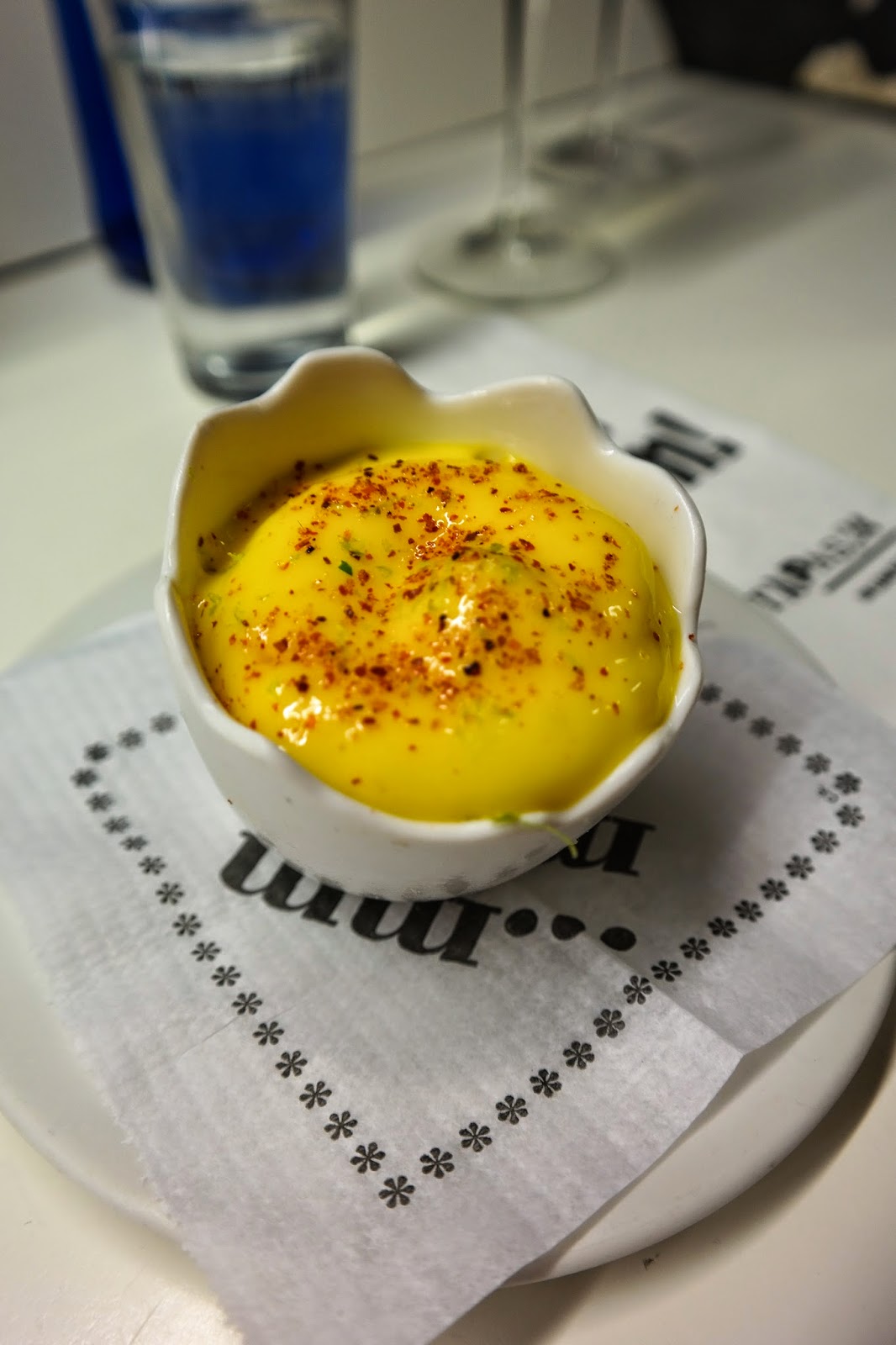 Another wonder, the range and matching of the flavours was intense.  A mango flavoured foam with lime zest stirred through it, topped with crushed chillies – it had it all.  But then, the surprise at the bottom was the lime grantia - slightly effervescent, almost pétillant - that just brought it all together.

But perhaps the star of the show – and possibly Tapas 24's signature dish – was the chocolate. 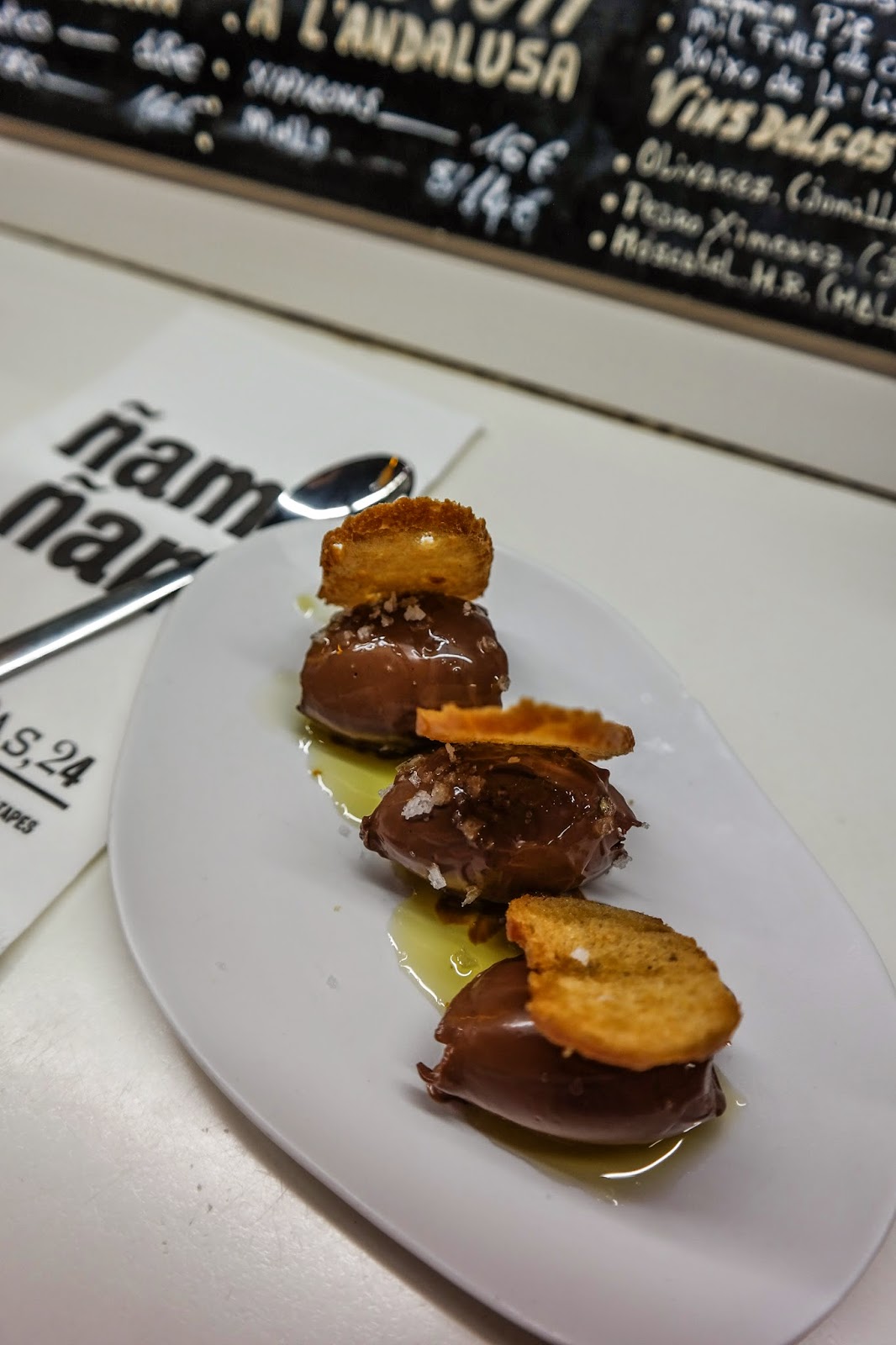 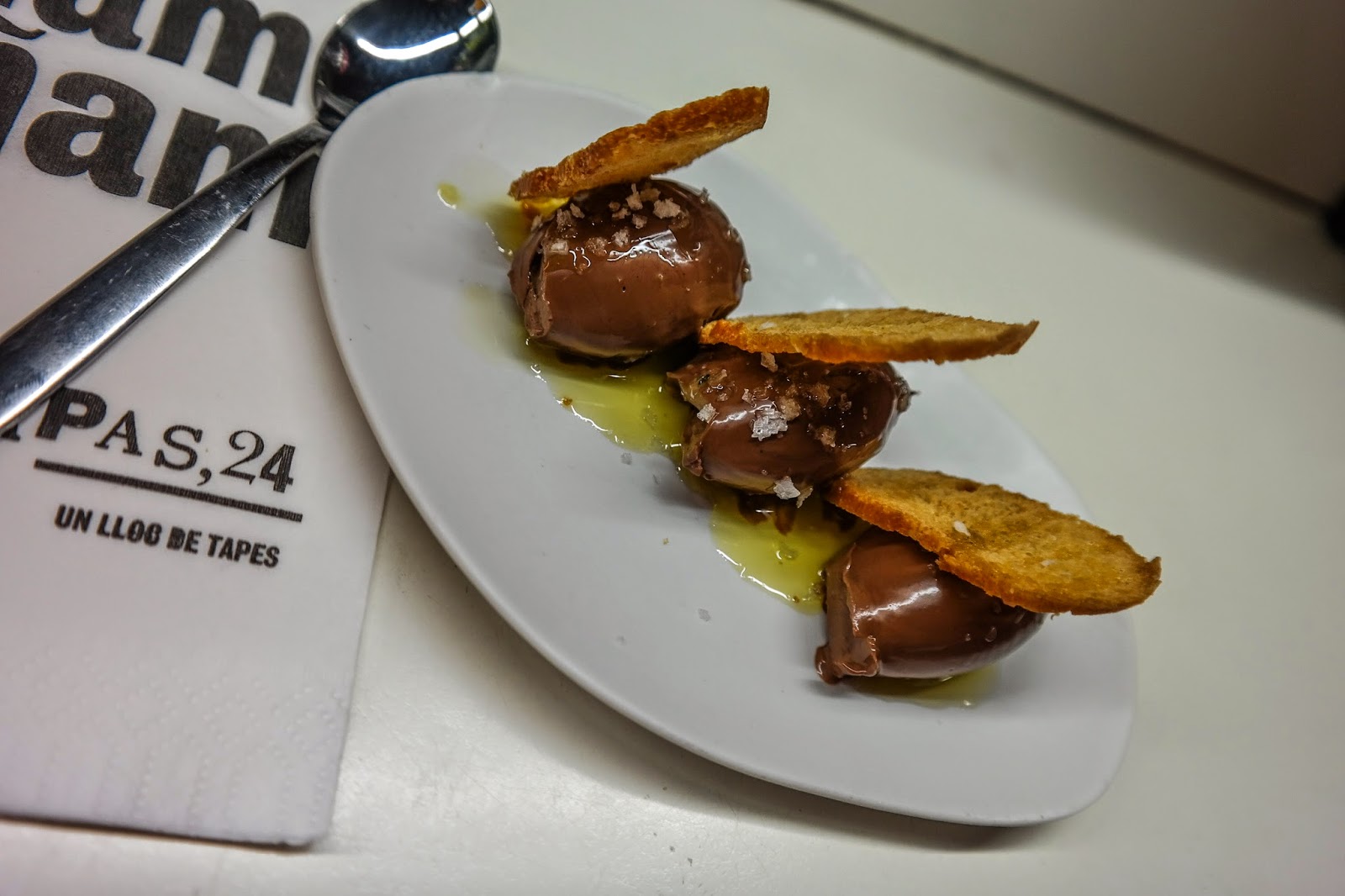 It's basically a beautifully smooth, heavy moose – almost unmoussey altogether, a thick chocolate cream perhaps – served with olive oil, sea salt and crisped bread.  I have almost no words for this.  The combination of a really fruity, peppery green olive oil and the chocolate, intensified by the salt, was extraordinary.  This is quite possibly the best pudding I have ever had, and definitely amongst my all time, top ten favourite dishes.  Superb.

One of the great things about Tapas 24 – and you've probably figured out by now that I think that there are a lot of great things – is the bill.  You've had food cooked for you created by a man who learned to cook in what was, at the time, the greatest restaurant in the world.  But it is far from bank breaking.  Whenever I've been asked over the last year or so where's good to eat in Barca, I always say here.  On this recent visit I was proved right.