Visiting Singapore, my friend said that there was one thing I absolutely had to do (food-wise, at least) before I left: eat crab, Singapore style.  We headed down to Jumbo Seafood to give it a whirl. 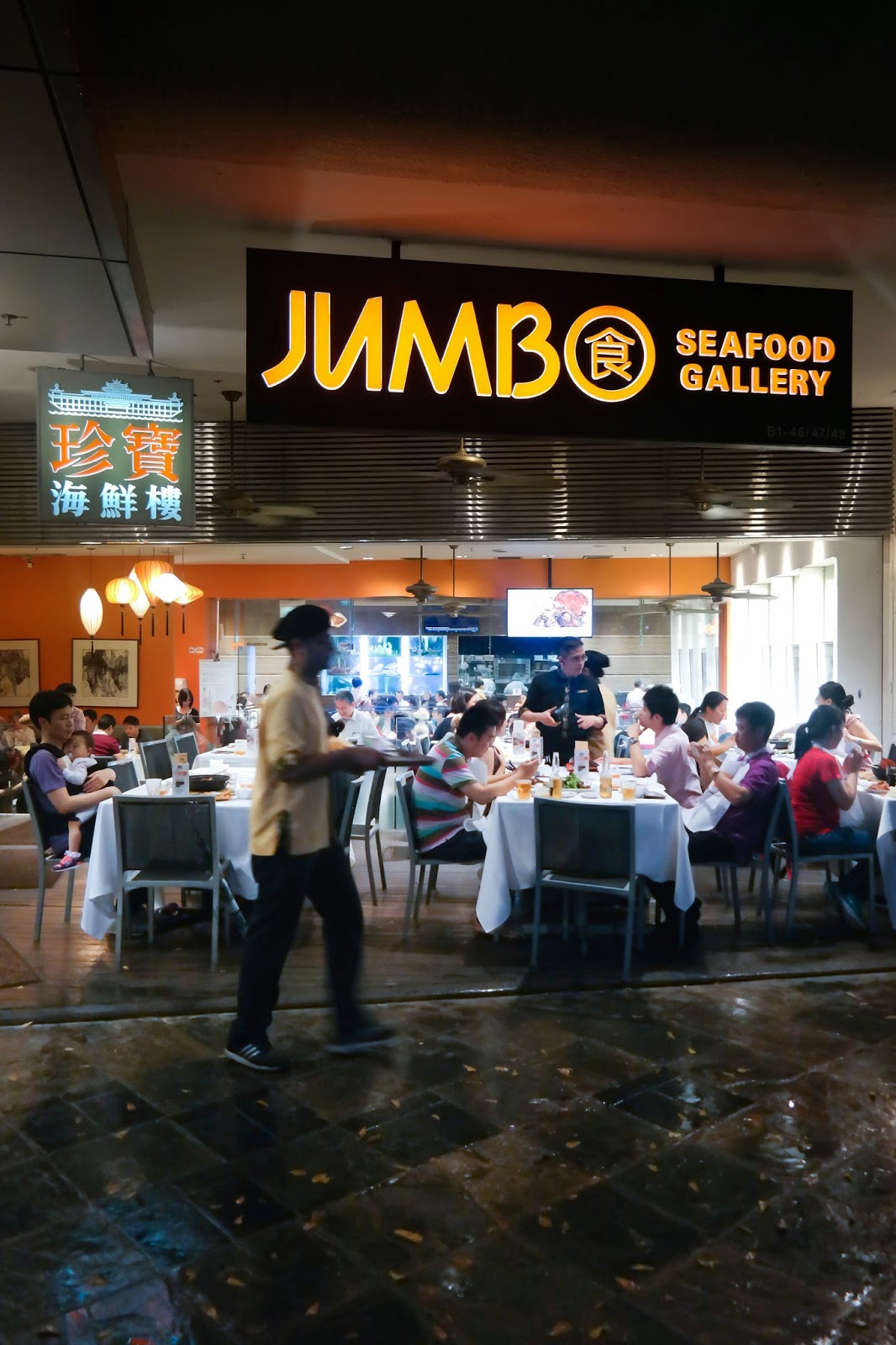 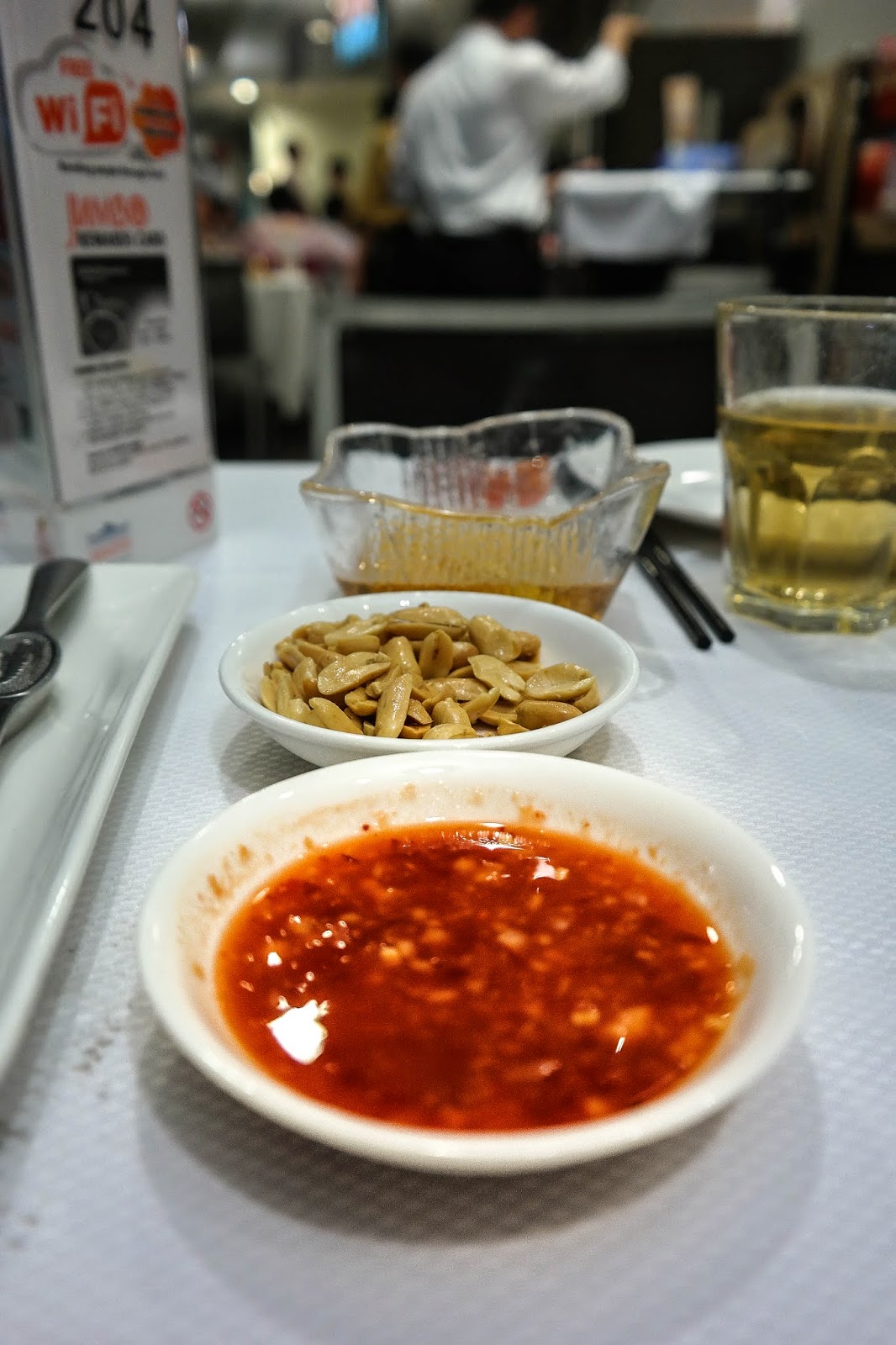 There is something of an ongoing argument that all Singaporeans appear to be engaged in: which is better, chilli crab or pepper crab.  As there were only two of us it would have been impossible to have both, so we really were forced to make a decision – we could only indulge in one.  Given the option I took the very tough decision and plumped for chilli crab.  It was not a decision I would come to regret.

We accompanied our crab with a couple of other bits and pieces from the menu.

First up (and intended as a starter, although the rather sketchy service meant that it actually arrived after the crab) was dragonfruit and lobster salad.  The combination of the tangy fruit and rich meat was fantastic.  I cannot, however, recommend the lashings of mayonnaise that accompanied the dish.  Also, sadly, the lobster meat was bordering on the sparse… 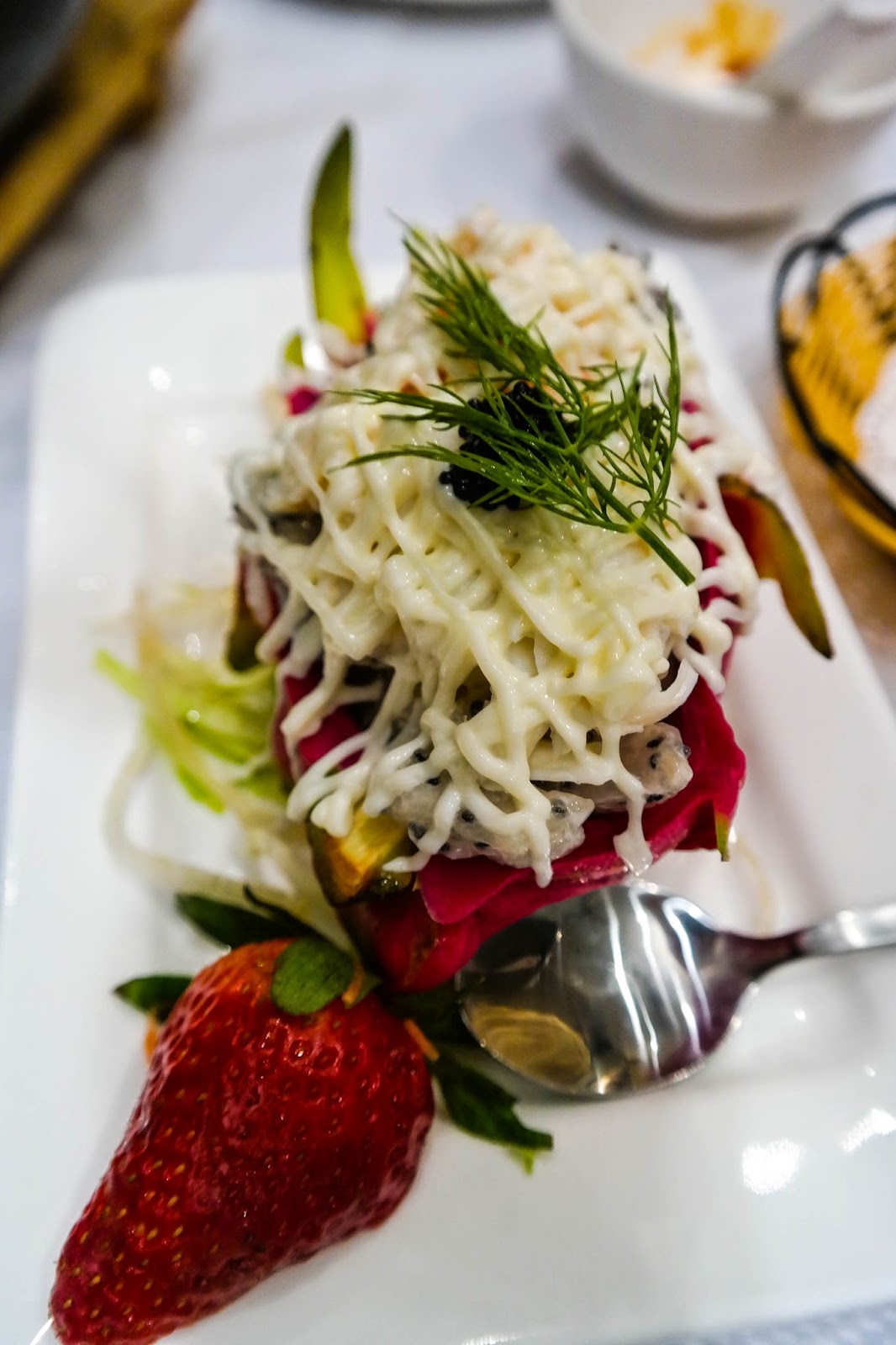 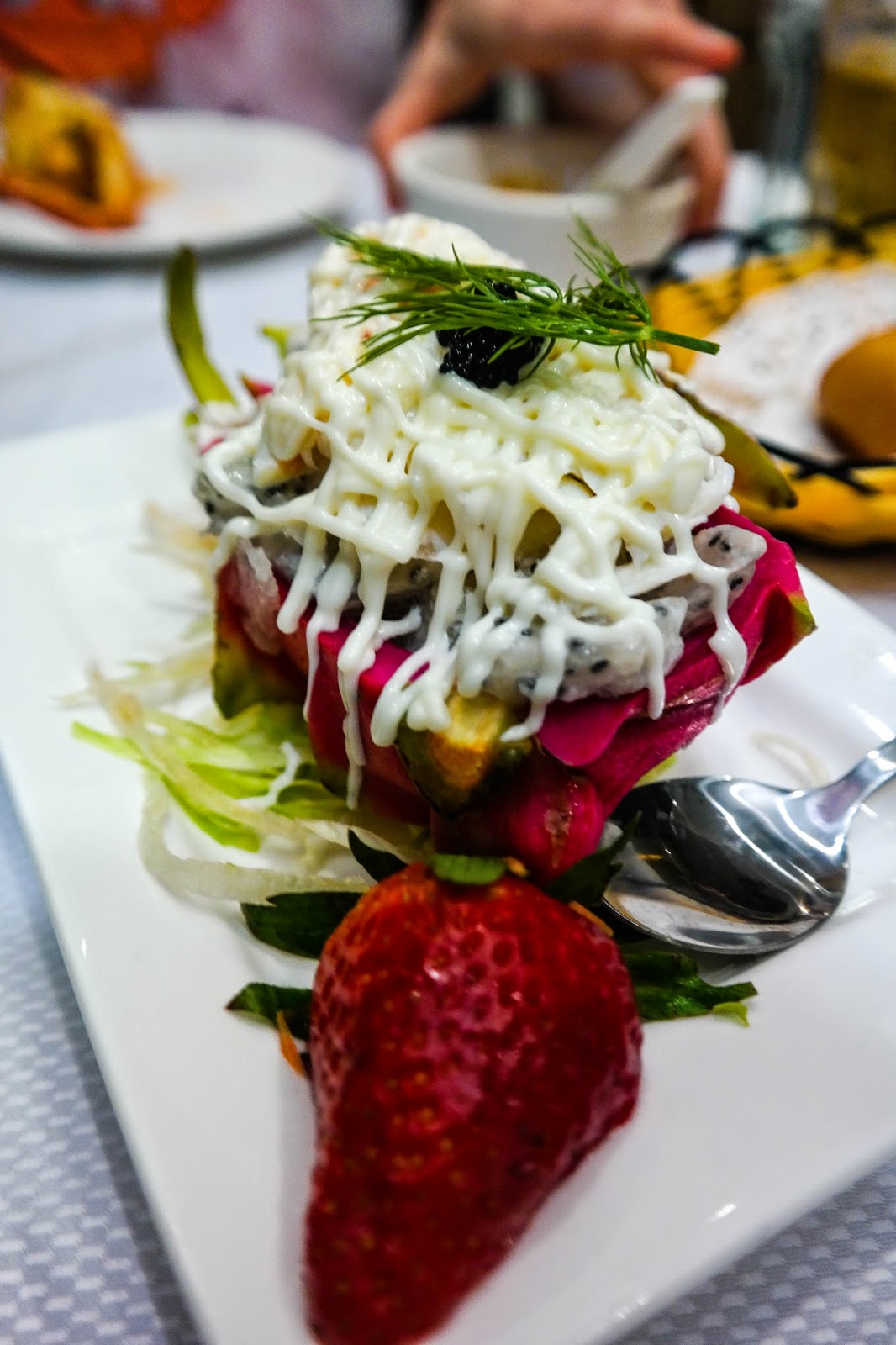 We also ordered up a big dish of peeled oatmeal prawns.  These were fantastic.  No two ways about it.  The prawns are coated in a big helping of panko breadcrumbs and desiccated coconut.  This gave them a sweet, dry, crunchy coating to match the succulent, rich shrimp meat inside.  Astrid warned me off ordering the oatmeal prawns in their shells: if you do so, all the pleasure is lost, as you rip off the crunchy coating to get at the meat inside. 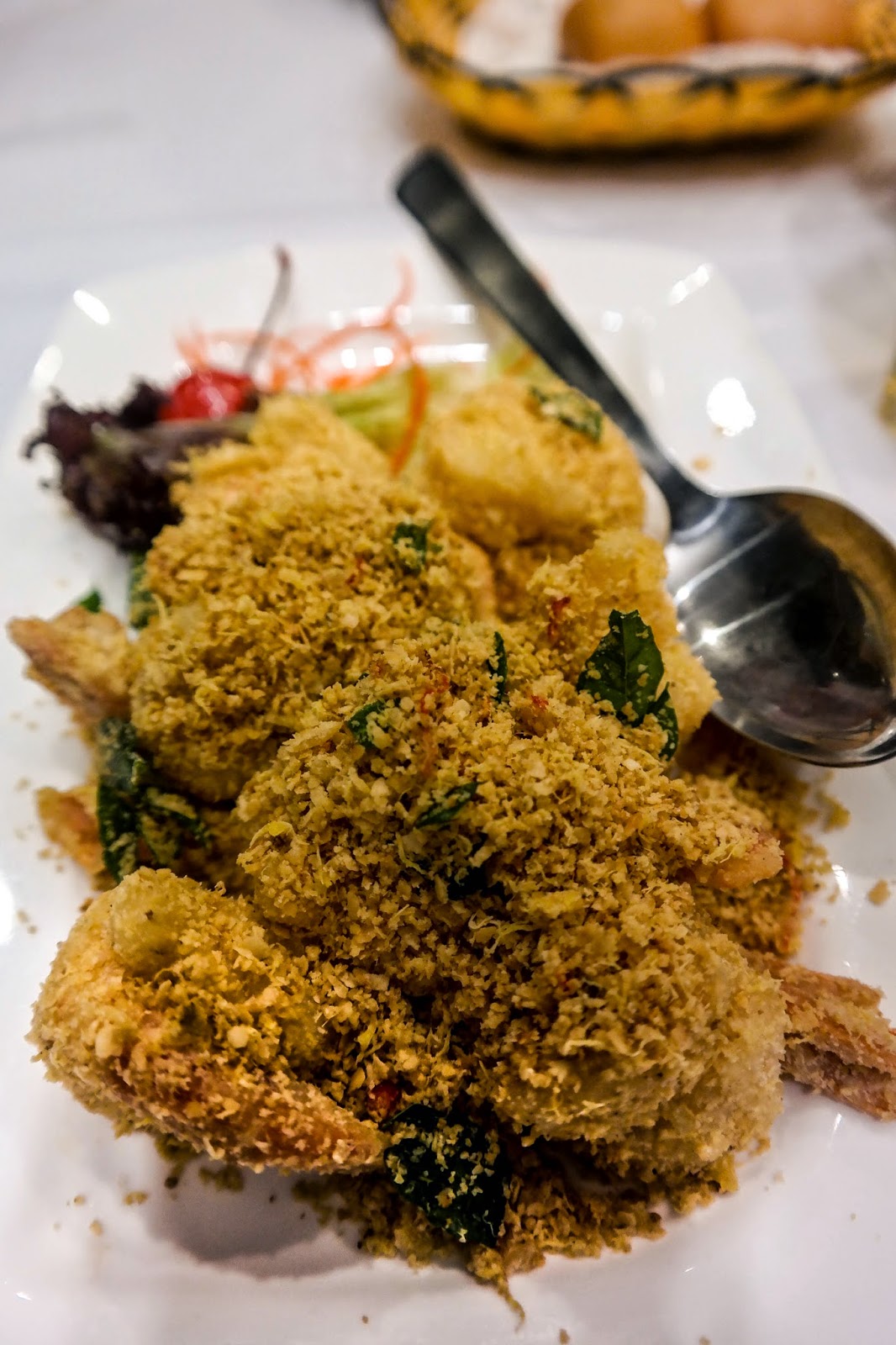 For double the pleasure, by the way, please let me recommend that you take an oatmeal prawn and give it a big dunk in the crab sauce (if eating chilli crab).  It's amazing. 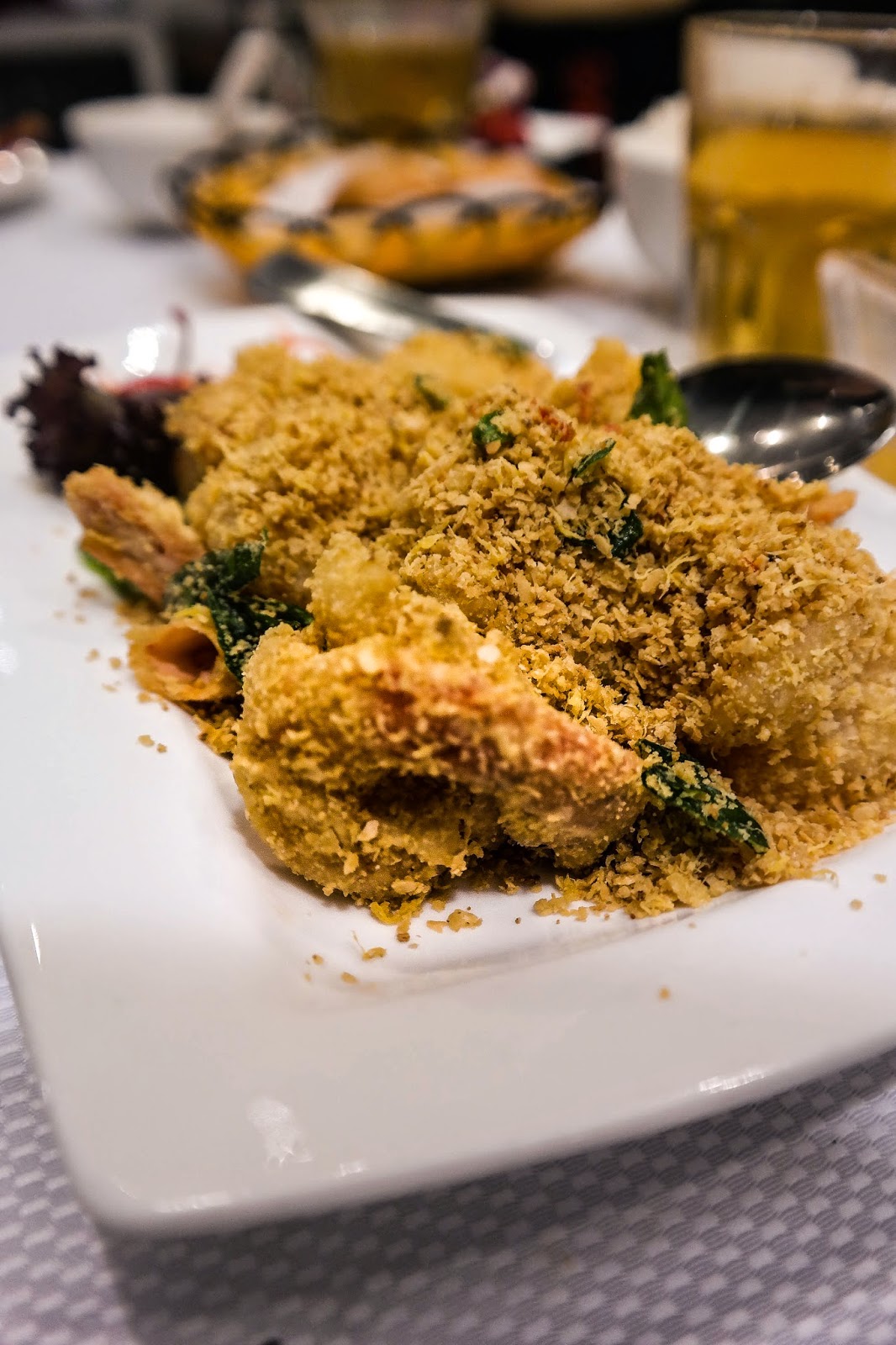 However, all this is so much stuff: the star of the show is the crab.

Now, you know you're in for a treat when the staff bring you bibs.  This was one of those times.  In fact, bibbing is absolutely essential – throw all your pretentions and shame out the window, you need the bib.  In fact, you need one of those biohazard suits, because this is going to go everywhere.  It's not like eating lobster in Maine, where you risk flicking a drop of butter on your shirt.  No, you're going to get sauce everywhere.  So bib up. 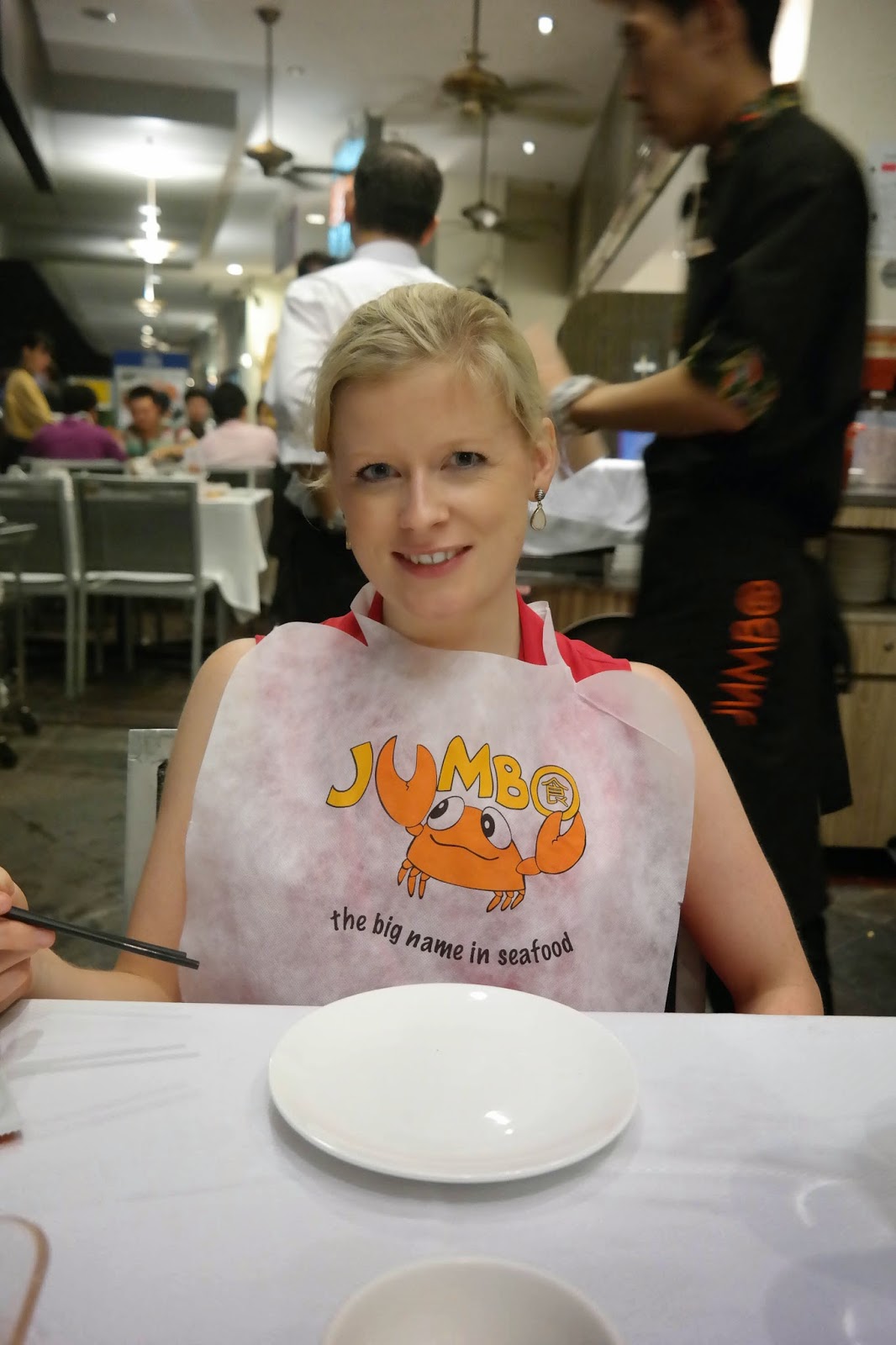 They’re also pretty amusing. In fact, it wasn't long before a bit of entertainment at bib wearing just turned to all-out absurdity. 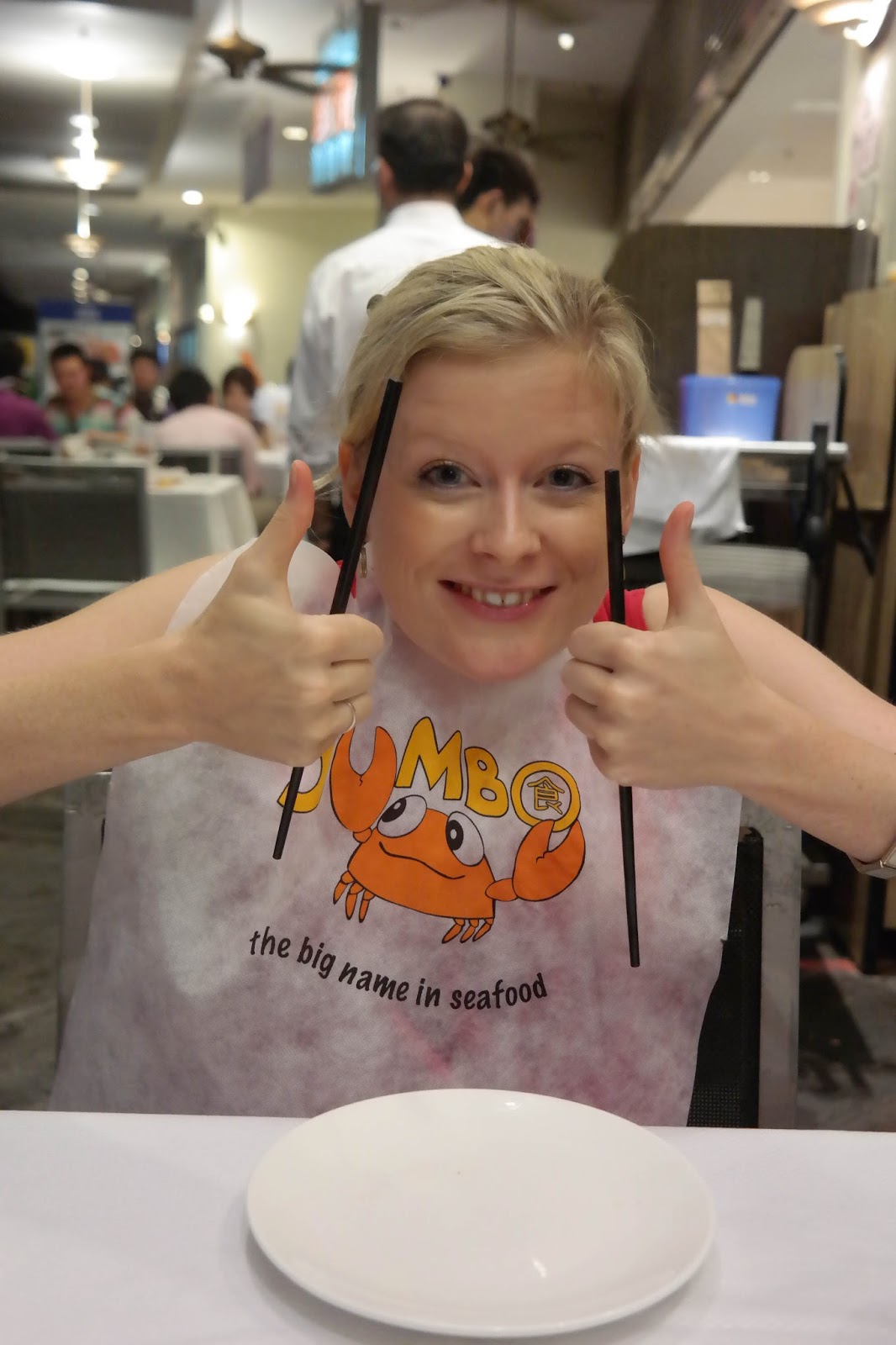 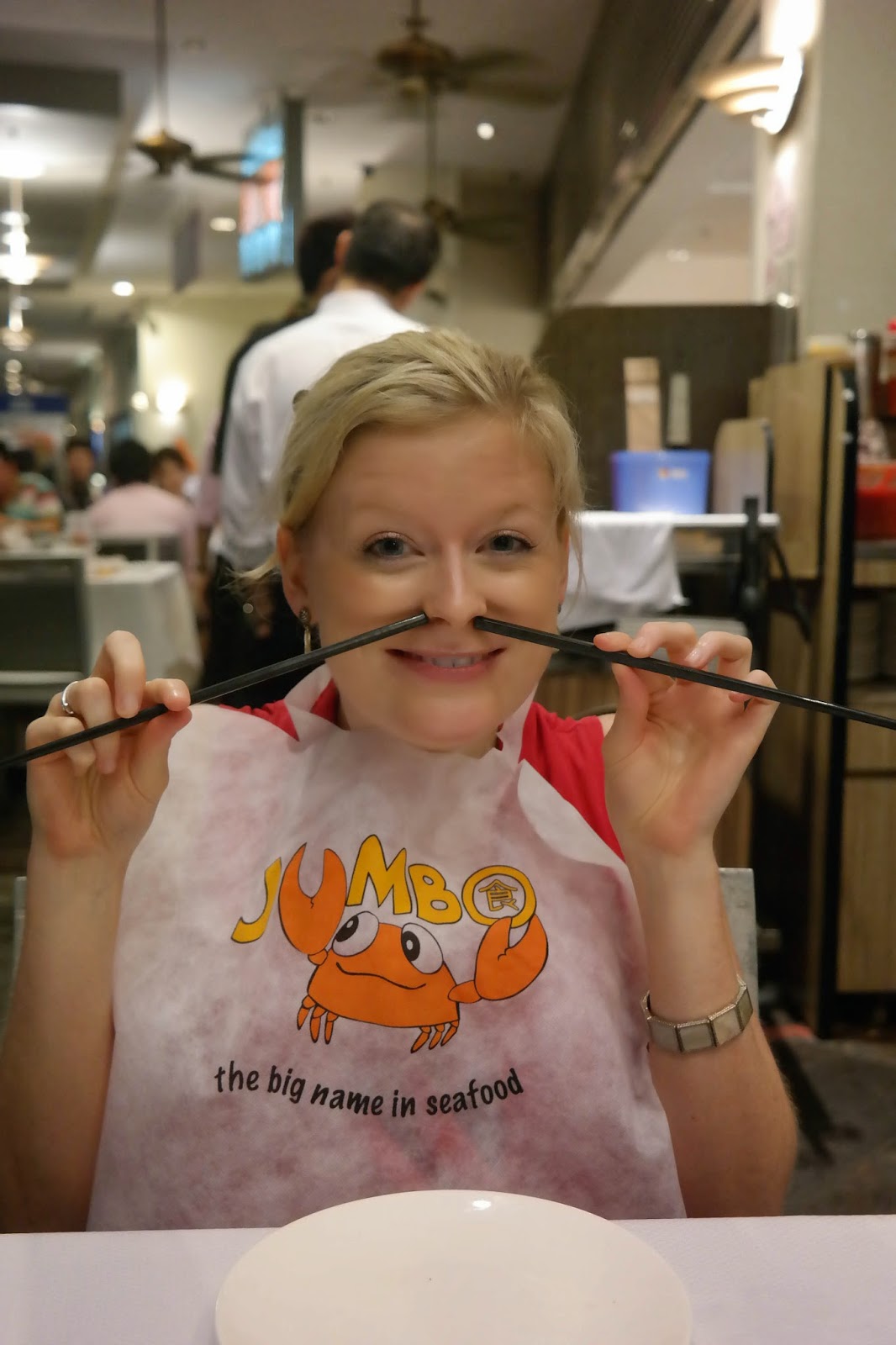 Chilli crab is cooked in a big, hearty red sauce.  The crab is trimmed, chopped and chucked in in pieces, so that it cooks in the sauce.  Presumably the brown meat seeps out of the head to mingle with the sauce, which is a rich tomato, garlic, egg and peanut concoction.  Don’t be put off by the moniker either – whilst there's a definite chilli flavour and a kick of heat, it's really quite mild. 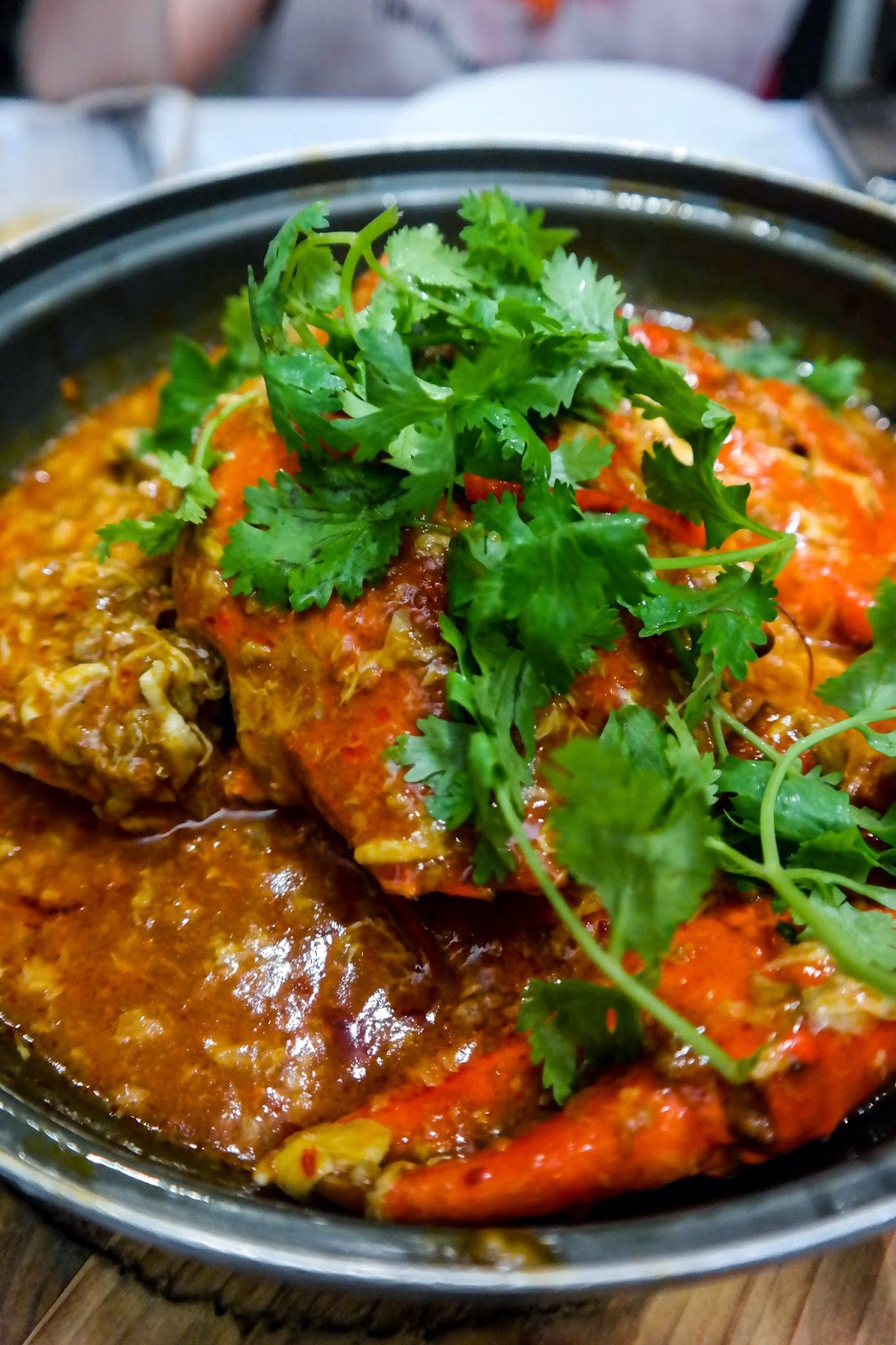 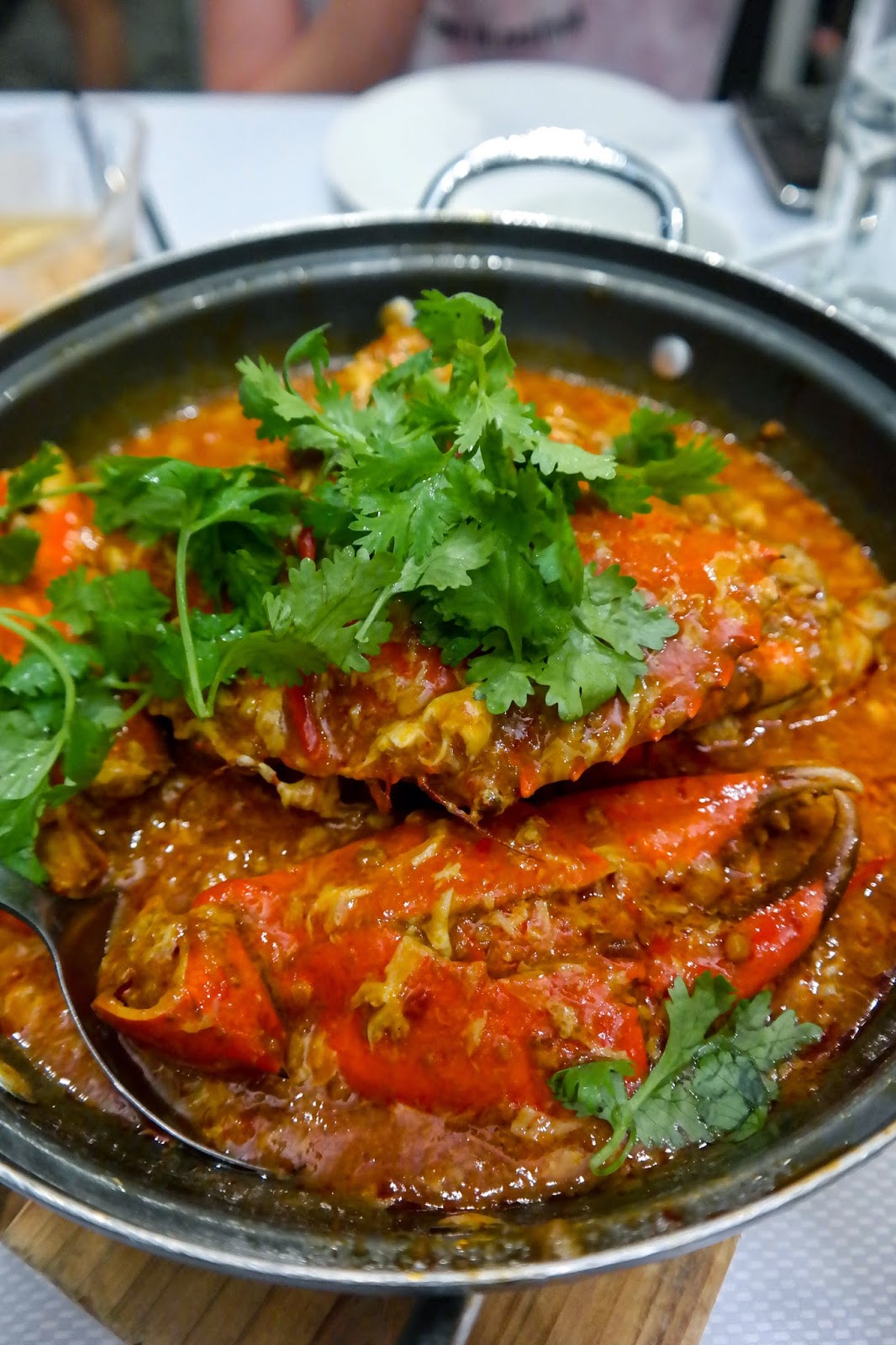 I loved this stuff. Absolutely loved it. I mean, I love crab – and, in fact, most shellfish (and all shellfish with legs). This was a revelation. You see, I'm usually one for banishing sauces. Steak tastes better, for instance, without hiding its flavour behind ground peppercorns and cream. Battered cod is not improved by lathering it in mayonnaise, tarragon and pickles, or drowning it in vinegar, or coating it in sugary tomato paste. Sauces should be, at best, a compliment, not a feature.

But here, however, it is the dish. It is its heart and soul. The sauce is every bit as much a feature as the crab. You're ordering sauce, like one might order soup, and being grateful that it comes with beautifully tasty crab meat at the same time. Because the sauce is flipping brilliant and as much part and parcel of the dish as the crustacean it accompanies. 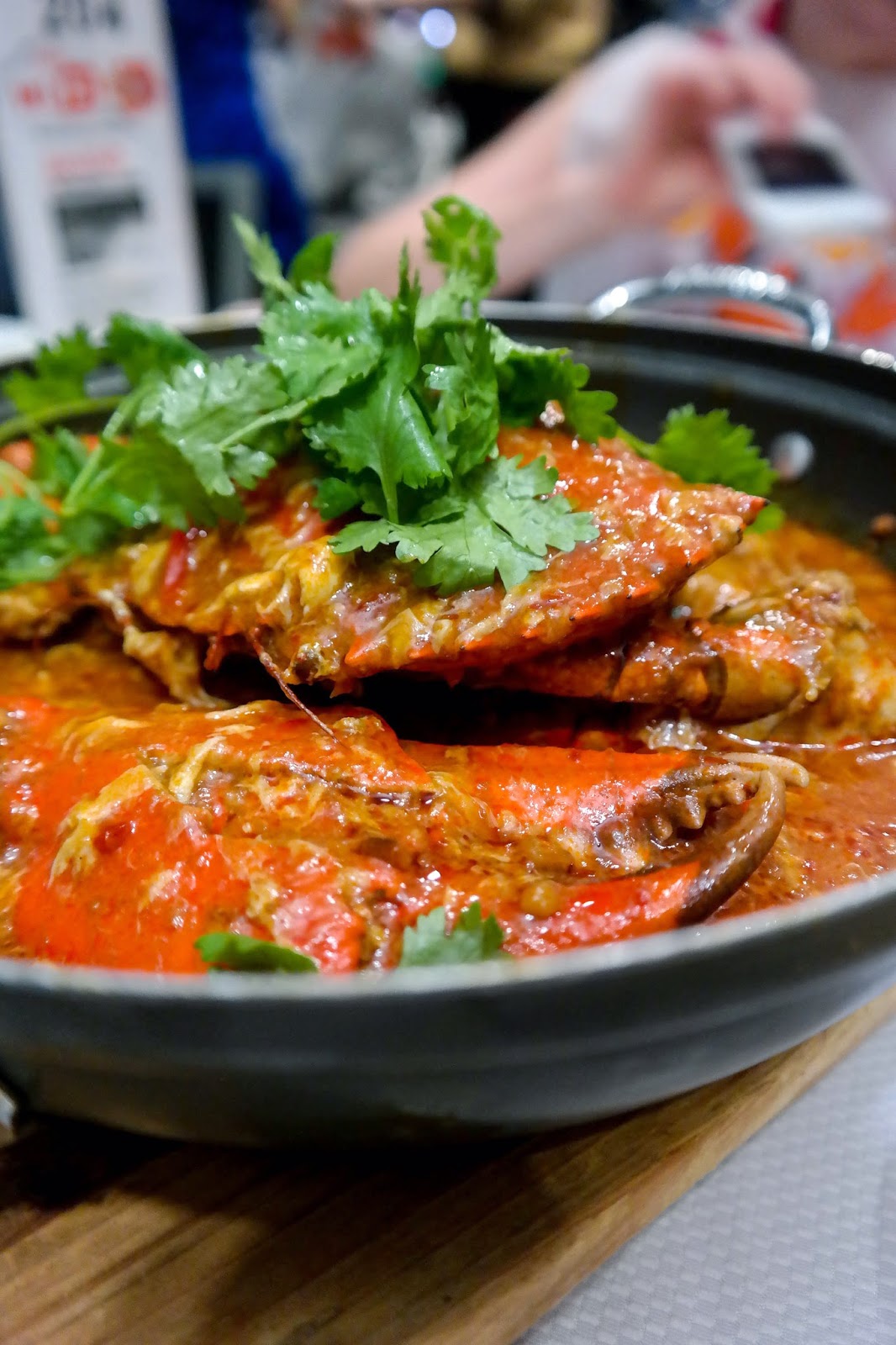 And Astrid was right.  Crab eating – at least, chilli crab eating – is an essential 'must-do' for any foodie visiting Singapore
- GrubsterBoy -
Posted by Grubster Boy at 11:00