Beefsteak Bacchanalia at the Fat Bear

So here's a question: When an email pops up in your inbox offering infinite steaks at a beefsteak bacchanalia, what is the correct response?  Well, obviously, book yourself a spot at The Fat Bear's beefsteak bacchanalia event - which generates you the amusingly entitled ticket typer "Mountains of Beef".  Sounds like my sort of thing.

The Fat Bear is situated in the upstairs rooms of The Rising Sun pub, an ale house in the quite backstreets just a couple of minutes stroll from the hustle and bustle of St Paul's Cathedral.  We've been in before, actually - way back, before it was the Fat Bear, GrubsterGirl and I visited when the upstairs rooms were B.O.B.'s Lobster's pop-up.  Pretty much since then, however, the Fat Bear has been in residence, moving from a pop-up to more of an established restaurant in its own right. 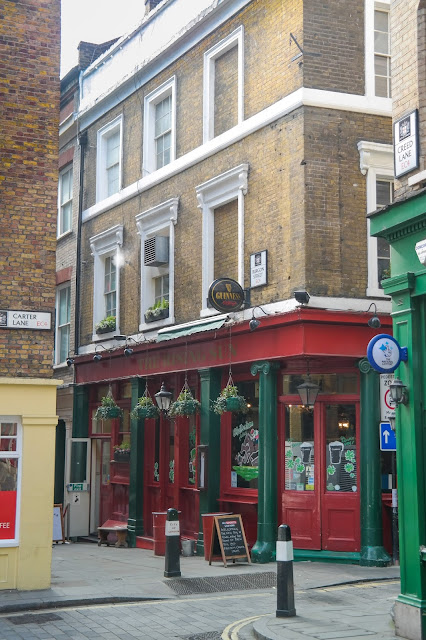 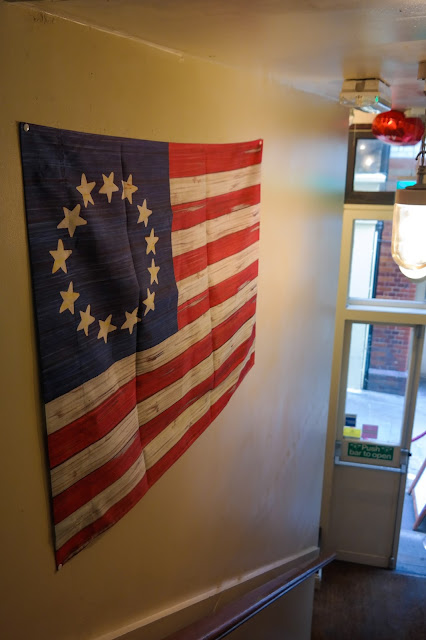 First up, there's a fully stocked bar - with, in the far left of the picture, the largest section cocktail bitters I have ever seen.  There's clearly a great deal of passion, commitment and professionalism behind the mixology here.  From the house creations to the classics, the drinks at the Fat bear are excellent. 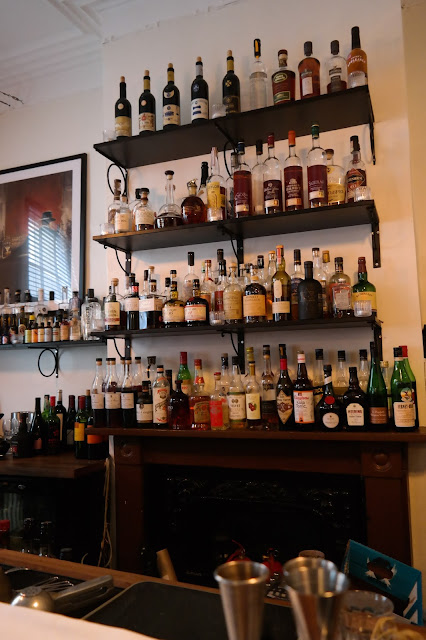 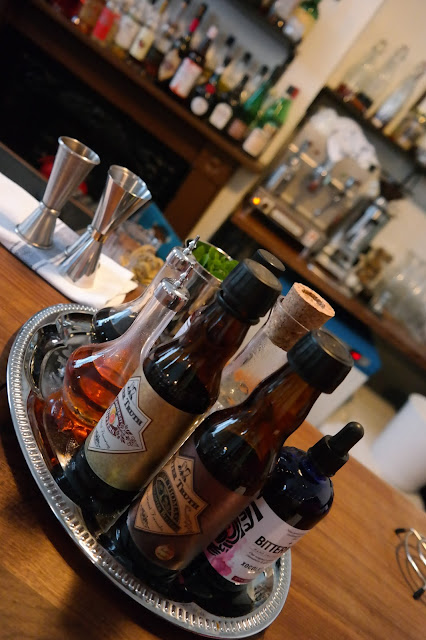 GrubsterGirl started with the self-styled "Really Bloody Good Martini@ - served wet, which effectively means a larger measure of vermouth than usual.  This was delicious, a complete revelation - the use of Cocchi Americano (a more authentic substitute for Kina Lillet in a Vesper, if you're interested) was fantastic and really changed the drink.  Thinking back, actually, to Dry Martini in Barcelona, their historic martini recipe used half-and-half gin and vermouth.  Whilst I would't go that far (and they haven't here) I can certainly see why a larger measure of vermouth can, in the right context, work pretty bloody well. 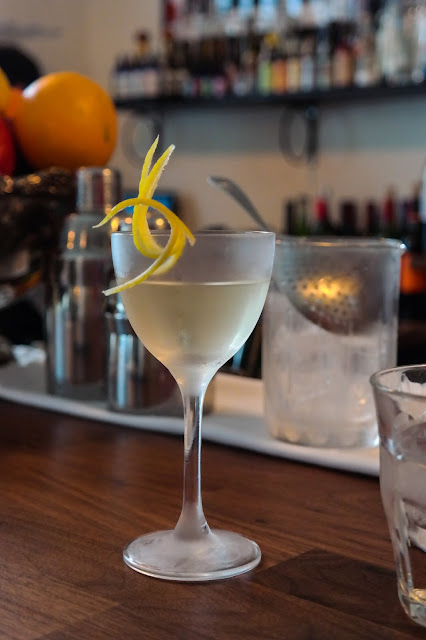 I had a Problem Solved, a combination of rye whiskey and cherry Heering.  I do love a good whiskey cocktail, and this was no exception.  Complex and family sophisticated - my only note is that it might have been better at the end of the meal, being a bit sweeter.  But excellent generally. 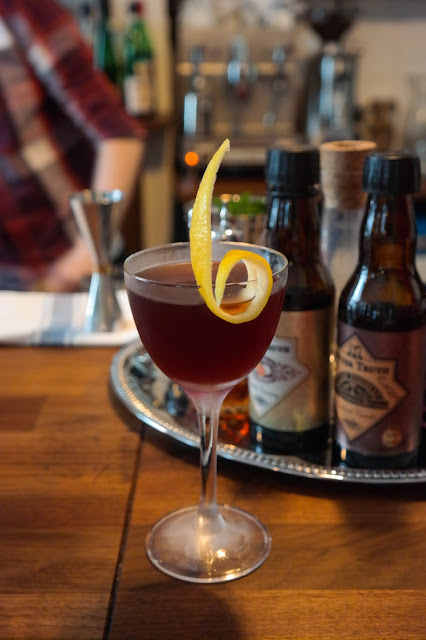 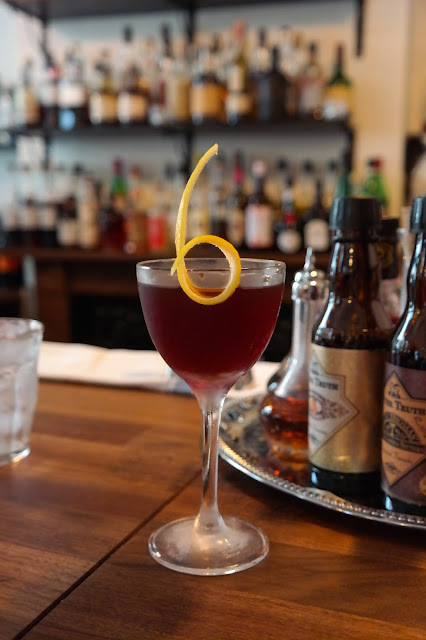 Round 2 (when did we ever limit ourselves to one) for GrubsterGirl was the 1934 Cosmopolitan.  Using a more traditional array of ingredients, this was seriously good.  A great twist on a classic. 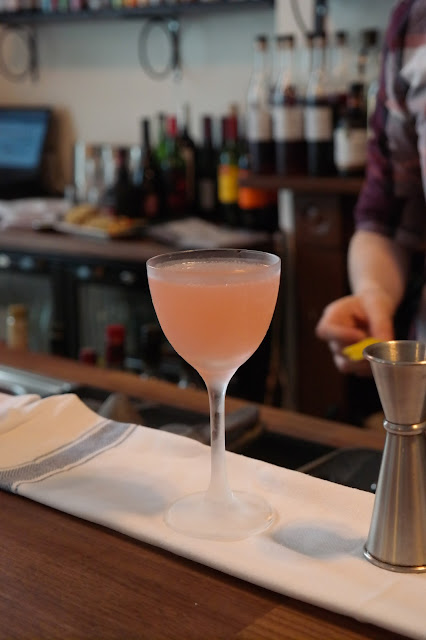 It is also quite possibly the prettiest drink I've ever seen. 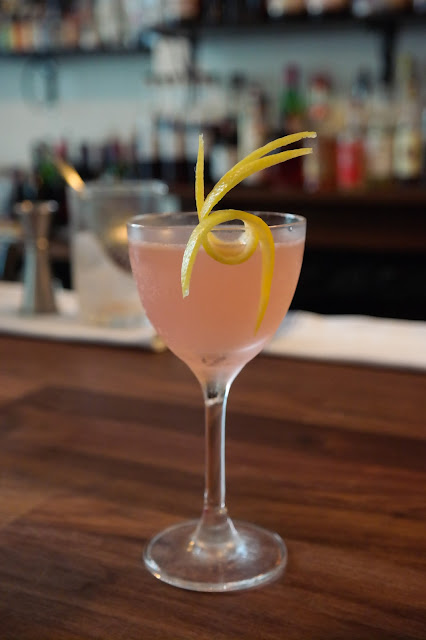 I'm going through a bit of a Negroni phase at the moment, so thought I'd see if they could knock one up for me - which was done to great aplomb.  The barman's personal house blend of red vermouth - a combination of Martini Rossi and Carpano Antica - it makes a brilliant drink.  I was also advised to have it straight up, rather than over ice, on the basis that it would avoid dilution and that further flavours would come out over time. 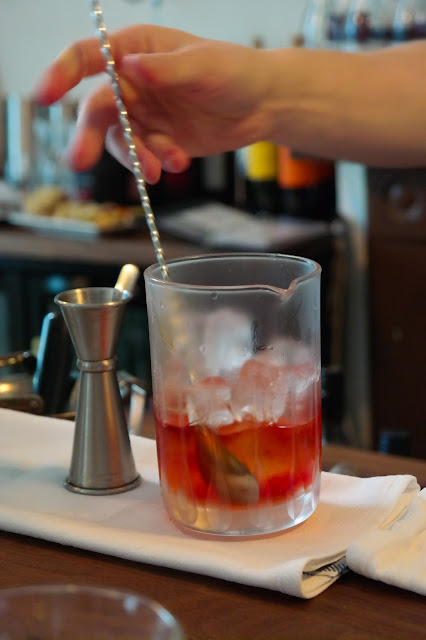 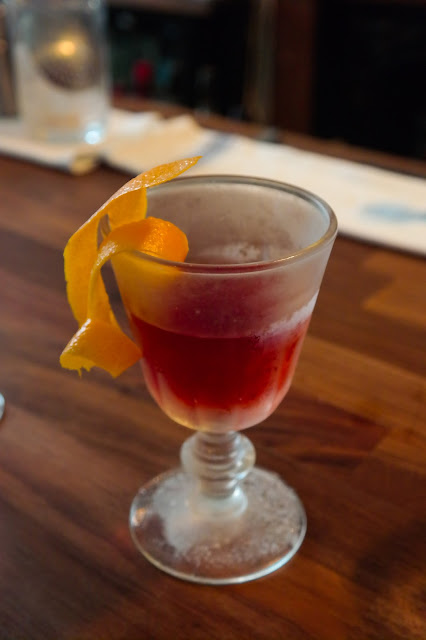 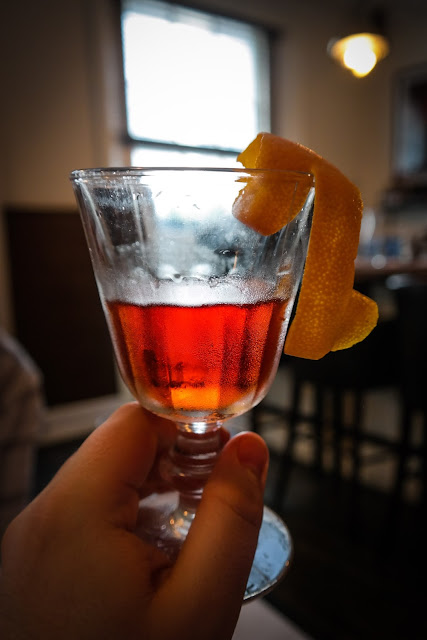 Then onto the food.  The event was held around large, communal tables, which is always fun.

On the tables were pots of quick, mixed pickles - all of which I expect had been made the same day, so were beautifully fresh and crisp, and mixed in a sweet vinegar brine.  Perfect as a palate cleanser. 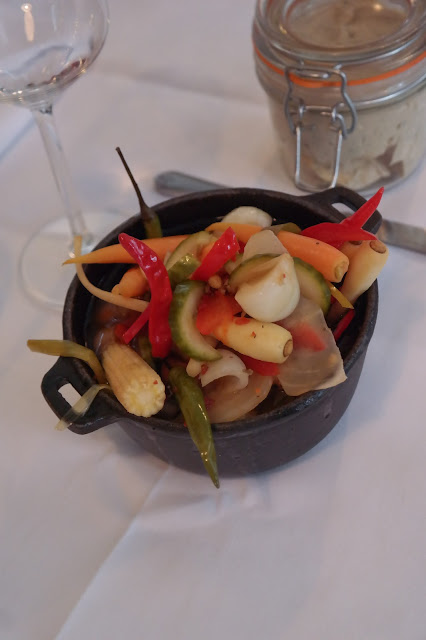 Also available was a bone marrow whipped butter.  No two ways about it, this was incredible. 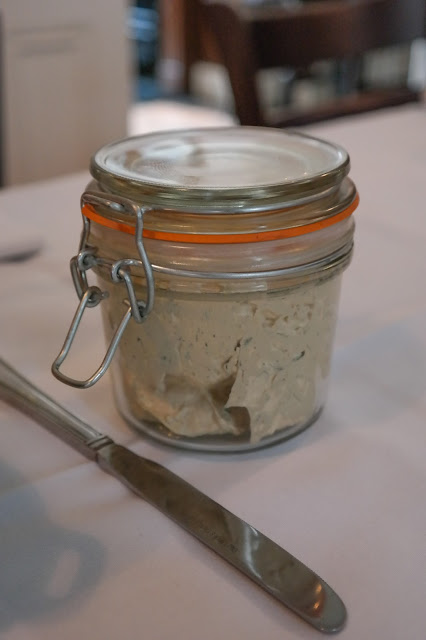 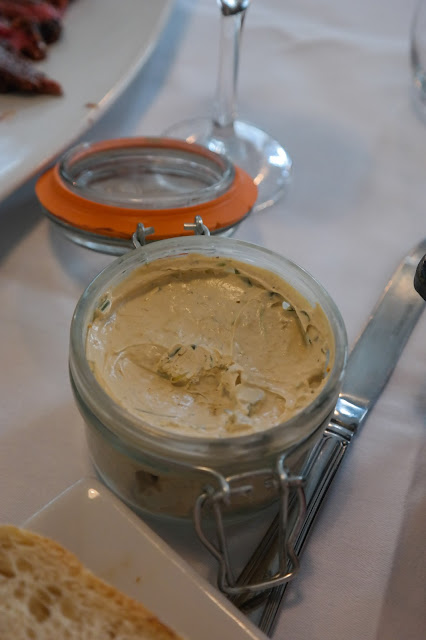 Then the meat started coming out.  And it didn't stop.

Smoked brisket with a devilled gravy on toast.  Deeply, deeply smokey - but avoiding the over-sweatness that most brisket is dredged in. 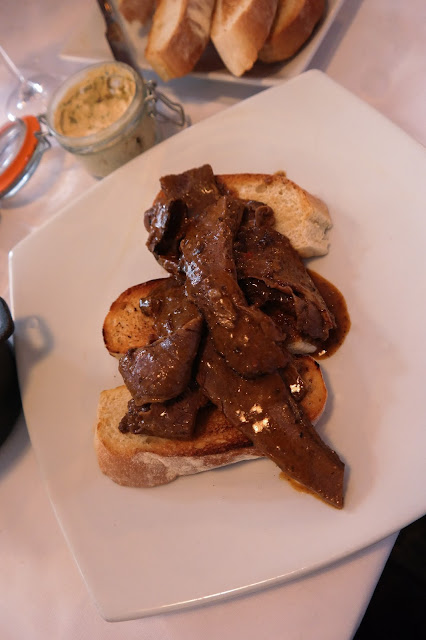 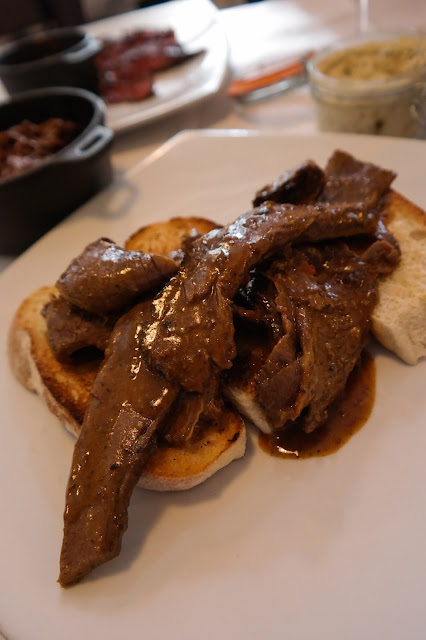 Pulled brisket in BBQ sauce.  Perfectly done, the meat was still moist and had been cooked to perfect tenderness.  The sauce was good as well - classically BBQ, but not too sticky or cloying. 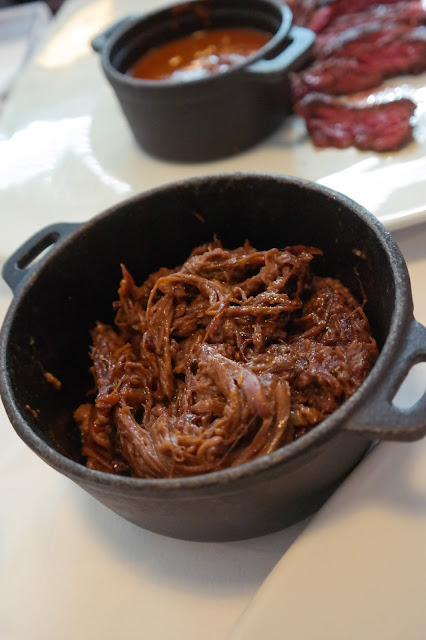 The star of the show, in our view: Korean-marinated onglet with a Korean inspired dipping sauce.  This was a proper steak.  Cooked rare - very rare in some cases - which was smashing, and it was wonderfully tender and tasty.  The marinade also shone through and perfectly set-off the beef. 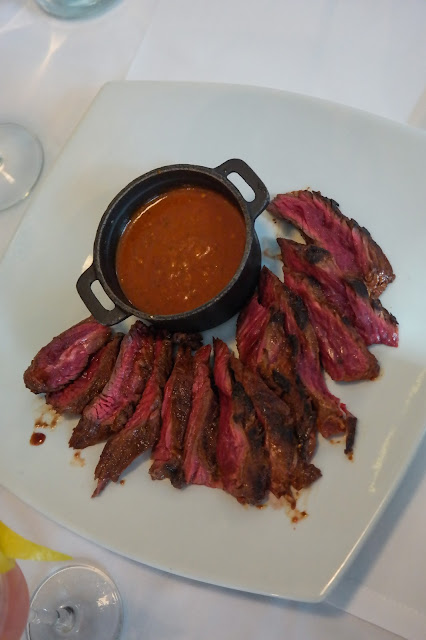 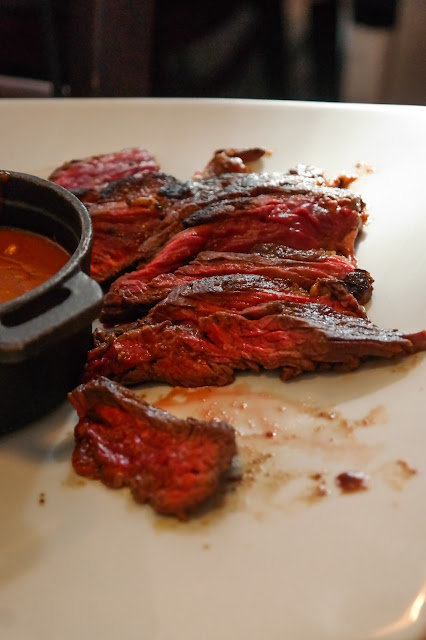 Hot link sausages.  Perhaps slightly more chorizo-esque than I would have expected, they were nevertheless great. 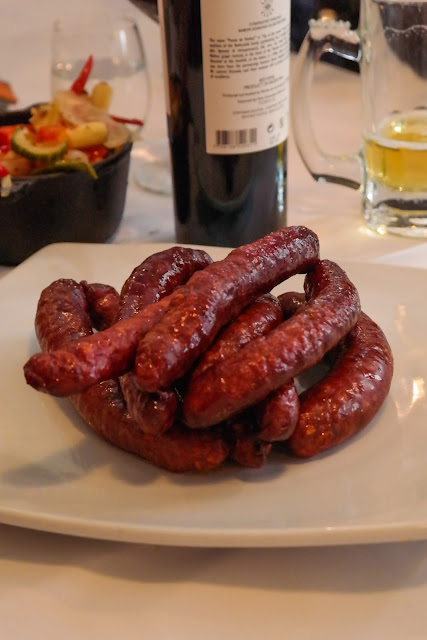 ...round two.  Seriously, that lot wasn't enough between two?  Fine, here's the next batch.  We were pretty much driven to a standstill by now, but bravely had a good stab at our next round.  I have no idea if it would have kept coming, but I expect it would have.  You need to be pretty hungry...! 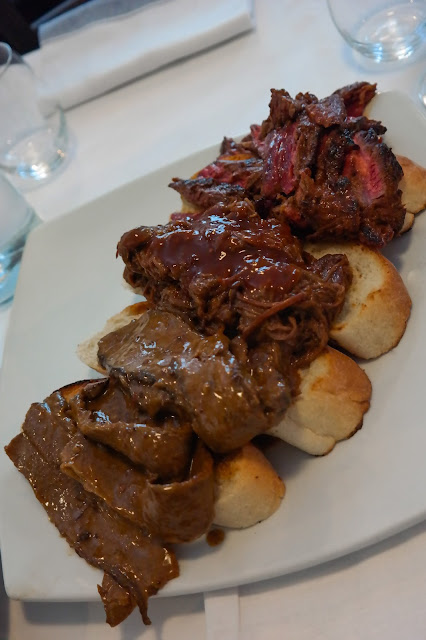 After a lot of food, though, there really is only one cure: more cocktails.  I had a classic old fashioned, made with Buffalo Trace, that was expertly put together. 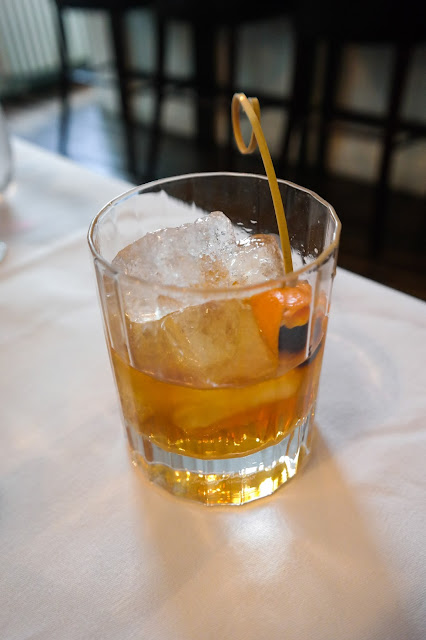 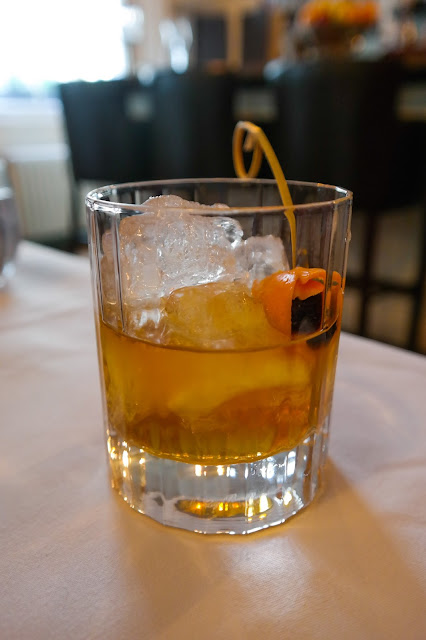 Whereas GrubsterGirl had another house cocktail, the Pendennis.  This was a gin, lime and apricot liqueur concoction that was good - if perhaps not as good as the very excellent 1934 Cosmo GG had enjoyed earlier. 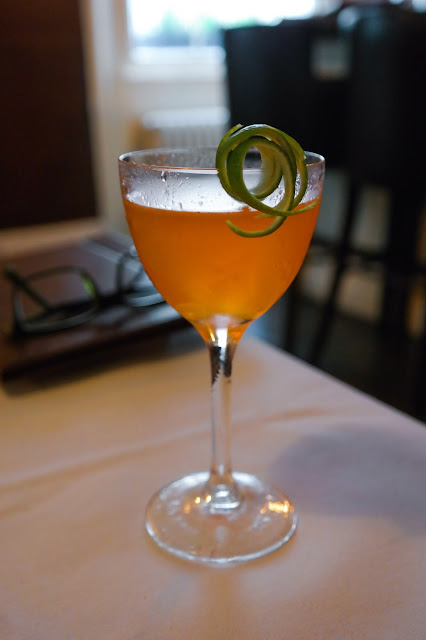 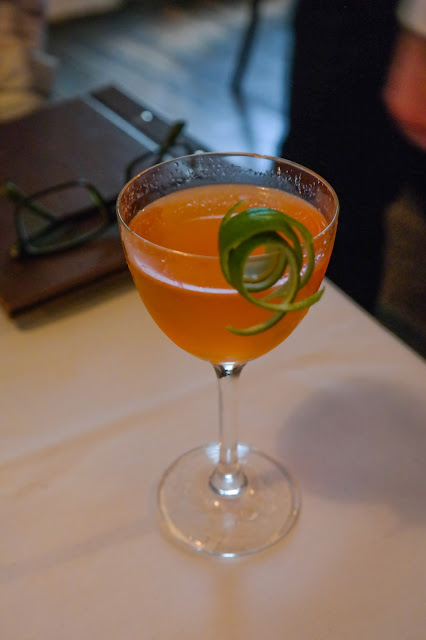 And with the bill?  Well, just to finish off: a quick round of classic pricklebacks - a shot of bourbon chased immediately by a shot of sweet pickling liquor.  Perfect ending to such a heavy meal. 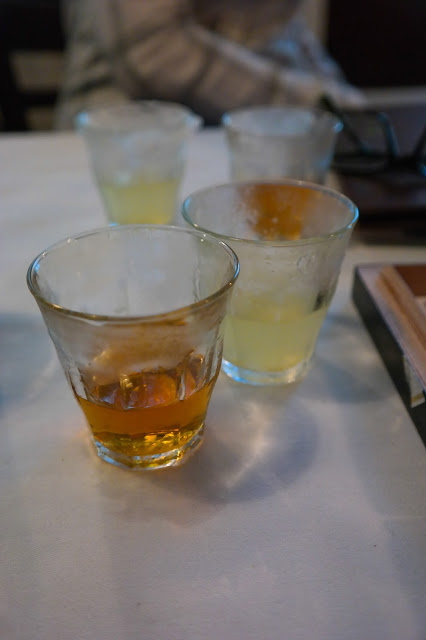 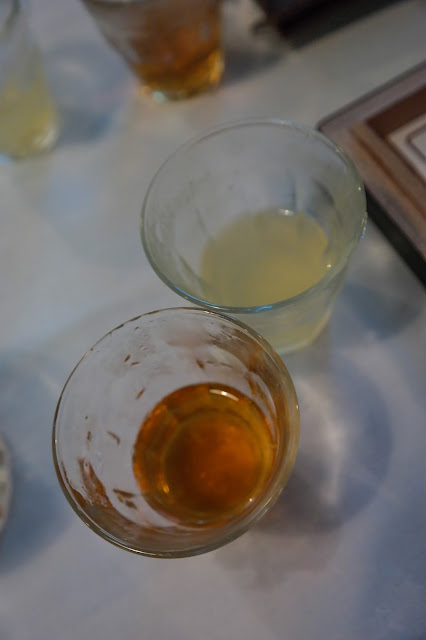