What on earth is Flesh & Buns?
A difficult question.  They describe themselves as:
"…the new Izakaya restaurant from Bone Daddies"
Not being, clearly, down enough with the kids to understand what izakaya is, I Googled it.  The resulting definition comes from that fountain of all knowledge, Wikipedia:
"An izakaya (居酒屋) is a type of Japanese drinking establishment which also serves food to accompany the drinks. They are casual places for after-work drinking."
I'm still no closer to the truth.  What's more, even having been there, I can’t give you a precise answer.
One thing I do know about Flesh & Buns is that it is achingly trendy.  The place, a converted wine cellar (or somesuch) located under the Donmar was relatively quiet when we got there – a civilised 8 o'clock – but absolutely heaving by the time we left, a couple of hours later.  It's low lit, loud music, even louder chatter, and long, room-length tables stretching from a cocktail bar at the front to a semi-open plan kitchen at the back.  There are a few smaller tables, which one can book for parties of six or so, dotted around the periphery, but the main action seems to take place on the long, high tables.
GrubsterGirl and I kicked off proceedings, in our usual way, with a couple of rounds of cocktails. 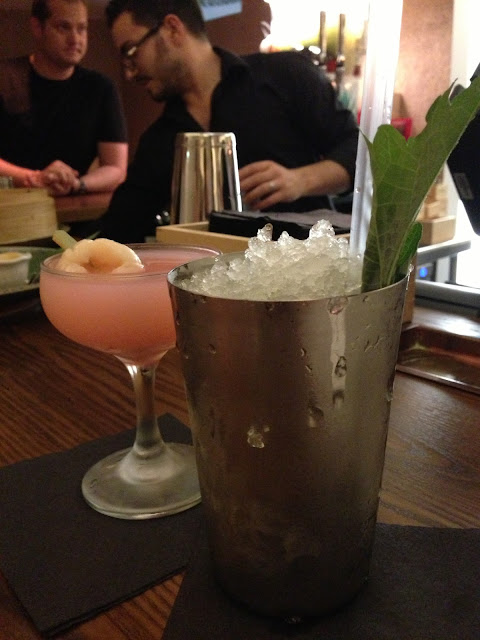 To start, she had a Lychee and Pomegranate Martini, which was lovely, sweet and tasted of its signature components.  My Shiso and Pink Peppercorn Julep was nice enough as a drink – I enjoy a julep, as it happens, so can't really complain – but tasted of neither shiso (a Japanese herb, and that big leaf sticking out the top of the picture) nor pink peppercorns, which was a touch disappointing.
Never ones to leave a job half done, we went in for a second round. 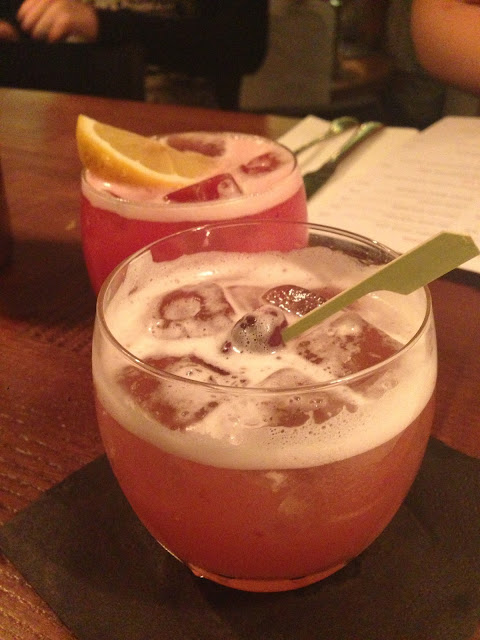 GrubsterGirl had the Peach Blossom Sour and I had the Nikka Cherry Sour.  Both were yummy, so no complaints there.
Later on, however, GrubsterGirl also had a Frozen Yuzu Margarita (to make up for a screw up of the order).  Now, I've had to check what yuzu is (it turns out that it's a small, oriental citrus fruit used heavily in Japanese and Korean cuisine – who knew?), but it tasted to me just like a normal, frozen margarita.  Which is a bit of a shame.  And it wasn't helped, I don’t think, by having been squeezed out of a bloody great big ice churner.
Food-wise, they offer a batch of starters, some hot, some cold, and then a list of 'flesh and buns'.  These are standard main dishes, each accompanied by dim sum steamed buns and some salad.
We started with the mixed sashimi and tuna tataki, sharing both.  Really top notch dishes, I loved both.  The sashimi was as fresh as it needs to be, and offered a nice mix. 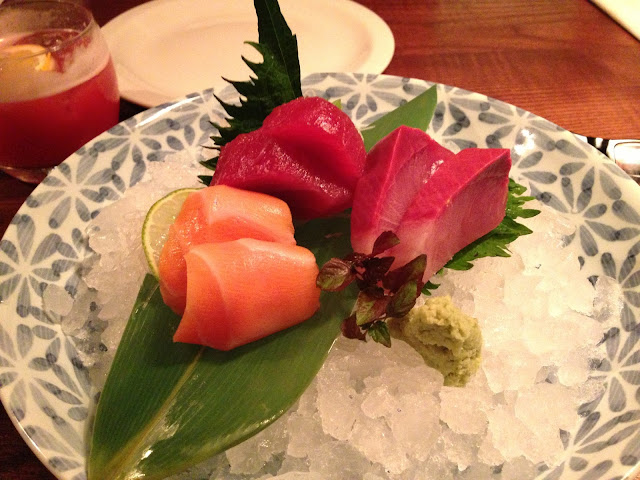 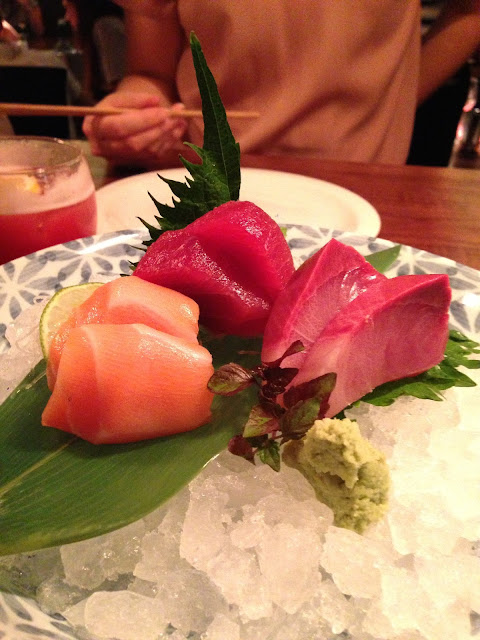 The tuna, however, was first class.  Really nicely put together, well charred on the outside, and accompanied by a flavoursome sauce that avoided just being soy and spice. 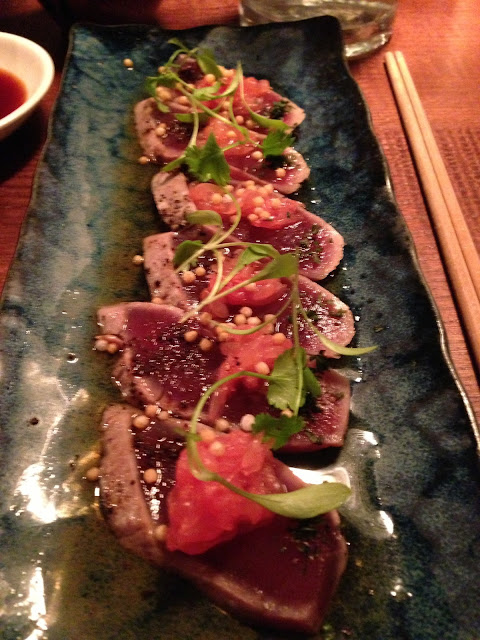 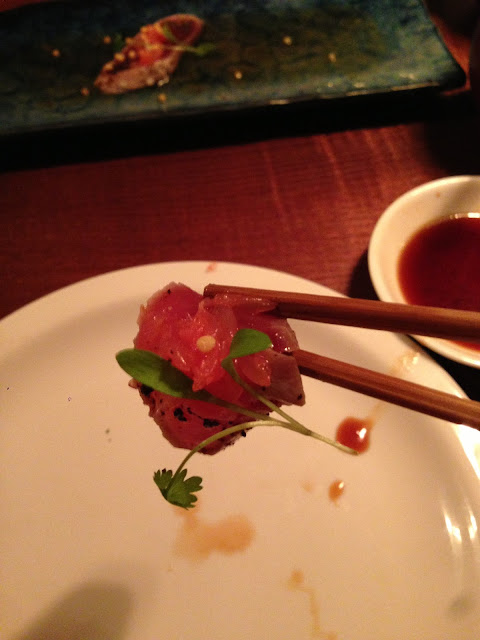 The main courses started well.  The flat iron steak with BBQ sauce, accompanied by pickled shimeji was divine, and sat nicely in their little buns. 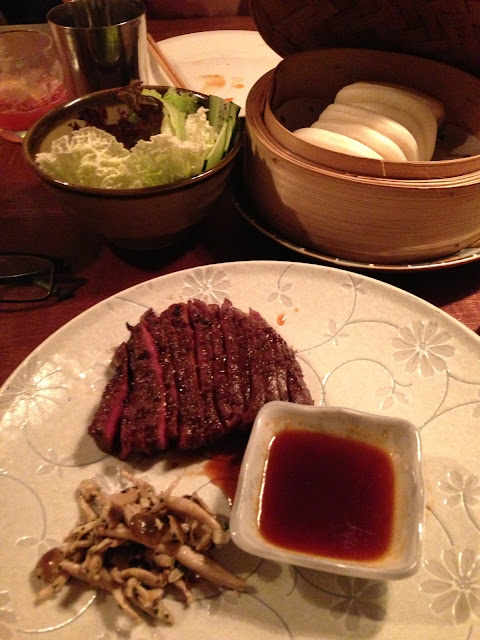 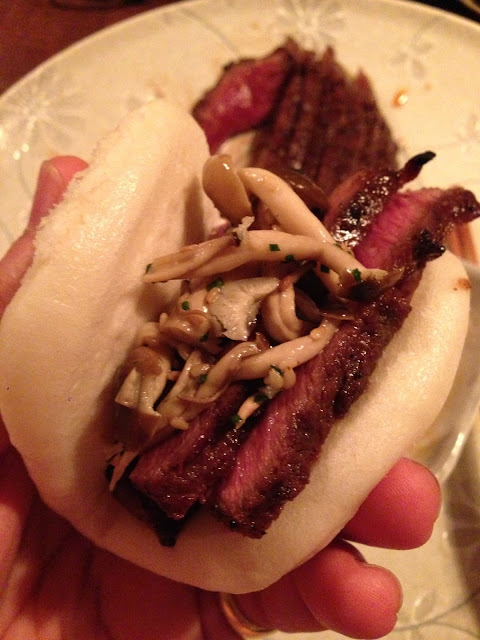 GrubsterGirl chose the crispy duck leg with sour plum sauce, accompanied by turnip pickle.  This was slightly disappointing.  It felt like a dish without much effort: simply roasted duck leg, allowed to speak for itself rather than being seasoned, spiced and flavoured. 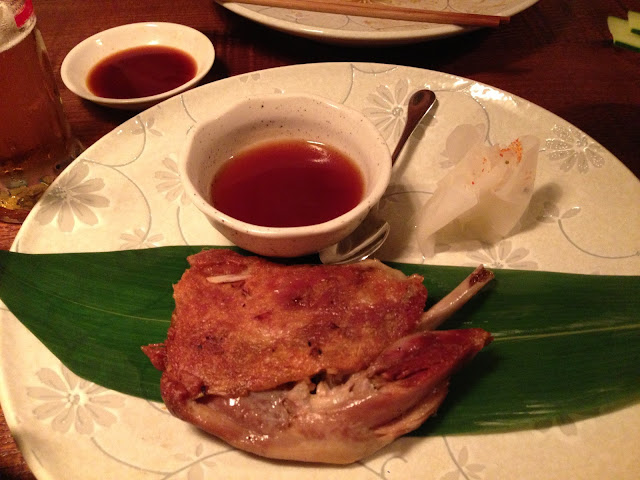 So all good so far?
Well, kind of.  The food was good, the drinks decent, but the service was shocking.  Slow and often wrong.  Things failed to arrive at once, meaning cold buns being eaten with hot flesh – less than ideal.  I wondered at one stage if the staff struggled to hear in the noise, but one way or another it was a little poor.
It wasn't cheap, either: the bill came to £90 for two people (after they had taken off the things we weren't supposed to be charged for…) without pudding.
However, my real gripe with Flesh & Buns is how tight they are with the buns.  Because you get two.  And that is it – no matter how many dishes you order.  Which means that you simply have to order more, and they know that – so any dish marked as £15 is actually £17.50 because you have to factor in ordering more buns.  Given that the cost of producing those little suckers must be minute, that sort of attitude just feels a little cheap.  Which is a shame, because otherwise I reckon I'd have liked the place.